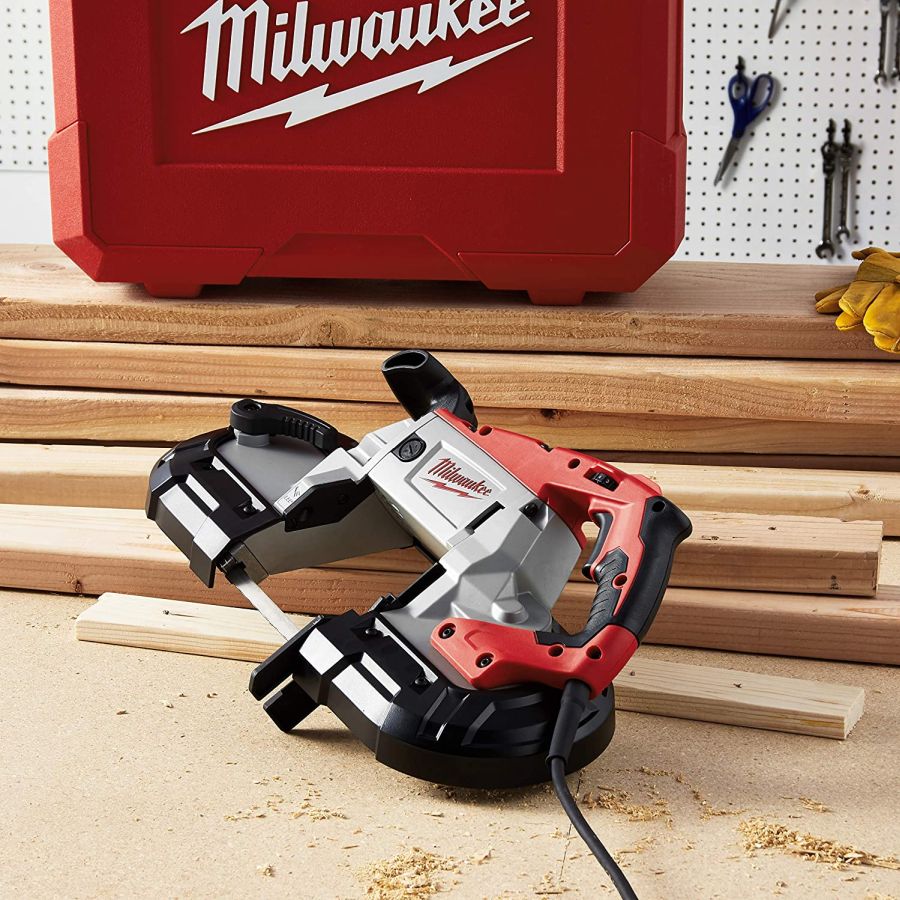 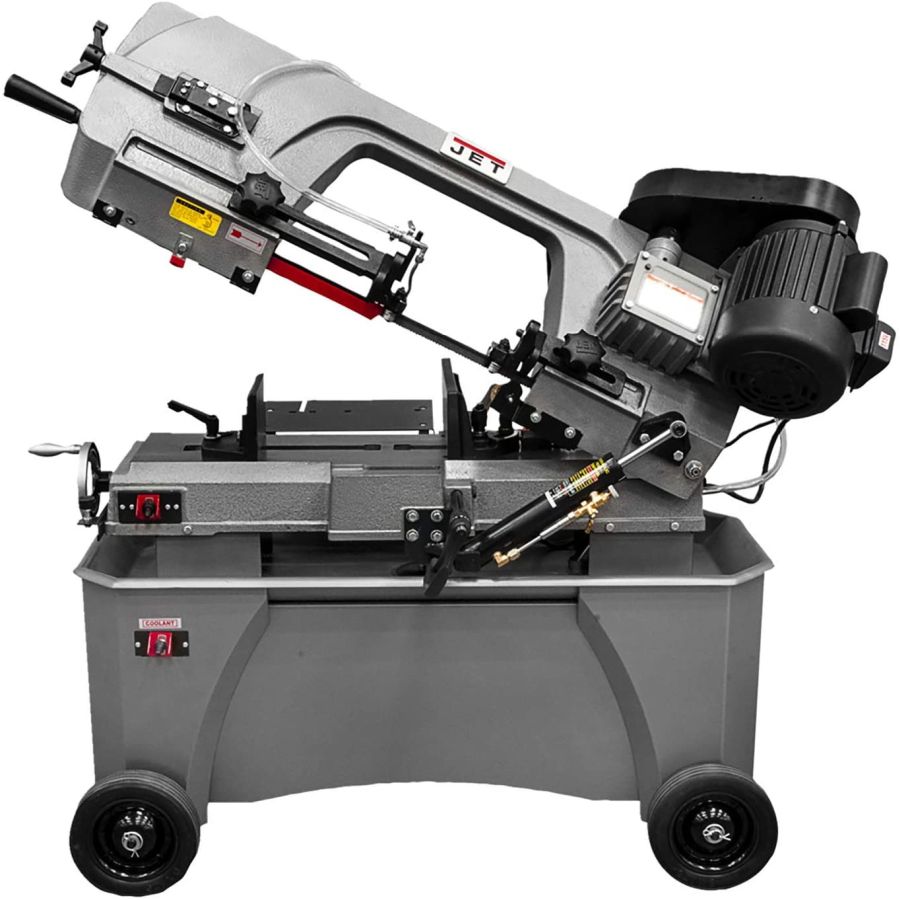 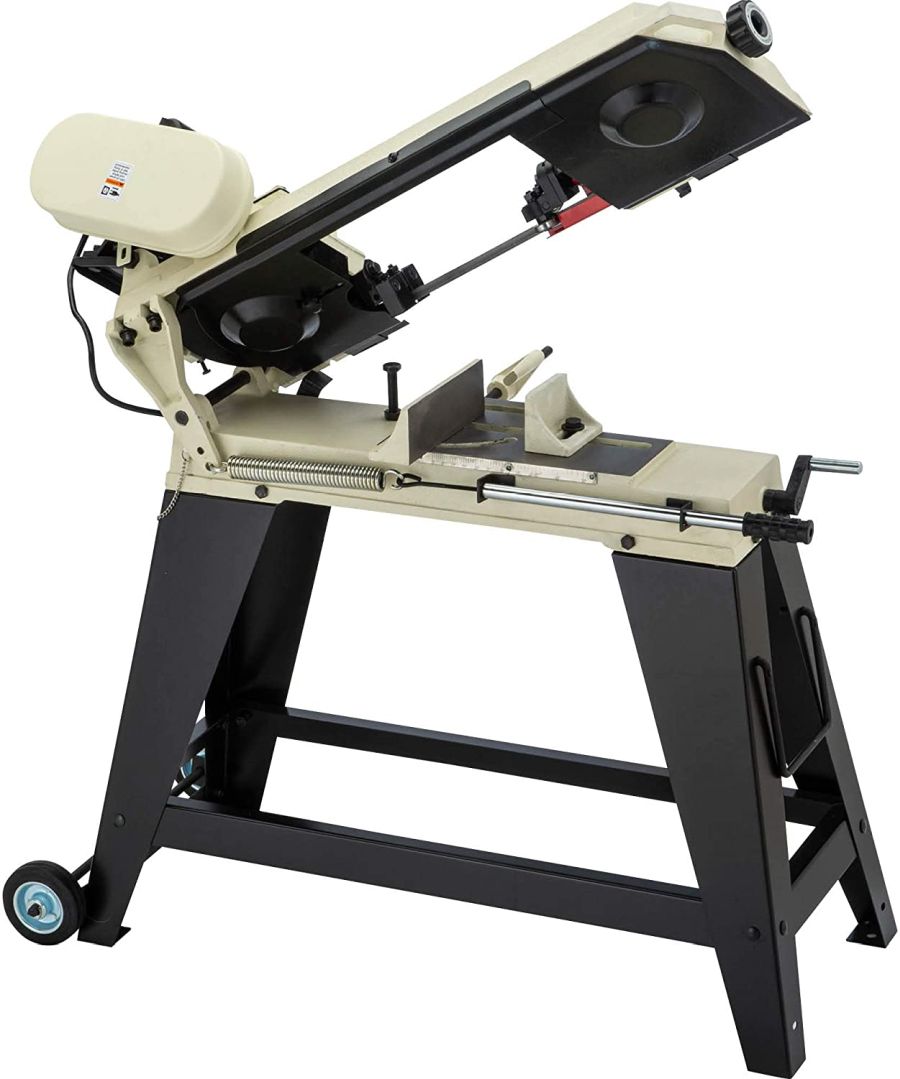 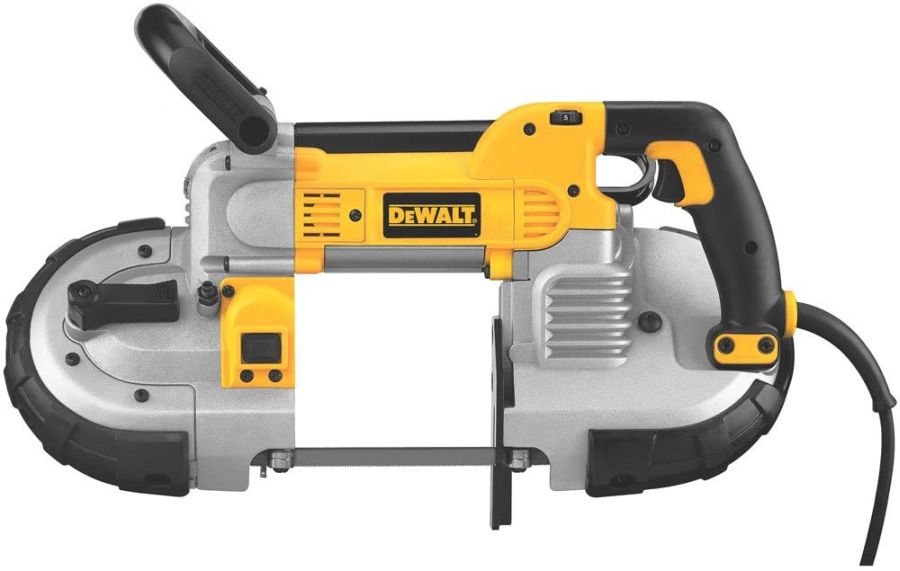 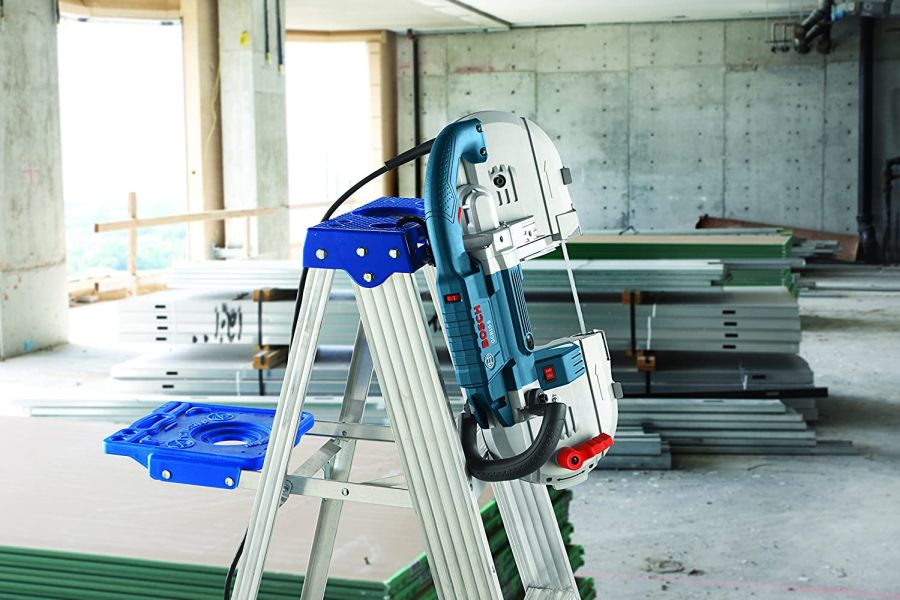 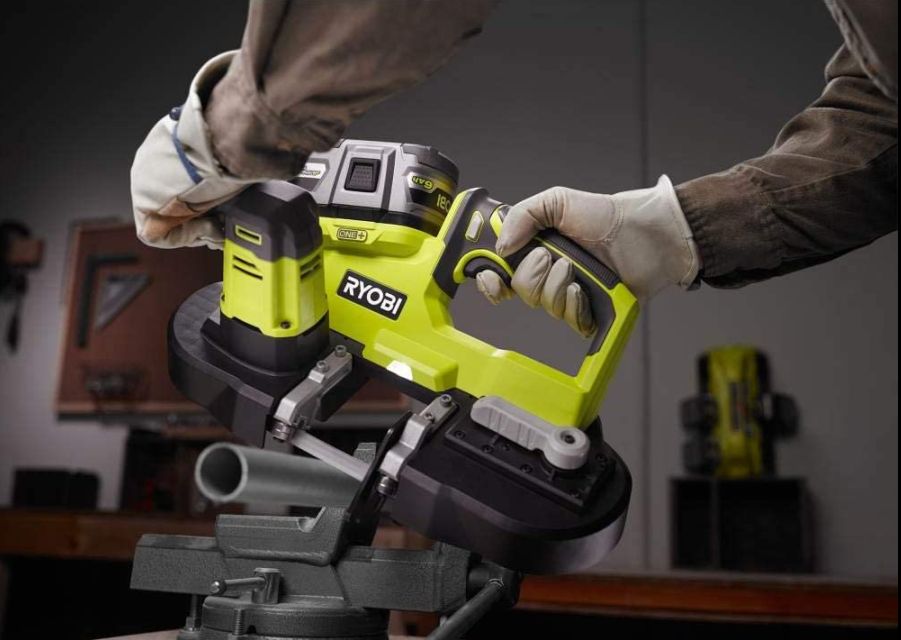 If you’re looking for a tool that will make clean smooth cuts, look no further than a band saw. As they have high speeds and thin blades, they’ll be able to cut into various materials with no problems at all. When it comes to band saws however, there’s both a corded and cordless version. Cordless band saws are great for individuals who are looking for something that’s compact, convenient and not quite as expensive as corded band saws.

Thinking of purchasing a cordless band saw? We’re here to help. Below, we’ve rounded up some of the best cordless band saws that we’ve found to get you started. Before that however, we’ll talk a little more about how you should go about choosing your cordless band saw and answer some frequently asked questions.

This portable band saw has the capacity to cut through wood, metal or plastic quickly and efficiently.

This band saw comes with a robust 10 amp motor that will provide clean cuts so you won’t have to worry about reworking your product after.

This Dewalt portable band saw comes with a speed dial that allows you to toggle between speeds for specific materials and various applications.

This band saw can be set up for both vertical cutting along with horizontal cutting operations – depending on your needs.

This band saw can be used in both horizontal and vertical positions and is a great band saw to purchase if you’re looking for something that can tackle the toughest jobs.

This band saw is incredibly reliable and comes with excellent performance. If you’re looking for something that’s both powerful and will last for a considerable period of time, this is a great purchase.

How to Choose A Band Saw

When it comes to choosing a portable band saw, there are a couple of factors to take into consideration.

Even if you’re buying a cordless band saw, you’d want something that comes with a good amount of power as it’ll help you cut through materials easier and faster. If you end up purchasing an underpowered cordless band saw, you run the risk of not being able to maintain precision, speed and torque while cutting.

Another factor to consider is the motor of your cordless band saw. This is typically rated by horsepower. If you’re using your portable band saw for small DIY projects, a band saw of less than 1.0 horsepower is more than sufficient. If you need to cut metal or large hardwoods, you’re probably better off looking for a cordless band saw that has about 1.5 to 2.0 horsepower.

Below are some of the pros and cons of a cordless band saw.

There are a few different types of cordless band saws and we’ll discuss them in greater detail below:

With metal band saws there are usually horizontal and vertical band saws. Horizontal band saws are usually used to cut something down to size whereas vertical ones can be used for various jobs from filing to polishing. While extra maintenance is required, they usually have additional features built-in. Metal band saws can also typically cut through various materials – making them a popular tool in workshops.

Wood band saws are versatile and the large ones – though typically not cordless, can be used for ripping lumber.

As the name suggests, this band saw is used for carving and cutting through various types of meat. Usually made with stainless steel, they’re typically easy to clean and maintain. Some may even come with additional features such as being able to slice through thick bones or having a sausage making spout.

This band saw is appreciated by both amateurs and professionals alike. They’re useful for cutting longer materials down to size.

These are incredibly versatile and can be used to create different shapes and lines. They can also perform precision cut straight lights and are a fantastic all-rounder power tool. They’re typically able to cut through materials fast and have excellent cutting capacity.

These are the most common cordless band saws and can be used for straight edge cuts, curved lines, irregular shapes and more. They’re not only convenient but can also be used for cutting stock that may be too big for a regular band saw.

If you’re not sure whether you should be purchasing a corded or a cordless band saws, here are a couple of features that set them apart:

If you want something portable, you should definitely be purchasing a cordless band saw. Not only can you carry it around easily, but you can also use it in places where there isn’t a power source.

If you’re looking for a band saw with power, a corded option might be the better choice. Corded band saws are typically more powerful and allow you to work without stopping. For smaller-scale jobs however, a cordless band saw will do just fine.

This particular band saw comes with a two-and-a-half-inch cutting capacity and can be used for a wide range of applications from cutting wood to metal or plastic. As it comes with an integrated pommel handle, you’ll also be able to hold your portable band saw comfortably with no issues at all. As it comes with a 560 SFPM you’ll be able to cut through materials swiftly. It comes with an adjustable blade tracking and comes with a hang hook as an overhead storage option. It’s lightweight, portable and customers mentioned that it’s a versatile product that’s perfect to use when they’re away from their workshop.

This fantastic band saw comes with a robust 10-amp motor that will help provide clean cuts. With that, you won’t have to worry about any rework required on the product after the cuts are made. It also has a nearly spark-free operation for added safety. Other great features of this band saw include deep-cut capability, being compact and lightweight, and the ability to cut tough overhead materials. As it comes with variable speed settings, you’ll also be able to select the cutting speed that best suits your needs. Customers that have used it mentioned that it zips through relatively heavy steel and is a nice and portable band saw that does the job well.

If you’re looking for a metal cutting band saw that’s economical, portable and easy to use, this band saw will do the trick. It comes with three speeds and can be used for both small and large projects. It also has three cutting speeds that you can easily change along with a built-in mobile base that allows you to move your band saw to its desired location. Best of all, this band saw can be set up for both vertical cutting along with horizontal cutting operations. Customers who purchased this band mention that it works well for some light manufacturing and like how it’s crafted from solid quality material.

This band saw has the ability to tackle both horizontal and vertical cutting. It comes with an infeed table assembly along with four 8” rubber wheels for ease of movement. It also has multi-position blade guides along with a built-in storage cabinet and chip tray. Customers who have purchased this cordless band saw really like it and one customer even managed to cut about 500 steel bars with it. They also mentioned that the hydraulic feed control works great and it comes with everything you need for production and small projects.

Last but not least we’ve got this portable band saw. It’s reliable, comes with fantastic performance and even comes with job site armor technology and a metal direct drive system that provides game-changing durability. It’s crafted with a proprietary composite material and even has crush zone barriers for better protection. While it might be durable, this band saw doesn’t skimp on power. It delivers superior cut accuracy and great cut visibility. In addition, the balanced design of this band saw allows it to fit comfortably in your hands while you’re using it. Customers have given it rave reviews, and they really like how the band saw cuts incredibly fast and smooth.

What are cordless band saws used for?

Cordless band saws can be used for numerous functions. They’re most commonly used in metal fabrication shops for functions such as cutting and shaping steels. Portable band saws can also be used for billet shaping – cutting billets to their basic shapes. They can also be used to create a tenon joint, specifically crafting the tenon tongue. If you’d like, you can also use a cordless band saw to cut large woods into smaller sizes or even to the smallest size. Below is a snapshot of some other functions that can be used with a cordless band saw:

What is the best portable band saw?

It really depends on what you’re looking for and whether or not you’re a devoted professional or just an occasional user. When it comes to choosing a portable band saw, you’ll just have to make sure that it’s accurate, easy to use and compact. If you’re purchasing a portable band saw it’s likely that you’d want to be able to easily carry it around so you need to make sure that it’s something you can carry around with you at all times.

Yes, they do, they’ve got a cordless compact band saw that comes with numerous features.

How much is a portable band saw?

It depends on the model, but portable band saws are typically priced around the $200 mark.

We hope that you were able to find a great cordless band saw from the options above. If you decide to purchase a portable band saw, make sure that it comes with features that suits your needs – whether that be weight, compactness, versatility or power. Take your time to look through the various cordless band saws available and read through customer reviews before making your purchase.