One of the best power tools that you often see on construction sites is the jackhammer. It’s also a pretty intimating tool, one that’s large and difficult to manipulate. It is true that jackhammers require know-how, and not everyone knows how to use them straight out of the box. 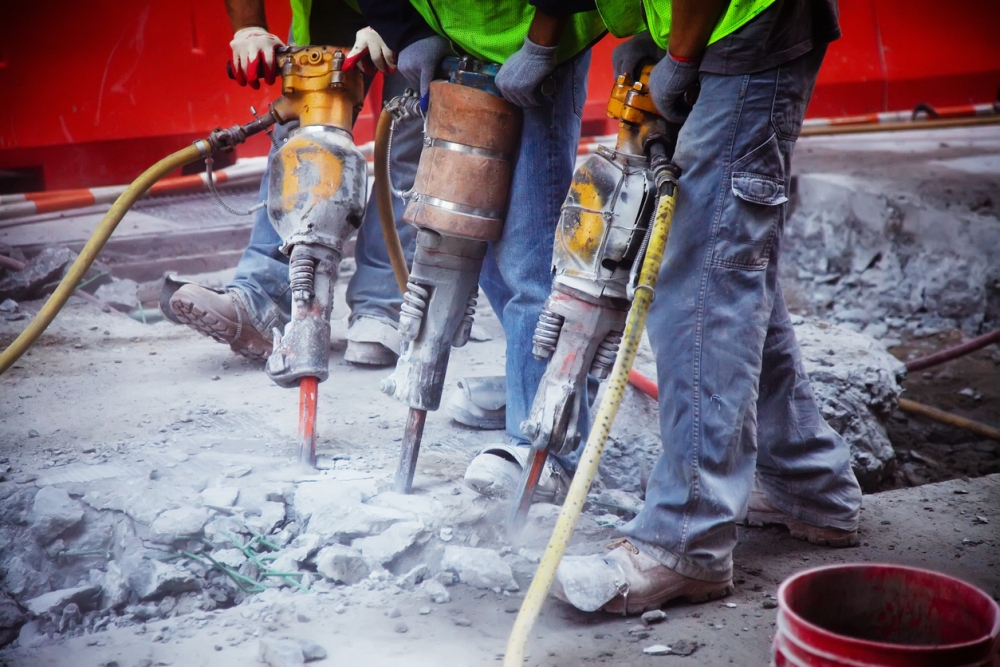 Since they can be expensive and dangerous to use, we put together a tutorial on different types of jackhammers, what to look for before you buy them, and then devised a list with the best models currently available on the market.

Electric VS Gas VS Air

Technically speaking, there are four different types of jackhammers: electric, pneumatic, hydraulic, and gasoline-powered units. Hydraulic jackhammers are something that we won’t be discussing today, as they are mostly designed to be used on mechanical excavators, since they are larger and more powerful than the other three categories. Let us examine the other three.

Electric jackhammers have a motor that’s powered by electricity, used to rotate a crank. It operates using two pistons: a free-flight and a drive one. Compared to gas-powered models, electric jackhammers are lighter in weight, but can be just as powerful and render the same level of productivity. However, they aren’t very portable because you will always need to have a power source nearby, usually in the form of a power outlet.

These jackhammers don’t require a compressor to function and technology has advanced up to a point where brushless motors have made them very powerful. They are useful in environments where you don’t have access to a compressor, such as crowded building sites or even inside a building.

Gas-powered jackhammers have a fuel engine where they draw their power from, which makes them more portable since you don’t need to have a power outlet nearby to get them to work. However, they are not as eco-friendly as the other options and will constantly require having fuel nearby. Another two major drawbacks of using gas-powered jackhammers is the high level noise output and the massive vibration they produce, which could end up being uncomfortable for the user at some point. There are professional and household models as far as gasoline jackhammers are concerned.

Air jackhammers are more formally known as pneumatic jackhammers because they use air as their primary power source. They have diesel engines that power a portable air compressor, usually a rotary one (this is mostly true for modern versions). The pneumatic tool is usually lightweight, making it suitable for long-term work. A pneumatic jackhammer can easily be used in humid and dusty environments.

When you’ve decided to invest in a jackhammer, here are some of the things you should look out for prior to spending any money.

One of the biggest drawbacks of using a jackhammer is the fact that this is one of the power tools with highest noise output ever. However, you should know that some types of jackhammers are quieter than others. For example, air models tend to make less noise compared to electric ones due to their internal operating mechanisms. The noise level output isn’t just important for protecting your hearing, but also because job sites need to be noise-compliant.

High vibration is yet another common problem with jackhammer, one that would lead to carpal tunnel syndrome or Raynaud’s disease. Electric and pneumatic jackhammers are known for having a high vibration output, so look for features such as internal shock absorbers and vibration dampening handles to tone down some of it.

You should look for this feature if you intend to buy an electric jackhammer because it allows you to operate the tool even if it’s wet outside.

Jackhammers use hoses and these parts should be chosen based on the type of work you want to do, how much pressure your jackhammer needs, and the distance between the air compressor and the tool (in case you want a pneumatic jackhammer).

The best jackhammer designs are those that grant access to the power controls without making you take your hands off the handles when doing so. It’s really important for the controls on a jackhammer to be intelligently placed so that you can access them with ease and use them even if you’re wearing thick gloves.

This is a jackhammer feature that forces the tool to a gentle start so that you can control it with higher accuracy. This goes hand-in-hand with the tool’s variable speed control, allowing you to work slower in delicate areas (such as next to pipes).

It’s important for the jackhammer to have alert lights that notify you when the machine needs your attention. This could be in situations where the electric motor brushes need to be replaced or when the cord that damages the motor is experiencing any problems.

Even if you have the possibility to connect an extension cord to a power outlet, it is still a good idea to find a jackhammer that comes with a long cord by default.

How to Use a Jackhammer

First and foremost, you’re going to want to invest in safety equipment before using a jackhammer. This is important regardless of the power tool you want to use. A jackhammer, while very useful for construction and demolition jobs, can also be a very dangerous tool, so you need to learn how to work with it before you actually start working with it.

Hearing protection is essential because these tools have a very high noise output. You also want to invest in items just as goggles, steel-toes shoes, work gloves, a hat, and a respirator. Also, try to opt for models that offer safety protection by turning off the tool when you’re not applying pressure against a surface.

When you learn how to use a jackhammer and you’re ready to start working with it, it will make any construction and demolition job a lot easier. For example, here is a tutorial teaching you how to remove concrete slabs on a patio without using a jackhammer. The tutorial starts off based on the idea that not everyone is willing to rent or invest in a jackhammer, and that these tools weigh a considerable number of pounds and are difficult to manipulate. Both of these ideas are true, but if you learn how to operate a jackhammer, projects like these could be faster and more efficient.

Best Electric Jackhammer If You Are A Serious DIYer

The Bosch 11335K is a quality product and you can pretty much tell because Bosch is a brand that has often set a benchmark for what power tools are supposed to be like. This is a tool that’s easy to handle, but one that doesn’t fail to deliver. It comes with active vibration control handling, cutting back on vibrations with up to 40 percent. That makes it more comfortable to operate compared to plenty of other electric jackhammers on the market.

Durability is not a question with this product, being constructed from solid materials, such as a sturdy metal frame that’s impressive, to say the least. Along with this jackhammer, you will also receive a set of quality chisels that work on various surfaces. The case allows you to keep the jackhammer safe during storage and transportation. The Bosch 11335K has one of the best power-to-weight ratios we’ve seen, so it’s definitely worth the buy.

The XtremepowerUS is the jackhammer that makes you feel like a true construction worker. Everything about it just screams “power”, from the high-power motor that can break though almost every surface, to the 55ft/lbs impact. The 360-degree adjustable foregrip is a feature to appreciate, as it allows you to operate the machine faster. As you get adjusted to this machine, you will discover that you have better accuracy during your jobs.

The anti-vibration feature has a recoil that doesn’t interfere with your work that much, which is pretty impressive considering the power of this machine. It does tend to heat up a little bit, but it’s pretty understandable considering how much power this packs. Overall, it truly is one of the best electric jackhammers on the market.

One of the brands with the most respectable reputation in terms of power tool manufacturing is clearly DEWALT. The D25901K jackhammer is a great product to consider, especially if you are a DEWALT fan. It comes with a 14-amp motor that prevents overload and delivers high performance each time it’s being used.

It comes with active vibration control to prevent you from feeling too much torque at your fingertips. The variable impact control dial allows you to select between nine different settings that offer the right impact energy based on what you’re looking to demolish. The power rocker switch can easily be pressed with just one finger.

Another reliable jackhammer for those looking for an electric model is the Mophorn 3600W, a powerhouse that operates at 1,800 rotations per minute. It comes with a dual-handle with 360-degree swivel feature for easier manipulation. It has a solid insulation protection shell that delivers strong metal components built to last.

Along with the jackhammer, you will also receive a 16-inch flat chisel and a 16-inch bull point chisel, both of which can be quickly installed without any hassle. Other features of interest include a lock and trigger button, and a blow and vent system.

The TOTOOL jackhammer is constructed from materials that are clearly built to last. With 3600W-worth of power, this unit allows for extensive use thanks to the 360-degree adjustable grip. It has a drilling diameter of 3.74 inches and works really well for different applications, from digging to crushing concrete slabs.

We love the fact that the TOTOOL jackhammers comes with a variety of accessories and protective gear that will serve you well: one 16-inch bull point chisel, one 16-inch flat chisel, protective gloves, goggles, a mask, two hex wrenches, two carbon brushes, and an oil bottle. Overall, this is a jackhammer that’s easy to operate and that reduces fatigue thanks to vibration absorption.

Are electric jack hammers any good?

As with every other category, electric jackhammers have their own series of advantages and drawbacks to consider. They are not good for those interested in portability because you will always be restricted by the proximity to a power outlet. However, they are lighter in weight compared to gas-powered models and can be highly performing nevertheless.

What does a jackhammer cost?

The cost of a jackhammer will depend on its size, features, construction, and what type of work it’s capable of handling. Entry-level jackhammers can be as cheap as $120, while heavy-duty models that are used on construction sites can cost up to $1,600.

What size demolition hammer do I need?

Is a demolition hammer the same as a jackhammer?

Yes. In fact, the demolition hammer is the British version of a jackhammer, but they both do the same thing.

While jackhammers are useful power tools, they are not something to be taken lightly, as trying to operate one without having any idea of what you’re doing can be really dangerous, even if you know your way around different other power tools. Keep in mind that there are different jackhammer sizes that are suitable for all kinds of applications, and that your safety should be prioritized by purchasing the right protective equipment when using such tools.