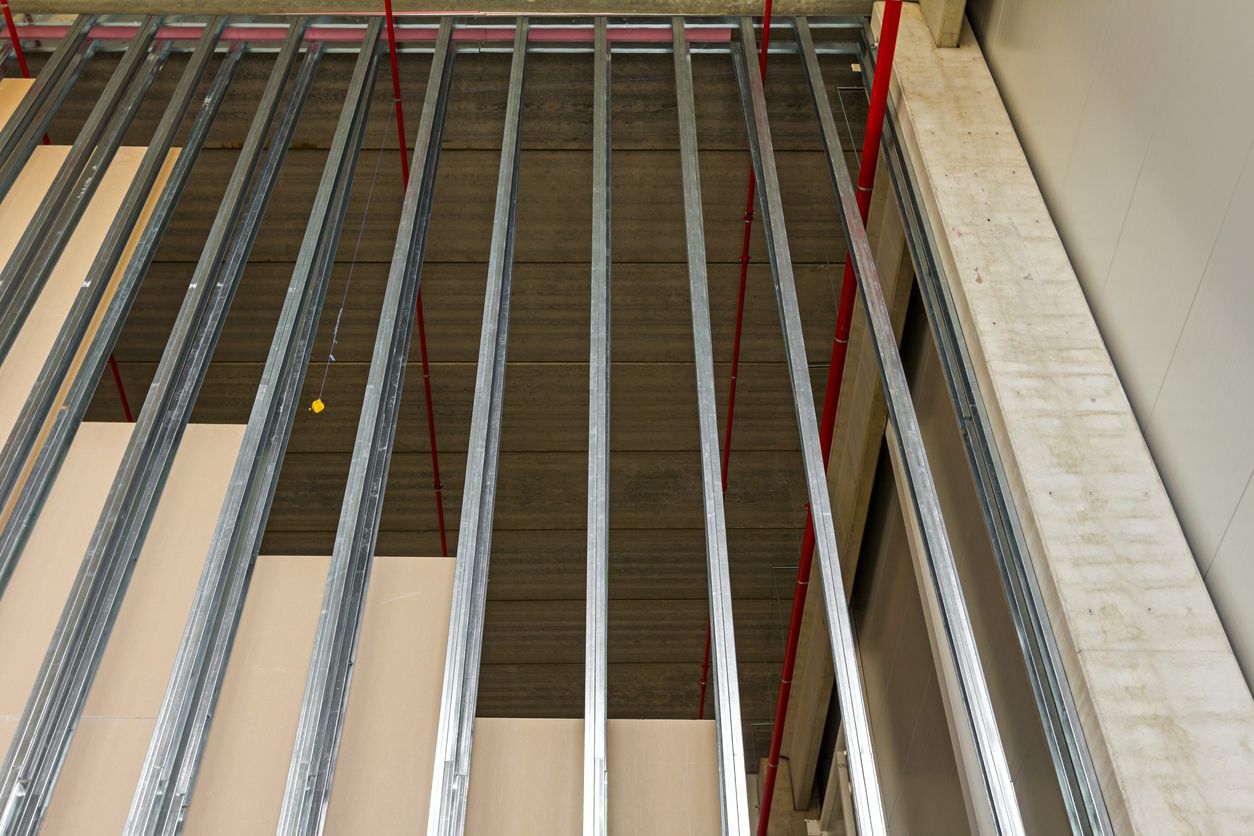 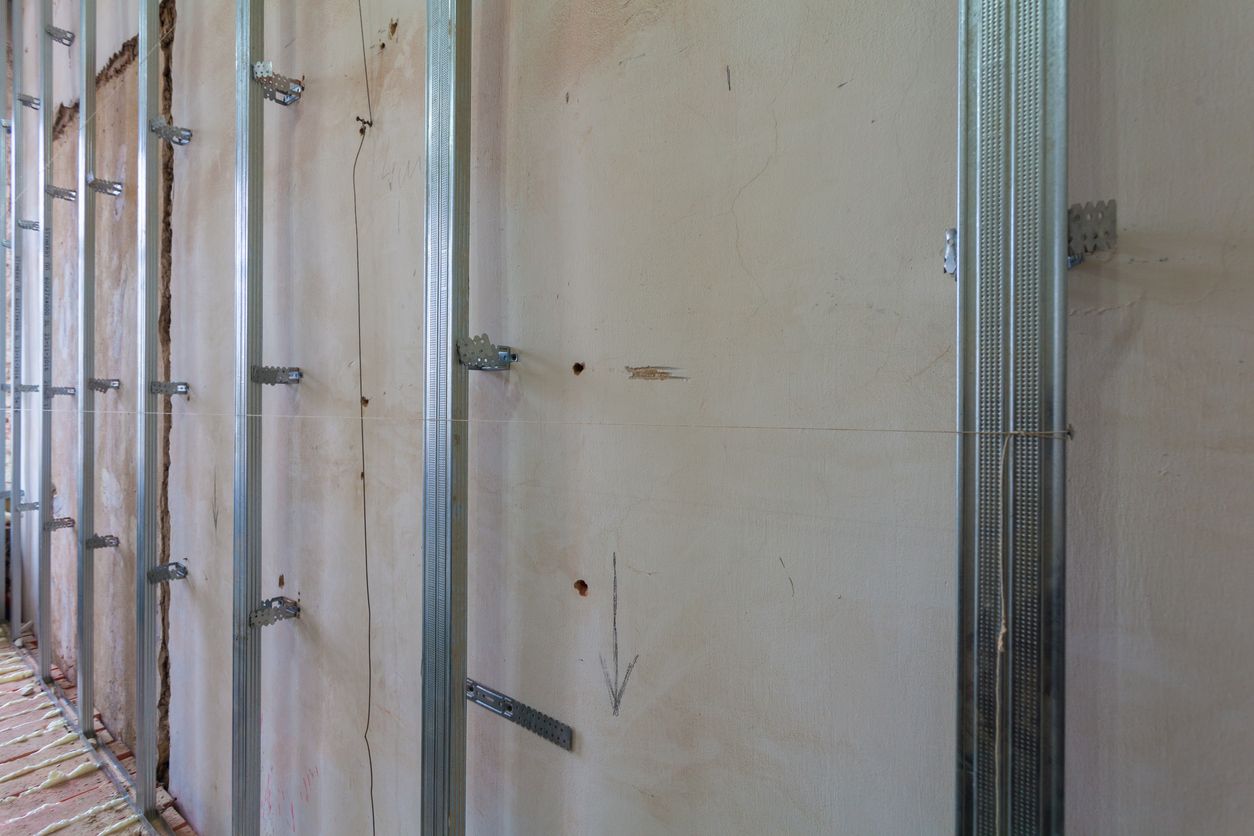 Metal studs are suitable for any type of buildings, from houses to commercial buildings due to their strength and durability. Metal stud framing is a construction method that uses tracks, metal studs, and other elements. The framing method is best for partitions, ceilings, and structuring interior walls.

It’s a cost-effective and easier-to-install frame. The metal stud construction is also lighter in weight than steel frames or wood. There are specifications to follow when installing a metal stud framing. You can DIY install the metal stud framing with the right tools and techniques.

What Are Metal Studs?

A metal stud is a structural component that builders use to construct interior walls and ceilings. Most metal stud frames are either made of aluminum or galvanized steel. They’re sturdy, lightweight, durable, and common in commercial or industrial construction.

The Perks of Using Metal Studs

Metal studs have some benefits, making them more suitable than wood or galvanized steel framing.

Metal studs are also suitable for earthquake-prone areas and environments with high moisture levels or wind. They require less maintenance over time.

Metal studs are available in various widths and heights. It’s worth knowing the right size for your walls before purchasing.

The standard widths for metal studs are 2 ½ and 3 ⅝, but custom dimensions are available upon request. A metal stud’s height depends on the area of installation. Metal studs are also available in different thicknesses.

The spacing of the metal studs affects the strength and weight it can hold. Most builders erect metal studs 16” apart from one center to the next. Other design plans allow placing the metal studs 24” inches on center.

A structural engineer should determine the spacing to ensure proper distribution of weight. The flange and lip size are also worth considering when installing the metal studs.

Here’s a list of tools you may require for metal stud framing:

The standard metal stud sizes are:

These sizes refer to the width of the stud. The thickness of the metal can vary, with the most common being 25 gauge and 20 gauge.

Nominal sizes are used to identify metal studs. But they’re not the actual dimensions of the studs.

The side sections (flanges) of metal studs vary in width.

How to Read Metal Stud Sizes

Most manufacturers label their metal studs in a series of digits. For instance, 300 S 162 43. The first three digits represent the web size in 100th inches. S represents stud, so it’s a 3-inch flange metal stud.

How to Determine the Right Metal Stud Size for Your Project

Metal framing studs provide vertical support to a wall. They range from 2-14 inches wide. 3 ⅝-inch wide studs are the most common for commercial doors and window bucks.

When installing metal studs on doors, leave a 3-inch gap. The gap helps fasten 2✕4 wood bucks for hanging the door. Lower gauge metal studs are made from thicker steel. A 25-gauge steel, for instance, is thicker than a 20-gauge stud.

Local communities have building codes to ensure strong structural integrity. The codes protect the occupants of the building from natural disasters and extra damage costs.

Communities update the codes often, so it’s crucial to keep up to date. Through InspectToProtect, you can learn the building codes in your area before installing metal studs.

Metal stud framing costs an average of $9 to $13 per square foot. Lower gauge metal studs cost more than higher gauge types because they’re thicker. Labor costs, the size of the building, and the type of metal stud also influence the final costs.

Standard metal stud sizes are 1 ⅝, 2 ½, 3 ⅝, 4, and 6 inches. They also vary in thickness, from 14 to 26 gauge. Consider the size of the building before choosing the ideal size. Building a large structure requires thick metal studs with a wide web size. For small structures and non-bearing walls, thinner studs would suffice.

A stud-framed wall is used to partition offices and apartments. A double-stud partition is essential when creating a thick wall with insulation. Metal studs create a house’s main frame according to the architectural plan.

Studs also come in handy when you need more partitioning in the future. Builders use studs on multiple-story buildings. Studs also customize garages and half-walls.

The three main components of a metal stud wall frame include:

Manufacturers include color markings on metal studs to help in identifying the stud size. For the metal studs’ actual dimensions, you can use a micrometer.

Use aviation snips to cut metal studs to the desired length. Cut both sides with snips and score a line on one side. Then bend the stud back and forth till it breaks apart.

Use a Level to Maintain the Right Alignment

Use leveling tools to ensure precise measurements of the metal studs. The studs should have gaps less than ⅙ inches from the top and sole plates. If the gaps are bigger, the weight of the walls is transferred to the screws. It results in a weak frame that might not hold up over time.

Align the Precut Holes for Wiring and Plumbing

Electrical cables should run along each stud’s center line. Screwing the cables using plastic ties bundles them together and secures them to the studs. Before running the cables through, insert plastic cable bushing into the holes. It protects the wires and pipes from rubbing against the studs’ sharp edges.

Leave Some Space Between Studs to Enhance Stability

Space load-bearing metal studs at 24 inches centers to maintain the structure’s stability. The studs could be spaced 16 inches from center to center for interior walls. Spacing allows for the installation of drywall and baseboards along the frame. Install the studs in the same direction for easy wiring.

Metal Studs vs. Wood Studs: Which Is Better?

Metal studs are lightweight and easy to transport than wood studs. Unlike metal studs, wood is prone to bending, warping, and rotting in high-moisture rooms. Metal studs are more suitable for load-bearing walls and frames. They tend to support more material weight.

Metal stud sizes and widths are standardized and come with knockouts for wiring and plumbing. But, metal studs can be challenging to install since only drywall screws penetrate through.

Their impermeability makes it difficult to hang decorative wall hangings after framing. The contractor installs wood blocking in the metal framing for any wall hangings. The wood blocking allows nails and screws through when fixing kitchen cabinets and other objects.