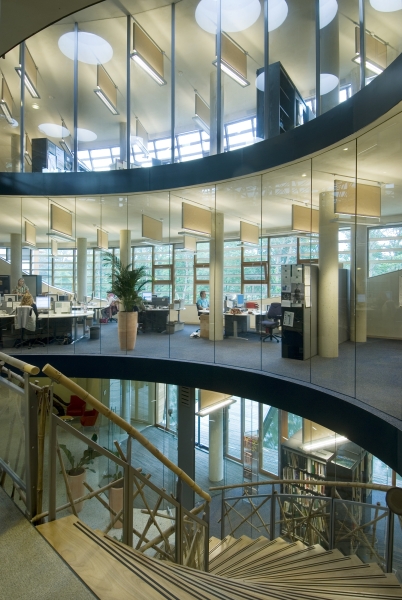 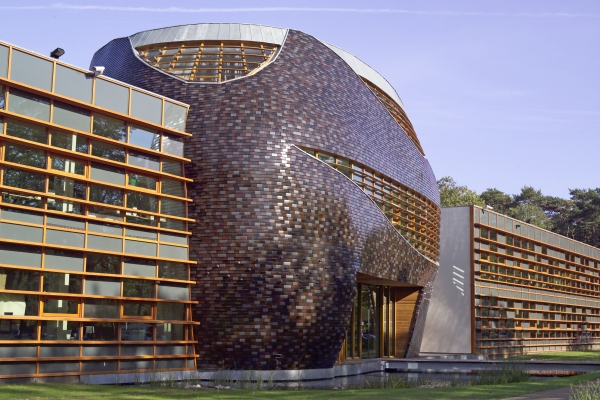 Nowadays people have the tendency to create more modern buildings and eco- friendly as much as possible. If they combine all these ideas with that of recycling their job will become complete.

It is also the case of this fantastic modern building that RAU Architects transformed it into an office building for World Wildlife Fund. Actually this building was an old agricultural laboratory in the Schoonoord nature preserve near Utrecht. It was built in 1954 and now it became the Dutch WWF headquarters. The old building did not suffer a demolition but major renovations were brought so that it could become a self- sustaining building in terms of energy and which does not emit CO2.

There is a single large area which houses the entranceway, the reception area, exhibition spaces and a call centre. All these spaces are connected by a large steel and wood spiral staircase that takes you upstairs.

A bridge over a small pool of water seems to assure the access to the entrance of the building a thing which makes you think of those impressive fortresses where you could enter almost the same way.

The exterior walls of the building are made of brick while the interior walls are made of mud laced with bamboo stalks. The offices are located in the east and west side of the old building whose form remained untouched but its façade was completely renovated with transparent and opaque glass. The press and the conference centre are situated in the northern building block which rests on supports coated with chips of wood.

It is a building with an architectural structure that would impress any viewer and would satisfy any eco person too.