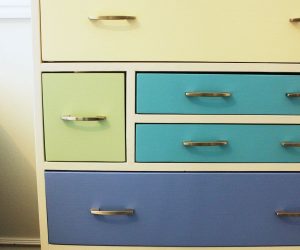 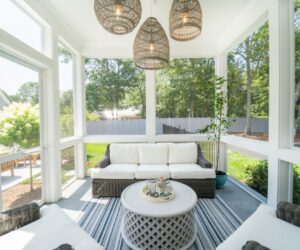 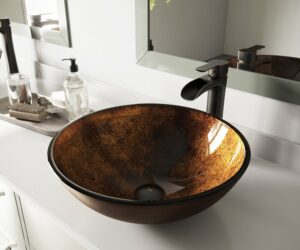 Offices in general are not exactly the most pleasant environment you would like to be in. Over the years, a pattern has been created for offices and work spaces in general and this pattern shows them as very simple spaces without much color and without an inviting atmosphere. Still, some companies and architects try to change that image and so amazing offices are created. Here are just a few beautiful examples.

We’re going to start with an office that can be found in the Vita Berg Park in Stockholm, 30 meters under the granite rocks. It was designed by Albert France-Lanord Architects and it was completed in 2008. The office covers a total construction area of 1,200 square meters. The client, an internet provider, wanted the architects to think of the rocks and surrounding environment as a living organism where humans are guests bringing their best gifts: light, plants, water and, of course, technology.

The idea is interesting and creates a very nice story that explains why the décor is so full of contrasts. It’s refreshing to see nature and technology put together in such a harmonious way. Even though they are two very different things, they look like they’ve friends since the beginning of time. This office is definitely unique and a great example of innovative design. 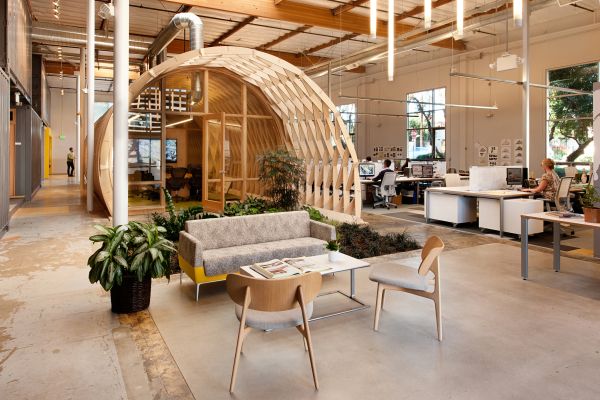 The nest impressive office we’re going to take a look at is located in Culver City, California, USA. It was a project developed by Cuningham Group and it was just completed this year. With an area of 8500 square feet, the office is impressive but not just on that level. The design chosen was meant to emphasize the interest in sustainability that the client has made a priority for the project.

This office was envisioned as a space where collaboration and creativity can evolve and where both nature and humans have something to gain. The office is targeted for LEED Gold certification and it’s a sustainable structure. Originally it was a warehouse. After it was converted and redesigned, it became a space full of light and fresh air. The office even has an indoor garden as well as a vegetable garden which can be found in the so called backyard. 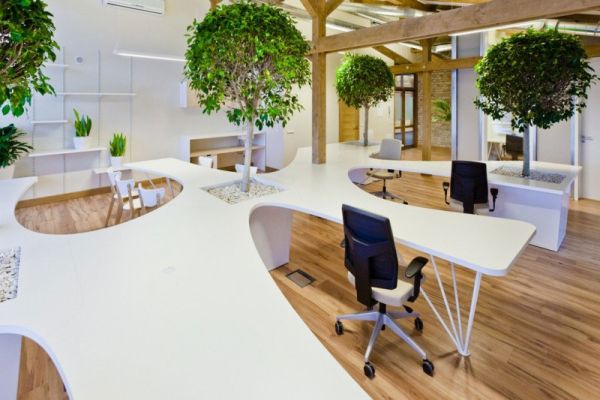 Since we were just discussing sustainable designs, here’s another office that has a very refreshing look. It’s an office that was created in 2012 for a company from Riga, Latvia. It was a project by OpenAD and has a very simple and fresh design. The office basically features a huge open plan with a minimalist and white décor. But the whiteness is complemented by all the beautiful trees spread throughout the space.

For this project, the client only had one request: lots of plants and vegetation. To also make the space feel inviting and functional, the architects came up with a simple and clever design. They created an open space office with multifunctional furniture, a sitting area, a dining area and lots of big trees. The office also has a kitchen, also decorated with lots of plants. The wooden floors create a very nice contrast and bring warmth into the office.

When designing an office, probably the most difficult part is creating that connection with nature that brings balance into the décor. It’s difficult to integrate nature into an office when there are so many other concerns, most of which have to do with productivity, comfort and efficiency. But we found an office where this connection is definitely not missing.

This office was a project by Spanish practice Selgas Cano who designed their own architecture office. The location in this case is crucial. Situated in the middle of nature, the office is surrounded by vegetation, trees and beauty. To emphasize this connection and the beauty of the landscape, the office was designed with a huge glass wall that offers panoramic views and lets in plenty of natural light. It must be very refreshing and nice to have to explore the forest when you go to work. This way routine becomes adventure. 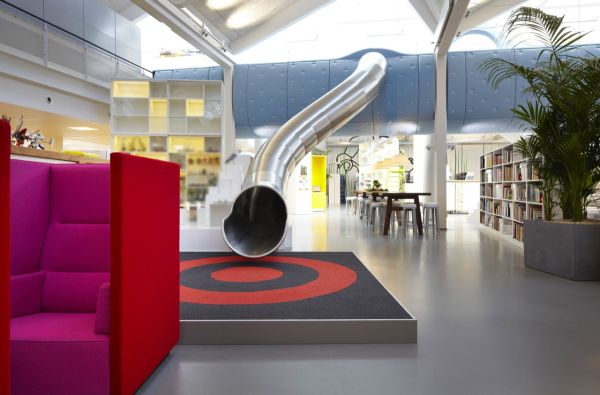 Next on our list is this interesting office. Located in Billund, Denmark, the office was a project by Rosan Bosch & Rune Fjord architects. It was completed in 2000 and has a total area of 2000 square meters. In case you didn’t guess yet, this is a LEGO office. What’s nice about this space is that functionality meets fun. It seems natural for a LEGO office to have a playful design.

The innovative design of the LEGO PMD office focuses on fun, innovation and creativity. Here we can find a work environment where team work and interaction are encouraged, where there’s a very nice balance between efficiency and recreation. The office is decorated with huge grass wall graphics, a giant LEGO man, tables with bonsai gardens and a giant slide. The first floor houses three meeting rooms, each with their own color. Who wouldn’t want to work there? 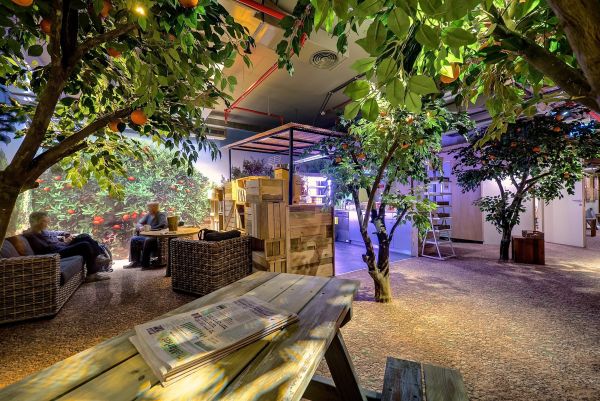 The next office we’re going to analyze is actually one of Google’s offices which, as you know, are always impressive. This is Google Tel Aviv. It was opened in December 2012 and it can be found in Israel. With a total surface of 8,000 square meters, this office is quite impressive. The project was developed by Swiss design team Camenzind Evolution in collaboration with Israeli Design Teams Setter Architects and Studio Yaron Tal.

The design is eye-catching and colorful. In addition, the views of the sea and the city are magnificent. Around 50% of the total space has been dedicated to communication and interaction. Here you can find both private desks and shared work stations where teams work together and interact. This office and any other Google office in general show us that it’s very important to have a diverse environment where employees can concentrate, relax and have fun. This increases their efficiency and allows them to enjoy a very pleasant work environment.{images by Itay Sikolski} 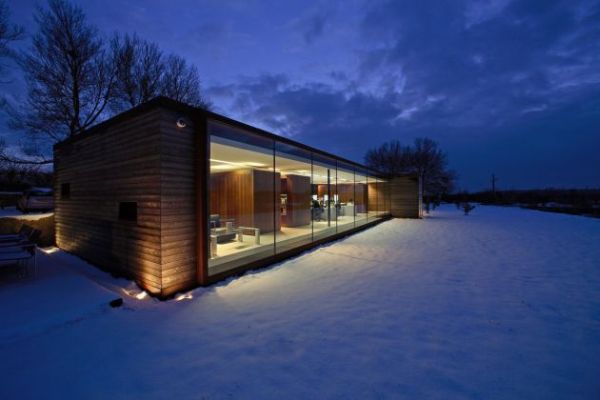 From Israel we go to the hills of Bedfordshire where we find the Long Barn Studio. It was designed by Nicolas Tye Architects and the reason why it has this name is because it was originally a barn. It was converted into an office and the transformation was completed in 10 months. Now the 2,200 square foot barn has an elegant and beautiful design. It also has a strong contemporary look and it integrates beautifully into the surroundings.

The office has a very simple design. It resembles a rectangular box and has full height larch cladding on both sides as well as 3.2 meters high glazed panels. Inside, it’s been divided into meeting rooms, a library, a printing area and a work zone. The office also has a sustainable design. It has a rainwater harvesting system, its own wind turbine and an air hear recovery circulation system. 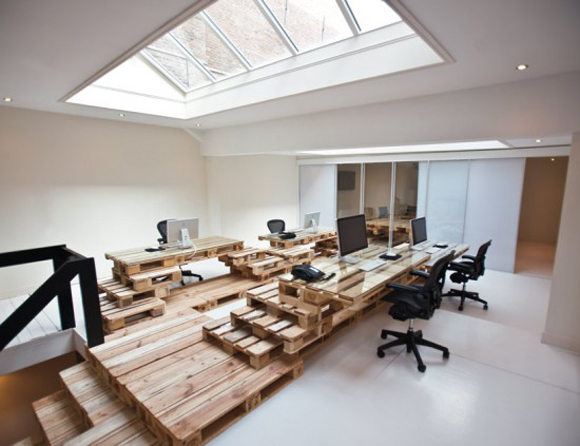 Some offices impress with their sustainable designs, other with their colorful interiors and others with their ingenious interior decors. In the case of this office, saying that the interior is interesting wouldn’t be enough. This is an office designed by MOST Architecture. It was created for an advertising agency and it can be found in Amsterdam.

As you can see, the interior of the office is almost entirely made out of shipping pallets. The pallets have been used for almost everything, from staircases to furniture. The result was a unique interior design featuring recycled materials and a very creative look. It’s just another example that shows us how versatile and how functional wooden pallets can actually be. Using them to create a unique office interior was a very good idea and the result was this one-of-a-kind and ingenious project. This is, indeed, an office with character. 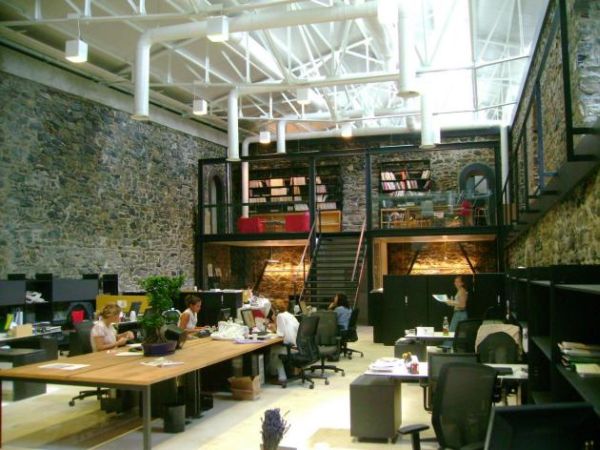 The next project we’re included here takes us to Istanbul, Turkey. Here we can find a very interesting office that was a project by Turkey based Erginoglu & Calislar Architects. The office was designed for the advertising agency Medina Turgul DDB. The interesting part is that the office wasn’t built from scratch. It was actually a conversion project.

This used to be a historical stone walled salt barn. It has been restored and transformed into what is now a beautiful office space. As you can see, most of the original elements have been preserved. The stone walls are marvelous and the arched doors and entrances give character to this space. The restoration aimed at preserving the charm and character of the building while giving it a different purpose. The office has an open design with high ceilings, exposed beams and stone walls and the overall design is somewhere between historical and modern. 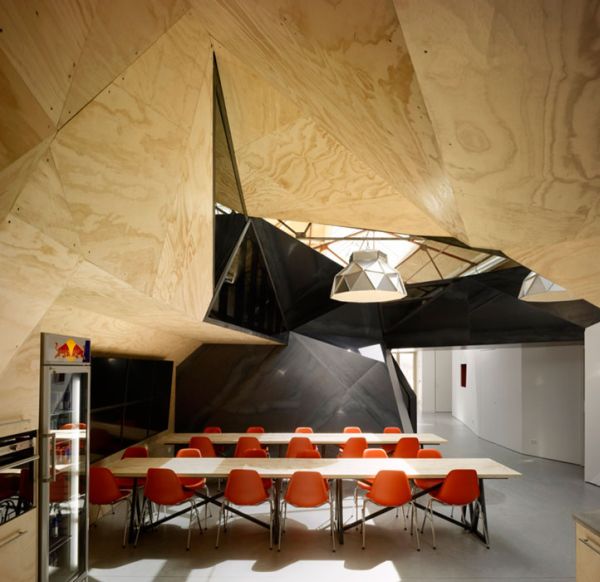 Last on our list is the Red Bull Office and new Amsterdam headquarters. It was designed by Sid Lee Architecture which was selected over two other firms. The architects were challenged to come up with a design that would capture the true spirit of the brand and that would somehow combine ordinary elements into an extraordinary décor.

The office was originally a shipping yard and the transformation it went through is spectacular. The main theme behind this project was duality. The architects tried to capture the continuous balance and dance between contrasts such as ark vs light, reason vs intuition. This duality can be seen in every detail. Here, art meets industry and the two work together to form a harmonious environment. It’s just the type of design you would expect to see in a Red Bull office. It’s modern and it’s striking on several levels.