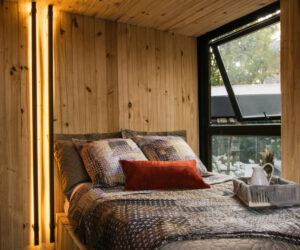 Many amazing buildings have been created over the past decades but not all of them are still standing or feature their original designs. Many have become unrecognizable as a result of drastic renovations which is what the preservation easement signed by the owners of the Noyes House II promises to prevent. The house was designed by late architect Eliot Noyes for his family in 1954 and is still privately owned by his descendants. The family signed a preservation easement held by The Connecticut Trust for Historic Preservation which obligates future owners to properly maintain the house and prevents them from making any alterations without previously obtaining permission from the Trust. Furthermore, it stipulates that any alterations made in the future must preserve the significant historic and architectural features of the house.

The house is located in New Canaan, Connecticut on a wooded site. It was built in a period when modern architecture was just starting to take shape in the US which makes it particularly valuable, hence all the measures taken to preserve its original design intent.

The house is structured into two wings, one which houses the social functions and another which contains the private spaces. The two wings frame an open-air courtyard at the center of the site. they both have walls made of stone, full-height windows and large openings which create a very strong bond between the house and its natural surroundings.