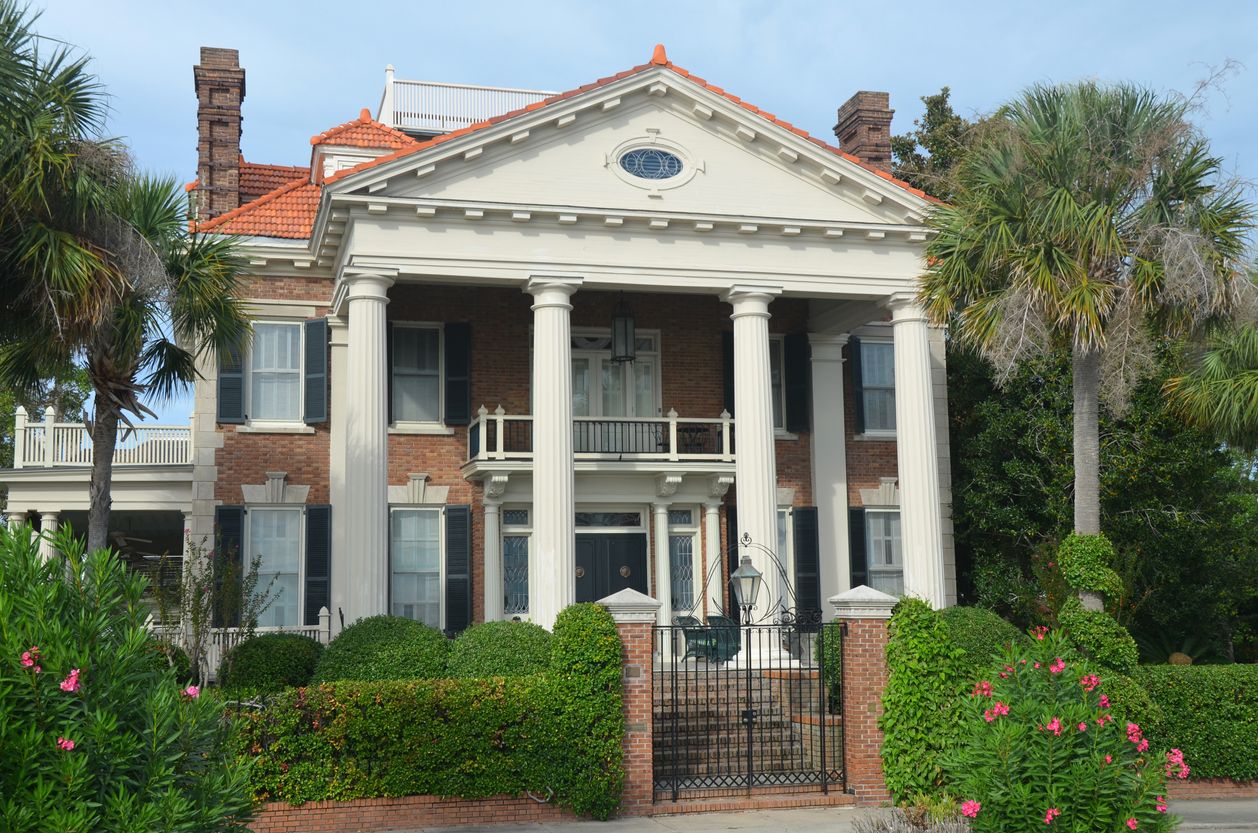 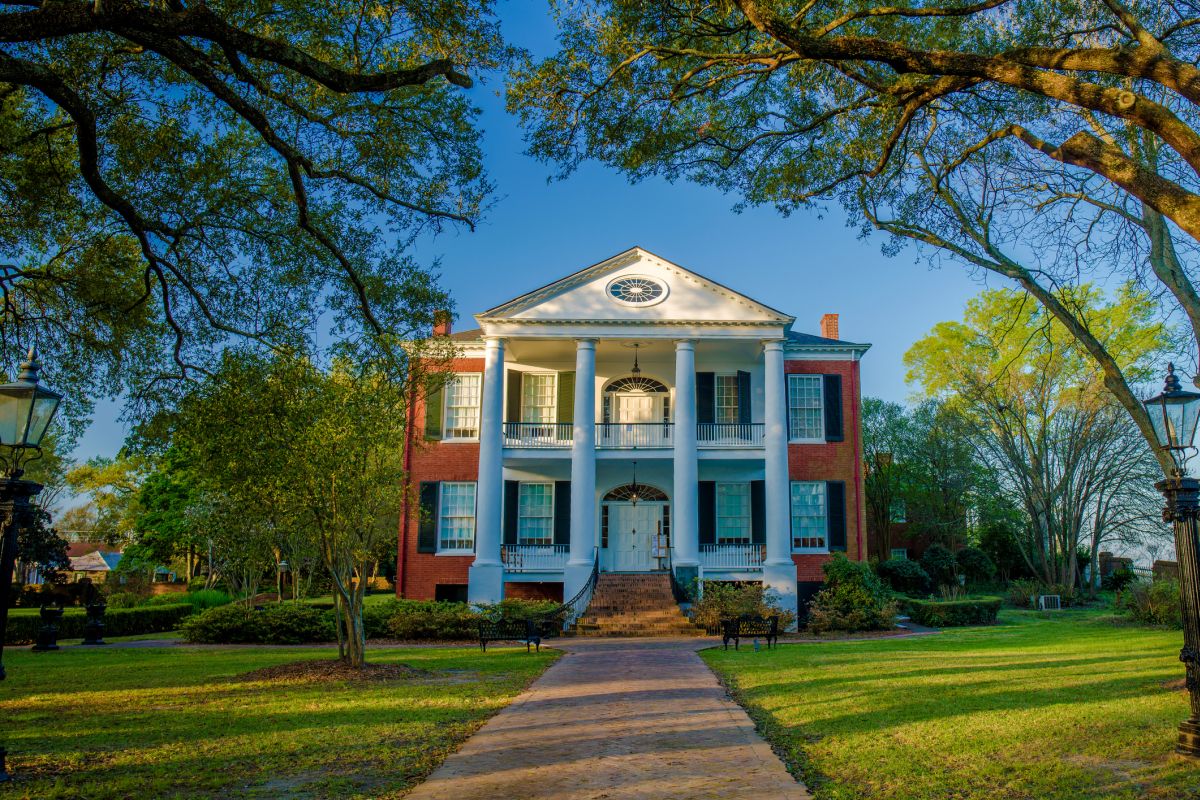 Antebellum architecture describes the grand Southern American homes built in the early 19th century until the Civil War ended in 1865.

Antebellum, meaning before the war, has the distinct connotation of large homes built in the Neoclassical style like Greek Revival. But there are also antebellum homes featuring Georgian, Italianate, and Gothic Revival styles.

Antebellum architecture has a complicated legacy because of its association with slavery in the South. The owners of many sizeable antebellum-style homes built them on plantations that enslaved people by using their labor.

Slavery isn’t directly related to all antebellum architecture. Still, the owners built these structures in a social, economic, and cultural context where citizens condoned slavery in the United States.

Slavery is an aspect we cannot forget even as we consider the antebellum home’s architectural and decorative styles.

The Growth of Antebellum Architecture

The history of antebellum architecture begins after the Revolutionary War in 1783, but experts consider 1830-1860 as the “golden age” of this style.

European immigration to the Southern States influenced interest in grander architectural styles. Many Europeans fled Europe after the Napoleonic Wars ended in 1812 to seek new economic opportunities in the United States.

Many new immigrants in the American South capitalized on the Industrial Age and made enough money to acquire higher status. The new class wanted to show off their wealth through powerful displays such as grand homes. Therefore, they based the architectural style on the traditions of Europe that represented wealth and power.

The architectural movements popular in Europe during this time were those of classical order. With the growth of the Enlightenment, people valued symmetry and simplicity in their structural designs to symbolize order, balance, and rationality.

One prime example of an antebellum house is the Old Governor’s Mansion in Milledgeville, Georgia. Charles Cluskey designed this home in 1839. Cluskey was an Irish immigrant who came to New York and trained in an architectural firm.

Cluskey designed this antebellum house with a symmetrical facade, ionic-style columns supporting a jutting pediment, and large six-over-six windows. It was the home of many chief executives of Georgia and even played a part in the Civil War. General William T. Sherman used it as a headquarters in his March to the Sea campaign in 1864.

The Decline of Antebellum Architecture

The Civil War had a significant impact on antebellum architecture, in particular plantation-style houses. Many of the owners lost their fortunes and the ability to maintain these homes.

New city planners demolished some of this Southern architecture style to make way for smaller and more practical houses. They turned other antebellum mansions into schools, hospitals, municipal buildings, and museums. Many of these museums seek to show the complicated past of the enslaved people and the interesting architectural style.

Architectural experts characterize antebellum homes by their distinctive features. Many of these features echo Neoclassical architecture.

Out of 45,000 antebellum plantation homes that existed in the South before the Civil War, less than 6,000 remain. Yet, of the remaining few, many feature distinct architectural details, making them symbolic of the era.

Barrington Hall is a Greek Revival plantation-style home in Roswell, Georgia. Willis Bell for Barrington King, who helped to found the city of Roswell.

The home features a classic Greek Revival style with a low roofline, symmetric facade, and large supporting frontal columns. The owners entrusted Sarah Winner with the house in the early 200os, and she spent two years restoring the home. It features many of the former family’s furniture and possessions. It’s now a functioning museum.

Arlington House was the private residence of Robert E. Lee. It stands in the middle of Arlington National cemetery. G.W.P. Custis, the father of Robert E. Lee, built the home between 1803-1818.

The house has a classic Greek Revival style with a jutting front gable supported by large columns. Selina Gray was a second-generation enslaved person from the Arlington House. Historians credit her for keeping many of the family heirlooms safe during the Civil War and credit her children for helping restore the home by providing details about the house and furnishings.

The Rippavilla Plantation in Spring Hill, Tennessee, features the Greek Revival style. The home was a historic plantation with a 1500-acre farm worked by enslaved people.

Architects built this home in several phases. The owners remodeled the house between 1928-1932, adding Colonial Revival features. It’s now a museum and is open to visitors.

The house is a two-story, red brick structure with symmetrical one-story wings. In 1853, his son, William Giles Harding, enlarged and remodeled the house in the Greek Revival style. He added stucco to cover the red brick and a large porch featuring six limestone Doric pillars. Today this home operates as a museum, winery, and restaurant.

Stanton Hall is one of the most decorative antebellum mansions to survive into the modern day.

The home is a three-story brick building the designers painted and plastered to mimic the white marble of Greek temples. It features a front portico with columns that resemble a Greek temple. The interior is just as elaborate featuring Italian marble, Parisian textiles, and chandeliers of glass and bronze. Stanton Hall is now a museum and event venue.

Antebellum homes have historical significance because of their time in the United States before the Civil War. But this style of architecture has a complicated legacy.

These homes have significant architectural value as part of the broader movement of Greek Revival architecture. Yet, for many, these homes represent oppression, symbolizing the power of enslavers. Therefore, it is crucial to have all members of our society speak to the legacy these buildings represent on an ongoing basis.