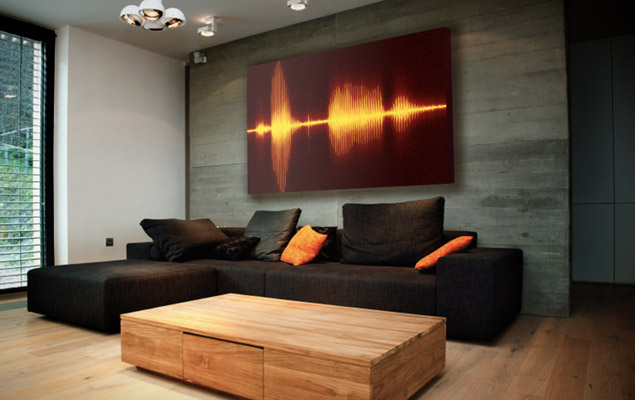 We all have different preferences when it comes to music. Some are more inspired while others would better remain anonymous. Still, everyone has a series of favorite sounds or little bits and pieces of song that they like. How would you like to immortalize a visual image of those sounds? Resonant Décor now allows you to do exactly that.

The idea is actually very simple. A sound that you like is recorded or uploaded and then transformed into a waveform. It’s then given a custom colored gradient design and printed on a high-quality canvas. It’s not such a revolutionary idea but it’s an interesting concept. Every creation is unique and personalized.

Such decorations would be great for theatre rooms, media rooms or in-home studios. The cinemas could also benefit from such a simple and yet eye-catching decoration. It’s not the visual image that is impressive in this case but the idea behind this whole concept. The fact that you know what that image represents for you makes it very special. It would also make a great gift. It’s a visual reminder of something you love and it comes in a simple form. The decorations are available in a variety of sizes and color schemes and the price varies between $200 and $700. It’s simple but special and unique.