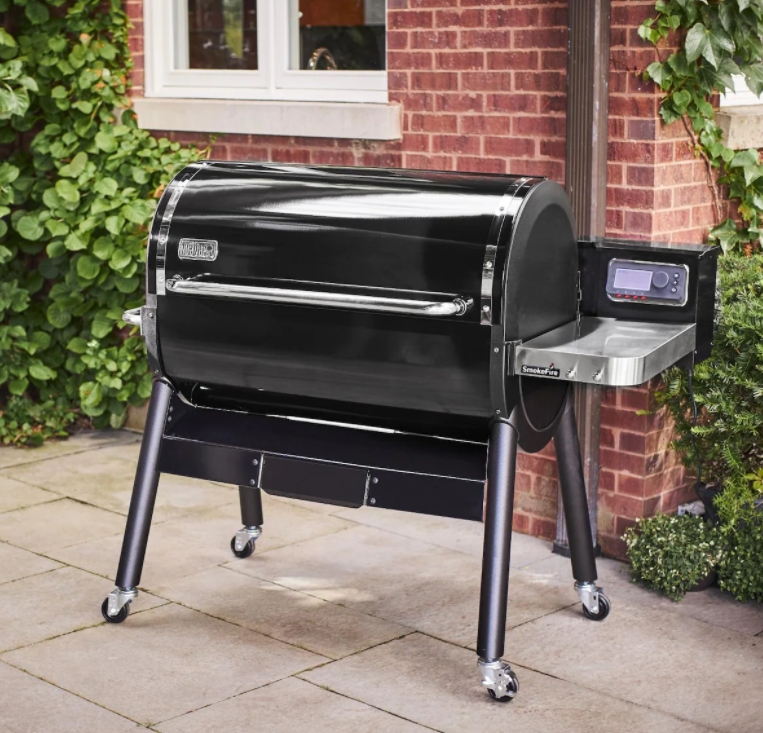 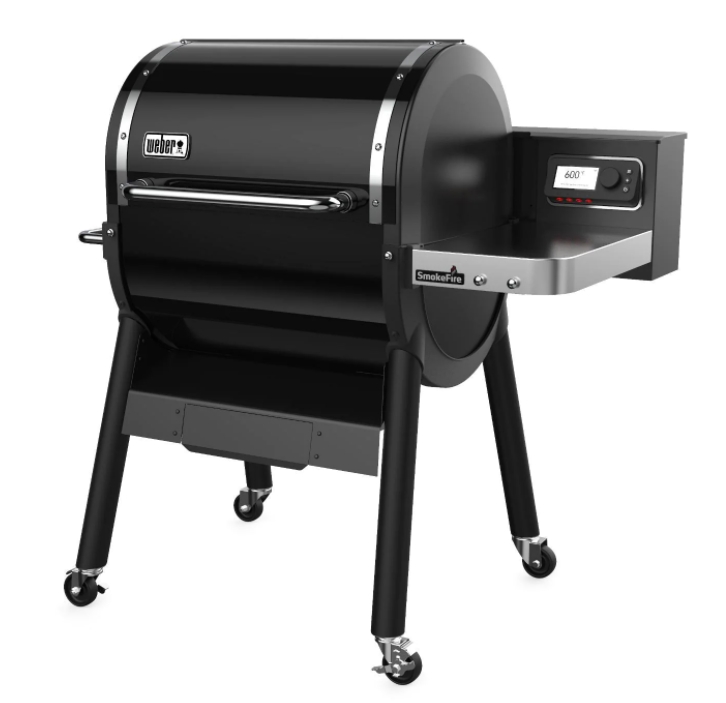 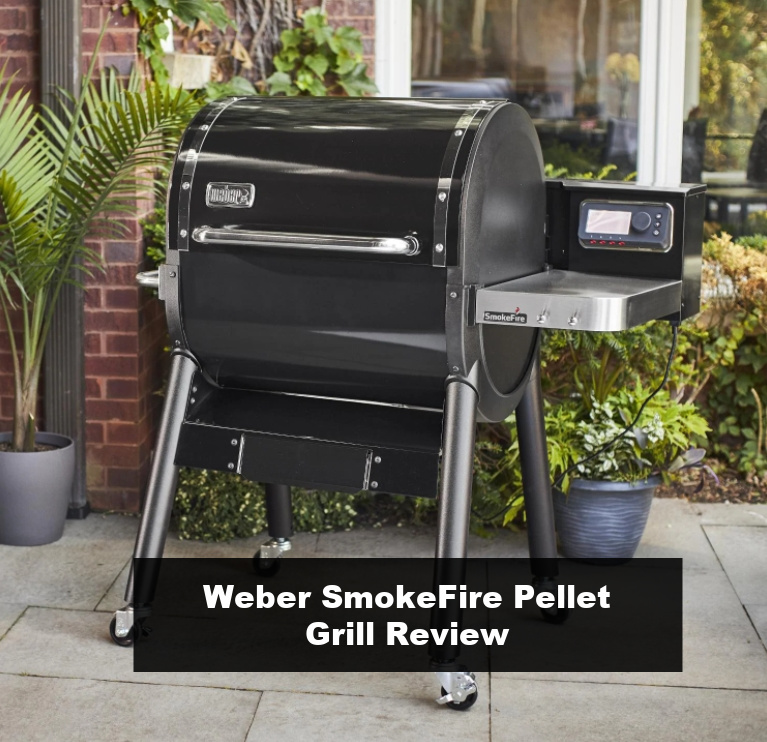 Having made history in the grill manufacturing industry, Weber is a name that’s no stranger to anyone that’s the least bit passionate about grilling their food.

Throughout the decades of innovation, Weber has revolutionized the way people barbecue their meat, introducing concepts such as Bluetooth-enabled thermometers and flavorizer bars that turn drippings into smoke to enhance food flavor. In this Weber SmokeFire review, we are going to be taking an in-depth look at this line that includes two reliable grilling units: the EX4 and the EX6 pellet grills.

Even if Weber is a pioneer in the grill-manufacturing industry, it’s one of the last ones to adopt smart grill technologies. Thanks to the SmokeFire fire, the company is looking to compensate for lost time, offering a unique approach to what smart grills are all about. Promising to have put decades of expertise into the two grills that make up the SmokeFire line, we were very interested in discovering what these two Weber grills had to offer.

There are a few characteristics that put the SmokeFire line of grill on the map, through details that are meant to deliver a quality experience:

No Weber SmokeFire review would be complete without talking about the wi-fi capabilities of this line. Because it’s a smart line of grill, the two SmokeFire products are compatible with the company’s Connect app, promising remote control operations and important notifications so that you don’t have to supervise the grill every step of the way.

The app is compatible with Apple and Android smartphones and will provide a detailed setup process with explanations that you will guide you through the installation. It would seem that the app has some pretty basic features, such as temperature display (both current and the one you set up yourself) or the ability to set the cooking temp for the integrated meat probe.

Some of the notifications that the app can receive include grill temperature reach alerts, cooking temp completion, or low pellet warning. One of the downsides is the fact that the app is clearly still a work in progress, since most of the errors that you receive are very vague so you might not know what the problem is once you’ve received the alert.

However, it is also important to note that the app has been significantly improved compared to the version tested at launch, and it’s pretty clear for everyone that Weber will be adding even more cool features.

One of the two products that are part of SmokeFire’s lineup is the SmokeFire EX4 Gen 2, an improvement from the old version of the same product. This Weber SmokeFire pellet grill was clearly aimed at solving the problems that people reported with the previous model, so let’s take a deeper look at what it has to offer.

The full-coverage heat bafflers were replaced by the company’s flavorizer bars, an improvement that was needed in order to hold steady smoking temperatures, but also cook at high heat when needed.

Made from genuine 304 stainless steel, there is so much to be appreciated when you judge the EX4 Gen 2 from an aesthetic and construction point of view. There is an air gap located in the double-sided walls which holds temperatures steady because of quality insulation. However, some people complained that airflow got into the ash system, but expert testing showed there is no need for concern in that area.

As we mentioned in the previous section, this Weber SmokeFire pellet grill takes a lot of pride in its new grease management system. Weber managed to pull an impressive 2-in-1 construction by embedding the ash and grease drawer in one place, the design choices were pretty poor in the original model.

When talking about the cooking performance of the Weber SmokeFire EX4 Gen 2, things get even more impressive. Capable of reaching a temperature point of 600 degrees (which is a pretty shocking thing to see in pellet grills), the even heating makes this one performant grill. The 600-degree temperature mark can easily be reached by controlling the variable speed fans and large air vents of the unit.

The hopper has the capacity to hold up to 22 pounds of pellets, which promises to provide you with more than two hours of cooking at the grill’s highest temperature capabilities. There is a stainless steel side shelf that delivers more space for you to prep meals and hold your cooking tools, but you can also take advantage of the hanging knobs designed for your accessories.

The SmokeFire EX6 Gen 2 is another clear example of how much effort Weber makes in listening to its customer feedback, as the original model has a bunch of flaws that have been fixed almost entirely in the newest model, so we have to mention them and give credit where credit is due.

The Weber app has received a lot of significant updates from the initial version, with features such as smoke boost (creating high smoke environments inside the grill) and additional meat options in the cooking section of the app. Regardless of the pellets used, the grill can now reach 600° F each time you’re looking to sear meats to perfection.

That being said, let’s look at some of the most important characteristics of this grill. The temperature range of 200 to 600 degrees is impressive, especially since recent updates make it easier to reach the highest temperature mark.

The pellet hopper has the same 22-pound capacity as the EX4, feeding pellets into the auger that operates at variable speeds. The incline will make it so that the feeder never experienced any jams, offering a seamless cooking experience that we admire. The 1,008 square inches of cooking area are impressive, to say the least.

The plated steel cooking grates are distributed on two levels, making sure that you can manage your cooking space efficiently for different kinds of food that you might be looking to prepare simultaneously. The grill’s body is constructed with porcelain-enameled steel, making it easy to clean the surface and bringing you one of the most durable pellet grills on the market. The flavorizer bars that have been added to the EX6 Gen 2 are here to make sure that heat is evenly spread across the cooking surface.

The easy cleaning system makes sure that grease and ash flow down into a removable drawer, so messy grease buckets are completely eliminated from the equation. The grill is placed on top of casters, two of them being movable and the other two, lockable.

As mentioned before, the app has clearly improved from its initial version, which is really important for a line of grills that built up a lot of hype around its launch, only to disappoint a lot of experts that were excited about the initial testing of either of the two grills in the SmokeFire line. The grill is also equipped with an LCD display that’s weather-resistant and offers information that’s easy to read.

There are a lot of things to be said about the Weber SmokeFire line of grills, and one of the most things to mention is that what started about as an overly-hyped launch that quickly led to disappointment is now finally living up to the original hype. Both of the grills in the lineup have pros that completely outweigh the cons, delivering a high-quality grilling experience at temperatures that can easily reach 600 degrees.

The grease management system on these two models make cleaning the grill a breeze, with no external grease collection buckets and nothing that could be remotely unaesthetic. The initial version of the app left a lot to be desired, but the continuous improvement of what was a really faulty app is slowly turning into something that grants you more control over the remote cooking capabilities of the EX4 and EX6 grills.