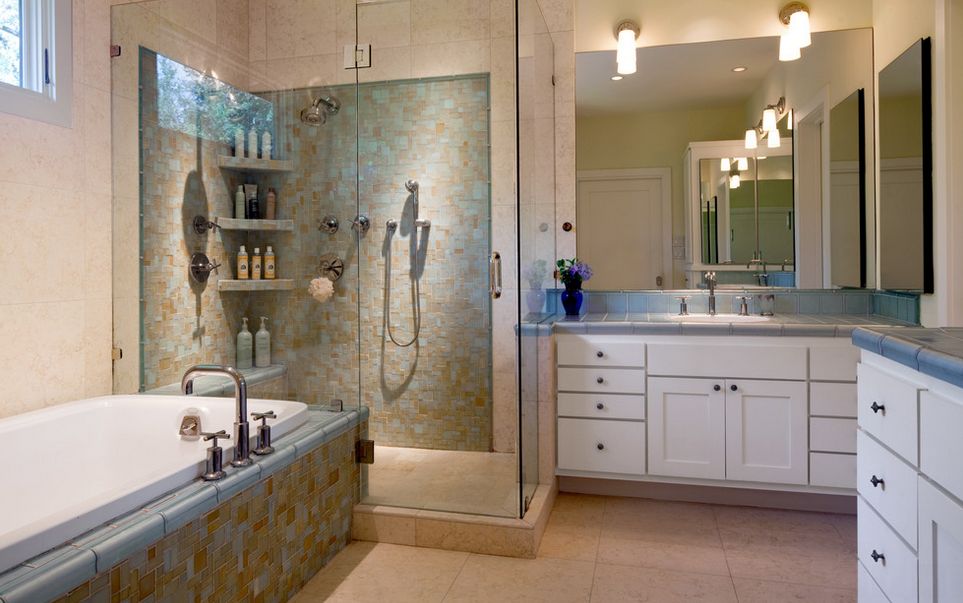 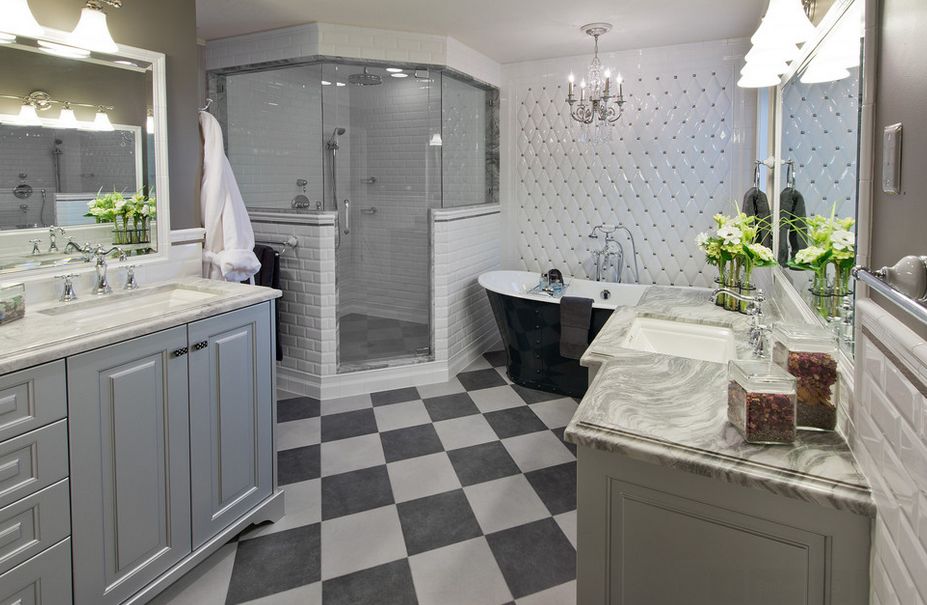 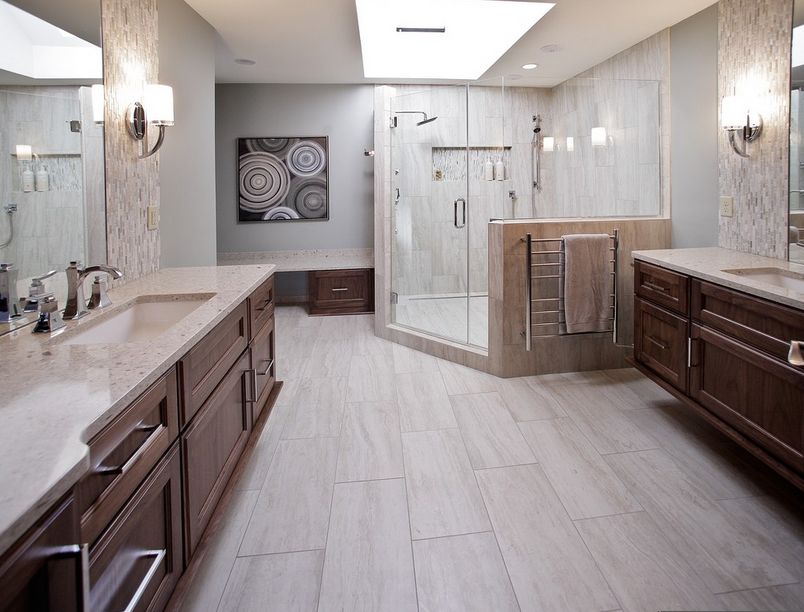 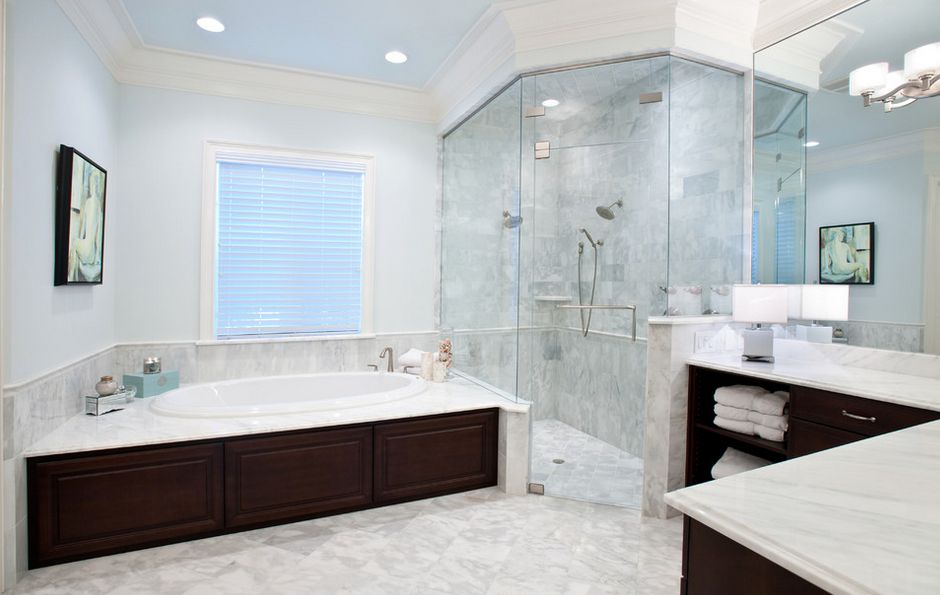 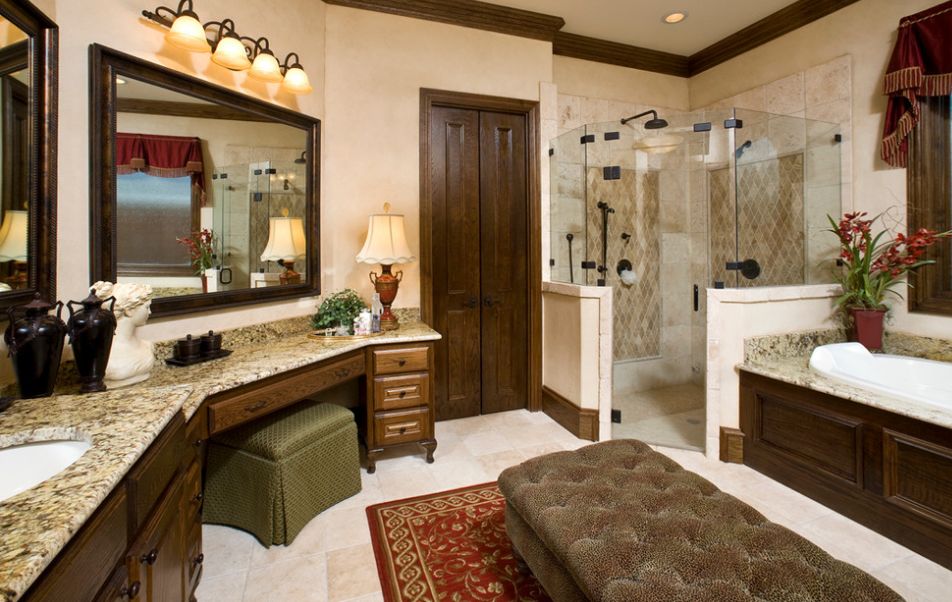 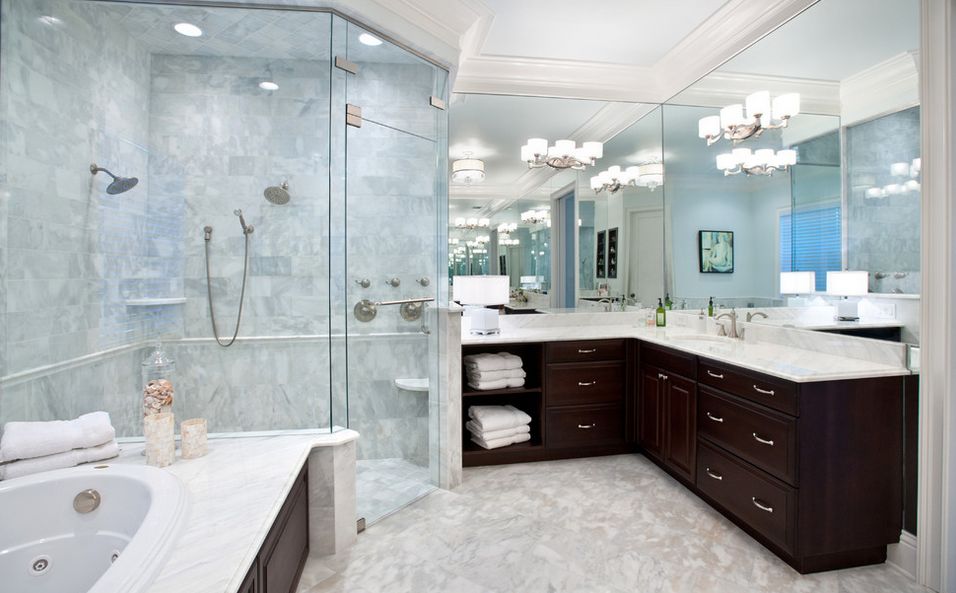 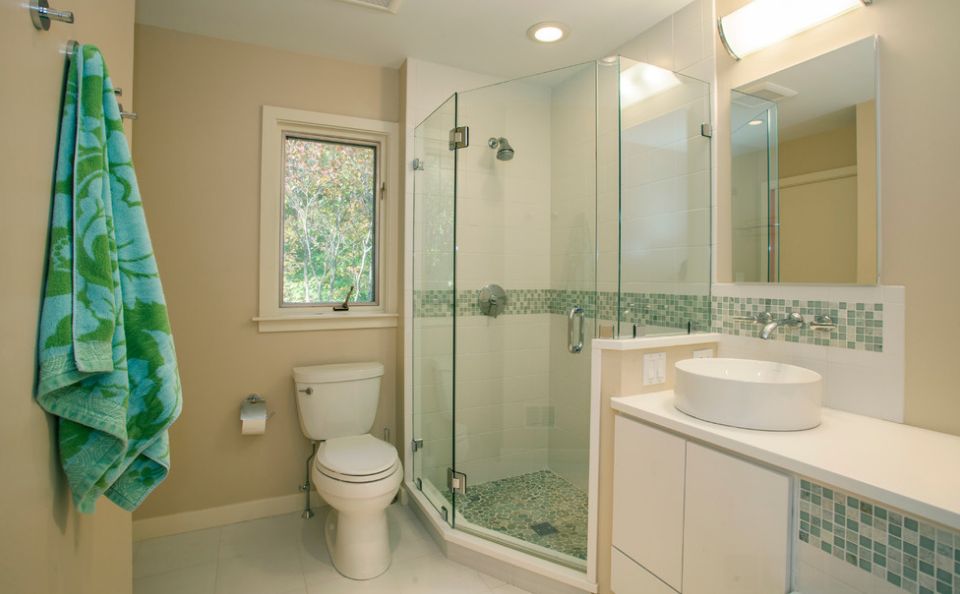 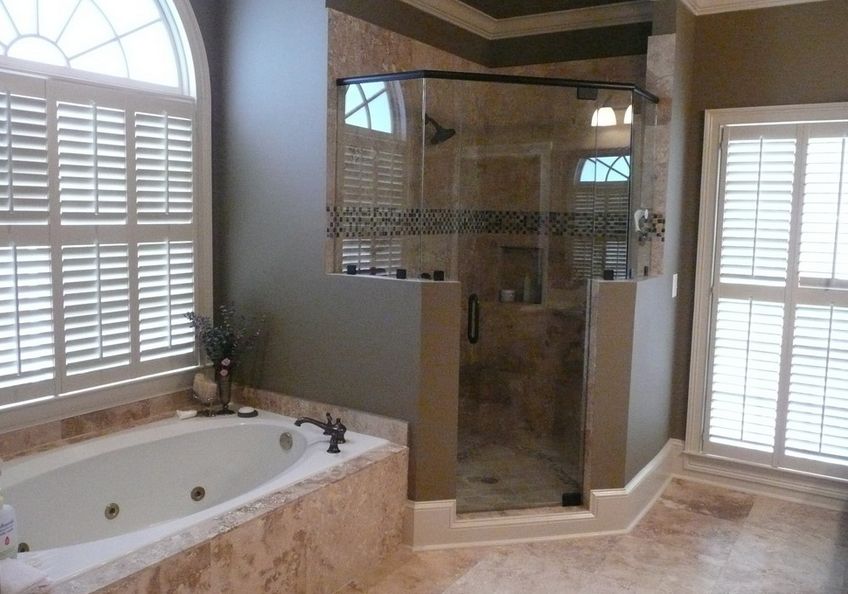 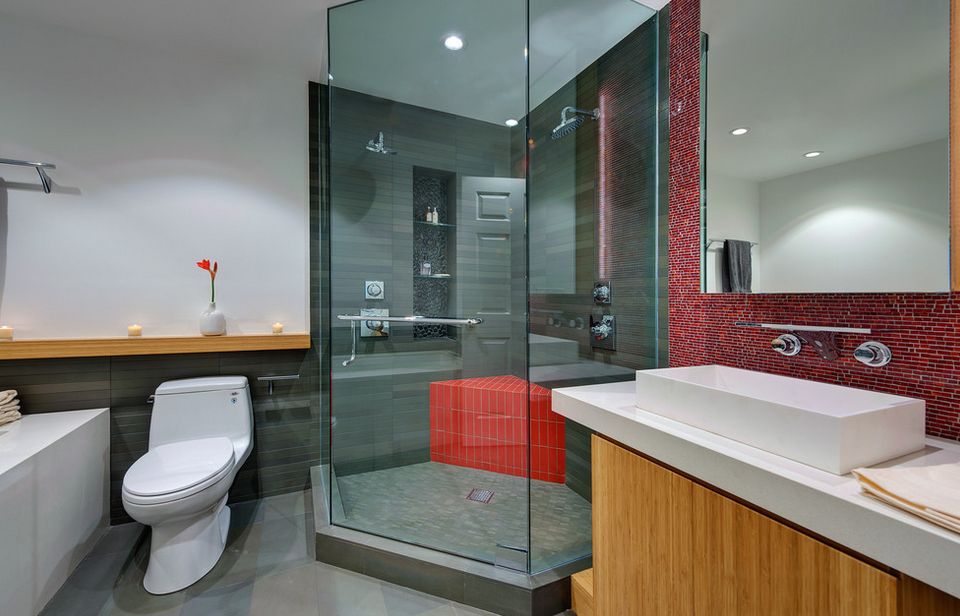 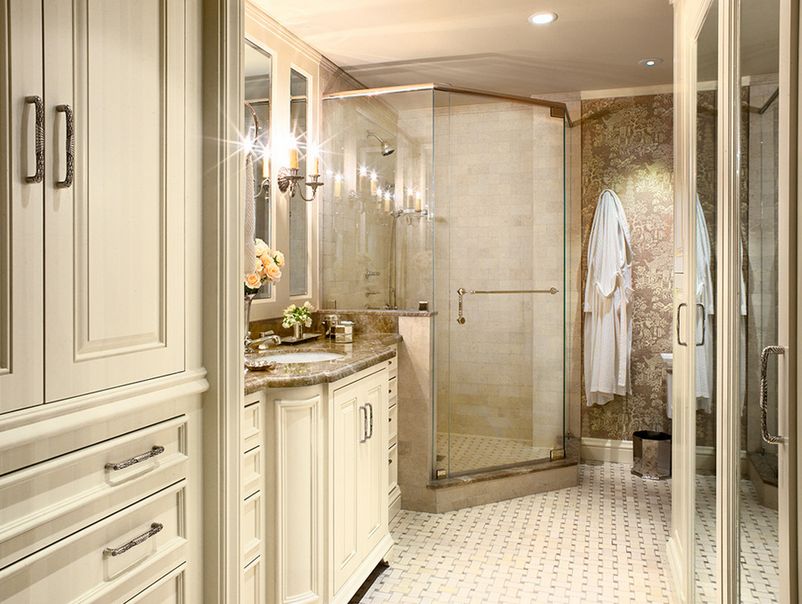 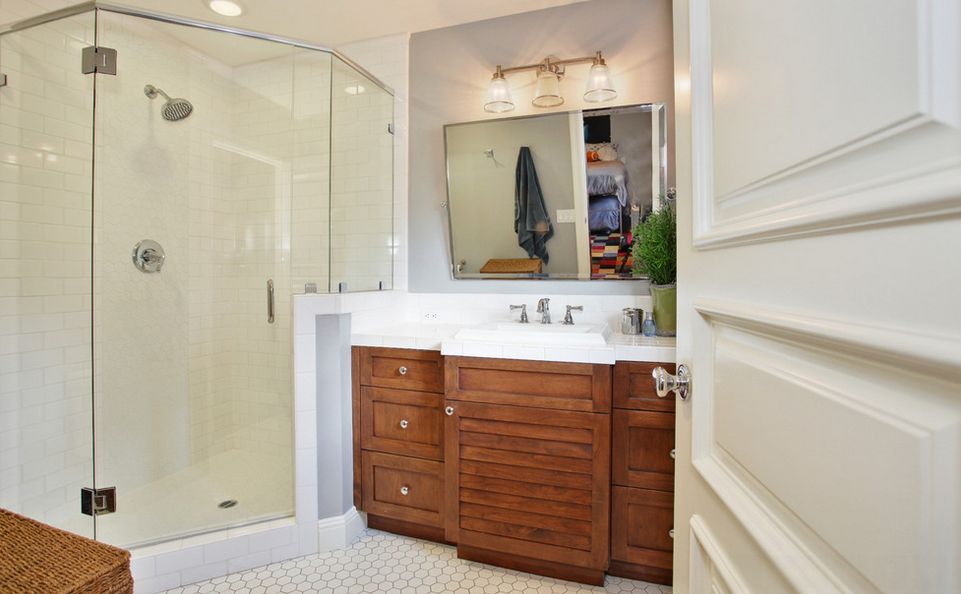 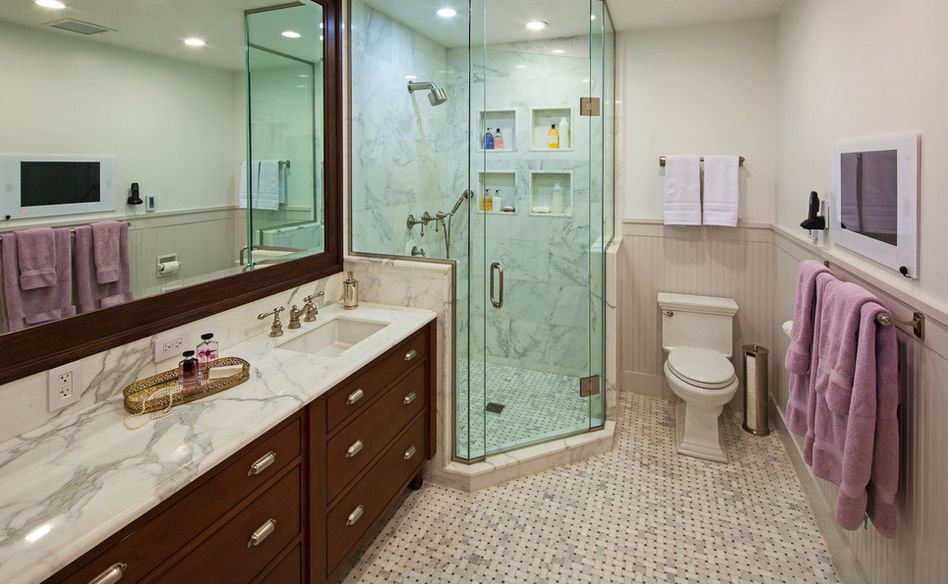 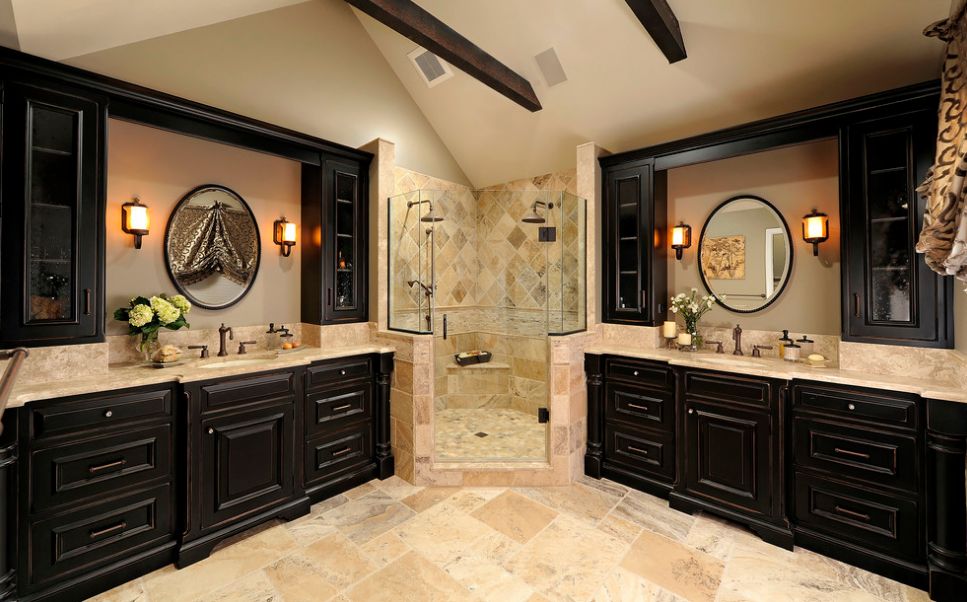 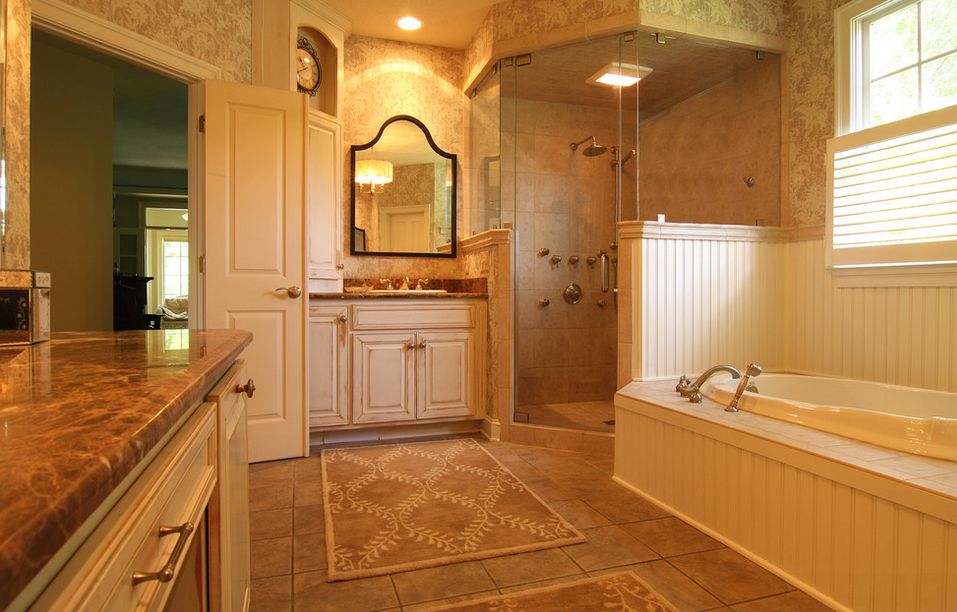 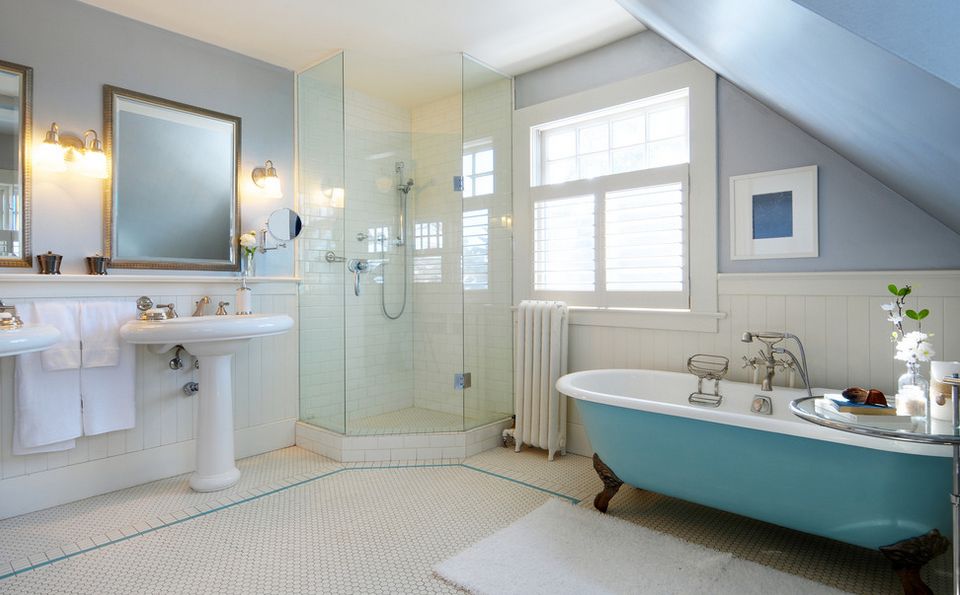 In the larger areas of the house such as the living room, space is not usually a big problem and, as a result, corners are often left empty. The occasional bookshelf or potted plant are sometimes introduced here to fill the empty spaces. But smaller areas such as the kitchen and the bathroom require you to carefully plan the design and to use every little bit of space. As a result, corners become more than just extra niches you can explore only when needed. A corner shower, for example, would be quite the space-saver.

Corner shower niches take advantage of often unused space and thus allow you to more easily organize the rest of the bathroom, having more room for a freestanding tub or for additional storage.{found on lifesevenphotography}.

This traditional bathroom features a very practical interior design, where the corner shower and the tub are used as a combo, although they each maintain their individuality through their designs.{found on crinerremodeling}.

There are tons of different designs and styles to explore, even when the shape is somewhat restricted by the fact that the shower is placed in the corner. It’s even possible to customize the unit. For example, a modern take on a Roman shower could look really great.{found on davidaskitchenandtiles}.

If the bathroom is small and placing the shower in the corner was a space-saving solution, it would be practical to opt for a transparent glass structure as not to obstruct the overall décor and the ambiance, allowing the room to stay bright and fresh.{found on theahomeinc}.

An alternative is to give up the bathtub and to gain space with a corner shower, being able to then add additional storage, a comfortable bench or another useful feature and to thus reorganize the bathroom into a savvy space.{found on savvyinteriors}.

The positioning of shower niches in the corner allows the entire bathroom space to be reconfigured. In some cases this is even a requirement and not just a way to restructure the room to gain more space or easier access to the shower.{found on tresmckinneydesign}.

Modern bathrooms make great use of cool shower designs, emphasizing this feature through all sorts of creative elements such as a colorful corner bench in a contrasting and bold shade.{found on michaeltauberarchitecture}.

Custom showers can feature a variety of dimensions and shapes. Taking into consideration that the shower would be placed in the corner of the bathroom, a hexagonal design would be both practical and good-looking.

But the way the shower is positioned is one of the elements which can possibly allow a bathroom to look and feel more spacious. The choice of colors and materials is also important. Light shades and fresh accent colors are successful combinations.{found on rudloffcustombuilders}.

Of course, corner shower units are not suitable options exclusively for small bathrooms. In fact, the larger the bathroom is, the more spacious the shower can be as well and the more options you have in terms of design.

Whether it’s a doorless shower or any other kind, there are enough design possibilities to make the unit fit and coordinate with the chosen style. A combination of materials could suit an eclectic or traditional bathroom.{found on dorisyoungerdesigns}.

Modern and contemporary interiors focus on simplicity and usually glass is the preferred material for shower units. They maintain an open and airy look throughout, emphasizing the spaciousness of the room.{found on verandahomes}.

A large shower stall placed in a corner can serve as an accent element in a contemporary bathroom, especially if the room is large enough to allow each individual feature to stand out in its own way while maintaining cohesiveness throughout.{found on abandk}.

A good strategy for making a limited bathroom floorspace seem larger is to draw attention to a patterned floor or an accent wall, leaving the rest of the features neutral.{found on solsticedesign}.

One way to make the most of your bathroom corners is to have a corner shower combined with a corner storage niche. This can even allow you to create a somewhat symmetrical design.{found on cravottainteriors}.