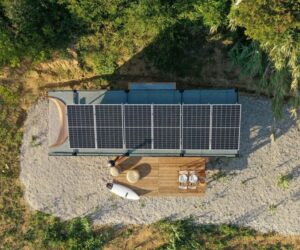 A lot of apartments, both old and new, seem to lack a certain understanding of basic layout requirements users have. Take this 50 square meter apartment in Sao Paulo for example. Apart from the fact that it’s pretty small, it also had a badly-planned interior where the bedroom which is the most private of spaces was positioned along the main facade which is facing the street while the social zone was situated on the other side of the floor plan. It was only in 2017 that this finally changed with the help of Vão.

The apartment is situated on the top floor of a three-level building. Its owners wanted it most of all to rearrange the interior spaces by basically shifting the bedroom from the street-facing facade to the side facing the garden. This way the private area would benefit from a more quiet environment and a better-suited view. This rearrangement was meant to isolate the sleeping area from the rest of the apartment.

The architects managed to make the transformation almost without demolition by extending an existing wall to shelter the bedroom entirely. The relocation benefited the whole apartment. The new layout and the new proportions of the spaces make more sense than the previous ones and allow the volumes and the natural light which enters each one to be better balanced.

The new living room is open to the dining area and the kitchen and has direct access to the balcony. Its walls and ceiling are white and the floor is light grey. There’s actually something really cool about this particular section of the apartment. The new arrangement of the spaces allowed for a small additional space to be integrated. It’s at the top, just under the ceiling and it’s a small nook which can be accessed via a metallic ladder.

In addition to enlarging the living area, the architects also managed to put an emphasis on its openness by furnishing it with metal units, more specifically a 3.5 meter long module which provides storage for electronics and collection items. A long shelf up on the wall hols the owner’s entire book collection. Further more, since there was no need for a laundry room given how the building has one on the ground floor, this made room for a big pantry cabinet. The open cubby built into it is a quirky little detail which makes the apartment’s new interior design even more adorable.

The kitchen is small but has plenty of storage inside the white wall-mounted cabinets but also in the compact counter module. Two sleek open shelves ensure a well-organized a=workspace and the big appliances each have their own place. The bathroom sits at the back of the apartment along with the bedroom which is now facing the inner courtyard.