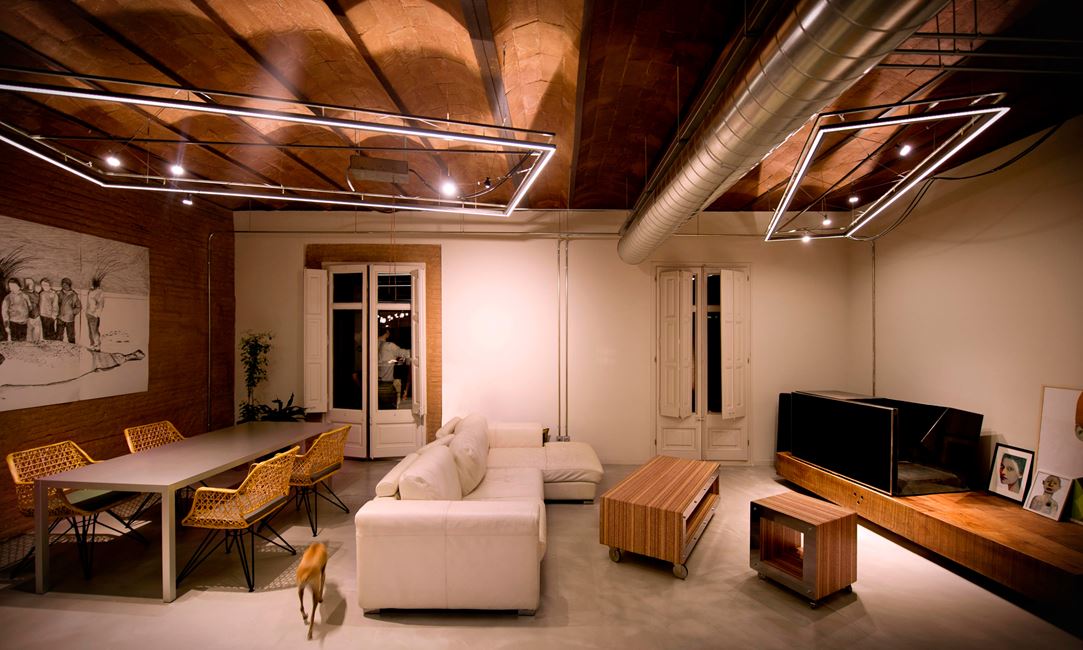 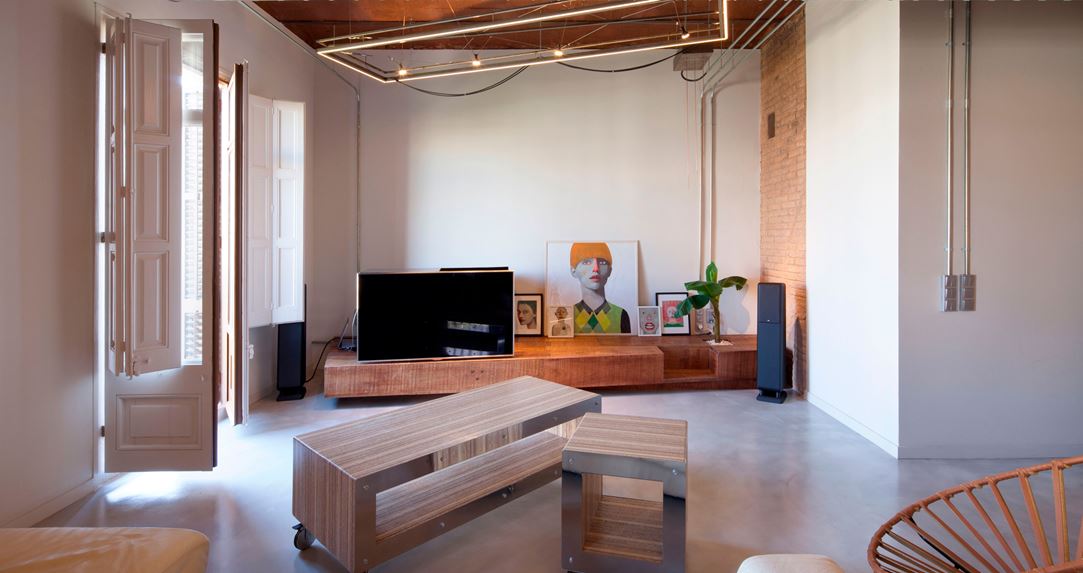 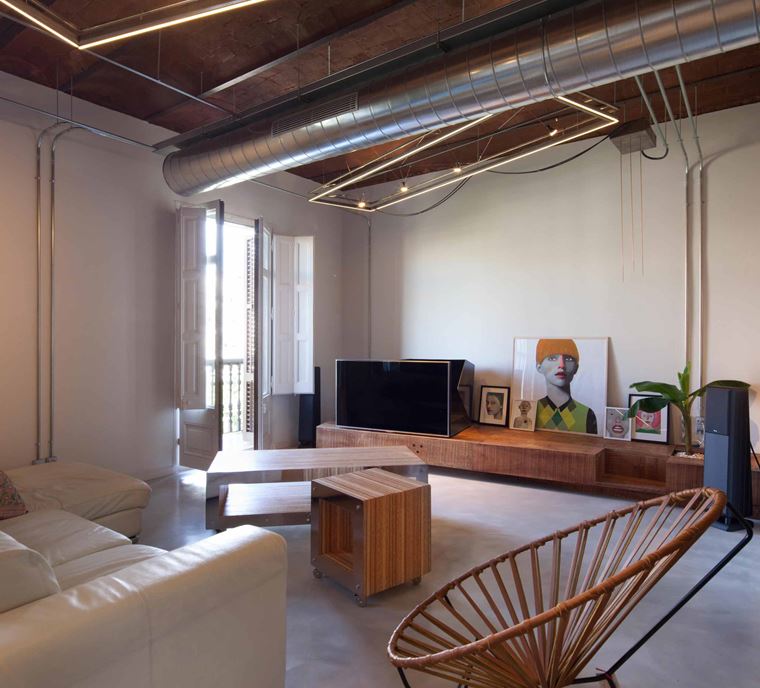 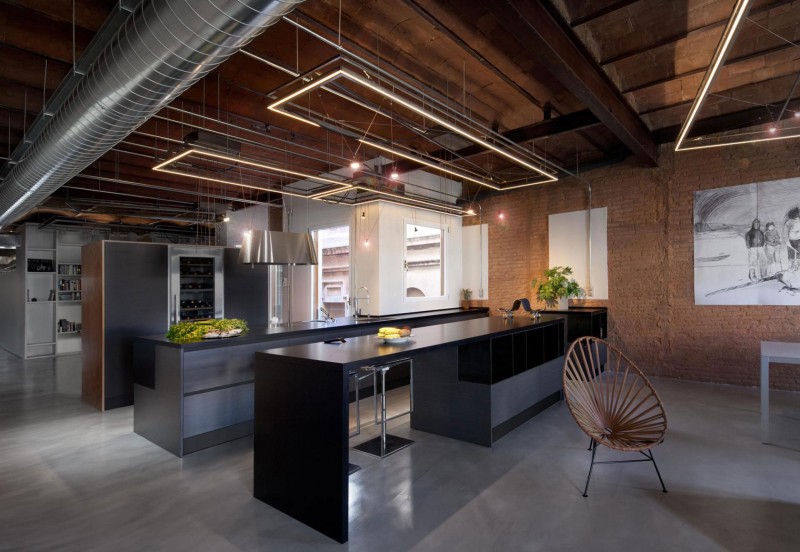 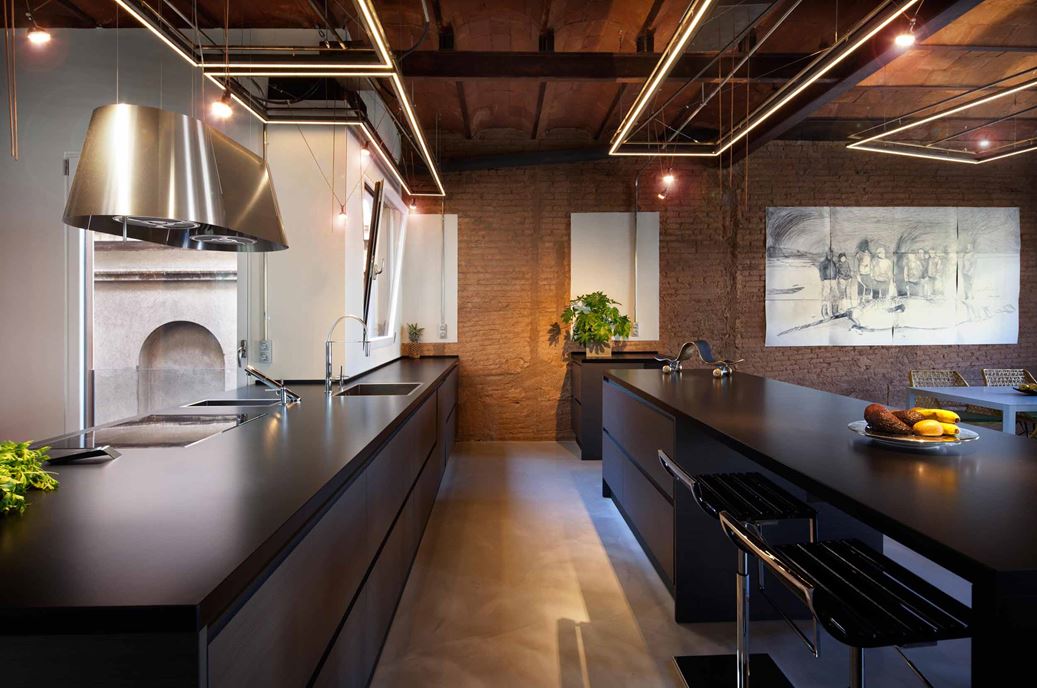 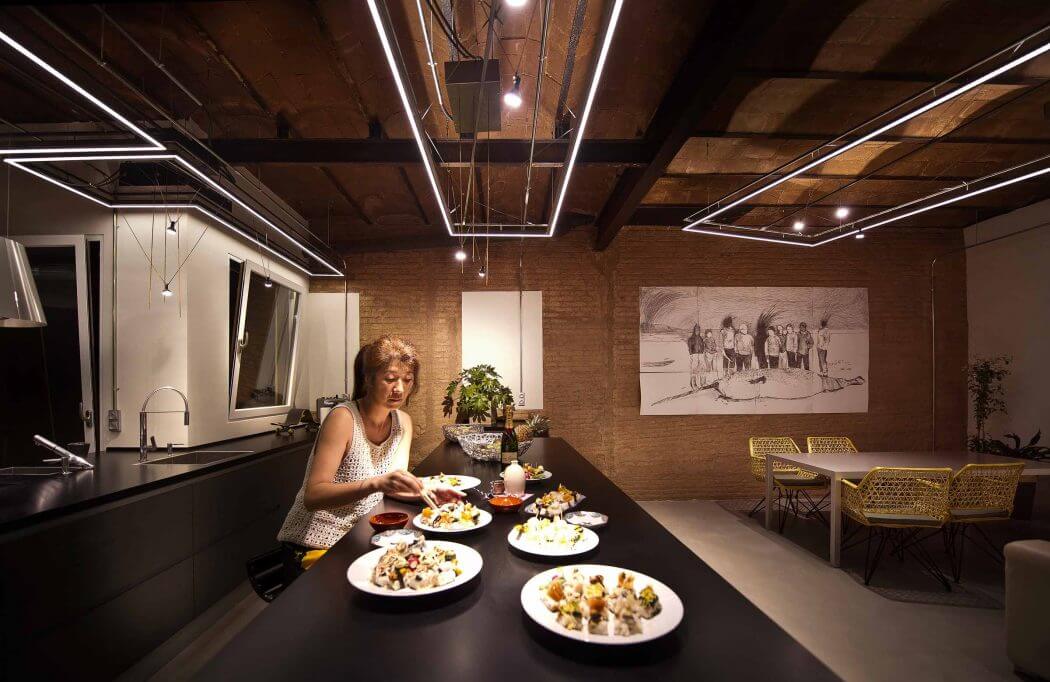 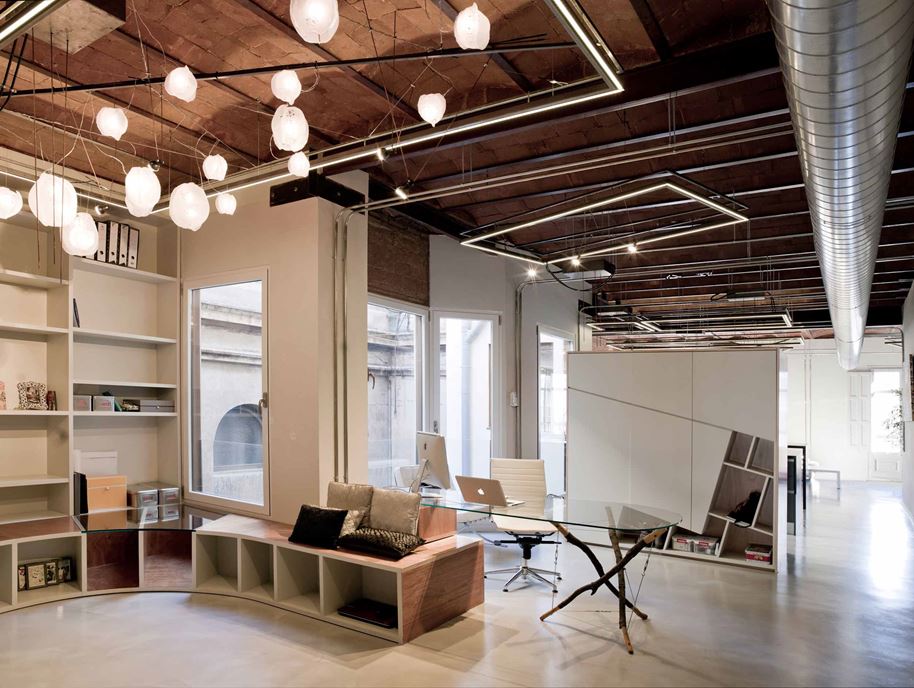 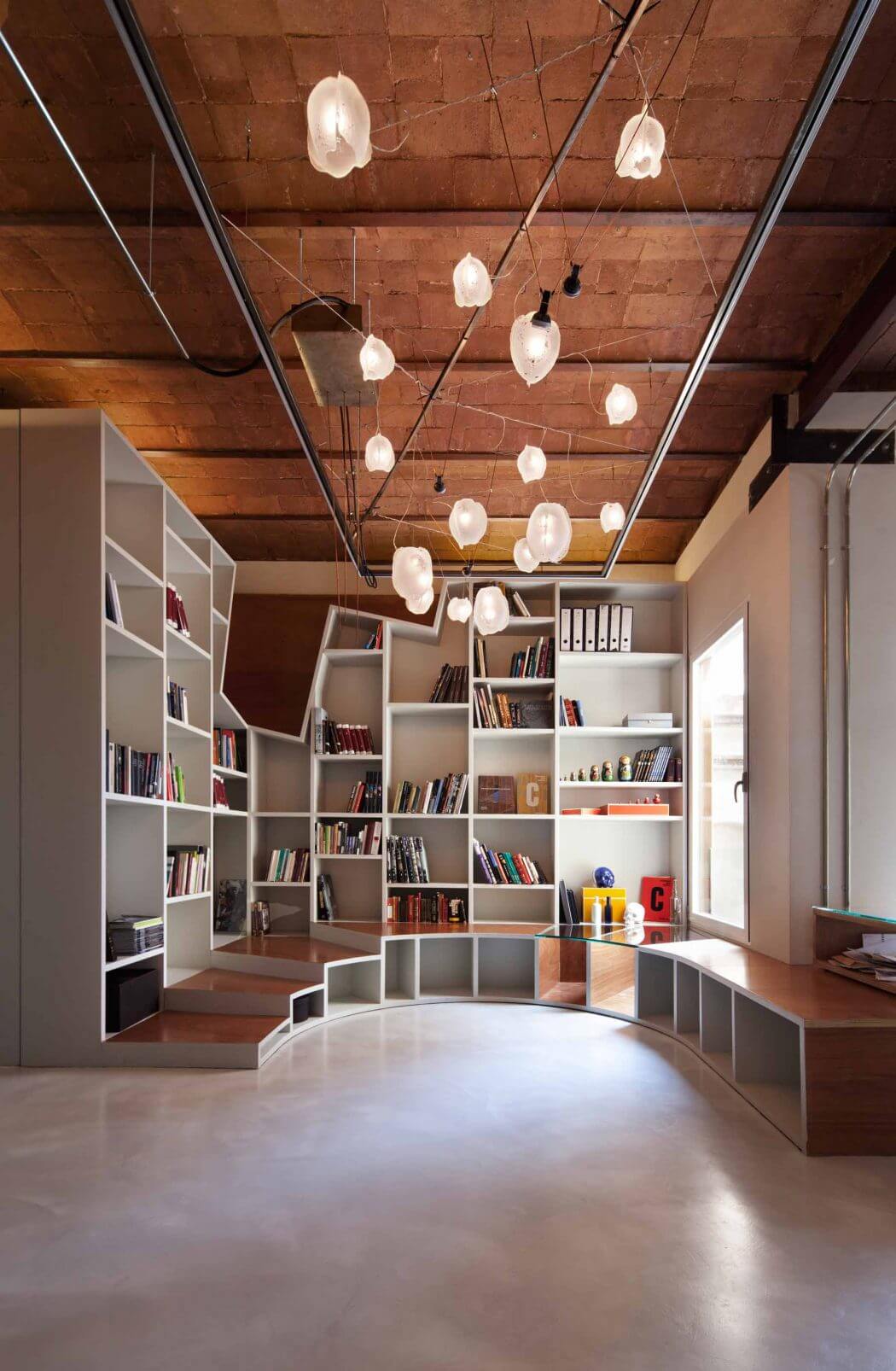 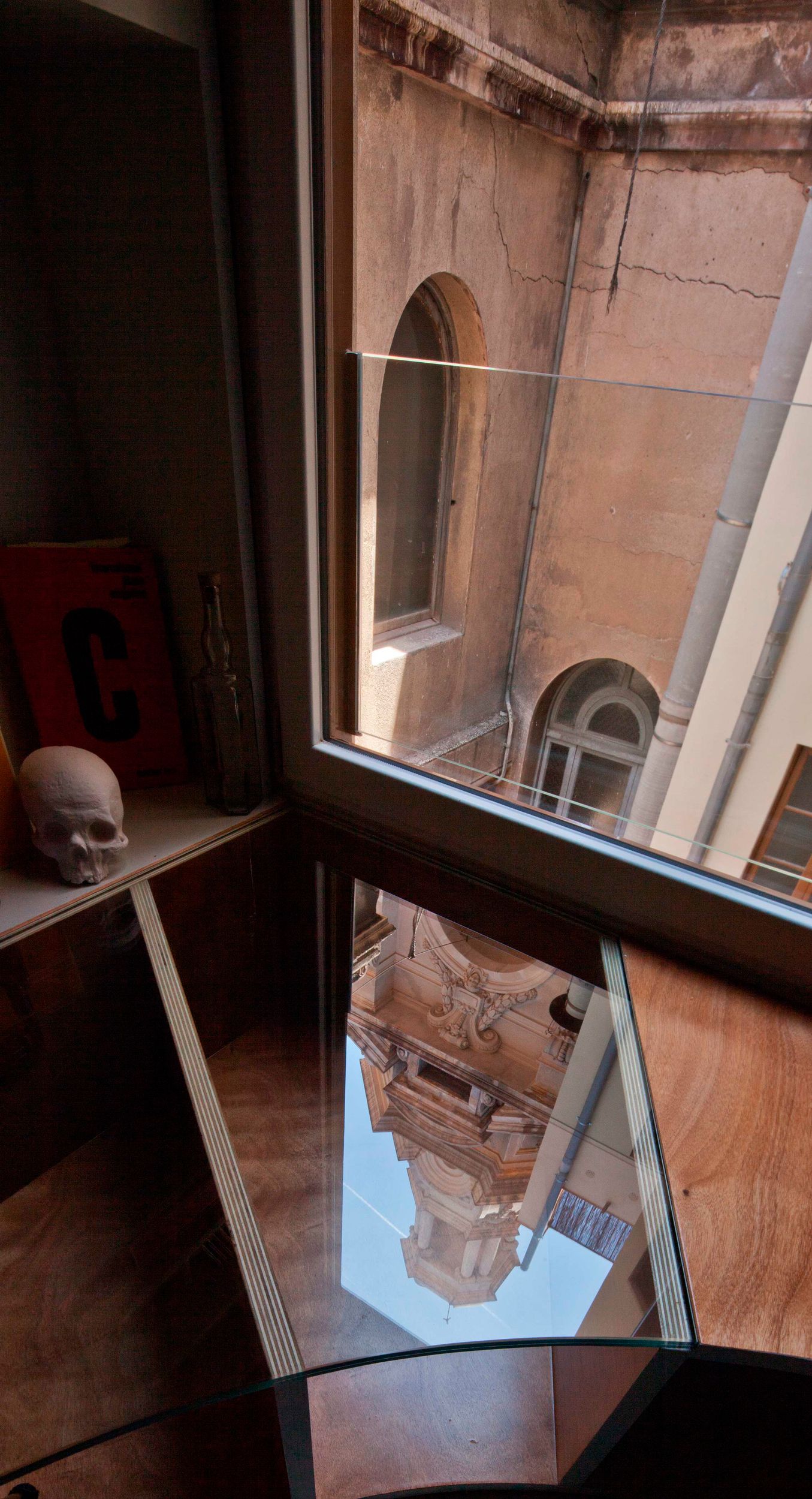 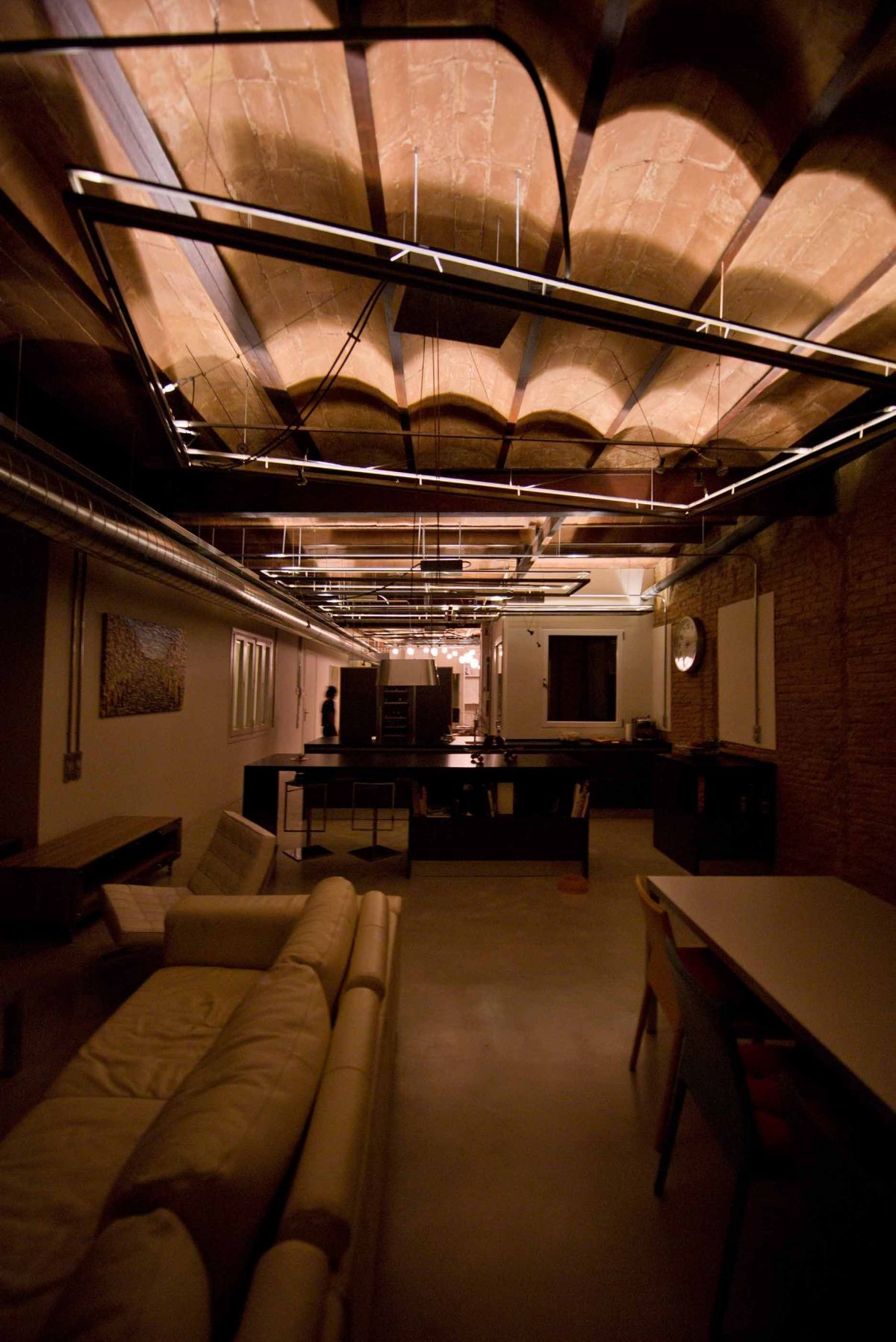 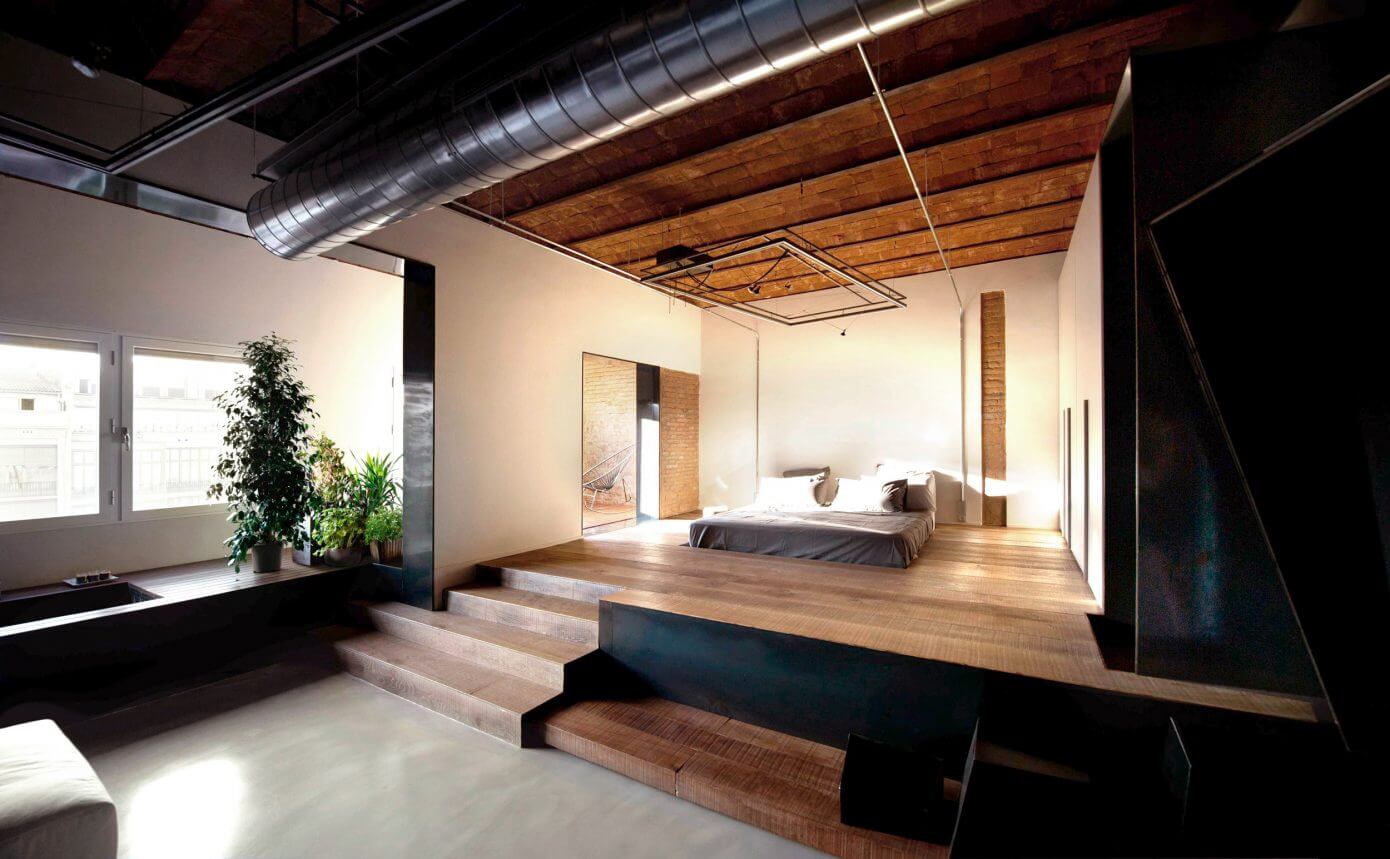 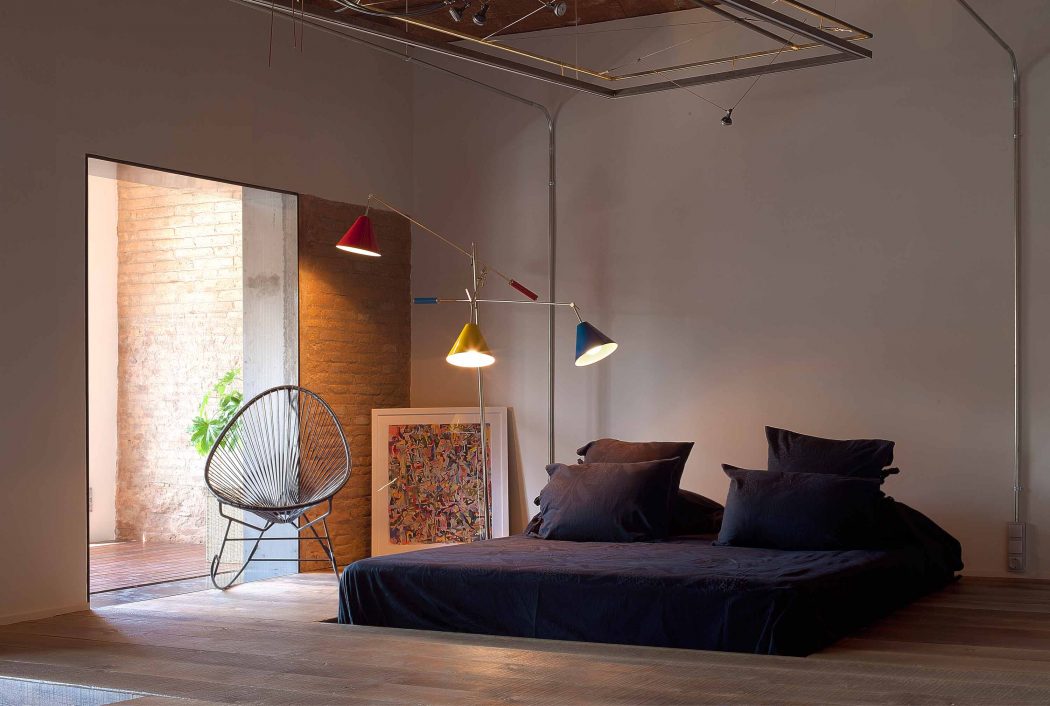 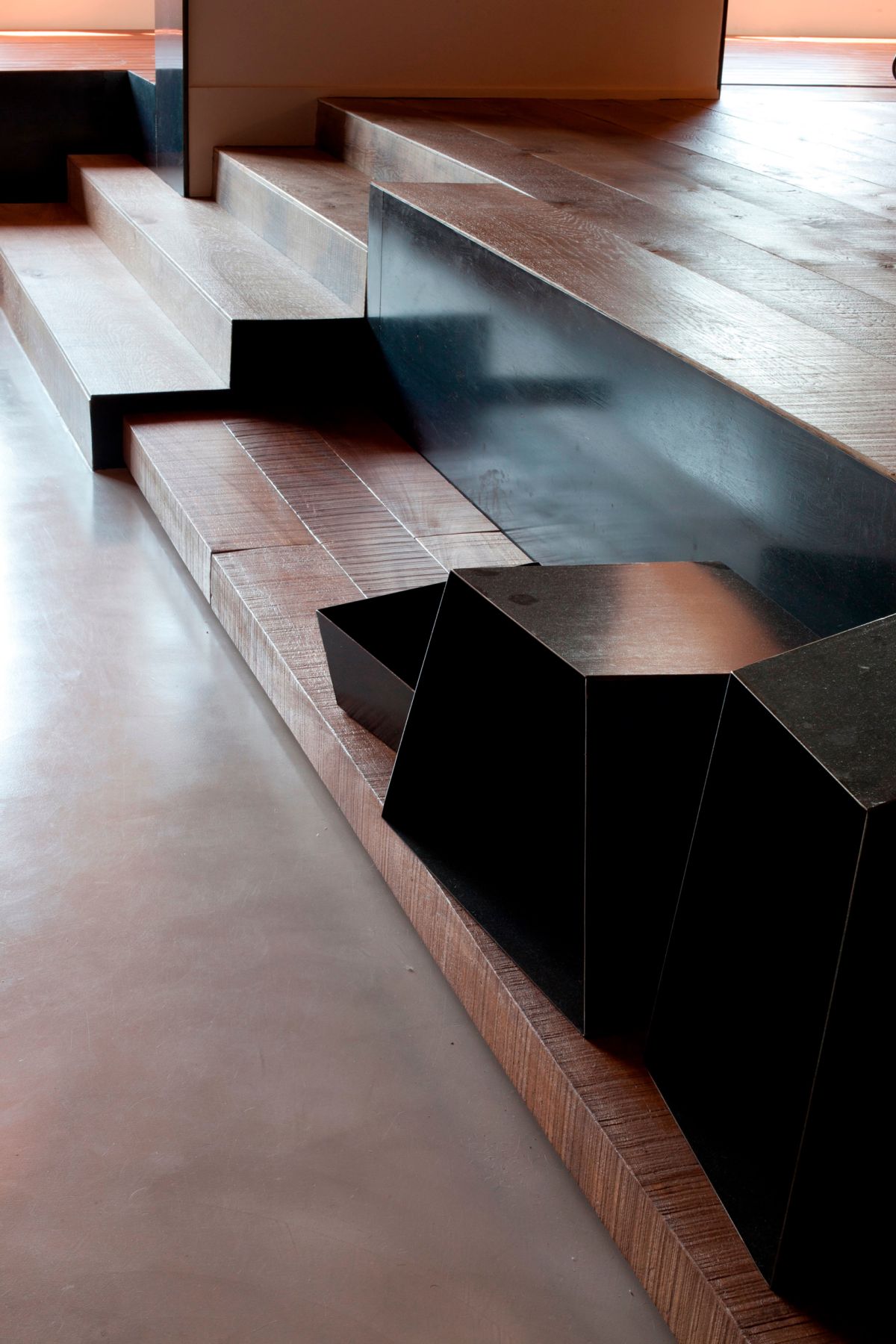 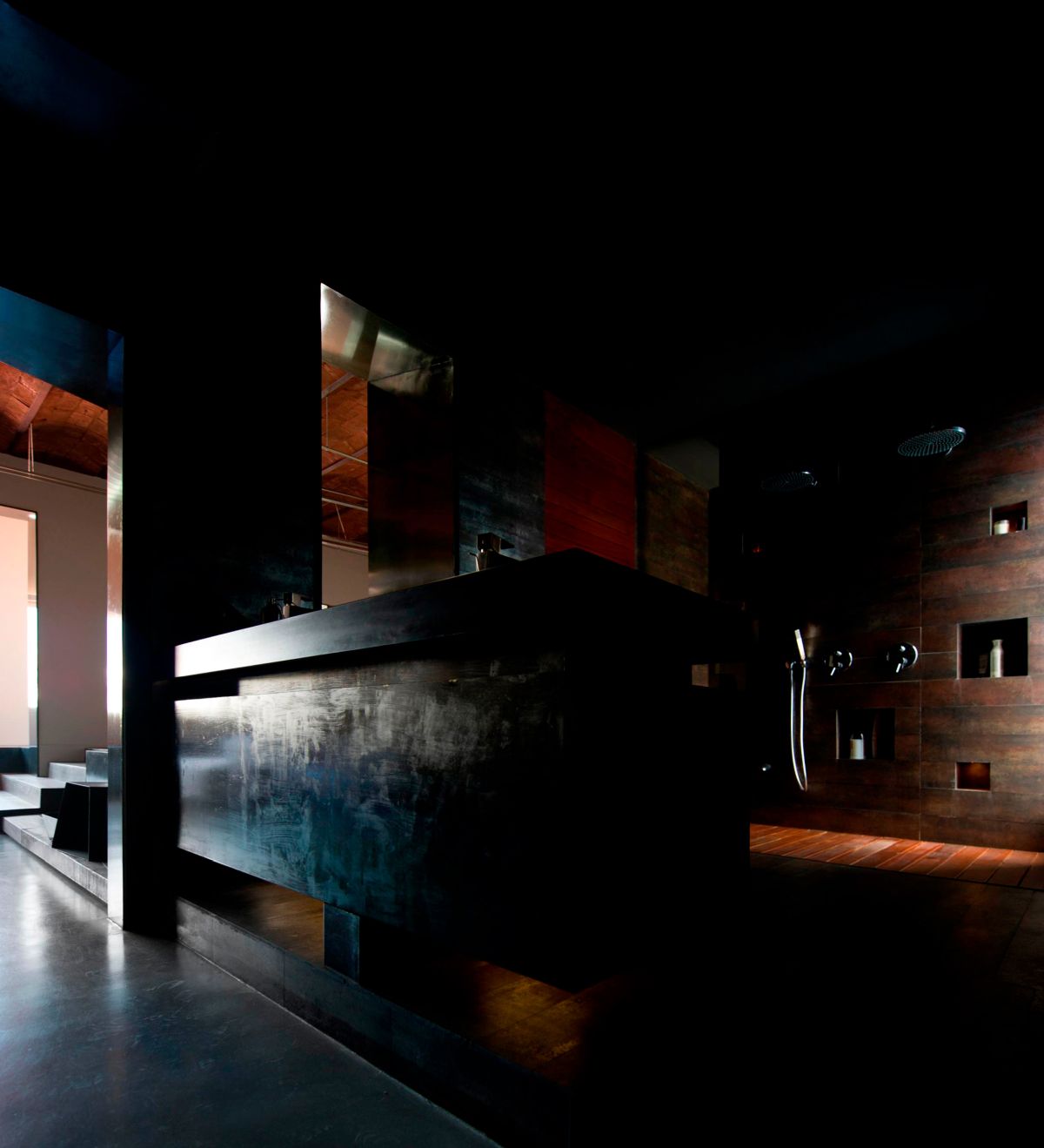 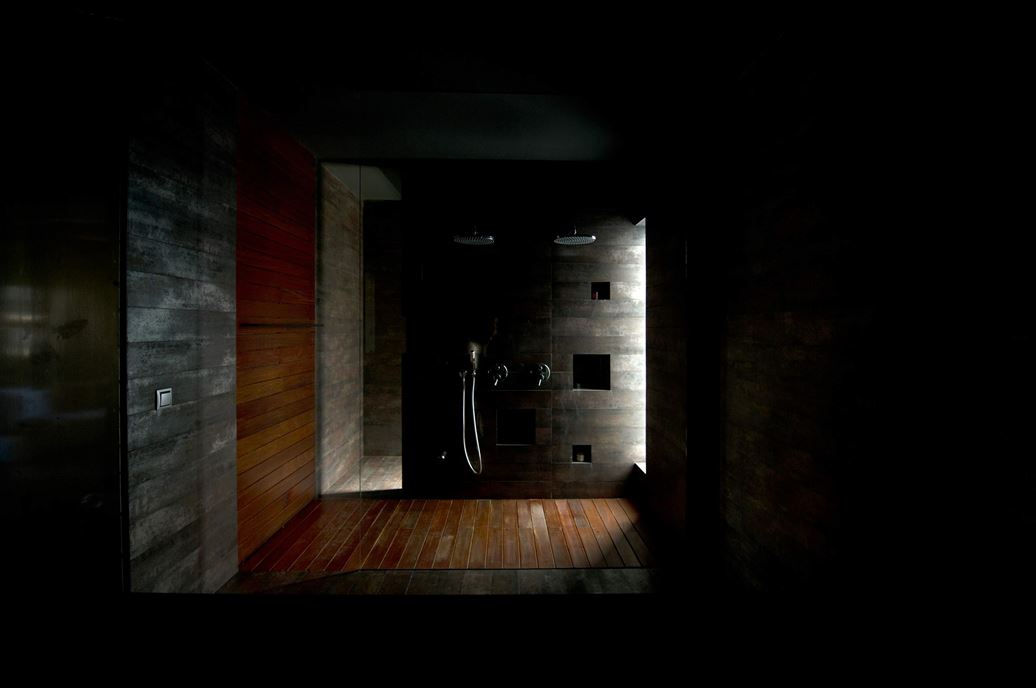 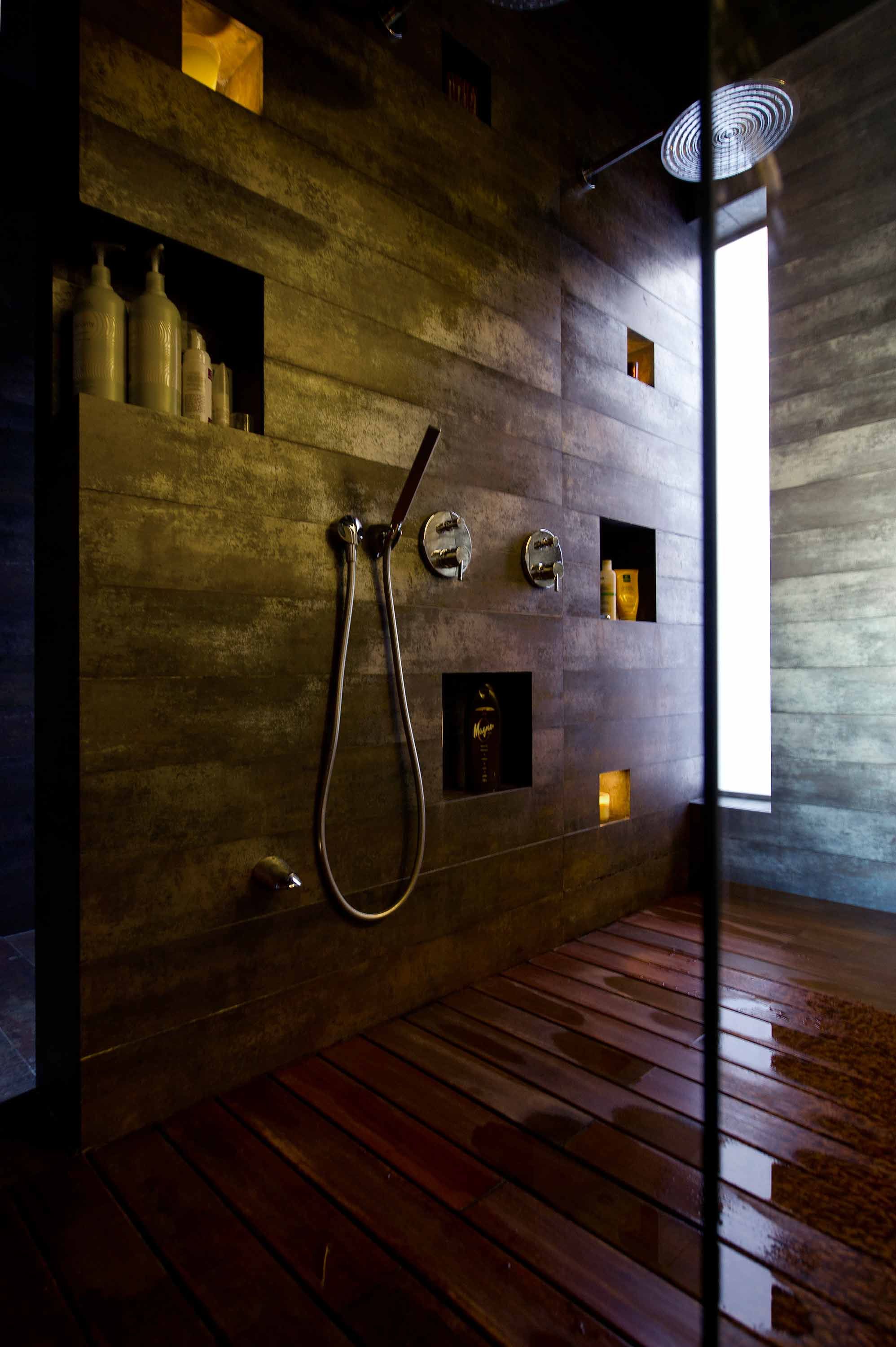 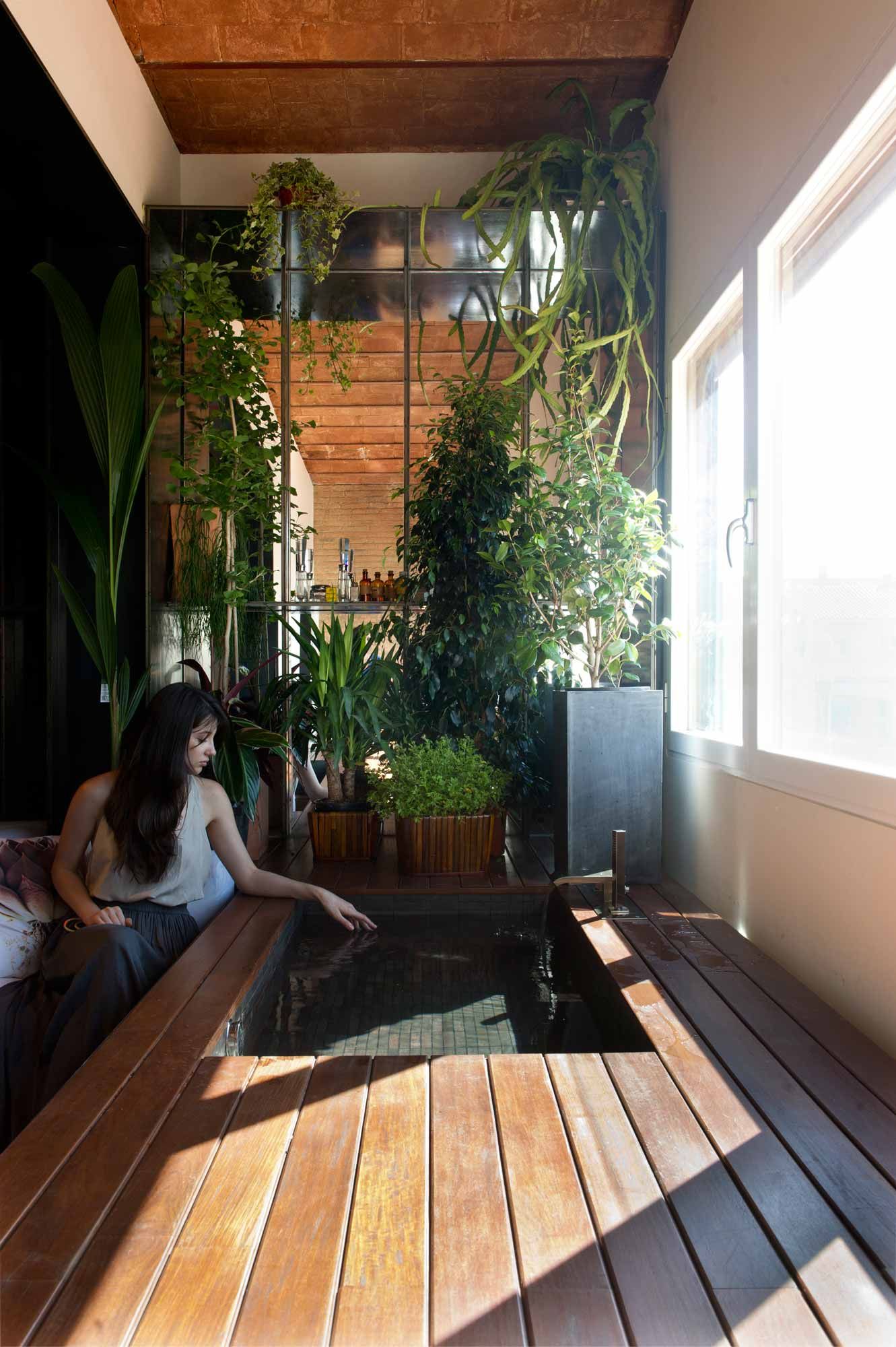 The juxtaposition of a historic building and a modern interior is sometimes jarring but not in this Barcelona apartment. The city itself is fertile ground for avant-garde design and and architectural firm Cometa has created a gem of an award-winning home in the heart of the city’s Art Nouveau district.

Located in a historic building that has undergone a number of upgrades and renovations, Cometa stripped the space down to its bare bones and designed a custom apartment that features unique elements like the original brick walls and large windows. In fact, the tear-down created a long open space that has been visually divided into open-plan living that includes everything the owners might need.

The 250-square-meter space has high ceilings and open, industrial style ductwork that adds edginess to the rooms and unifies the connected spaces. The floor, made of a special microcement, is used throughout the space, linking all the parts that have their own style. Much like its modular style, the furnishings are also modular, including the coffee and side tables. Designed as units on wheels, they can be moved through the apartment as necessary, increasing their functionality.

Next to the living space is the kitchen area, which is freestanding without dividing walls. The open plan includes a unit that houses the refrigerator and some storage, but otherwise the upper sight line is unfettered by cabinetry. Another unifying factor throughout the apartment are the “Lighting Carpets” that each contain three different types of lighting. Much as carpets on the floor define a space, these light fixtures do the same from an overhead vantage point. The fixtures include integrated LED lighting strips and units that cast light downward, allowing for total control over the amount and quality of light in a particular area.

The two parallel kitchen islands make it possible to access both sides, easing food preparation as well as entertaining. A second sink is installed across from the main sink and cooktop, increasing the area that can be used for preparation and serving. In addition, the island furthest from the living area and across from the refrigerator is the one housing the cooktop.

Further down the line is a work and library area. Set off from the rest of the space with a unique shelving divider, the office is  light and airy. The glass desk is modern but features a base made of natural wood branches, which helps inject more of the avant-garde feeling. The same lighting fixtures are seen here, but the library section includes cloud-like lanterns scattered across the ceiling for a dreamy effect.

Playing on the architecture of the space, the irregular cabinetry has quirky angles and uneven steps in the front, which keep the space original and fresh. The clash of angles fits the design, whereas traditional shelving would be clean and minimal, but rather boring. The large open window provides plenty of light for perusing books and highlights the natural brick ceiling.

The bedroom and bathroom in this stunning apartment are also an open plan design, closed off from public view by the only visible door in the entire space. This gives the owners privacy and makes it possible to heat and cool the two areas of the apartment separately, increasing comfort and cost savings. The main design elements, such as the lighting, ductwork and brick ceiling are repeated in the bedroom, even though it’s a separate space. It provides design continuity and extends the same vibe into the private area.

The bed is set into the floor so that the visual line is not elevated too far, which helps maintain the minimalist look while providing the comfort of a traditional bed. Being closer to the floor also eliminates the need for nightstands, which could clutter up the space.

The shower area of bathroom is separated by no single full wall. Toward the bedroom, the wall has an opening and a floating vanity separates the shower area from the rest of the space. The toilet area is private and is located behind the shower wall. The arrangement takes advantage of the one window in the shower, which lets in some natural light. Otherwise, the color palette is dark and wood-focused, including the flooring. Large, horizontal tiles give the shower a substantial look compared the appearance that smaller tiles would create.

A soaking tub is included in the main bedroom space. Situated by a window, sunlight floods in to help the plants grow and the bather bask in natural light. At night, the window offers a view of the sky.  The wood planking used in the shower is repeated here around the tub.