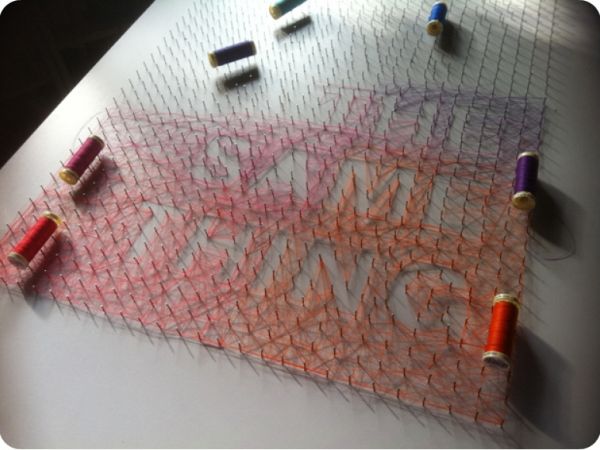 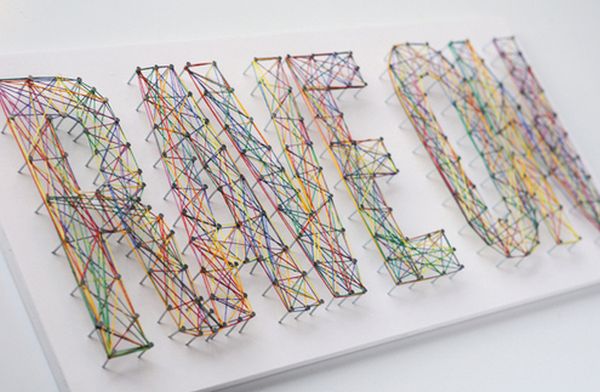 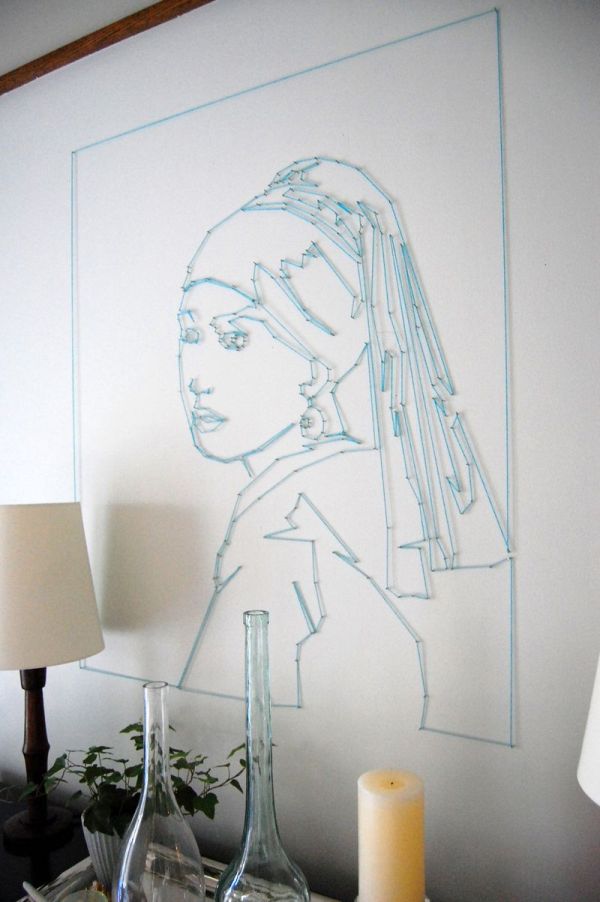 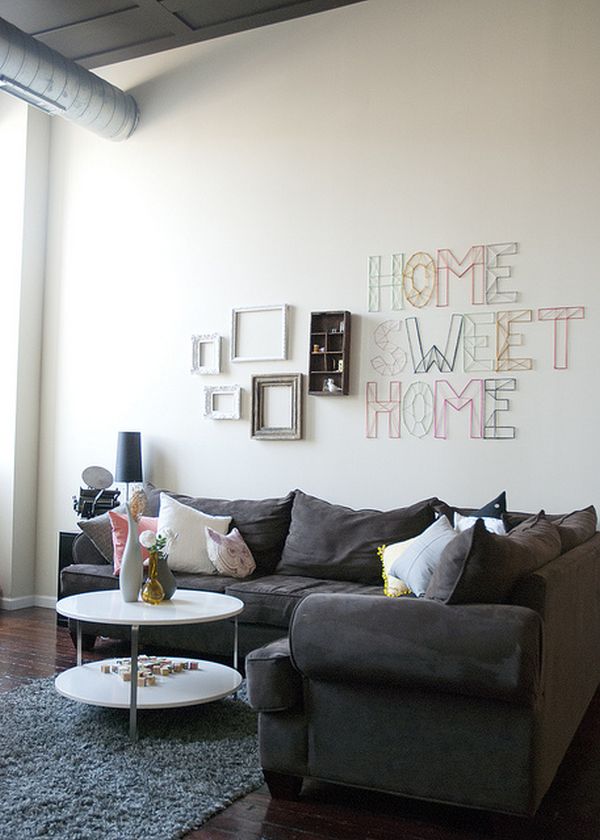 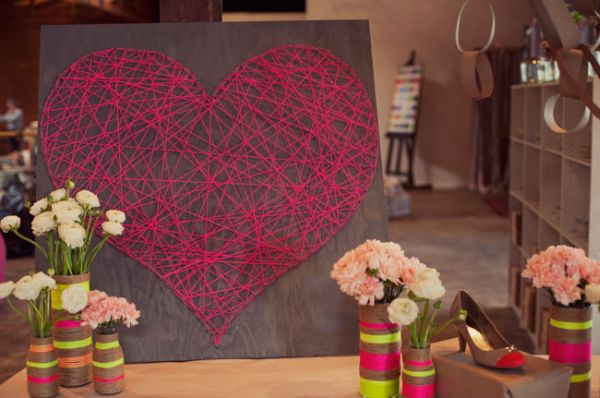 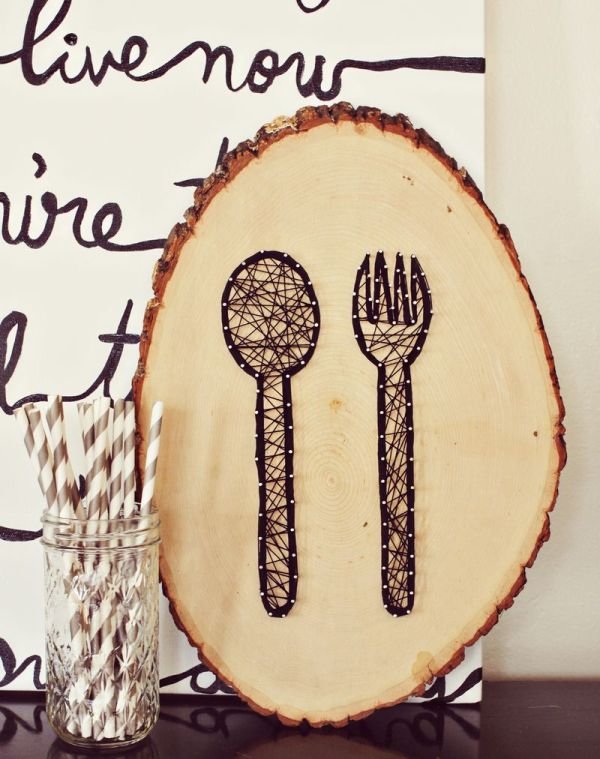 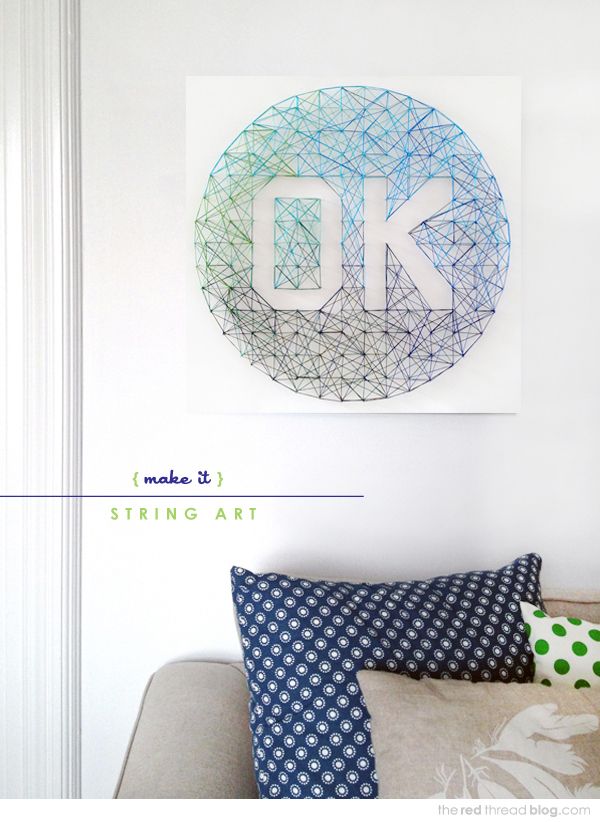 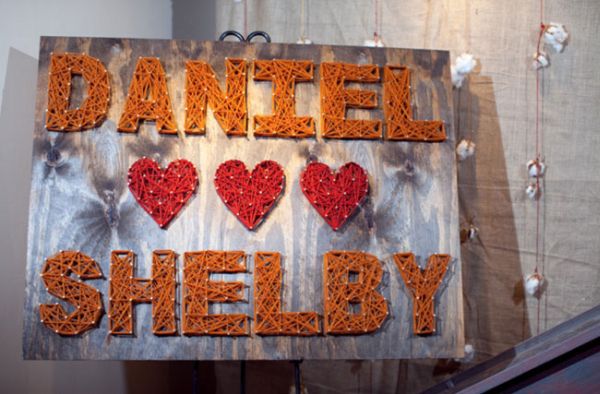 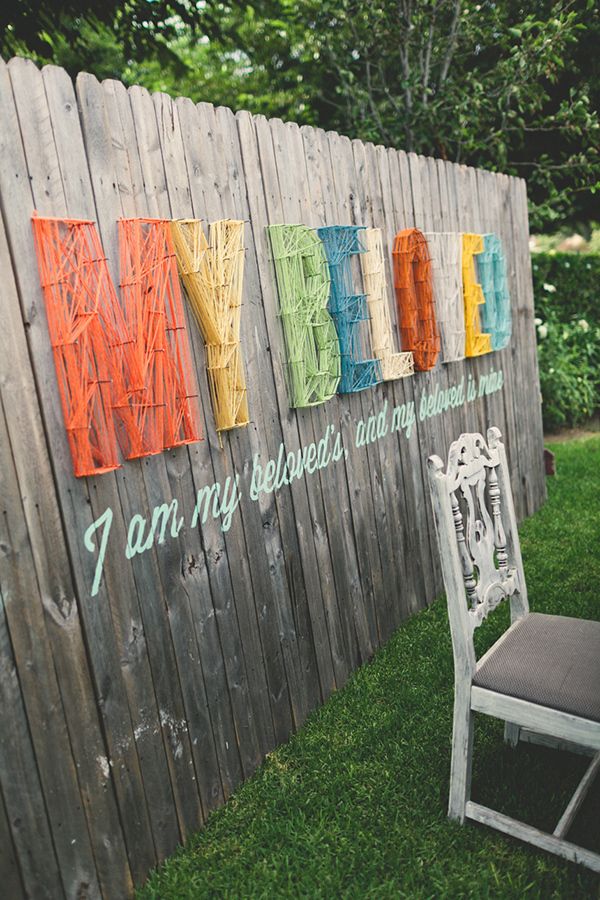 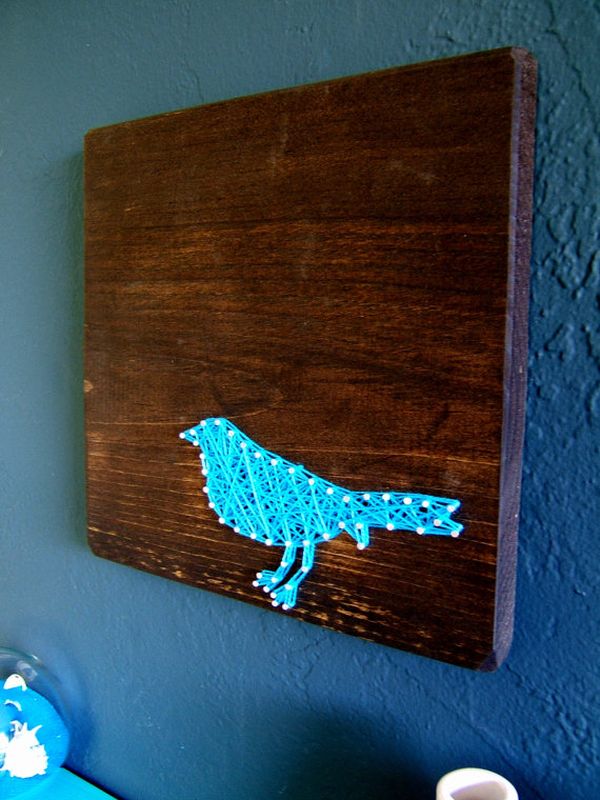 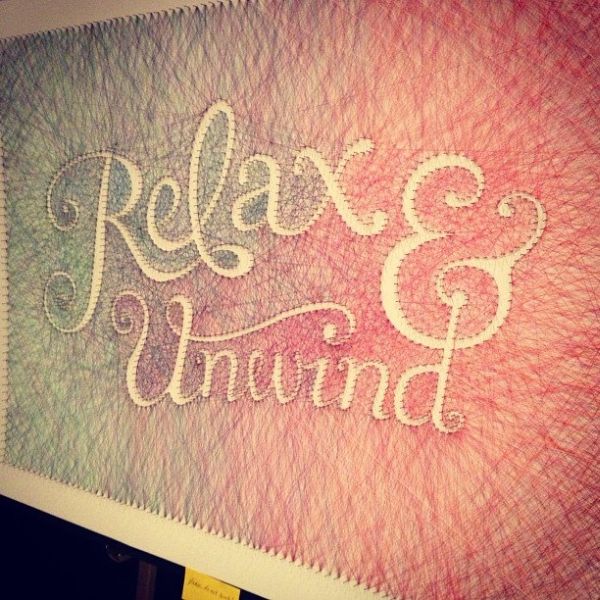 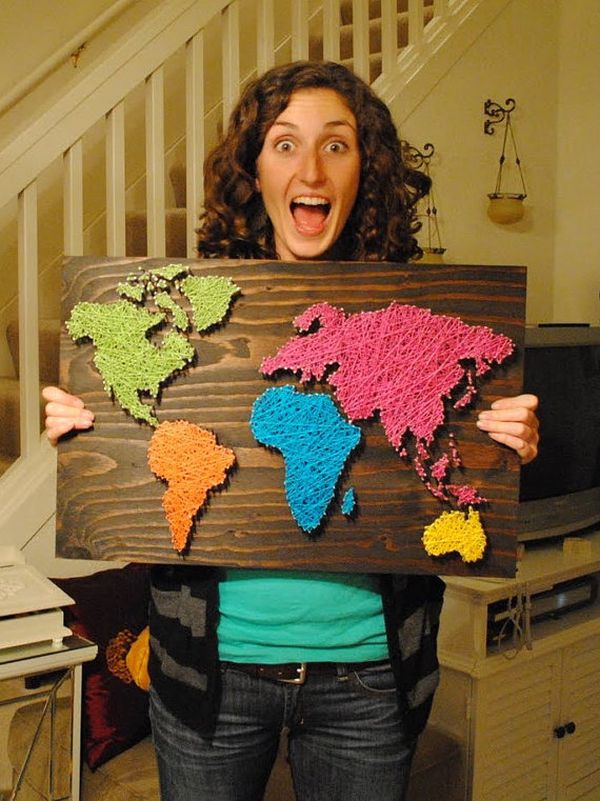 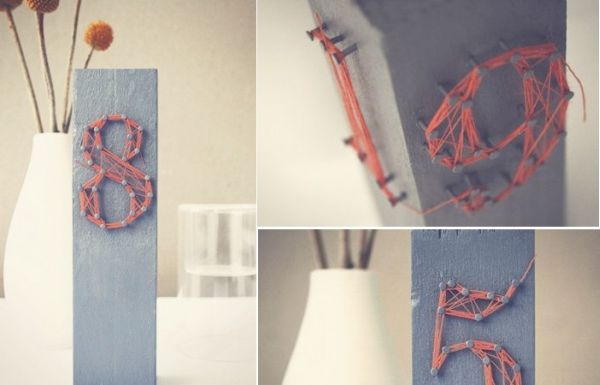 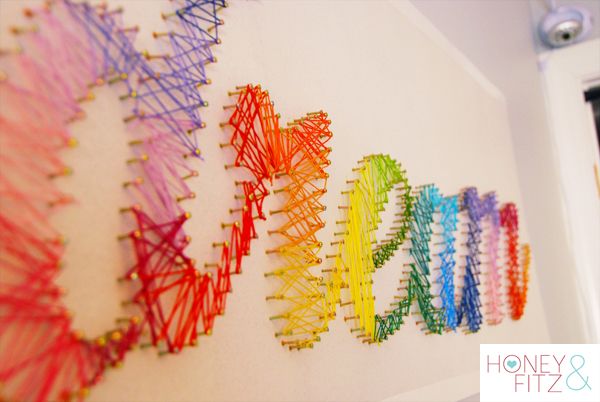 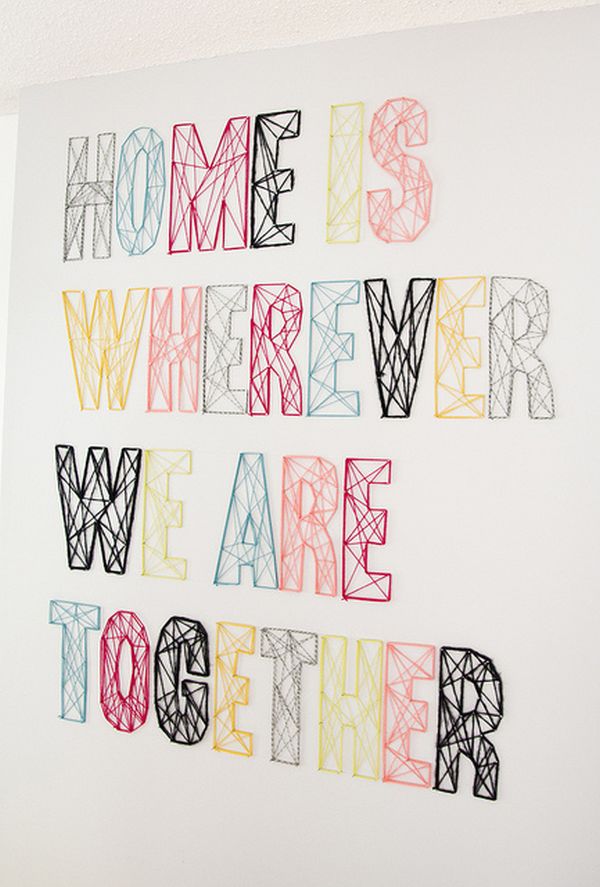 String art has become very popular lately and it now takes all sorts of forms. It ranges from simple designs like monograms to more complex creations like portraits and elaborate forms. The base on which the nails are attached can be almost anything. It could be a piece of wood, a wall, a fence, etc. Let’s take a look at some examples and maybe you’ll get inspired to create something similar.

Let’s start with a message board. First you need to write the letters on the board using a stencil. Then put tiny nails into the board, creating a pattern like the one in the pictures. After that, it’s time to start threading. Use several colors and interlock them to create rainbow effect.{found on mrkate}.

This is a similar project but with a different message. The wood was first painted white and then a pattern was created following the lines of the letters.The letters then became more visible with the help of colored thread.{found on manmadediy}.

This project is a little more difficult because, as you can see, the lines don’t interlock. Yarn is wrapped around each nail following the design. It takes a few hours to complete the process but it’s worth the effort.{found on blairpeter}.

What better way to express your admiration for your home than with a “home sweet home” message that covers the wall? Tracing each letter requires lots of patience and the measurements need to be exact if you want the final result to be pleasing.{found on jenloveskev}.

With a few nails, a board and some yarn you can create all sorts of beautiful designs. This one, for example, is a heart-shaped design made with pink yarn on a darker-colored background. It could be a nice idea for Valentine’s Day.{found on greenweddingshoes}.

Here’s a fun project for the kitchen. Take a spoon and a fork and trace their contours onto a slice of wood. Then use tiny nails and black string to make this lovely piece to hang on the wall or to display on a shelf.{found on abeautifulmess}.

String art is very versatile and very affordable because of the low cost of the supplies. With a wooden board, a few sheets of paper, some nails and some colored thread you can make something awesome for the wall in your living room.{found on theredthreadblog}.

String art can even be used for special events such as weddings. It can be something that the bride and groom want to display or something that you can give them as a gift. In either case, it’s an original idea which can be adapted to various occasions.

In case you’re looking for a way to make the fence in your garden look more attractive for a party of special event, string art can be the perfect answer. You can choose any message or design you want and all you need is some spare time.{found on weddingobsession}.

This beautiful thing was made from a wooden table. The top was detached and used as a board. Then a lovely bird shape was traced on the bottom portion and blue string was sued to bring it to life and to make it stand out more.{found on etsy}.

When creating string art there are two main possibilities: to use yarn on the actual letters or everyone around them. Either way, the message will be visible. In this case, an ombre design was created with the help of colored yarn.

This is one of the most amazing and elaborate string art creations we’ve found so far. It’s not that difficult to make actually. It’s a world map where each big portion of land has a different color.{found on etsy}.

We were talking earlier about events like wedding or parties and we found another nice string art project that could work there. These are table numbers made using the same process we’ve been describing so far.{found on shannoneileenblog}.

This lovely piece could be nicely displayed in the bedroom. It was created using yarn in multiple colors that interlock in areas for a smooth transition and a rainbow design was created at the end.{found on site}.

If you’re willing to sacrifice an entire wall for some amazing string art then you can make some wonderful designs such as cityscape or elaborate images. Use a single color if you want the image to stay in the background.

A common and beautiful string art design involves letters and messages meant to make the house seem more inviting and cozy. Each letter can have a different color and the message can be as big and bold as you want.{found on jenloveskev}.