In spite of what some of us may think, living in a warehouse can be very nice and rewarding. Try to distance yourself for a moment from the stereotypical image of a warehouse often depicted as a very cold and unfriendly space and think about all the possibilities. Warehouses are designed to be able to house lots of heavy goods and large machinery so they have strong and durable structures. They also have large spaces with high ceilings which you can either leave open or divide into smaller individual rooms. With a little bit of ingenuity and inspiration a warehouse home can turn out to be amazing and everything you ever wanted, like these awesome projects:

This is a building that used to be a caviar warehouse but serves now as a very chic and modern home. The transformation was done by architect Andrew Franz who managed to retain some of the original charm of the building while also infusing it with a lot of new and modern features. Some of the most notable additions include a retractable glass roof, a custom steel staircase and of course that amazing interior courtyard that gives the space a lot of energy and character.

Looking at the structure now you wouldn’t really suspect that it was built in 1884. Both the interior and the exterior were redesigned. This unusual home has eclectic decor which combined old and new and puts together various different textures, finishes and materials which highlight the space’s original character but also all the new features such as the sunken interior court, the modern kitchen and dining area or the glamorous and welcoming bedrooms.

A warehouse converted into a family home

Although converting a warehouse into a home can be very rewarding and advantageous, there are also challenges that the architects have to overcome. Each transformation is unique in this sense. The project completed by Corben Architects for example revealed plenty of challenges including the location itself which is in a flood zone and under a flight path. There were also heritage -related restrictions that had to be respected and which dictated that the existing roof trusses and the street facade had to be preserved.
Even with all these restrictions and inconveniences, the project turned out wonderful. The new design of this amazing warehouse home is centered around a courtyard which has the role of bringing sunlight and air into the living areas as well as into the bedrooms. A remarkable detail is the kitchen island which is 9 meters long and made of concrete and looks as if it’s emerging out of the floor, folding and floating in a surreal manner.

It’s up to each architect and each client to decide how much of the original warehouse they want to preserve and to include into the new design. When they transformed this warehouse from Melbourne, Australia into a cozy family home, Zen Architects preserved and re-used as much of the existing building as they could. Elements such as the cladding, the roof sheeting, the doors and various other original features have been preserved.

Of course, a variety of new features and elements have been added too. One of them is the new raised deck which is a connector between the interior living spaces and the courtyard. The wooden deck is a very beautiful and welcoming feature. It has an open ceiling and lots of greenery. Sliding glass doors let this light and freshness enter the interior spaces too. The new distribution of the spaces and the addition of a mezzanine floor have greatly transformed the warehouse, making it feel like a true home.  On top of all this beauty, the warehouse home is also energy-efficient and that makes it even more impressive.

Not all warehouse homes have exposed brick walls and a strong industrial vibe. One example is a project completed by LSA Architects in Melbourne, Australia. They managed to transform an old warehouse into a contemporary and very airy and chic look. The most amazing thing about it is the top floor which is almost completely encased in glass. You don’t see that every day….not when it comes to warehouses at least.

The interior design of this exquisite warehouse home is modern, simple, refined and limited to only a few color tones. The timeless black and white duo is used in combination with warm tones of wood, gold accents and hints of green which are beautifully distributed throughout the spaces.  The living area is a particularly charming space. It’s very large, open and full of light and it has this black wall of cabinetry complemented by a white kitchen island and a white dining table set while the light wooden flooring gives a very warm and welcoming vibe.

Warehouse home with a cloud-shaped pod at its center

When converting a structure into something other than was it was originally intended to be you have to make adjustments and in the case of a warehouse turned home that usually means finding a way to divide the huge open space into smaller zones, each serving a different function. Sometimes architects create mezzanine floors or loft bedrooms but sometimes they have completely original solutions.

This two-level warehouse from Sydney is a special case. It was transformed into a private residence by Allen Jack+Cottier and the studio found a very ingenious and original way of organizing the floor plan. They created a large white pod with a very unusual and sculptural form. The pod is reminiscent of a cloud and inside it houses the master bedroom suite. The pod’s interior is like a cave and a rather alien-like vibe. It helps to create a new space without making the home feel less open and airy.

The white sleeping pod is made of glass-reinforced foam and is finished in white resin, inside and out. An LED mirror skirt illuminates the bottom of the pod, making it appear to float at night. Inside there’s a bed seamlessly integrated into a platform shell, as if it’s a natural extension of the pod’s walls.

An artist’s workshop in Greece

Technically this isn’t a warehouse conversion since there was no warehouse to begin with. However, the Art Warehouse designed by A31 Architecture has a few similarities with everything else we’ve presented so far in the sense that it has a warehouse-like structure, it’s tall, large and open. It has a shell made of reinforced concrete and a timeless and simple design. It’s means to function as an artist’s workshop and home.

You can find this structure in Boeotia, Greece, in an area with scarce but beautiful vegetation. The interior of the workshop is organized into three distinct zones. One of them is situated to the south and contains the entrance, another is the main area which serves as a workspace and the third zone is the attic situated to the north which functions as a storage area. The entrance facade is fully glazed while the rest of the walls only have small horizontal openings.

As soon as architect James Davies saw this warehouse he recognized its great potential and decided to make it his new home, in spite of the building’s poor state at that time. Look at it now. It’s an amazing home with a double-height living area, two cozy bedrooms and a lot of charm. The main selling points were the building’s robust frame and the ceiling height. The structure used to be a schoolhouse and has limited access to the street which prevents large vehicles from being able to reach it. This was an inconvenient but the architect had a solution that solved everything.

Almost everything new that was added to the building was prefabricated off site and divided into small pieces. Of course some of the original elements were preserved too. The exterior brick walls were kept intact, keeping alive a piece of history. The interior was almost entirely redesigned. It’s now bright, welcoming and very stylish, featuring a clean and modern aesthetic.

Warehouse apartment with a movie archive

Every home should suit its owners and should reflect their personal interests as best as possible. Architecture firm APA did a great job in this sense when they transformed a warehouse into a majestic apartment for two theater and film directors. The new warehouse home includes a very special feature: a raw steel volume like a huge box inside the main space. In this volume there’s a movie and book archive, a bathroom and laundry area.

In this care the roughness and industrial character of the original warehouse appealed to the new owners who wanted to preserve as much of it as possible. They also wanted their home to be modern and to suit their lifestyles, hence the steel box volume, the huge windows and the simple and neutral palette of colors, materials and finishes. The role of the steel volume is not just to house the movie archive but also to help organize the rest of the spaces. Each side of the cube faces a different area: a space for reading, one for sleeping, one for working plus the kitchen, dining area and living space.

Warehouse turned into a photographer’s studio

Usually warehouses are big open spaces which have to be divided into smaller individual rooms when the building is converted into a residence. However, that wasn’t the case for this London warehouse. When Sadie Snelson Architects worked on turning it into a cozy home with an industrial design they first has to remove all the dividing walls. The initial floor plan featured multiple small and dark spaces which didn’t really comply with what the new owner had in mind for this new home.

The warehouse became a studio and a home for its new owner who isa photographer. It has a mezzanine level, large and open spaces with high ceilings and a very fresh and dynamic interior structure. A folded steel staircase connects the floors and the array of materials used throughout ensure a very pleasant ambiance balanced between exposed beams, metal surfaces and oiled oak flooring. The materials chosen are meant to reflect the industrial nature of the space but also to make it feel welcoming. 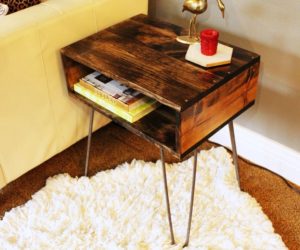