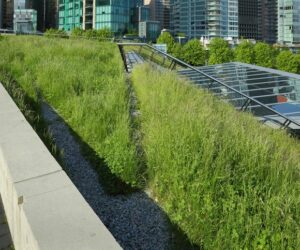 Bridges and houses don’t necessarily have much in common or so we thought until we came across these awesome builds. These bridge houses stand out in more ways than one and we’re really excited to find out what else gives them character apart from the obvious design choices. Each tells a different story through a unique design inspired by the wonderful landscape that surrounds it. Let’s have a closer look.

This Bridge House is a project completed by Mackay-Lyons Sweetapple Architects in 2009. It’s located in Canada and it extends over two bedrock outcrops, forming a bridge and framing the area underneath. Because of how unusual the layout and overall structure are, the architects created two entrances, one at either end. It’s a really cool way of preserving the landscape and making the most of difficult topography.

Another really cool Bridge House was built by studio LLAMA urban design in 2016. It’s located on the shores of the Mary Lake north of Toronto and it sits right over a ravine. Choosing to build the house across the steepest part of the slope and over the ravine definitely made the project more difficult for the architects but at the same provided a set of unique opportunities. It’s all about celebrating nature’s wild and rugged beauty.

This Bridge House is situated in Kent, Connecticut and was designed by Joeb Moore + Partners Architects. It’s close to Kent Falls State Park, an area filled with beautiful waterfalls and a historic bridge that actually serves as a source of inspiration for the architects. The strategy was to create a structure that interacts with the natural landscape in a seamless way. On that note, the house is anchored into the hillside and bridges across the site. This gives it the best views and allows it to frame the wonderful scenery.

The Bridge House that Aranguiz-Bunster Arquitectos built in Chile takes inspiration from the topography of the site which is crossed longitudinally by a stream. In turn, the house crosses the stream much like a bridge would. This allows it to occupy a really cool part of the site with stunning views. At the same time, this design also has minimal impact on the land which is always a desirable outcome. Without altering the course of the stream or damaging the forest, the architects managed to build a really great structure.

On a similar note, TAO – Trace Architecture Office built a really cool Bridge House in Weihai, China. It’s an addition to Swan Lake Park which is a natural wetland near the Yellow Sea. Its role is to provide tourists and visitors with a good place to admire the surrounding landscape from as well as with a few other facilities. It’s 71 meters long and it spread across the water and manages to have minimal impact on the landscape, allowing it to remain uninterrupted and making the most of its context.

This is a variation of the bridge-style house we’ve been talking about, built on a sloped piece of land in Romania. Instead of trying to flatten the land or build the house into the slope, the team at TECON Architects chose to raise part of the structure off the ground. This resulted into a very interesting design, with a volume that bridges over the gap and allows the courtyard to expand below, thus maximizing the outdoor spaces on the property.

The design strategy for this house is a bit different from the ones we’ve seen so far. In this case there are two separate main volumes facing each other with a courtyard in between on the ground level and a bridge above. The bridge connects the two volumes and allows passage from one side to another on the upper floor while also adding a few other functional advantages. This design was created by Atelier Pierre Thibault and this wonderful lakeside residence is located in Quebec, Canada.

Another interesting project is a house designed by Schmidt Arquitectos Asociados. It’s located in Chile and sits on a piece of land that gently slopes downwards. The site is traversed by an irrigation canal and is also covered in eucalyptus trees. As you can see, these are rather difficult conditions which is why the architects turned the house into a bridge. This allows it to occupy a particular piece of land which would otherwise be unfit for building on. It also means that the views from inside are very interesting.

The last bridge house on today’s list is situated in Bancock Park, in Lost Angeles. As the images show, it stretches over a stream and it looks amazing while doing it. This design allows the natural landscape to be preserved and also gives the house a ton of character and a nice view especially from outside. This was a project by studio Dan Brunn Architecture (or DBA for short) which showcases the architect’s signature style which is defined by minimalism.