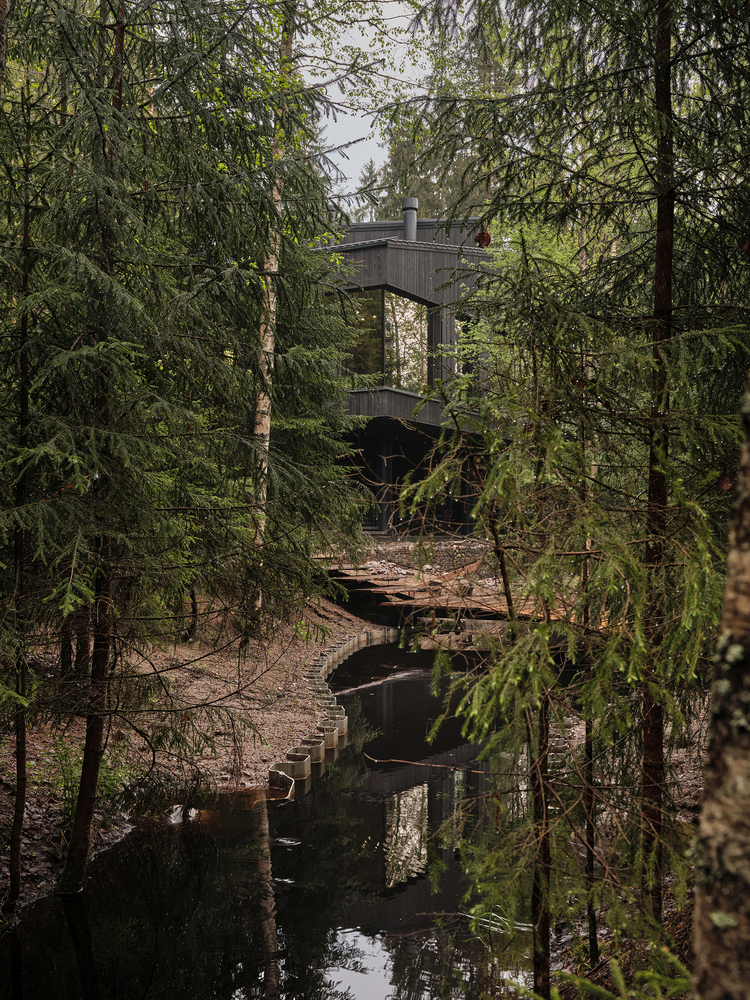 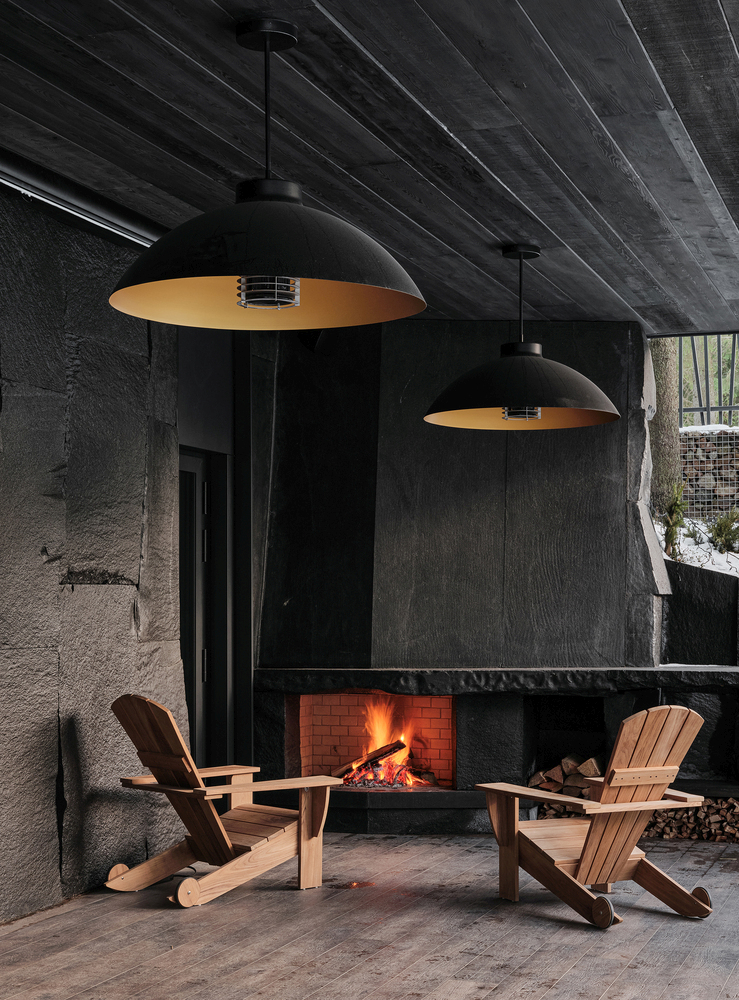 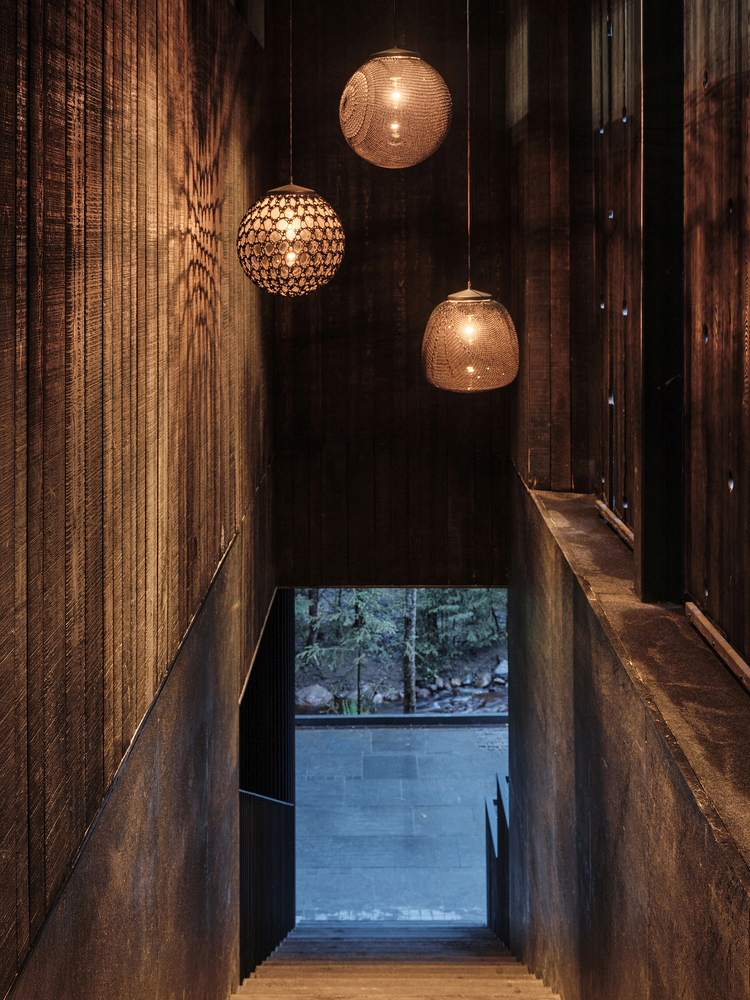 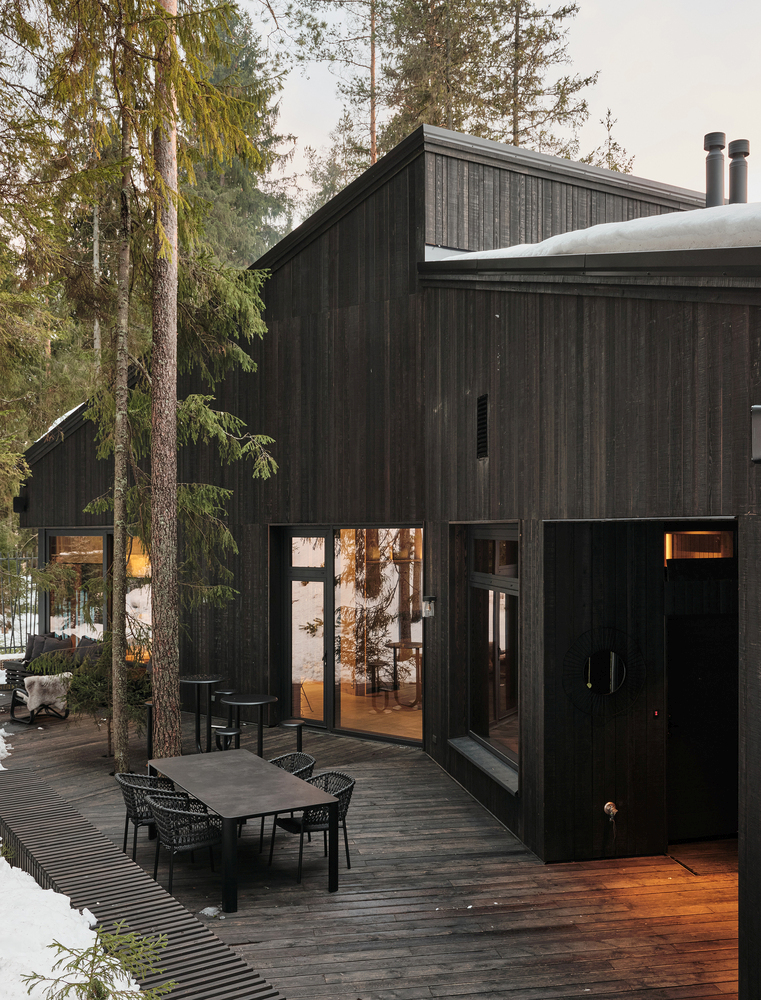 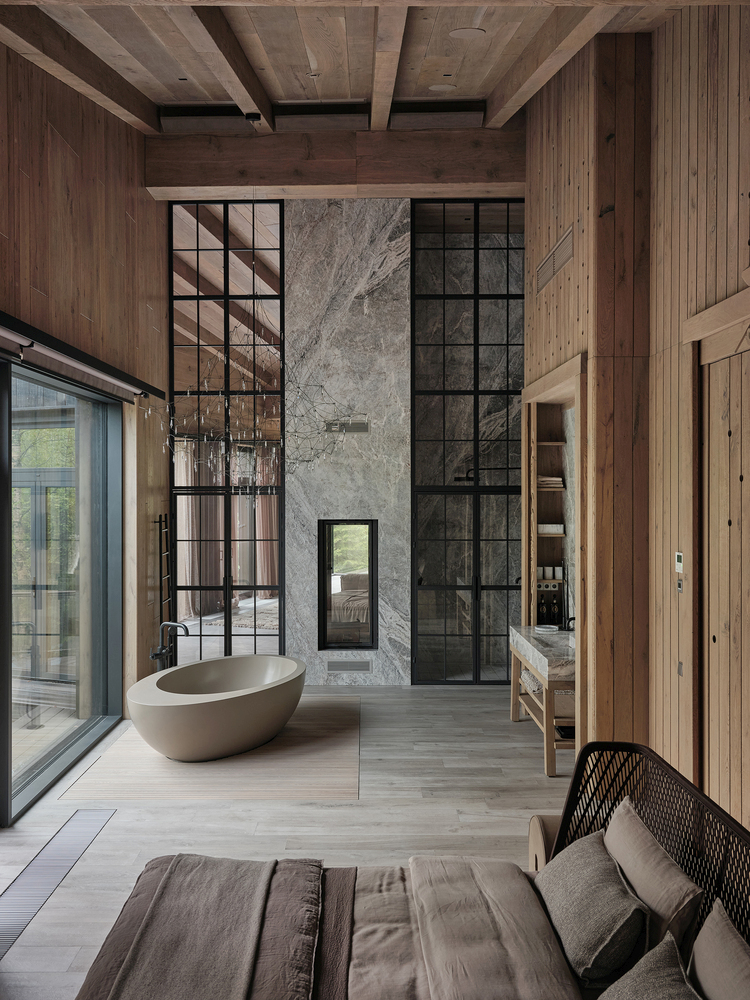 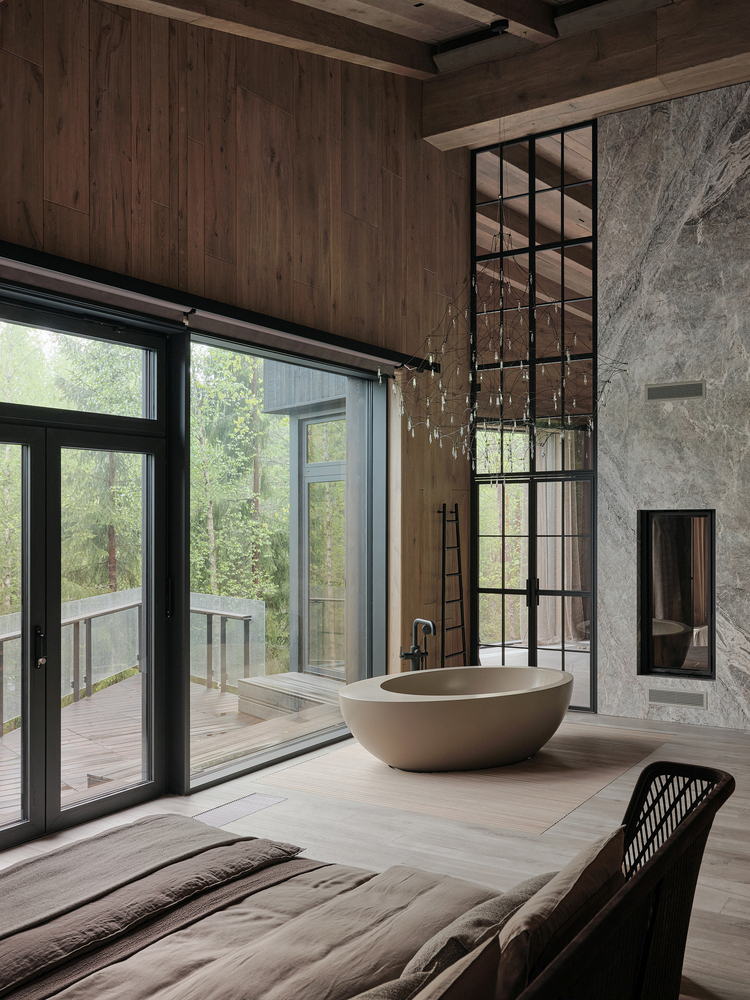 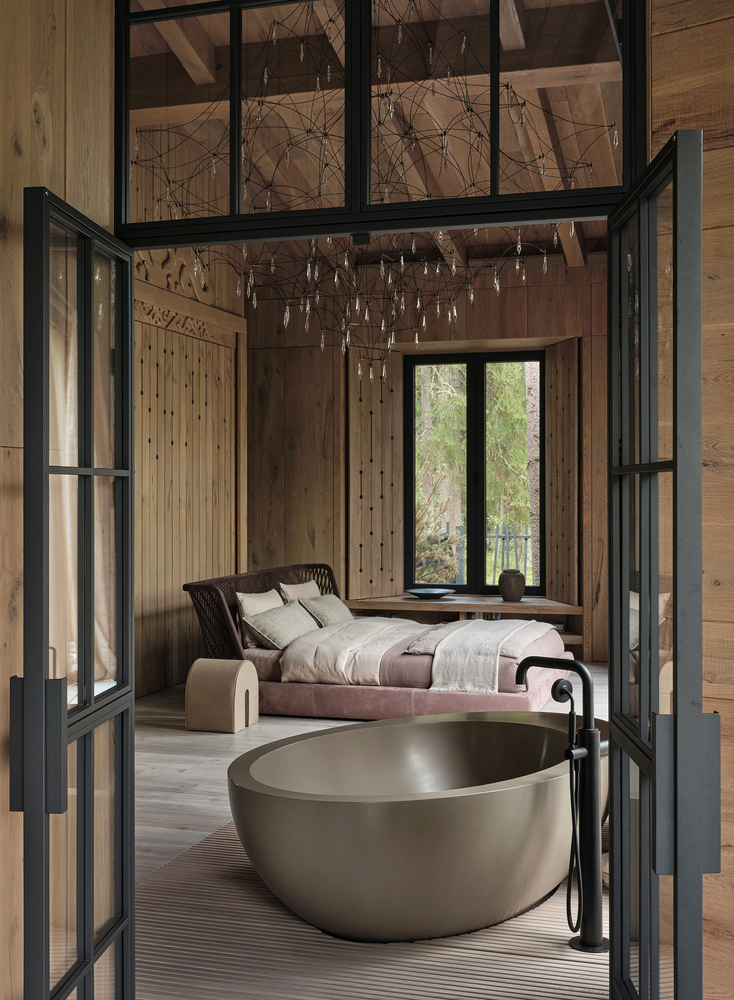 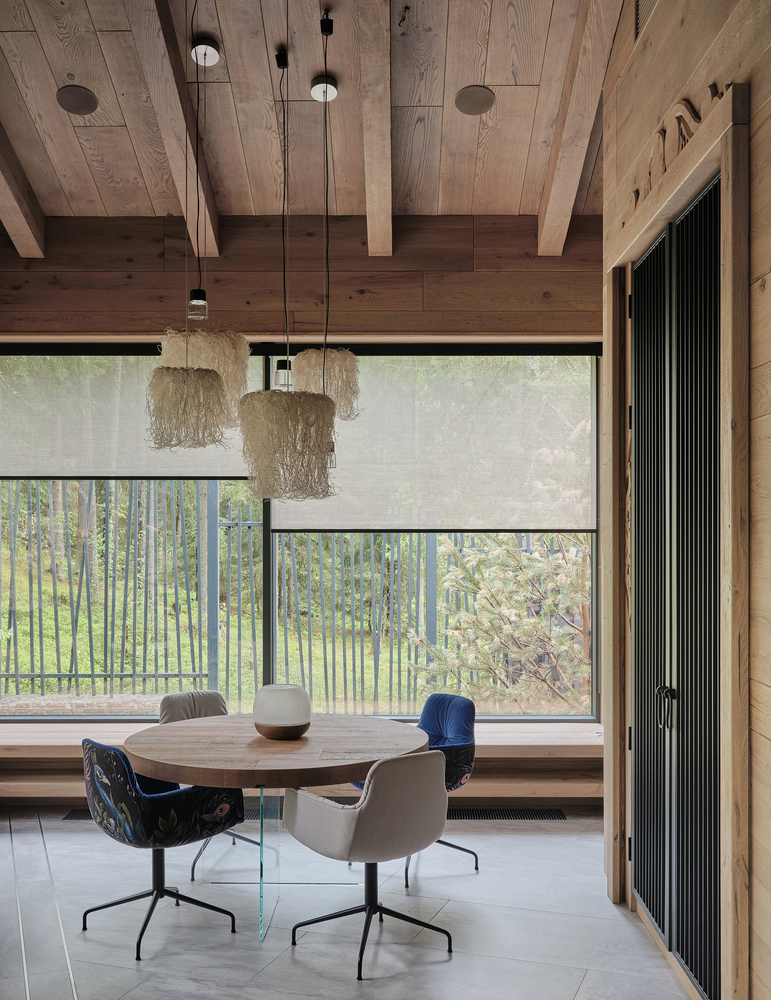 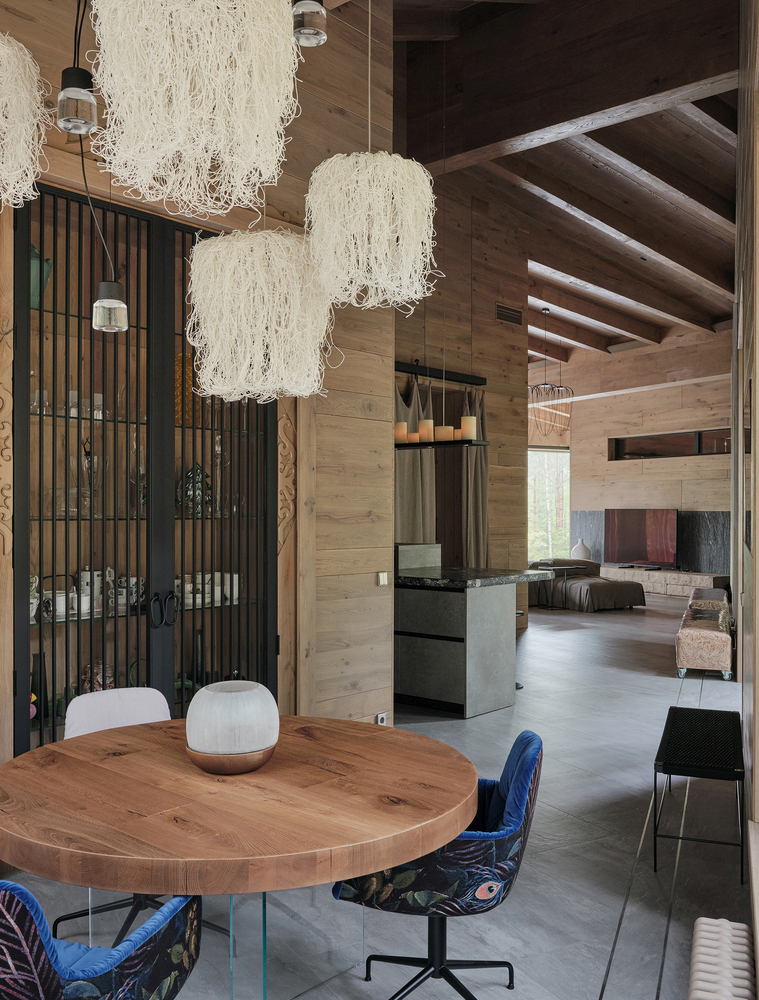 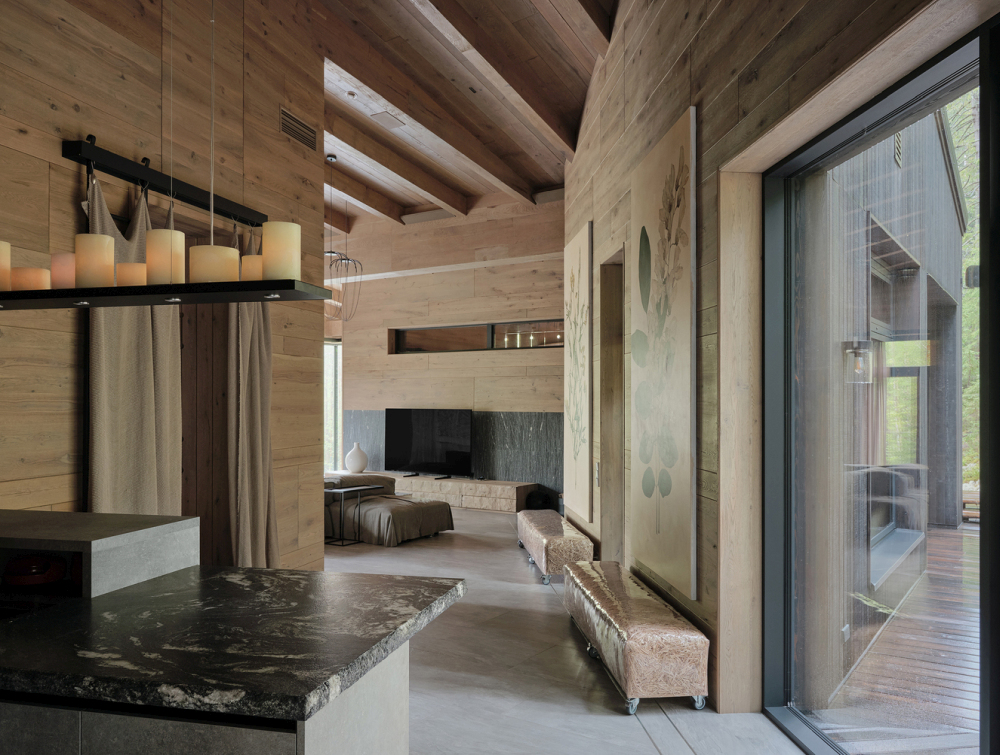 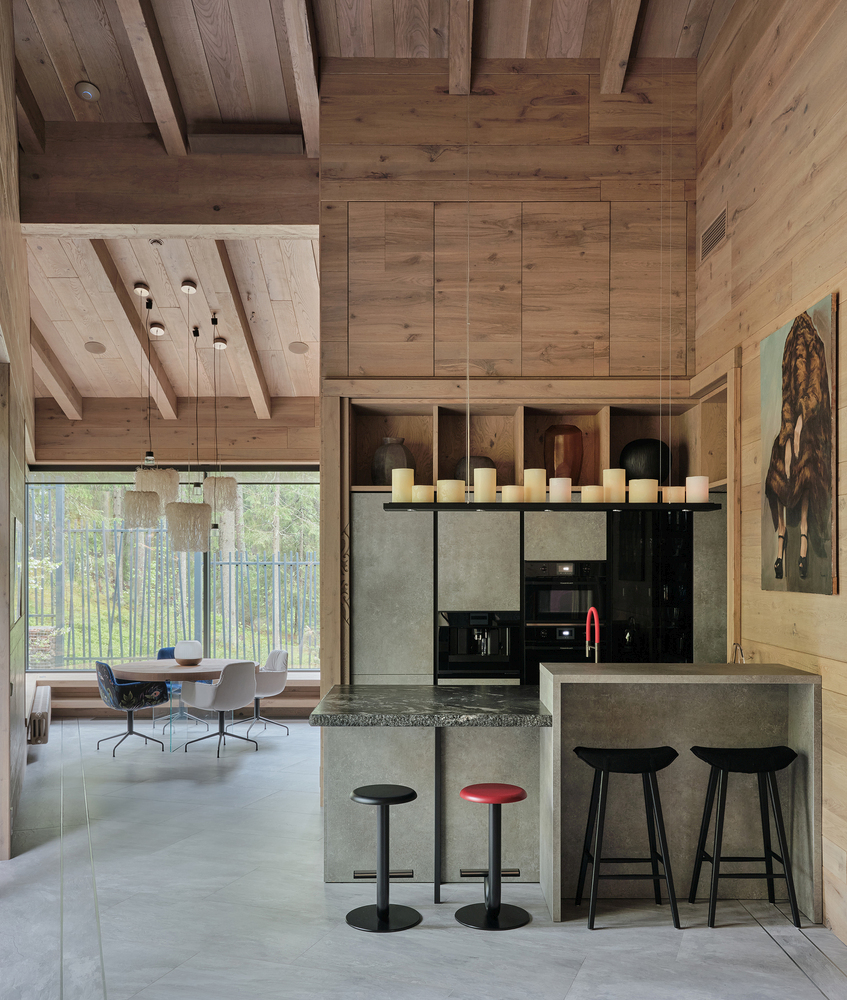 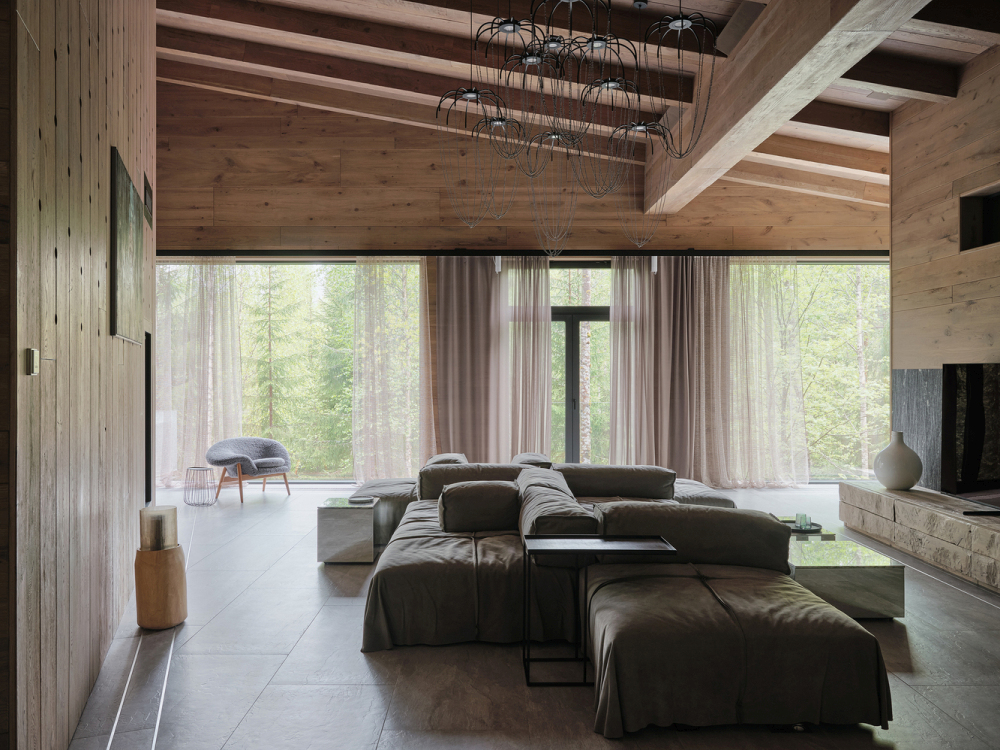 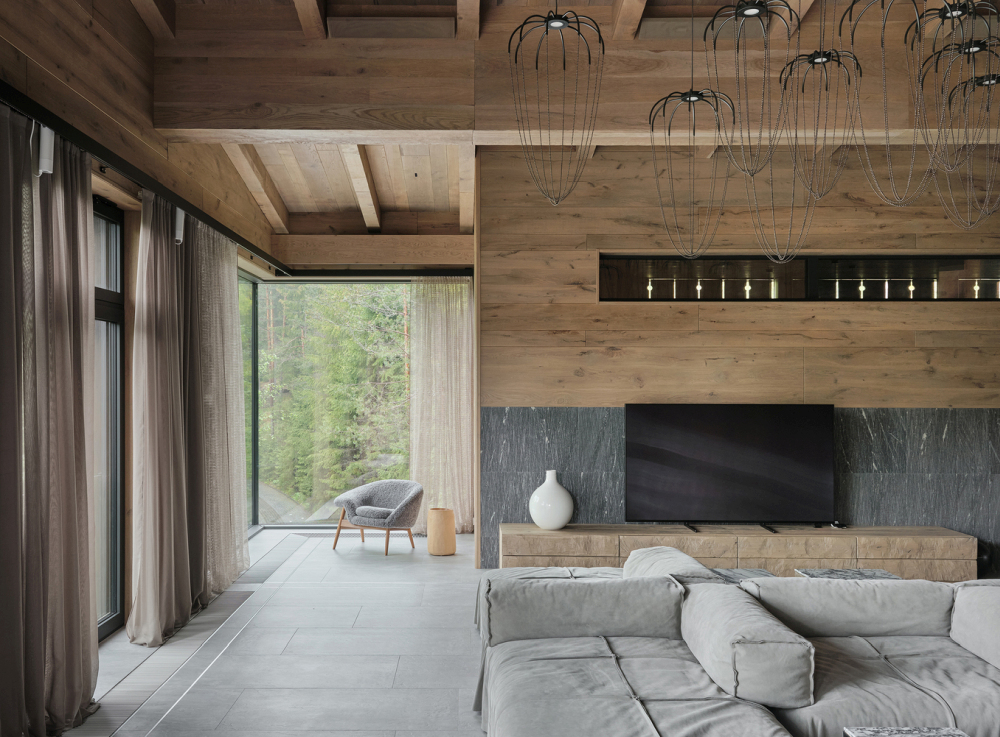 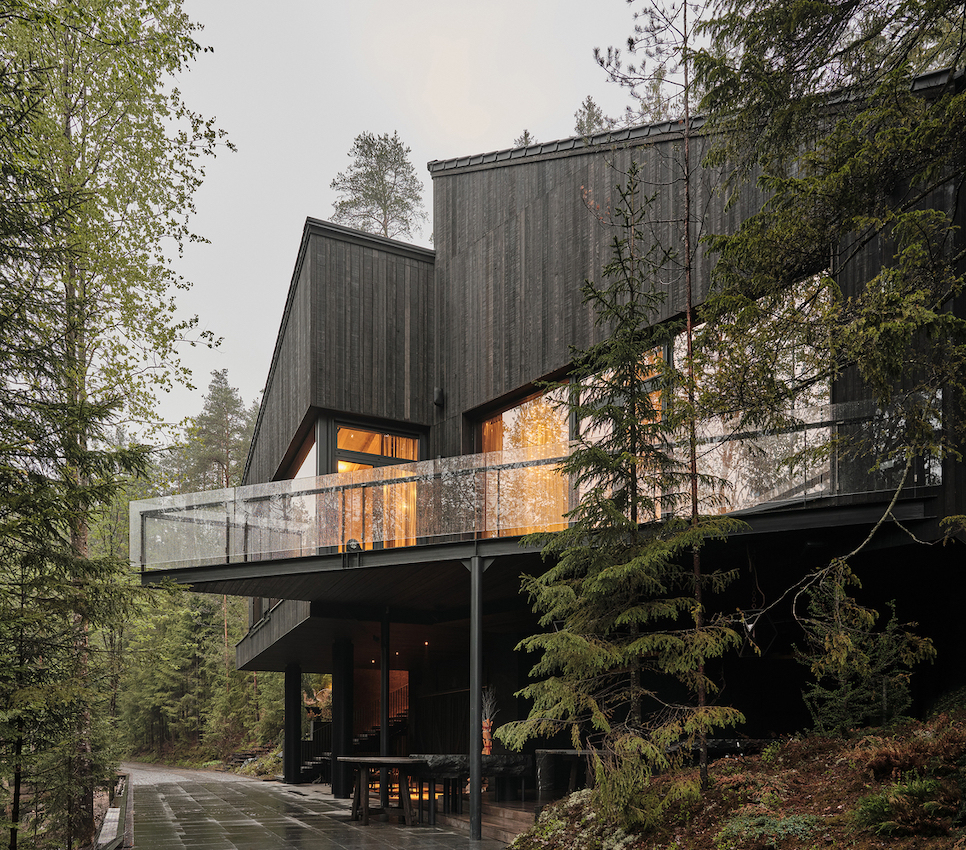 Tucked away in a Russian forest, Hill House has a design that was inspired by the dark and dramatic topography that surrounds it. The architecture is built into the hill, becoming an integral part of the landscape and featuring its own peaks and points.

Designed by Horomystudio, the 284-square-meter house follows the slope of the hill, with the bottom level becoming an extension of the mountainside. To blend it with the forest, the architects chose to use local natural materials, in particular the unique black stone that covers the exterior. It comes from the Karelia region and is a gabbro-diabase, a  subvolcanic rock equivalent to volcanic basalt that is often used in. building and a variety of other uses. It not only provides the modern edge the architects were looking for but also reflects the cultural history of the region.

Related: 25 Black Modern House Ideas That’ll Make You Want to Come to the Dark Side

The facade is also defined by the large windows that are found on all sides. In order to add a little rustic style to the modern silhouette, delicate sliding shutters were incorporated. They are mounted on barn door-style tracks and feature traditional Russian saw-cut carving for embellishment.

The lower level of the home holds the utility areas as well as the garage and storage room. As you ascend upward to the second floor, you enter a light-filled living space that is completely focused on the views of the forest and river that runs through it. Throughout the living spaces, natural oak is used for the walls and high ceiling, lending warmth, texture and lightness to the interior. Modern pendant lighting evokes a forest canopy and echoes the light feeling of the overall ambiance.

To keep sightlines clear throughout the open space, a low-profile, multi-directional sofa is placed at the center of the living area. Not only is this ideal for entertaining, but it allows residents to face the views in all directions or the fireplace when they want to enjoy a roaring fire.

The compact kitchen is mostly hidden from view of the main living space but remains connected and still has plenty of natural sunlight. The two-height countertop provides plenty of workspace as well as bar stools at different heights, perfect for accommodating adults as well as children. The overhead light features a multitude of candles instead of bulbs, adding a rustic touch to the modern kitchen.

The dining space is casual and features one of the few pops of color in the otherwise neutral, natural palette used in the home. The modern pedestal dining chairs are upholstered in a plush cobalt velvet and a dark and dramatic velvet print on the back. Fluffy natural pendants hang above the table like little clouds. A sturdy, family-friendly tabletop sits on a glass base, which gives it the illusion of floating.

Outside, the privacy fence was designed to mimic the tree trunks in the forest beyond. This way it is an artful addition that provides security, rather than an eyesore that detracts from the beautiful forest views.

The master bedroom suite includes a number of dramatic features that make it very special. Situated in the center of the room, the bed is a focal point, but so is the large stone soaking tub in front of the windows. Overhead, a massive yet minimalist chandelier hangs from the ceiling with a multitude of lights that feel like a canopy of stars over the bathtub.

Throughout the bedroom, the same perforation detail of the exterior window shutters is featured on the wooden walls and by the bay window. Floor-to-ceiling windows with doors leading to the other parts of the home allow the space to feel more open and light-filled. The bedroom also included a vanity with a basin, rather than confining it to a closed-off bathroom.

No matter the season, it’s possible to enjoy the view from an outdoor vantage point on the deck, with includes seating for relaxation as well as dining or playing games.

A rustic stairwell leads to the driveway and the exterior part of the lower level. A variety of glass pendants shed interesting light patterns across the walls.

At the bottom, an outdoor fireplace paired with Adirondack-style chairs makes a great place to enjoy winter afternoons or cool evenings. The space can be even cozier thanks to the overhead heaters with radiant shades.

As if the forest views were not enough, there is also a creek that runs through the property and can be accessed via a rustic walkway and bridge.

The dramatic and slightly severe facade of this home is a stark contrast to the light interior that is superbly luxurious in a very casual way. These features combine to make a spectacular home that fuses with the forest and creates the ultimate comfortable getaway for any season.