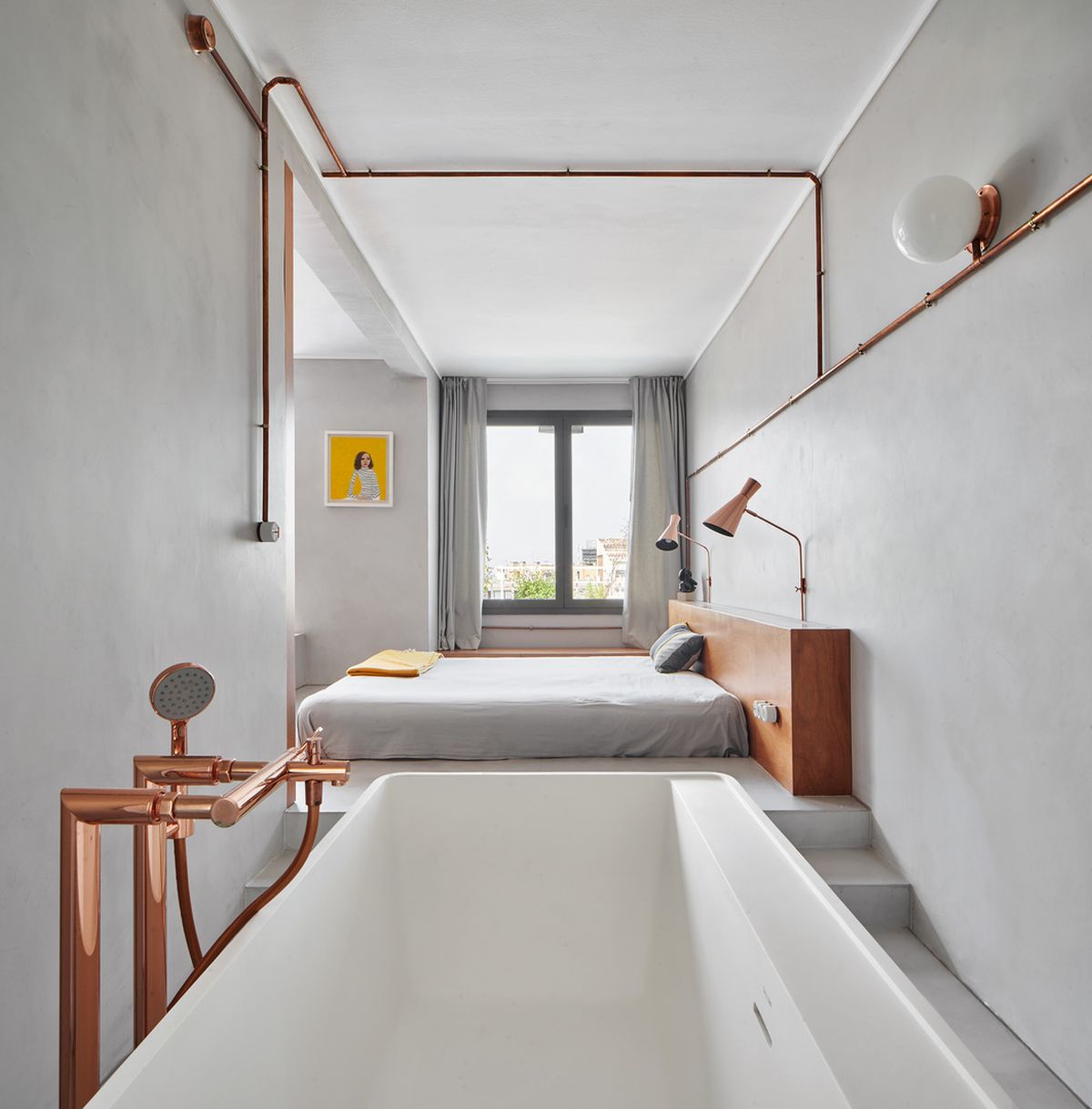 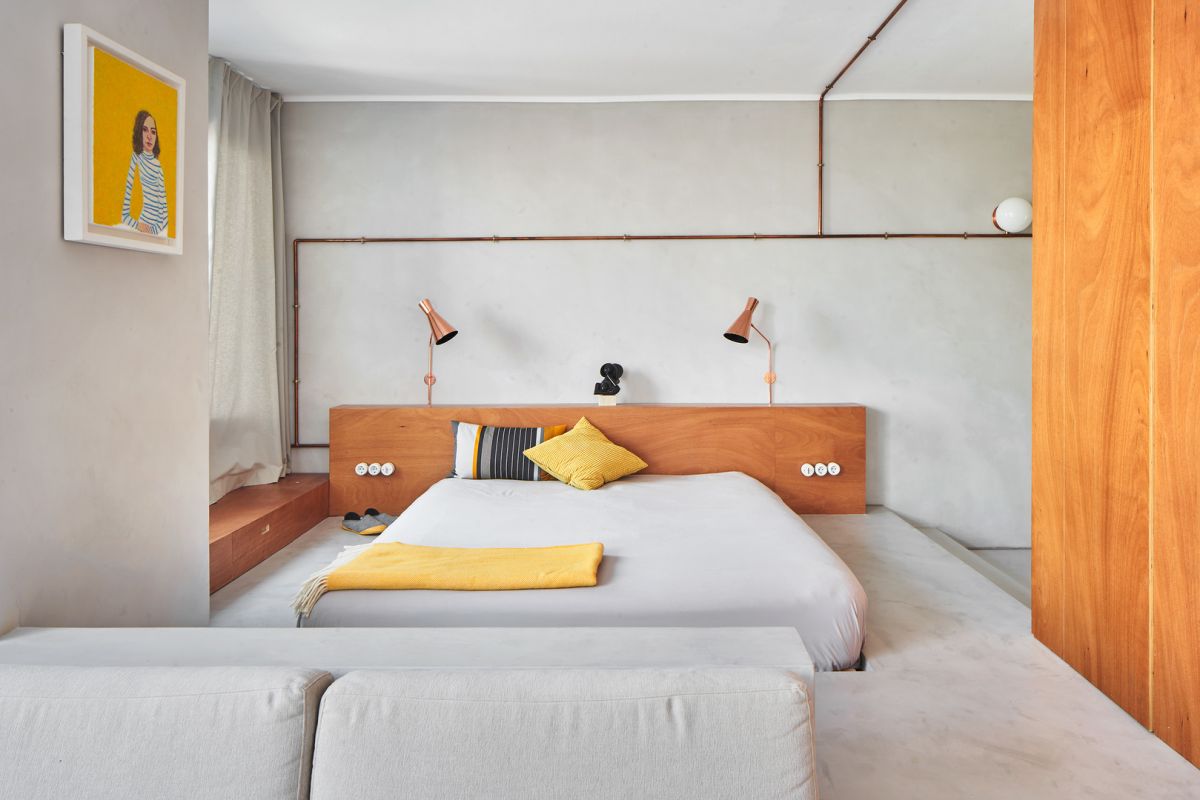 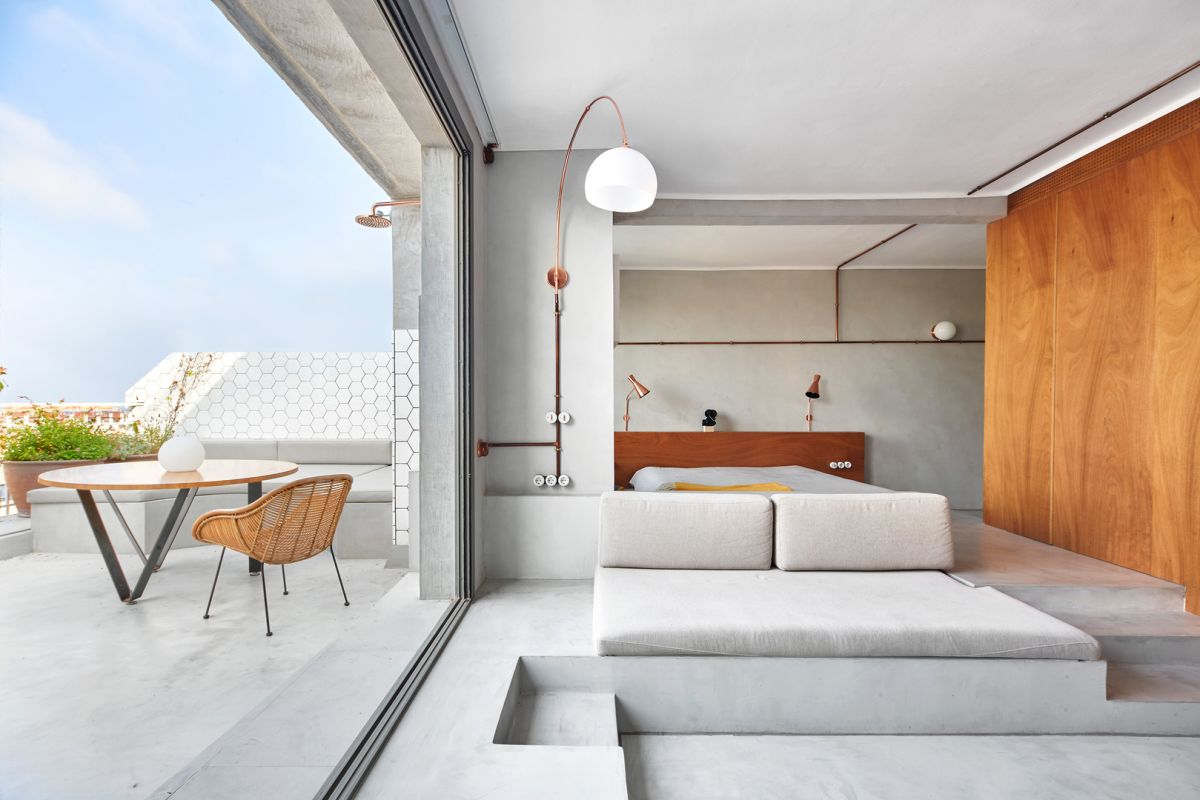 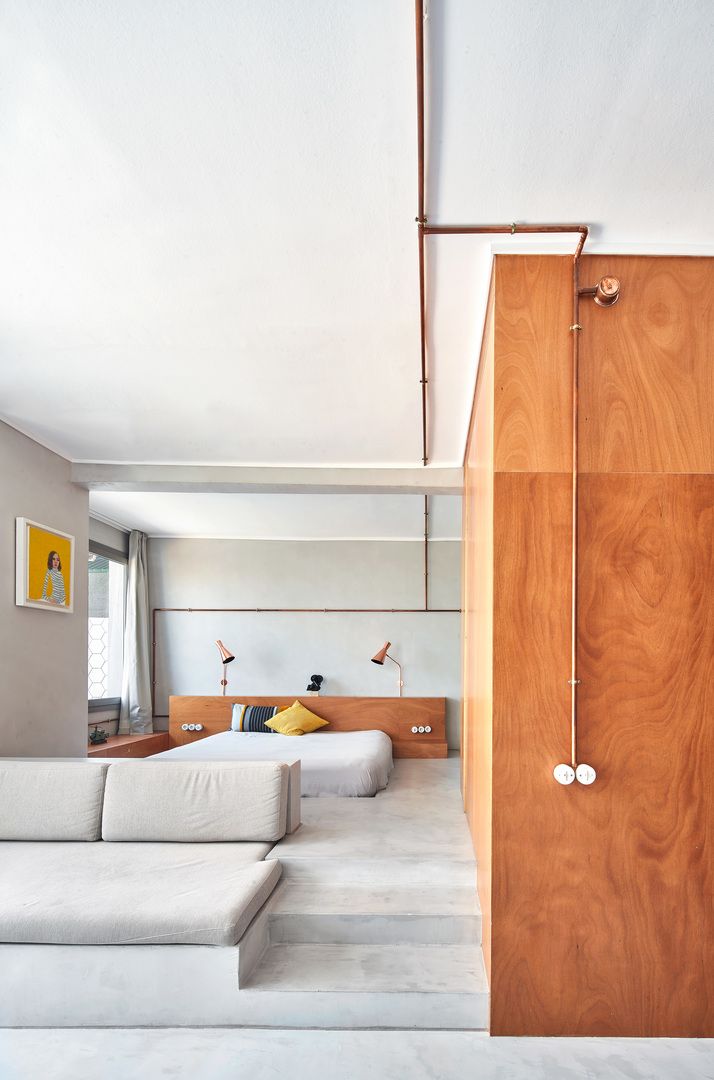 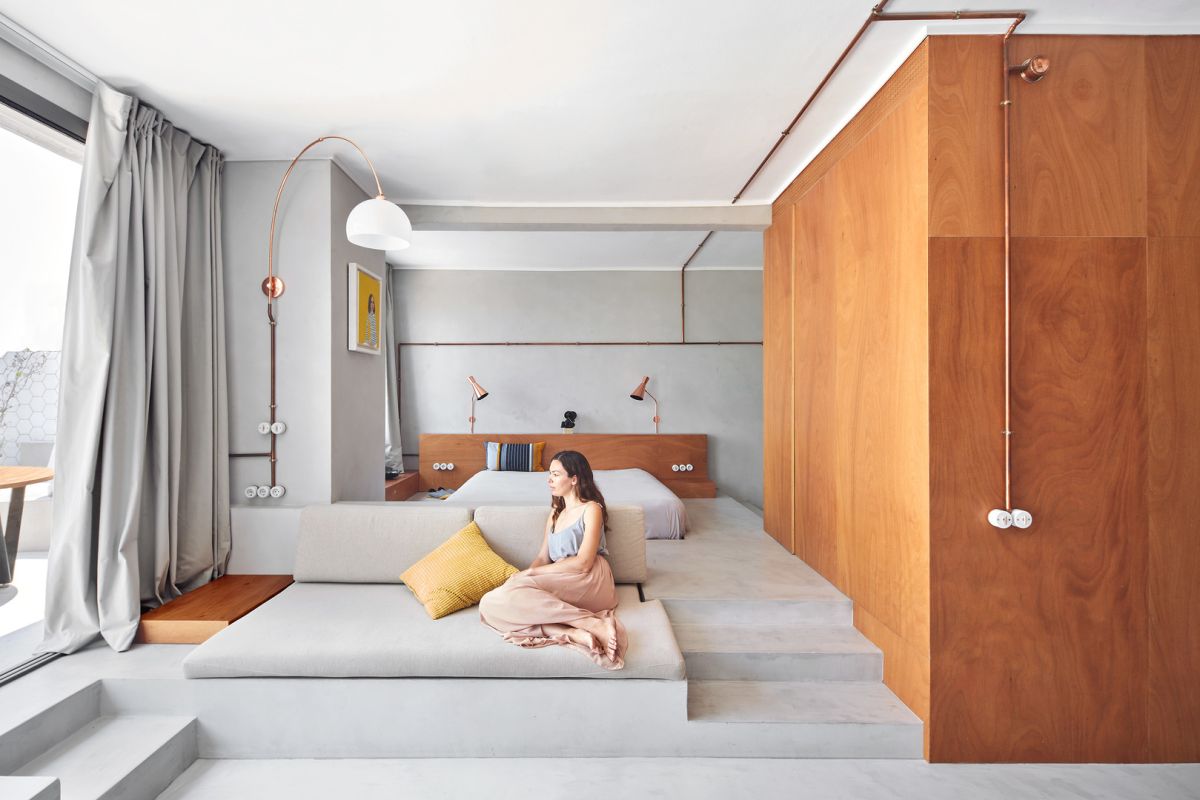 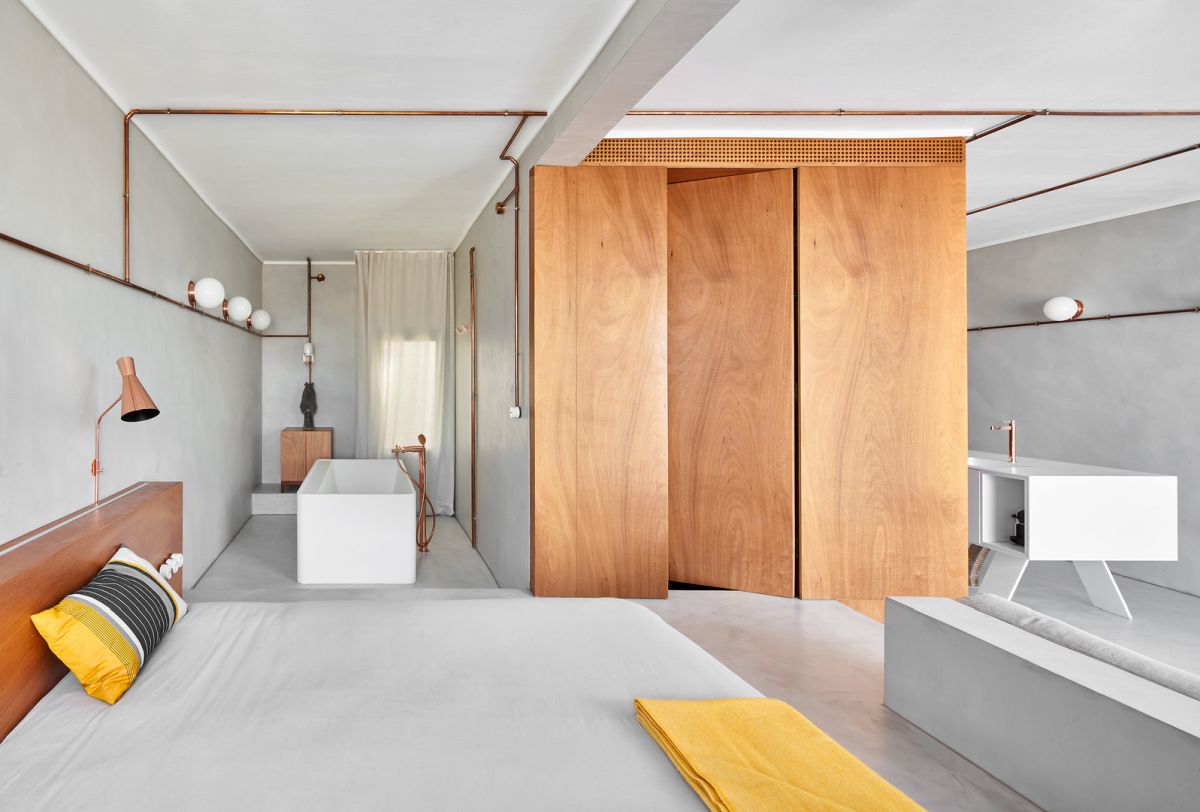 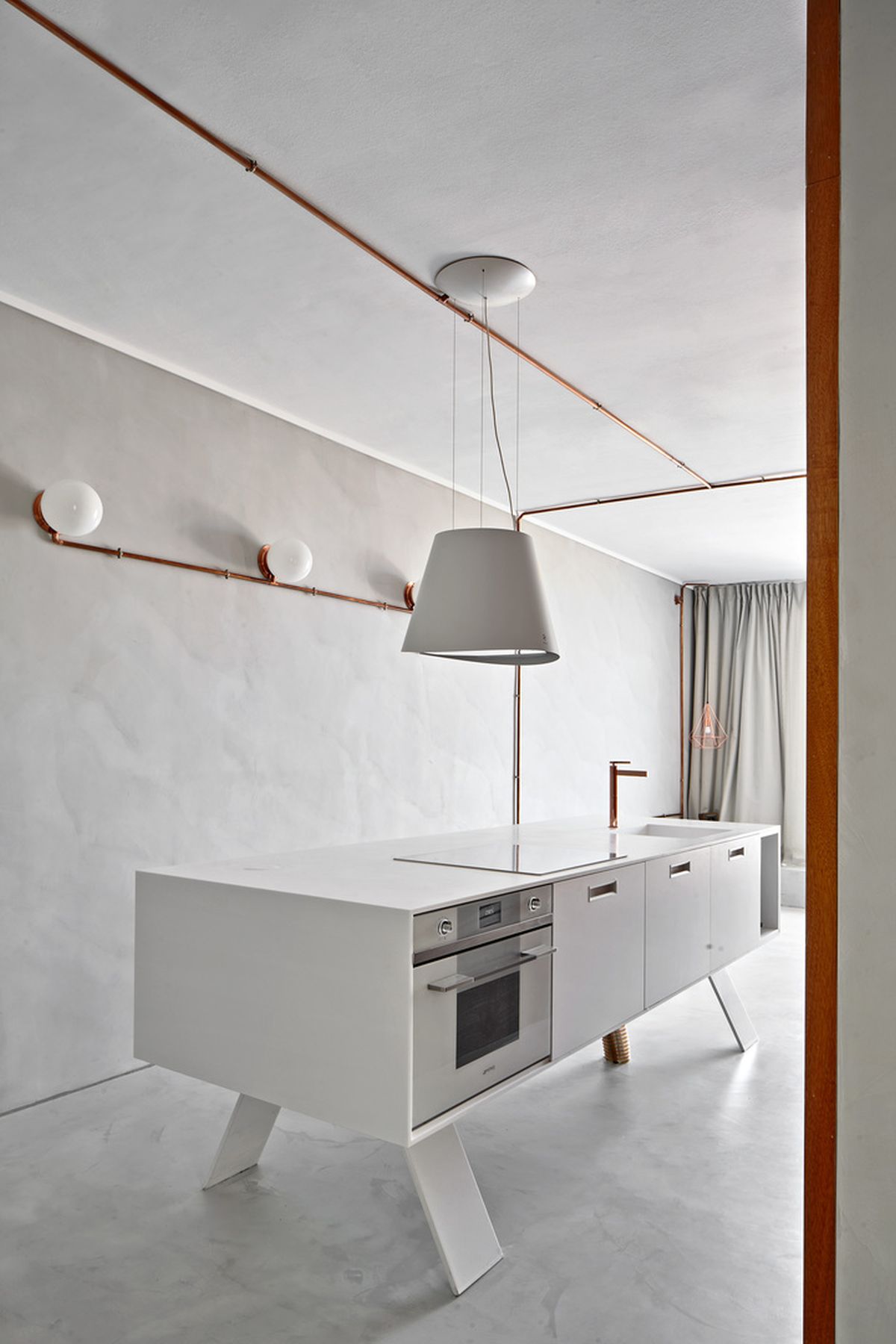 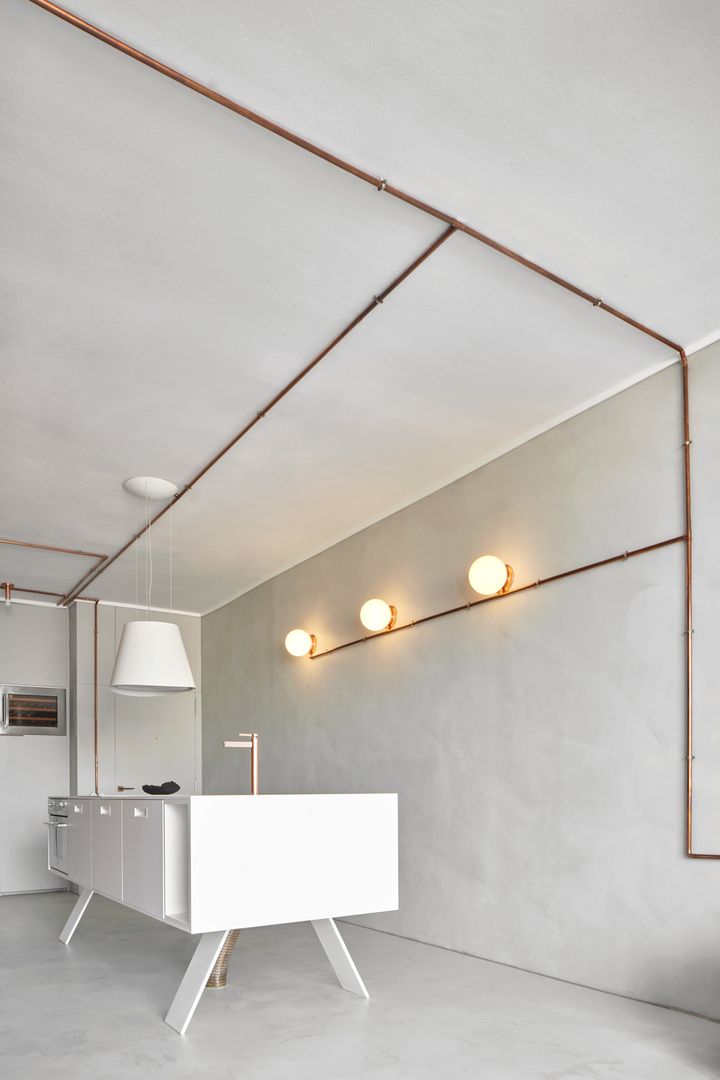 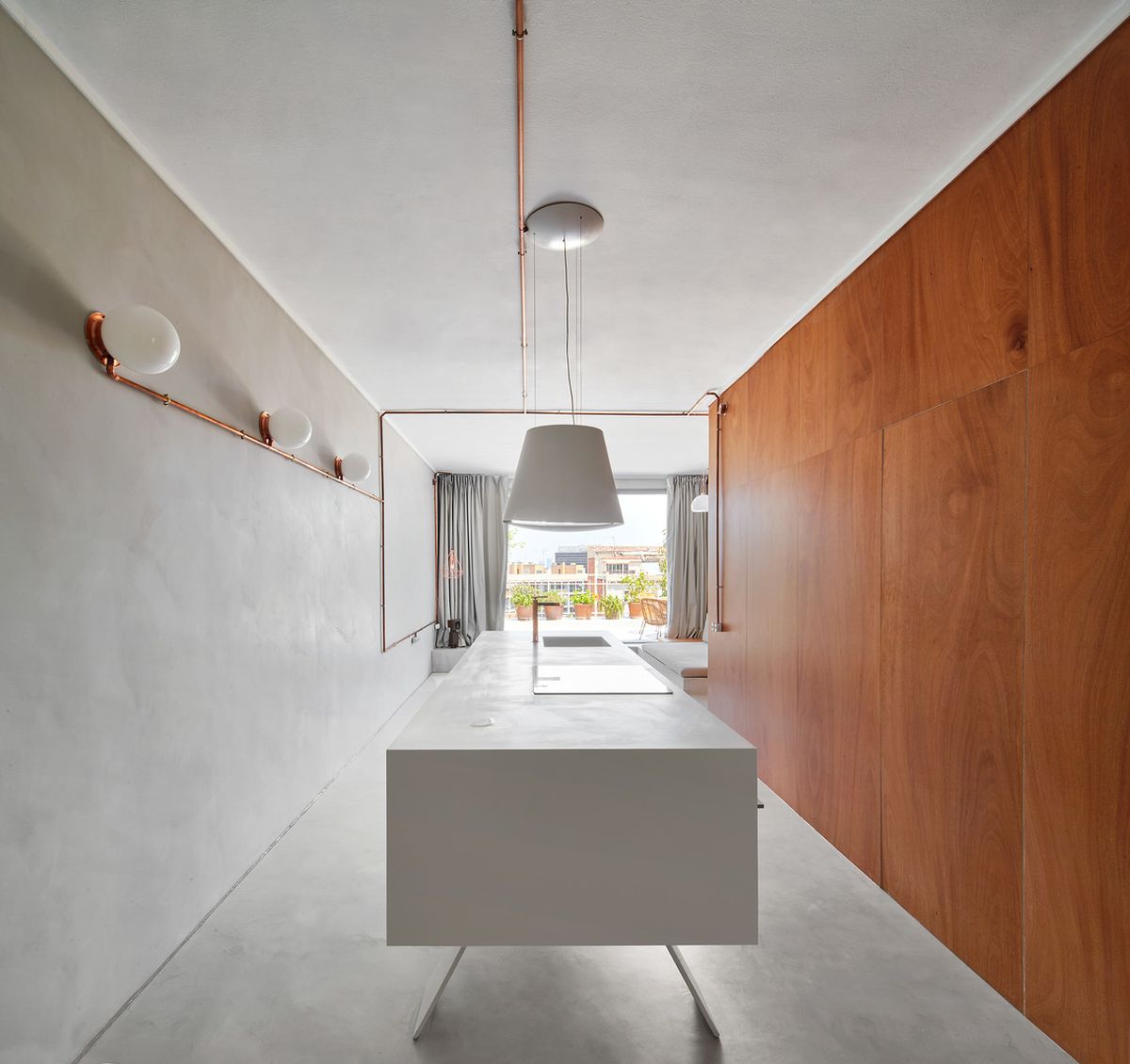 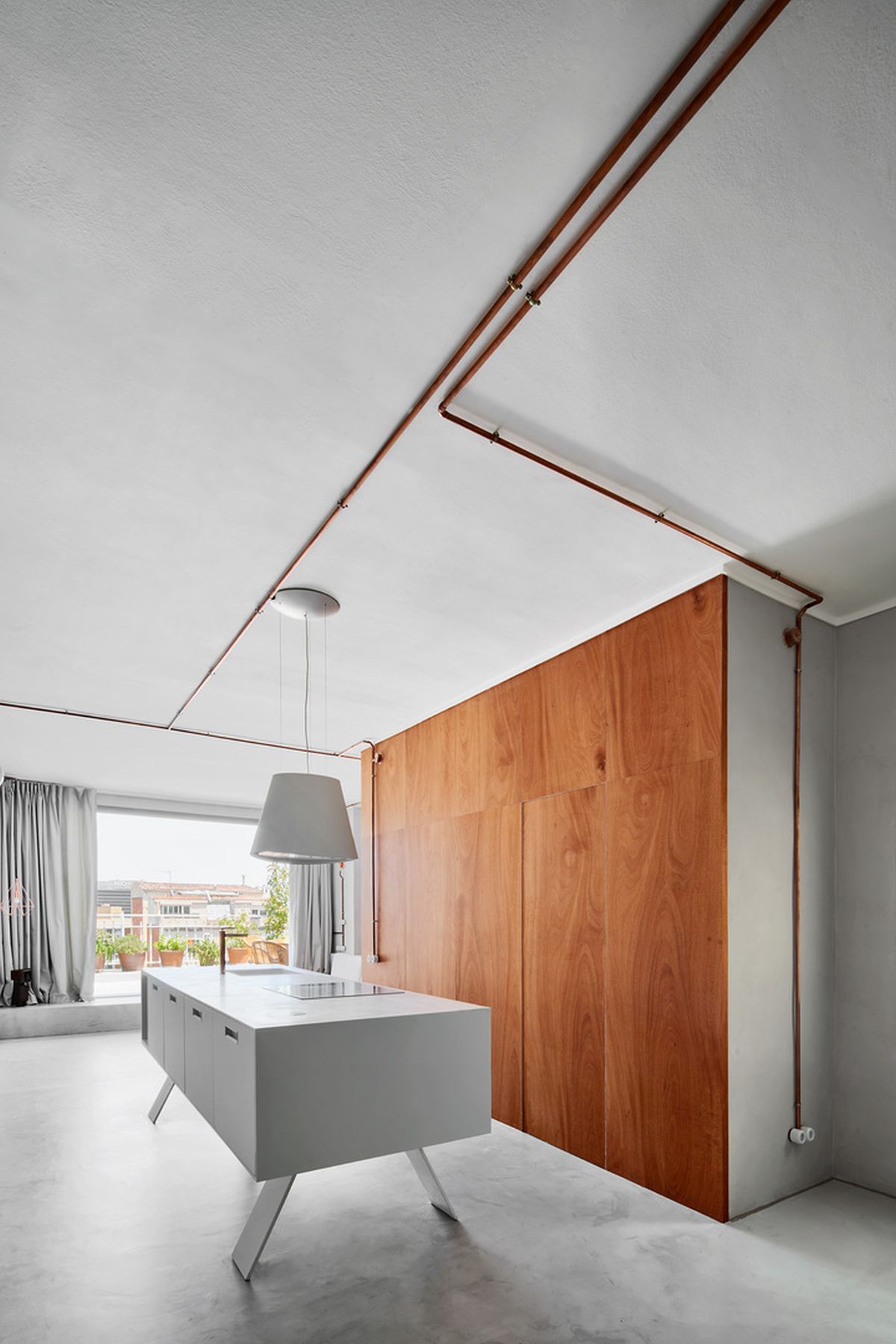 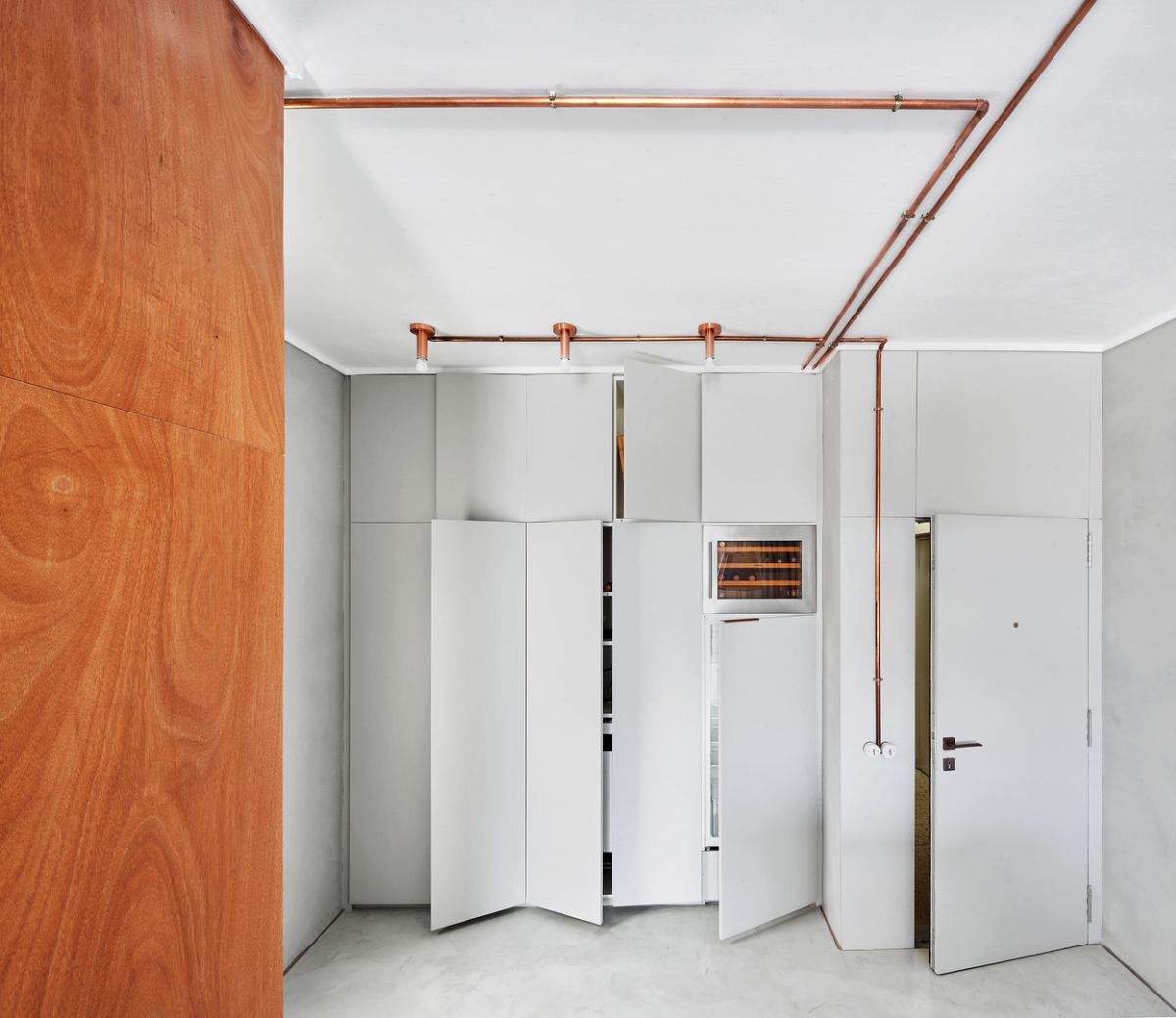 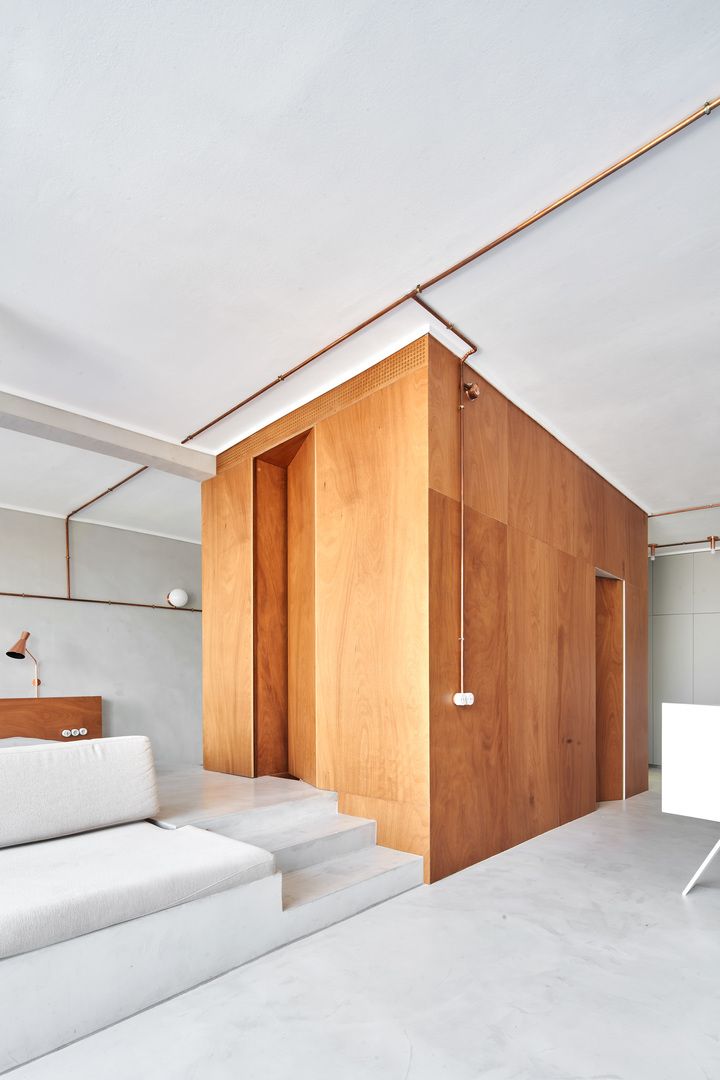 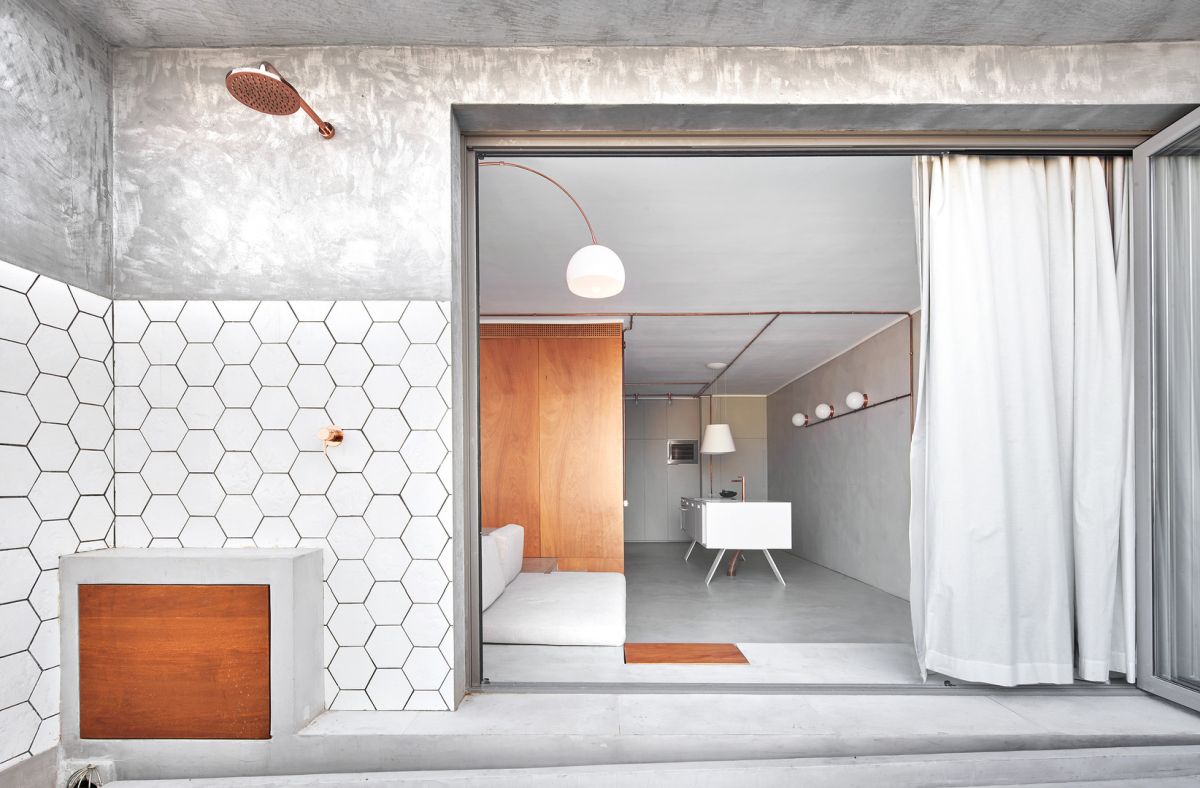 An uber chic and stylish pied à terre near Barcelona’s Olympic Marina has everything you need in one tidy and compact minimalist space. Designed by Cometa architects, the 56-square-meter apartment took shape by first deconstructing the space. The architects knocked down all of the interior walls and opened up the wall to the outdoor terrace, taking advantage of the amazing views.

The top-floor residence is located in a leisure area that has become very popular with tourists and locals, both young and old. The Marina district is home to Mediterranean beaches, water sports, and a huge array of restaurants. Built in 1991 as part of the Olympic Village, it has berths for 740 yachts.

Perfect for two, this vacation home involved a radical remodel of the existing apartment that was based on the principles of the navy: Make all space useful and eliminate anything unnecessary. The place is essentially a square box that is organized around a central “cabin” that contains all the laundry, plumbing and essential equipment, along with the toilet and closets. This central unit also acts as a divider between the kitchen and the living and sleeping spaces, which are also bordered by large sliding glass panels that make up the wall.

Fully done in concrete, the interior walls have been topped with a microcement that is light gray, creating an effect that was inspired by the marina’s raw concrete docks. Throughout the space, exposed copper pipes and fixtures run the necessary water and electrical connections and serve as a contemporary design element unifying all the sections of the apartment. The copper adds a warm yet functional element to the starkly minimalist design of the space.

To keep the look minimalist and eliminate any potential design issues, the architects incorporated underfloor heating so that radiators are not necessary. To make small spaces feel roomy and still be highly functional, this type of minimalist design is the most workable. This is because the decorating style not only focuses on the necessities but it rids the environment of cluttering visual elements.

Most all the kitchen elements, aside from the sink and the cooktop, are hidden behind a wall of doors that have no hardware, maintaining the clean look of the space as a whole. Well-placed ceiling fixtures that tie into the copper circuit provide extra light at this end of the kitchen space. A small but chic wine cooler is the only identifiable element and it is situated above the refrigerator.

The kitchen island is especially sharp because it looks more like a piece of furniture than a traditional island. The legs help keep the area feeling open and airy because the floor is not covered with the full visual heft of the island. The lack of any other exposed kitchen equipment also emphasizes the minimalist aesthetic.

With a starkly clean-lined backdrop of concrete walls and the single island element in the kitchen area, the copper piping that runs throughout the space is the only element of the decor that exudes warmth. The same metal is repeated in the choice of kitchen faucet hardware and connecting all the lights adds to its integral visual function.

The areas of the home that use water are highlighted by the only large, white pieces in the home, which are the bathtub and the kitchen island. They are essentially the only free-standing pieces of furniture as the other living and sleeping spaces are all built into the structure of the apartment. The custom wooden centerpiece and integrated closets that disappear when not in use constitute all the storage in the home.

Despite the limited size of the living space, the terrace greatly extends the usable area because of the large sliding glass doors that serve as the exterior wall. The combination nearly doubles the space and brings plentiful natural light into the apartment, along with the gentle sea breezes. In addition to the large slider, an ample window by the bed adds light to the back side of the central unit.

Another example of all the built-in elements is the bed and headboard combination. The base for the mattress is sunken into the floor and the headboard provides everything needed for the bedside. Copper lamps are attached to the wall and outlets are incorporated in both sides of the deep headboard, which takes the place of nightstands. In addition, the low window seat includes drawers for extra storage.

All the lighting fixtures, as well as the hardware for the standing faucet by the tub, are finished in copper. The use of a single metallic finish really unifies the space with a modern flair, drawing the eye from one area to another. The tub also provides a bird’s eye view out the window and is still private since it is set back from the main part of the space.