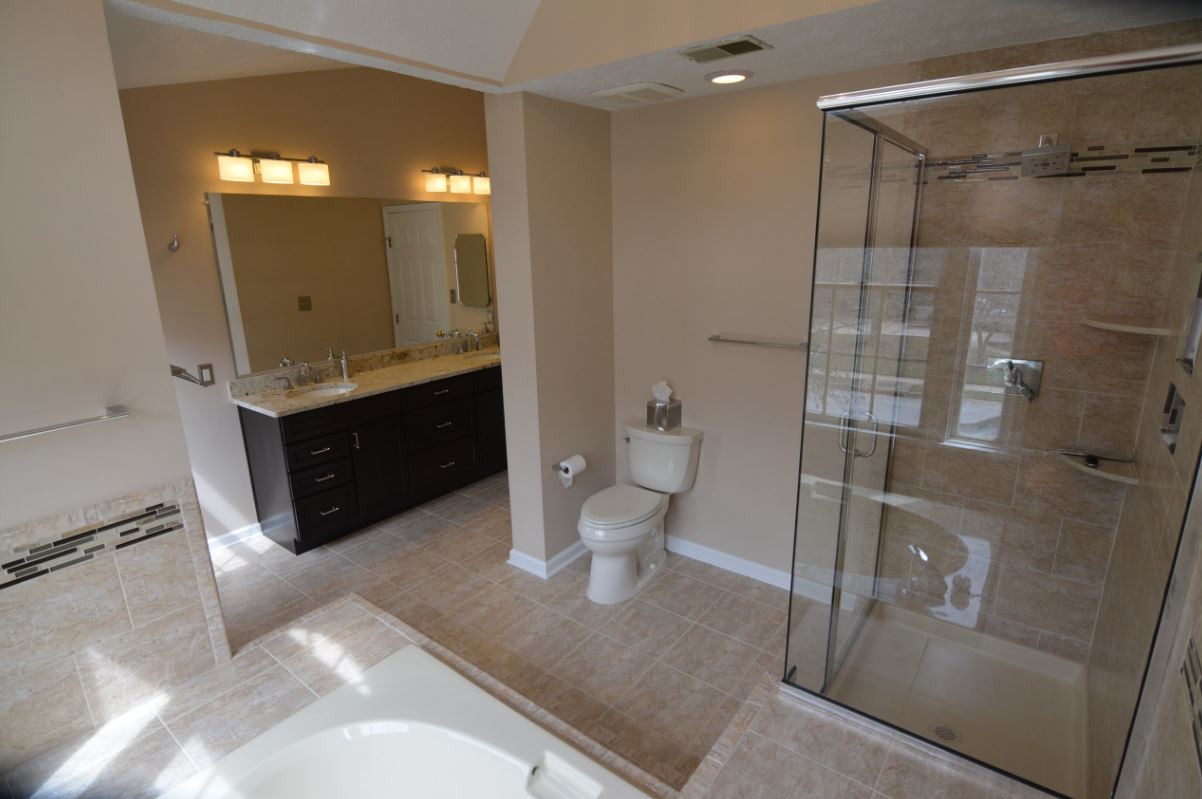 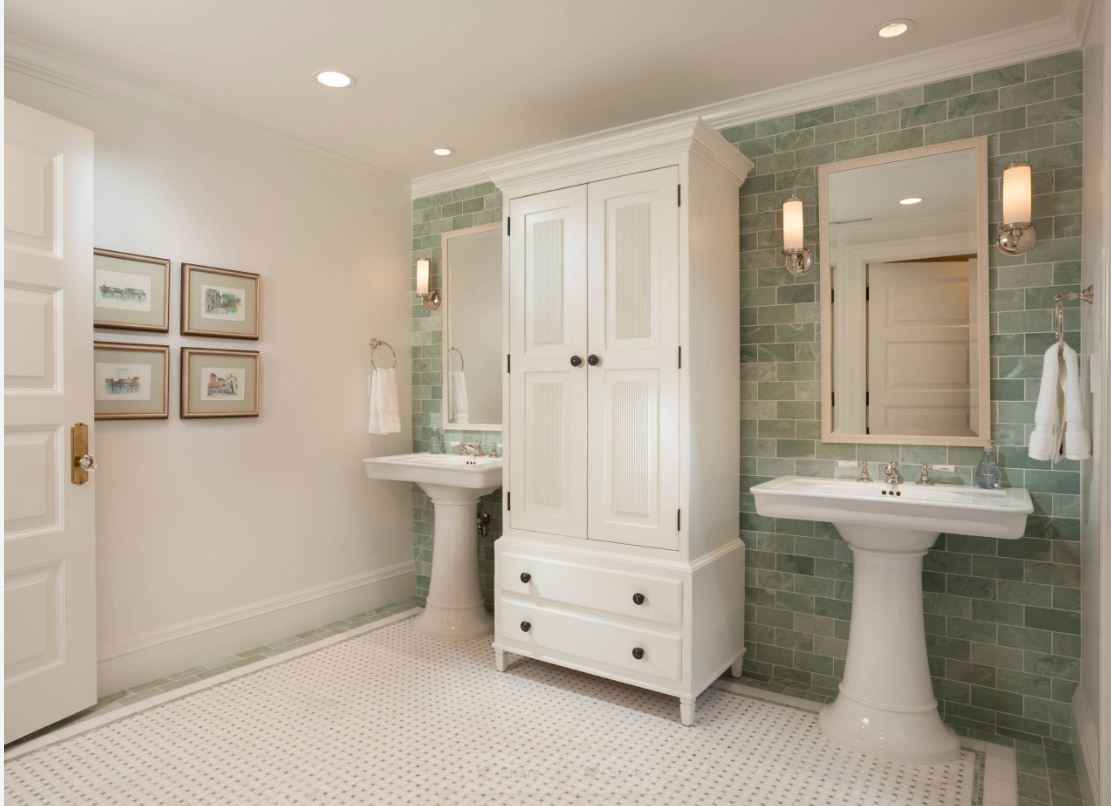 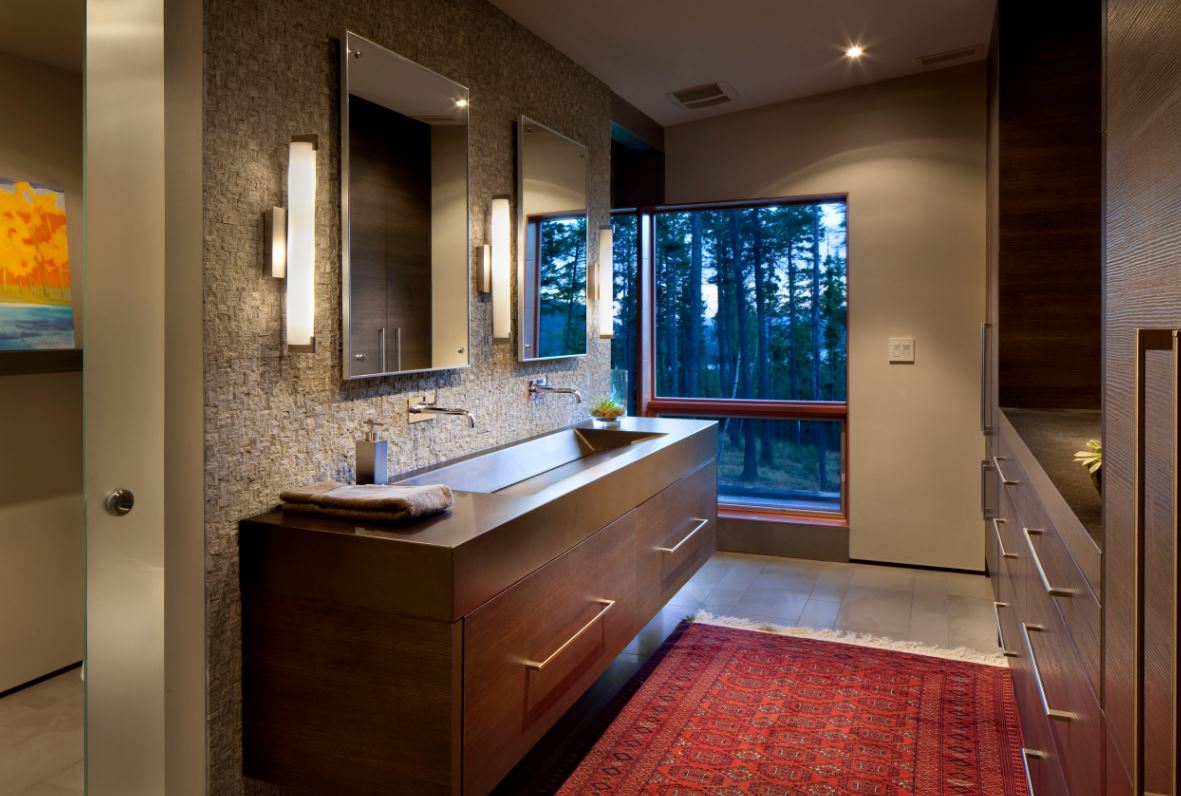 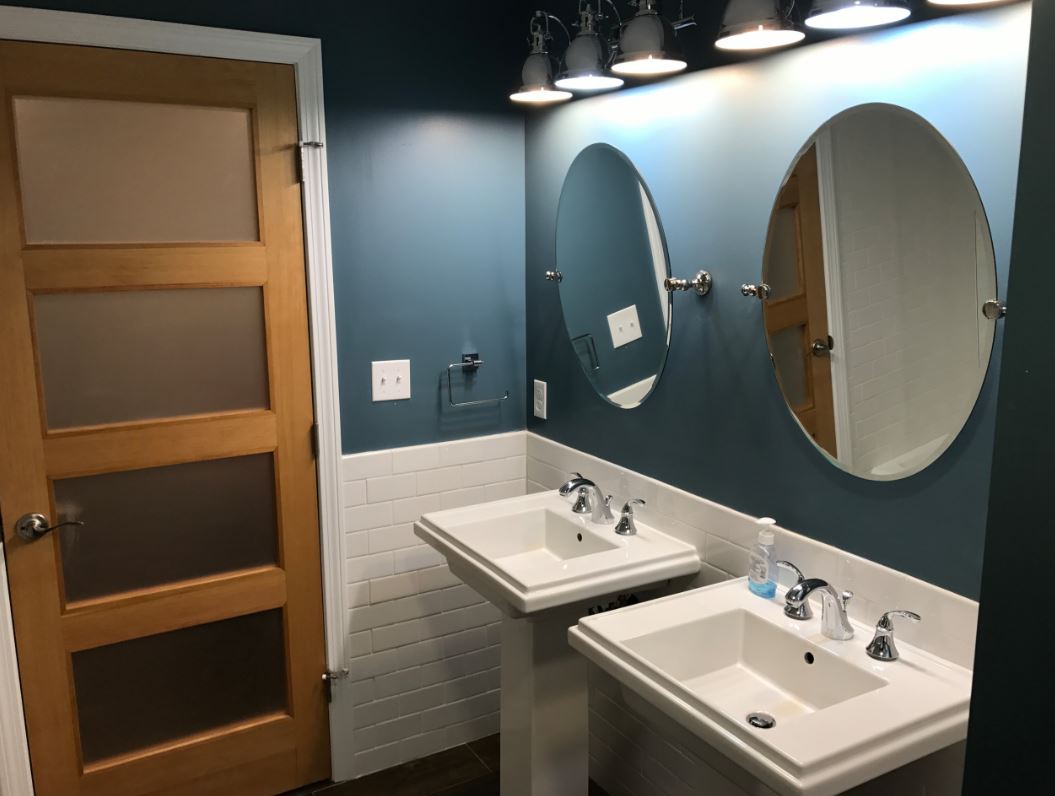 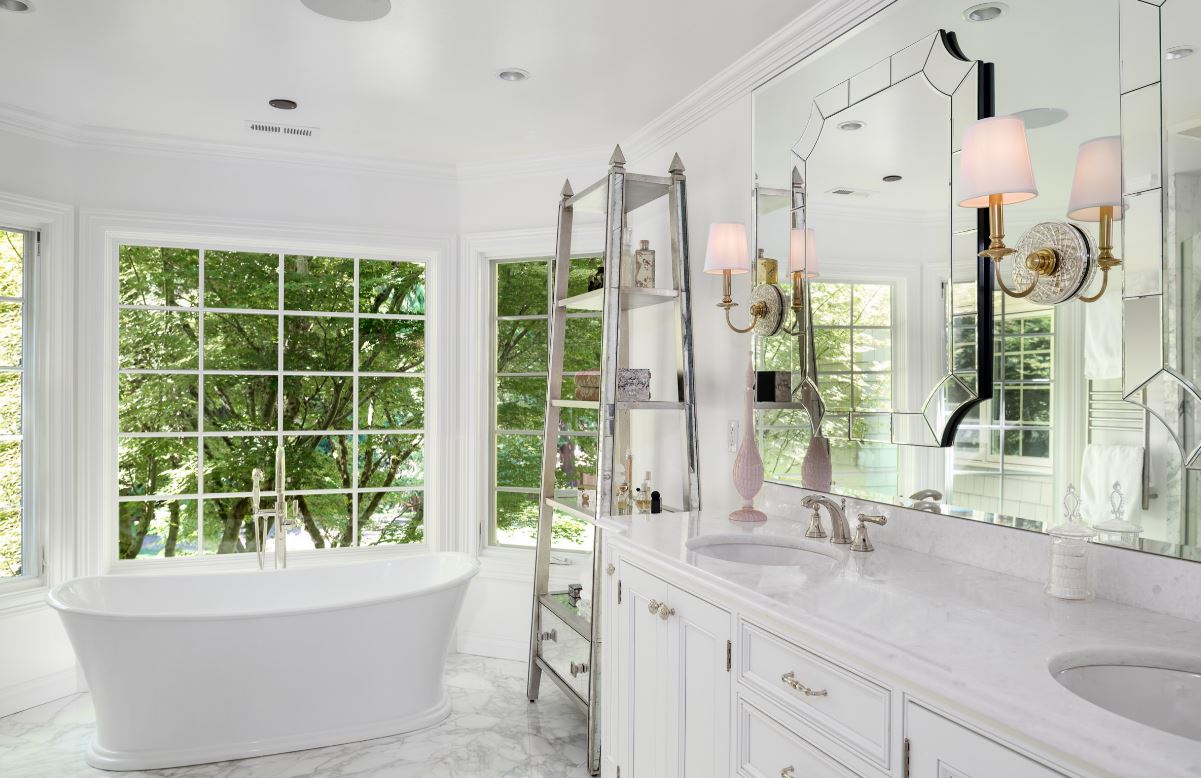 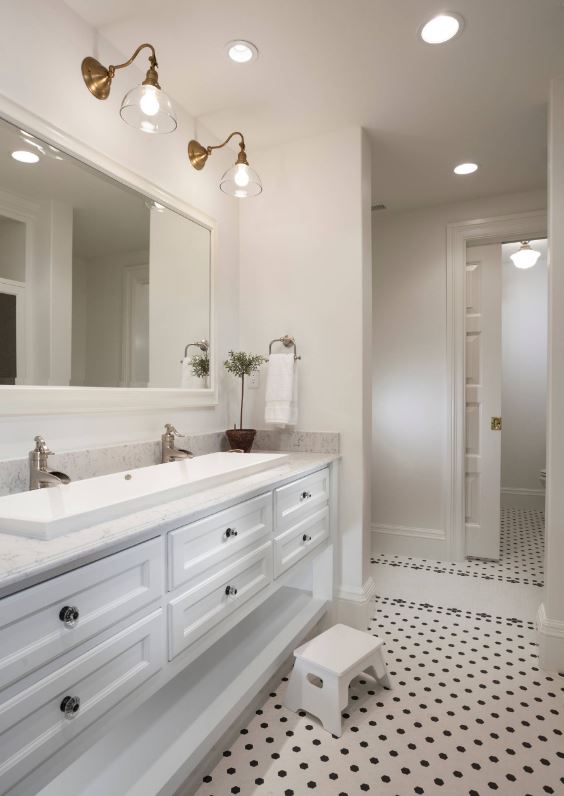 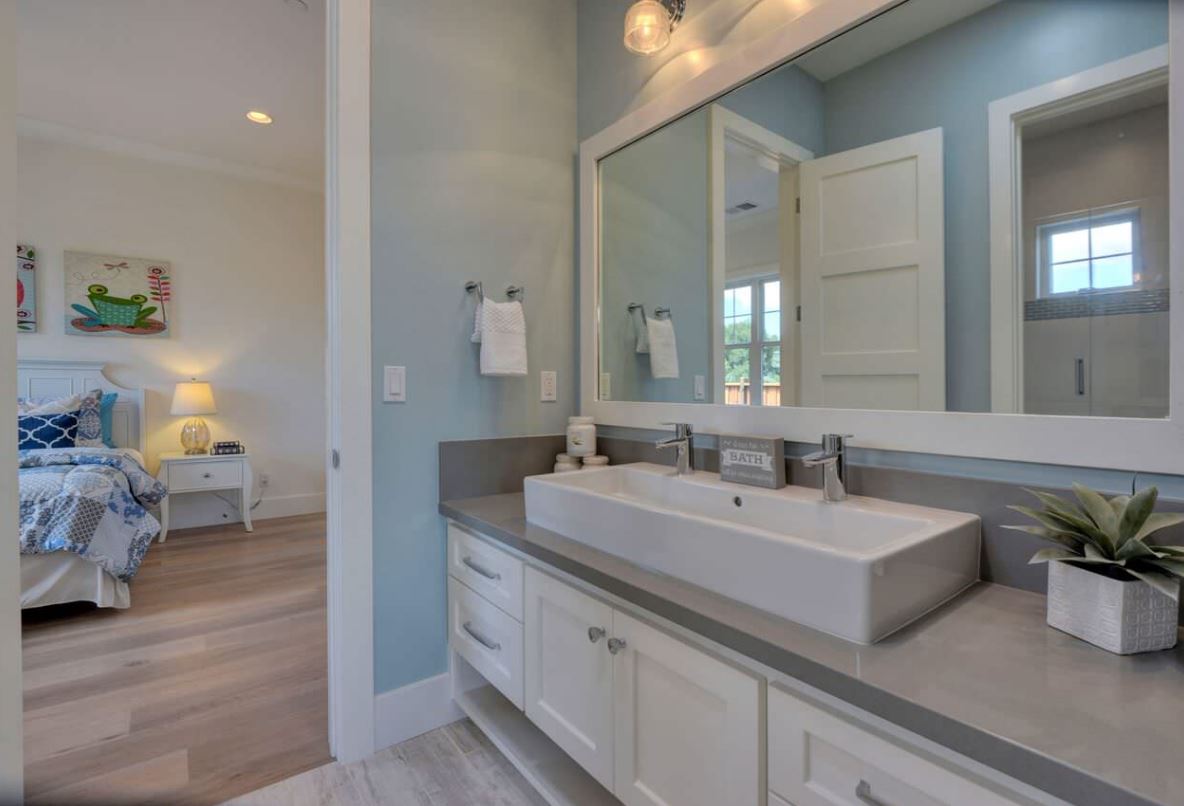 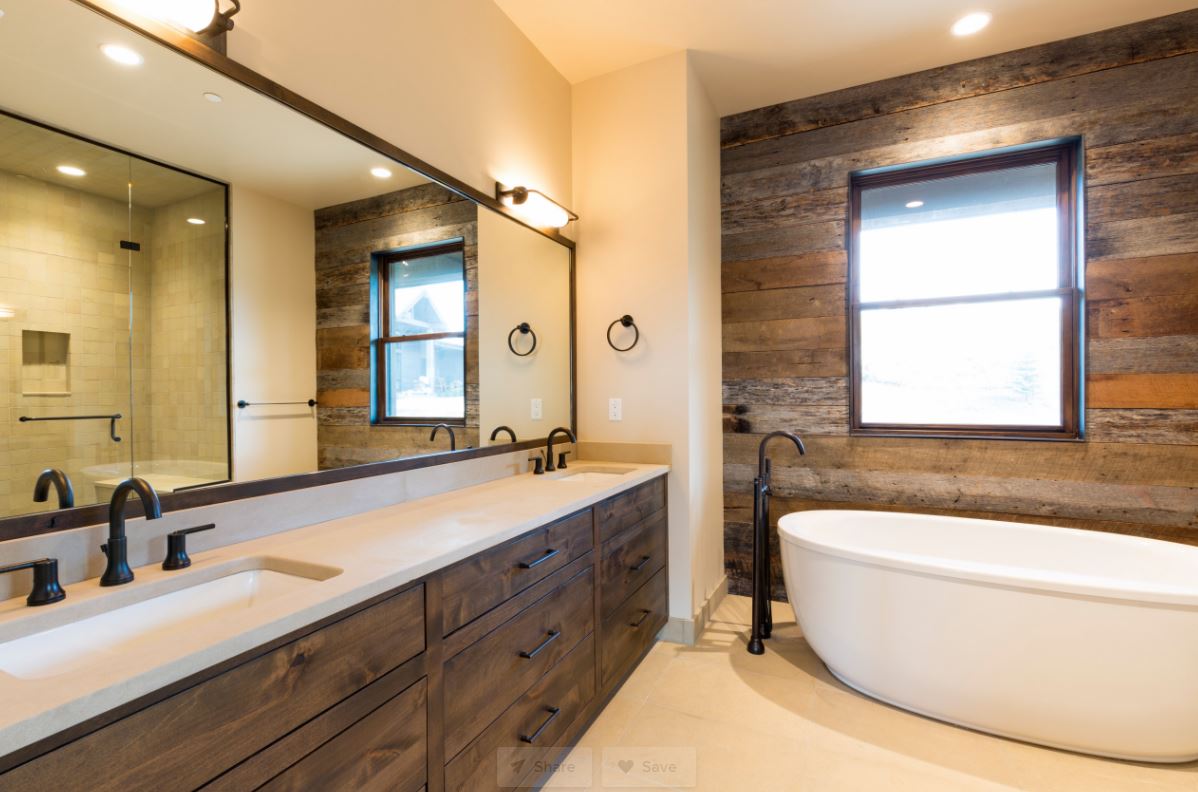 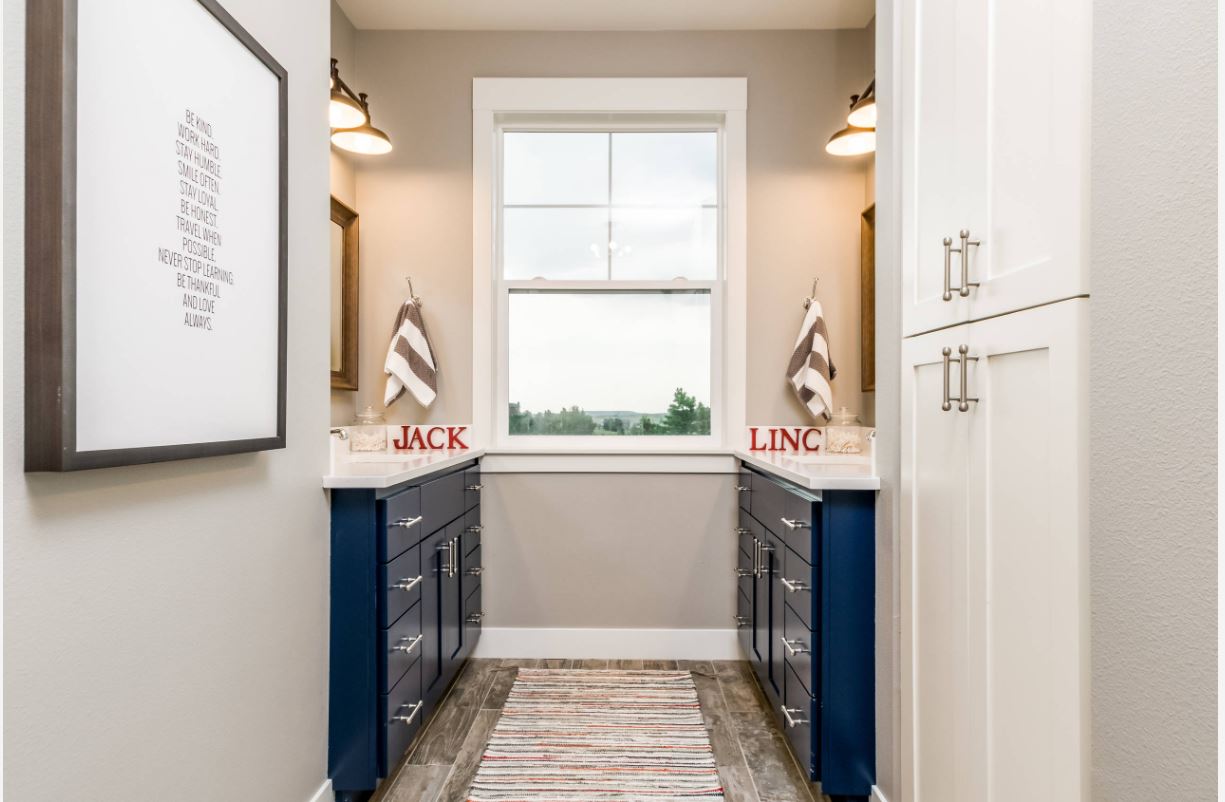 HGTV fans can probably tell you about the past, present, and future of the Jack and Jill bathroom. Often, the bathroom design label confuses viewers. Does the style strictly mean two sinks? Join us as we explore the popular home bathroom design.

A Jack and Jill bathroom is more than a bathroom with two separate sinks. Let’s learn what the bathroom design refers to and what you should know before adding one to your home.

History Of Jack And Jill Bathrooms

Jack and Jill bathrooms have been around for centuries. It wasn’t until the 1900s that the bathroom design became known. They were first reported in the 1960s by Abilene Reported News in Texas.

The bathroom design was accidental. Married couples didn’t have a problem sharing the same sink or entryway. At first, the bathrooms were for children.

In 1965 there was a spike in families with children under 18. Today, most families have one or two children. In the ’60s, some families had five children or more.

It is for this reason that Jack and Jill bathrooms became popular among adults. Children would share a bathroom connected to different rooms. Then, it was important for one child to enter the bathroom from their room.

After the early 1900s, homes featured indoor bathrooms, and people stopped using outhouses. The goal was to make the bathroom experience pleasant, so access was a priority.

Jack And Jill Bathrooms In Movies And TV

From “The Brady Bunch” to “Four Christmases,” you can see Jack and Jill bathrooms in TV shows and movies. Appearing before the public has helped the bathrooms become popular.

Jack and Jill bathrooms enjoy romanticized attention. You brush your teeth together and put on your makeup together. Whatever it is, you do it while sharing the same space. Another reason these bathrooms are so popular is that people idealize them.

People want large bedrooms, plenty of counter space, and, of course, a Jack and Jill bathroom. It’s often on their checklist. Sometimes, they know exactly why. Other times, they simply want to have the best of the best.

A Jack and Jill bathroom is technically a bathroom with two doors coming into it. Both rooms usually belong to siblings. Families with only one child or no children will have a bathroom that connects to other rooms.

Often, one of them will be a guest room. Whoever is in the room on the other side will have a private bathroom unless they have guests. This is a great way to save money, as putting in a bathroom that isn’t used is a waste.

Jack and Jill bathrooms have undergone modernization. Today, they have distinct definitions. The design not only refers to a bathroom with two doors.

This is partially true. You can say a bathroom has Jack and Jill sinks, which is common in bathrooms with a single entrance. Unless there are two entrances, it isn’t technically a Jack and Jill bathroom.

That doesn’t mean you can’t use the term to describe them. It means that if you do, you will need to specify that you’re referring to a bathroom that has two sinks but one entrance. It also means that when a realtor says it, they have two entrances.

Bathroom For The Master Bedroom

In larger homes, those that lead to a master bedroom often have two bathrooms. A closet, shower, or sitting room can be between them, with the master bedroom on the other side.

Designs like this are expensive, but if you have the money and space, then why not? Who doesn’t want a private bathroom? Sharing one with your spouse isn’t always ideal.

Hiding The Toilet Away

For added privacy, a Jack and Jill bathroom will have a toilet stall. With this feature, the sink is still available, and one door could remain unlocked. Even if you have a small bathroom, you can hide the toilet away.

Thin walls are all you need to create a stall. Close in the toilet so that whoever is using it feels safe. Small bathrooms can easily become cramped if you add the extra walls. Those with claustrophobia beware.

Another reason to add a stall if you have the room is for children. Children can have the privacy they need with a bathroom stall. Young children shouldn’t remain in locked rooms for extended periods.

It’s important to make those using a Jack and Jill bathroom feel safe. You’ll need to install locks on both doors. Inside locks should remain unlocked when the bathroom is empty.

Outside locks should remain locked unless someone is in the bathroom. It sounds confusing, but once you use the locks, it will become natural. You lock the door when you use the bathroom. This is just one extra lock to check.

Note: if you have kids, make sure they know never to lock the outside of the bathroom without making sure no one is in there. Accidents can happen, and people can get locked in if you’re not careful.

You don’t just need two doors for a Jack and Jill bathroom. The doubles do not stop with two sinks. Two towel rods, light switches, and shelves are popular features.

Anything that comes in pairs is fine except toilets. For couples, you can even put a shower and a bathtub separate. And for all others, two of everything else is perfect.

Sharing hand towels is an unsanitary practice, so make sure two are available. For your bathroom cabinets, install one over and under each sink. This way, each user has an individual space.

Cost Of A Jack And Jill Bathroom

Adding a Jack and Jill bathroom can be expensive. Even the cheapest layout can cost $10,000. The high price includes plumbing, extra walls, two doors, and so on.

Relax, there are cheaper alternatives to get the bathroom you desire.

One method for a cheap Jack and Jill bathroom is to convert a regular bathroom. With plumbing intact, you would only need to add an extra door. An experienced contractor could install the door, and it wouldn’t be expensive.

From there, it’s all preference. Add another sink to make an ideal design. You can even do very cost-efficient additions like two laundry baskets, wastebaskets, and shelves. And definitely two mirrors.

Are Jack And Jill Bathrooms A Good Idea?

Jack and Jill bathrooms are a great idea for large families. They are efficient and cost-effective. As a shared bathroom space, it offers plenty of privacy. It’s built with two doors, providing easy access for multiple rooms. Those who have added the bathroom to their home have marveled at how it improved their quality of living.

What Are The Best Ways To Decorate A Jack And Jill Bathroom?

When decorating a Jack and Jill bathroom, use a style that isn’t gender-specific. If you have multiple children of different genders, you wouldn’t want to make them feel uncomfortable in their bathroom space. You’ll need to select neutral colors and themes, so your children won’t feel alienated or neglected. With many designs to choose from, including a modern Jack and Jill bathroom layout, you won’t have any problems finding something your family will enjoy.

Does A Jack And Jill Bathroom Add Value?

A Jack and Jill bathroom will add value to your home. The bathroom isn’t cheap to install, but you should treat it as an investment. If you sell your home, you will see a return and possibly more. There isn’t a shortage of bathroom remodel ideas, so take your time to find one that complements your home.

A Jack and Jill bathroom may not be right for every home, but if it makes sense, you would be better off with one. As a bathroom design, they help save space and money in the long run. So far, it seems to be the best alternative to a private bathroom. Their design makes them ideal for large families. Plus, they provide added convenience for multiple people.