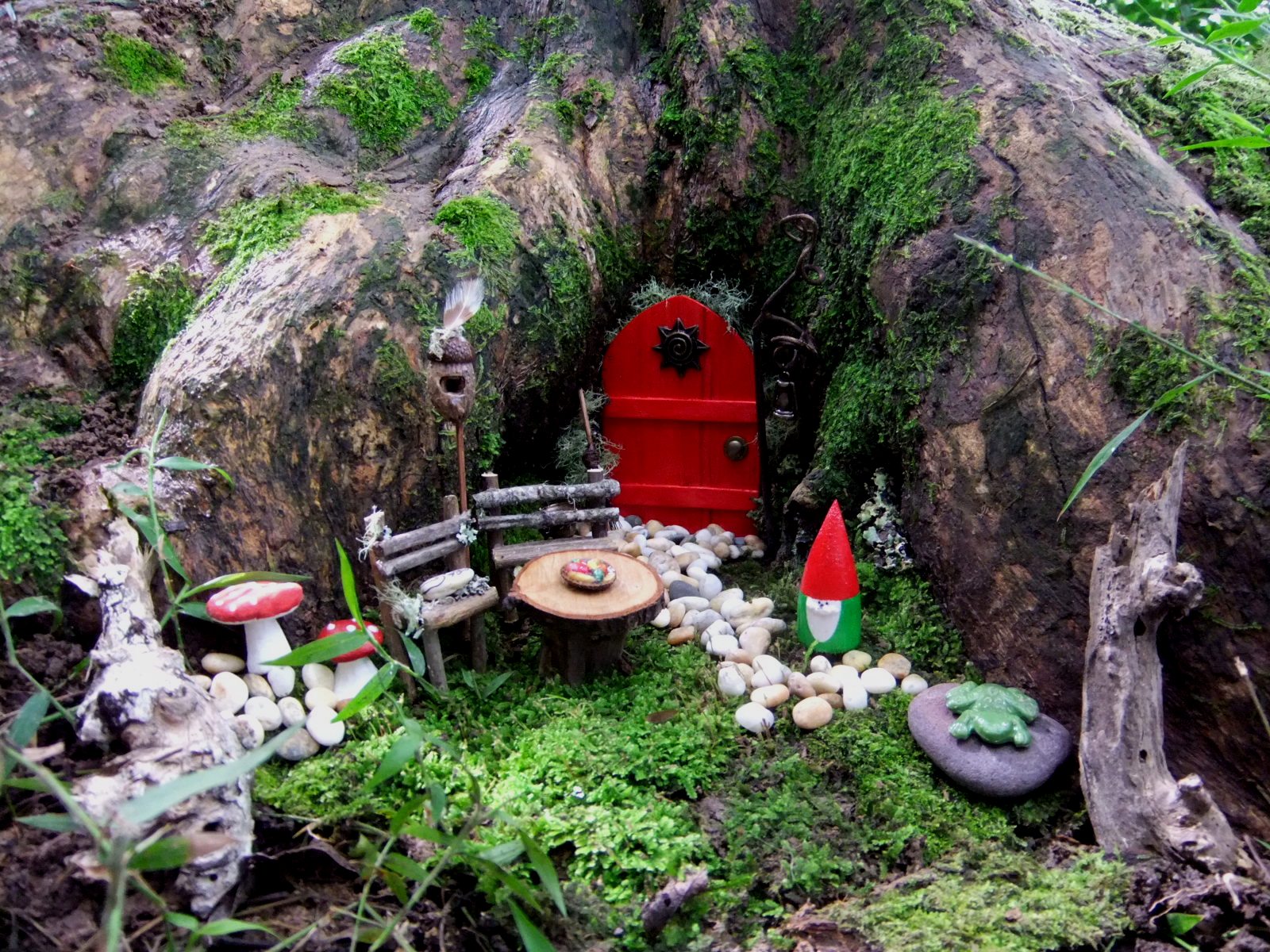 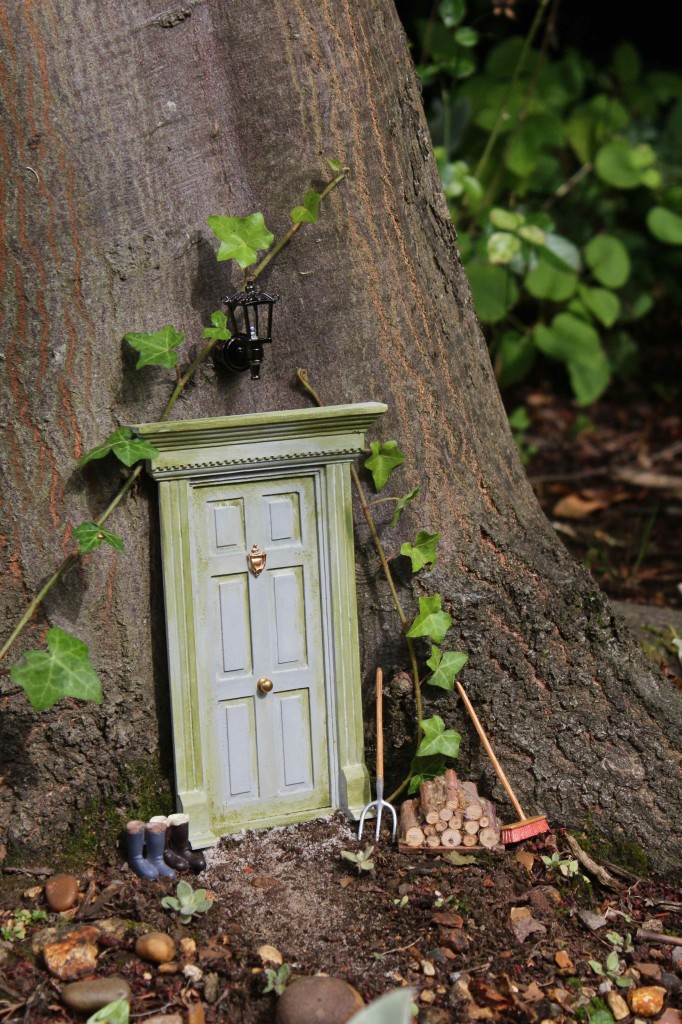 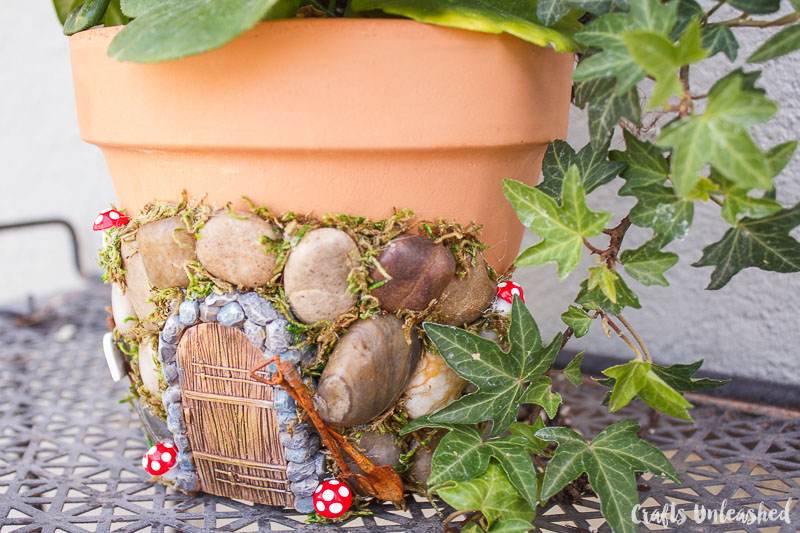 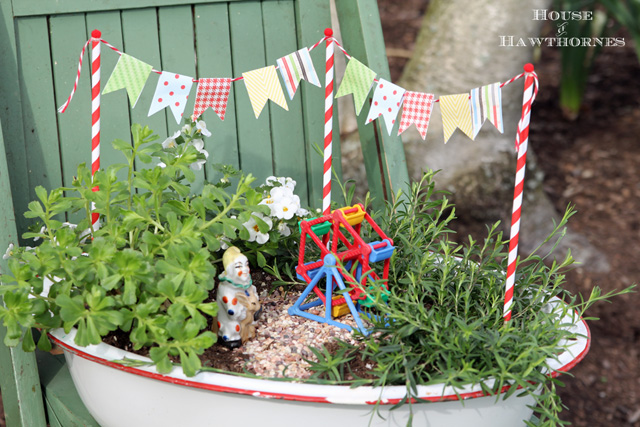 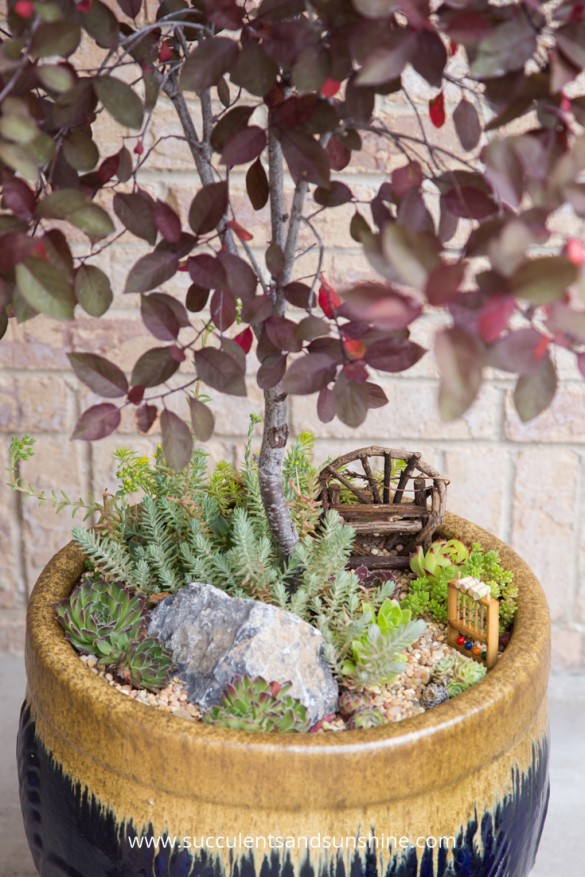 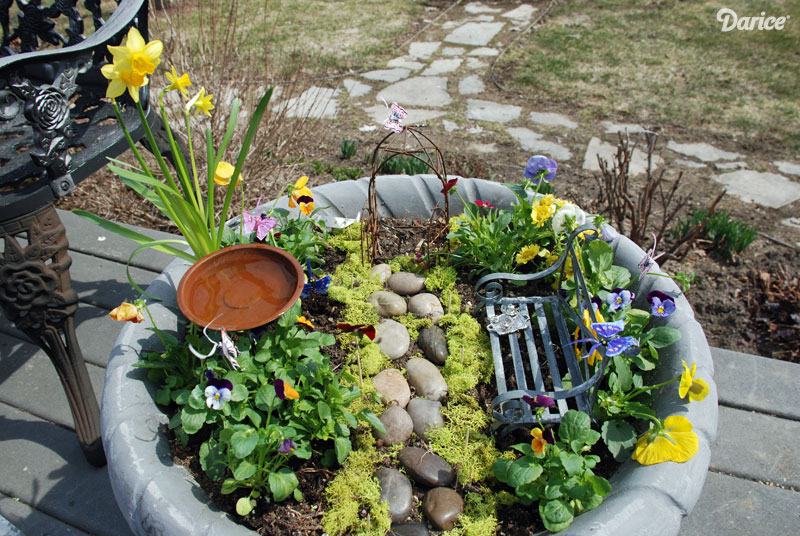 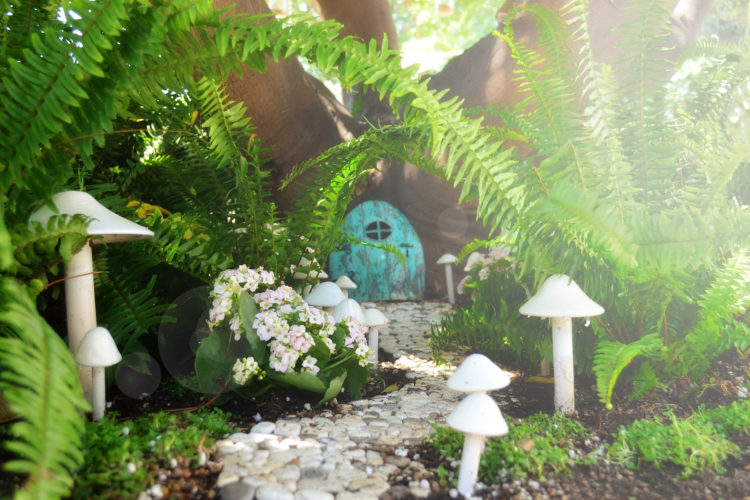 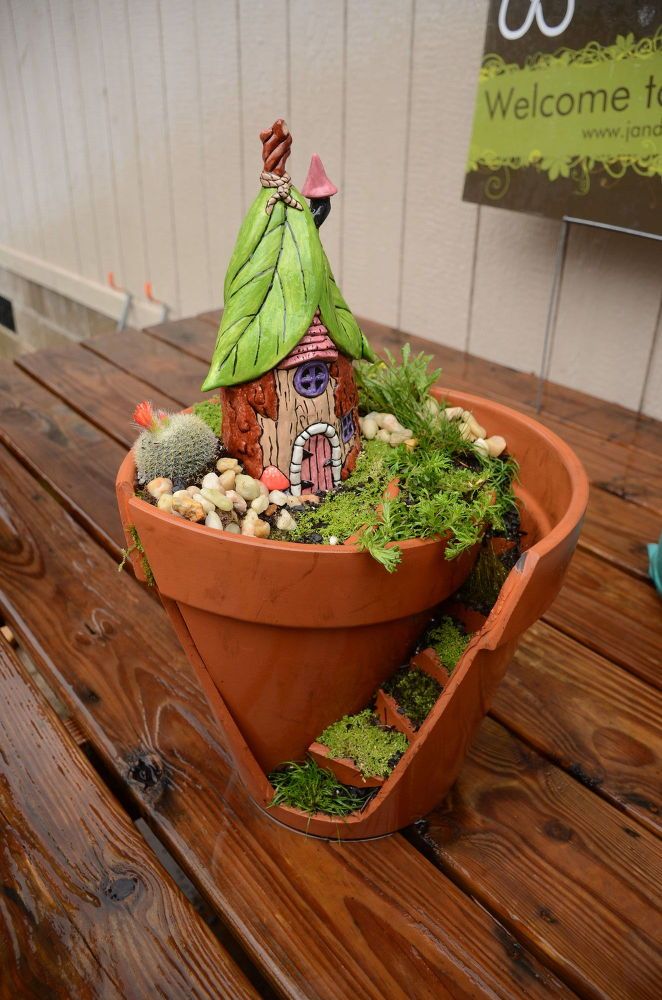 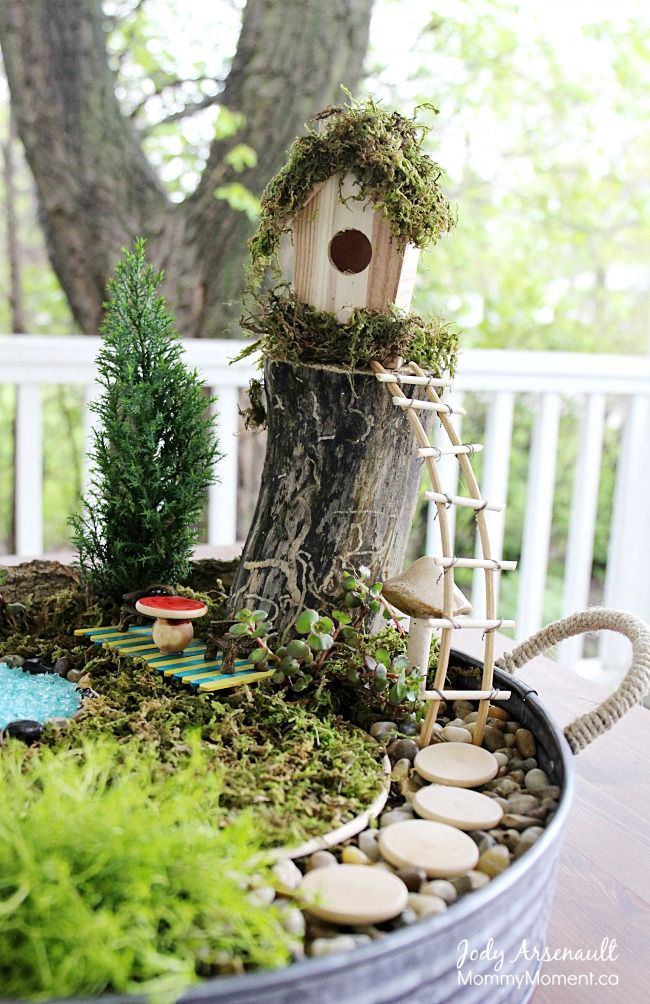 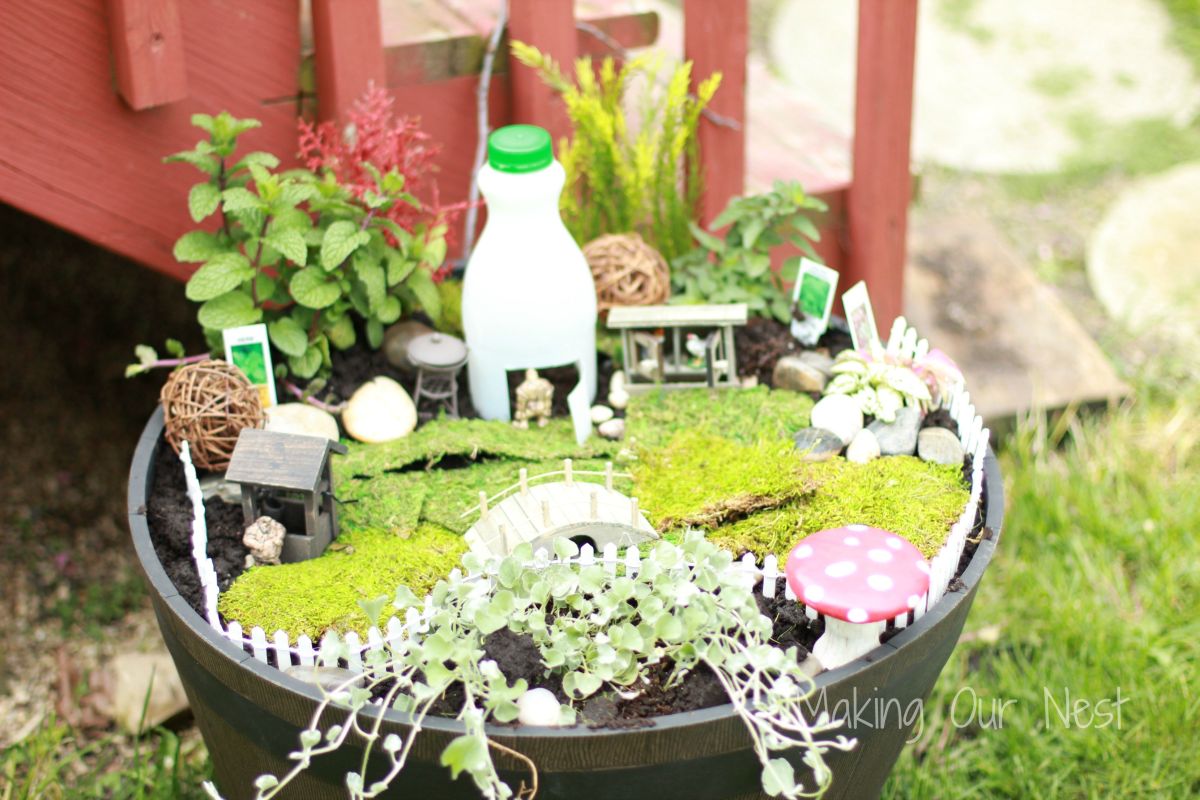 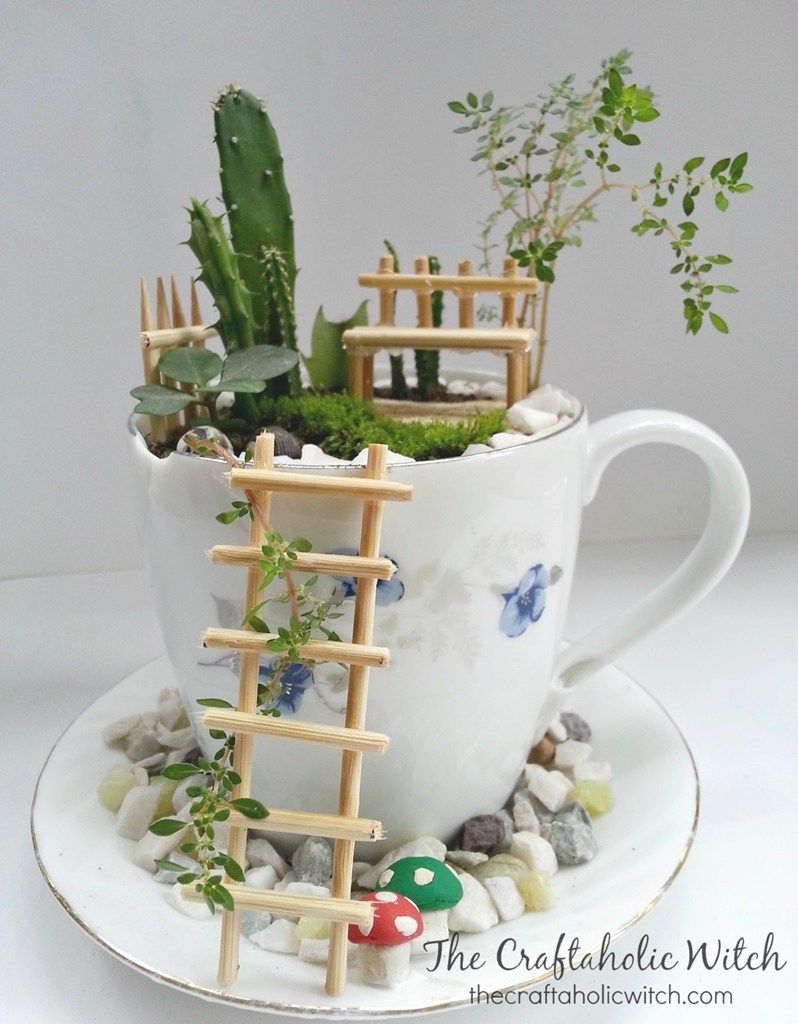 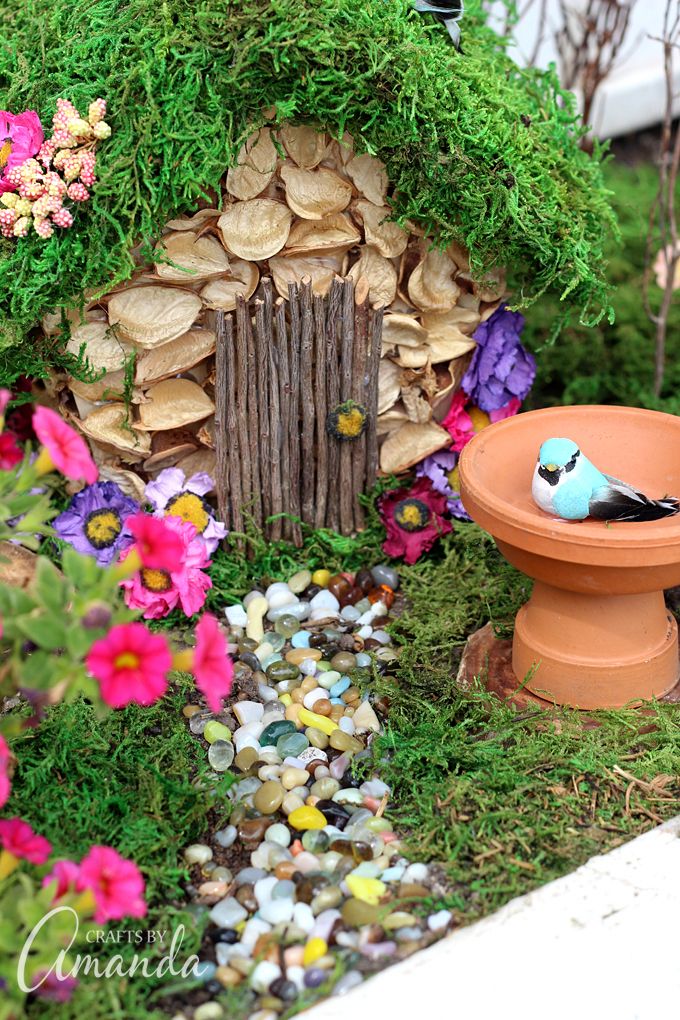 A fairy garden is the perfect DIY craft for those moments when you want to beautify your home without going all out or making any big changes to the decor. The cool thing about a fairy garden is that most of the times it’s small but has a lot of details and there are lots and lots of ways in which you can customize it. In fact, no two are the same. Fairy gardens are also very cute because everything is a miniature version of something. It’s like a garden for tiny creatures.

Before you start a fairy garden you should have a general idea of how you want it to look like or at least the form and size you want it to have. You can then put together a list of materials that you’re going to need. You could use things like a wooden birdhouse, twigs, silk flowers, moss, tiny flower pots and even artificial birds. These were some of the materials that were used when creating the garden featured on craftsbyamanda.

Like we said, a fairy garden can be very small. It can even fit in a cup. Actually, that’s exactly what was used when putting together this lovely cup garden featured on thecraftaholicwitch. The little ladder is just adorable and you can make just like it out of wooden craft sticks or twigs. If you like the idea, you can make your own cup garden and you can populate it with tiny cacti or with succulents.

Not all fairy gardens are tiny…pr at least not tiny enough to fit in a cup. Some be quite big compared to that. Instead of a cup you can use a large planter or a bucket. The ornaments can be crafted or they can repurposed items such as toys. It’s a lot of fun coming up with ideas for this sort of project. If you want some inspiration, check out making-our-nest.

When you add up everything that goes into making a fairy garden, it can be a pretty costly project, especially if you plan to buy everything ready-made. Still, if you’d like to get your hands dirty and to actually make some of the things yourself, you can actually come up with a budget-friendly plan. You should check out mommymoment to find more inspiration. There’s a tutorial here that shows you how to make a fairy garden using the things you can find around your house.

Where one sees a broken pot, another sees the perfect base for a fairy garden. That’s pretty cool actually. As long as the pot is not totally broken, it can still be used as a container. You can use the broken pieces to create tiny stairs or to shape the garden. To better visualize the whole thing, check out jandjacres. This lovely garden is decorated with pea gravel and a cactus but that’s merely a suggestion.

A fairy garden actually has “fairy” in its name and that immediately suggests something whimsical and magical. If you decide to go on that road with the design, you can use small string lights to create the desired look and ambiance. It would be nice to choose a tree in your garden and to build the fairy garden at its base. You could use mushroom ornaments, tiny gnomes and other decorations. You can also use small pebbles or stones to shape the garden. Have a look at the garden showed on farmandfoundry for inspiration.

Building a fairy garden sounds like something kids would enjoy doing. As long as you don’t overcomplicate the design, it should be a fairly simple project. Start by gathering the supplies. Go ahead and find some ornaments that you’d like to use and get the kids involved as well. This mini garden bench featured on blog.darice is simply adorable. The garden was also decorated with a mini wire arch and door, a mini bird bath, some river rocks, moss and assorted flowers.

If you like the idea of having a fairy garden in your home but you’d rather not add another large planter to the decor, you can just use one of the existing ones. Look for a large planter that has plenty of exposed soil at the surface. Add some succulents or small plants and some rocks and pebbles to fill in the gaps and, at the end, add the finishing touch: a tiny house ornament or a tiny bench like the one shown on succulentsandsunshine.

If you want, you can pick a theme for your garden. For example, a circus-themed fairy garden can be a really fun project. There’s one featured on houseofhawthornes. It has a tiny ferris wheel, clowns and colored garlands. It’s all fun and colorful and it really suggests the idea of a circus.

The project featured on consumercrafts is not a fairy garden per se but it has a lot of magical charm. The idea is that a planter can be decorated to look like it has a tiny door that leads to a fantastic place. If you want to make something just as lovely, you’ll need a terra cotta planter, a tiny door kit, moss stones, a mini welcome sign and miniature garden tools.

There’s something very cute and mysterious about tiny doors. Consider this: you’re out in the garden and you look towards one of the trees only to discover that there’s a tiny door at its base, looking like the entrance to a house inside the tree trunk. It’s such a charming idea that it makes one regret not having a garden with trees. {found on katescreativespace.

Installing a tiny door on the tree trunk of a tree actually seems like a really great idea, not just for private gardens but as a general project. You can even go out in the nearby forest or park and putting something like this together. Wherever you decide to build the secret tree door/ fairy garden, make sure to check out elowezil to get inspired.