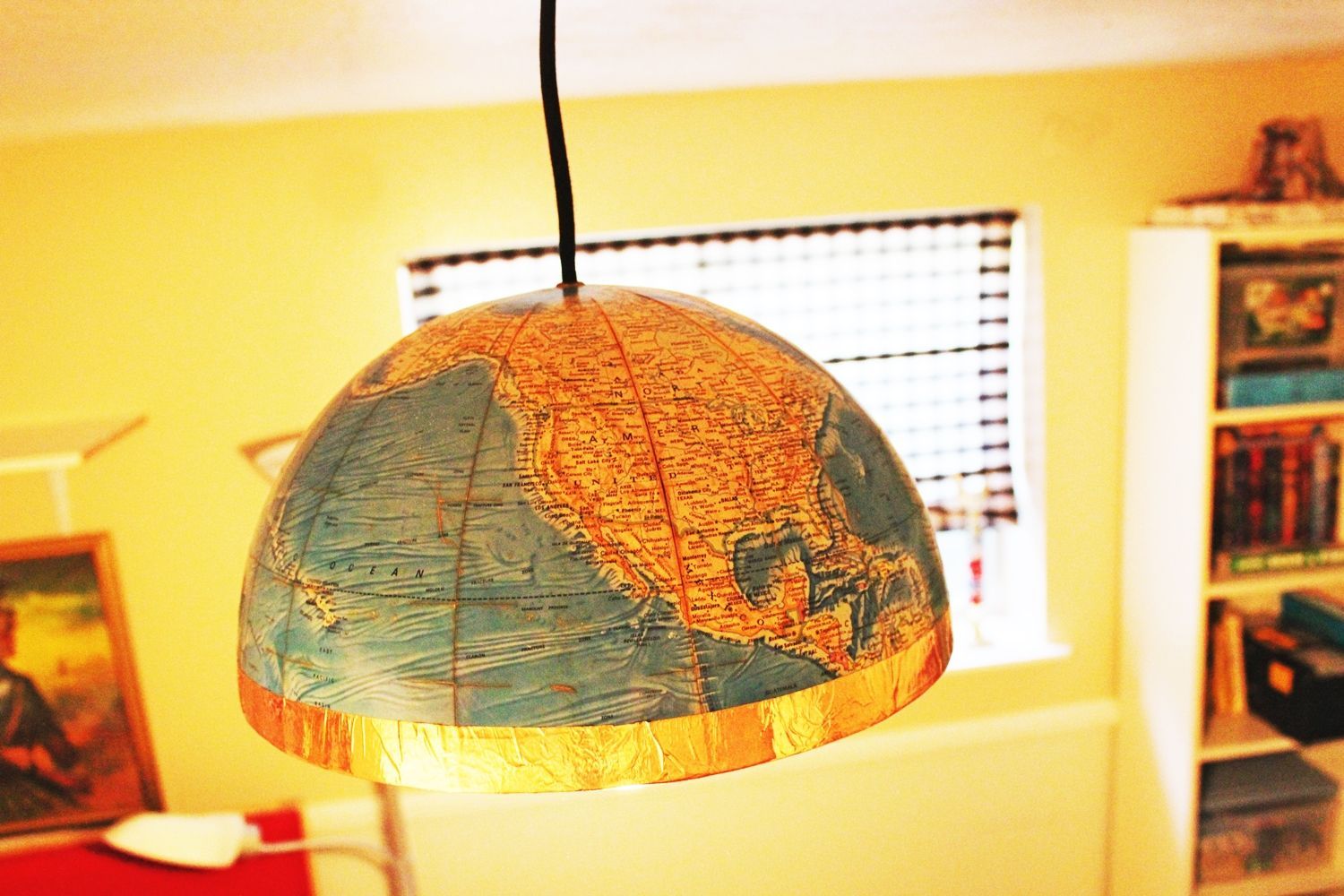 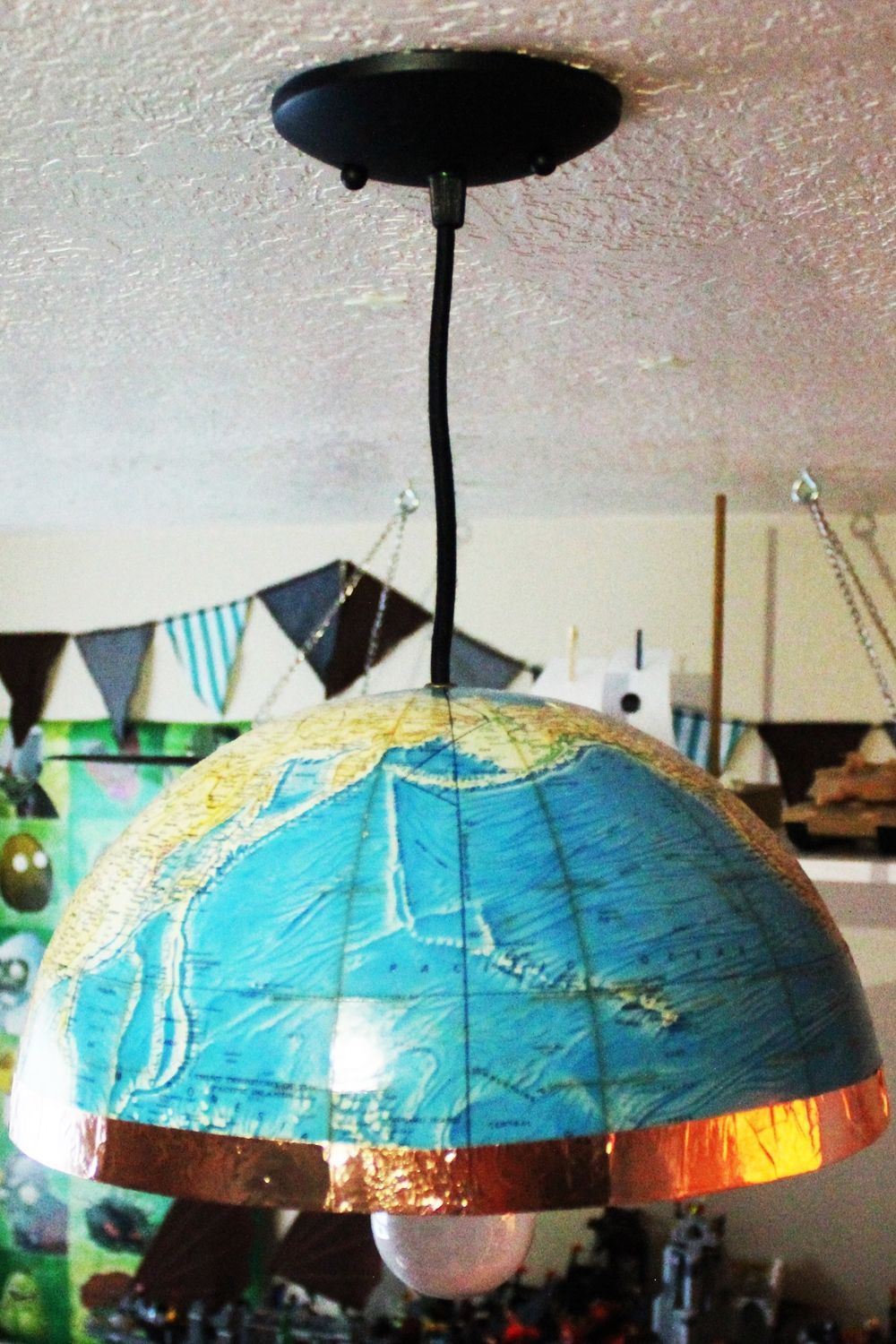 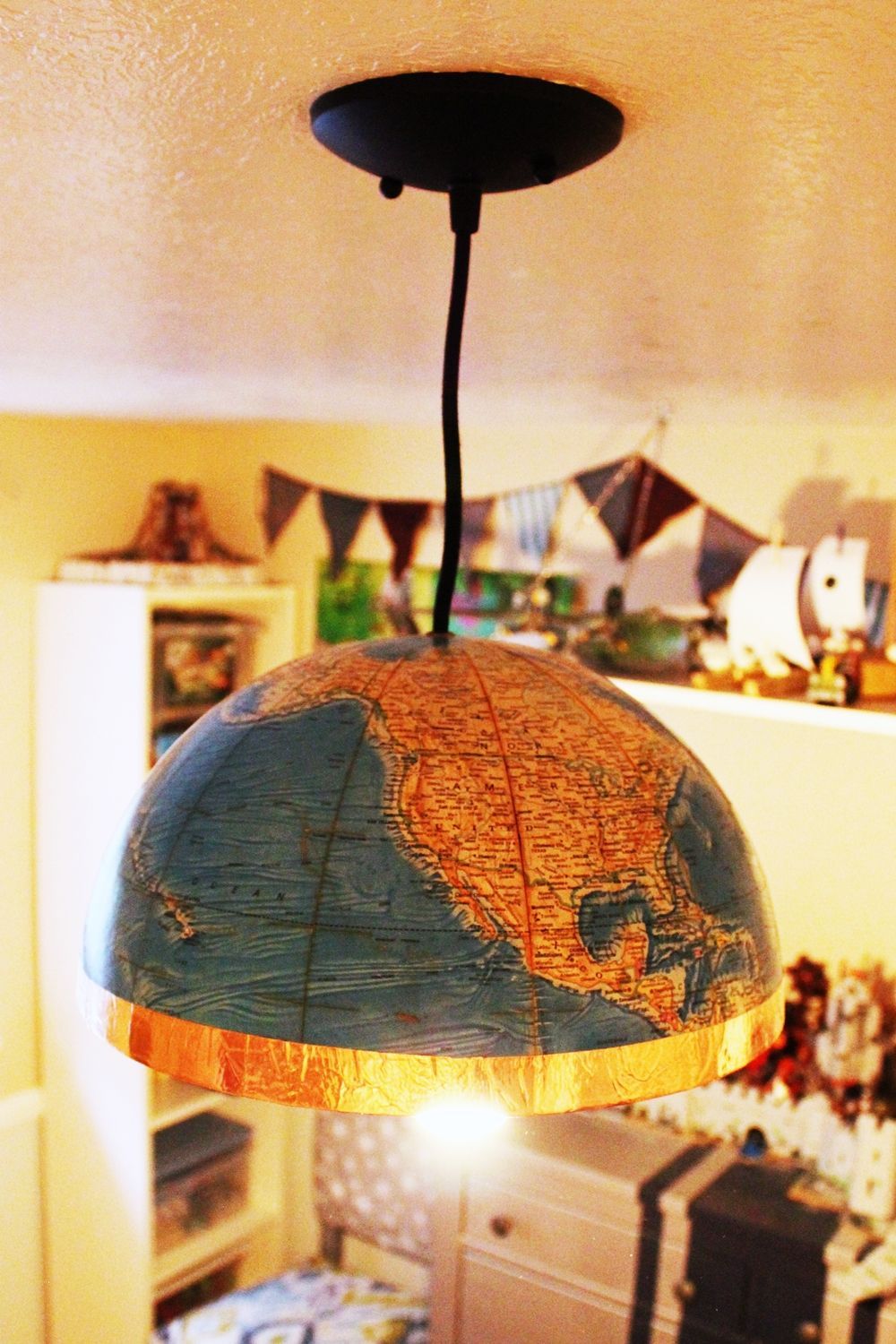 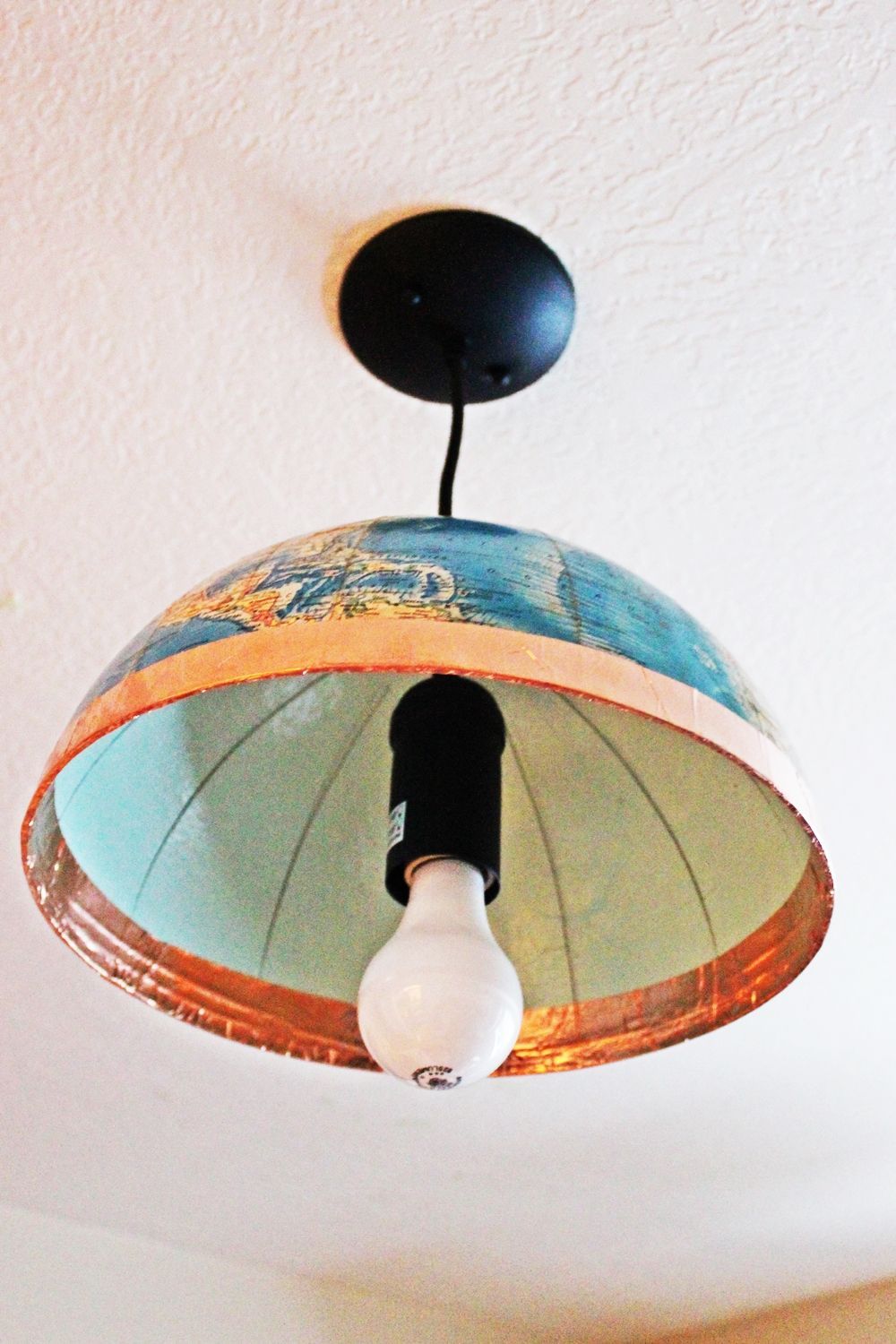 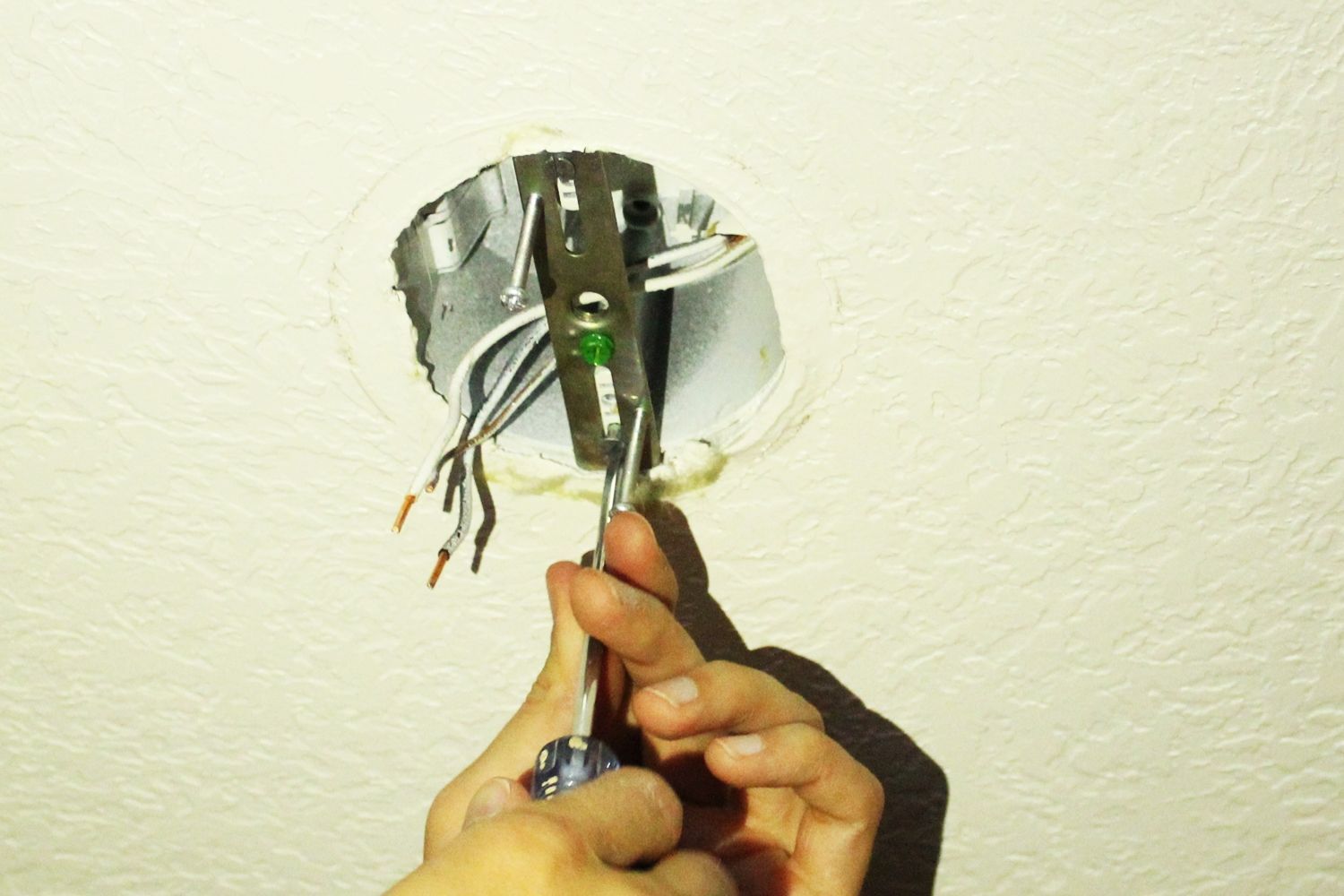 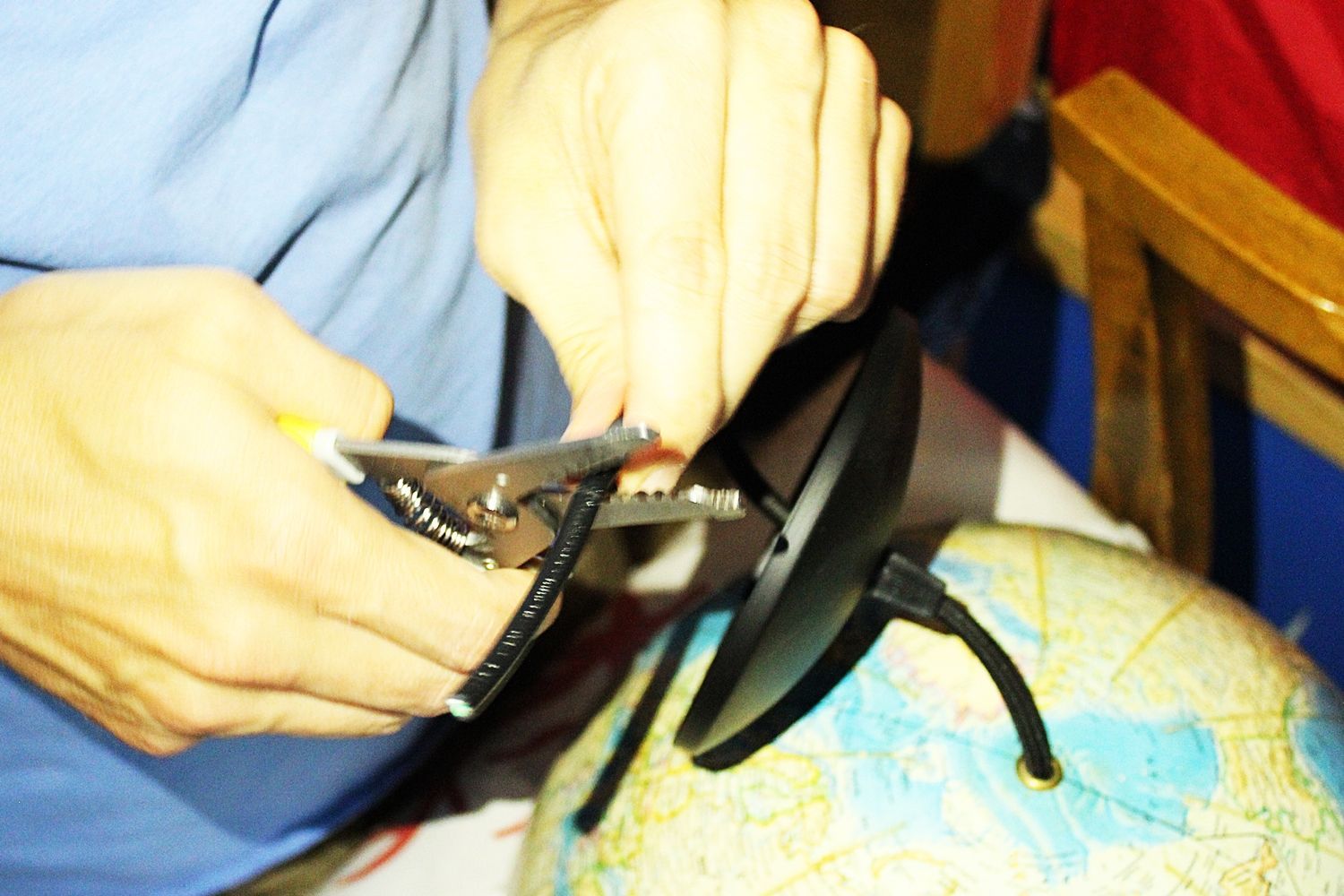 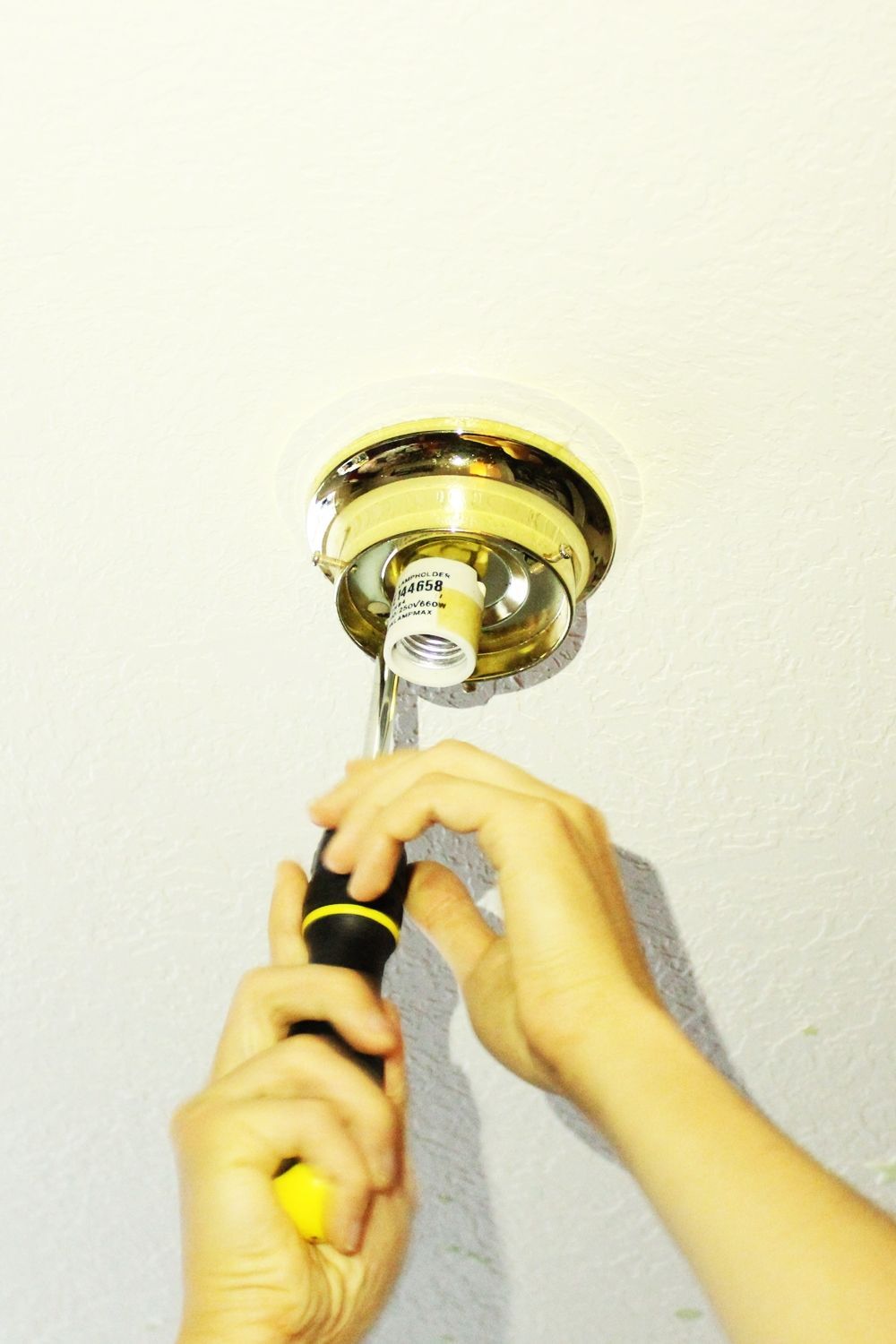 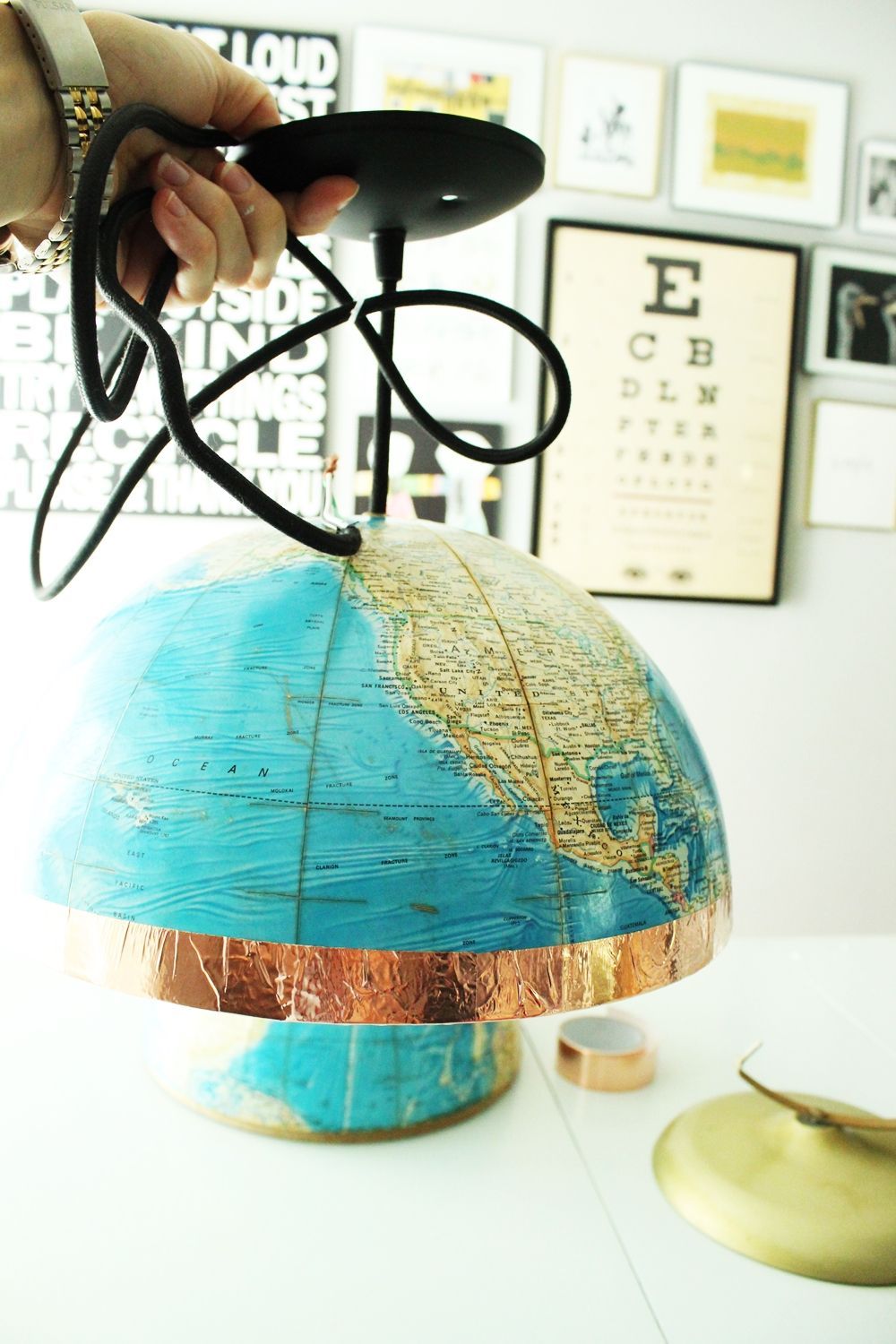 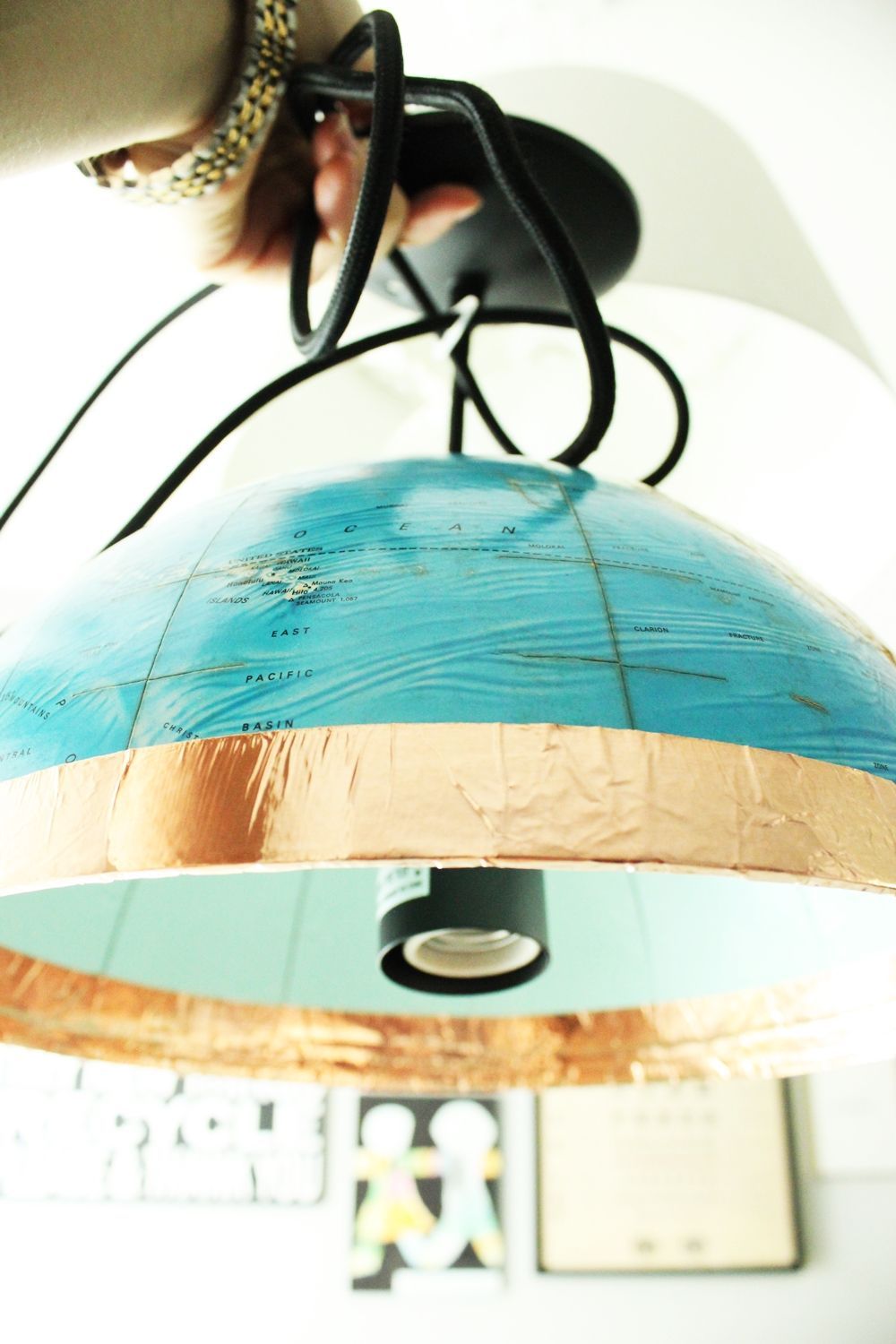 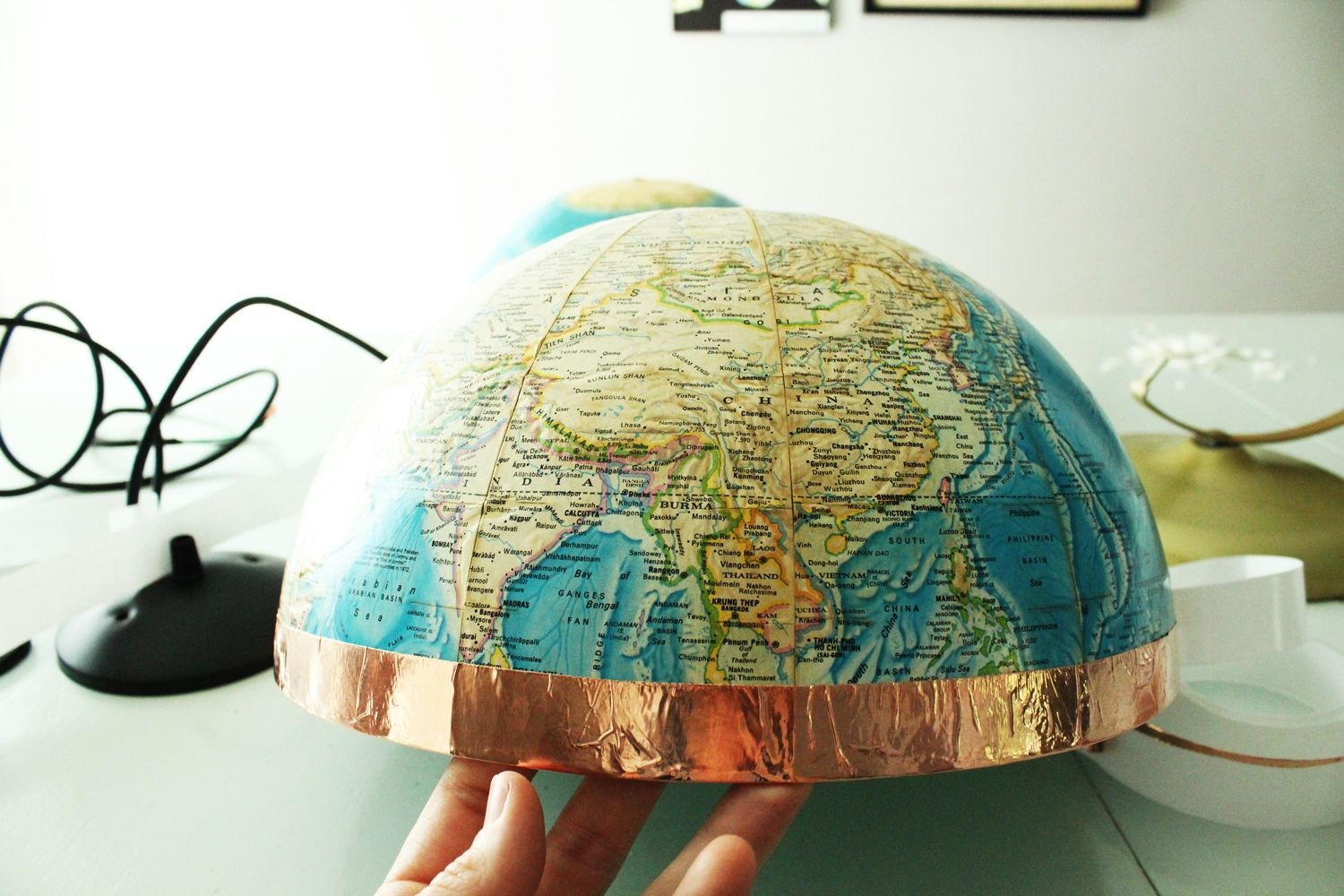 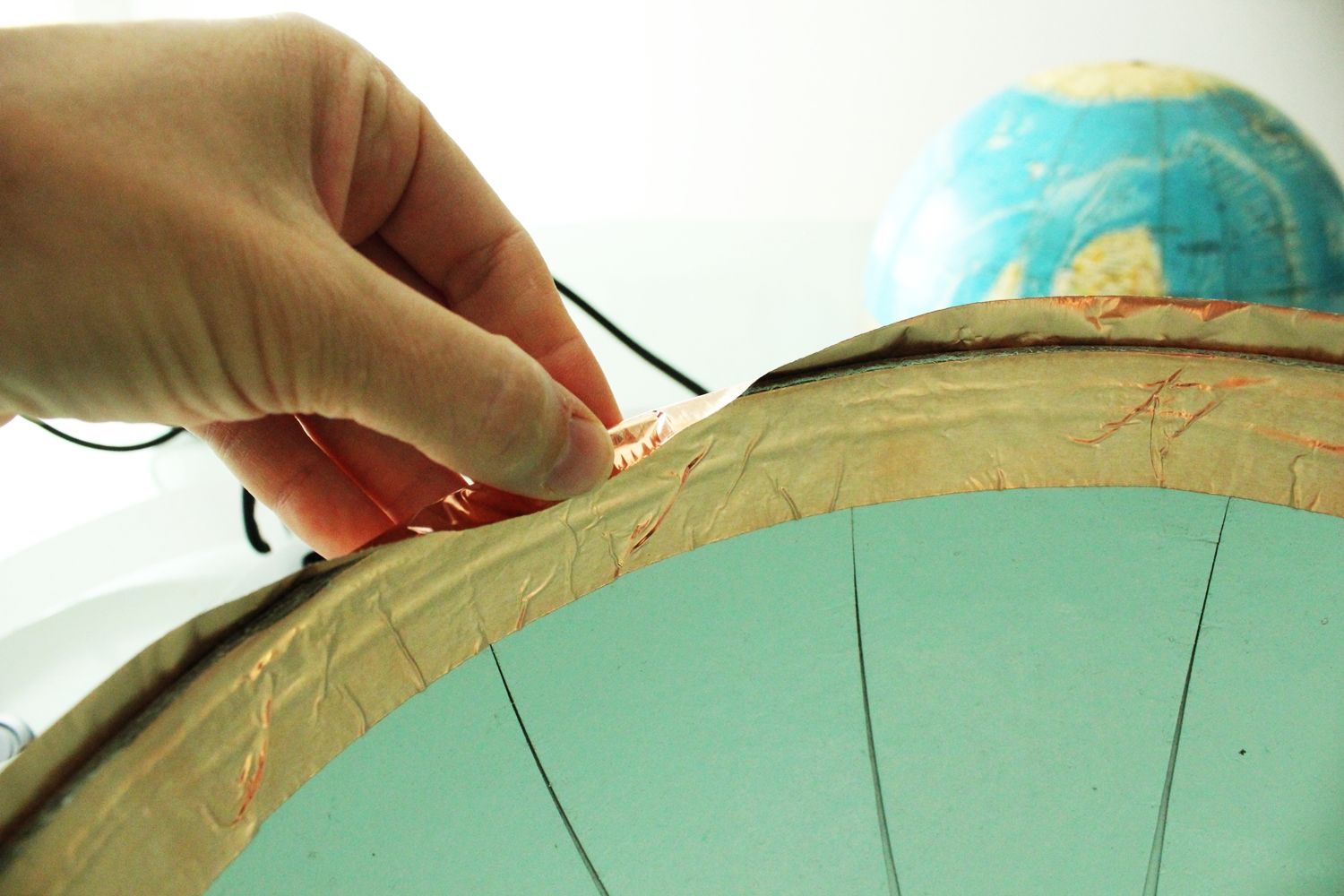 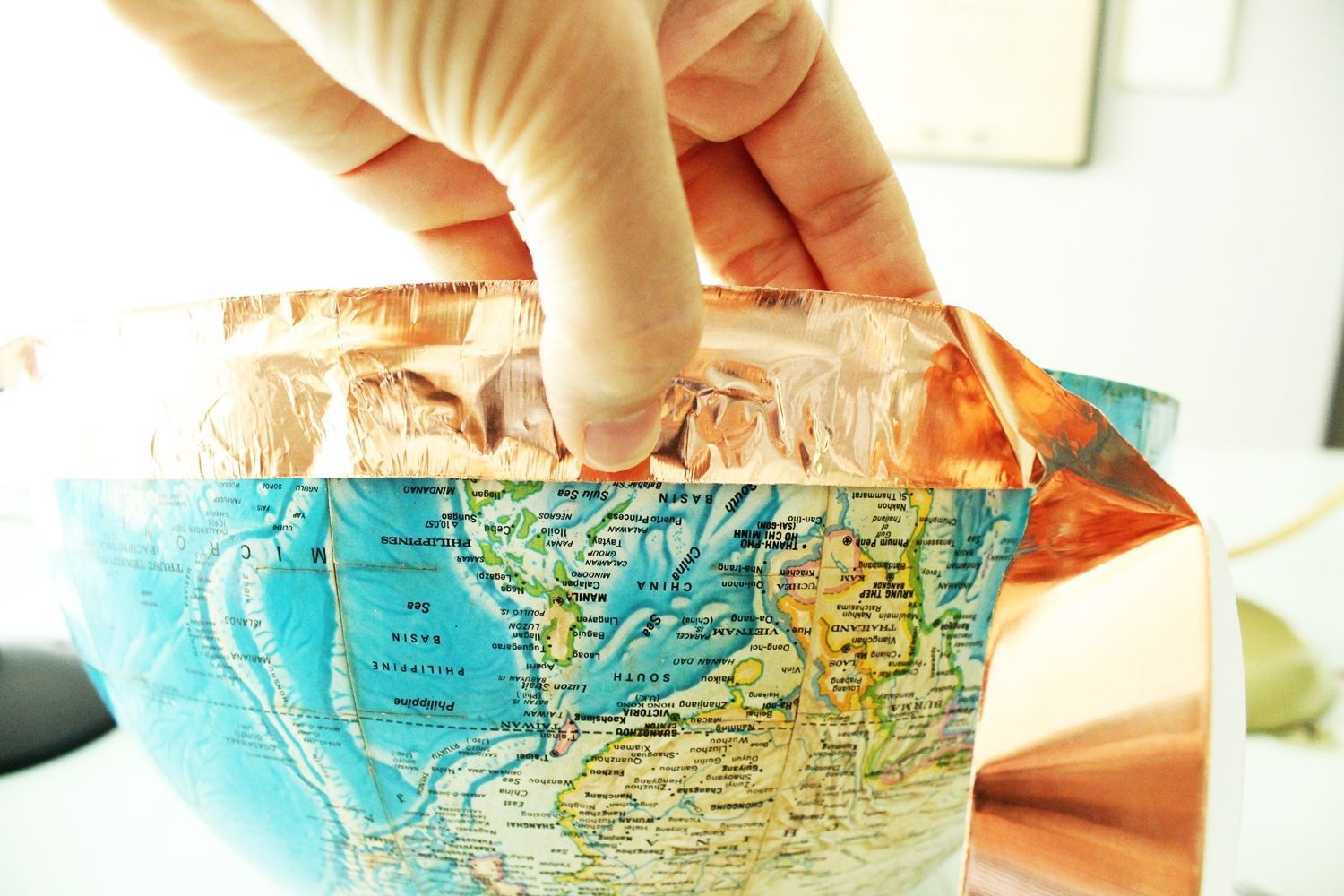 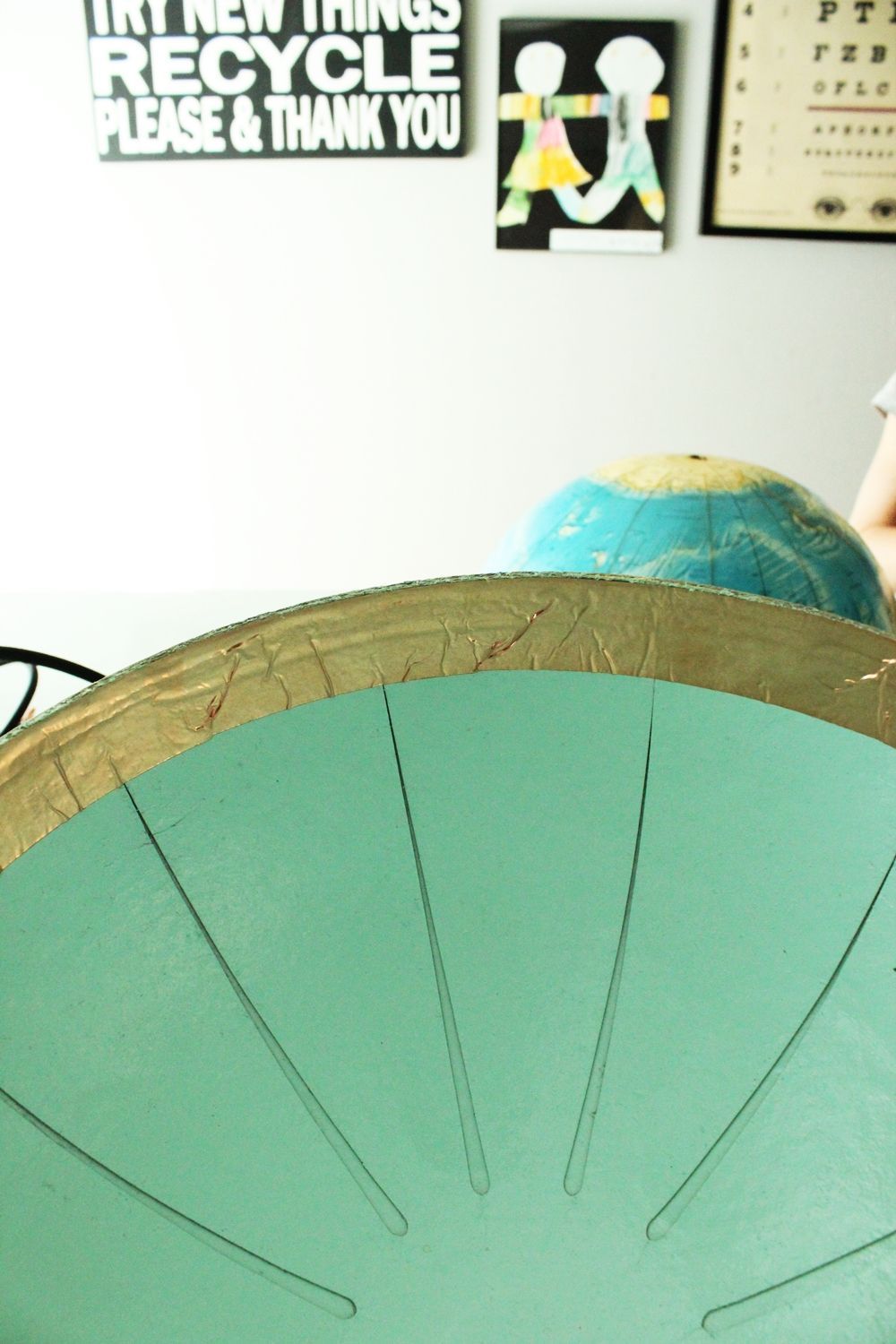 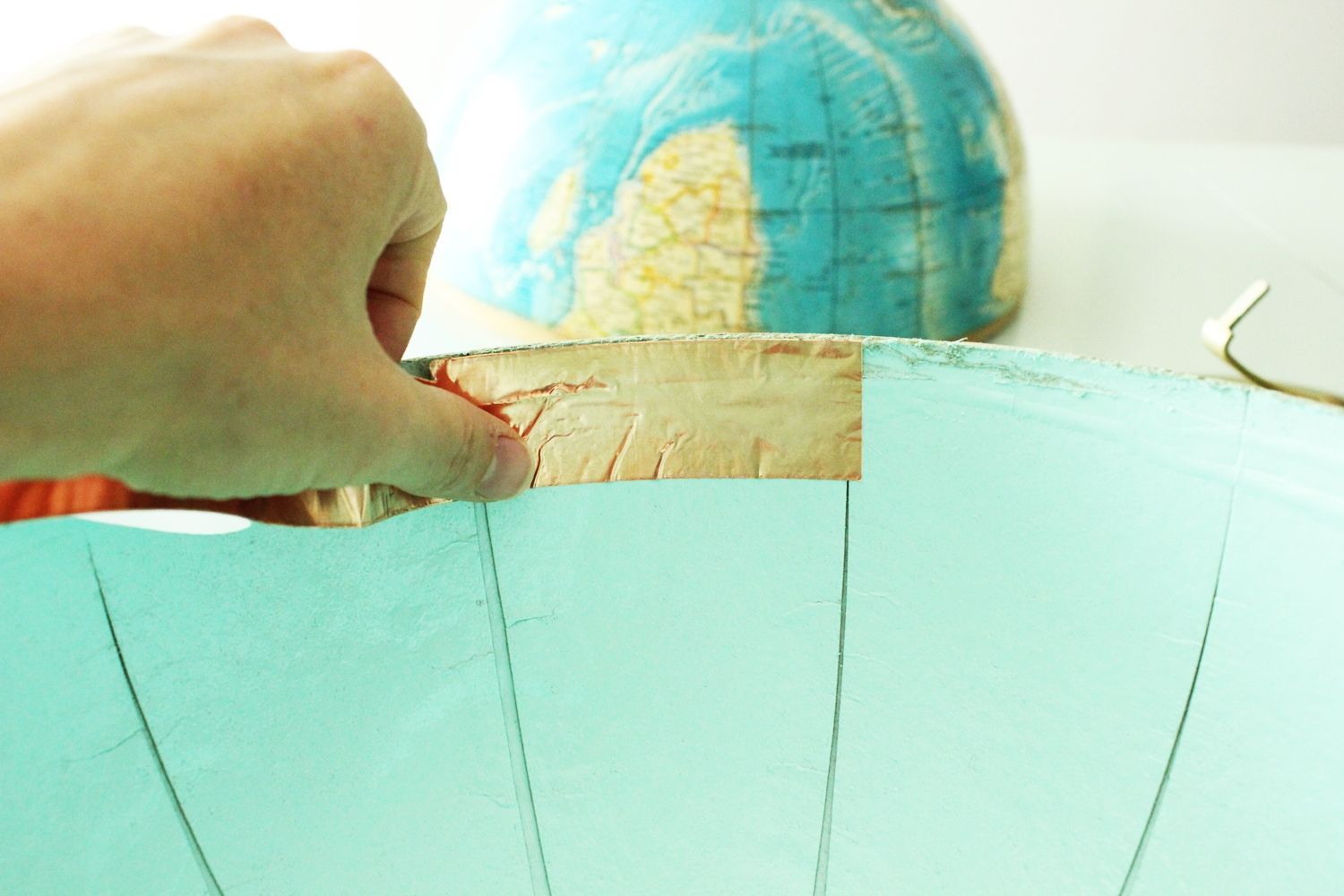 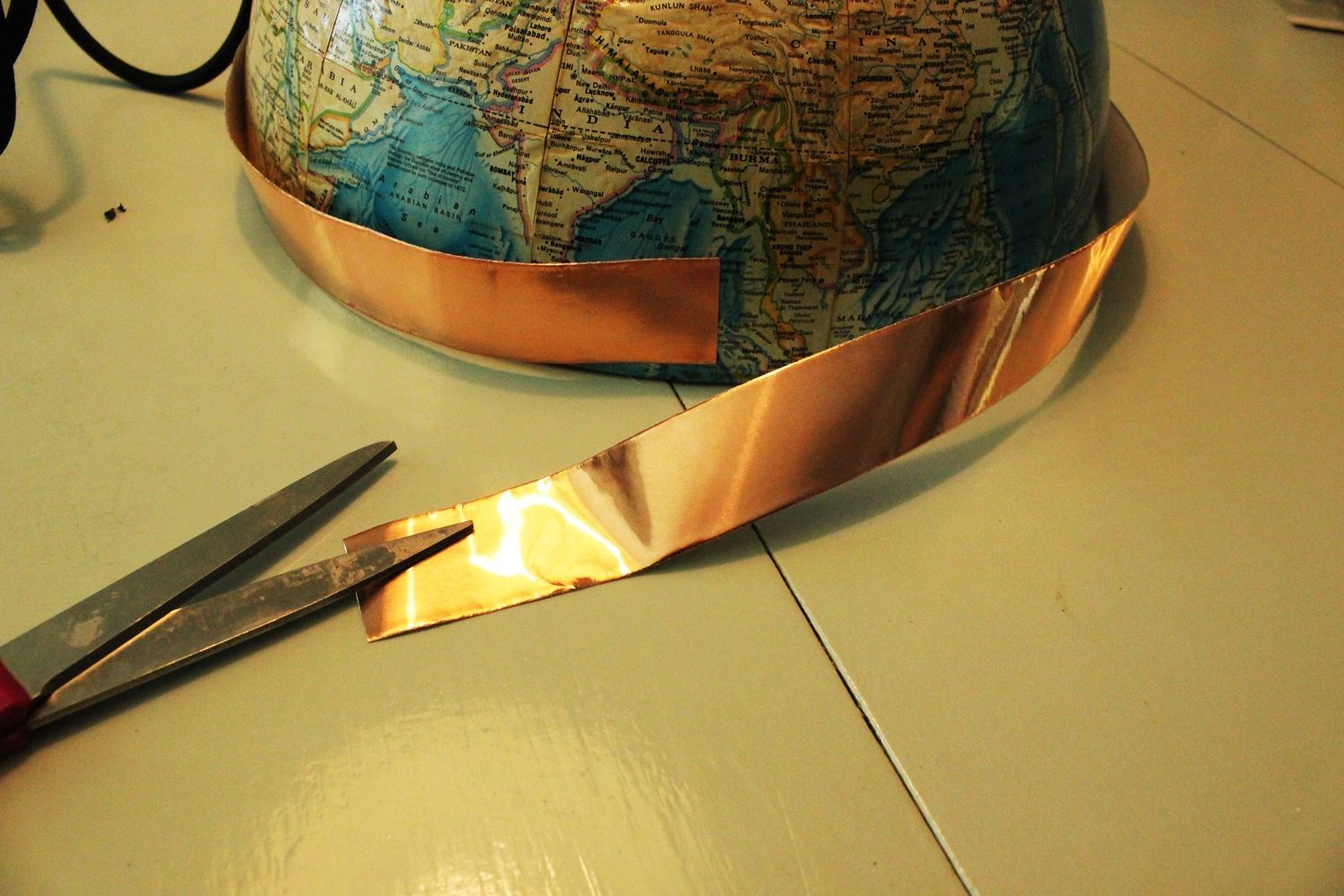 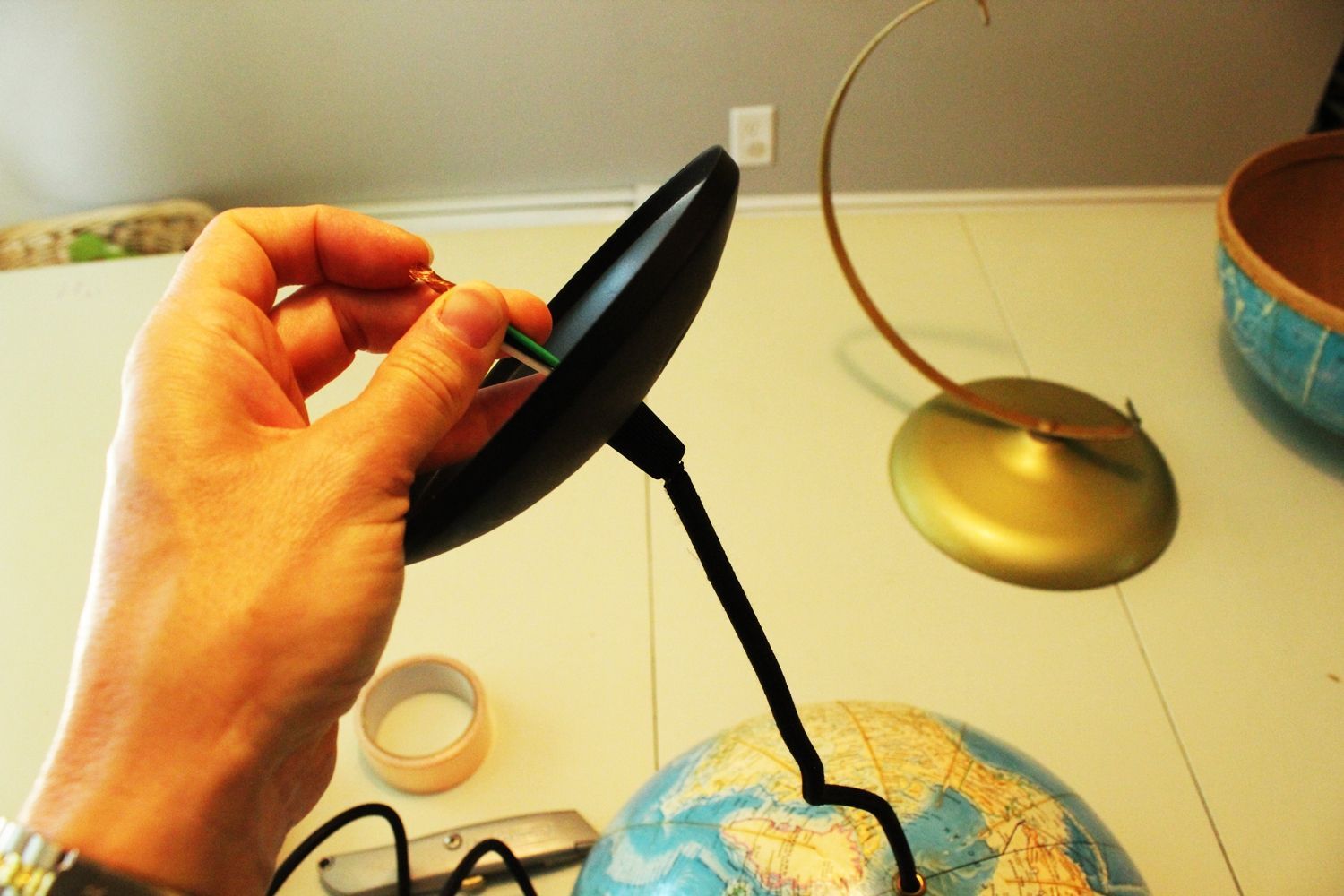 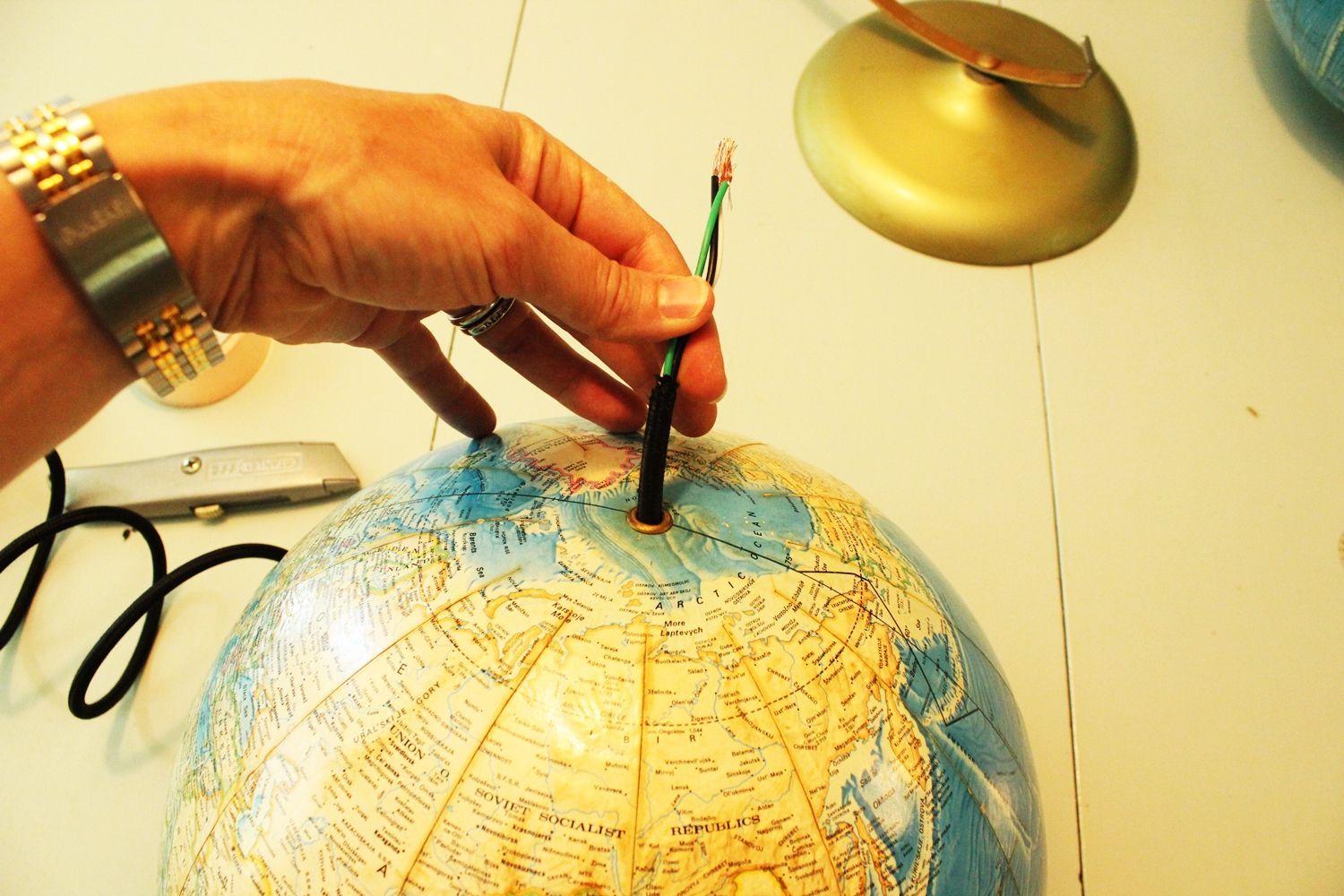 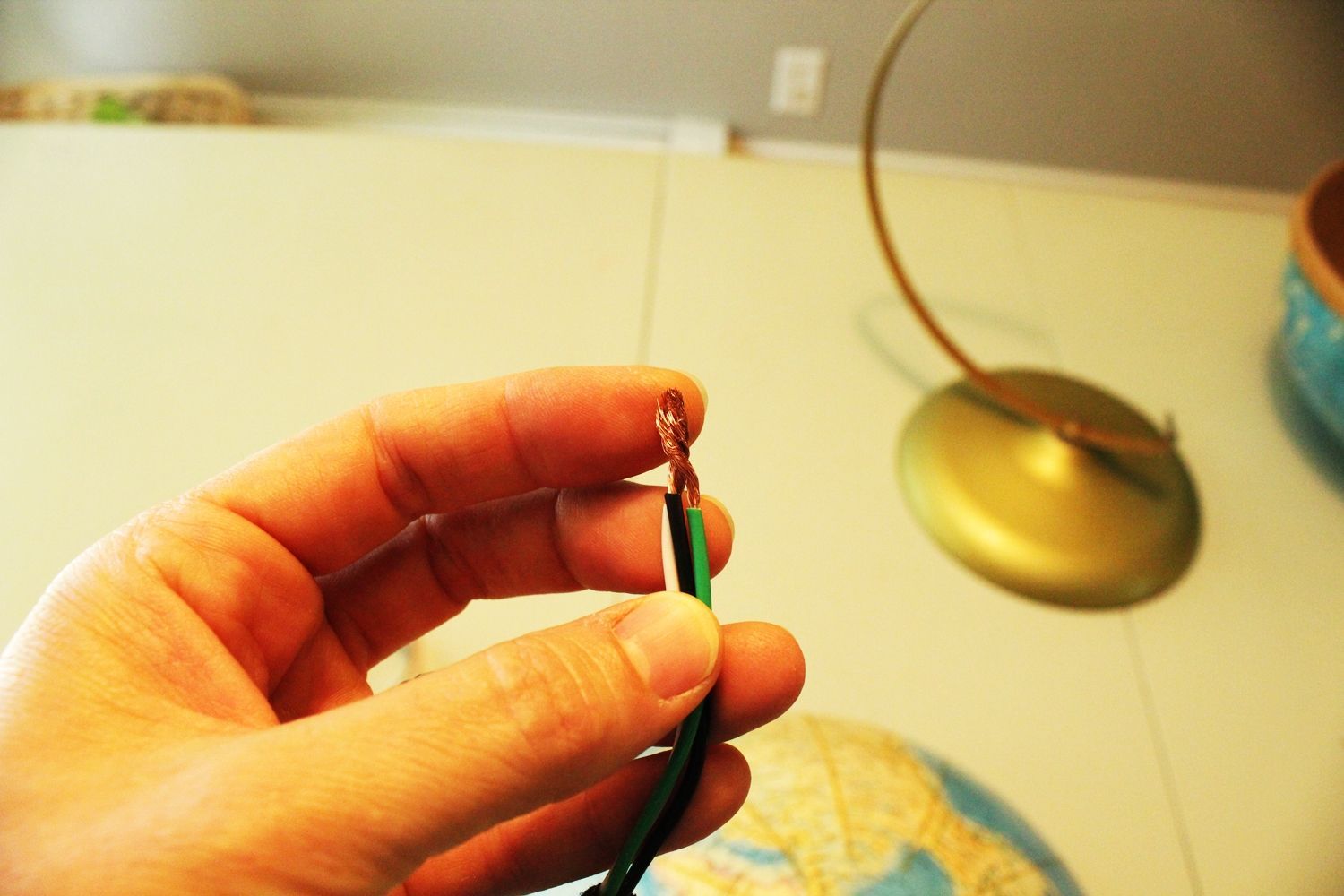 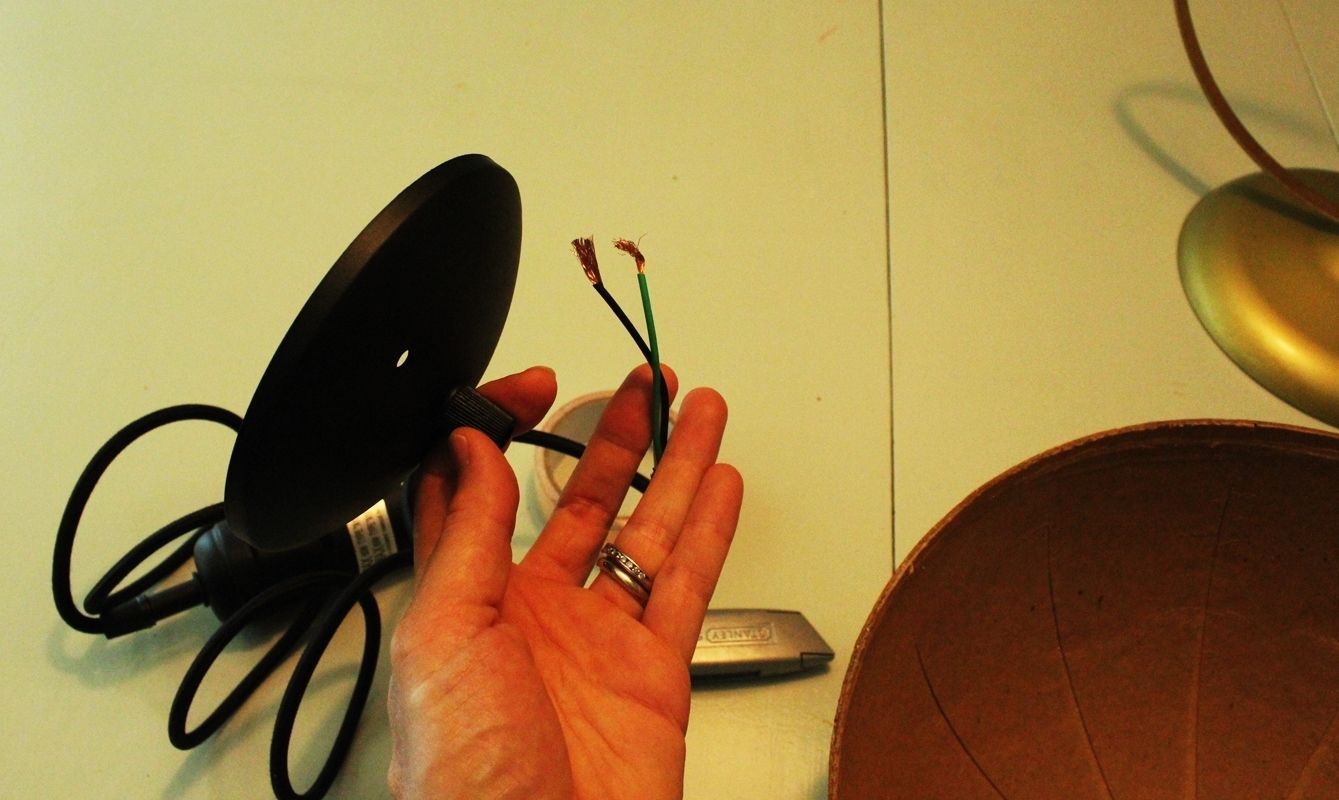 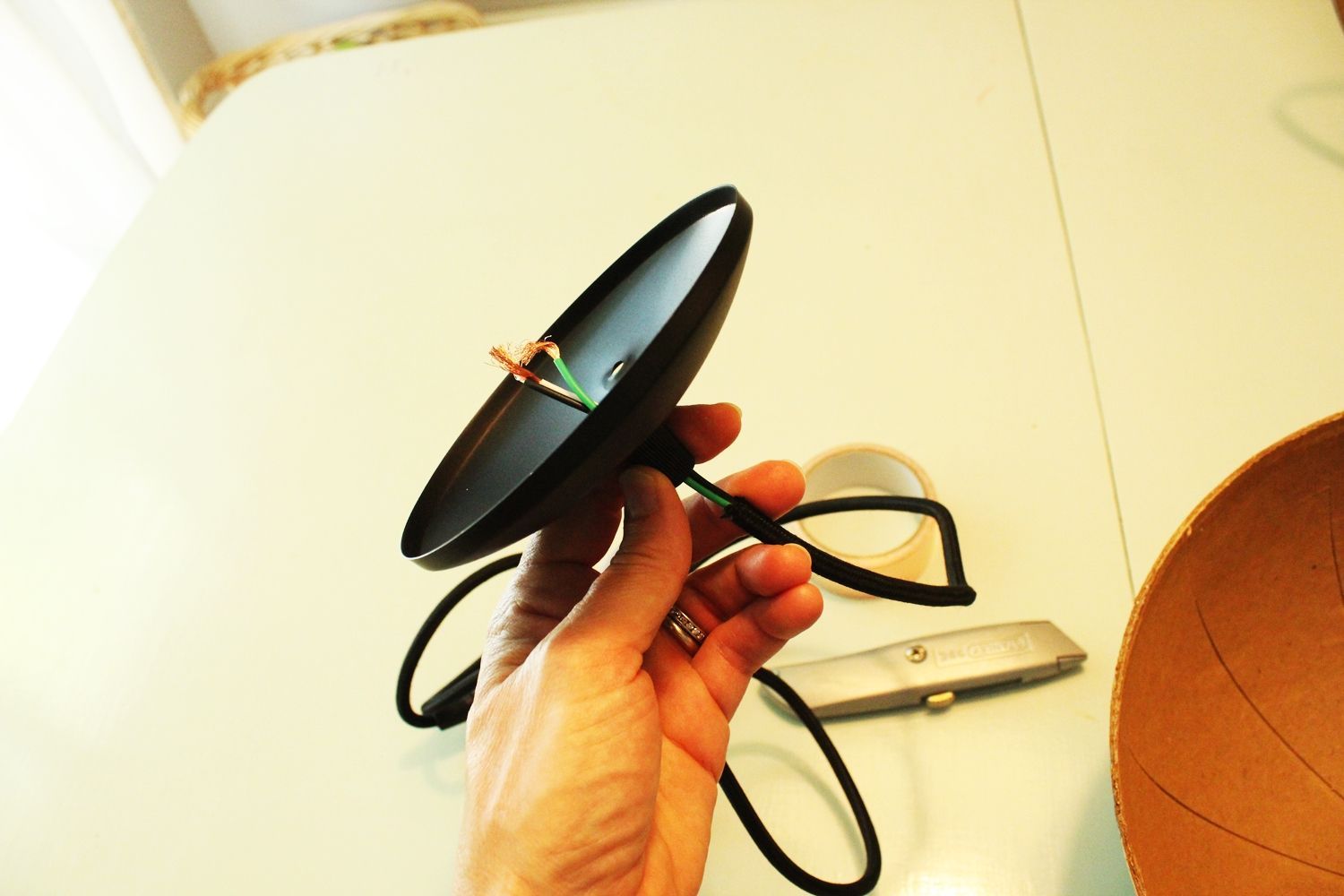 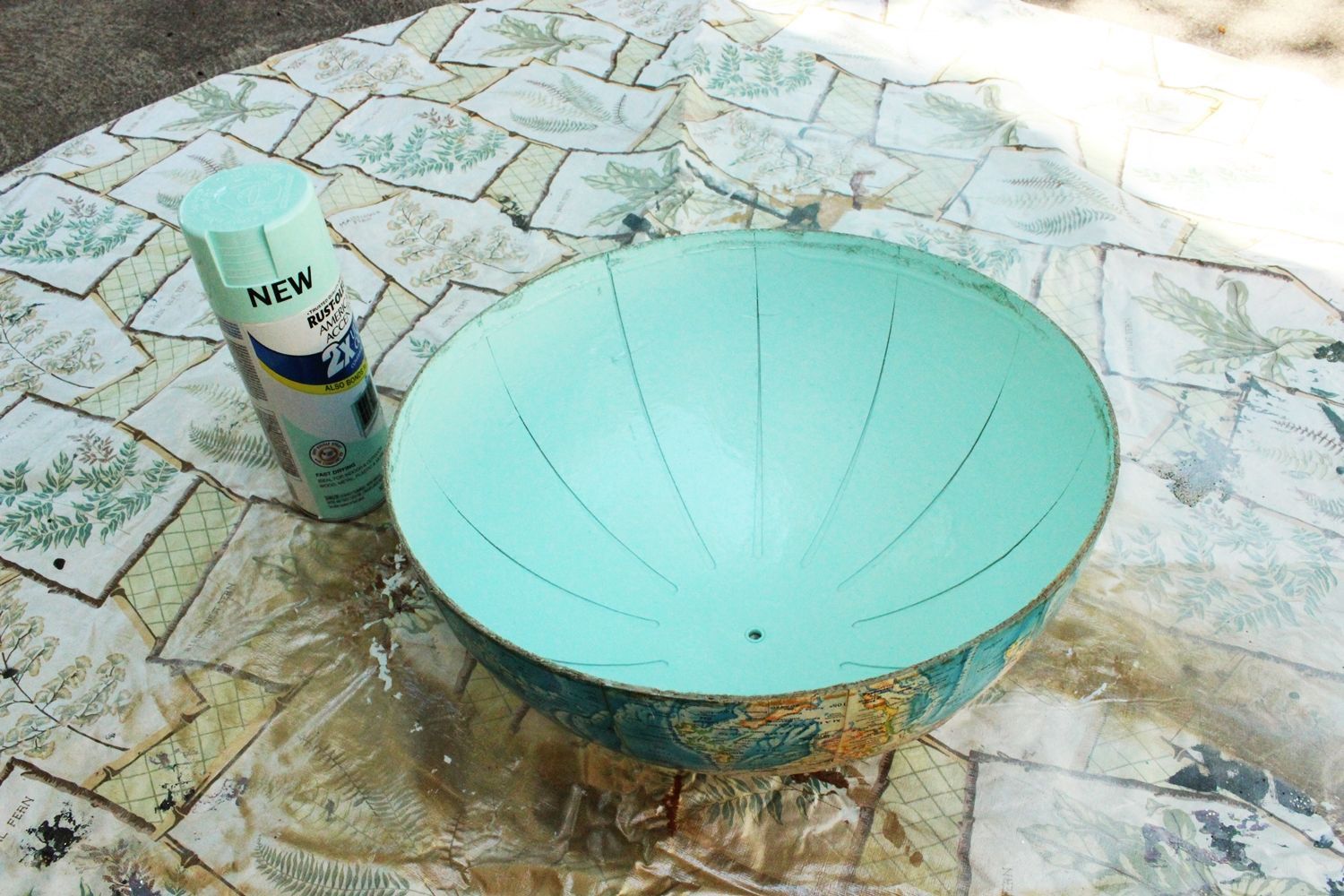 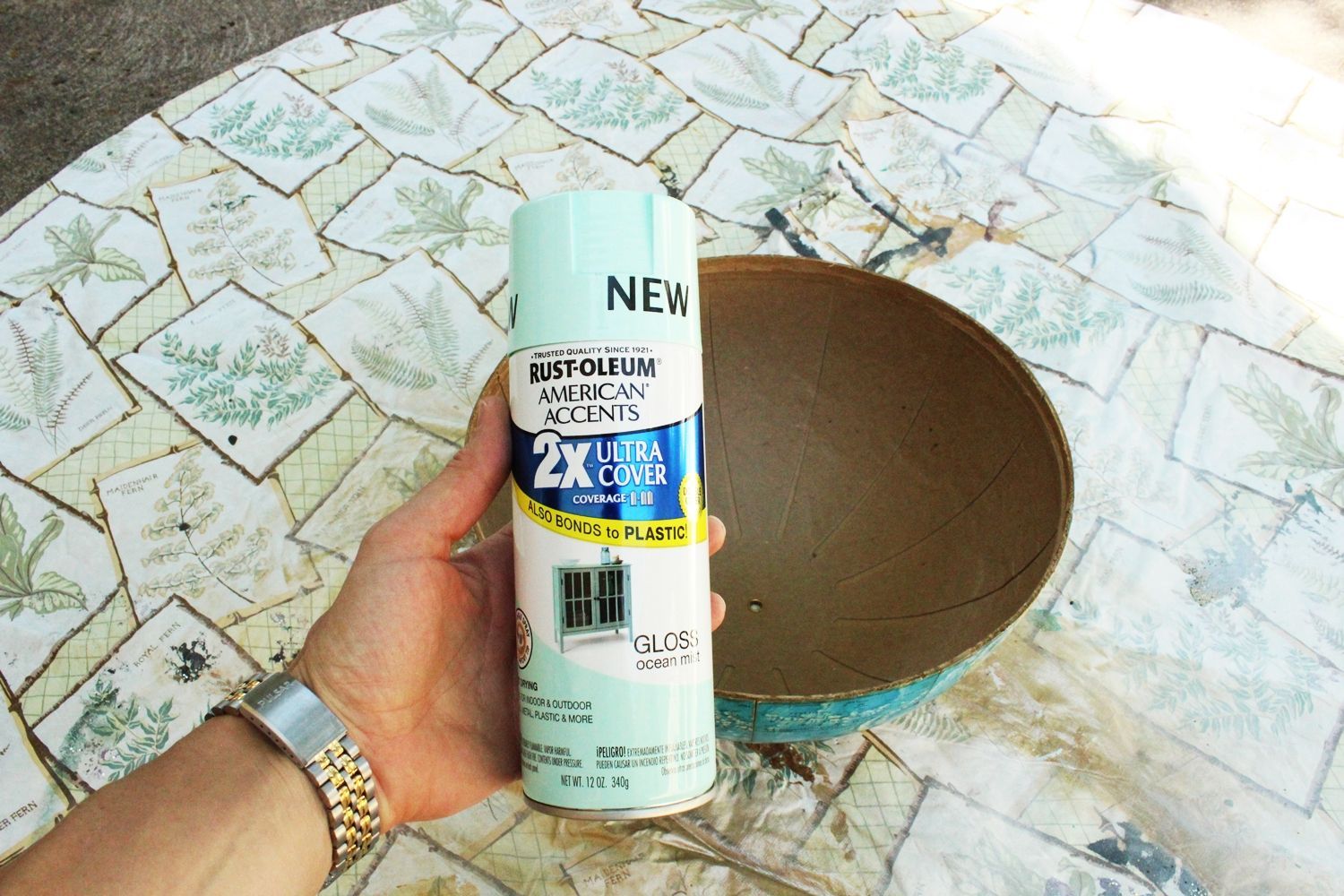 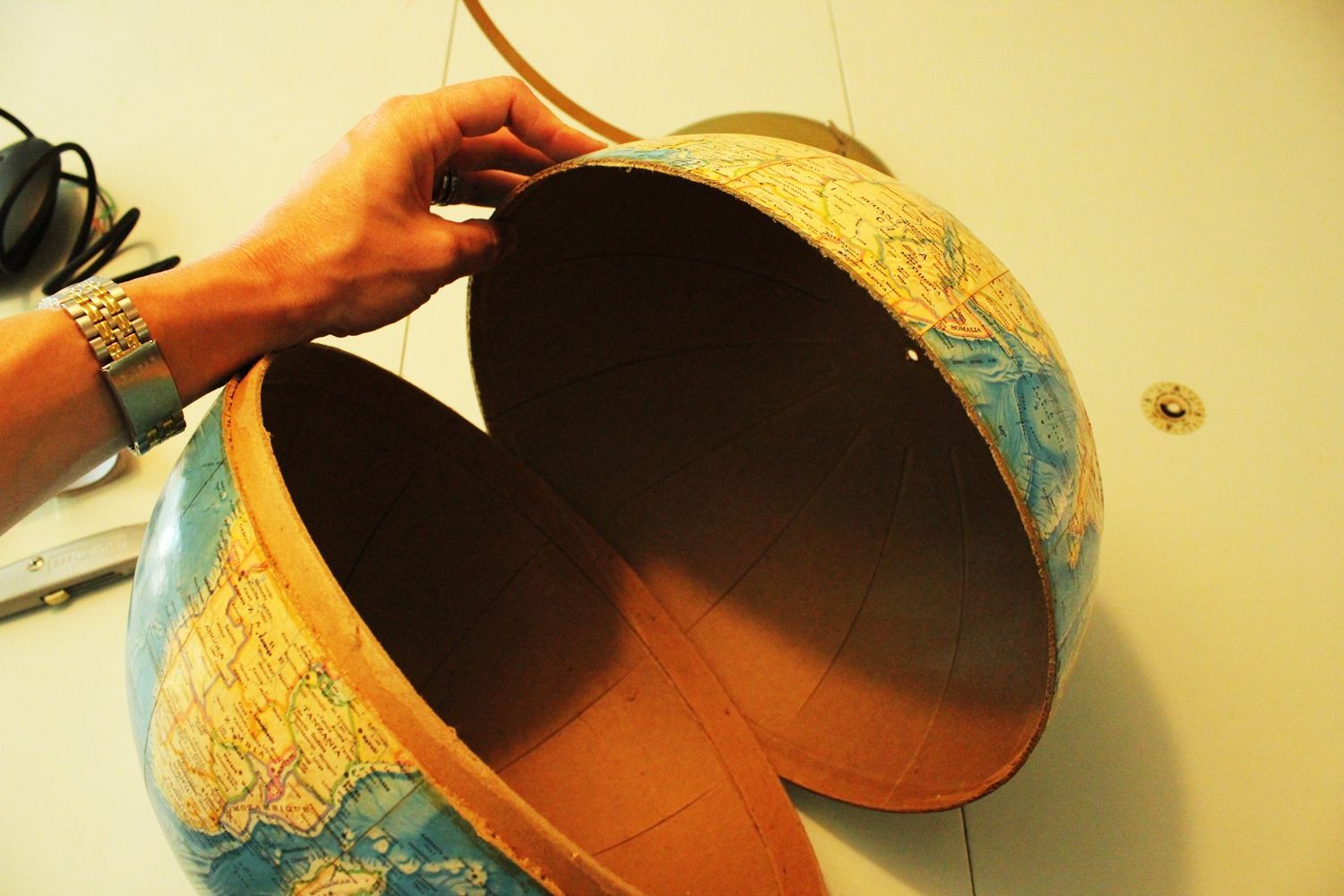 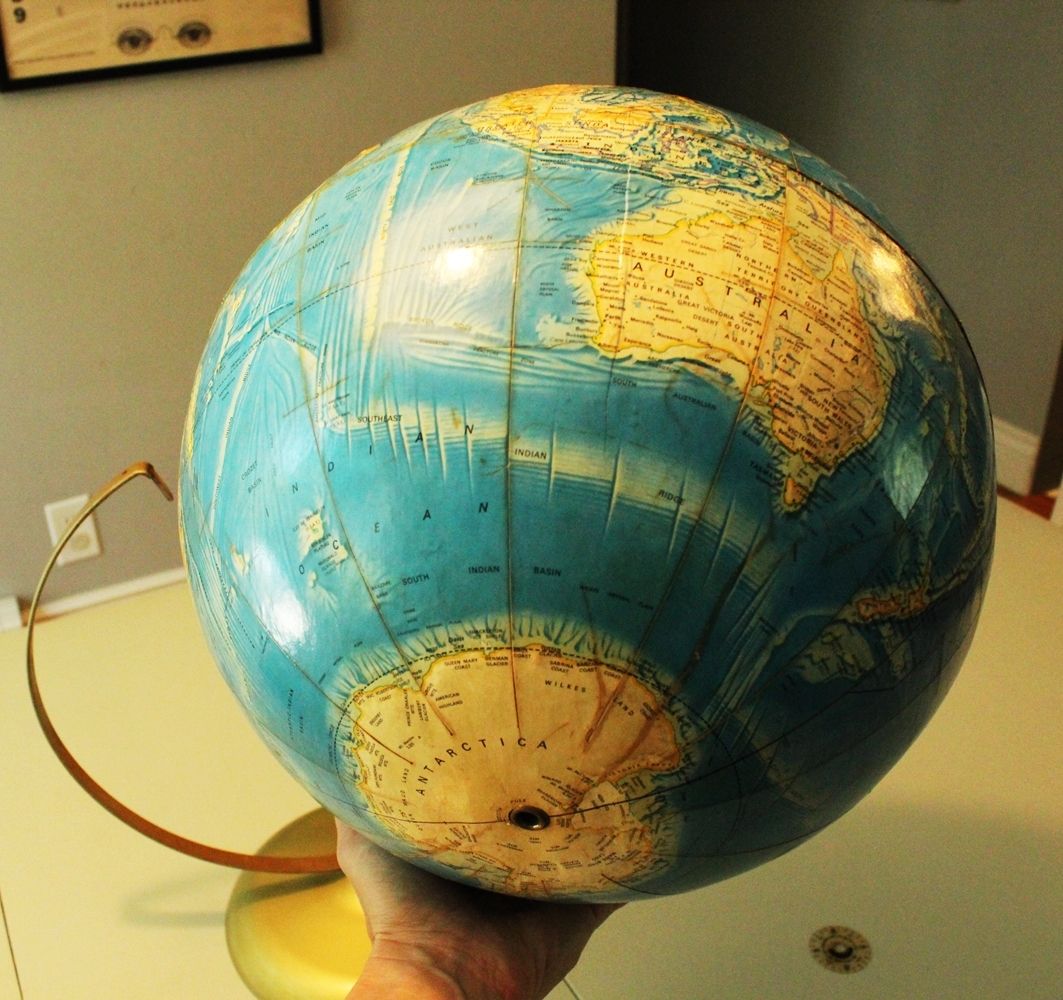 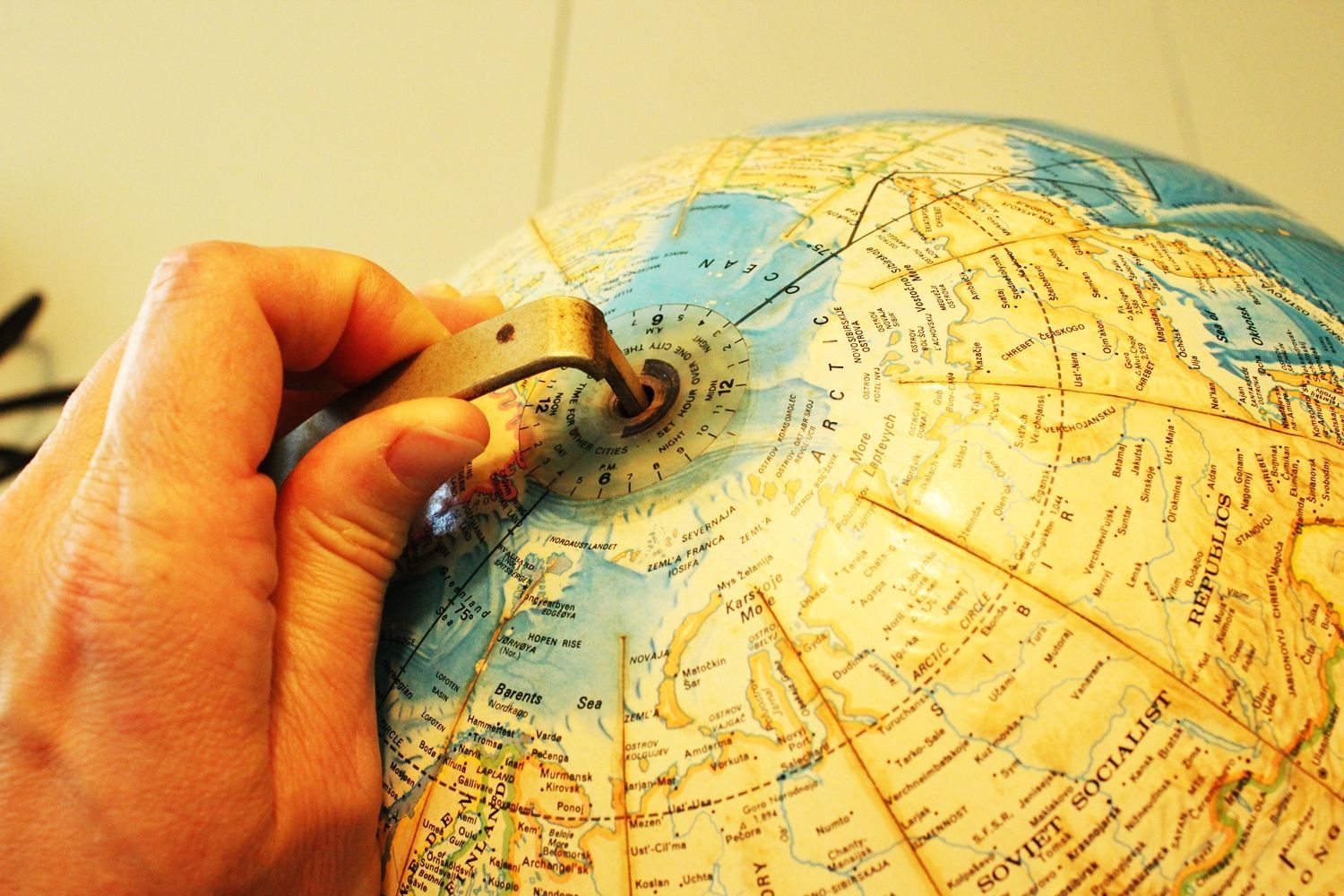 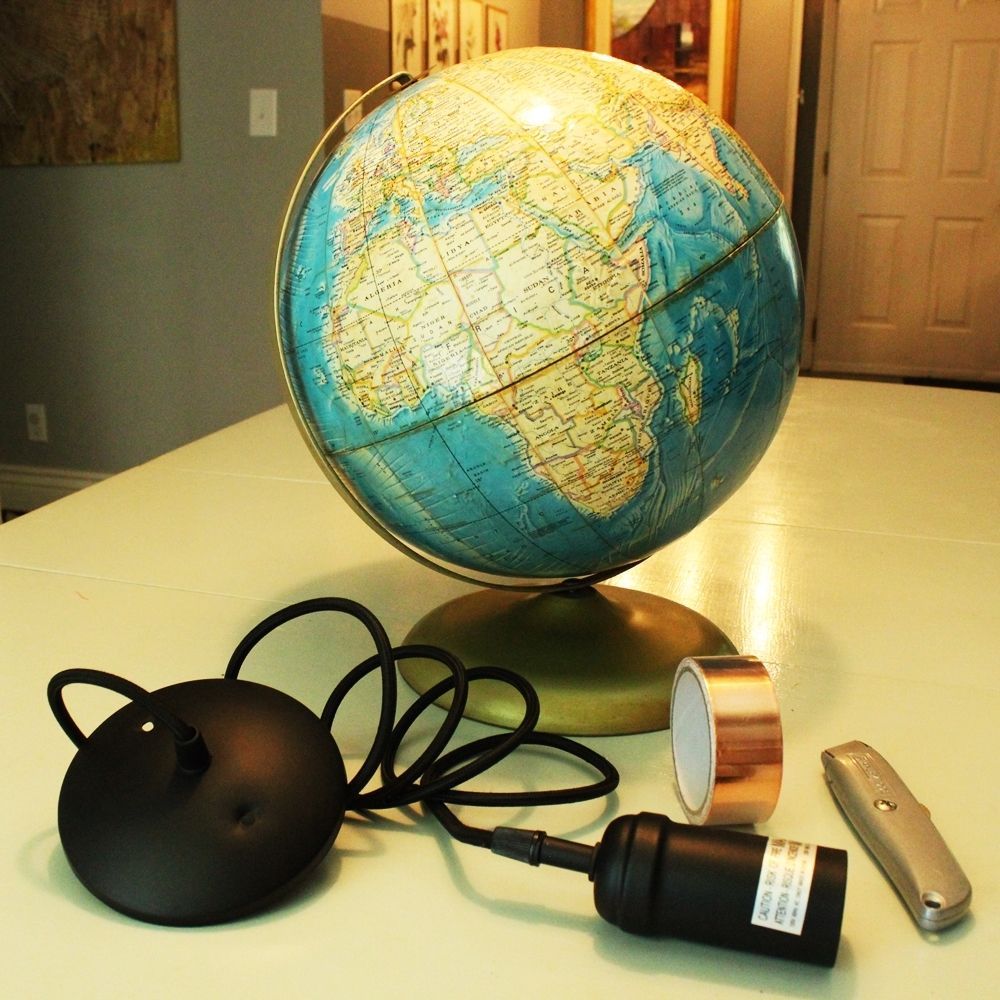 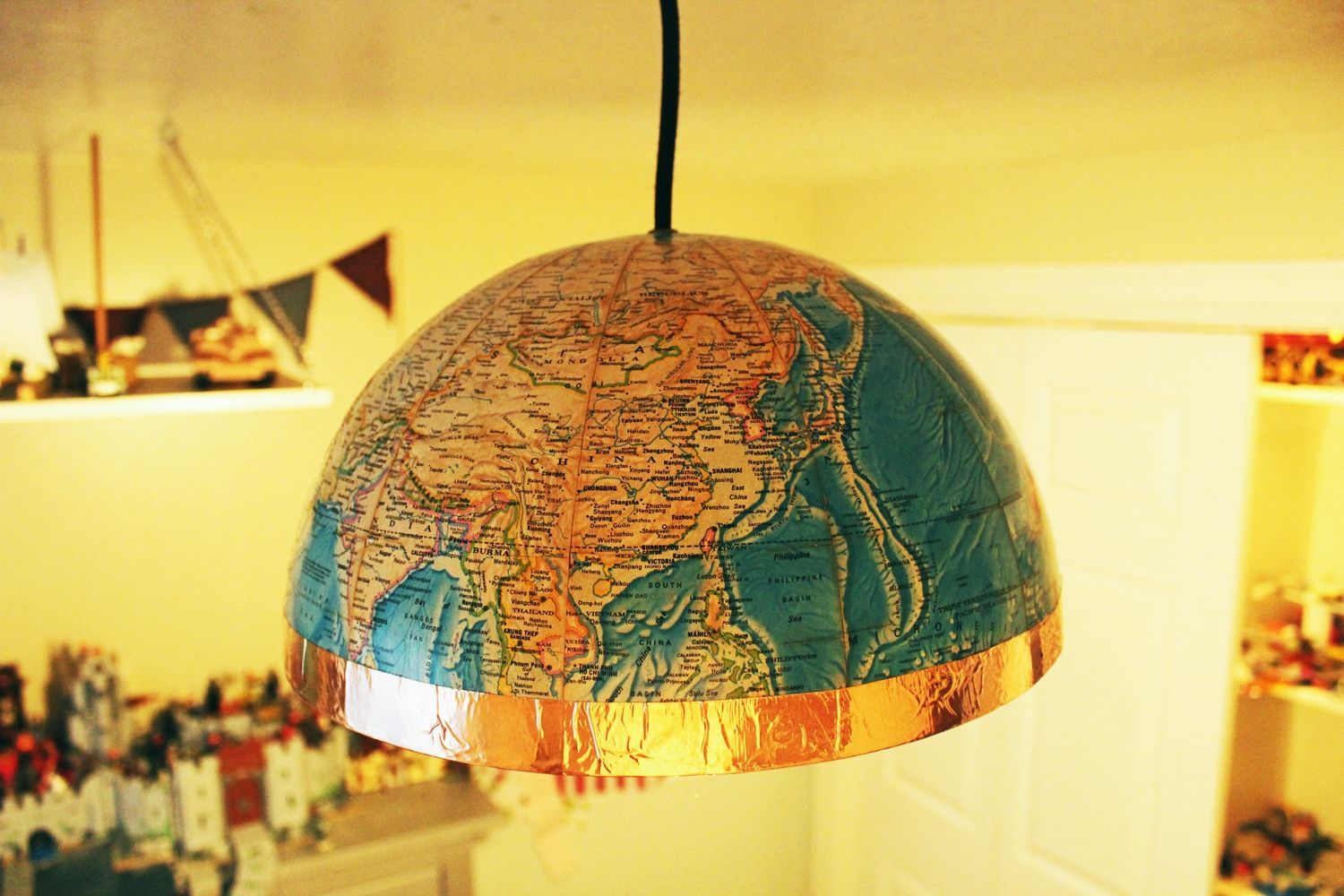 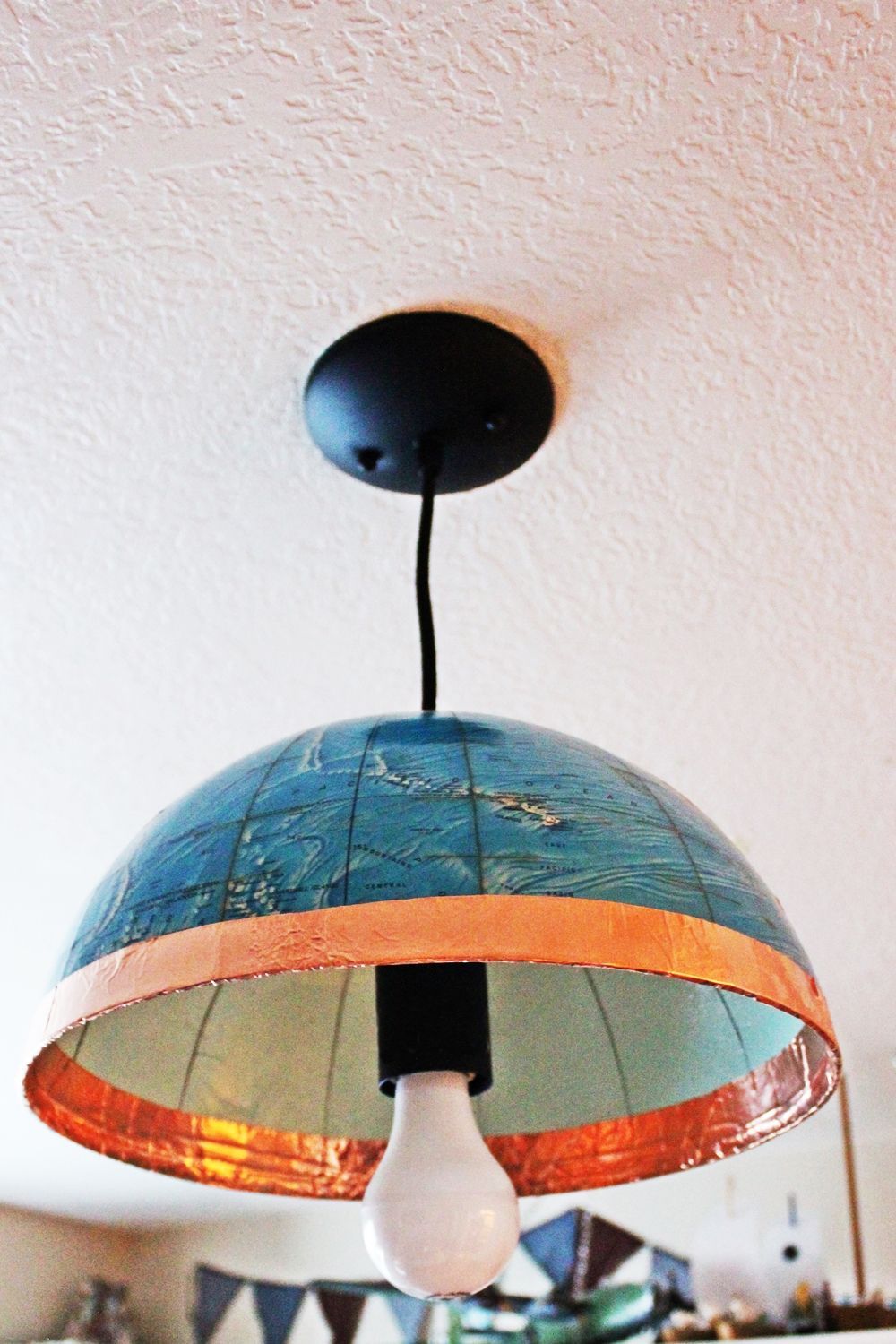 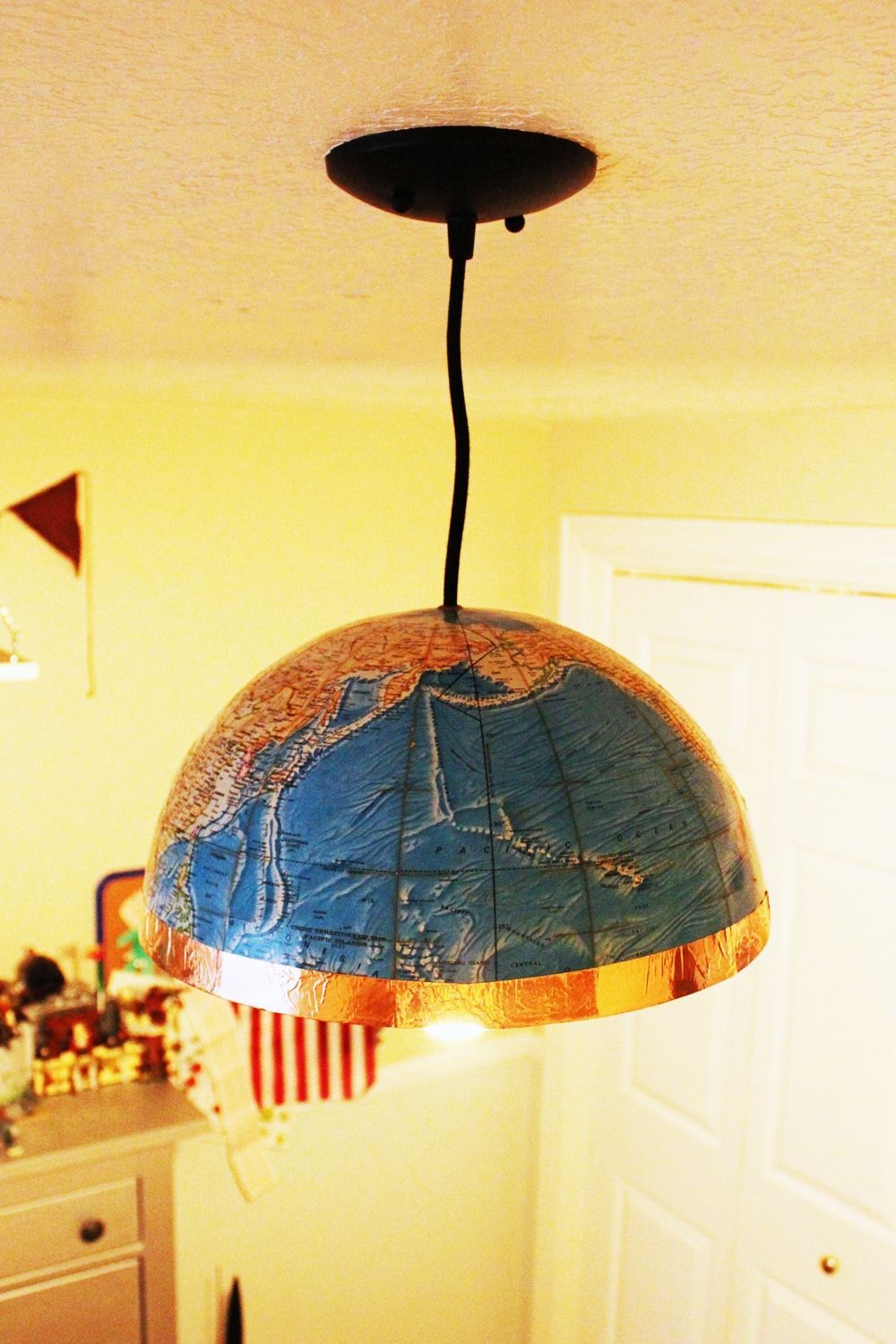 There’s something magical about globes, don’t you think? The whole world represented in one sphere that fits on your shelf or in your hand. Amazing. What’s not so amazing, though, is when a globe enters into Old Age-hood – it shows watermarks or other unsightly stains, it begins to fade in odd places, it may even have a dent or two. Because it may be hard for some people to toss a beloved piece, this tutorial provides a way for you to breathe life into that sad old globe again and make it shine. Literally. Here’s a quick and easy way to create your own globe pendant light, a thoroughly modern twist on a classic piece.

DIY Level: Beginner to create the pendant light, Intermediate to install it

Begin by carefully removing your old globe from its stand.

With the globe free of its stand, carefully look to see which half (top or bottom, or in this case north or south) is in the best condition. Or just use the north, if it would bother you to have half the world hanging upside down from your ceiling.

Carefully open your globe along the equator. Use the razor blade here if necessary. This example’s globe was so old that it kind of popped open itself.

Take your usable globe half outside, or to a well ventilated area, with a can of spray paint. You’ll be painting the inside of the globe because it will be visible as a lighting fixture.

Taking care not to spray any of the globe’s outside map, spray several light coats of your spray paint on the inside. Let it dry thoroughly.

Take your pendant light kit and pull the wires to the edge of the ceiling medallion attachment.

Pull the wires completely free from the ceiling medallion. Set the medallion to the side for a minute.

Gently twist all the wires together at the end. This will serve as a kind of needle to get the wires through your globe.

After double-checking to make sure your spray paint is thoroughly dry (it will paint the pendant light cord in streaks if it’s not dry), pull the wires up through the top globe half.

Keeping the wire ends twisted together in a needle formation, pull them up through the ceiling medallion again.

Measure an amount of copper tape that goes all around the globe’s equator, plus a few inches. (This example uses copper tape that is 1” thick and is actually marketed as a slug and snail deterrent for gardens.) Cut the tape.

Wrap the tape, keeping one side aligned with the edge of the globe, all the way around. Run your fingers over the tape to smooth it out as best as possible.

Taking another piece of copper tape cut to the same length (which is the circumference of the equator plus a few inches), begin taping it to the outside of the globe. The width visible is to your liking – make it as narrow or as wide as you want, but be sure to leave enough tape width to be able to wrap over the equator to the inside of the globe.

Fold the tape over the equator edge, smoothing bumps as you go.

There’s your polished off globe edge.

Flip the electrical off on the area you’ll be installing your new globe pendant light. Double check that it’s dead. And now you’re ready for install.

Start by flipping the electrical breaker off, then, once you’ve ensured that the power is dead, remove your old light fixture.

Hold the pendant lamp up to the ceiling and determine how low you want it to hang in your space. Cut the wires about 6” longer than this. Strip the casings off the wires.

Install the pendant light as per instructions on your lighting package. Basically, you’ll match black with black, white with white, and green with the ground wire. Twist wire nuts onto each pairing, then use electrical tape to insulate it.

Screw in your lightbulb and flip the electrical breaker switch back on.

Turn on your new globe light! We love that rim of copper tape around the equator – it gives this old globe a finished, polished look.

This is such a versatile DIY lighting fixture. It’s great for a study, an office, a bedroom, or any other room, really.

We hope you enjoy repurposing that old globe into something beautiful, useful, and illuminating!