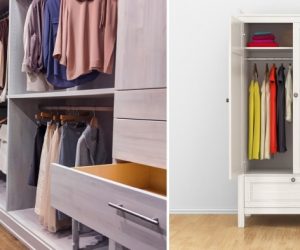 In this digital age, it can be a challenge to help an older home keep up with our ever-increasing technological needs. For example, do you have more devices that need charging than you have available outlets in convenient, accessible locations? We had just a 1-gang (two outlets) electrical setup in a prime spot in our kitchen, which just wasn’t enough when the blender, griddle, Bose speaker, iPad, and phone all needed electricity simultaneously. It became apparent that we needed to update our electrical situation, stat.

*Note: The author is an experienced, but not professional, home improvement enthusiast. Neither the author nor Homedit is responsible for any potential damages or harm caused during the process of following this tutorial.

Identify the outlet needing to be expanded and/or upgraded to a USB charger outlet. Flip the breaker to this outlet and double check that there is no electricity running to this outlet. Remove the face plate.

Remove the outlet (and any spacers) by unscrewing the top and bottom outlet screws.

Gently pull the outlet away from the blue electrical box and unscrew the wires from the outlet.

Next we’ll be removing the blue electrical box and installing a 2-gang box. If your drywall is already removed (check out this tutorial for removing drywall), the next few steps will be fairly easy to do. If your drywall is still intact, you’ll need to identify which side of your outlet has the stud. Then you will need to use a drywall saw to cut the drywall on the non-stud side of the outlet box to the width of your new blue double electrical box.

Using a flat screwdriver, loosen the nails attaching the blue box to the stud. These are generally found at an angle on the top and bottom of the blue box.

Pull out nails, then remove the blue box. Unhook wires from the box as you pull it out.

The wires will stay in the wall. (I’m stating the obvious, just in case.)

Grab your new 2-gang blue box. A couple of things about what you want to make sure of: (1) Your box can be front-nailed to the stud. This prevents damage to existing insulation. An exception to this recommendation is if your drywall is not already removed during this process; if that is the case, you might want to use a standard electrical box and deal with the insulation damage rather than mess with having to remove bits of drywall then replace them. (2) Your box is extra deep. We recommend a 38 cubic inch box (many 2-gang boxes are smaller, like around 34 cubic inches). You need that extra depth because the USB outlet is deeper than standard outlets.

Hold the box up to the stud over the old box’s hole, and mark where you want to cut the insulation to.

Use a razor blade to cut through and remove the insulation.

Your box should fit snugly and cleanly into the opening.

Use a screwdriver and a hammer to remove the appropriate knockout (top or bottom, whichever direction your wires are coming from). You should only need to remove one knockout of the smallest size (1/2”).

Pull the wires through the knockout hole and insert your box next to the stud.

Mount your box to the adjacent stud with wood screws. Predrilling is optional, but I generally recommend predrilling just to be safe.

Slice the insulation to fit the box “wings.” Insulation should be flat and smooth around all edges after box is installed.

Using wire pliers, straighten the ends of the wires in the box.

You will now need to cut two (each) strips of 12-gauge wire in black and white, each about 4”-6” in length.

Remove the end casings on both ends of both black and both white wire strips, about 1/2″ to 3/4″ in from the ends.

The idea is that you will be doubling the number of outlets here, so you will need two black wires and two white wires (and two ground wires) to attach to the ends of the existing black and white and ground wires, respectively.

To rephrase, each wire nut (the black, the white, and the ground) will combine the ends of three wires so that two wires of each are available for the two outlets.

Use needlenose pliers to bend the ends of the wires into a small semi-circle.

These curved ends will hook onto the screws on your outlets.

Match the black wire with the outlet’s gold screws, the white with the silver, and the ground (bare copper wire) with the green.

Hook the ends of the wires under the appropriate screw head, then tighten it down carefully with a screwdriver.

Again, match the black wire with the gold screw, the white wire with silver, and the ground/copper bare wire with green.

Your outlets should be firmly attached and ready to install in the electrical box at this point.

Make sure the outlet “faces” are aligned in the direction you want, then push them into the box.

Make sure they are perfectly vertical and parallel, then screw the outlets in.

Install your tile or whatever else, if applicable, to the drywall. (Check out our tutorial on how to install a subway tile backsplash.) Then install the face plate.

Viola! You’ve done it. You just freed up some serious gadget-charging space.

This is the first, and probably last, time this iPhone will have the USB charger all to itself.

Enjoy your small-but-important technological upgrade to your home!

Check out other tutorials in our DIY Kitchen Upgrade Series:

How to Upgrade Your Kitchen Lighting

How to Remove Kitchen Tile Backsplash

How to Install a Subway Tile Kitchen Backsplash

How to Replace a Kitchen Faucet