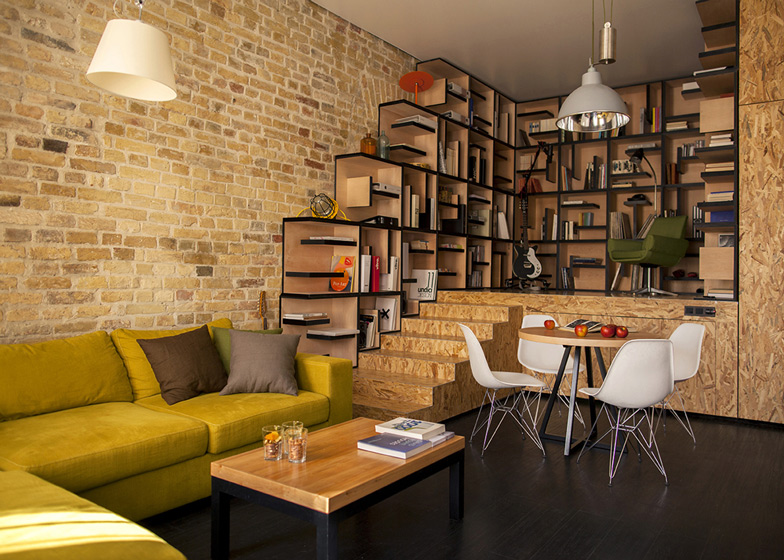 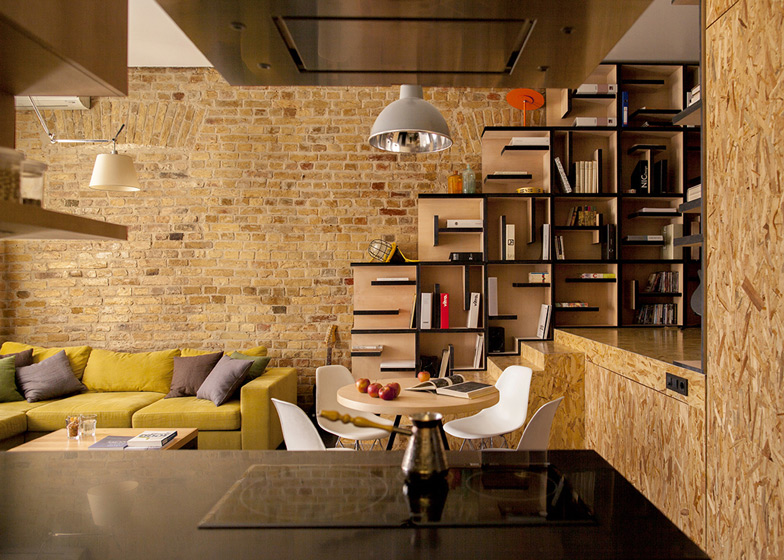 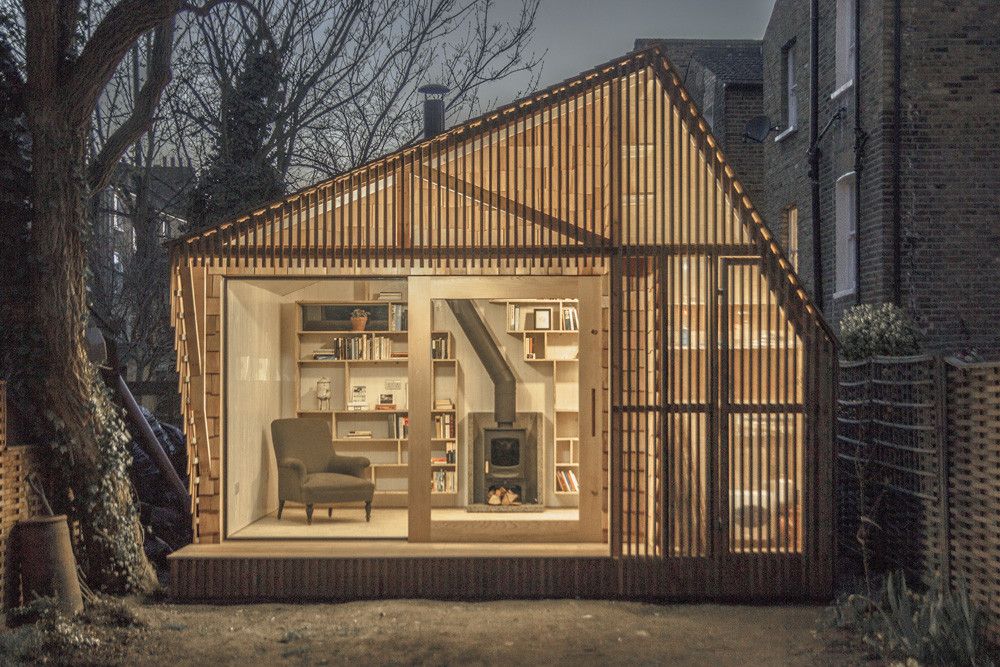 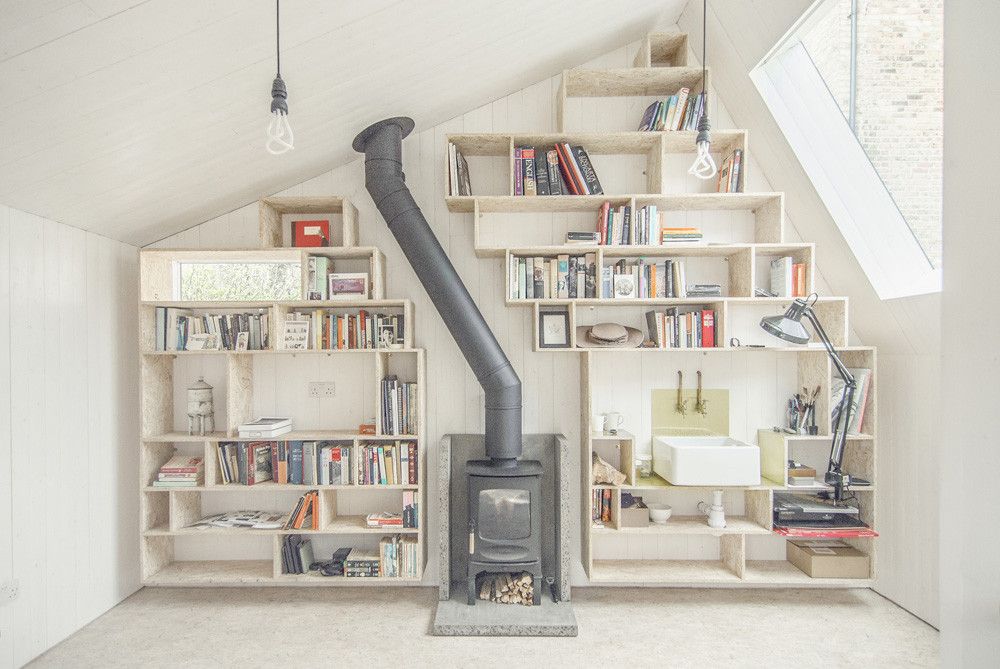 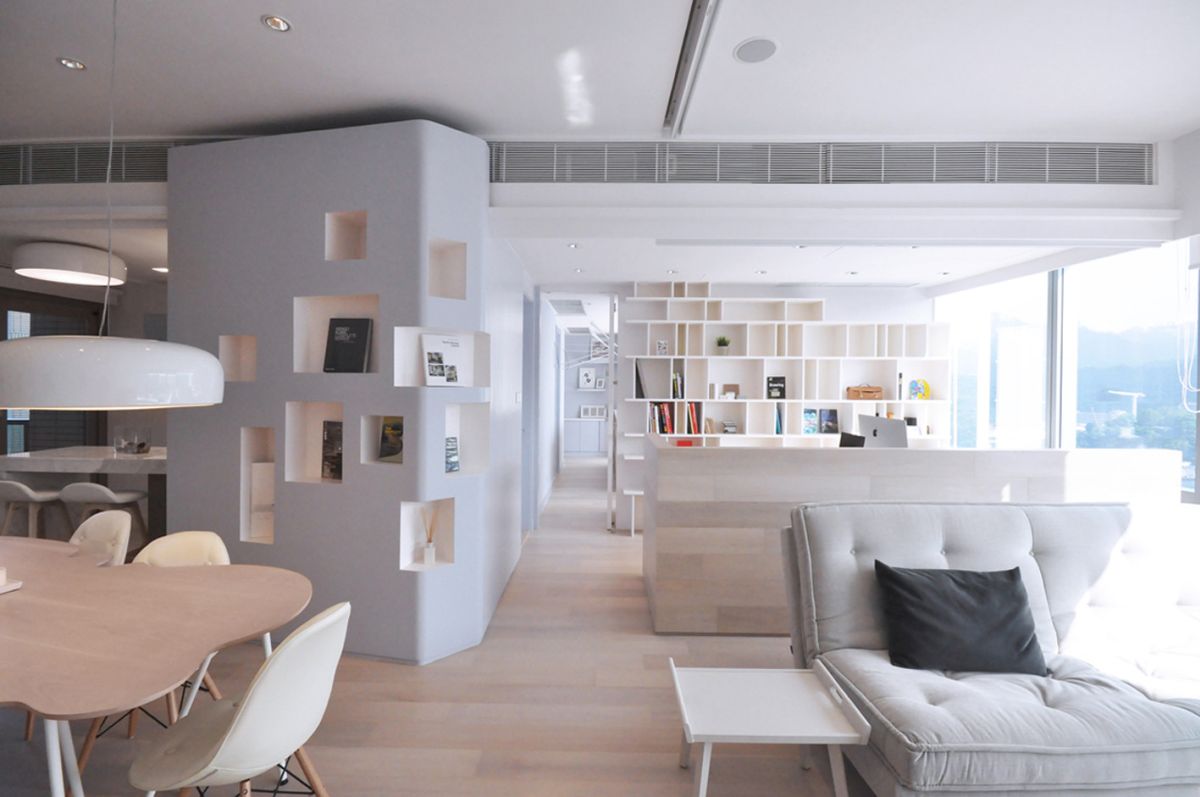 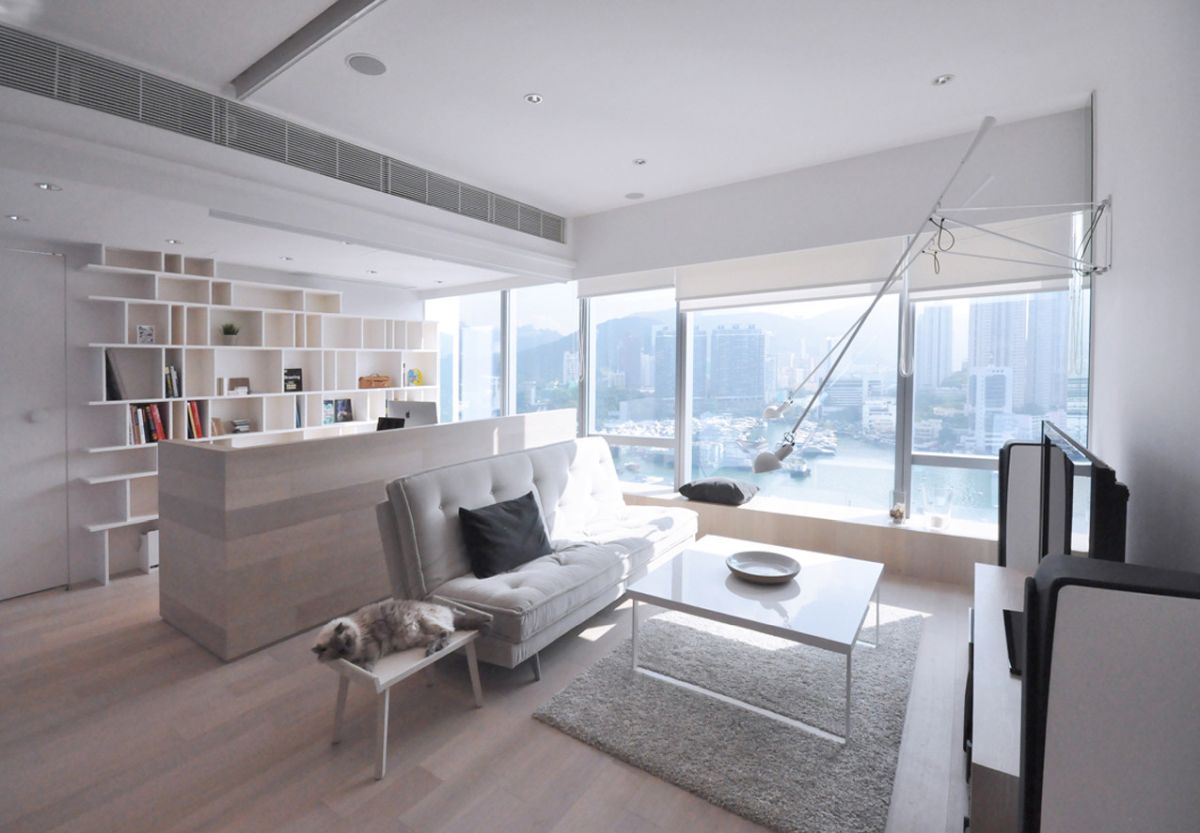 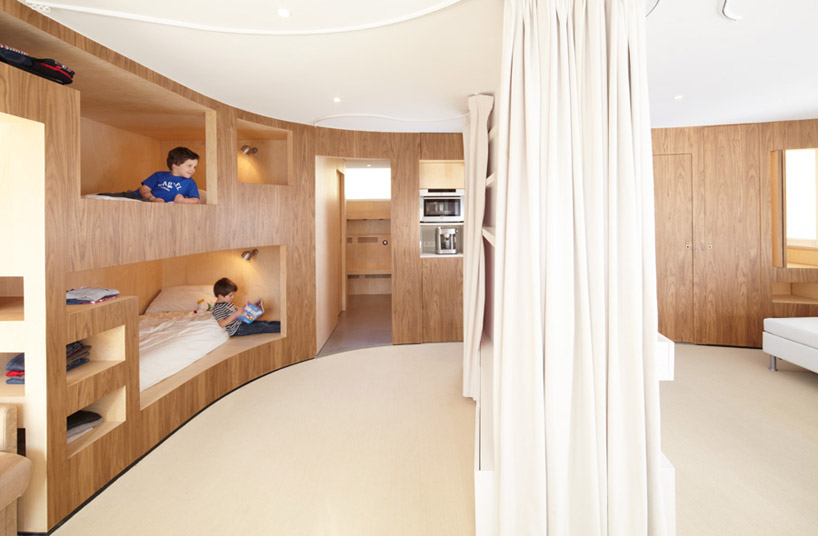 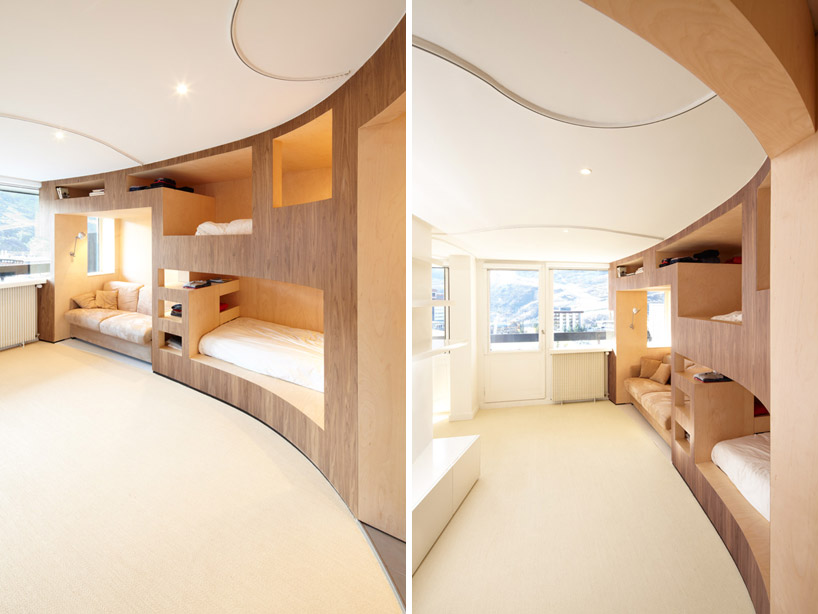 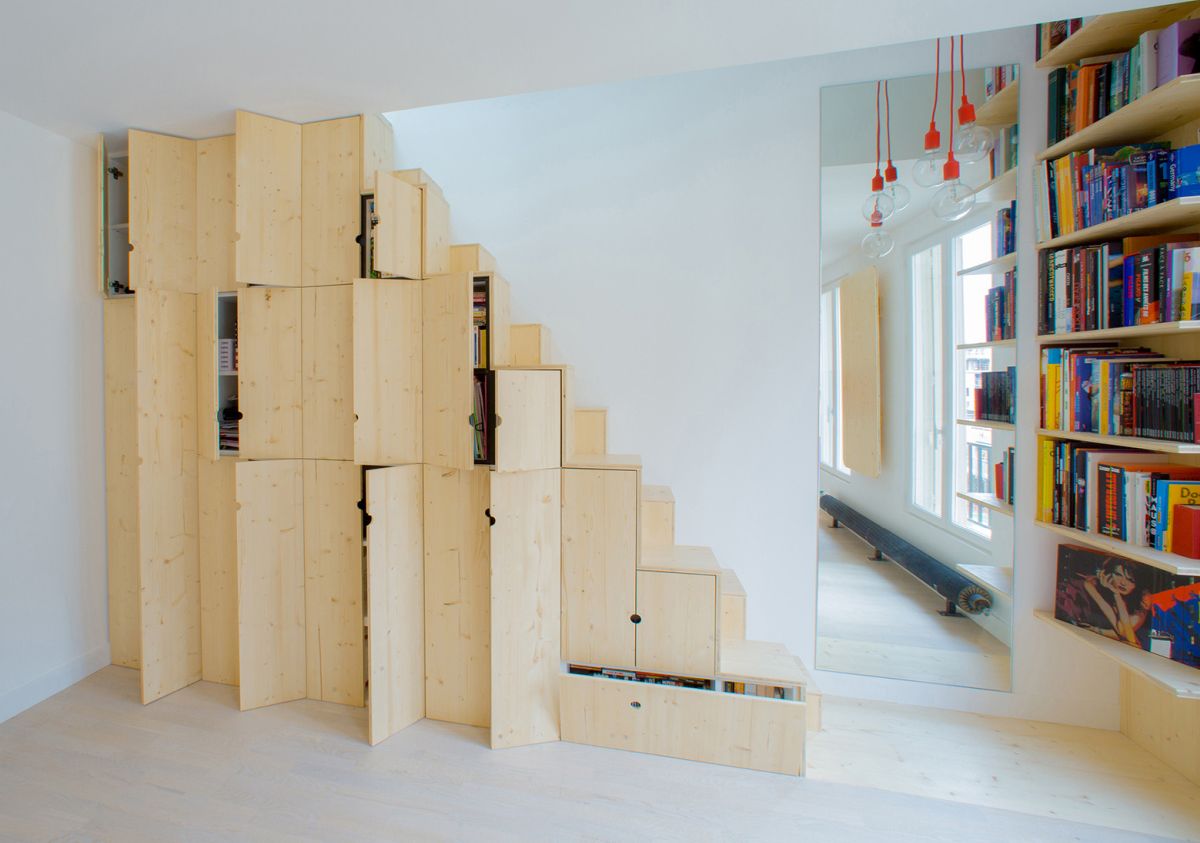 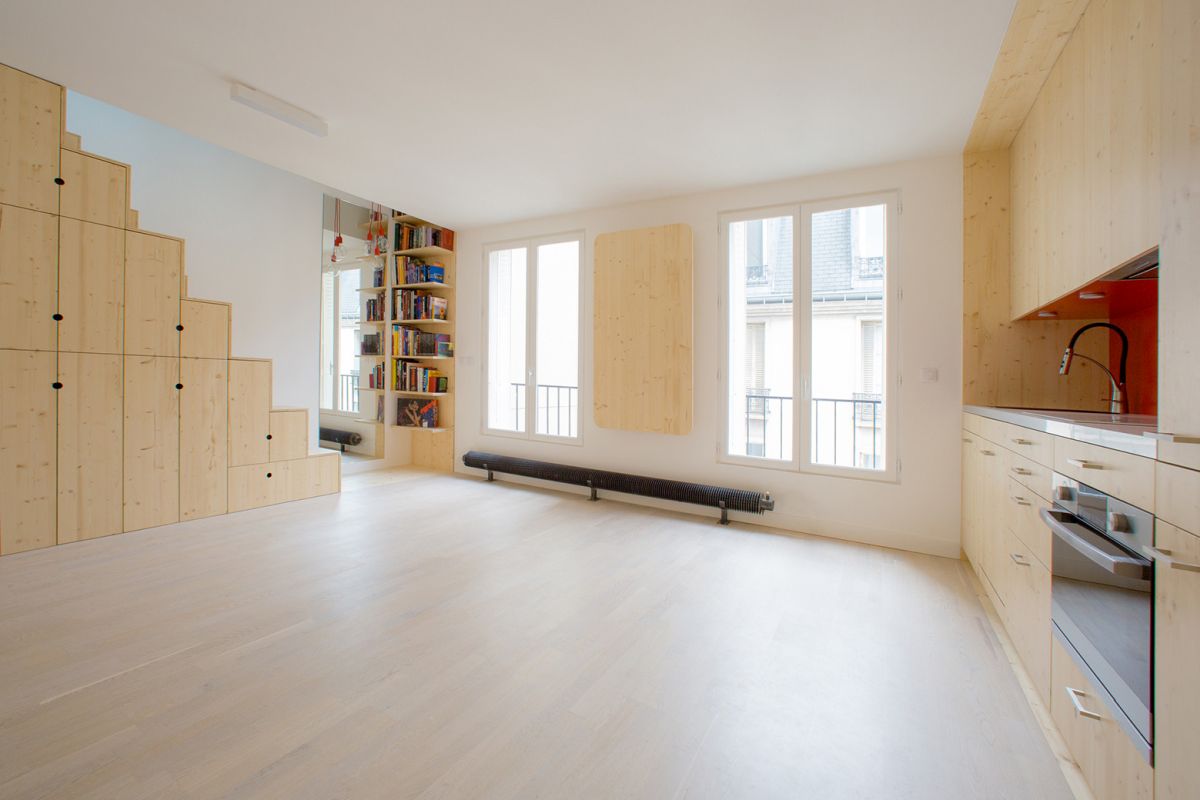 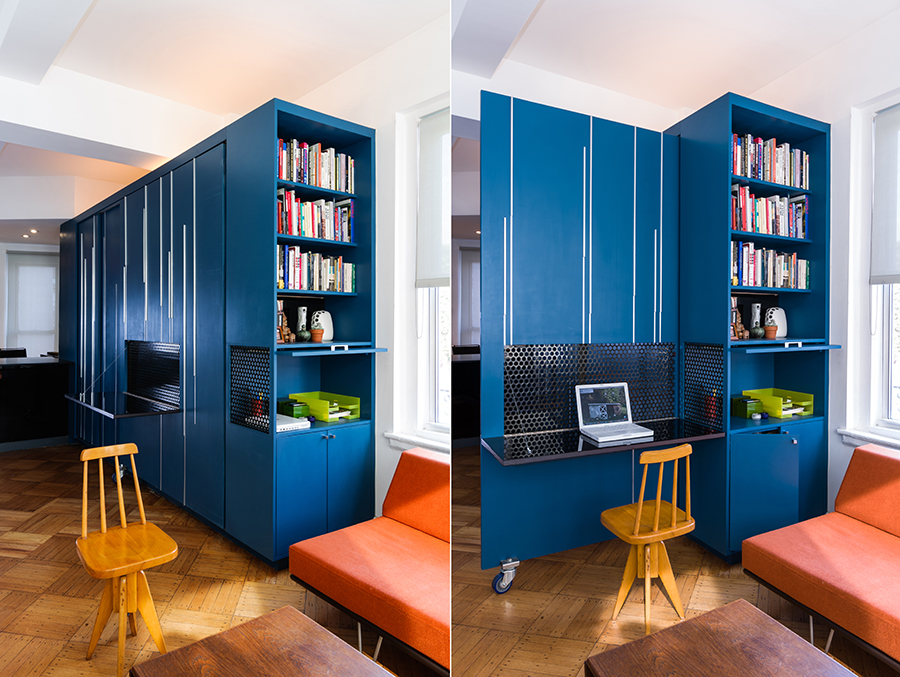 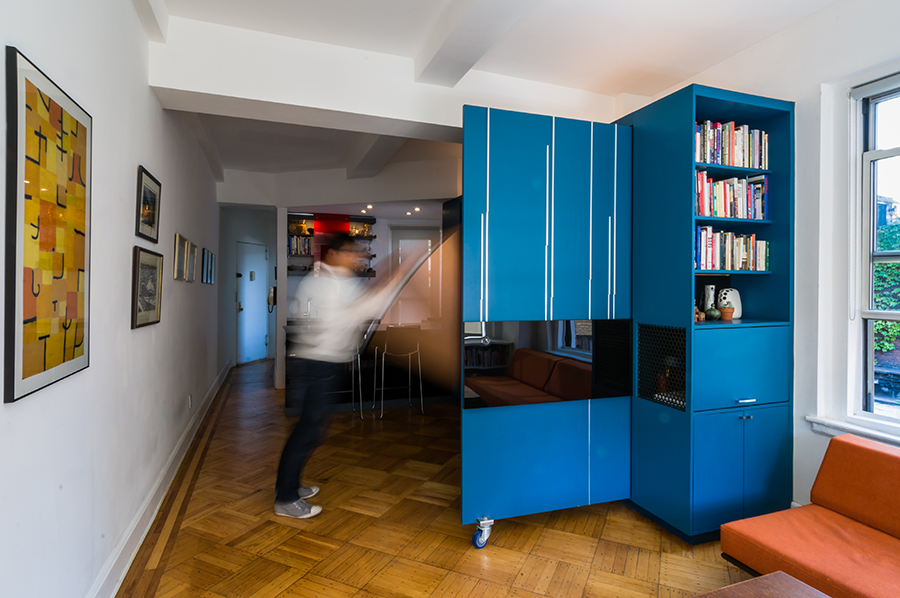 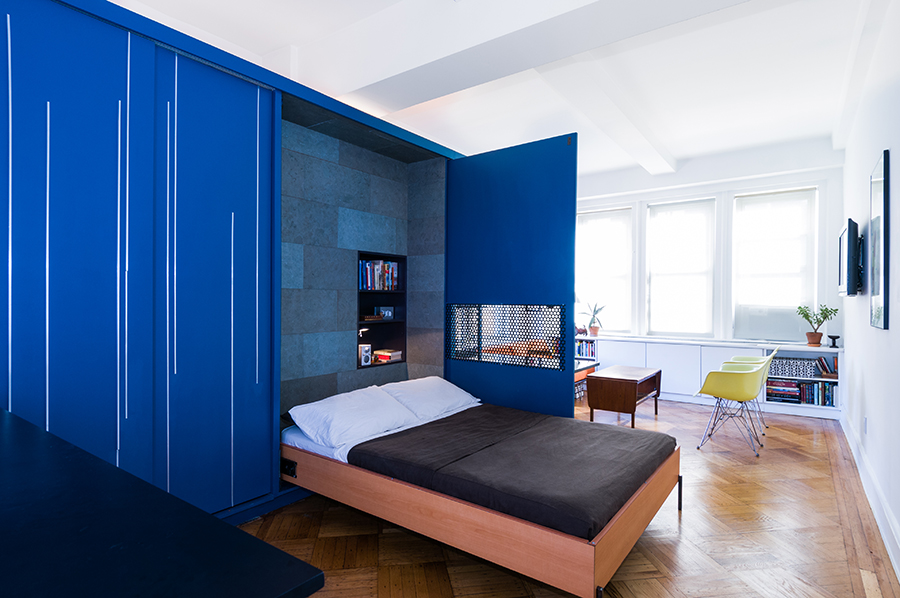 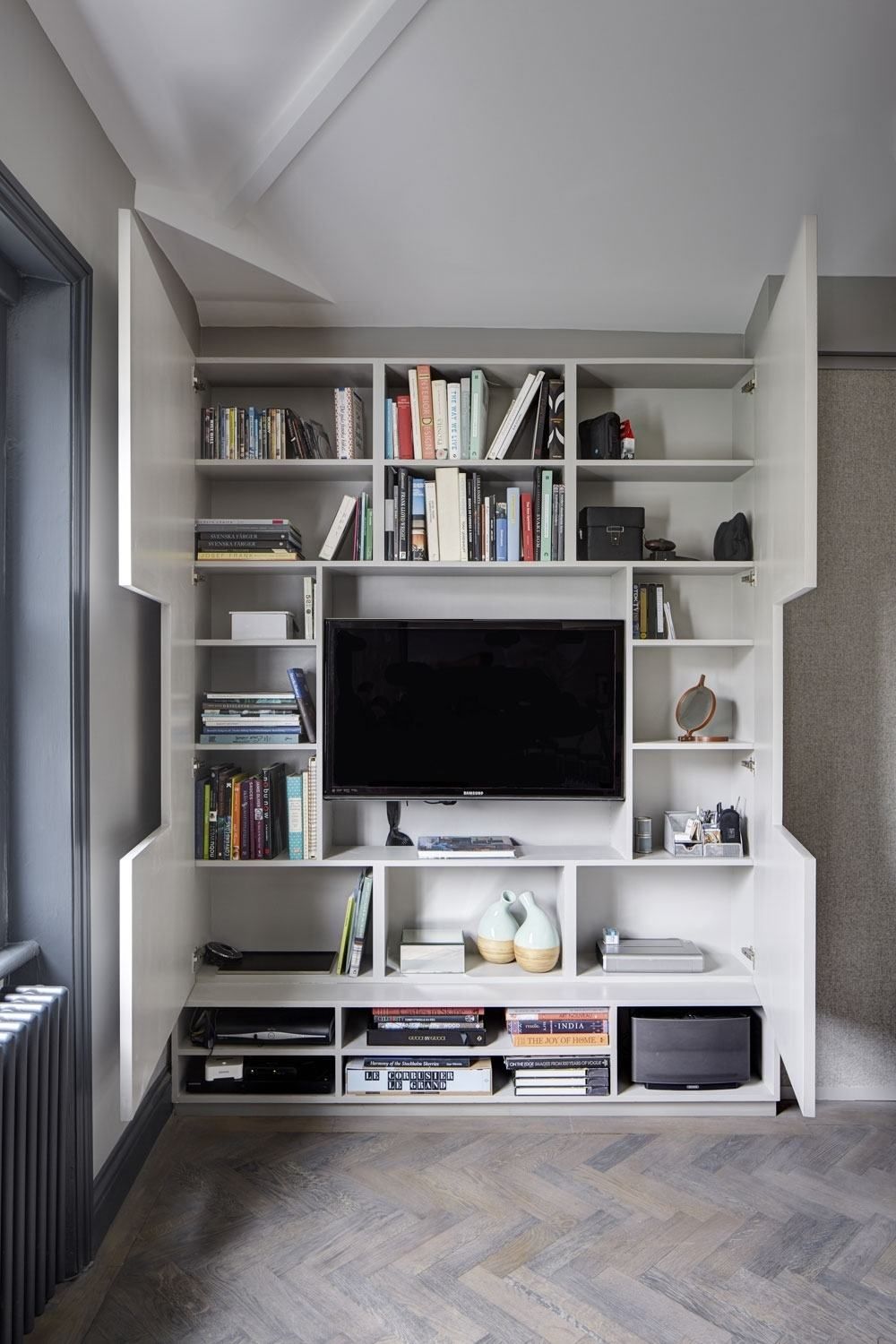 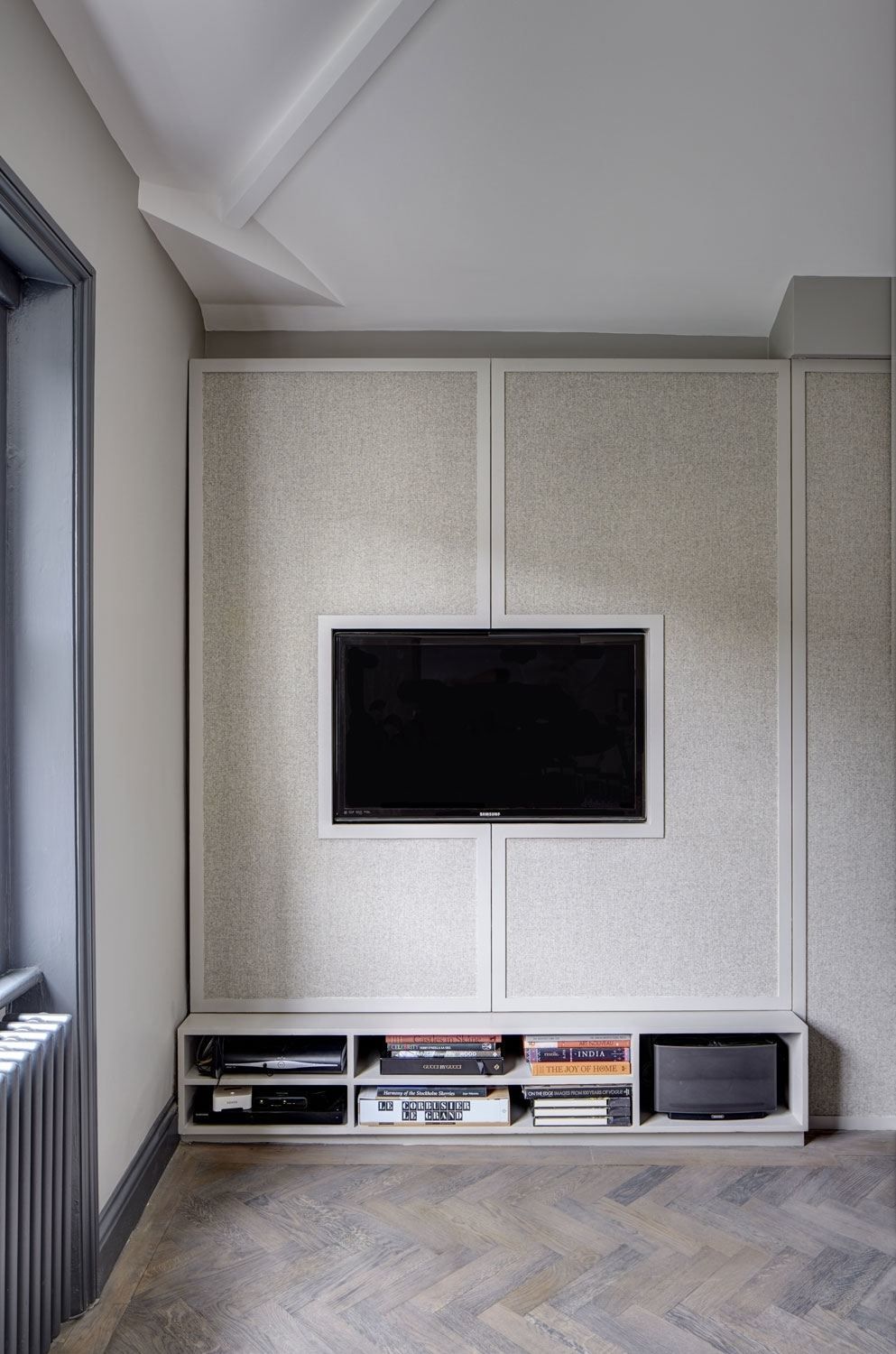 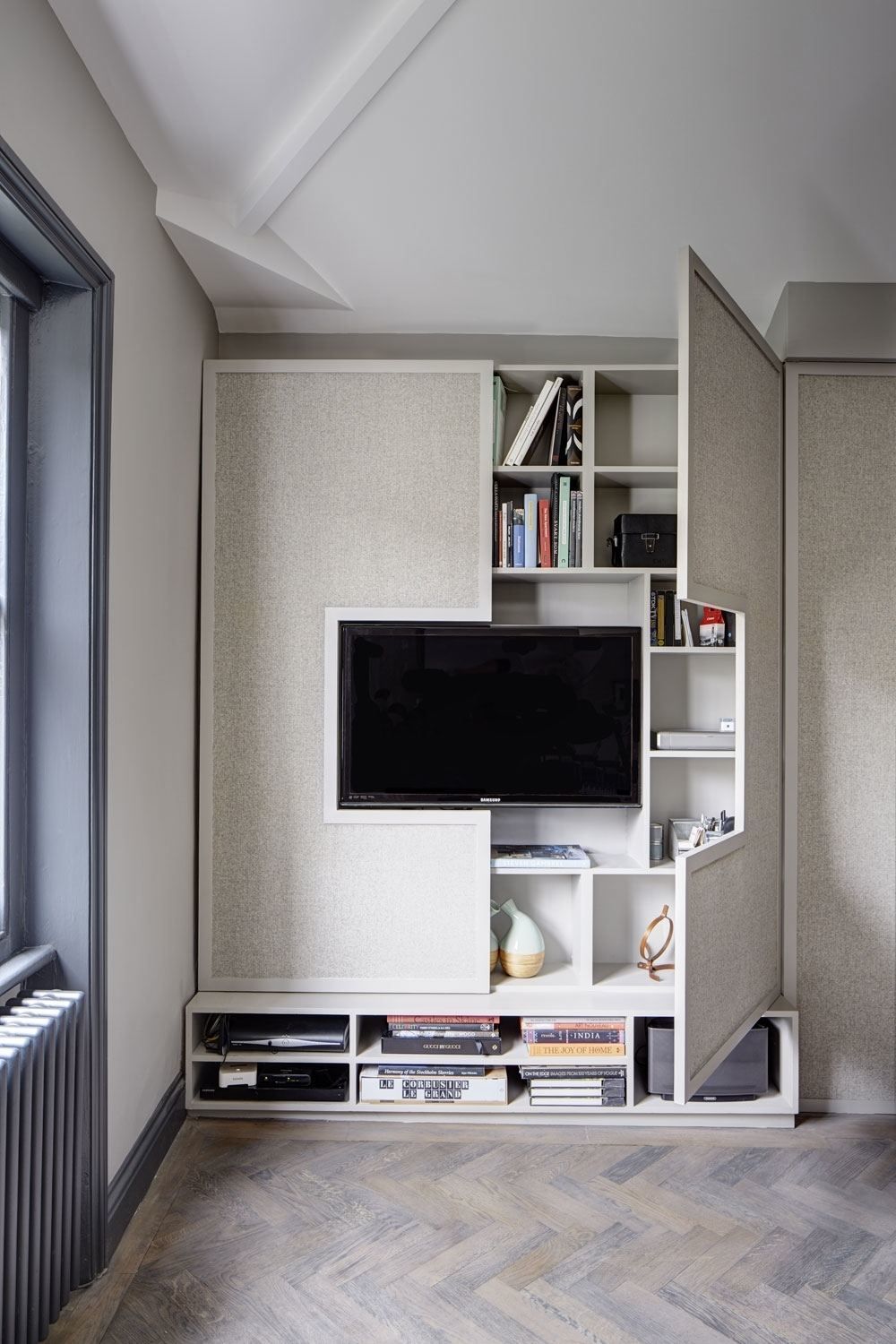 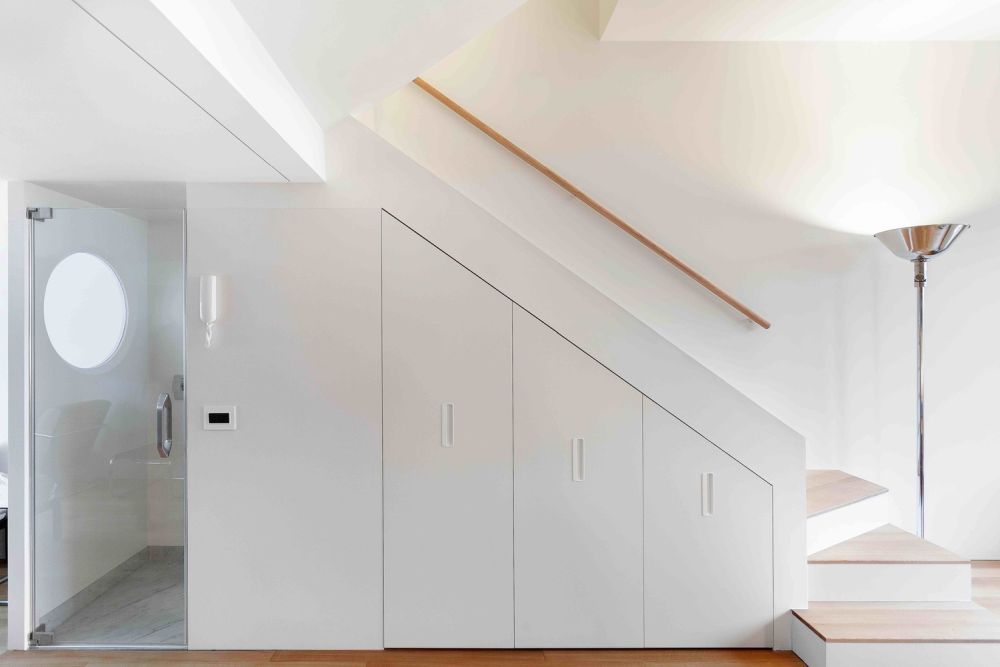 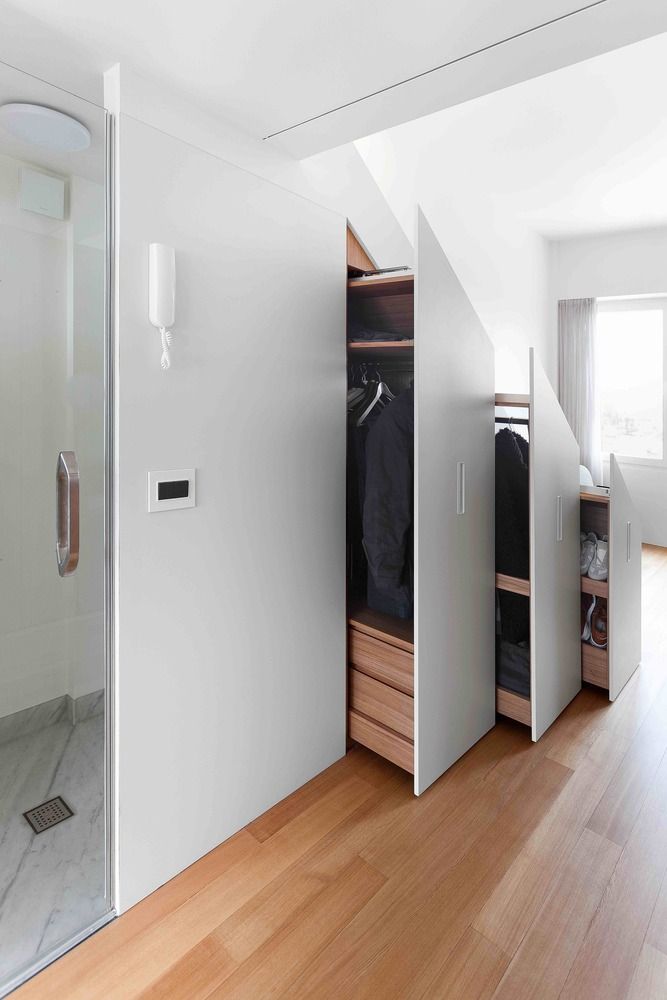 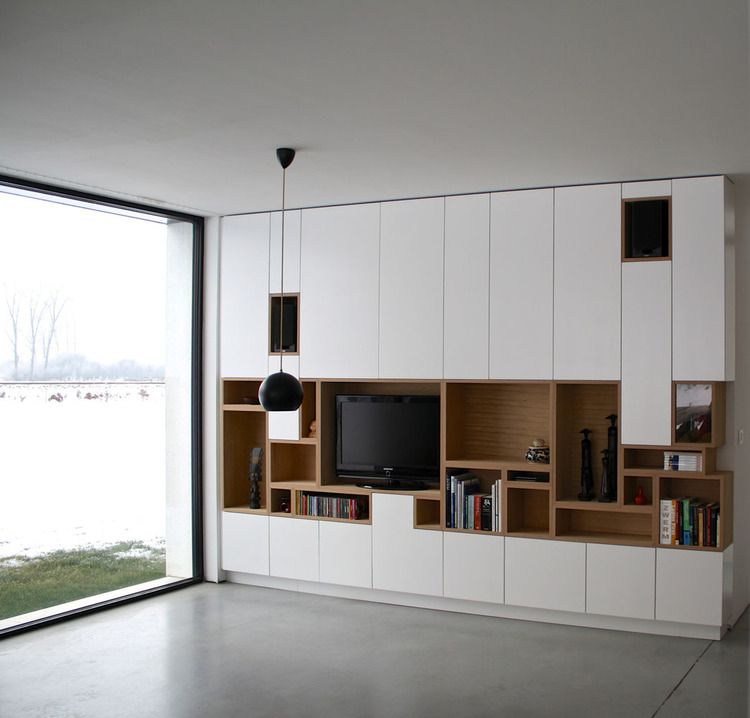 Wall storage, whether in the form of floating shelves, furniture units or something completely different is always practical and usually perfect for small spaces. There are many cool ways to take full advantage of all the different possibilities and design options when it comes to wall storage and today we’re excited to show you a few of these options, inspired by some really great interior designs.

The first project we’re going to take a look at is an apartment renovation done by architect Alex Bykov. The apartment is located in Kiev, Ukraine and is pretty small but, surprisingly, doesn’t lack storage space. The owner specifically requested a library and the best way to include this feature into such a small space was by raising it on a platform. This maximized the overall usable area, offering plenty of storage room and also ensuring a clear delineation between the spaces.

Another cool project is this writer’s shed from Greater London, in the UK. It was built in 2014 by WSD Architecture for a client who requested a workspace that would reflect his passion for children’s literature and mythology. The shed is simple, small and cute. It has a cedar facade with shingle cladding and a very lovely interior. There’s a wood-burning stove cleverly placed between a series of wall-mounted shelves and cubbies. The wall unit also perfectly frames the small window on this wall.

As mentioned before, there are numerous different types of wall storage, each one with its own unique particularities and pros and cons. This home designed by Bean Buro in Aberdeen, Hong Kong features two very beautiful examples. One is a wall unit composed of geometric shelves and cubbies that cover an entire wall section in the office from floor to ceiling and one is a series of wall niches that wrap around the exterior corner or a wall in the social area.

Wall storage is not only useful in the case of workspaces and offices in general and the idea doesn’t necessarily prefer to the user of shelves. Check out this mountain cabin designed by h2o architectes in France. It features this cool curved wall with voids that are actually sleeping nooks. The design helps to ensure a good organization and an increased living space. This design was also chosen because it helps the original structure of the cabin untouched.

Small apartments can usually use all the storage space they can get which makes wall storage units like this one extremely practical. This is the interior of a 32 square meter apartment from Paris, designed by Schemaa. There are two units, one placed between the entrance and the living and dining area (it integrates the kitchen cabinet and storage unit) and another with alternating thread stairs which offers access to the attic bedroom.

This funky apartment is located in Manhattan, New York and its interior was remodeled by MKCA // Michael K Chen Architecture in 2007. Even though it’s very small, it has all the important features and more. It’s all thanks to a large blue wall storage unit that’s full of secrets and surprises. The oversized unit is packed with things like a Murphy bed, a nightstand, a closet, a library, kitchen storage, a workspace as well as most of the lighting for the room. These elements can be revealed or hidden through reconfigurable doors and panels.

This home from Montreal, Canada has inspired us to think outside the box when remodeling and furnishing a space. Its interior was created by Mélissa Ohnona who didn’t let this window interfere with the plan of turning the wall into a big storage area. The designer created a large, custom-built wall storage unit that covers the entire wall and frames the window. It has large spaces for coats and other things on each side and smaller compartments at the top and the bottom. They form a cozy nook around the window.

Another clever design idea can be seen in this loft apartment from West London, England which was remodeled by Sigmar. The idea was to maximize the available space as much as possible and to create an airy and open vibe. At the same time, the apartment had to offer enough storage for everything the client owned. One of the solutions was to build a custom wall storage unit in the living area which incorporates the TV in it and which looks simple and very chic.

Another idea for maximizing space which is actually pretty common has to do with the staircase, more exactly the space under the stairs which often remains unused. This 33 square meter apartment from Moscow doesn’t let it go to waste thanks to the clever design ideas offered by Studio Bazi. The studio came up with a plan that allowed a series of pull-out storage modules to be embedded into the staircase wall. Each one offers storage room for things like coats, shoes and accessories, like most entryways do.

Living rooms usually require wall storage modules for things like electronics, books, decorations and various other items. This living room designed by Filip Janssens studio incorporates all these modules and shelves into a single large unit which covers an entire wall. the unit features a combination of open and closed spaces with room for a TV inside one of them. The overall design is geometric, modern and simple which allows the room to remain uncluttered and welcoming and prevents it from feeling small.