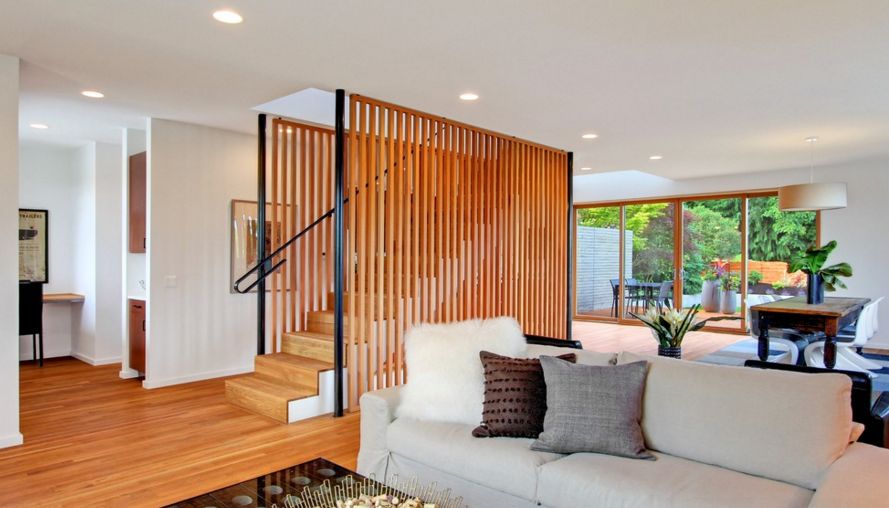 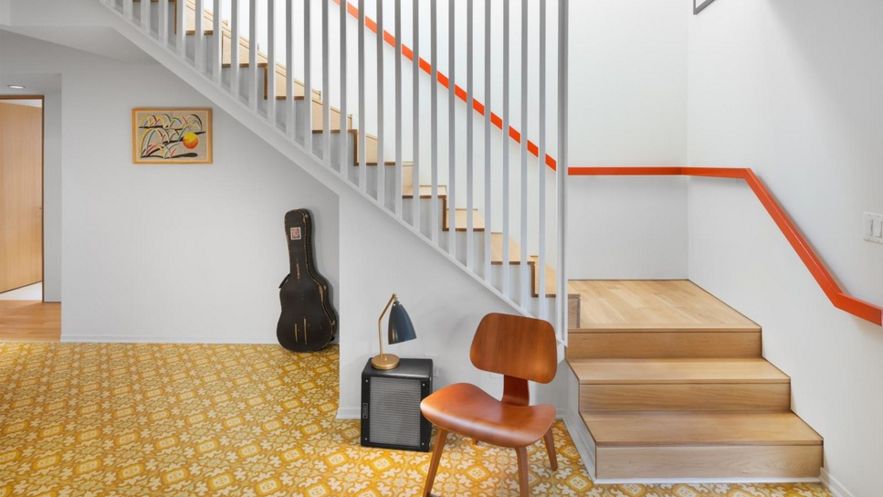 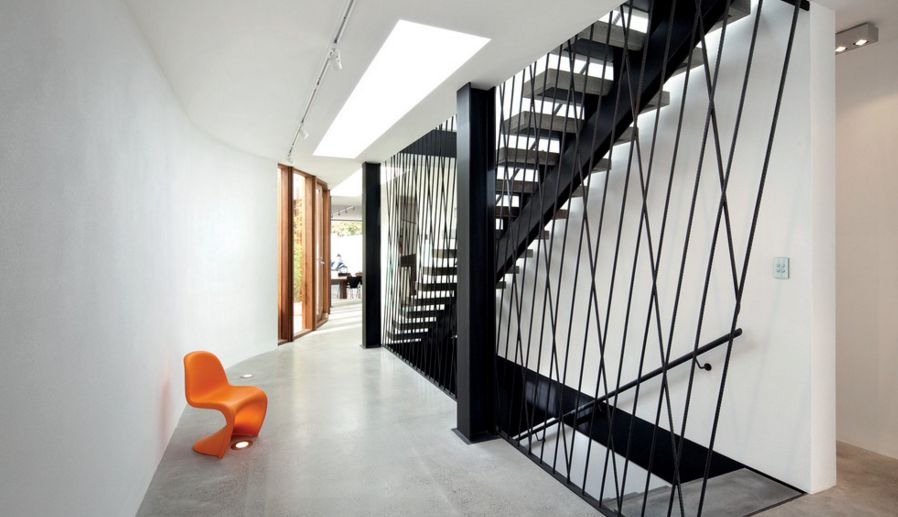 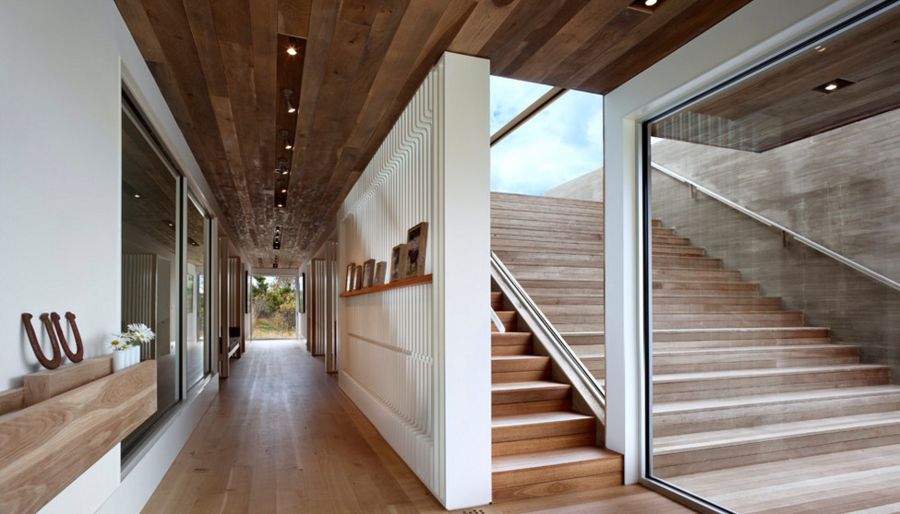 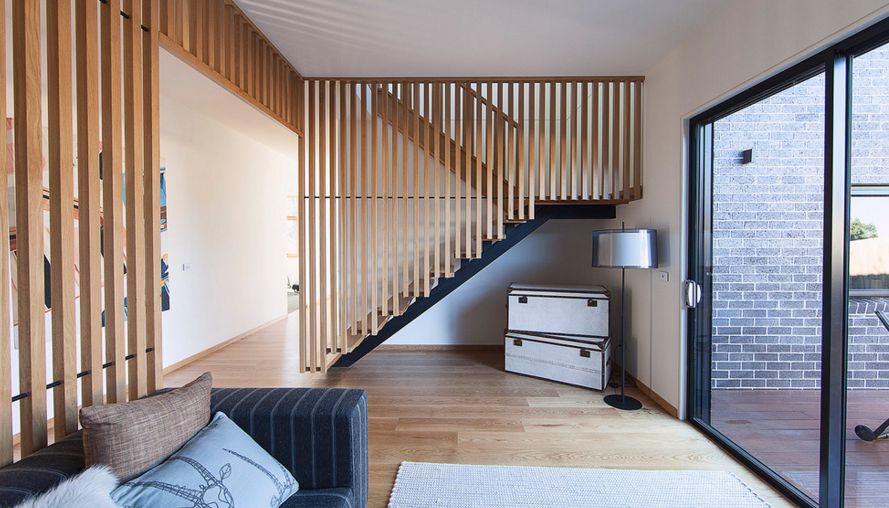 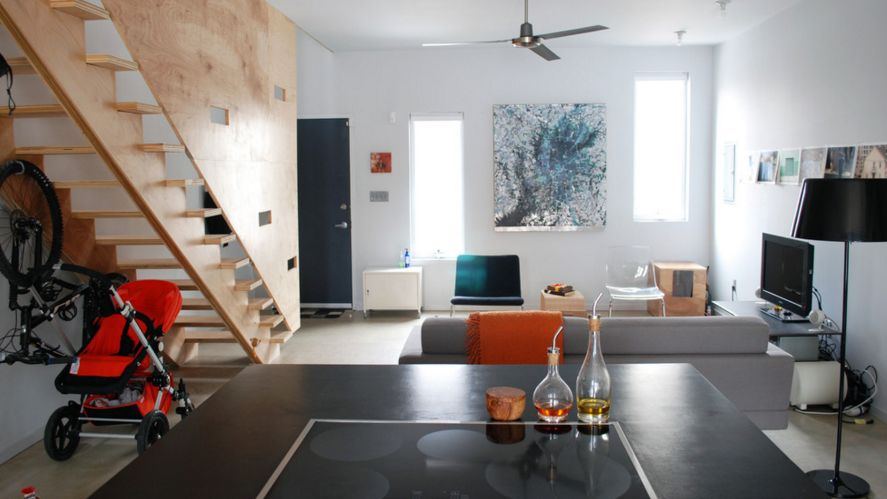 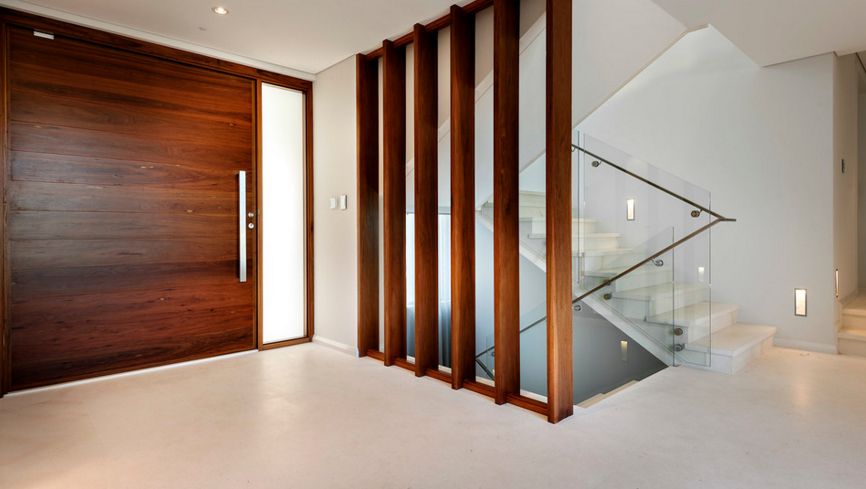 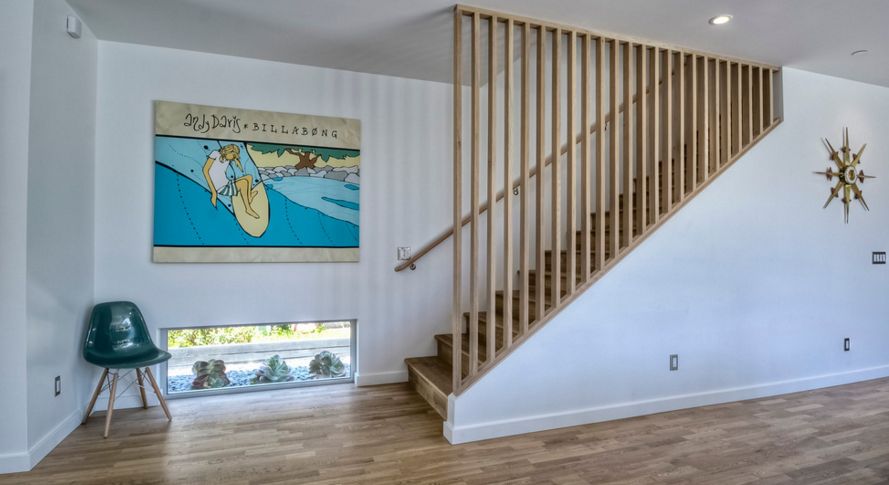 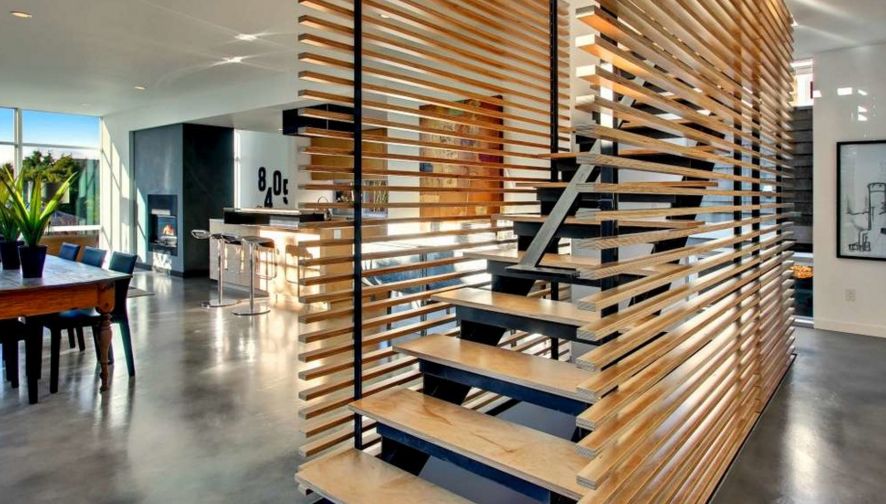 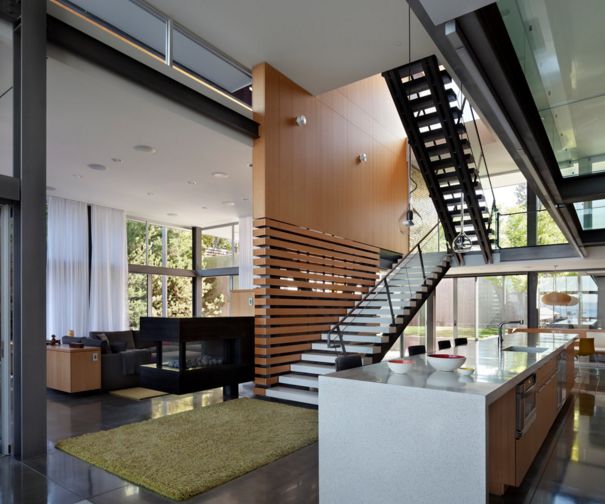 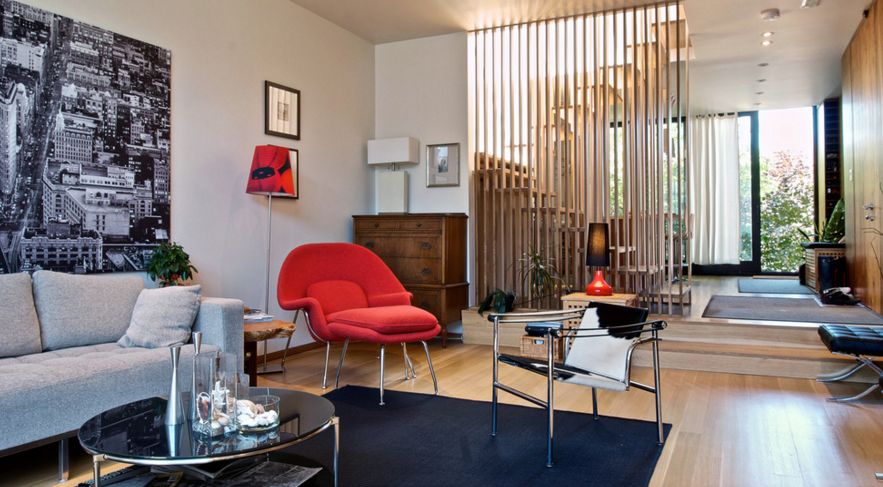 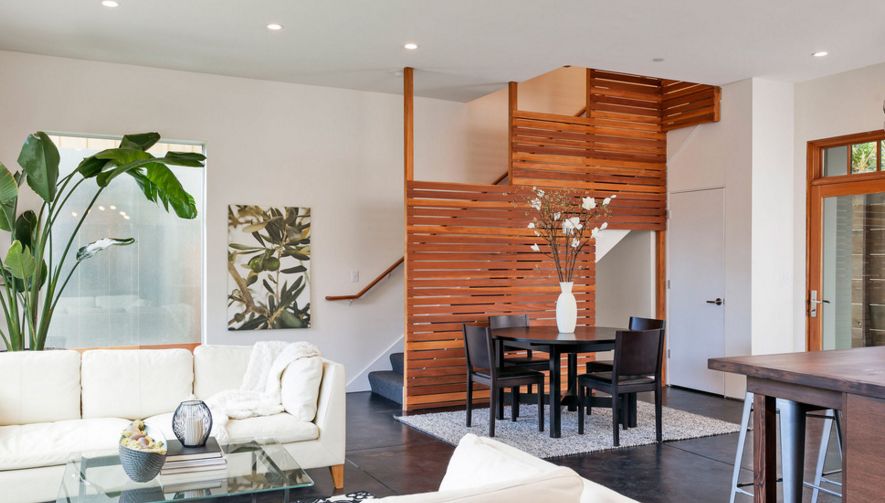 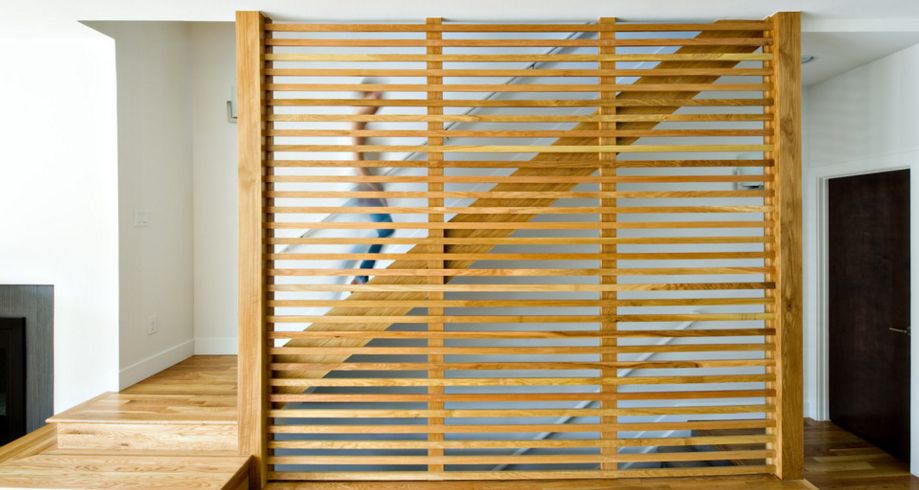 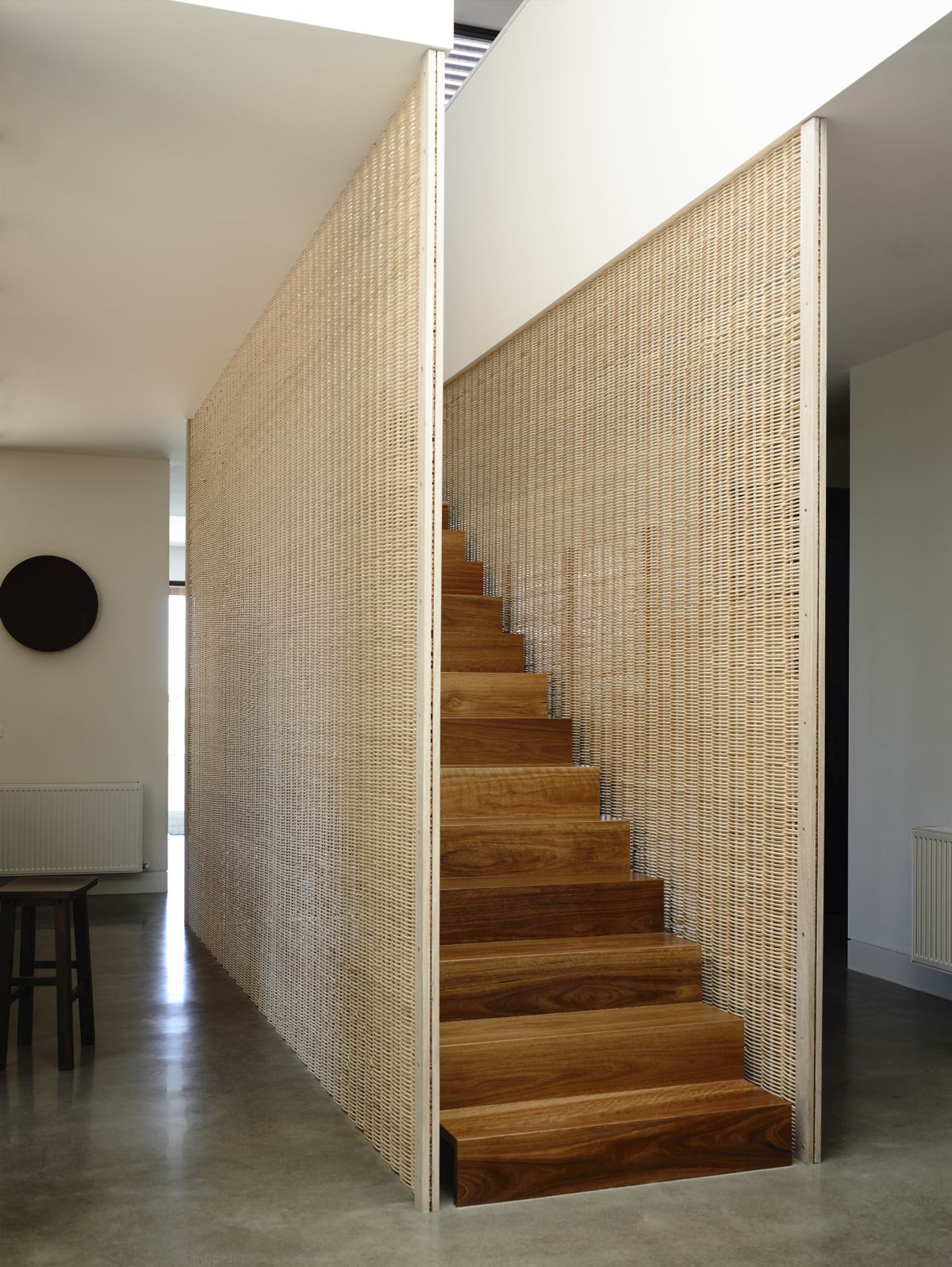 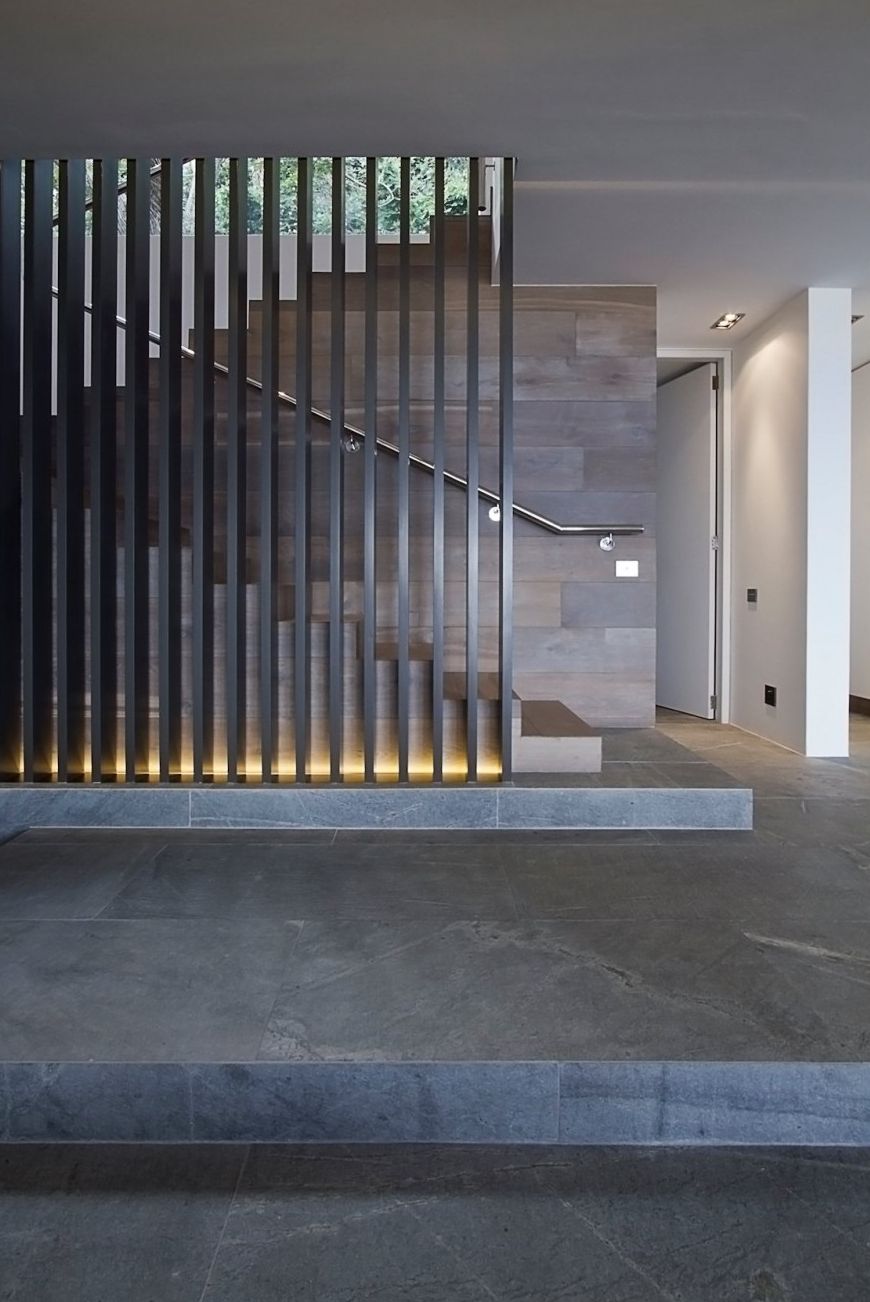 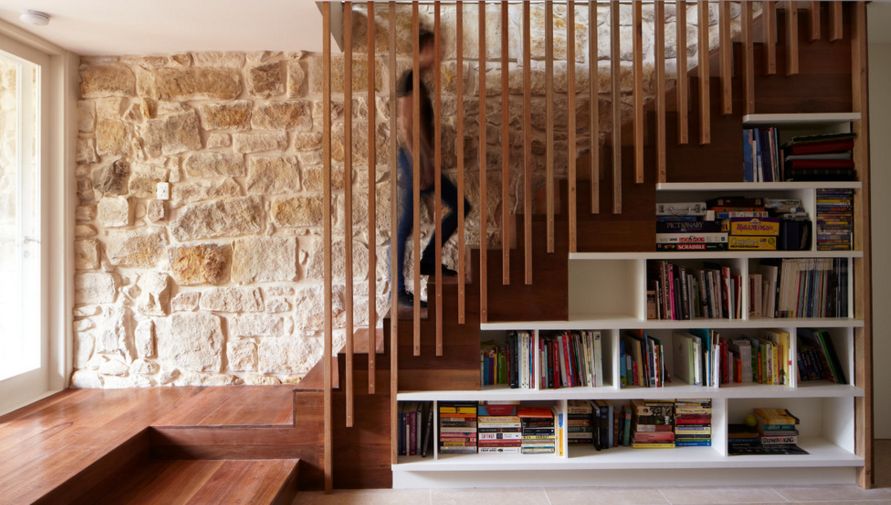 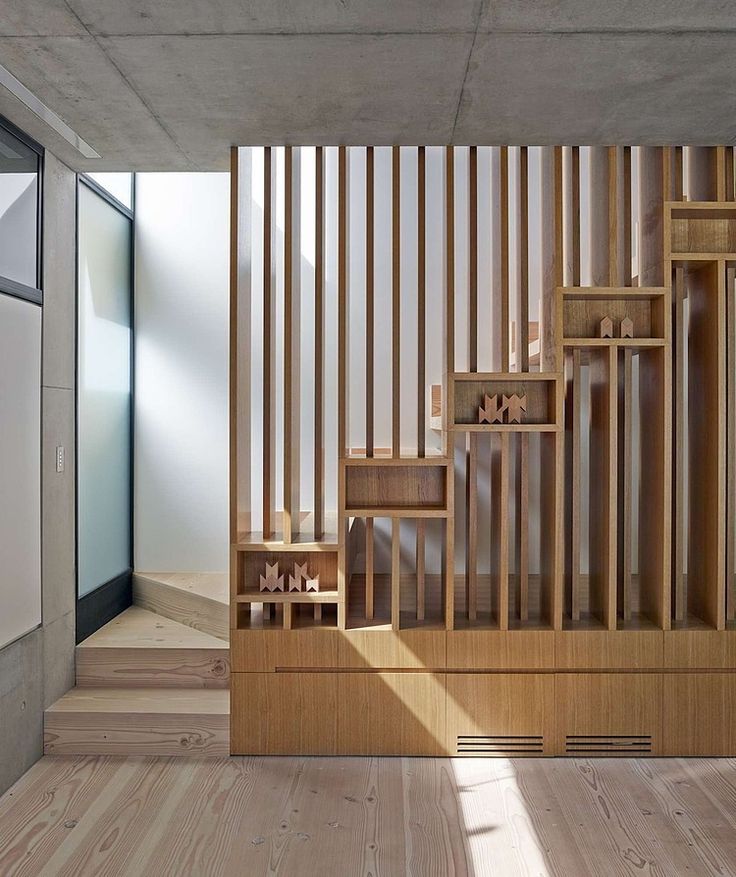 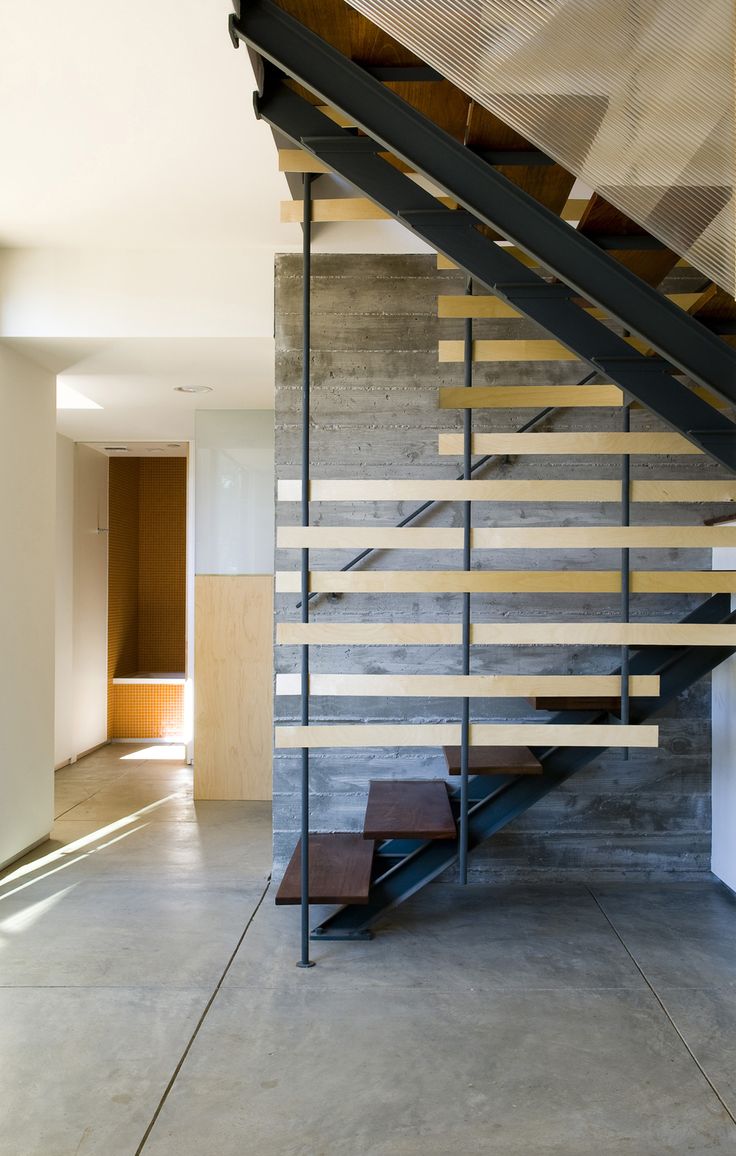 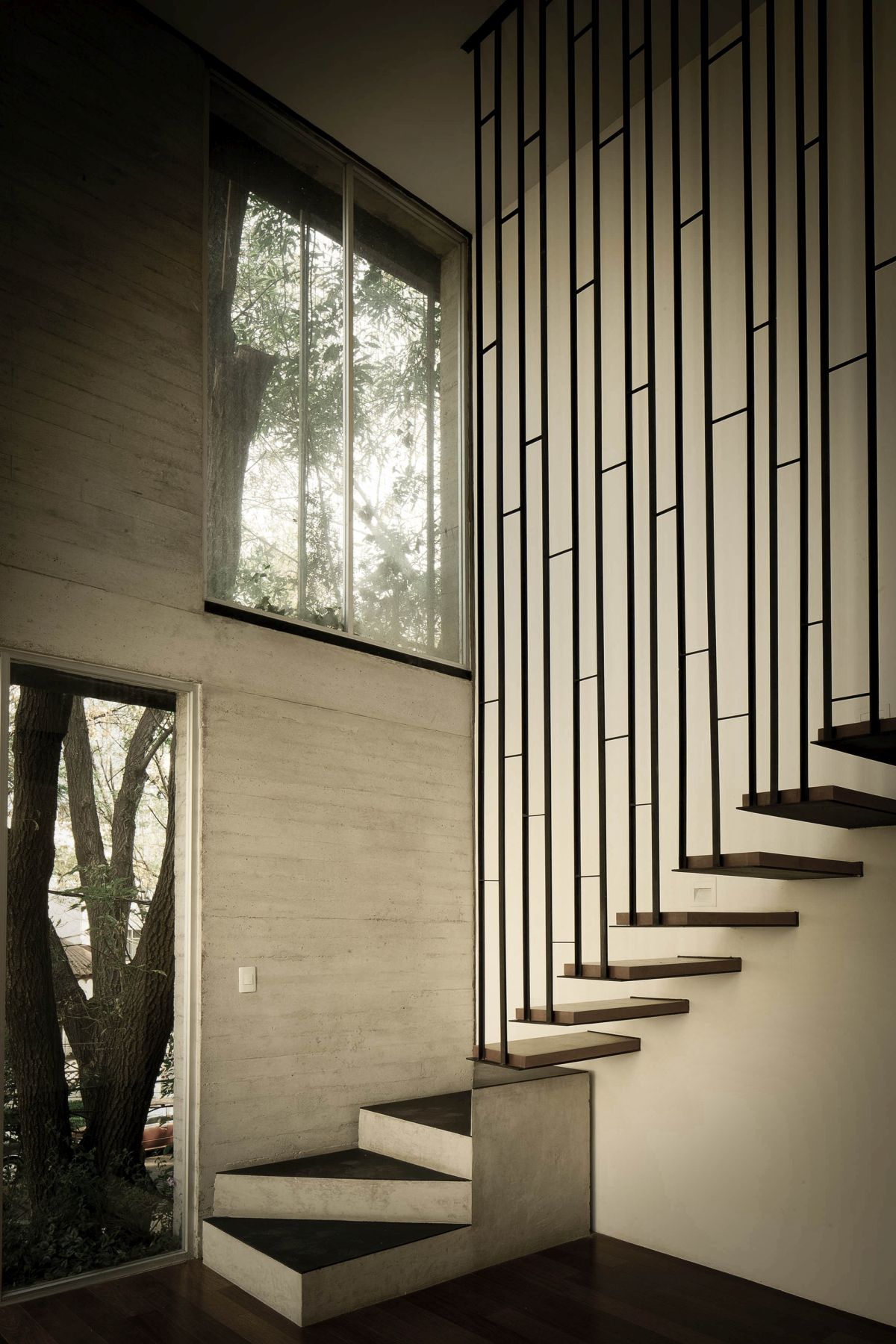 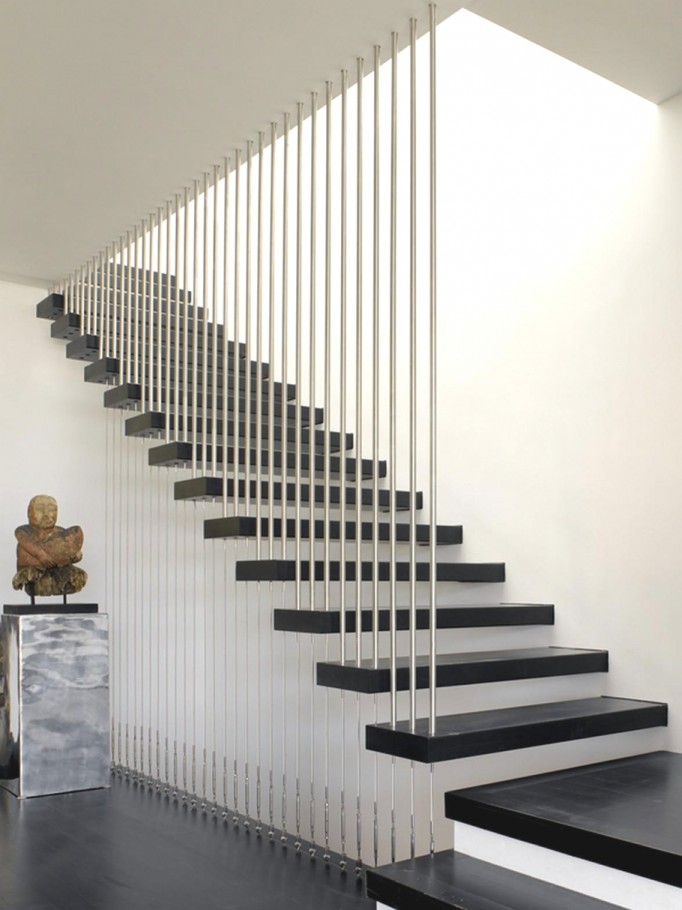 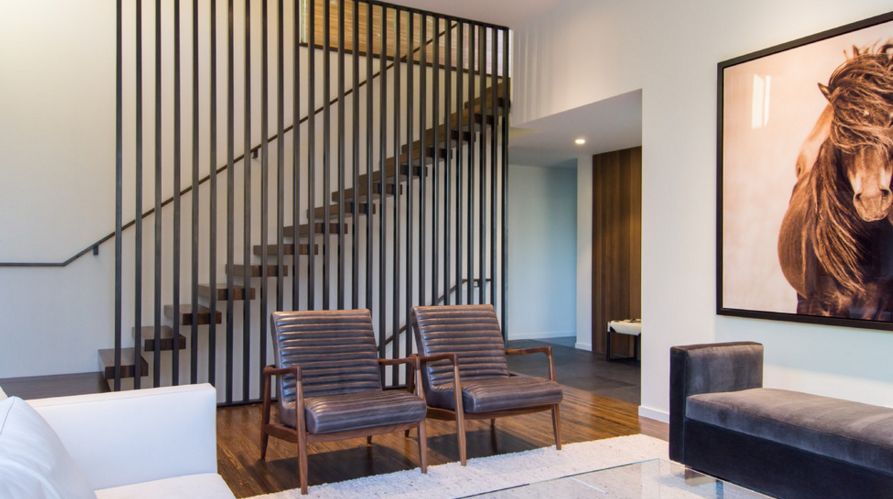 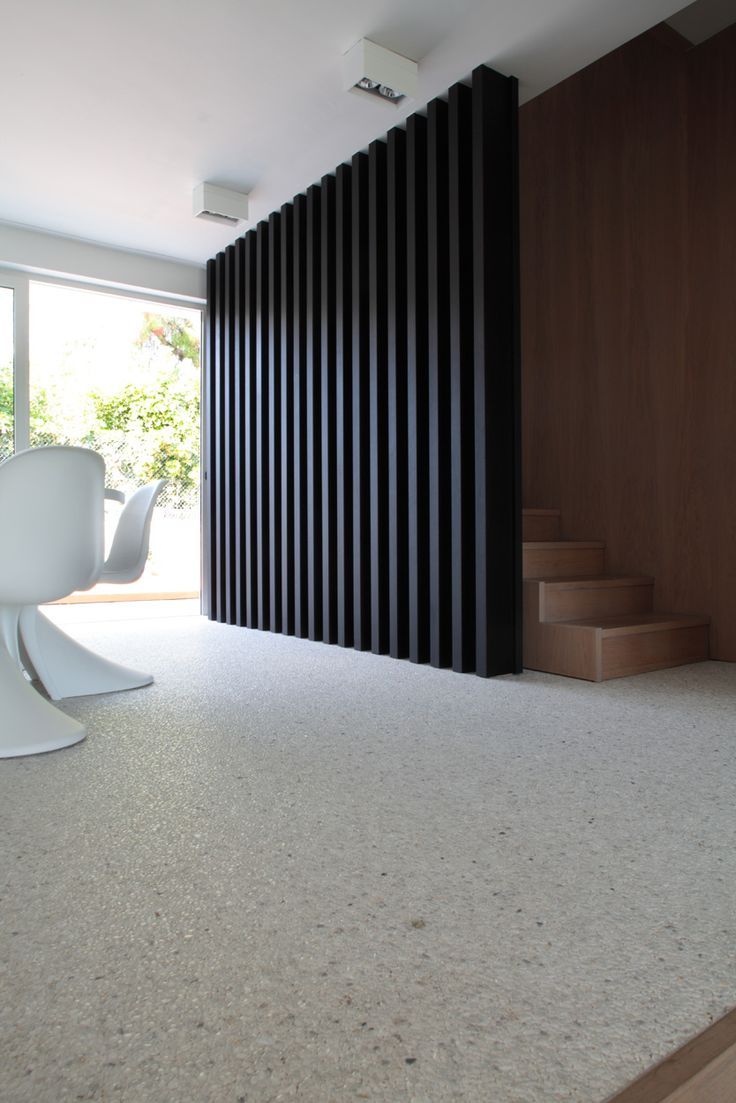 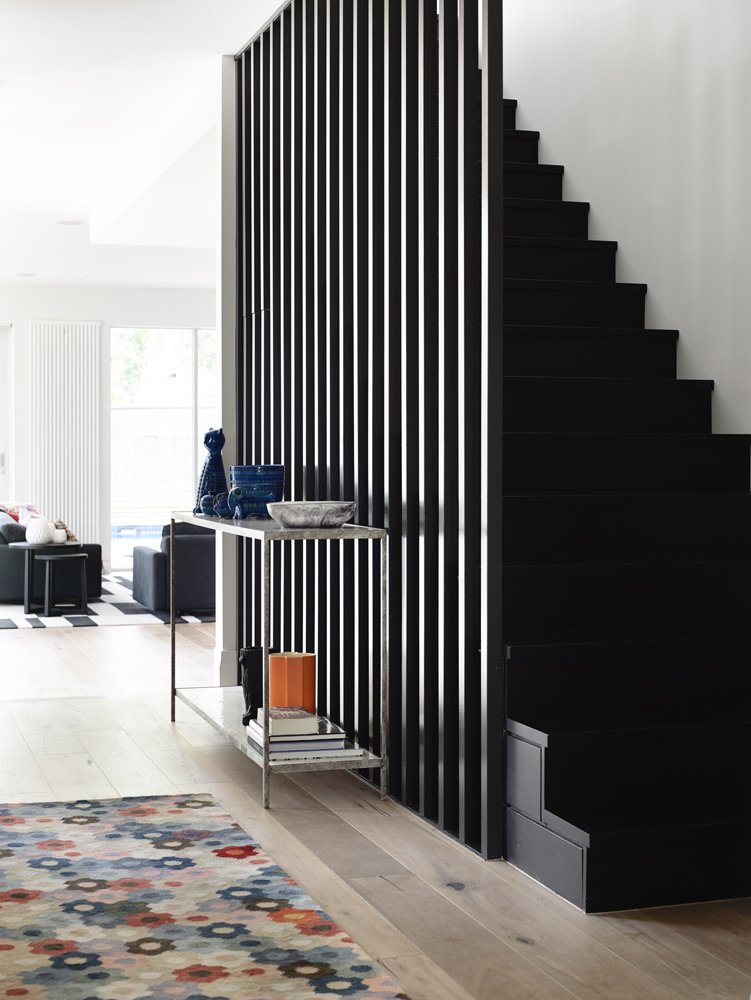 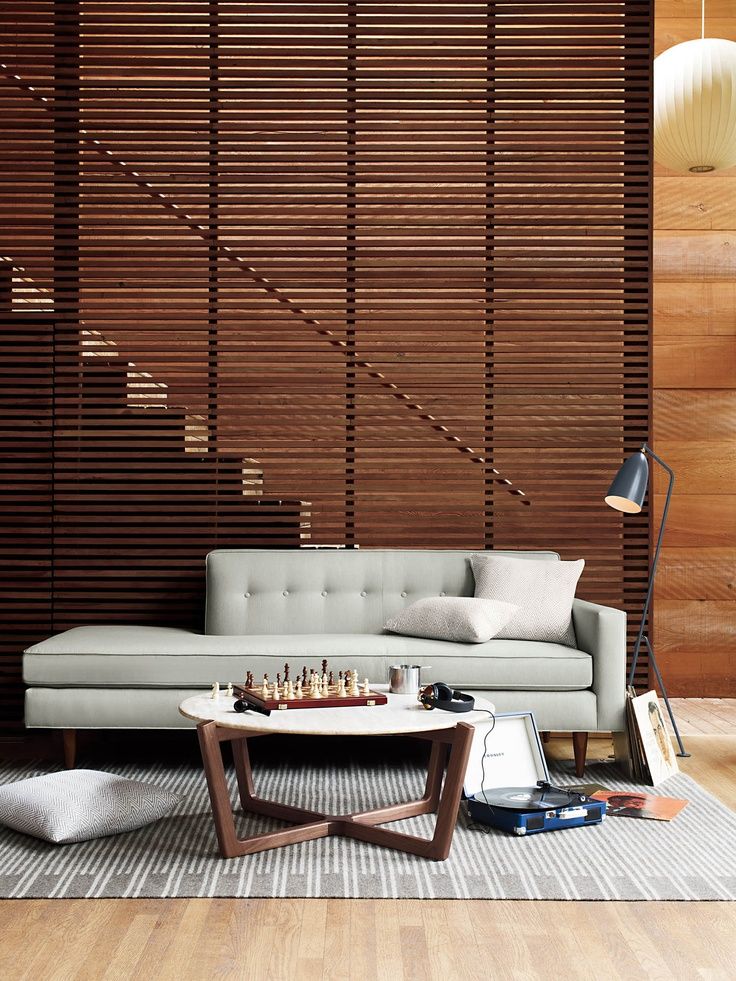 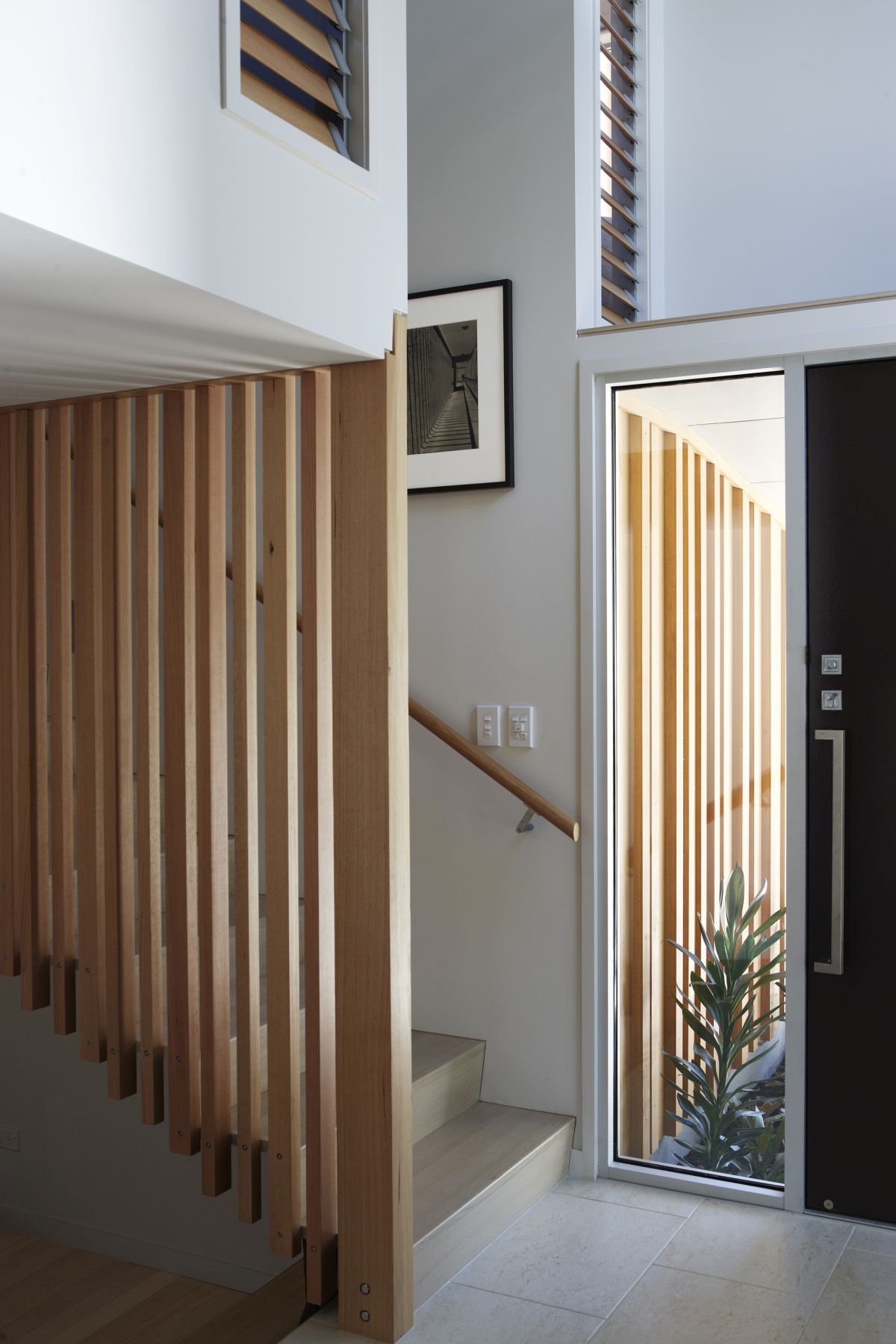 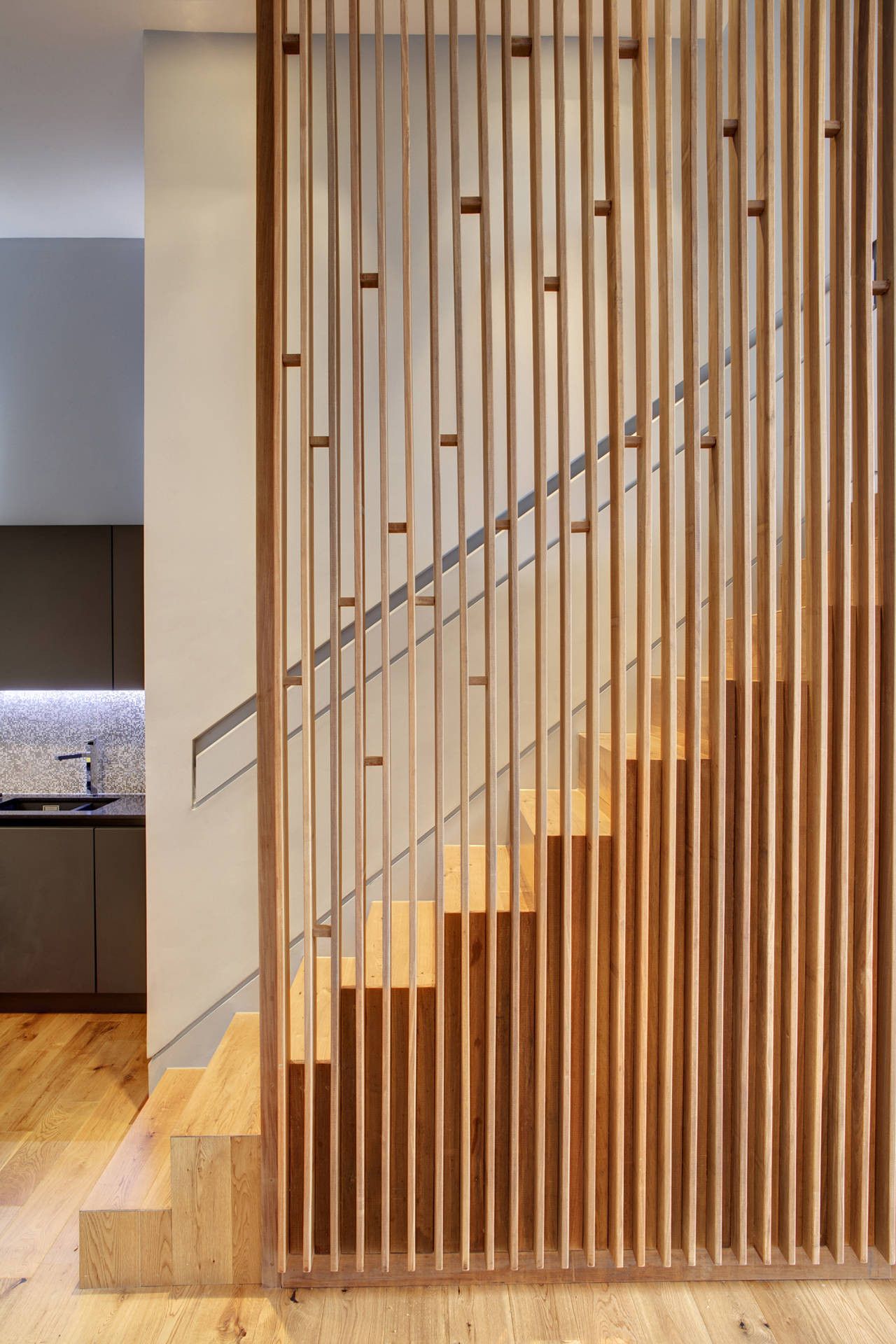 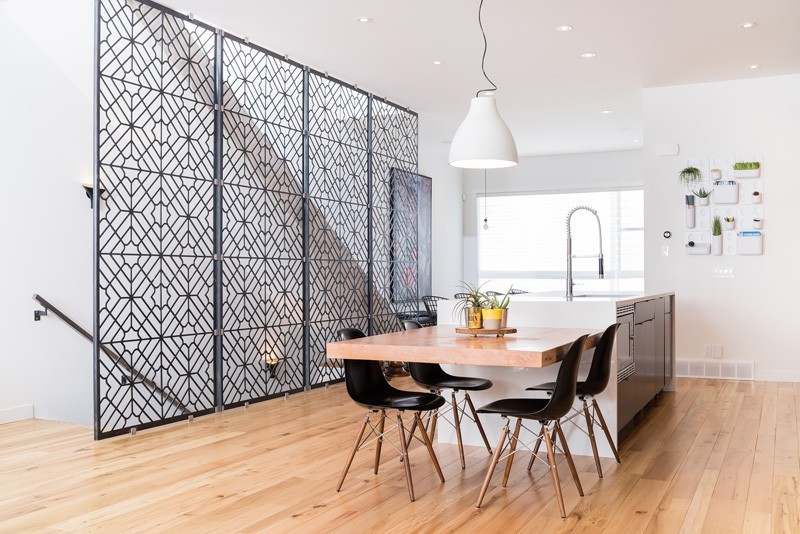 Staircase screens or stair guards most often play a double role in the interior design of a home. On one hand they serve as safety screens while also offering privacy to the spaces. On the other hand they also have a decorative role, acting as accessories with all sorts of interesting patterns. The diversity of patterns such a screen can feature brings with it numerous interior design and décor possibilities

This is a Jali-inspired pattern, the term referring to perforated screens usually found in Indian and Islamic architecture. The design was made by Beyond Homes together with BBLOC, and is in sync with the overall modern style, employing a geometric pattern that allows light to pass through.

A popular design for staircase screens focuses on emphasizing the linearity of the sleek elements that form them. The parallel timber fins featured here are interconnected in a seemingly random pattern. Such a pattern coordinates well with contemporary interior designs.{found on Studio Verve Architects}.

Similar designs can feature thicker fins or can play with various proportions in order to avoid a completely linear pattern and a monotonous look. The result can be a sculptural design that stands out in a subtle and elegant way.{found on Strachan Group Architects}.

A similar but, at the same time, different approach features a horizontal pattern. Such a design can be used to highlight the geometry of a space or in combination with contrasting patterns. In this case, the screen coordinates with the rug which in turn features a series of parallel lines and a simple pattern.

Vertical fins are used in this case by Mim Design to emphasize a high ceiling and to direct the attention upward in an elegant and subtle manner. The simple pattern and neutral color keep the overall décor simple, balanced and cohesive.

An interesting play on the repetitive linear pattern emphasizes this perfect symmetry through a series of solid timber fins designed to stand out both through their proportions as well as through color. This design strategy works in the case of contemporary interiors that focus on simplicity.

The spacing between the parallel fins can differ, depending on the visual effect they help create. For example, in order to let more light filer through the screen allowing it to enter the back portion of the room, the fins are sleek and more scattered than in other cases.{found on lanewilliams}.

For a sculptural and eye-catching effect, some staircases use metal rods. These are embedded into the design and run through the stairs, allowing them to stay suspended and to appear as if they’re floating. Each step is attached to the wall at one end and supported by the rods on the other.

Another sculptural design is featured by the staircase screen created by DMP Arquitectura for the Hera 24 residence. In this case, the strategy was to use a geometric pattern and to keep the design simple but diverse.

Some staircase screens are mostly decorative, using unusual materials and featuring interesting patterns. One example is this staircases which is defined by two floor-to-ceiling cord screens meant to add a dramatic and artistic twist to the otherwise minimalist décor.

Symmetry is not always a part of the design. In fact, some patterns take great advantage of its absence. Such is the case of this staircase screen which uses a series of wooden boards and metal rods to emphasize a casual design with a strong industrial allure.{found on archinect}.

Some staircase screens are really clever at maximizing their functionality. A good example is the residence designed by Nobbs Radford Architects where the stairs extend to form box shelves embedded into a timber fin screen.

Another great design strategy transforms the staircase wall into a storage space or a bookcase. As a result, the lower section is a series of shelves while the upper portion is a simple timber fin screen. Combined, these two maximize the functionality of the space without neglecting style.

Every little detail plays an important role in the overall design of a staircase screen. This includes elements such as the materials used, the finishes and colors employed as well as smaller details such as the accent lighting. In this case, the warm light strip at the bottom of the screen highlights the pattern.{found on Greg Wright Architects}.

When designing the Torquay House, Wolveridge Architects focused on ways to challenge the traditional approach applied to coastal homes. Their strategy included a wooden staircase framed by two woven screens designed to offer privacy and to capture the character of the home.

Wood screens can take many different forms, featuring a variety of styles. One example is a simple divider that uses four posts and a series of thin horizontal fins which together form a staircase screen that combines rustic and modern elements.{found on bc-dc}.

This wood staircase screen is interesting for a variety of reasons. Being adjacent to the entrance door, it was a mandatory feature. The fact that it features an opening suggests that the space underneath the staircase can be used in a lot of fun and useful ways such as a hiding space for kids.{found on baranstudio}.

When the staircase is positioned between the windows and the living area, it’s important to let light pass through to reach the whole space. This is why the staircase screen has to be just right in order to cover the safety element while also being transparent and good-looking.{found on setless}.

An interesting strategy is to link the staircase and the screen through design elements such as continuous patterns and matching details. In this case the screen becomes a continuation of the treads being spaced out the same way. The difference in color, however, identifies them as separate features.

Freestanding staircases need two screens which frame them and allow them to stand in a lot of great ways. A combination or wood find and metal rails allows these staircase screens to become the main focal point of the open floor plan.{found on seattlebydesign}.

A staircase screens that coordinates with other elements such as the floor or the wall is likely to blend in more easily and to contribute to an overall cohesive interior design. At the same time, the screen can stand out thanks to an eye-catching repetitive pattern.{found on surfprojects}.

It’s possible to combine several different strategies when designing the staircase screens for a house built on several levels. An interesting strategy is to employ different materials and designs for each floor, such as the large wood fins and the glass railing seen here.

A staircase screen can allow the space under the stairs to remain free in order to be used for storage. As a result, it would only cover the upper portion, being linked to the stairs. This screen is particularly eye-catching because of its solid construction and the random pattern of geometric cut outs.

In a similar way, the space underneath this staircase is incorporated into the living room’s design and the screen features a simple but at the same time eye-catching pattern which extends onto the adjacent wall divider.{found on rzowens}.

A full glass screen can be a good option if you want to let light through. A metal frame can offer it the needed stability while keeping the design simple and modern. The strategy works well for contemporary and industrial interiors.{found on nicolastyearchitects}.

Custom design strategies have to be employed in order to get the desired results. For example, these two staircases are connected by glass walls and the result is a continuous design that links the interior space to the outdoor terrace. The interior staircase also features an elegant screen with a built-in picture ledge.{found on batesmasi}.

Some staircase screens focus on visually-interesting patterns such this graphic design obtained using thin metal rods. It goes really well with the industrial structure of the staircase.{found on phtr}.

When the staircase screen is not designed to stand out, other elements can take on this role. For example, the orange handrail is the main focal point in this particular case.

As a general rule, the role of a staircase screen is to reflect the overall character of the interior design and to become a natural part of the décor even when it stands out in a dramatic way. It has to find the right balance between looks and functionality.