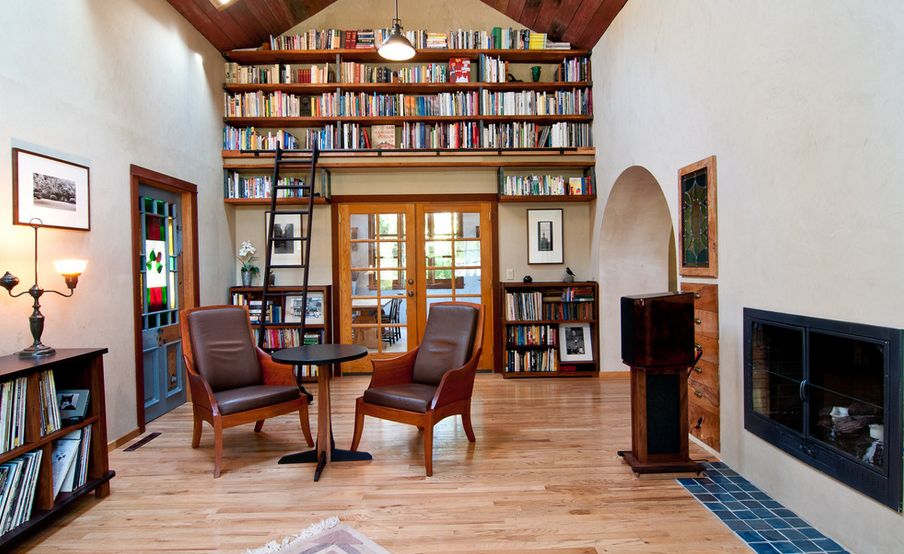 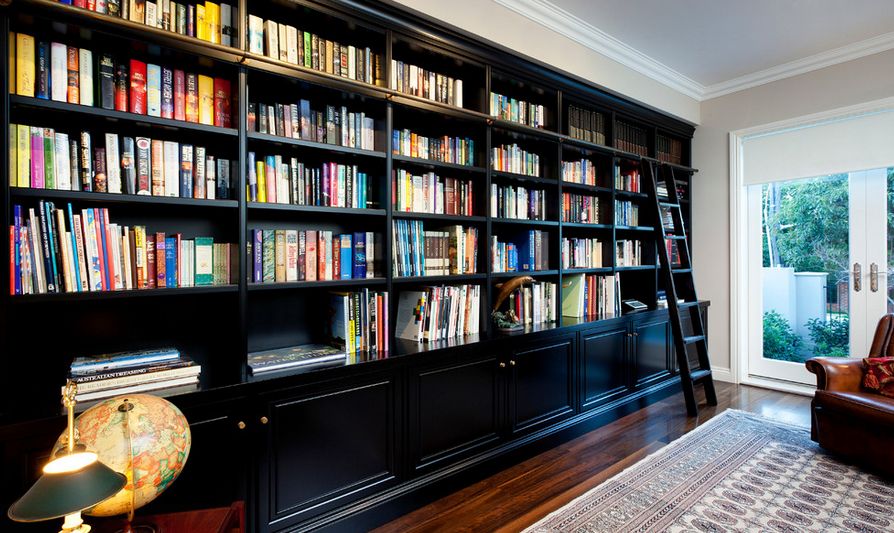 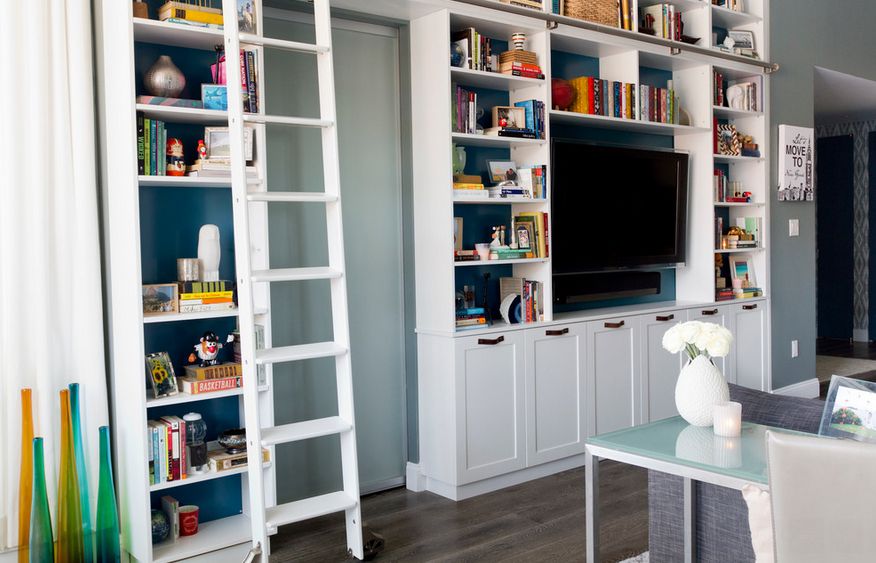 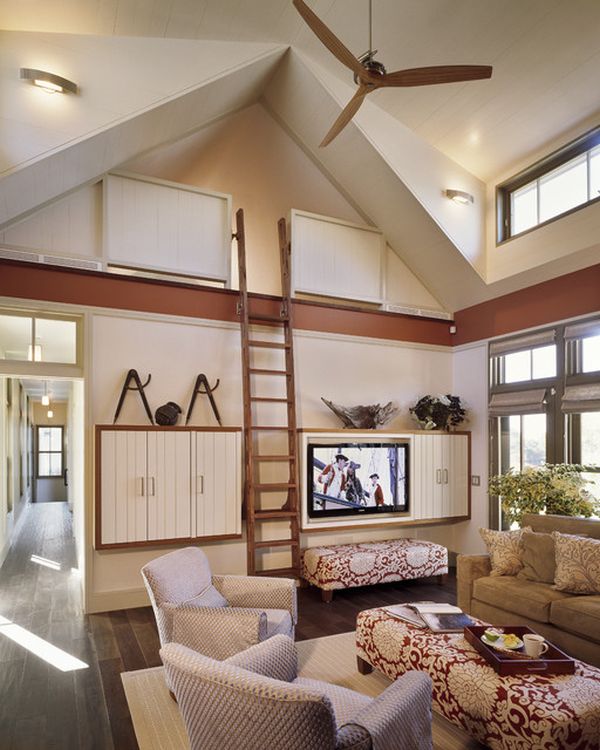 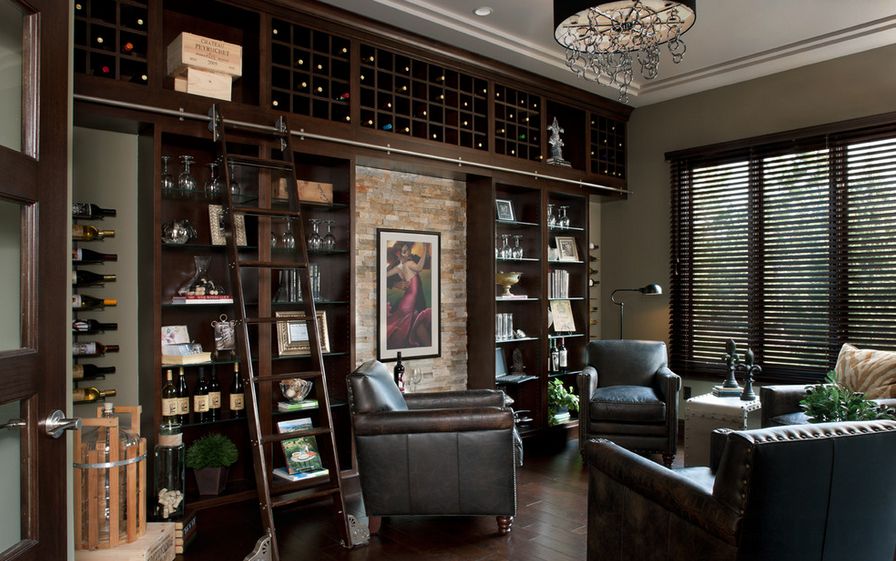 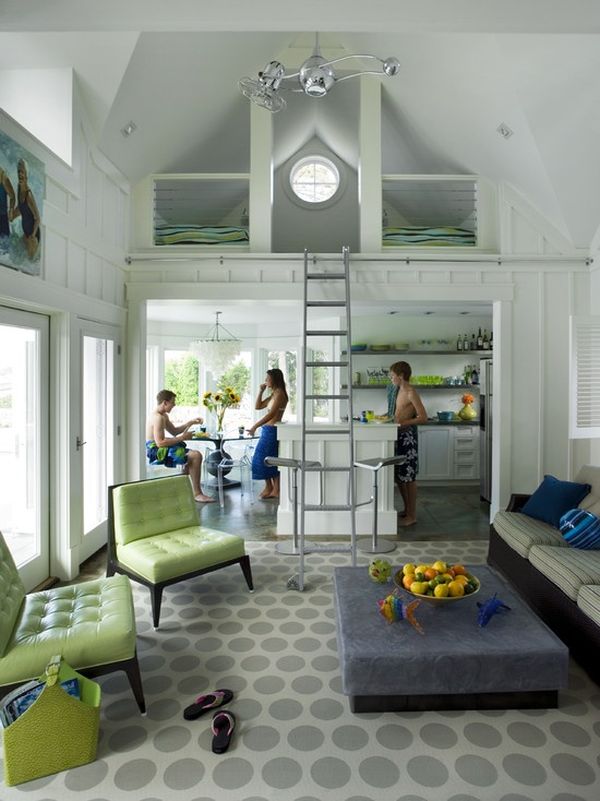 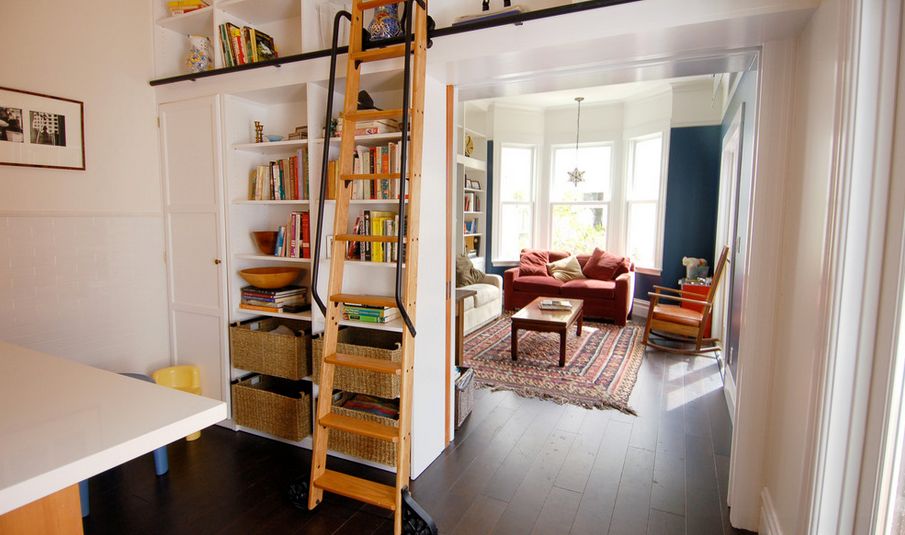 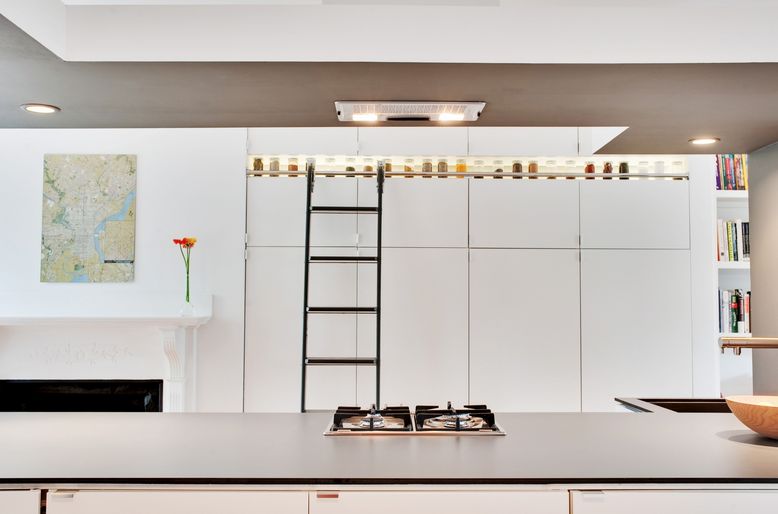 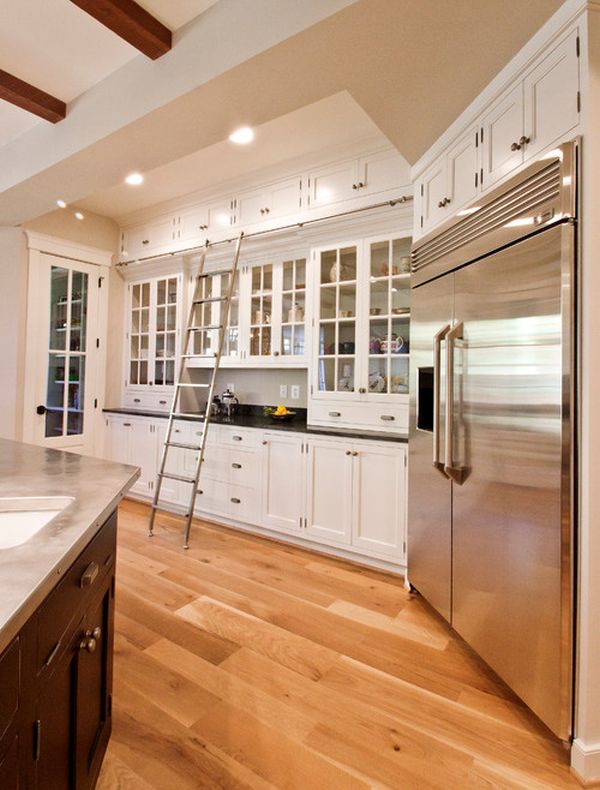 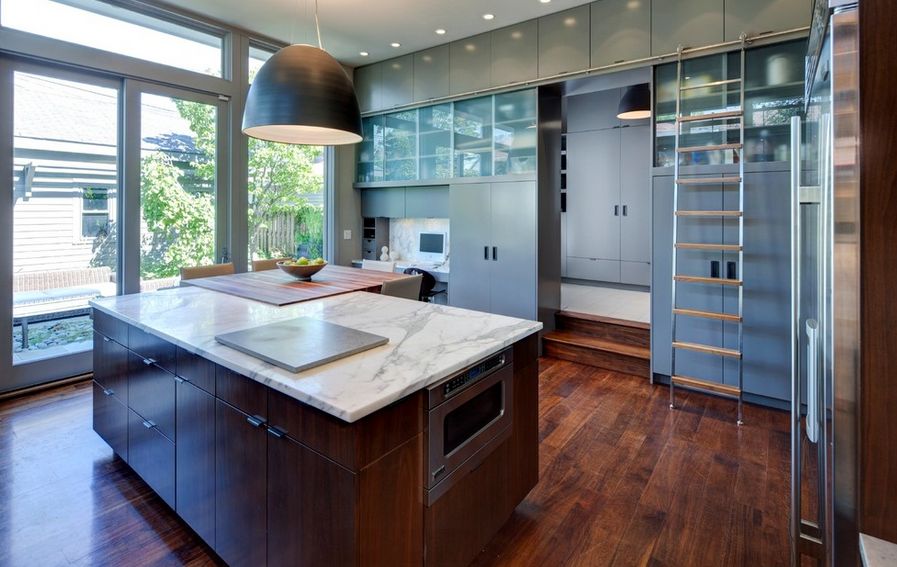 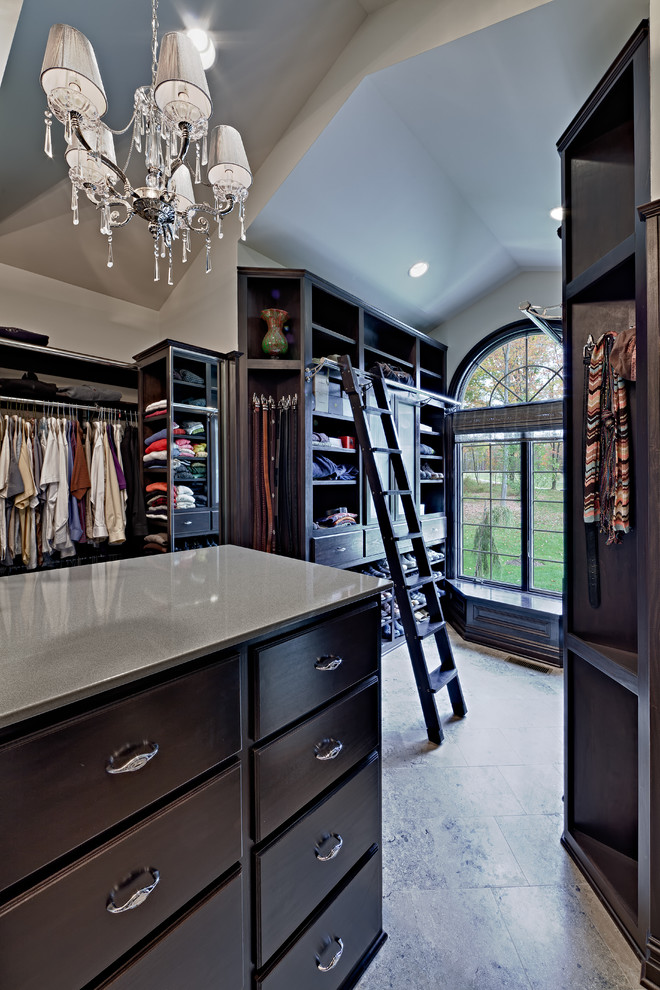 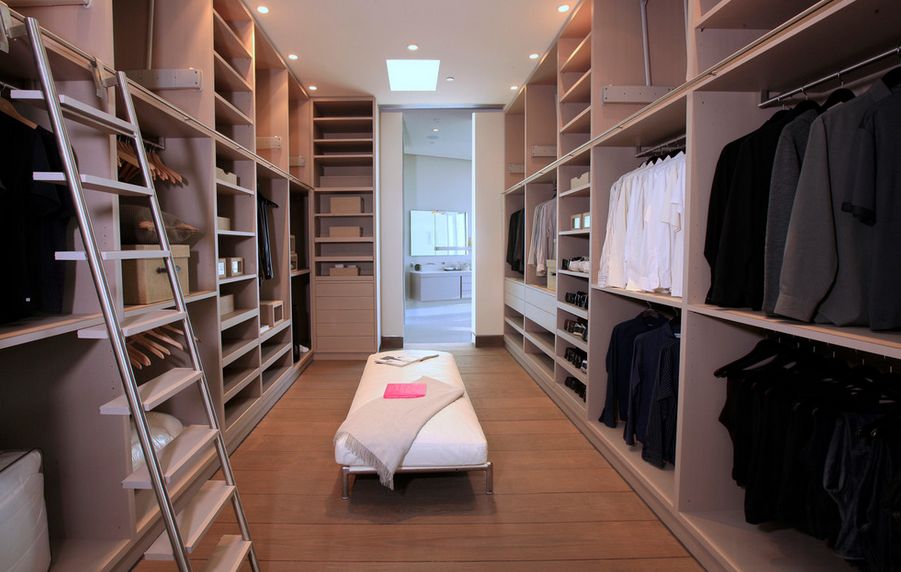 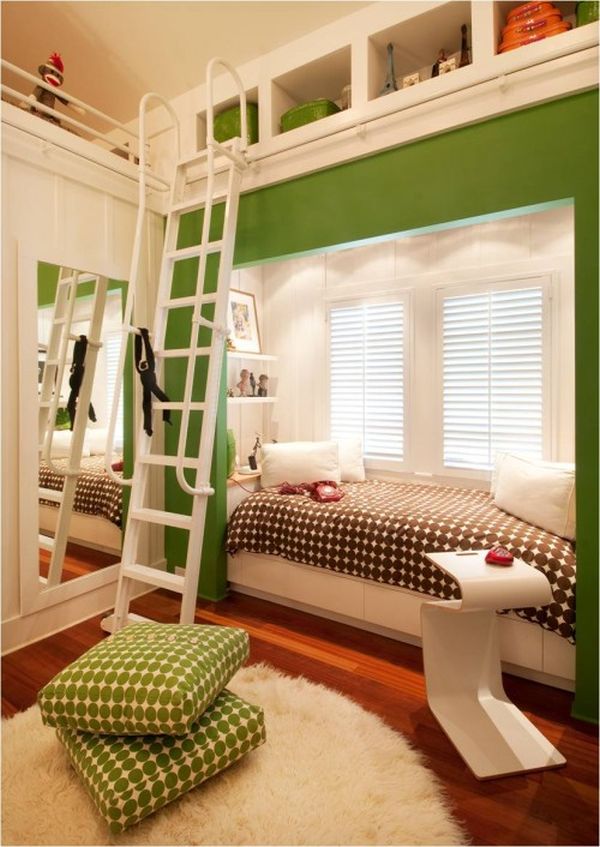 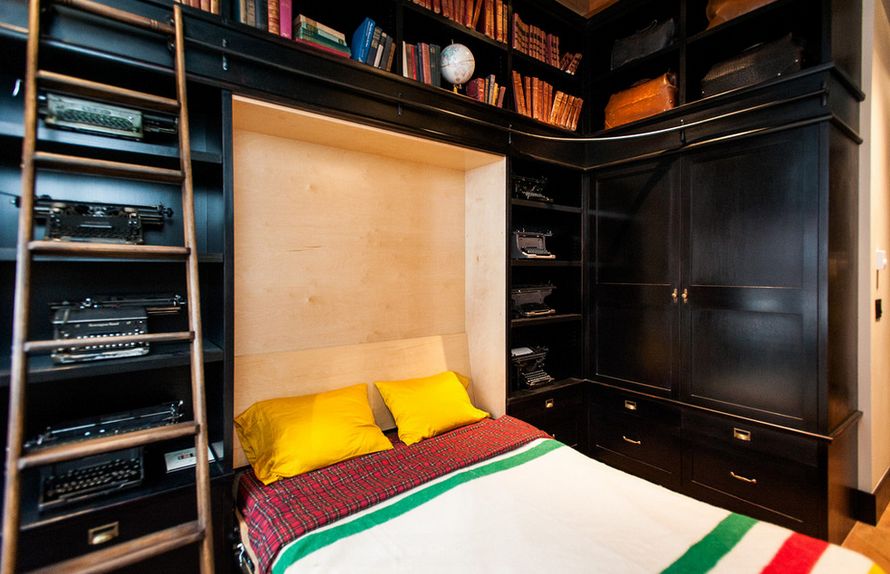 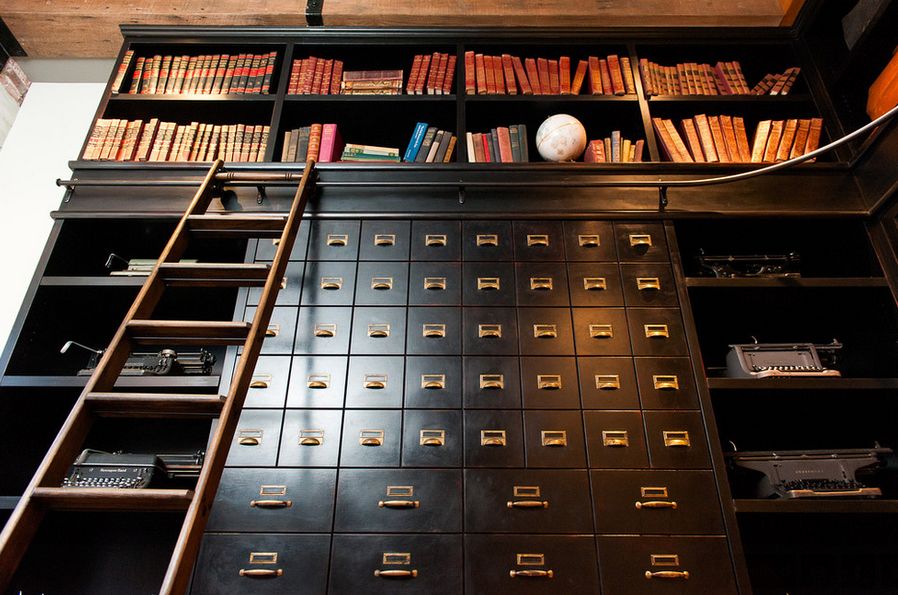 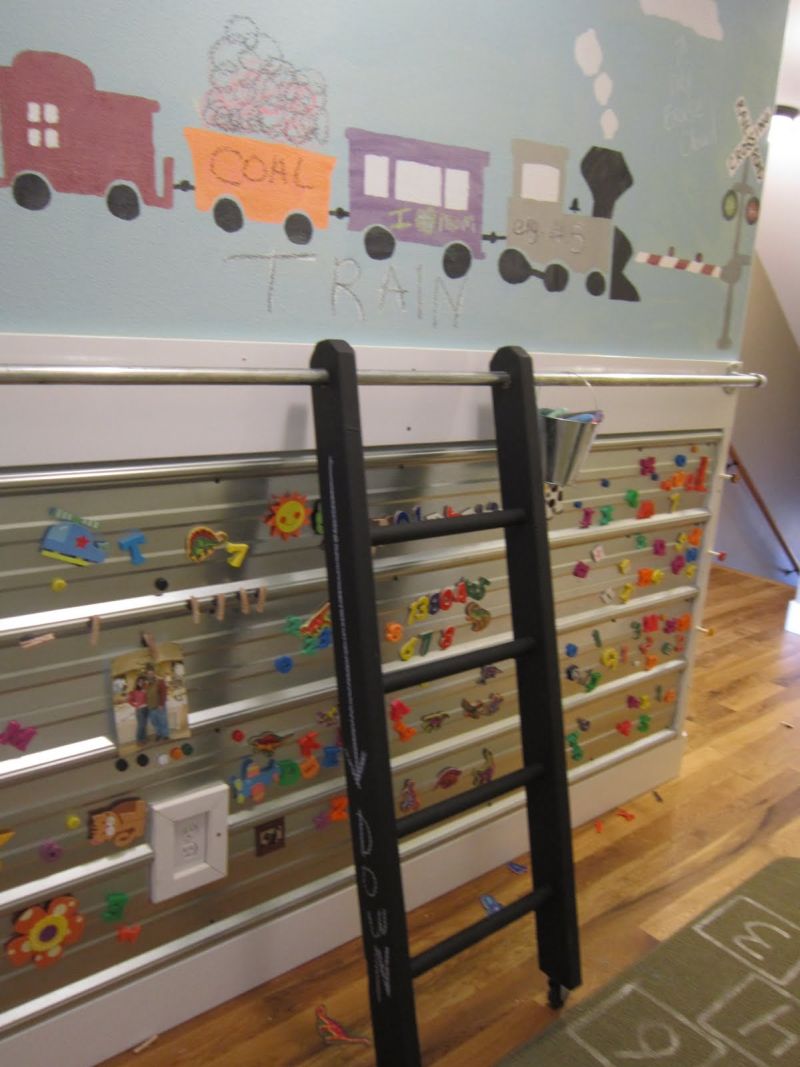 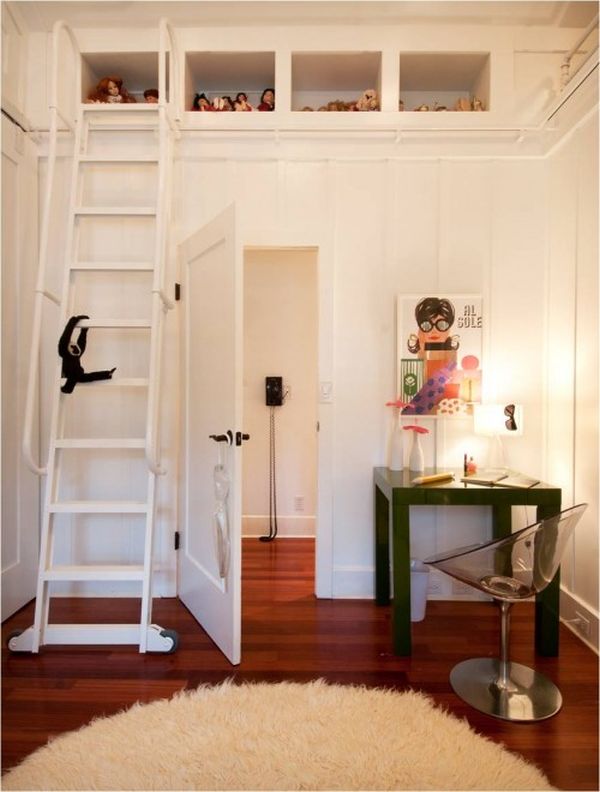 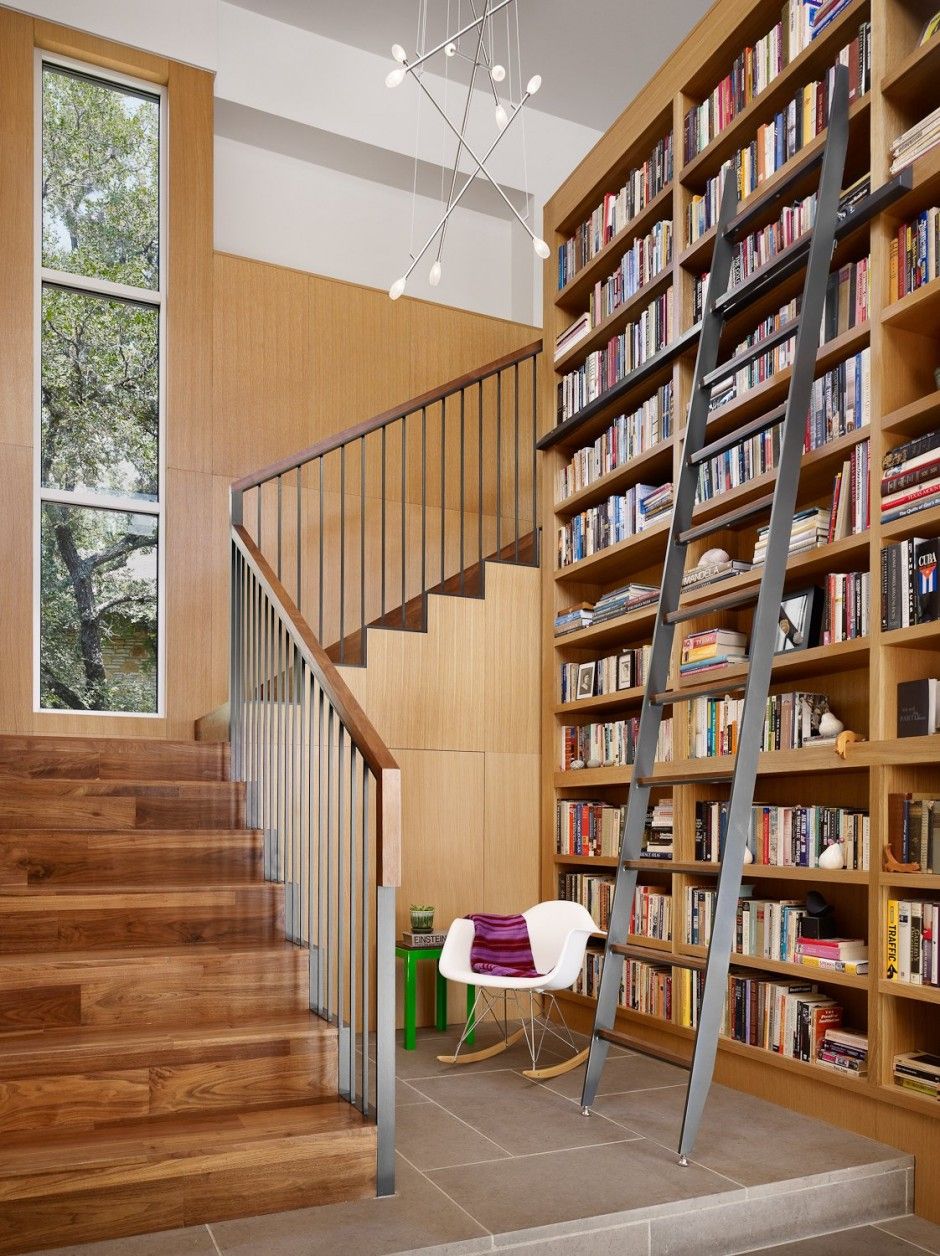 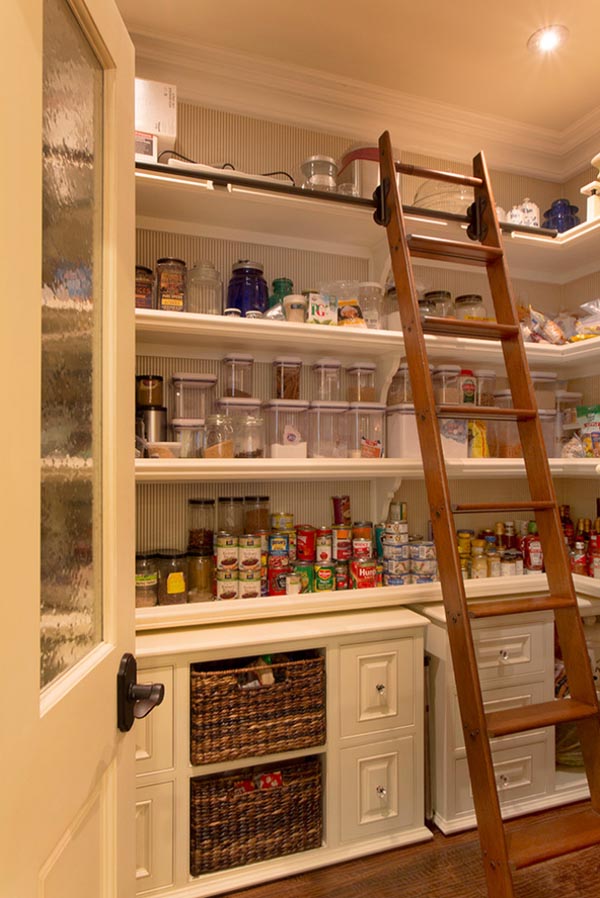 Library ladders are not generally used in other types of spaces than…well..libraries. But doesn’t mean they can’t also be used in a home for example. In fact, they’d actually look very interesting there because of this very fact. So how exactly would one include a library ladder in their home? There are more possibilities than you think.

In the home library.

The first obvious choice would be the home library. It’s a library ladder would fit naturally, especially if the room had a high ceiling and shelves that go all the way up. In fact, a library ladder would allow you to save plenty of space by mounting the bookshelves high on the wall and using the bottom portion for something else.{found on louiselakierphoto}.

In a home library or office such a ladder actually makes a pretty natural addition. If anything, if makes the space look more professional.{found on butlerinteriors}.

A similar approach could also be used when designing the living room. The bookshelves can be mounted above the doors and windows or they can wrap around them and a library staircase can be attached to offer access to these upper areas.{found on rikkisnyder}.

In the living room, the ladder would also be an interesting décor piece apart from being functional. You can use it to create symmetry in the room or to simply create an interesting focal point.{found on interiorsstudiomv}.

Surely, books aren’t the only things that can be stored high on the living room walls. Another great idea is to mount wine racks under the ceiling to create a great design for the room.{found on moceri}.

A large family needs a lot of space and sometimes requires us to be really ingenious when designing our homes. The traditional approaches almost never work. You have to be able to see space where there’s none like above this kitchen for example.{found on svdesign}.

Technically, this ladder is not part of the living room but it’s close enough. This is a nice example of how you can use the space in between the rooms or the walls to maximize the storage in your home.{found 0n matthollis}.

Kitchens need lots and lots of storage space but the problem is these spaces also need to be accessible and if they’re too close to the ceiling they become less user-friendly. But you can solve the problem by using a library staircase in the design.{found on bunkerworkshop}.

With this type of design you can make the most of your kitchen and include as much storage as you can. You can even use the space above the fridge or above the door.{found on cameokitchensonline}.

Even if the kitchen is large and spacious, it doesn’t hurt to use the space efficiently. The library staircase allows you to do that while also maintaining a simple décor with all the cabinetry organized along the walls.{found on fricanoconstruction}.

Library ladders can also be used in dressing rooms to access the upper shelves on which you can keep off-season clothes or accessories.

Outfit all of the upper shelves with rails on which to attach the ladder to get easier access. This way you can only have one ladder for all the shelves.{found on joshbrowndesign}.

Whether it’s the master bedroom, the kids’ room or the guest room, you can keep the floor clutter-free by looking upwards and using the space above the windows and doors for storage. For example, this is a lovely window nook with storage above.

If you place the ladder by the bed then you’ll also be able to use it as a nightstand. So simple and so clever.

But what you don’t know is that this is a murphy bed and that the room can instantly transform into a home office.{found on beyondbeige}.

In the kids’ bedroom or playroom, a library ladder can also be used for other purposes, not just for storage. For example, design an activity wall on which the kids can draw and use a sliding ladder to let them reach the upper portion of the wall.{found on girlinair}.

Save floor space by relocating the storage cabinets and shelves up on the walls or even inside them. These carved nooks above the door are great for storing and displaying toys and the ladder makes it all fun.

Don’t waste any space in your home. Turn the tiny nook by the staircase into a reading corner. The staircase wall be a tall bookcase with a ladder to help you reach the upper shelves and all you need to add is a comfy chair and a tiny side table.{found on chiocodesign}.

Pantries are usually rather small and the number of things that could be stored there is huge. It’s why you need to perfectly organize this space to make the most of it. Keep the items you use only occasionally on the upper shelves and everyday supplies can be kept on the lower ones. And if you’re worried you won’t be able to reach those items, include a library ladder in the design and it too can be used for storage.{found on theasegaldesigns}.