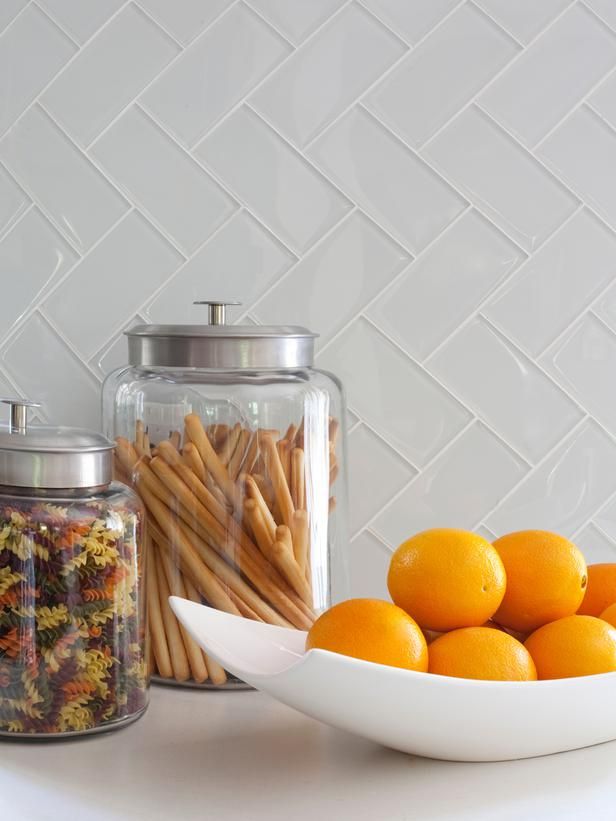 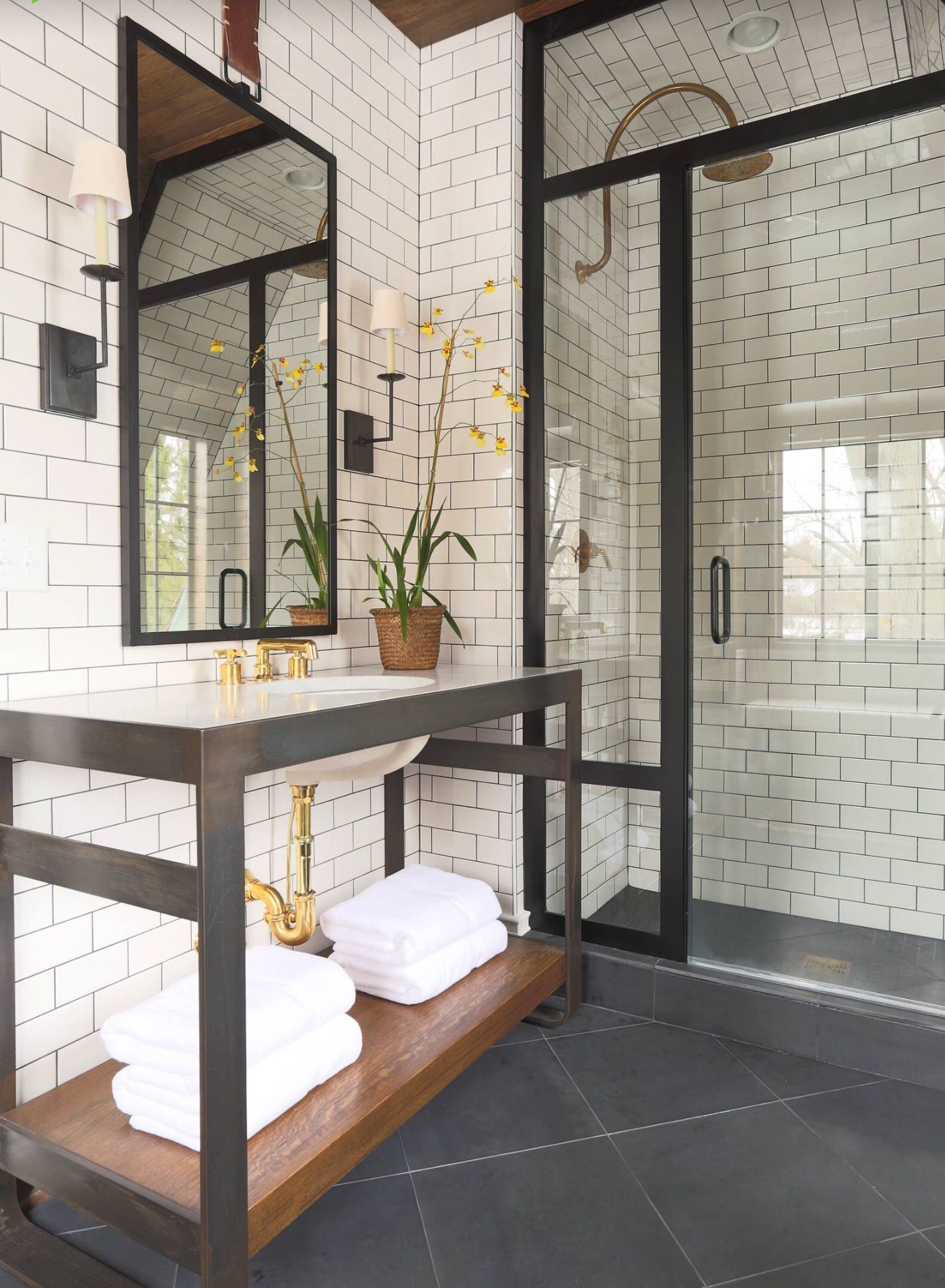 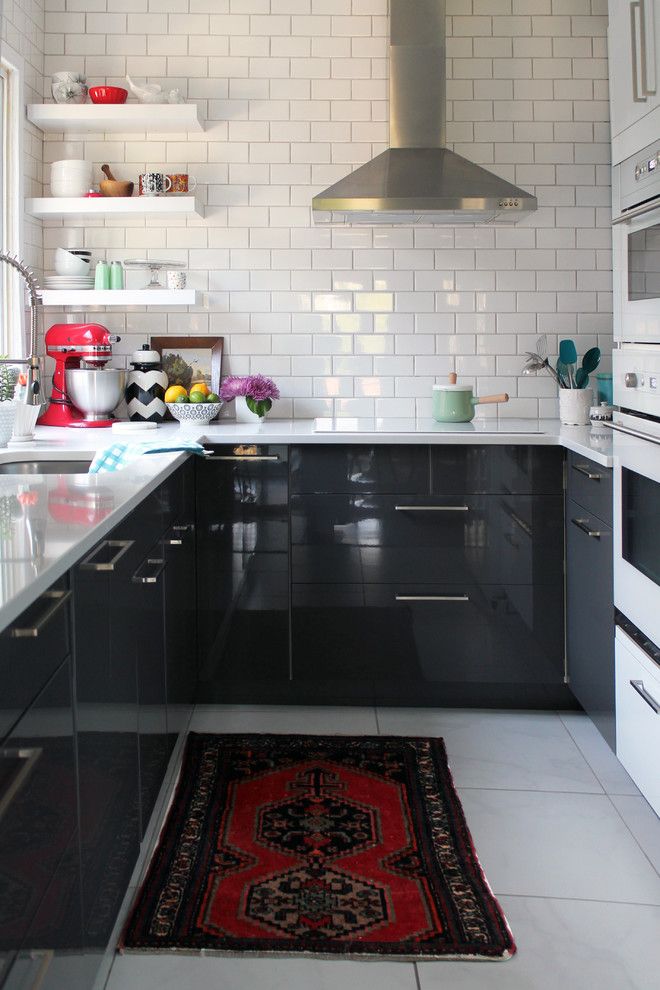 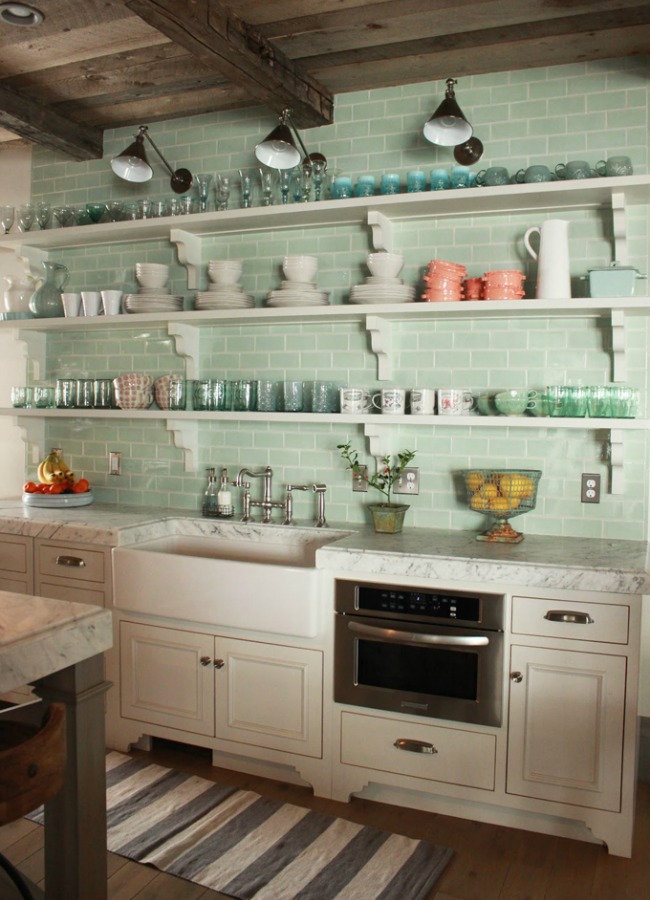 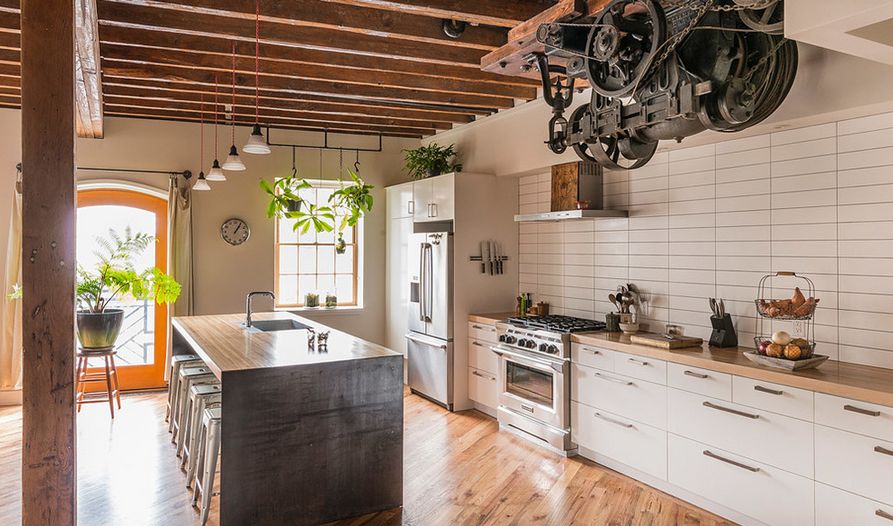 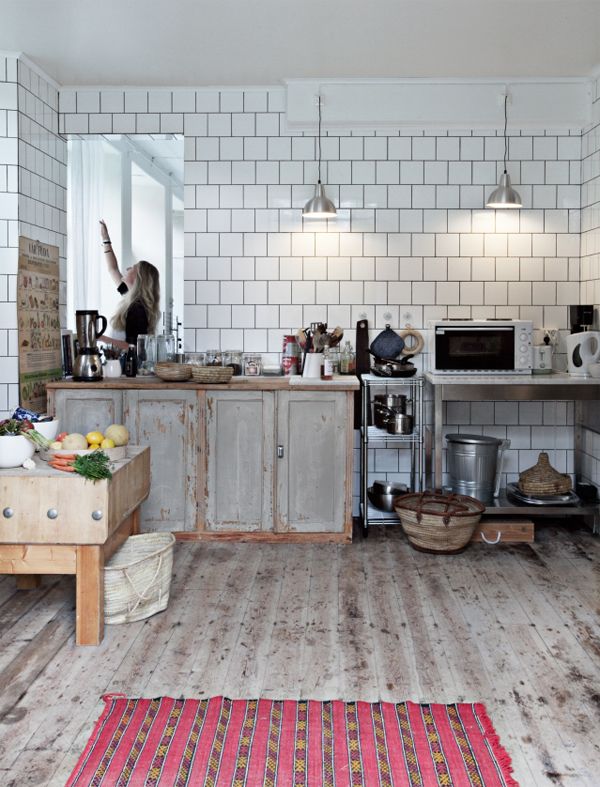 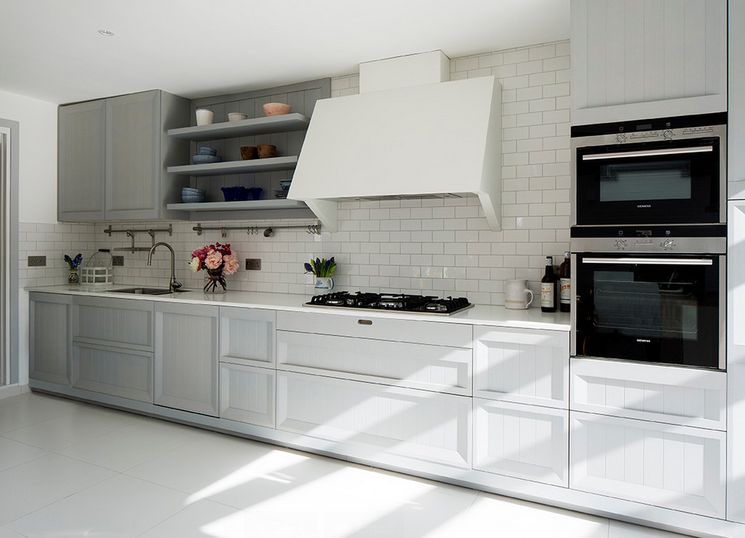 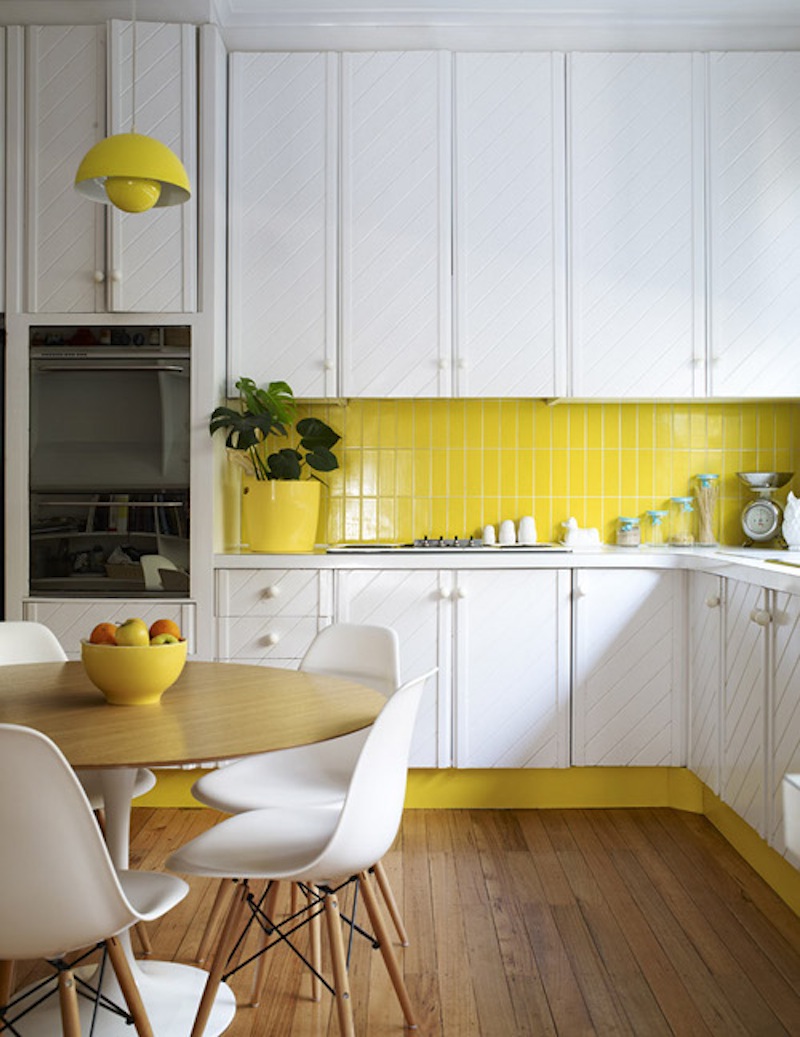 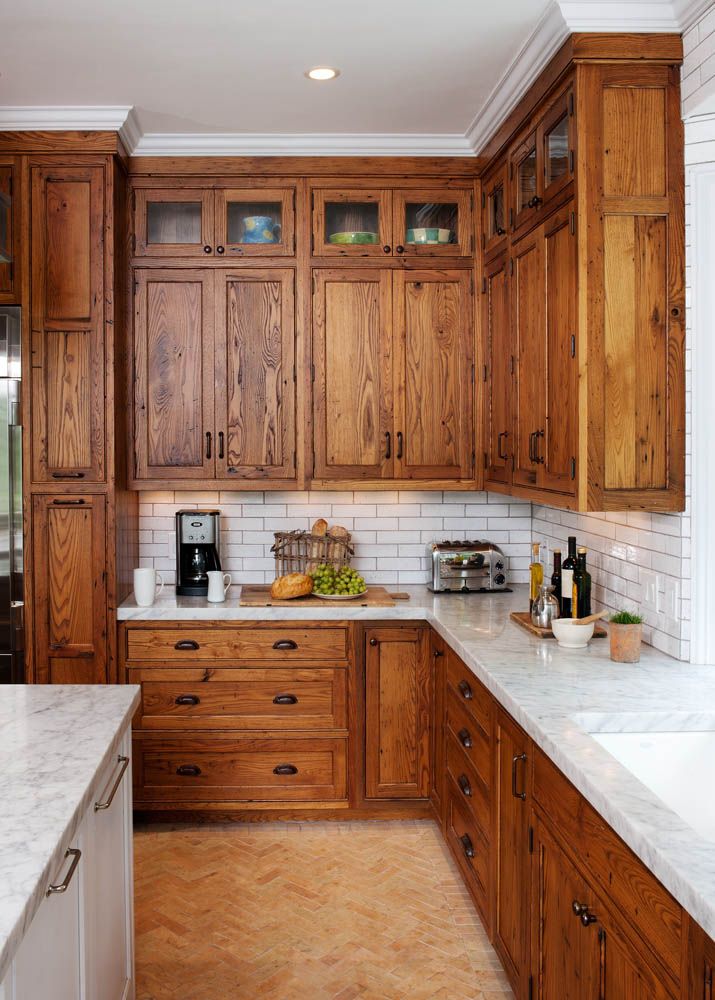 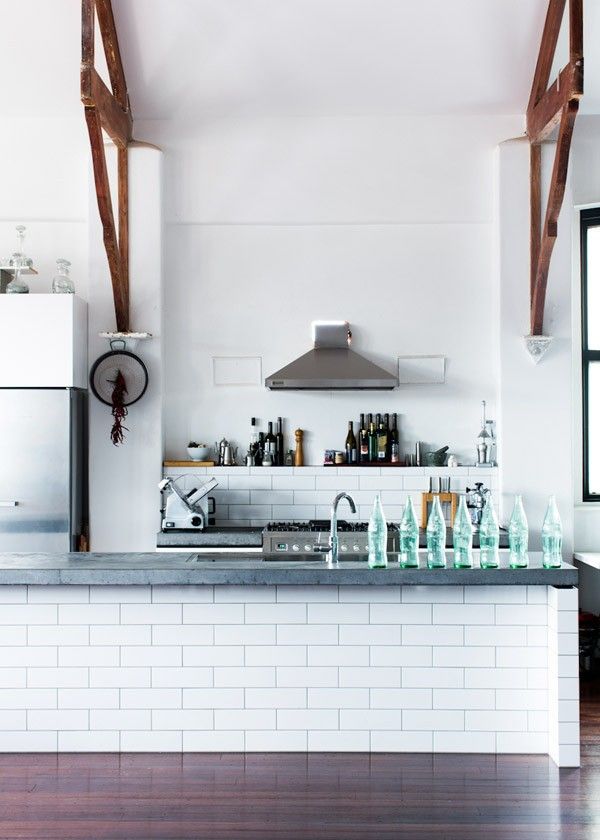 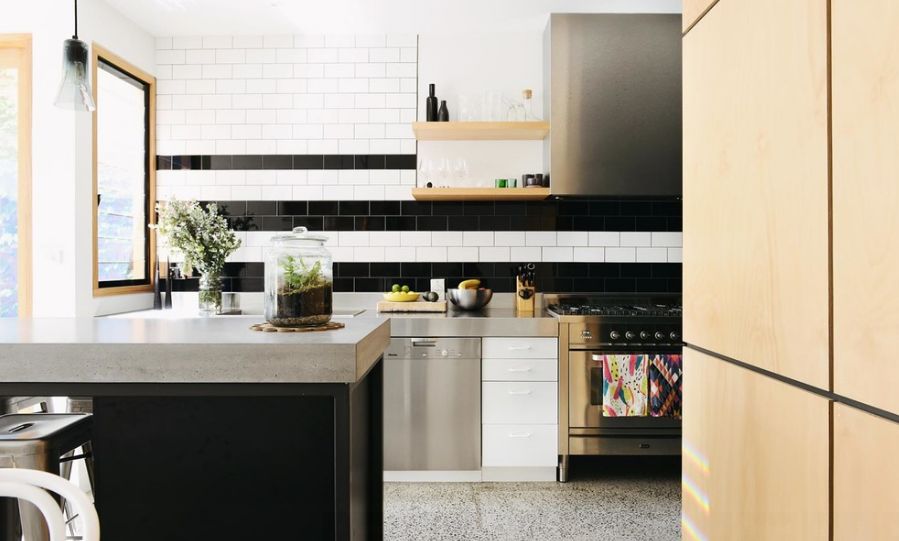 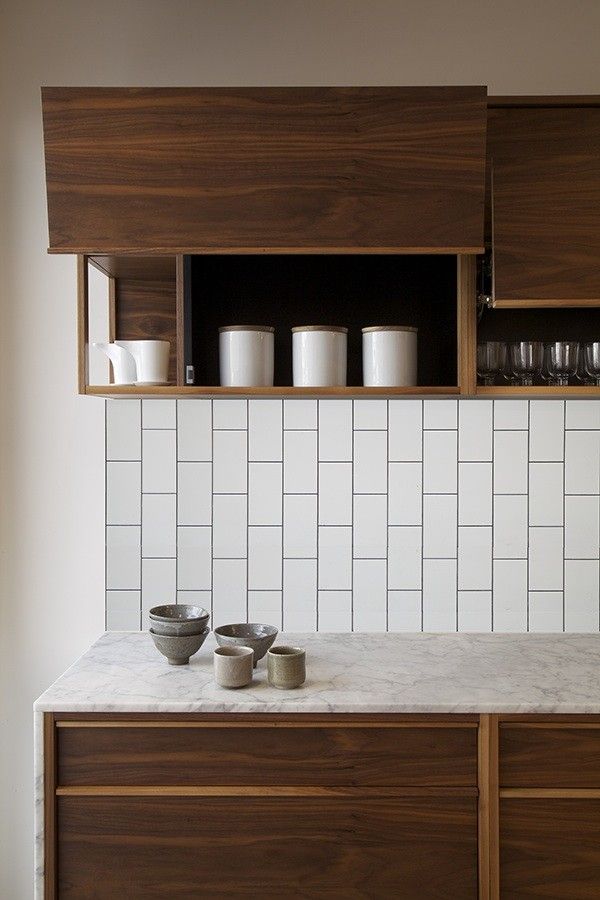 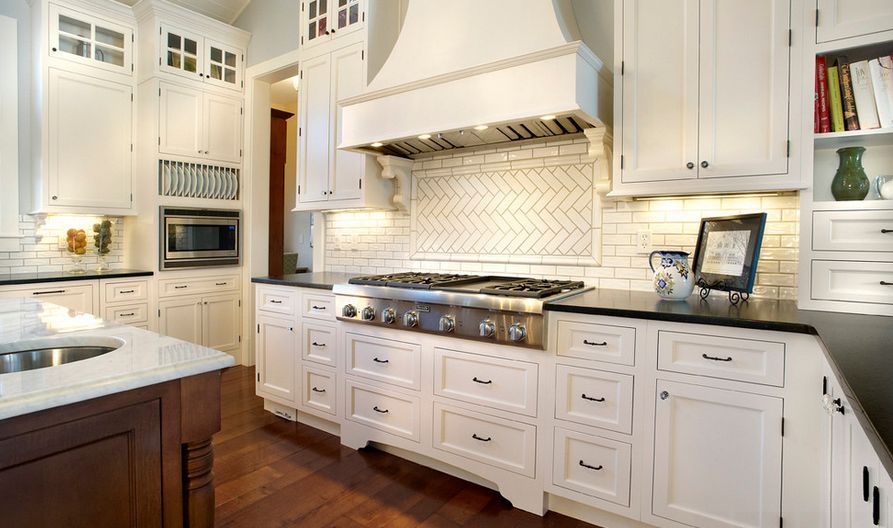 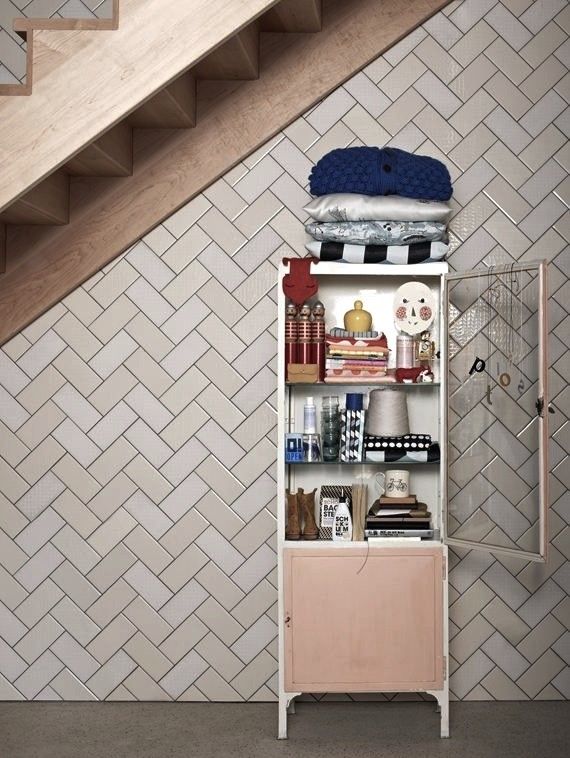 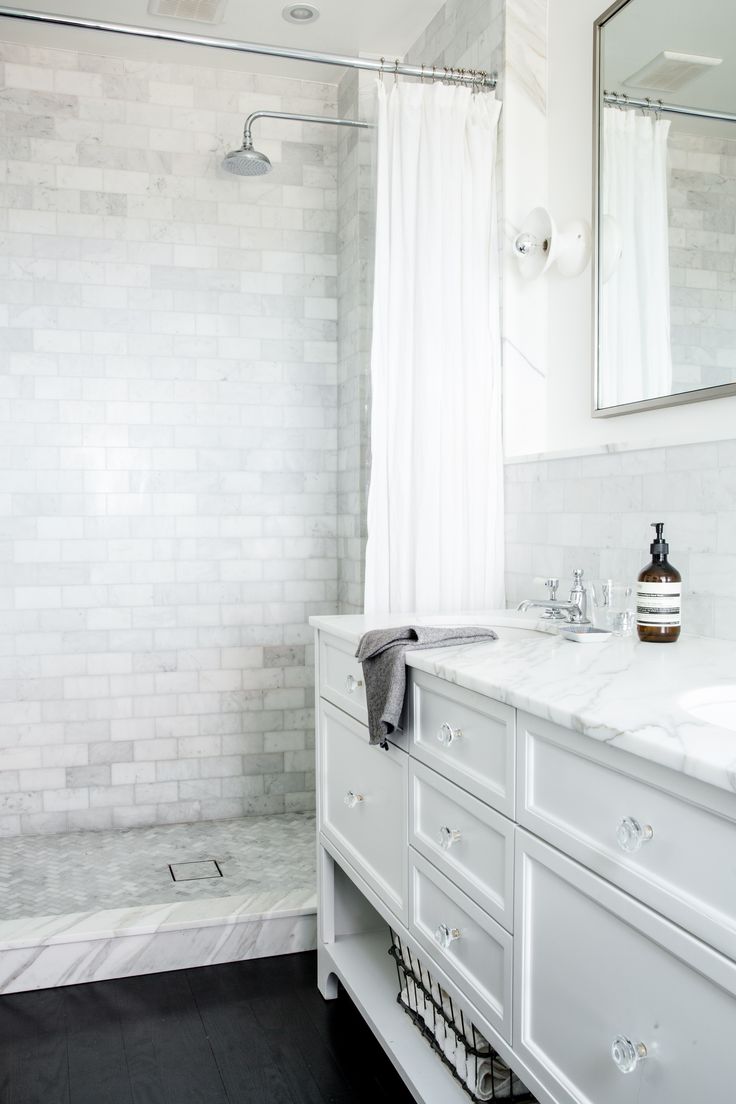 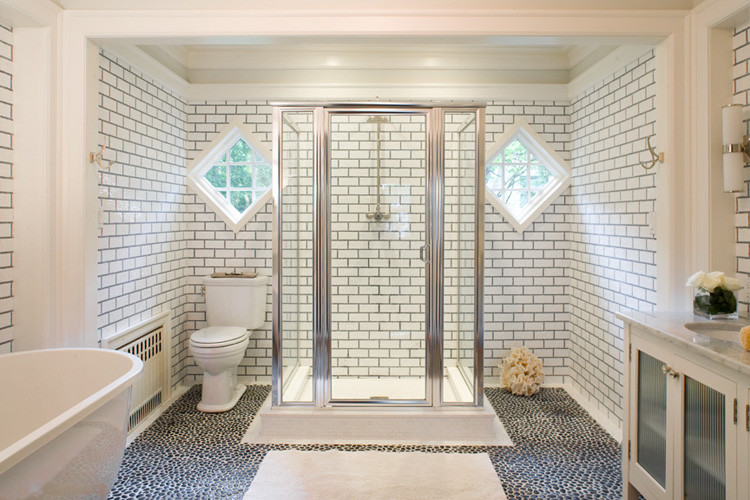 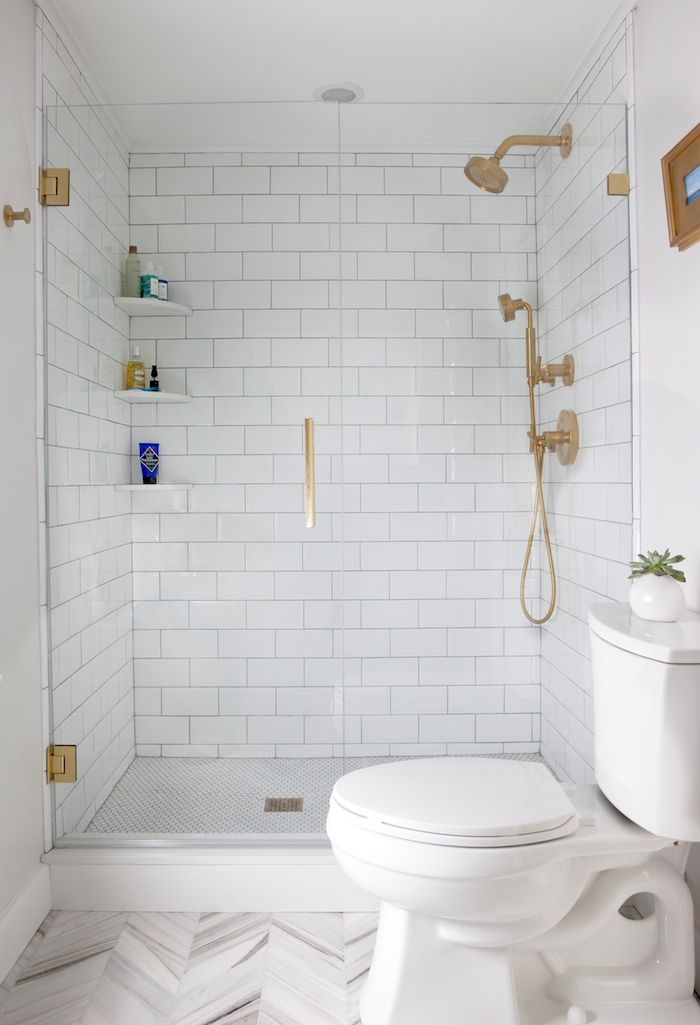 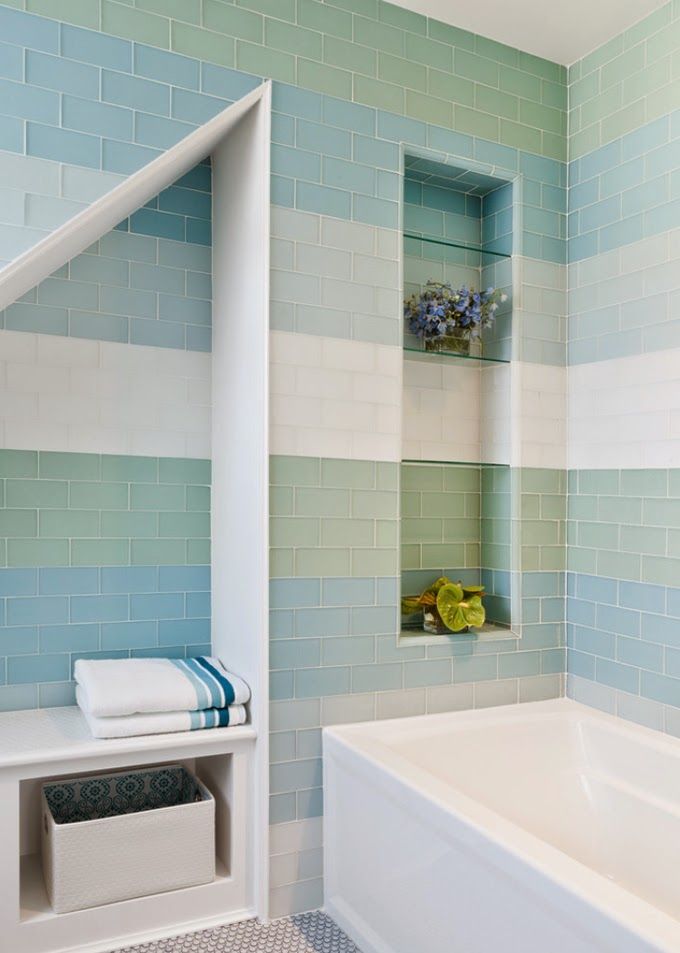 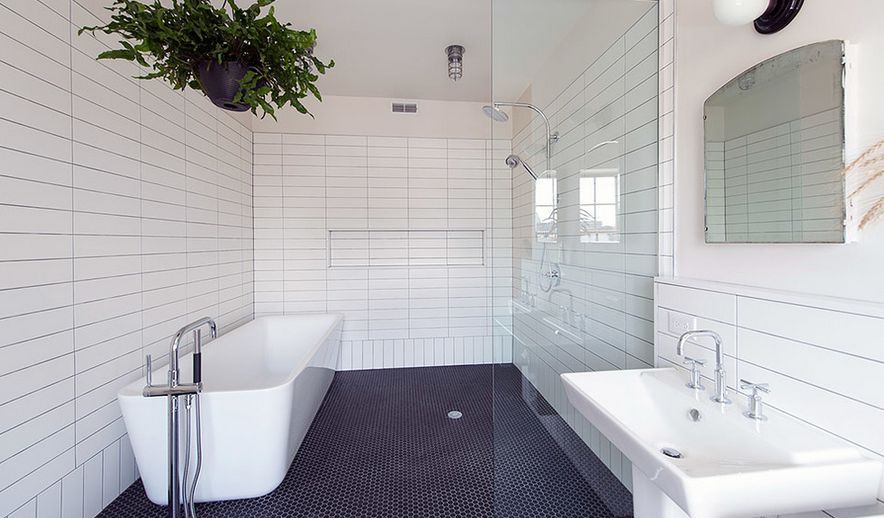 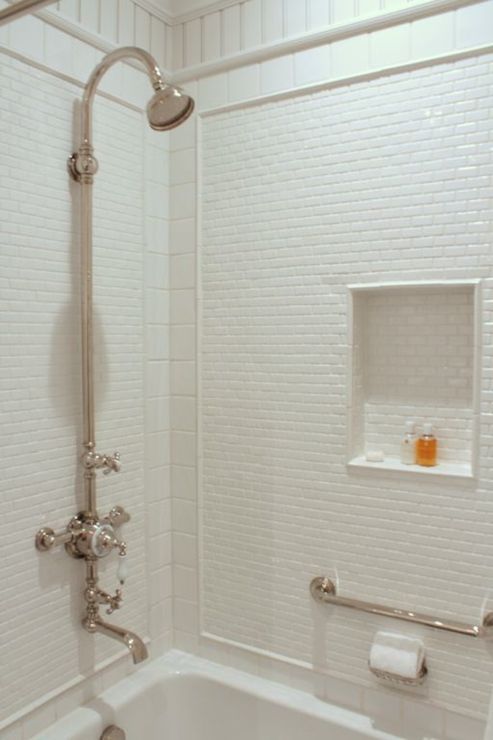 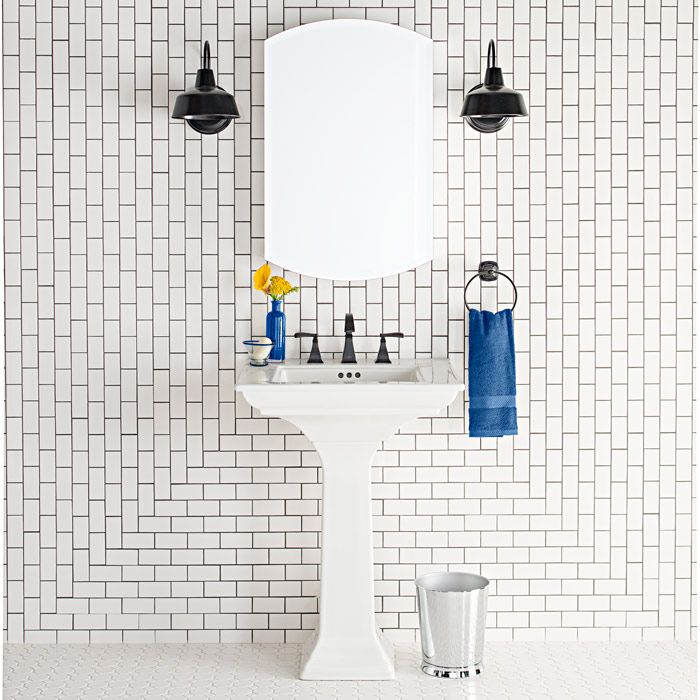 Subway tiles have quite a design history, having been around for an exceptionally long time. Part of their appeal is the clean, contemporary look while retaining a bit of visual charm with the tiled look itself – laying subway tiles in a space is a nice way to keep the background subtle but still interesting and chic.

While white subway tiles are probably the first visual we think of when we think “subway tile,” there are actually many variations on laying subway tile that are beautiful and functional. Here are some gorgeous cases of subway tile gone incredibly right.

Glossy white subway tile is laid in a traditional install in this kitchen. The glossy sheen works well with the ebony lower cabinets, reflecting plenty of light and balancing out the dark color. The horizontal layout also adds a bit of width, visually, to this end of the narrow kitchen.

Elongated white subway tile (4” x 16”) as the backsplash to a white-and-wood kitchen provides a subtle yet unique foundation to a simple yet contemporary kitchen. We like how the longer individual tiles mimic the long, flat cabinetry. Plus, the straight stacked layout looks clean and concise.

One variation on laying subway tiles actually involves square tiles. They mimic the look of subway tiles because of their installation in a running bond pattern. The grey grout used here emphasizes the pattern and downplays the actual shape of each tile. This is a unique twist on an old classic!

A simple white subway tile backsplash provides just enough visual oomph in an all-white kitchen. We love the subtle detail of the subway tile’s white grout – the pattern is noticeable, but only just. In a monochromatic space, such as an all white kitchen, white subway tile adds a feeling of texture without additional textiles or accessories in the space.{found on ardesiadesign}.

Colored subway tile, such as is used for this this cheerful yellow backsplash, adds permanent color to a space that is easy to clean and much more visually interesting than mere paint. We like the decision to lay tiles vertically here – it’s a subtly charming look in this sweet kitchen space.

When integrating warmer materials into a space, such as wood in this kitchen, subway tile plays a key role in the overall seamless look. A warm grey grout adds some depth to the tile and coordinates well with the nearby knotty wood grains. We like how the subway tiled walls are broken up by other architectural details – chunky wood open shelves or a large cottage window.{found on crown-point}.

Ever considered shaking things up a bit with your subway tile install, and focusing the medium on the lower half of your space? This is an awesome variation of subway tile installation, and the effect is a surprisingly airy and spacious space. This is most likely a result of having visual elements (such as the subway tile) on the lower third of the space and fewer details as the eye travels upward.
Multicolored subway tile designs, such as these black and white subway tile stripes, are both aesthetic and vogue. We like how the dark black subway tile stripes become thinner up high; this helps to create an airy feel to the entire kitchen. The stripes themselves strike a bold look, so the look is beneficially tempered with blonde wood accents and neutral greys.{found on nestarchitects}.

Try installing your subway tile in a vertical pattern. This subtle variation adds height to a squatty space (such as a kitchen backsplash, which tends to be squished between the lower and upper cabinetry) and is different enough from the traditional horizontal subway tile layout to be a winner.

A herringbone pattern in the midst of the traditionally-laid horizontal subway tile backsplash creates an instant feature out of the kitchen range. Because the space above the stove is typically higher than the rest of the backsplash, and because this is a space that for safety reasons should be left alone, creating a visual sense of artwork with tile is masterful.{found on kristinpetro}.

A full-wall herringbone subway tile pattern is stunning. We particularly love the look against a staircase, because of the wall’s inherent diagonal aesthetic with the stairs themselves. The two angles play nicely together and create a definitely eye-catching effect.

To expand the prominence and presence of your shower, consider installing a subway tile shower surround. The horizontal layout of the tiles themselves make the shower feel wider, while the install from floor to ceiling expands the vertical presence of your shower immensely. This pale gray subway tile is a lovely choice for an elegant, contemporary bathroom, and its variation enhances the typical subway look.

Combine horizontal subway tile on all the walls of a bathroom to create a unified, sleek look. We love how the grey grout works so well with the clean lines of the glass shower surround…and who can get enough of the penny tile-esque stone floor? A perfect pairing in this subway tile bathroom.

For anyone wanting their shower to stand out, use subway tile as only the shower surround and not on the bathroom walls. Not only does this make a gorgeous, brass-fixtured shower a focal feature of the bathroom, but the white subway tile maintains the room’s crisp white aesthetic while also highlighting a gorgeous component.

Lay various colors of glass subway tiles in wide horizontal stripes around the room. This creates an ombre effect, but in a stunning, more sophisticated way than if you were to use simply paint. The glass tile in these gorgeous hues looks almost ethereal here. Love this strategy!

Lay the same subway tile that is used on the walls vertically around the lower wall to create a visual baseboard that is utterly warp-proof. This method is a great idea for a subway tile bathroom, where water might warp or stain other baseboard material options.

Who doesn’t love miniature stuff? If you, like so many of us, are drawn to certain items merely because their size is smaller than anticipated, you’re going to love this variation: mini white subway tiles. Because the tiles themselves are so small, there are many more of them than traditional subway tiles…and white (or very light) grout is likely the way to go so the look doesn’t become to muddled and busy.

Ultimately, we hope you have fun with your subway tile design. It’s a perfect medium to create a space of dreams no matter what your style, and as you can see it allows for unique variations that will truly showcase your personality and preference!