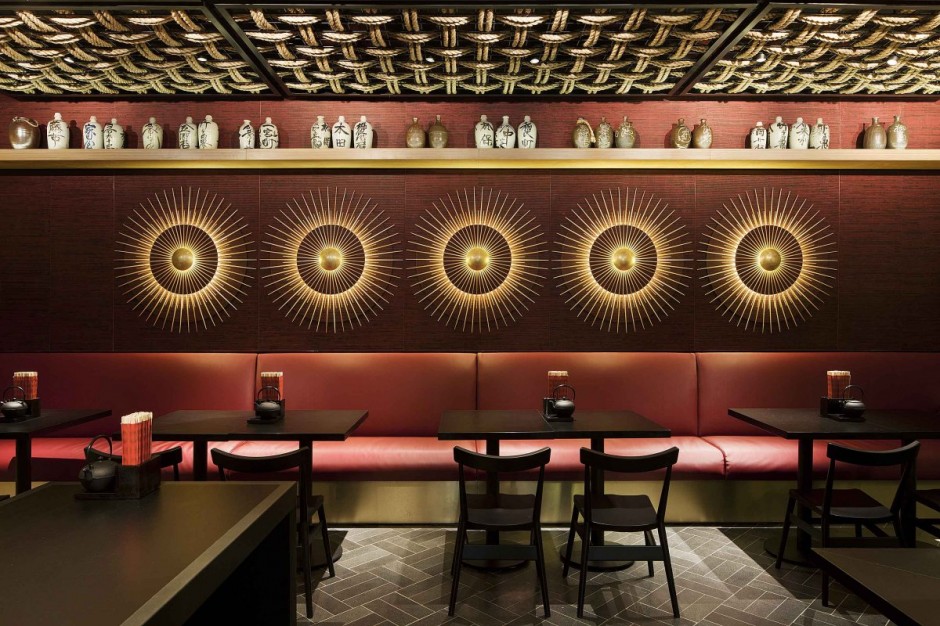 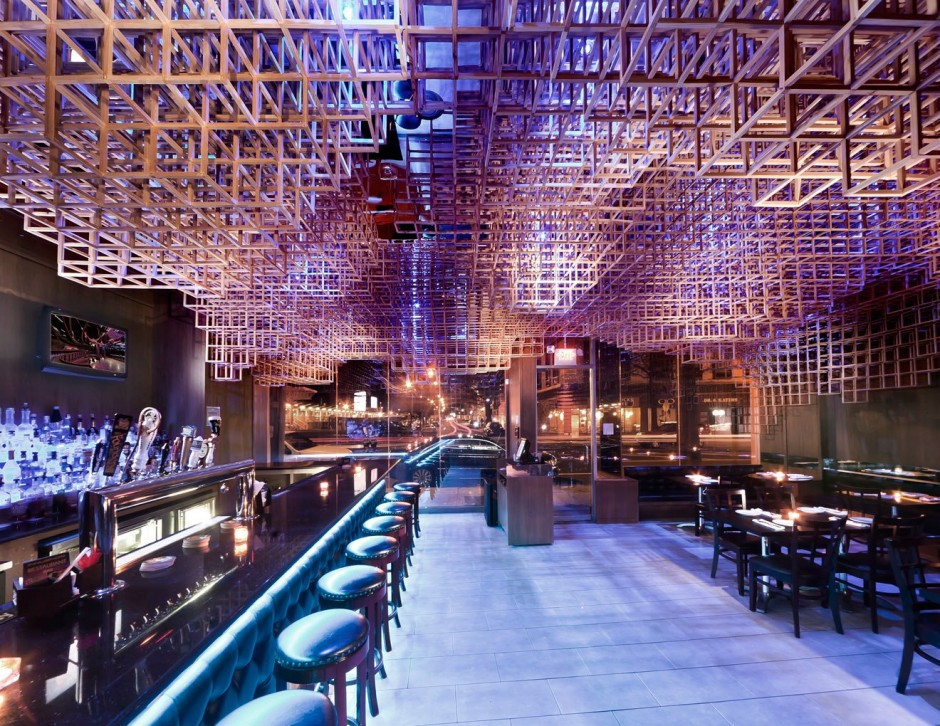 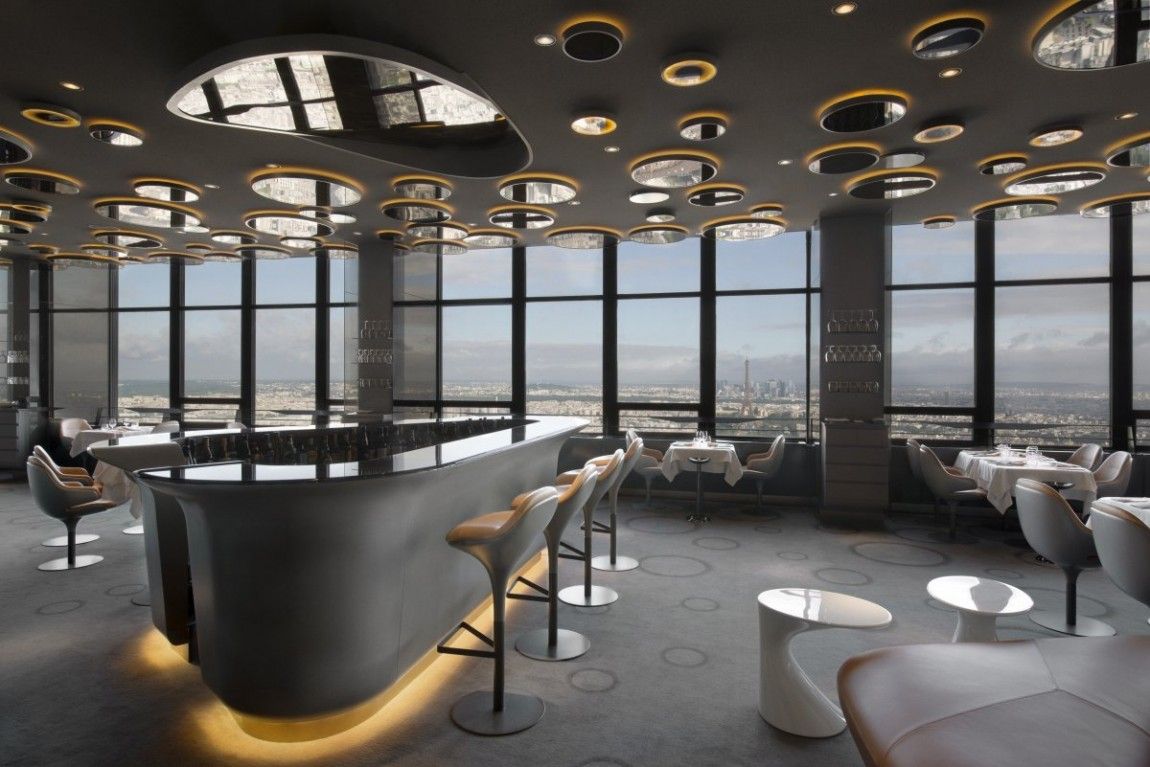 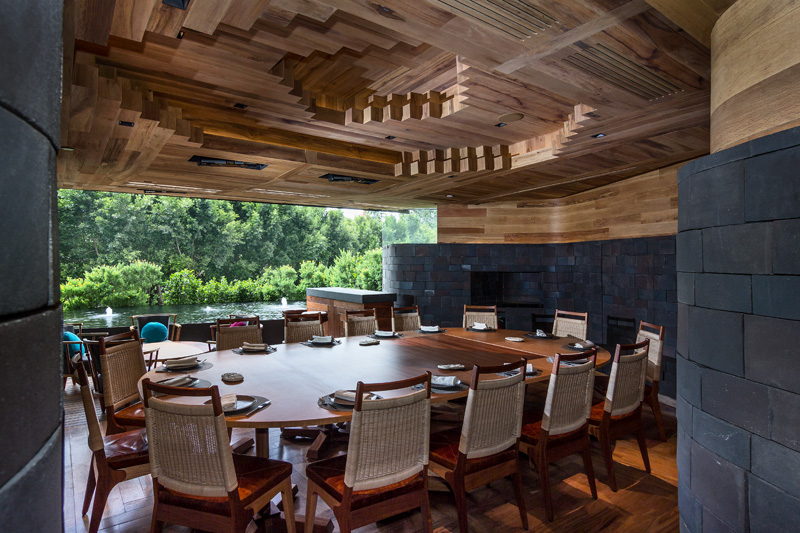 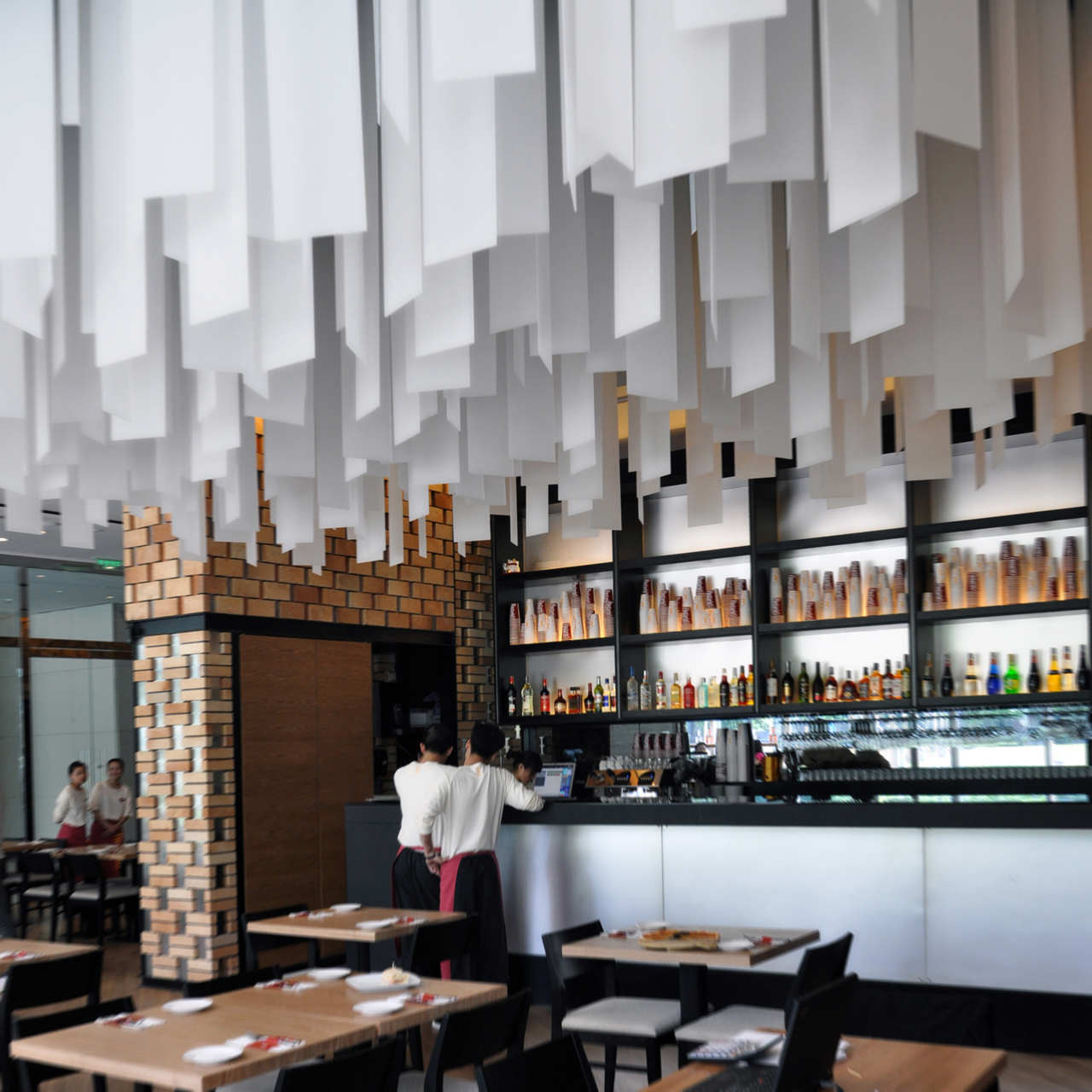 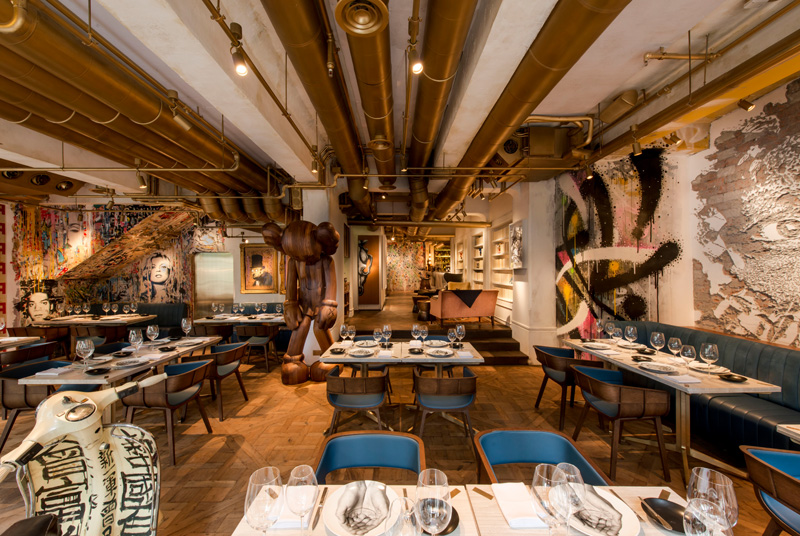 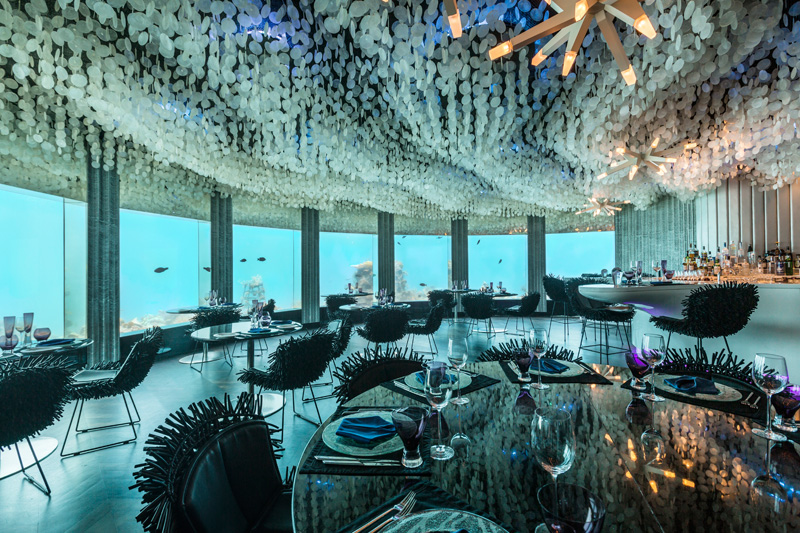 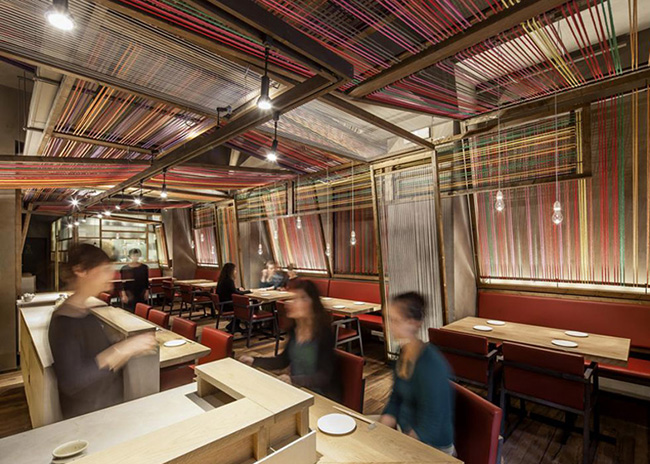 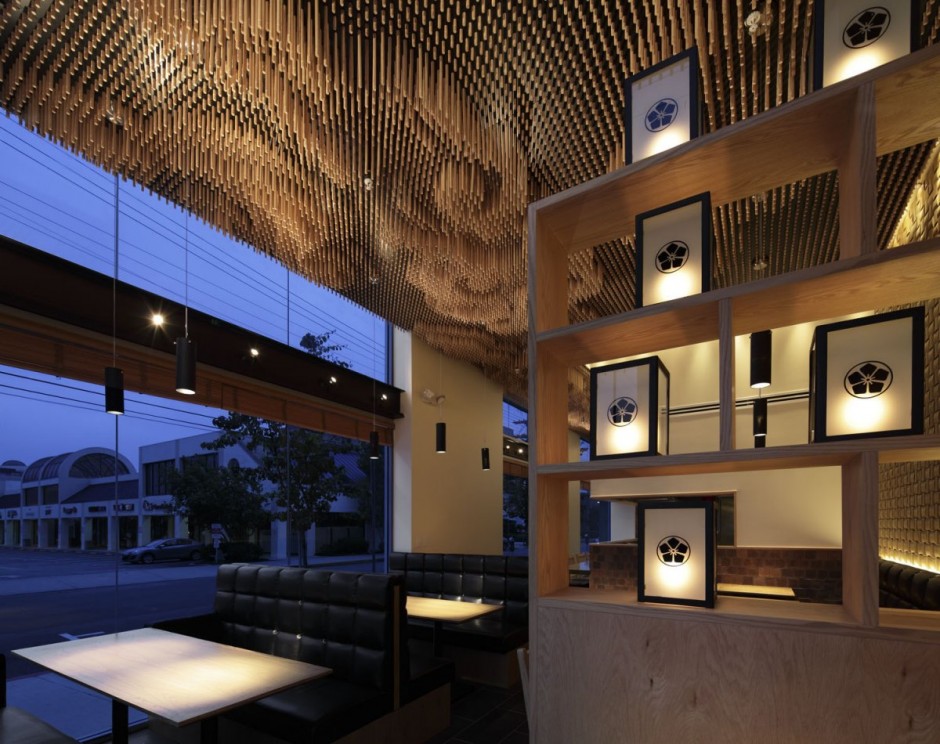 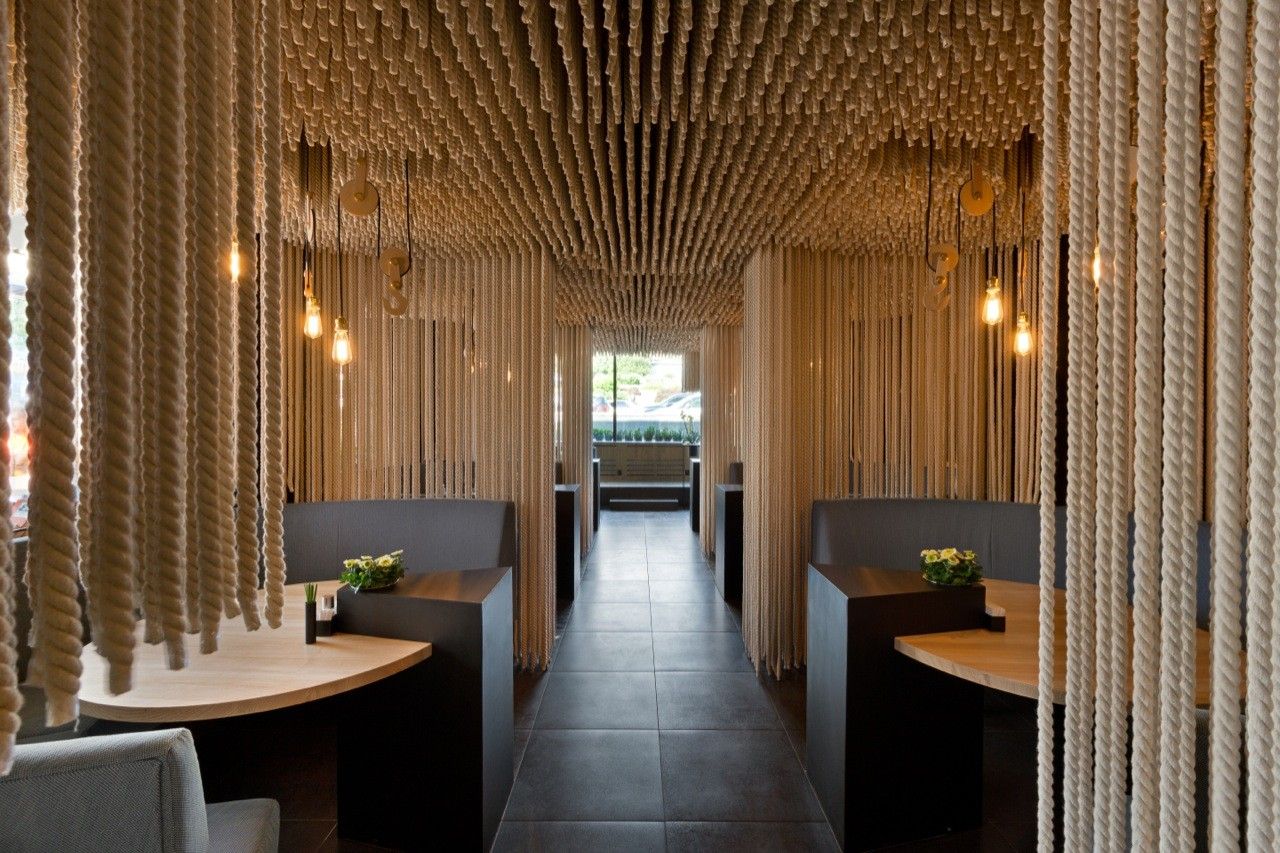 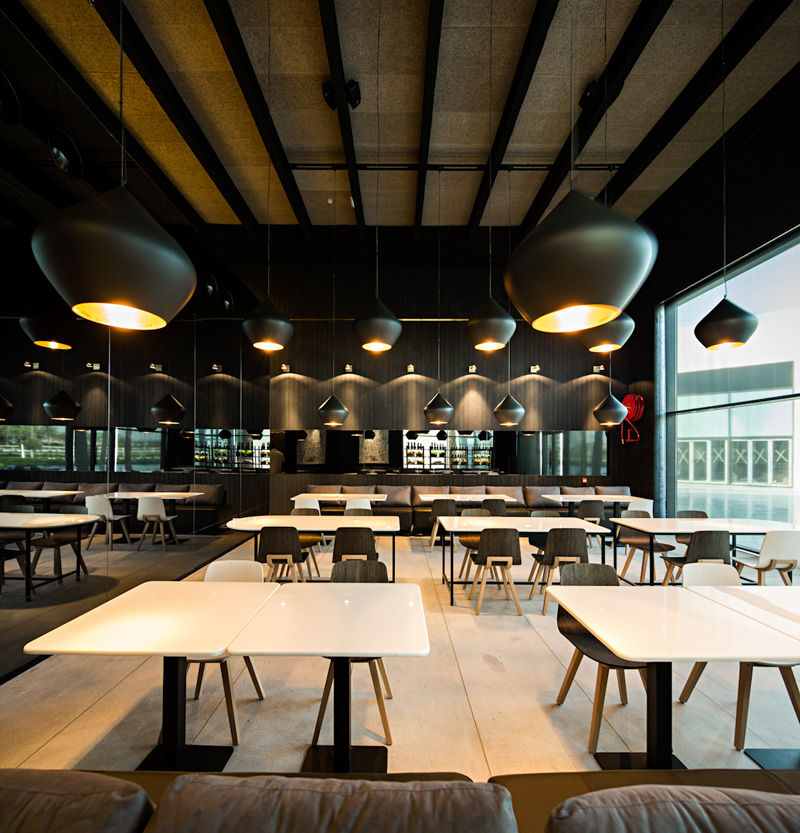 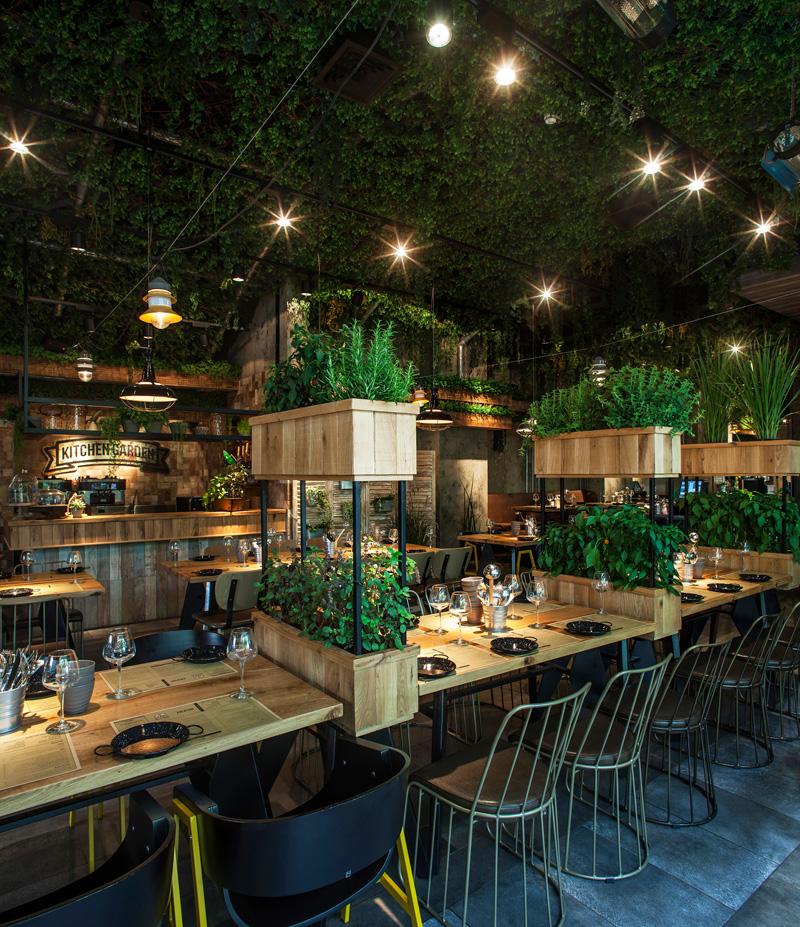 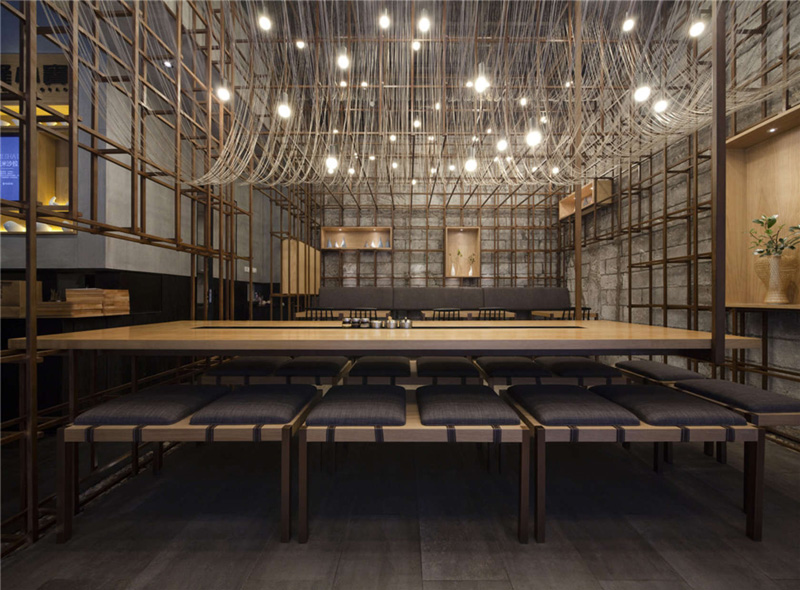 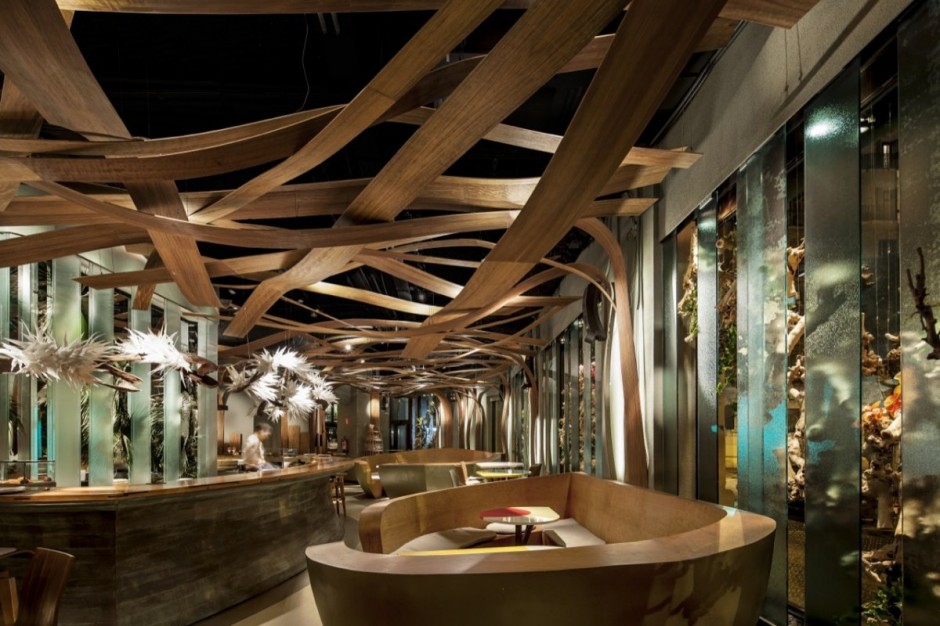 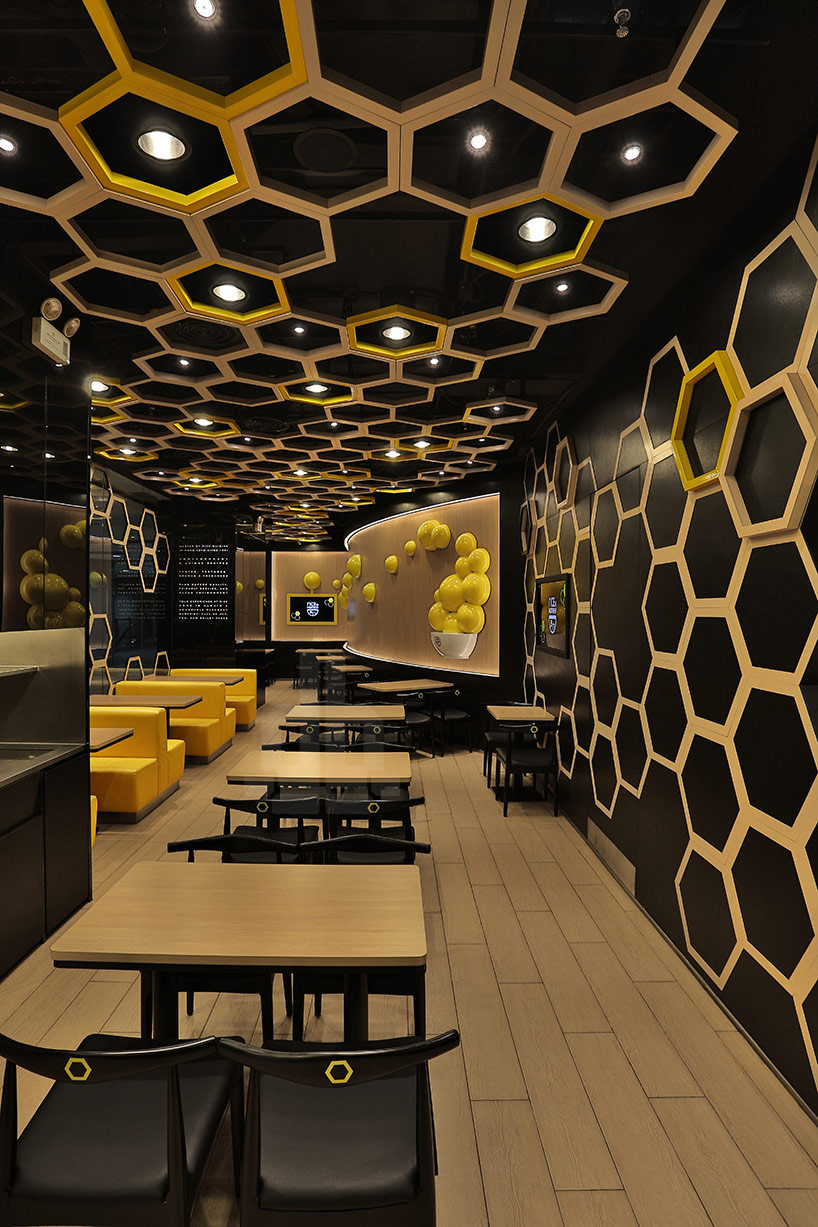 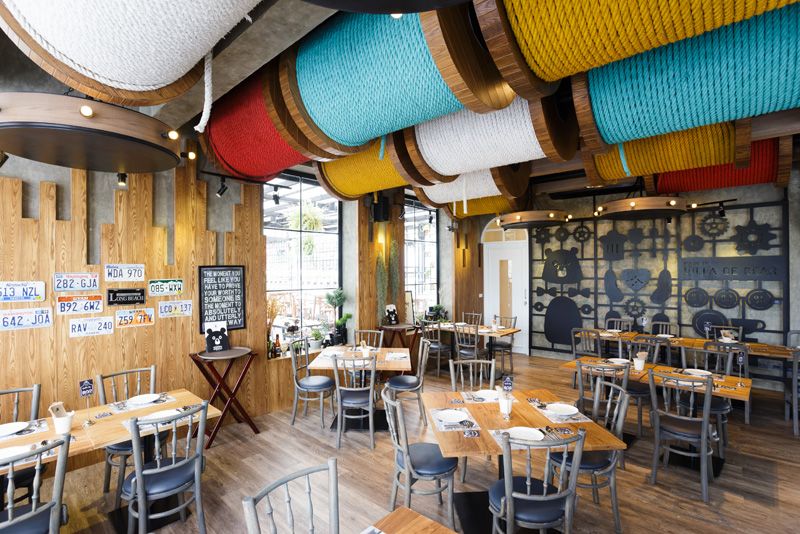 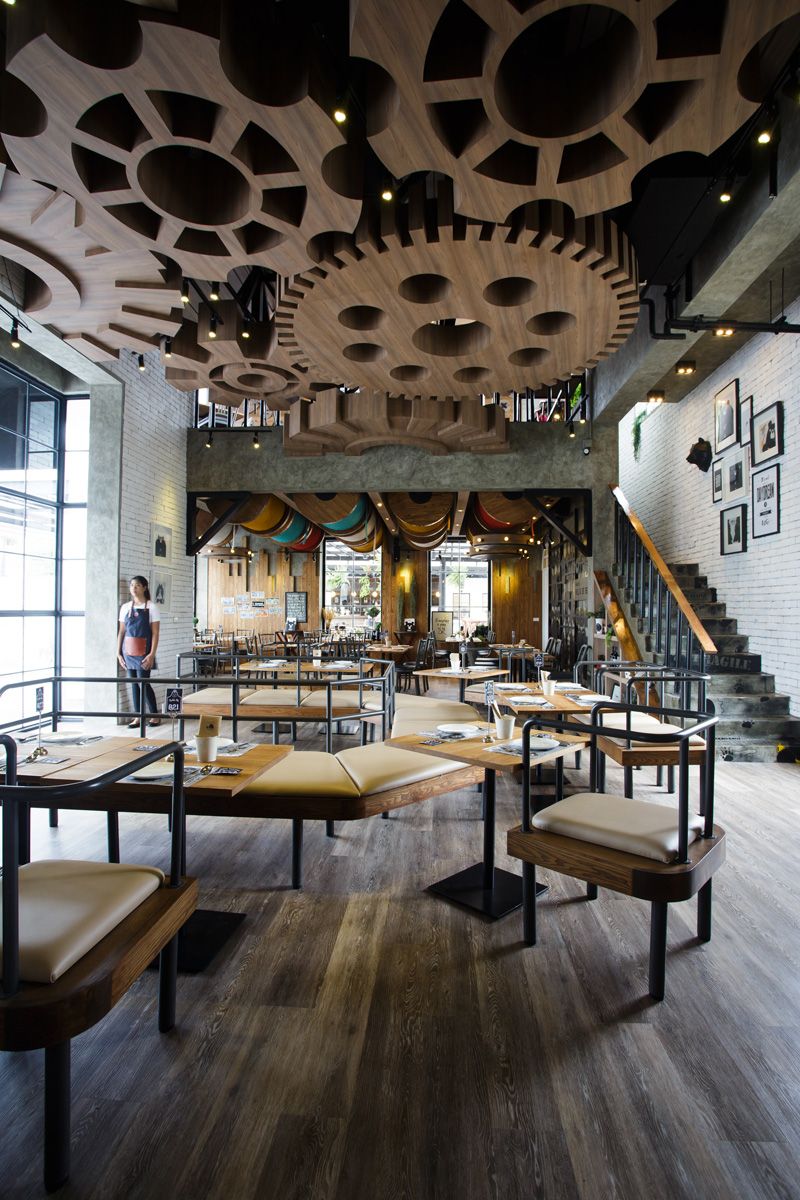 A stylish and outside the box ceiling design can totally change the look of a home and the same thing applies to restaurants, theaters, libraries and basically any other type of space. The 16 restaurants featured below definitely know how to be eye-catching and how to impress. Their ceilings are extraordinary, often becoming the focal point of their whole interior design.

Villa de Bear is a restaurant designed by party/ space/ design and can be found in Bangkok. The main concept of its design is based on the idea of a European teddy bear factory. As a result, features such as giant gears, buttons, thread spoons and teddy bear decorations adorn the restaurant’s walls and ceilings. The ceiling in particular is eye-catching, mainly because of the contrast created by comparison with the simplistic furniture and décor in general.

The Rice Home restaurant in Guangzhou

The interior design of the Rice Home restaurant located in Guangzhou, China established a casual and at the same time dynamic décor and ambiance. The restaurant was designed by Hong Kong-based company AS design and a defining feature is the ceiling. For this portion of the restaurant the team came up with a pattern made up of irregular hexagons. The approach is modern and innovative and the visual impact is a strong and playful one.

The Ikibana Restaurant in Barcelona

In the Ikibana restaurant you’ll find a fusion of Japanese and Brazilian elements which applies to both the menu served and the interior décor. A big challenge for El Equipo Creativo, the team responsible for the design, was to find similarities and singularities between these two cultures. The ceiling’s design became the perfect compromise. It’s a design statement that symbolizes the landscapes of both regions in a simplified and abstract way.

A noodle restaurant in Changsha inspired by tradition

Inspired by the traditional noodle-making technique, this restaurant in Changshau, China features a ceiling defined by a multitude of hanging lighting fixtures draped across to resemble noodle strands. The overall impression is a poetic and unusual one. The rest of the restaurant’s décor combines rustic and industrial elements while also blending eastern and western influences in a décor placed between casual and sophisticated. The restaurant was designed by Lukstudio.

The Segev Kitchen Garden in Israel

This restaurant in Hod Hasharon, Israel, is decorated with planters and the herbs that grow in them are actually used by the chef to cook with. The restaurant was designed by Studio Yaron Tal in a way similar to a greenhouse. Herbs are hanging from the walls, planters separate the tables and even the ceiling is green, giving out the impression of being in a greenhouse or garden.

The Ubon restaurant in Kuwait

In the case of this Thai food restaurant, the interesting thing is not the pattern or the dramatic visual impact of the interior design but rather the choice of materials. The Ubon restaurant is located in Kuwait and was designed by Lab100 who used burnt wood to cover its walls and ceilings. This was done using a Japanese technique for preserving wood known as “shou-sugi-ban”.

The Odessa restaurant has been around since 1962. It’s located in Chervonoarmiyska, Ukraine and in 2013 has been redesigned by YOD Design Lab. It kept its usual charm but in a completely new format. The selection of materials and the lighting play an important role as both the walls and the ceilings stand out in dramatic ways thanks to their sculptural designs.

The Tsujita restaurant in Los Angeles

When designing the Tsujita restaurant in Los Angeles, California, Takeshi Sano used 25 000 wooden sticks to decorate the ceiling. The result is a sculptural and artistic look revealing distinct patterns that symbolize clouds. The length of the sticks was carefully determined in order to obtain the perfect design able to capture the real beauty of the clouds.

The Pakta restaurant in Barcelona

This is another great example of how different styles can fuse together in order to capture the identity of a space. The Pakta restaurant is located in Barcelona and offers Japanese-Peruvian cuisine. Its interior design is also a fusion of styles incorporating references to traditional wooden Peruvian looms. Both the ceiling and the walls are designed like this, creating an overall vibrant and colorful look and a welcoming ambiance. This was a project by El Equipo Creativo.

The underwater Subsix restaurant in the Maldives

An underwater restaurant is amazing by definition. Add to that a unique themed interior design and the location becomes irresistible. Subsix first opened in 2012 as an underwater nightclub. It was recently transformed by Poole Associates into a restaurant. In addition to extraordinary views, the restaurant also has an ocean-themed interior design, the ceilings being the most eye-catching feature, adorned with hanging strings of bubbles and star=shaped light fixtures.

The Bibo restaurant in Hong Kong

Bibo is a fine dining restaurant located in Hong Kong that was named after the street artist that decorated its walls. The interior design was a project by branding and design firm Substance. Their strategy was to revive the bohemian lifestyle and understated luxury. The style chosen is a contemporary one with industrial accents in the form of large exposed pipes on the ceiling and metallic accents throughout.

The Cornerstone Restaurant in Dongcheng

The Cornerstone Restaurant is located in Dongcheng, China and occupies an area of 360 square meters. Its design was a project by Studio Ramoprimo and was completed in 2011. The team used a combination of natural and artificial materials including wood, bricks, steel plates, glass and mirrors to create a spacious décor and a cozy atmosphere. There are numerous interesting details here but the ceiling is, by far, the most eye-catching, featuring what seems like a collection of white fabric strips arranged in a random and casual pattern.

The Chapulin restaurant in Mexico

When SAMA Architects designed by Chapulin restaurant in collaboration with Mob studio, the main focus was to use materials and techniques that would reflect Mexico’s history. As a result, the restaurant’s walls are covered with 11,000 custom clay tiles made by hand. Special attention was also given to the ceilings which stand out thanks to their sculptural designs or eye-catching patterns and combinations of colors.

Located on the 56th floor of the Mantparnasse Tower in Paris, France, the Ciel de Paris restaurant offers panoramic views of the city and captures the beauty of the cloudy sky in a rather unique way. The restaurant was designed by Noé Duchaufour-Lawrance who used mirrors to reflect and redirect the light and to give the space a modern and unique look. The ceiling mirrors also double as light fixtures.

The Innuendo Restaurant in New York

The Innuendo Restaurant is located in Port Washington, New York and its most noticeable design feature is the ceiling that was designed by bluarch. The ceiling installation is a 3D cloud-like structure made up of poplar units that form a geometric pattern. LED lighting is seamlessly integrated into the design, highlighting the geometry of the ceiling as well as a series of other elements spread throughout the restaurant.

The Gochi restaurant in Melbourne

Located in Melbourne, Australia, Gochi is a modern take on a traditional Japanese restaurant, featuring an interior design infused with symbolic accents. Custom-designed lighting fixtures made of chopsticks adorn the walls and woven ropes give the ceiling a special look while also adding texture to the décor. The color palette used throughout uses black and red as the two main tones, combined with natural wood in order to create a warm ambiance. This was a project by Mim Design.