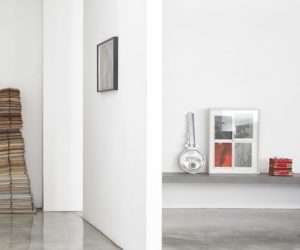 A person goes to a specific restaurant either because the food is very good or because the atmosphere is pleasant. Let’s forget for a moment about the chefs and their delicious creations and focus on the design of the restaurant. How exactly should a restaurant look like in order to attract customers? Well, that depends on many factors. And since there are so many variables, we have prepared a top with 13 different restaurant interiors. Take a look at them and let us know which one you like best.

This is the Celler de Can Roca restaurant and it can be found in Girona, Spain. I first opened in 1986 by the Roca brothers. In 2007 it got moved to a different building. The restaurant went through several major changes. Currently, the design you see is the creation of Sandra Trruella and Isabel López Vilalta.

It’s a chic look that suits the restaurant well. This place has been ranked as the second best restaurant in the world and it holds three Michelin stars. It serves Catalonian cuisine and it has a wine cellar with 60,000 bottles. Here you can enjoy all sorts of delicious dishes with some very unusual presentations and it’s definitely a unique experience. 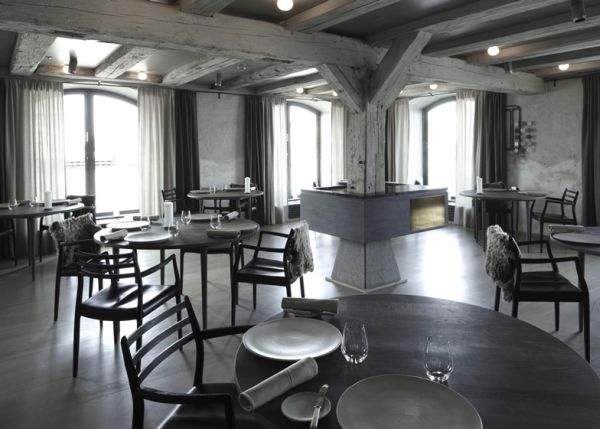 This is the Noma restaurant. It has been named “World’s Best Restaurant” this year and it’s located in Copenhagen. The interior has been a project by Danish studio Space Copenhagen. It now has a look that’s very different from the previous design.

The brown shades have been replaced with black and grey tones and the furniture has been replaced. Still, the restaurant has the same earthy feel and inviting atmosphere as always. The designers used mostly natural materials such as wood, stone, leather and linen and this definitely contributed to the overall look. In addition, this place also got new floors and a new bar made of dark wood.

Another great restaurant is the Eleven Madison Park. It’s a French restaurant that’s located at 11 Madison Avenue in New York. What’s most interesting about this place from a client’s point of vu is the menu. It includes 16 ingredients and each client can point out which one they want to be included in the meal and which one they don’t like.

Then the staff prepares the dishes. This way you can experience something new every time and you can experiment and be surprised. What’s great is that each client will have a customized meal and this way everyone feels special. 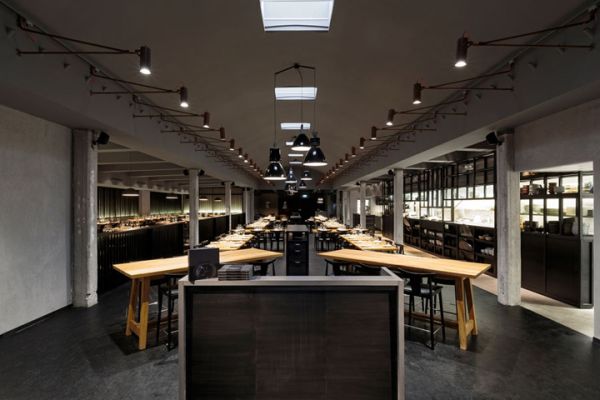 This is the Farang Restaurant. It’s located in Norrmalm, in the heart of Stockholm and it’s a very charming place. In terms of design and architecture, the restaurant combines local and Asian influences into a contemporary look.

Situated on the ground floor of an industrial building, the restaurant was initially just an empty 700 square meter space. It was turned into the beautiful space that it is today. It still has an industrial character but it’s also contemporary and stylish. The color palette and the materials used are elegant and simple and this makes the atmosphere inviting. The transformation was a project by Futudesign. 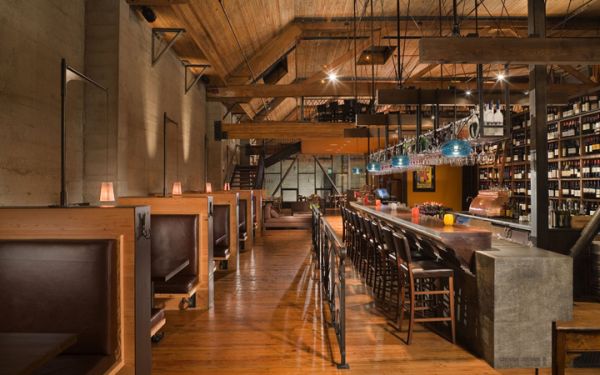 Osteria La Spiga is a family-owned Italian restaurant located in Seattle’s Capital Hill neighborhood. It has a total surface of 6,000 square feet and it’s located in an early 1900’s industrial building. 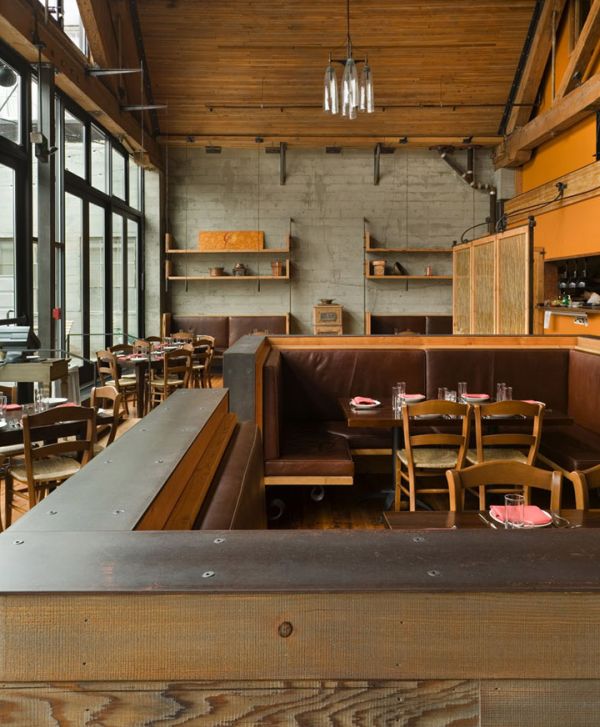 This place used to be an auto body shop and it had a very open structure. It got redesigned by Graham Baba Architects who broke the space into more intimate areas with family-style booths and with sliding glass panels. The interior design is now a mix of traditional and modern elements. It features many elements made from reclaimed materials and the overall design is not just stylish but also sustainable.

The Taizu restaurant is located in Tel Aviv and it has a very chic, elegant and modern design. Initially, the client requested for the design to be based on the five elements of the ancient Chinese philosophy which are fire, water, earth, wood and metal.

He also wanted the menu to be inspired by the street food of Thailand, Vietnam, Cambodia, China and India. This mix of elements and influences creates a very nice mix, beautifully balanced and harmonized. Pitsou Kedem Architects designed this space with an organic look and with a synthesis of patterns and textures that dominates the interior. There’s also a very nice balance of informal and formal spaces. 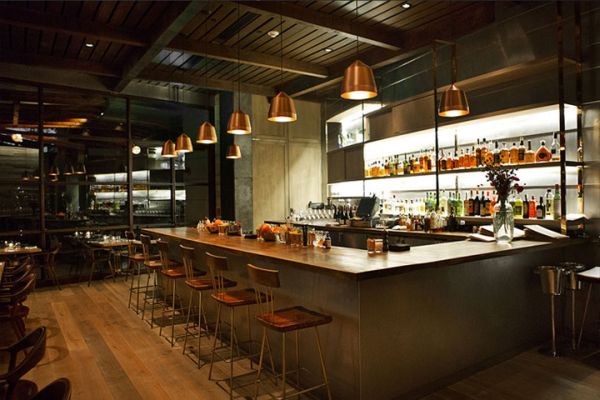 This is the Hinoki & The Bird restaurant. It can be found in Beverly Hills and it has a simple but lavish design. Situated on the ground floor of a building, the restaurant has a luxurious interior.

It was designed by Milo Garcia. It’s open and it’s very inviting. For the interior, the designer used cedar in combination with glass and timber to create a warm and welcoming atmosphere while maintaining the simplicity of the décor. The curved brass panels also add charm to this place. The open kitchen features antique kitchenware and brass shelving and has an adjacent steel and glass wall that is connected to the patio. 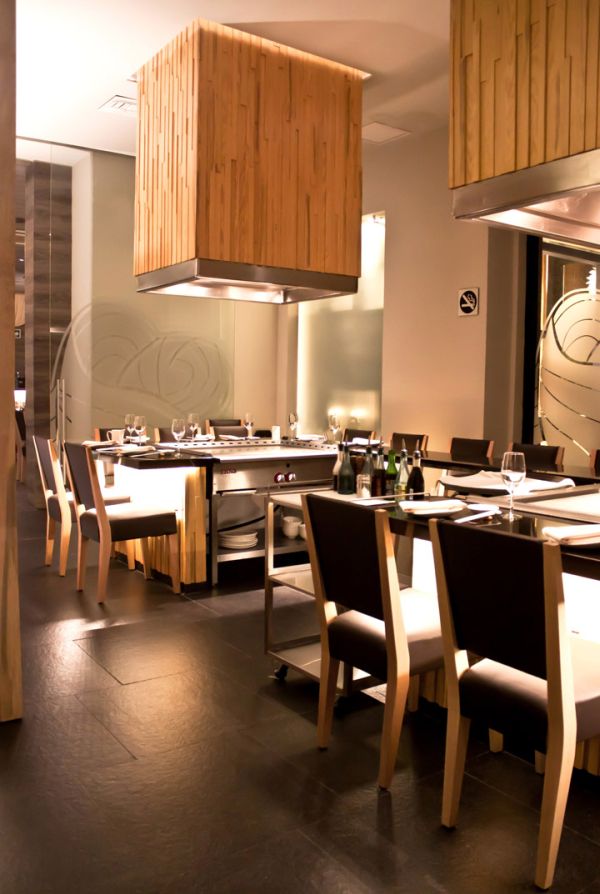 This is the Sato restaurant. It’s located in Leon, Mexico and it has been designed by Taller5 Arquitectura. As you can see, it has a very lavish and stylish interior but, at the same time, it’s simple and somewhat casual.

The designers used a lot of wood for this project. They used big blocks to hide the lighting fixtures and these features help create a warm and inviting atmosphere. The tables are sleek and simple and the diners can watch the chefs prepare the meals right there in front of them. It’s a great experience and a great restaurant to enjoy it in.

Located in Santiago, Chile, La Boquería de Barcelona is a restaurant with a Catalan cuisine. The building in which the restaurant has been designed was previously a steak house with two levels.

It has been partially demolished and now it only has a balcony on the upper level. Inside there are two areas divided by a two-level wine cellar. The window treatments are very interesting and they give the restaurant character. To harmonize the two areas, cool colored glass tiles were used for the sunrise side and warm colored tiles for the sunset side. This way there’s no obvious difference in lighting. 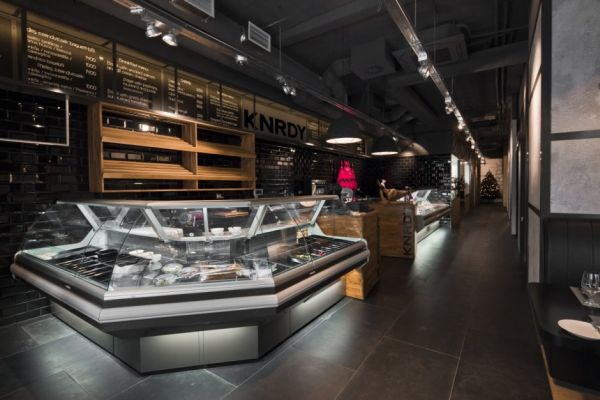 This is the KNRDY restaurant and it’s located in Budapest, Hungary. It was designed by Suto Interior Architects and it’s a steak house and bar. It can be found in a 100 year old building and has a very interesting interior.

The most striking is the guest area. It can accommodate 40 guests and has glass partitions that separate it from the rest of the restaurant. The mosaic wall is also an interesting feature that displays city views of New York. As they enter, the guests can take a look at a beautiful collection of chairs as well as to a selection of meat displayed in a glass cabinet. The chefs are preparing the meals behind a glass wall. 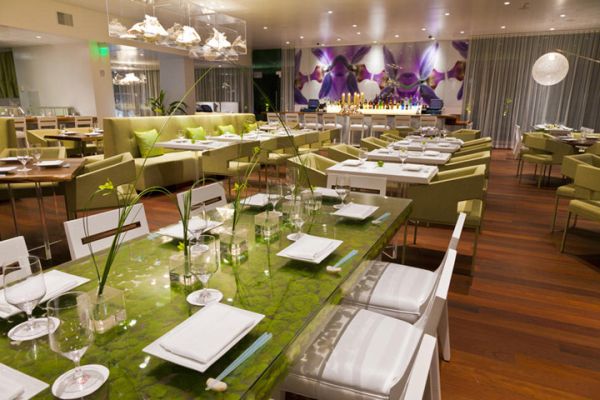 The Morimoto Waikiki restaurant is located in Honolulu, Hawaii and it has a very eye-catching interior. It was a project by Schoos Design and it was inspired by the Japanese design in general.

In order to avoid making reference to any specific culture, the designers kept everything simple. They used limited colors and textures but they used everything in balance and with creativity. They included in the design a variety of eye-catching details such as natural artifacts, live moss or large corals that have been used as art pieces. The interior is very bright and there’s a lot to admire once you step inside. 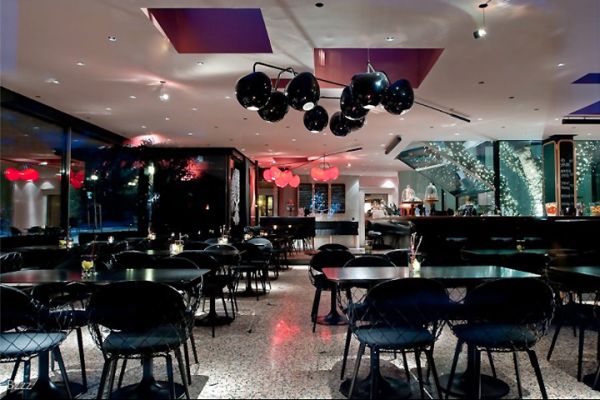 This is the AS Aperitivo restaurant and bar. It’s located in Ljubljana, Slovenia and it was designed by Nika Zupanc. The interior is very glamorous but also very simple. The light fixtures are very interesting, the red ones resembling cherries and the black ones resembling olives.

The style is a combination of classical and modern. The interior has a certain amount of drama and yet it’s also simple. The wine bar is a very nice feature and it’s a fusion of indoor and outdoor spaces. Most of the furniture was custom-designed for the restaurant and this makes a unique space where guests can enjoy a one-of-a-kind experience. 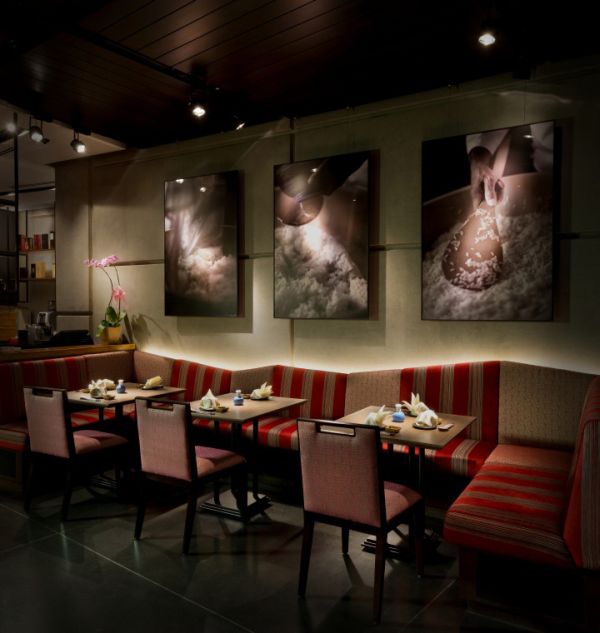 The last example we’ve included here is the Kampachi restaurant. It was designed by Blu Water Studio and it opened 40 years ago. It’s a very chic and inviting restaurant with a warm and pleasant atmosphere. Located in Kuala Lumpur, it has become an icon of sophisticated Japanese cuisine.

The style is a synthesis of contemporary and traditional elements. Some of the original features have been preserved when designing and decorating the restaurant and they include the concrete features, the irregular lines and some of the recycled elements. The customized lighting fixtures are one of the most beautiful features that have been included in the design along with the subtle light and intimate atmosphere.