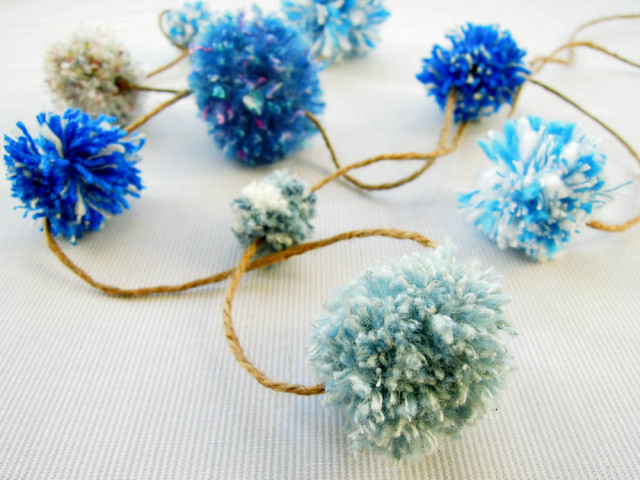 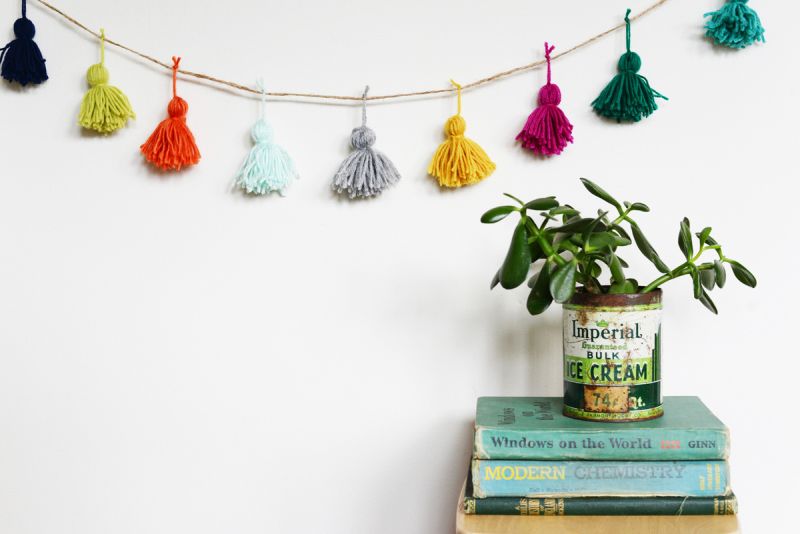 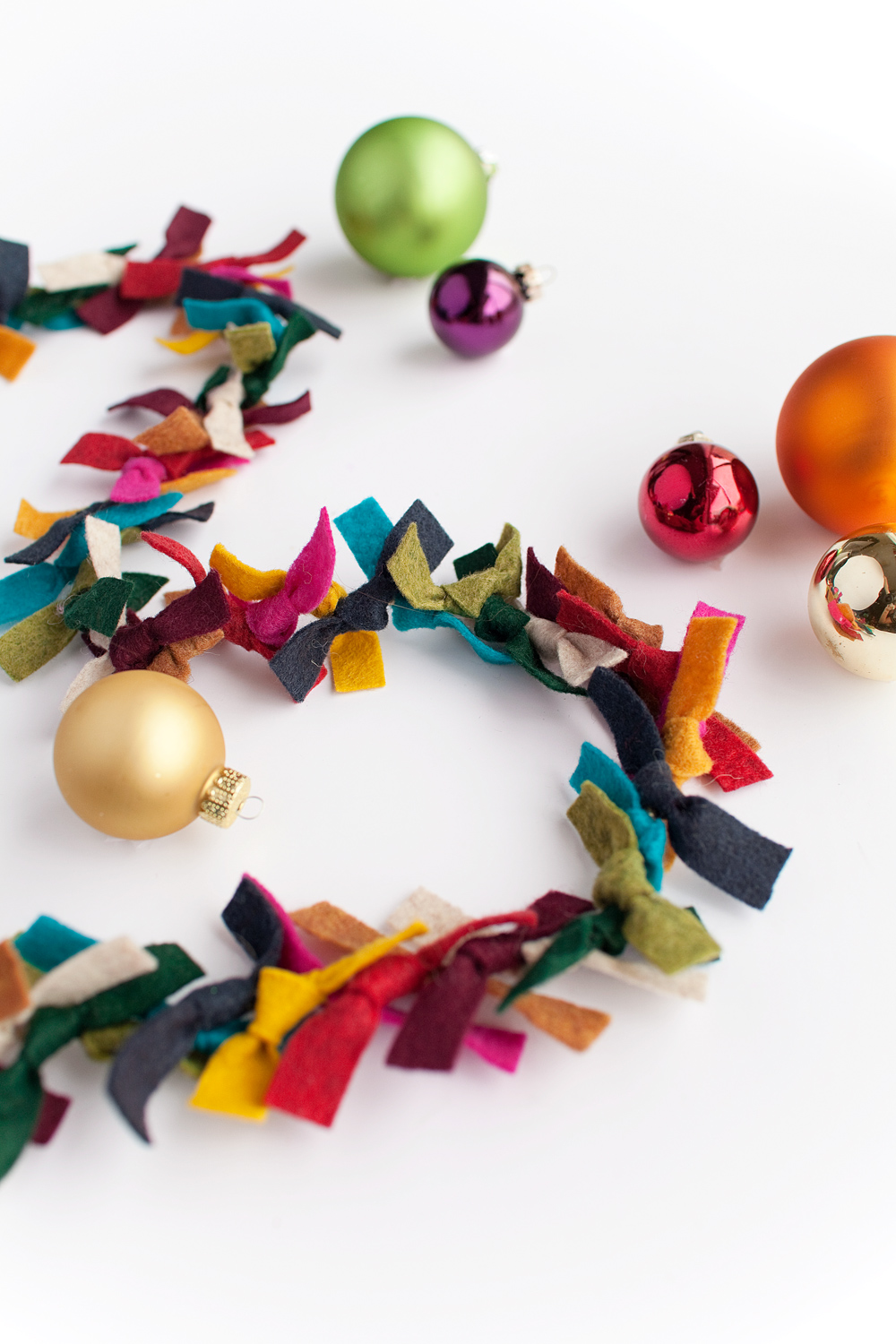 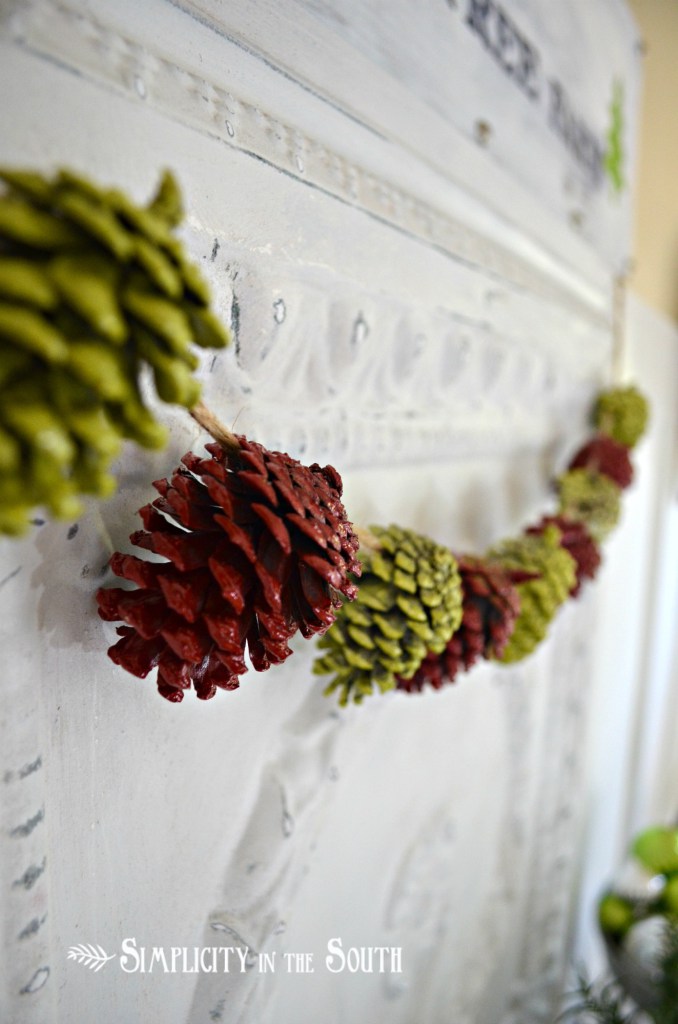 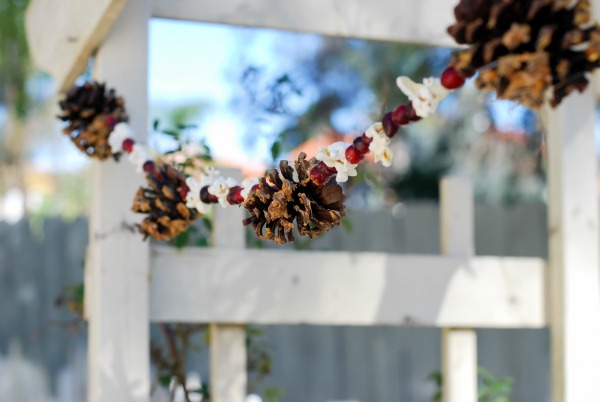 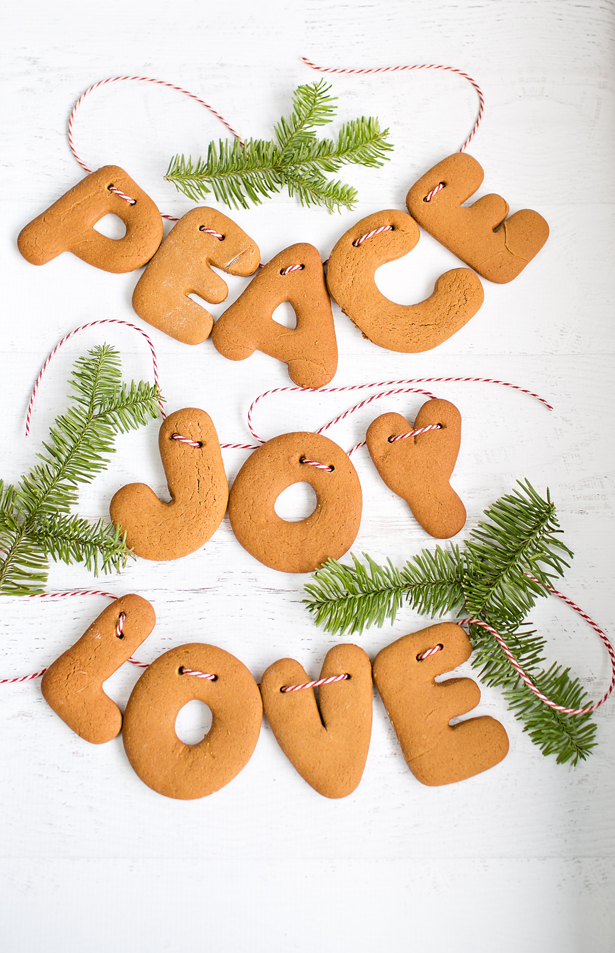 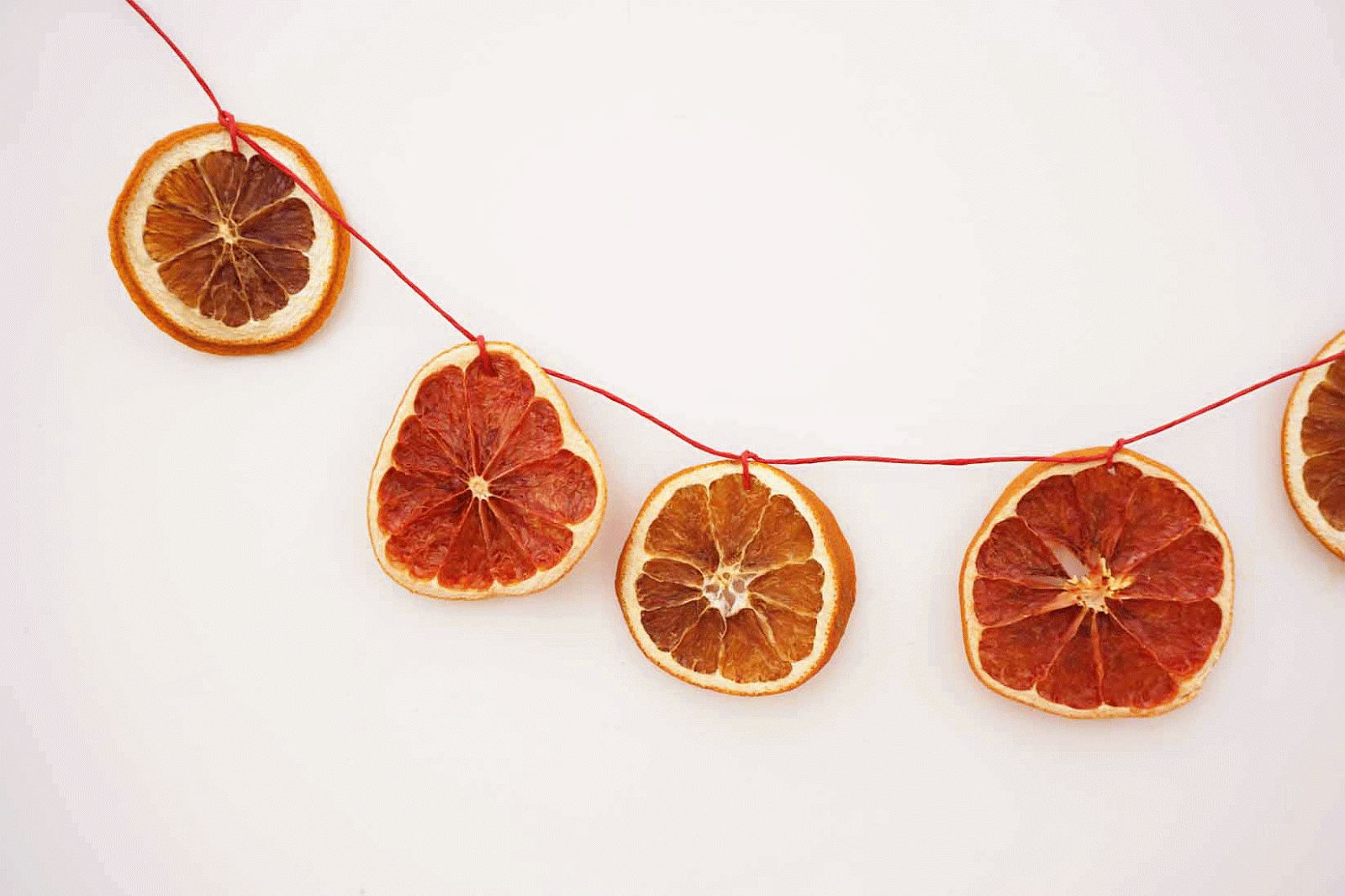 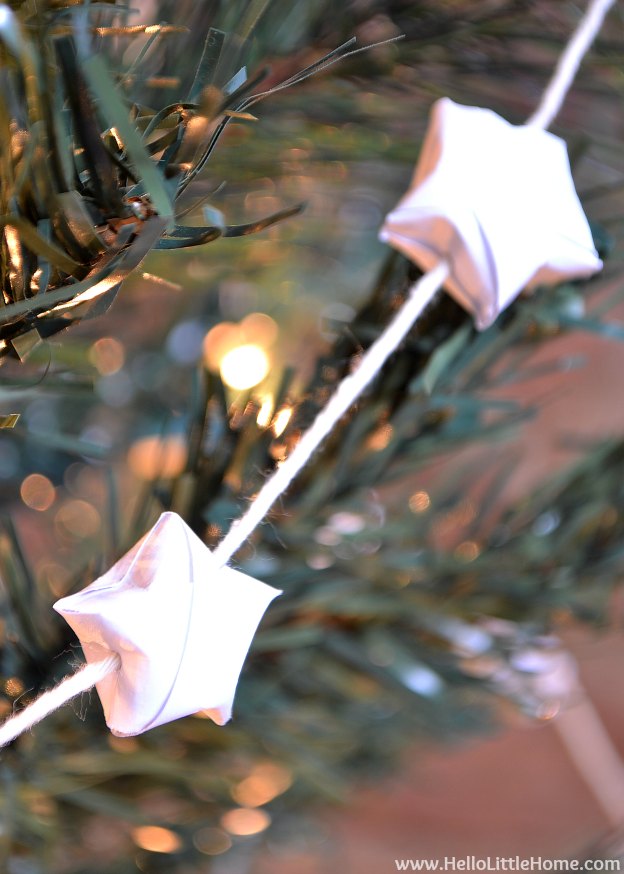 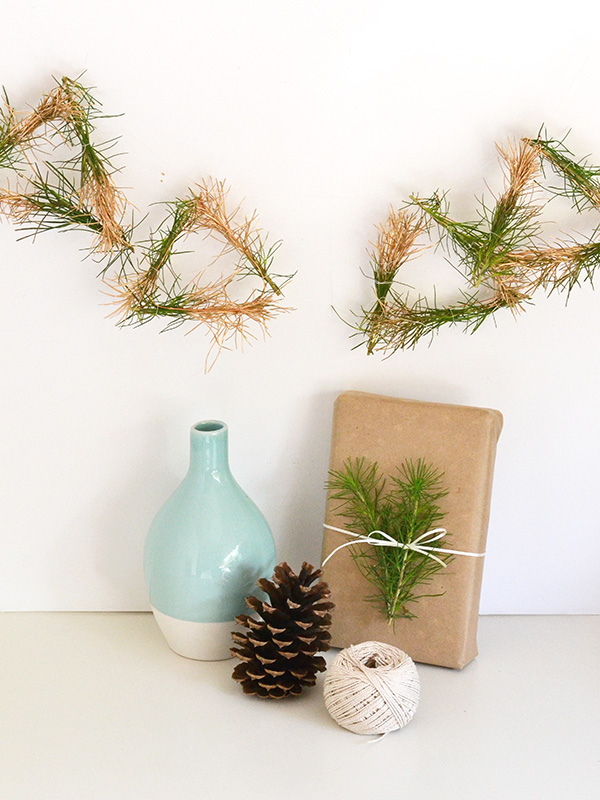 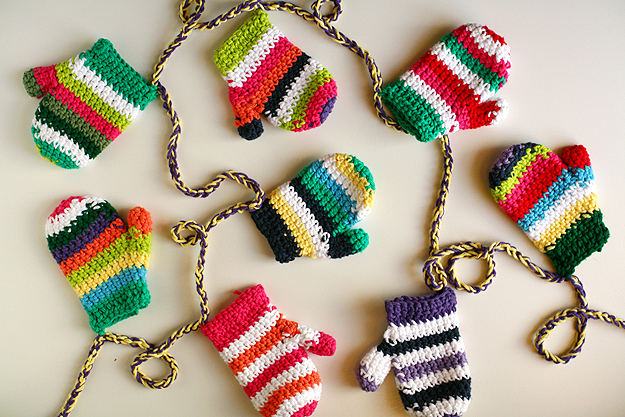 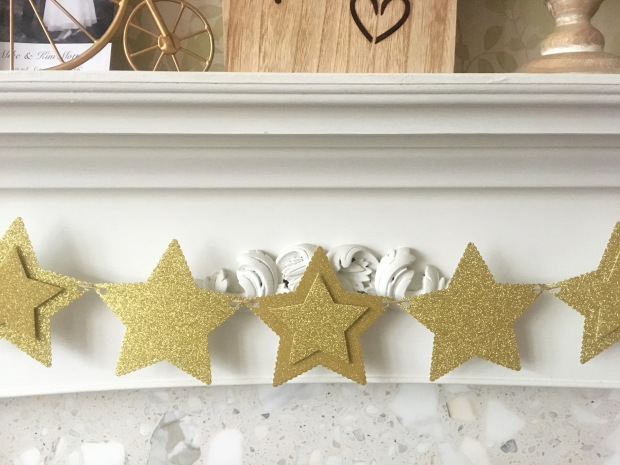 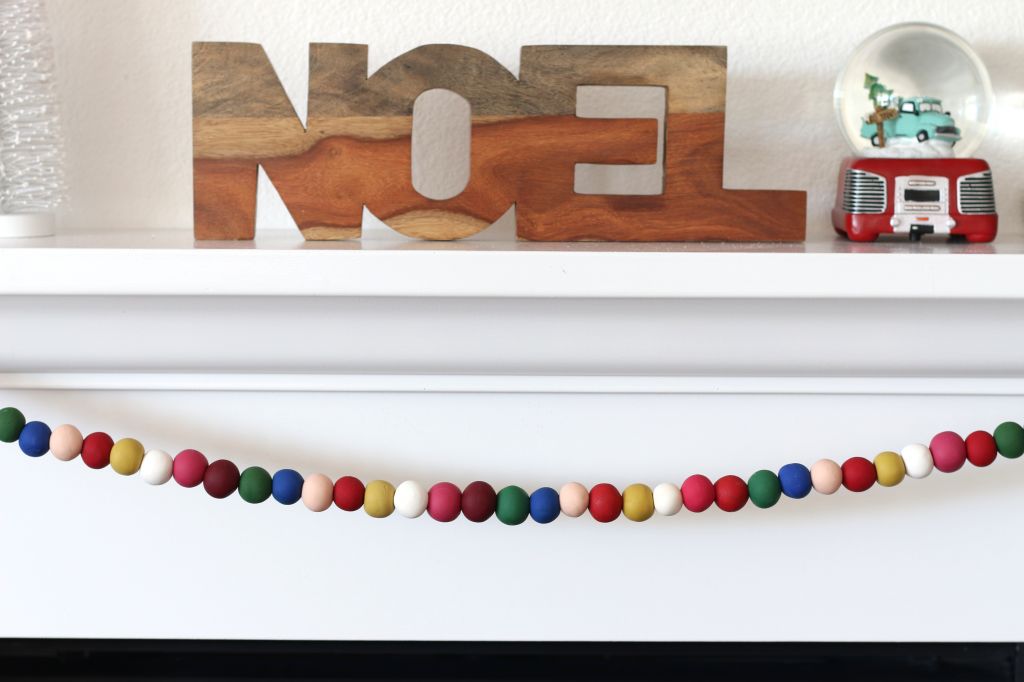 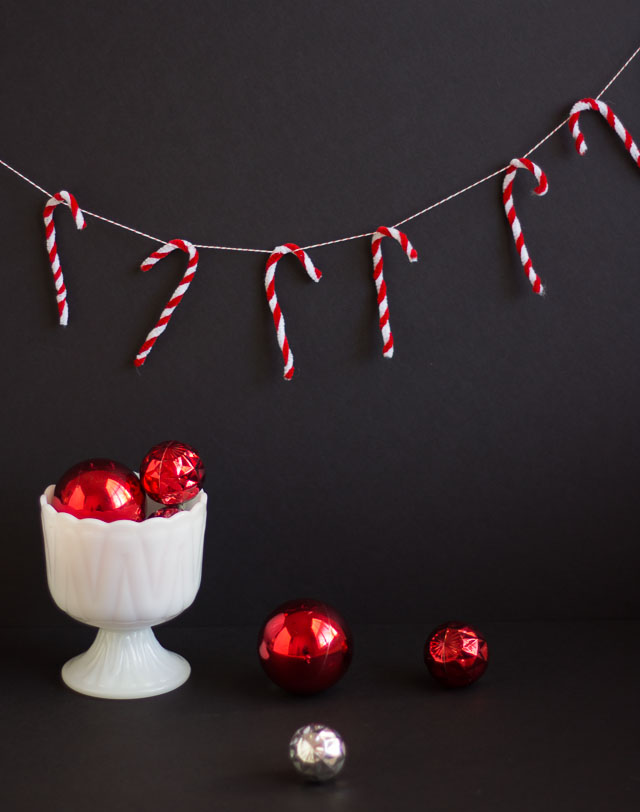 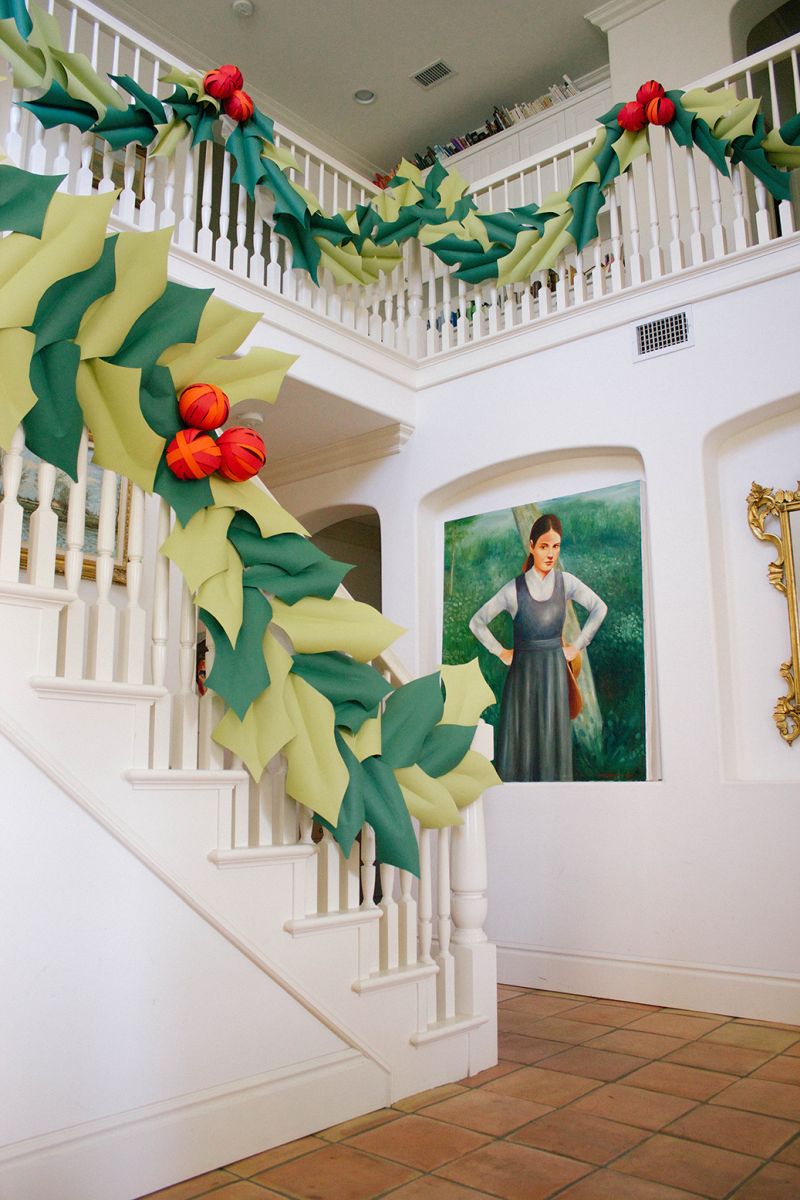 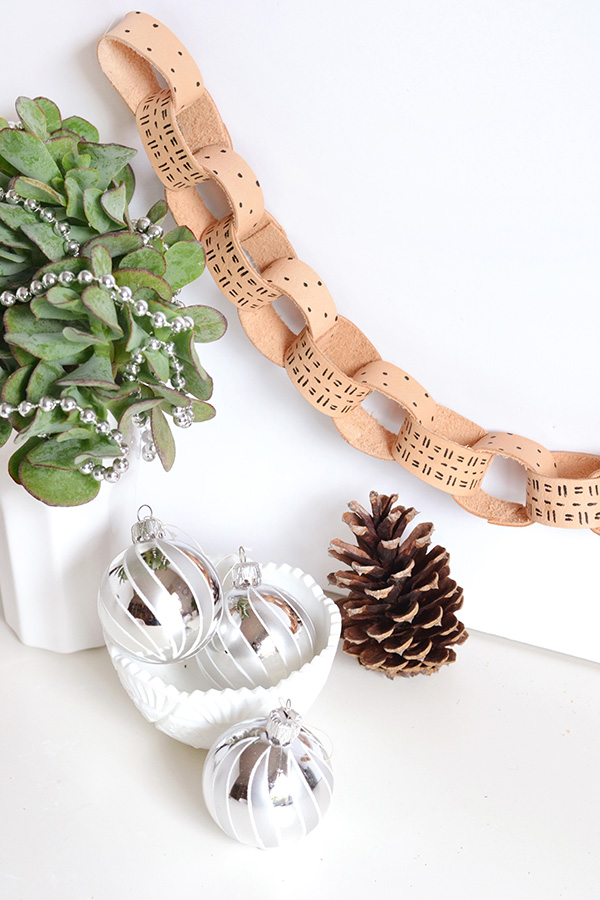 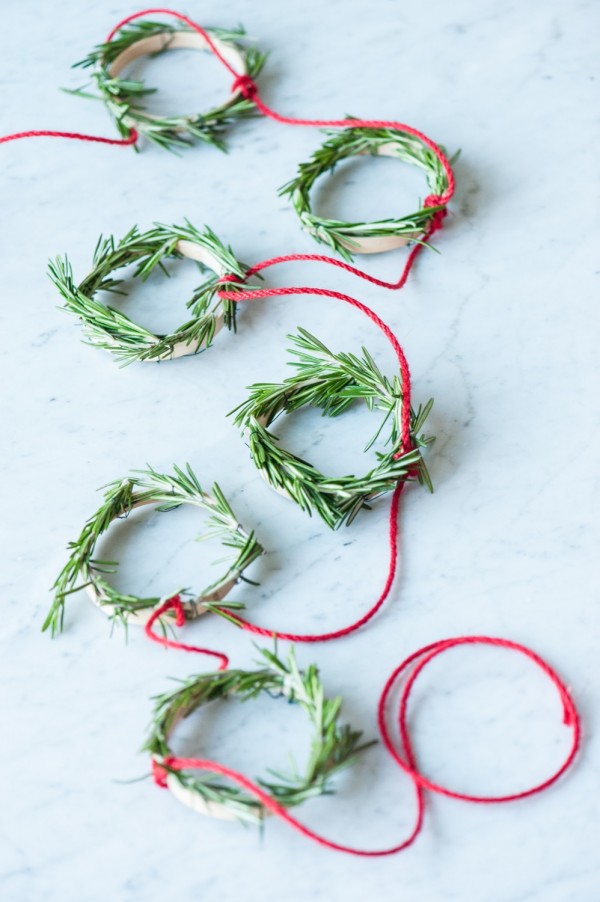 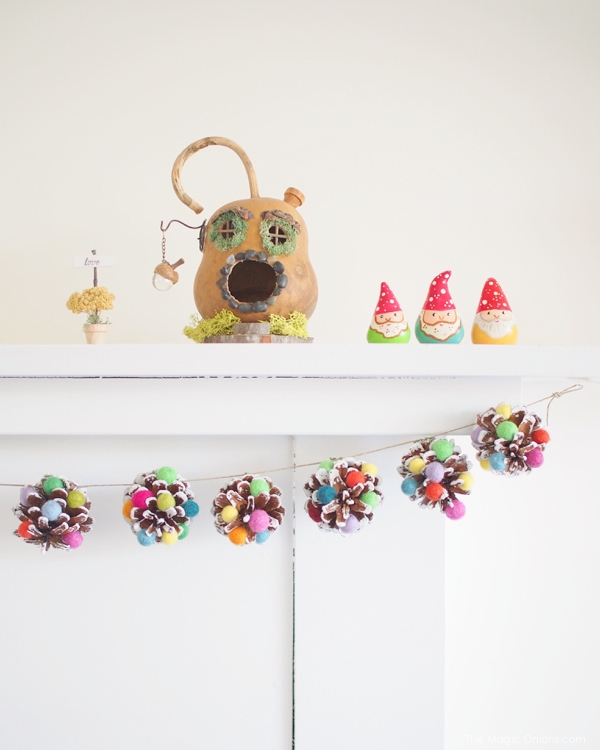 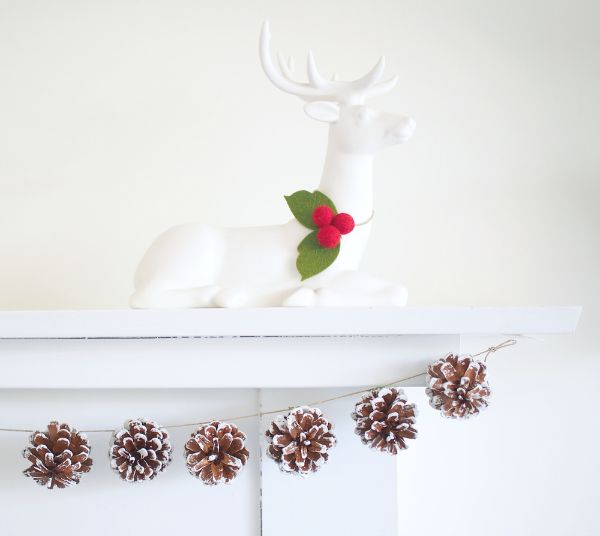 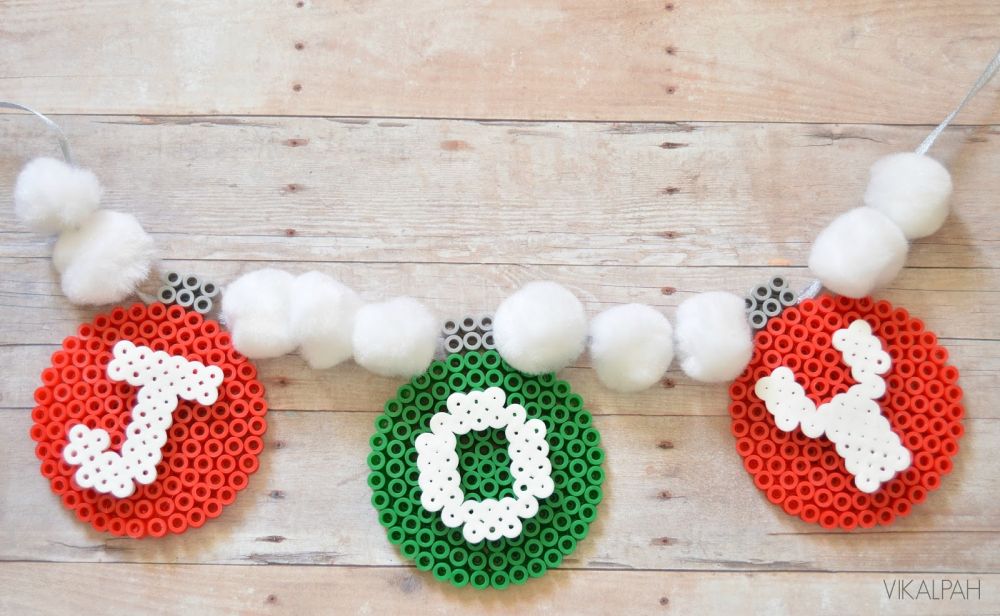 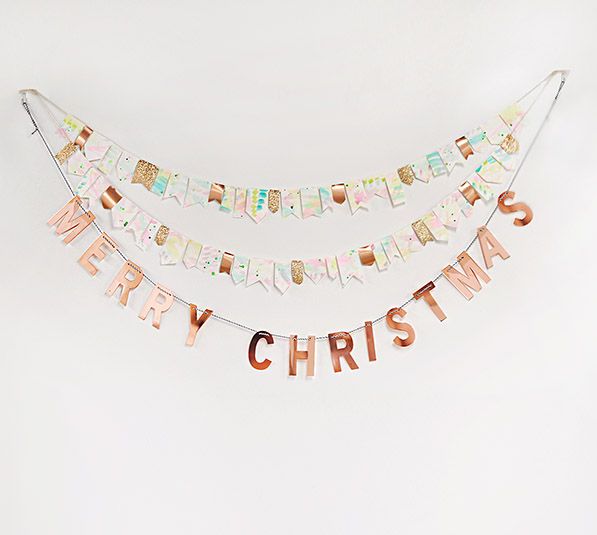 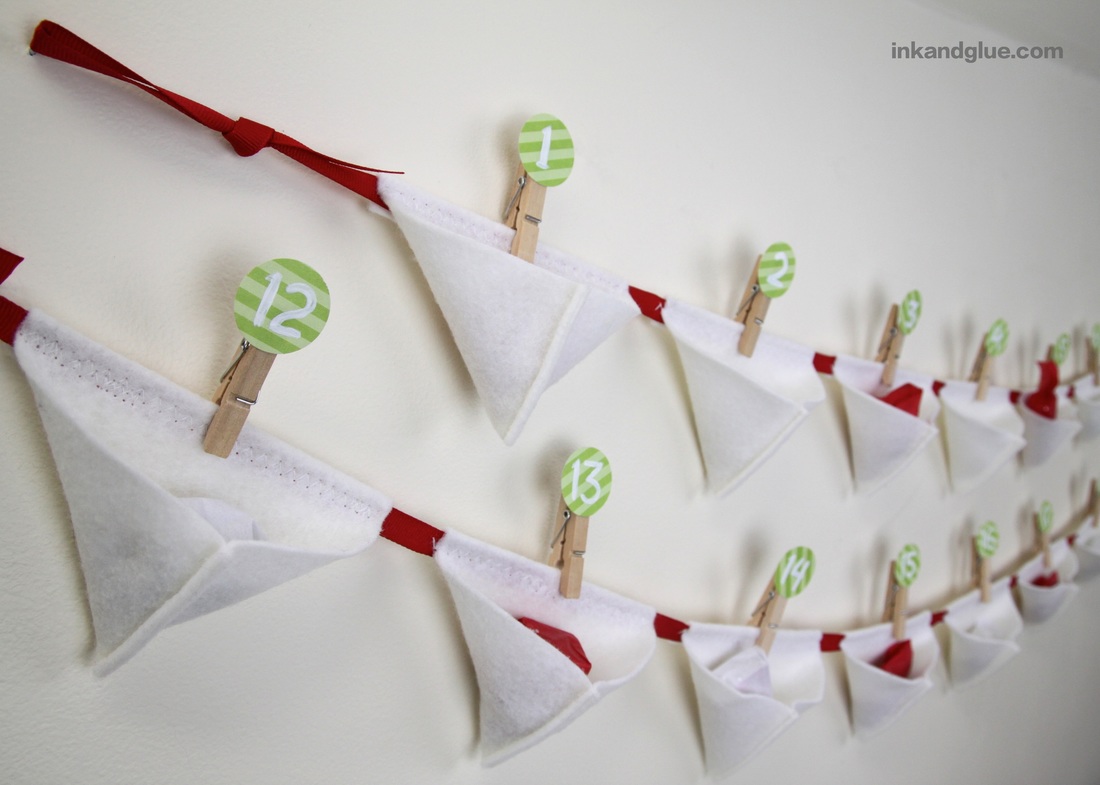 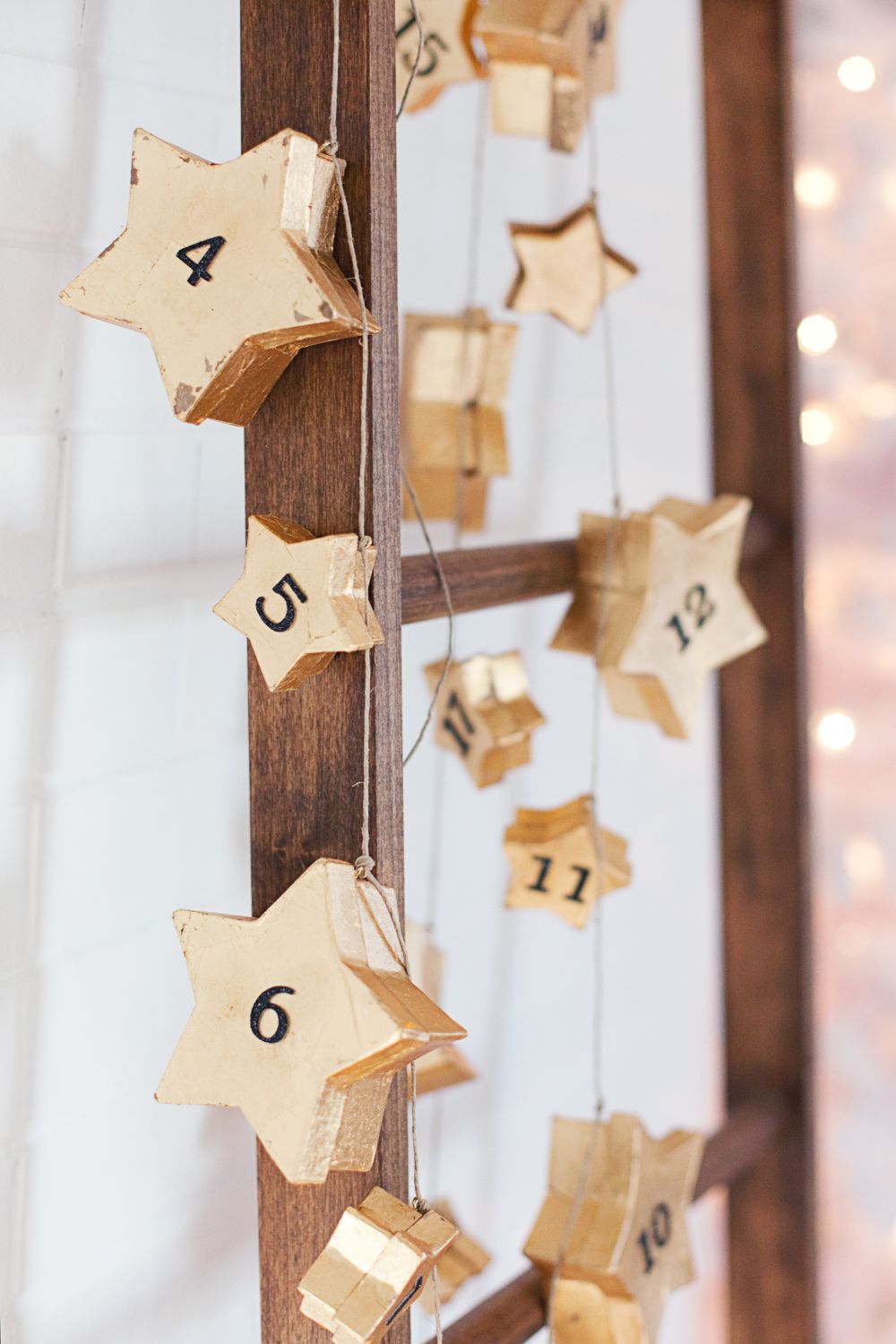 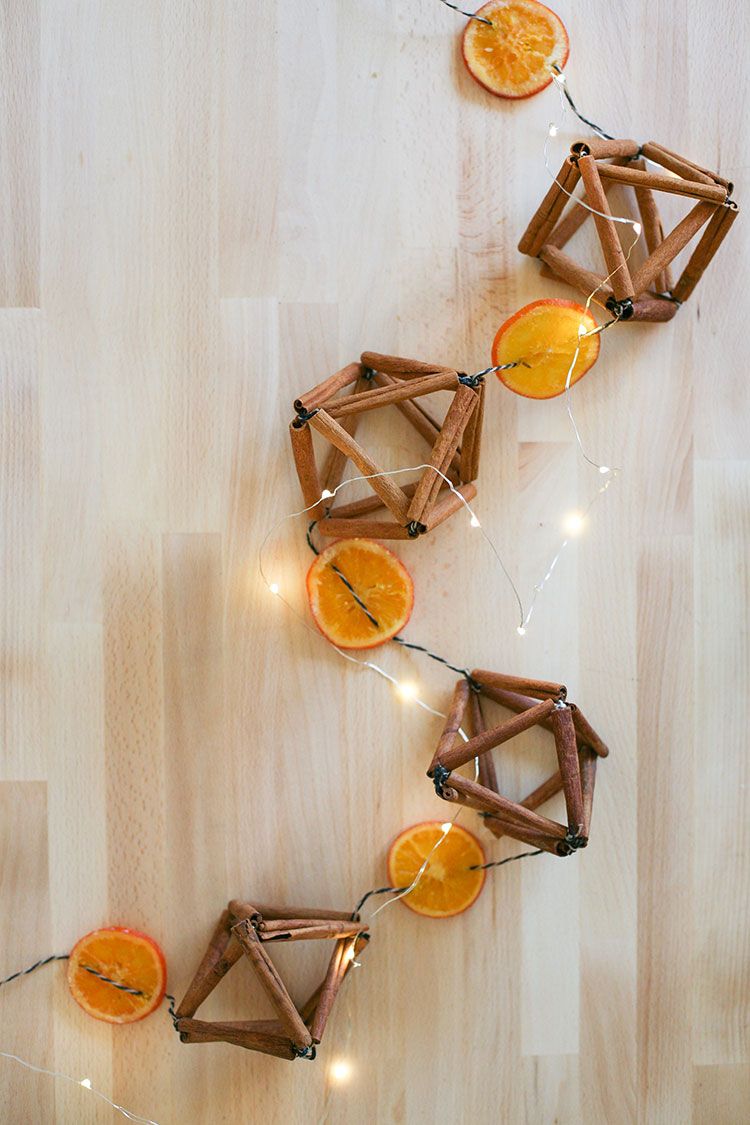 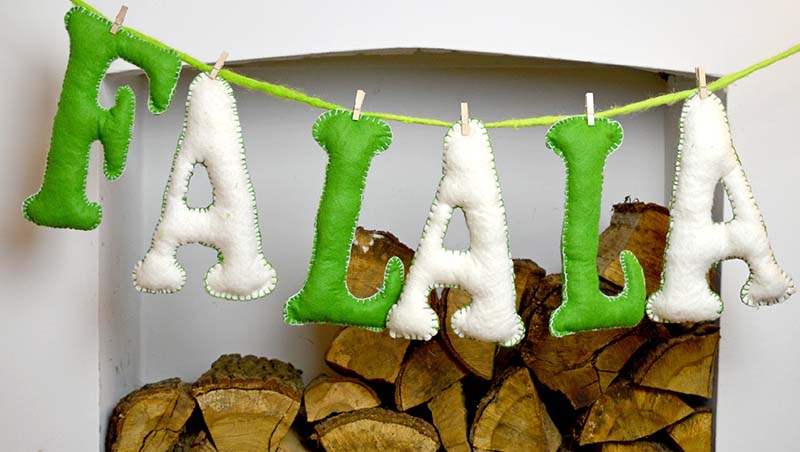 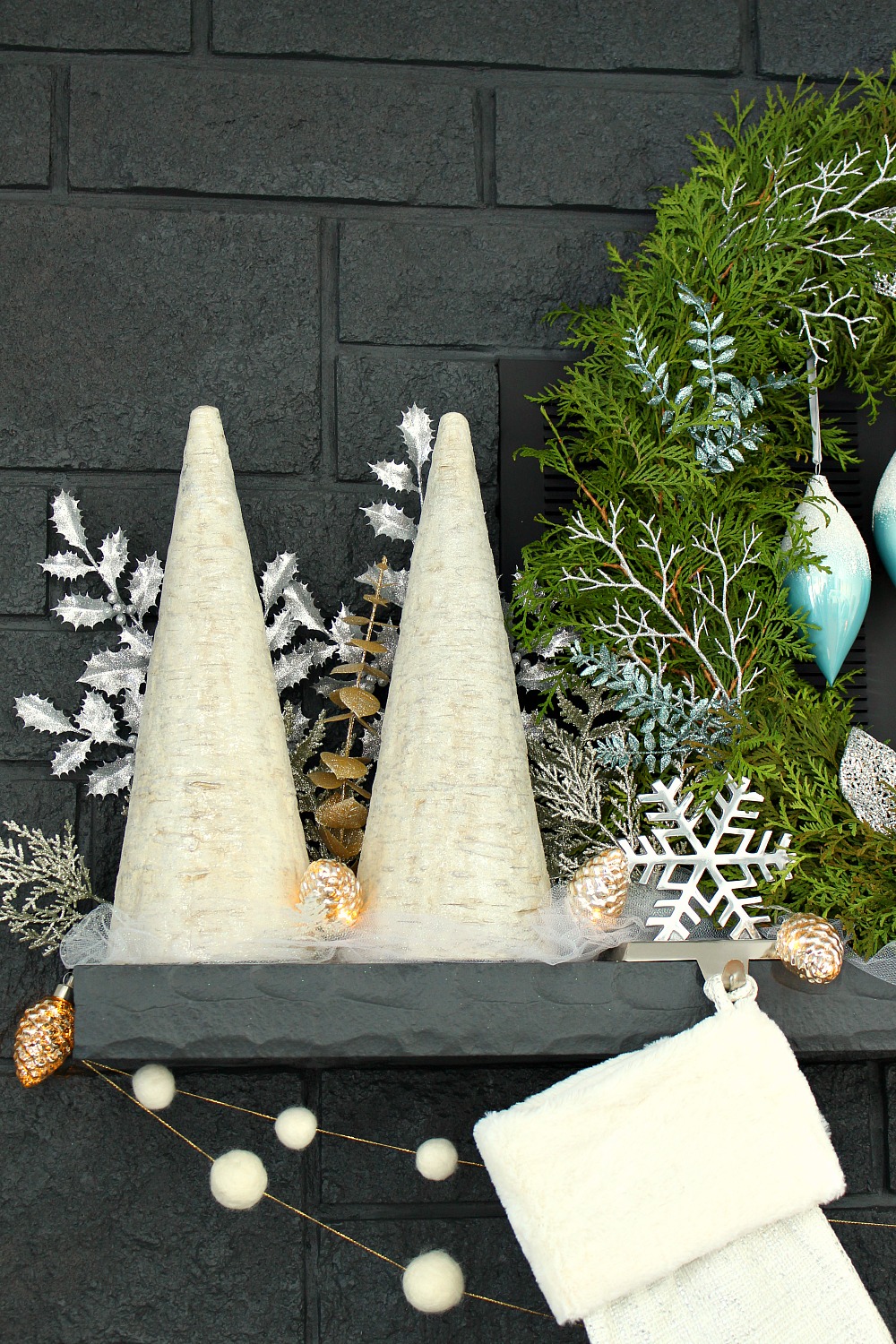 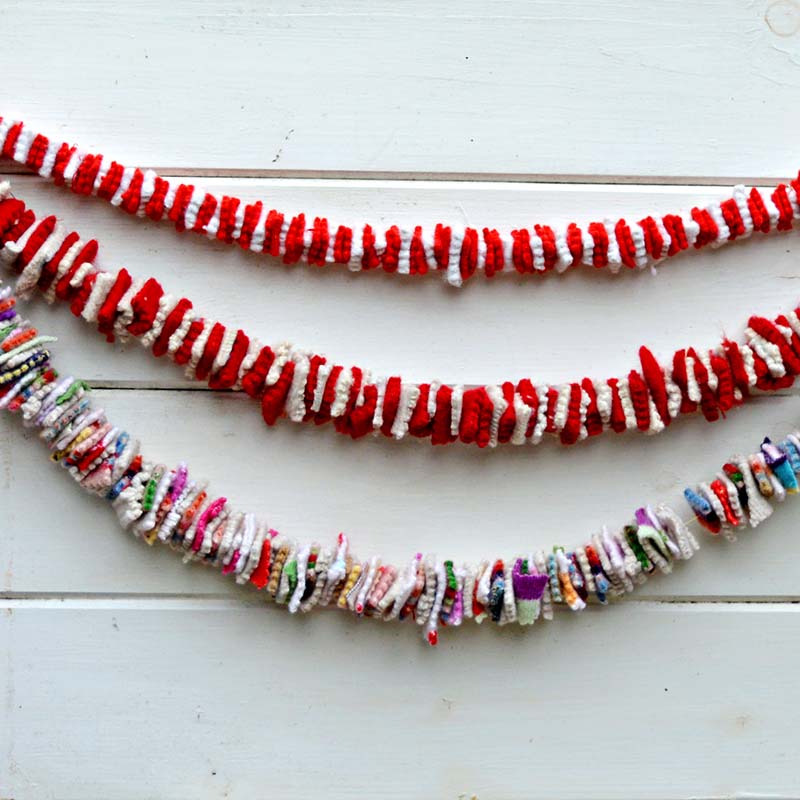 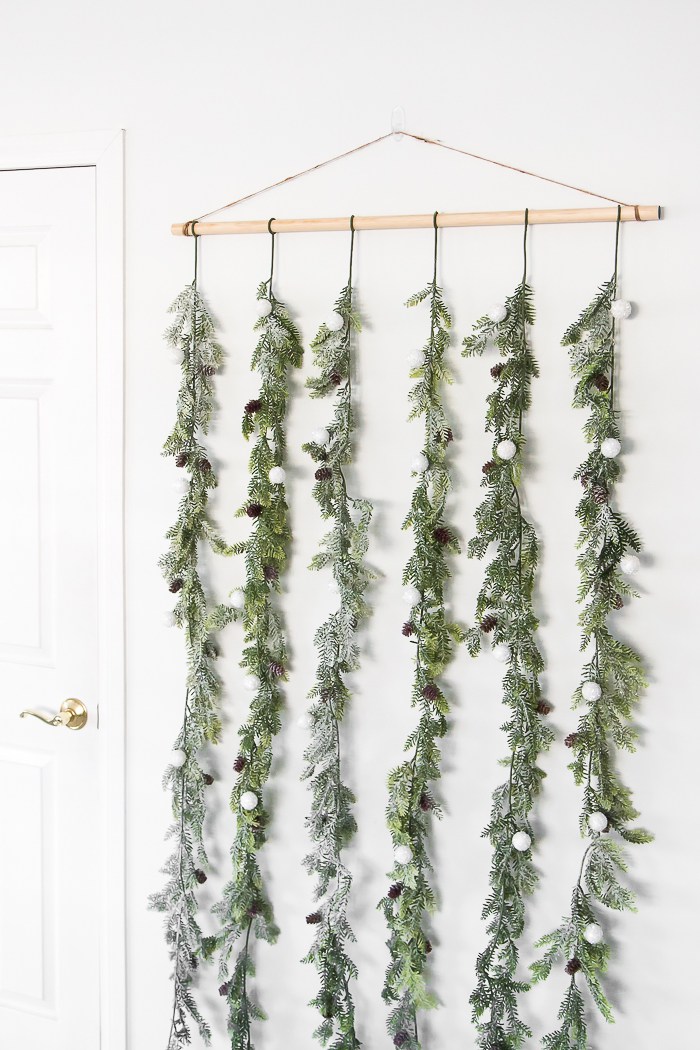 As popular and as common as garlands can be, they’re not for everyone. But don’t rush to consider garlands outdated and boring just yet. As you know, there’s usually more than one way to look at things and there are always exceptions and designs that bring forth new trends and ideas. Basically what we mean by that is that we’re here to show you that Christmas garlands can actually be exciting and interesting.

You can probably buy some ready made pine garlands but in case you don’t find any at your local stores, you can always just make such a garland yourself. You just have to tie or glue together a bunch of evergreen trimmings and if you want you can also add some pine cones from place to place. Once you have a few of these garlands, you can display in a stylish manner using a woodel dowel, as suggested on Thebeautydojo.

Not all Christmas garlands are made of green branches and trimmings. In fact, most of the ones we have in mind aren’t. One alternative can be a felt garland. You could make one using lots of felt scraps cut into little squares. Thread a button onto one end of the thread and then add the squares one by one. When you’re done, add another button. You can combine the colors however you want. {found on pillarboxblue}.

If you’re familiar with felt balls and you already know how to make them, this next project should be really easy. In case you need some instructions you can check out Sandlelakehouse. To make a felted ball garland you need wool roving, liquid soap, hot and cold water, a large needle and embroidery thread.

You can combine various techniques and designs to create custom Christmas garlands. For example, you can make a garland out of felt squares as shown above and add some letters to it. What you’ll get will be a cheerful decoration. Hang the letters from the garland using mini clothespins. You can craft the letters out of felt as well. Have a look at the tutorial featured on Pillarboxblue for more details about this project.

Some Christmas garlands are more than they let us see. For instance, this one featured on Abeautifulmess is also an advent calendar. Each star in the garland is in fact a small box filled with goodies. They’re all numbered so you know in what order to open them. We suggest paper mache boxes but you can use whatever type you want.

There’s also an easier way to make an advent calendar garland. You could make a bunch of small pockets out of felt and then thread them all onto ribbon or twine. Check out the instructions on Inkandglue to find out how to make these cute little pockets.

If you want your garland to be purely decorative without any hidden meaning, then you could make one out of paper and you could paint it yourself using watercolor or acrylic paints. The idea comes from Delineateyourdwelling. Use heavyweight paper and first paint a bunch of sheets, let them dry and then cut them into pieces. Glue these to a piece of string. You can also use metallic contact paper for some contrast.

Have you ever worked with Perler beads? They’re really fun and versatile and you can use them to make some cute ornaments which you can then display on a garland as shown on Vikalpah. You need a board and a bunch of beads, parchment paper, an iron, ribbon or thread, pom poms and a hot glue gun. Arrange the beads in any shape you want, cover them with paper and iron over them. After they’re fused together, wait a bit and remove them from the board. You can now add them to your pom pom garland.

If you have any pine cones now would be the time to use them. You could make a snowy pine cone garland. You just need the cones, some white paint, floral wire, string and a paint brush. Paint the tips of each pine cone and let the paint dry. Wrap floral wire inside the tines of each cone and form a loop, then thread the string through the loop. Space out the cones on your garland. {found on themagiconions}.

After you’ve painted the pine cones as described previously, you can also glue a bunch of tiny pom poms on them. It’s pretty much the same project as before with added felt balls. Add a dab of hot glue to each felt ball and then stick it onto the pine cone. Mix and match the colors as you want. {found on themagiconions}.

Wreaths are popular and usually displayed on the front door. Mini wreaths, however, can be used to make a really lovely Christmas garland. You can make them out of fresh rosemary branches. You’ll need embroidery hoops, twine or string, scissors, floral wire and rosemary. Tie the branches to the hoops and then make a loop around each one so you can string them to form a garland. It’s all described in detail on Thesweetestoccasion.

If by any chance you have some leather scraps and no good use for them, perhaps you they’re enough to make a Christmas garland. Apart from the leather you’ll also need scissors, an acrylic paint pen and craft glue. Measure and mark out long rectangles on the leather and then cut then out. These will be the links on your garland. Paint patterns on each one and then form loops, securing them with glue. Insert each piece of leather through the previous loop. We found this idea on Makeandtell.

Oversized garlands work well if you have a staircase. You could make a really beautiful garland out of paper. Use two different shades of green and alternate them to get a design similar to the one featured on Thehousethatlarsbuilt. Basically you’ll have to make a lot of oversized leaves and then add some red paper ball ornaments to get that holy and berry combo.

How about a candy cane garland? That would surely look delicious. You could use actual candy canes or you can improvise and make he canes out of red and white pipe cleaners. It’s an idea that comes from Designimprovised. In addition to the pipe cleaners this project also requires some matching baker’s twine, scissors and a darning needle.

The gumball garland featured on Delightedmomma looks really cute as well. If you want to make something similar you’ll have to work with an assortment of polymer clay and waxed cotton cord. You’ll also need a bead making tool or a toothpick. Soften up the clay, rip into chunks and start forming the balls. Poke a hole into the center of each one and then bake them all. Let them cool and then string them into waxed cotton cord.

A glitter star garland can be a really chic and glamorous decoration and it’s also easy to make if you follow the instructions on Heartmaggie. Here’s what you need: A4 gold glitter card, nesting star die, twine, a hole punch and square adhesive foam pads. Cut out stars and make sure you alternate their sizes. Then place the small ones on top of the larger ones and secure them together with foam pads.

The kids might enjoy helping you make the garlands so pick a design that’s cute and friendly. Perhaps you’d enjoy making the animal garland featured on nap-timecreations. You need red moose and white bear toys to make something similar but you can definitely improvise with other colors or animals. Use cord to tie them onto some string and form a garland or display them as individual decorations.

Another cute design that the kids might enjoy helping you with is suggested on Caughtonawhim. This is a garland of mittens. You can crochet these yourself or you can use the old mittens that your kids grew out of. It’s a really simple and really cute project.

When you get a living Christmas tree you also end up having all these trimmings and leftover branches. You can use these to make a lovely garland. A nice suggestion is offered on Makeandtell. Actually, these branches are dipped in paint. You can arrange them however you want and even combine them into a wreath if you prefer that.

We all know how to make an origami boat or something else that’s really simple. You can add to that list these cute little origami stars which you can combine into a garland for your Christmas tree. You can use printer paper or decorative paper. You’ll also need scissors, twine and a long sewing needle. The instructions can be found on Hellolittlehome.

We mentioned some time ago that you can turn dried citrus slices into ornaments. Let’s go back to that idea can see how you can use these slices to make a garland. It’s actually really simple. Cut some oranges or other citrus fruit into slices and bake these for a while or let them dehydrate. Then poke with a needle and some thread through each slice and tie a knot at the top. Display your garland. {found on makermama}.

Since we’re discussing citrus garlands and all, how about a gingerbread garland which you can actually eat? To make something like this you’ll need a gingerbread recipe, large letter cutters, twine, a rolling pin and a straw or a skewer. Prepare the dough, roll it out and cut out the letters you want to use. Make two small holes at the top of each letter and then bake them. Thread twine through the holes and make the garland. {found on hellowonderful}.

You may be familiar with popcorn garlands. They’re exactly that: garlands made of popcorn. You can use that idea to make something a bit more complex like a garland that features popcorn, cranberries and pinecones. We found a tutorial on Simplyhappenstance which explains how to do that.

If you like pine cones, you can create a garland using only those. It could be a nice idea to spray paint the pine cones. You could use two or more colors and alternate them as you thread them onto the garland. If you need more info on this, check out Simplicityinthesouth for a more detailed description of the project.

Multicolored garlands can really cheer up a Christmas tree and you can also display them in other ways as well. You could make such a garland out of lots of strips of felt. It’s a project that’s perfect if you have some leftover felt from other projects. Cut it into small strips and cut a piece of twine as long as you want the garland to be. Then start to tie the strips onto the twine, alternating the colors and the angle at which you tie them. {found on telllloveandparty}.

You can also play with colors if you make a tassel garland. Yarn tassels are really easy to make. You need yarn, scissors and a piece of cardboard or a book. Wrap some yarn around the book multiple times, pull it off and fold in half. Tie it off with a piece of yarn and then cut the loops at the ends. Fold downwards and wrap with string to create the tassel head. {found on farmfreshtherapy}.

Similarly, you could make a pom pom garland. Pom poms are a bit more difficult to make but if you have a pom pom maker that would greatly simplify things. In any case, after you have all the pom poms ready, thread some string through their centers and form the garland. Find the full tutorial of this quirky and simple project on Georginagiles.