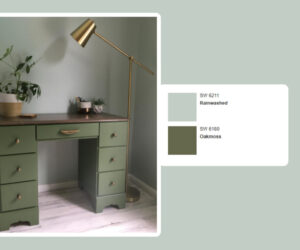 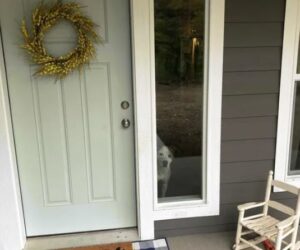 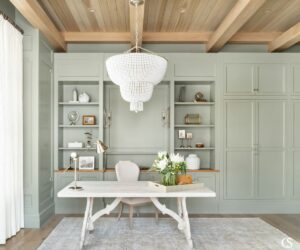 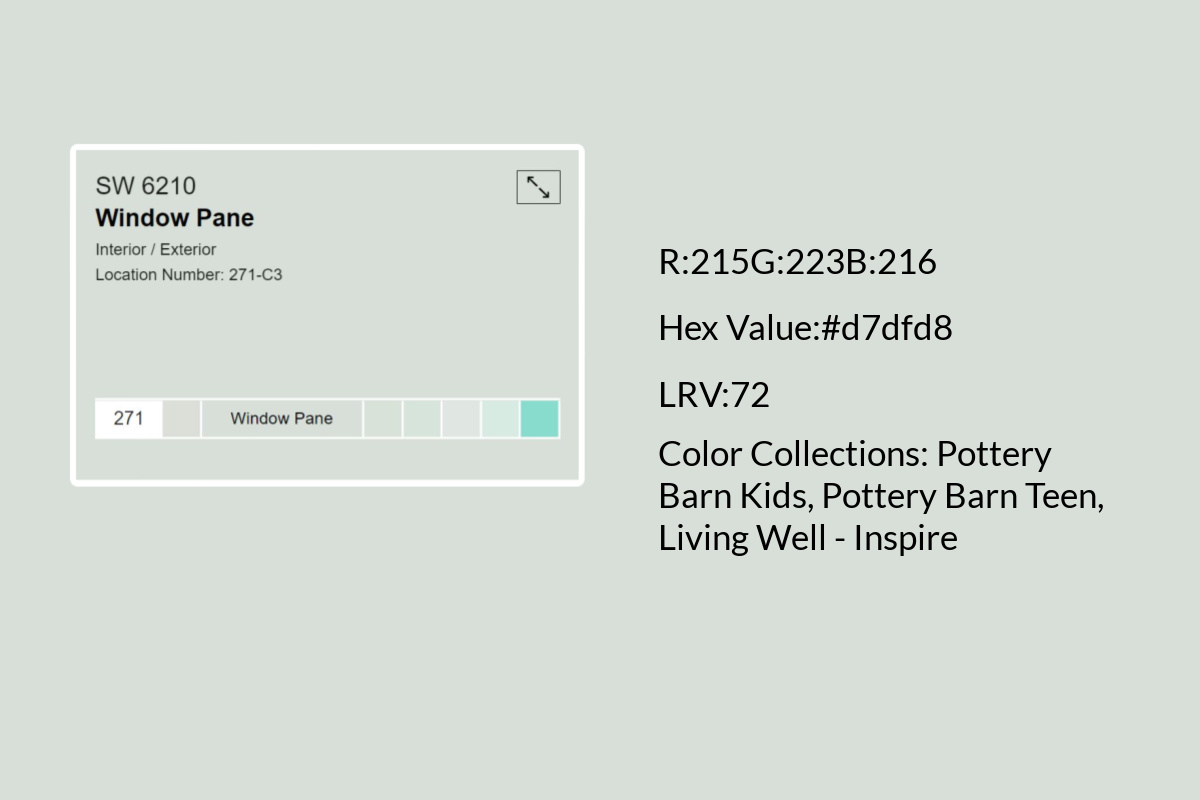 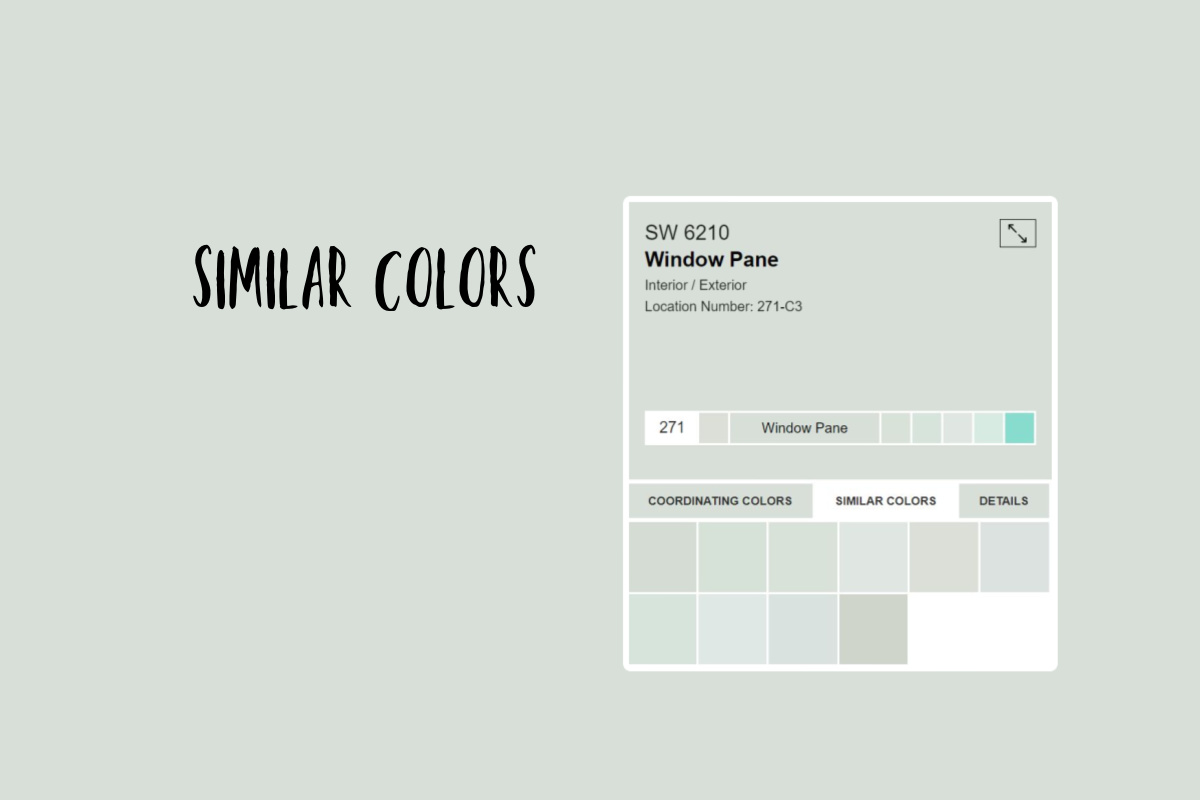 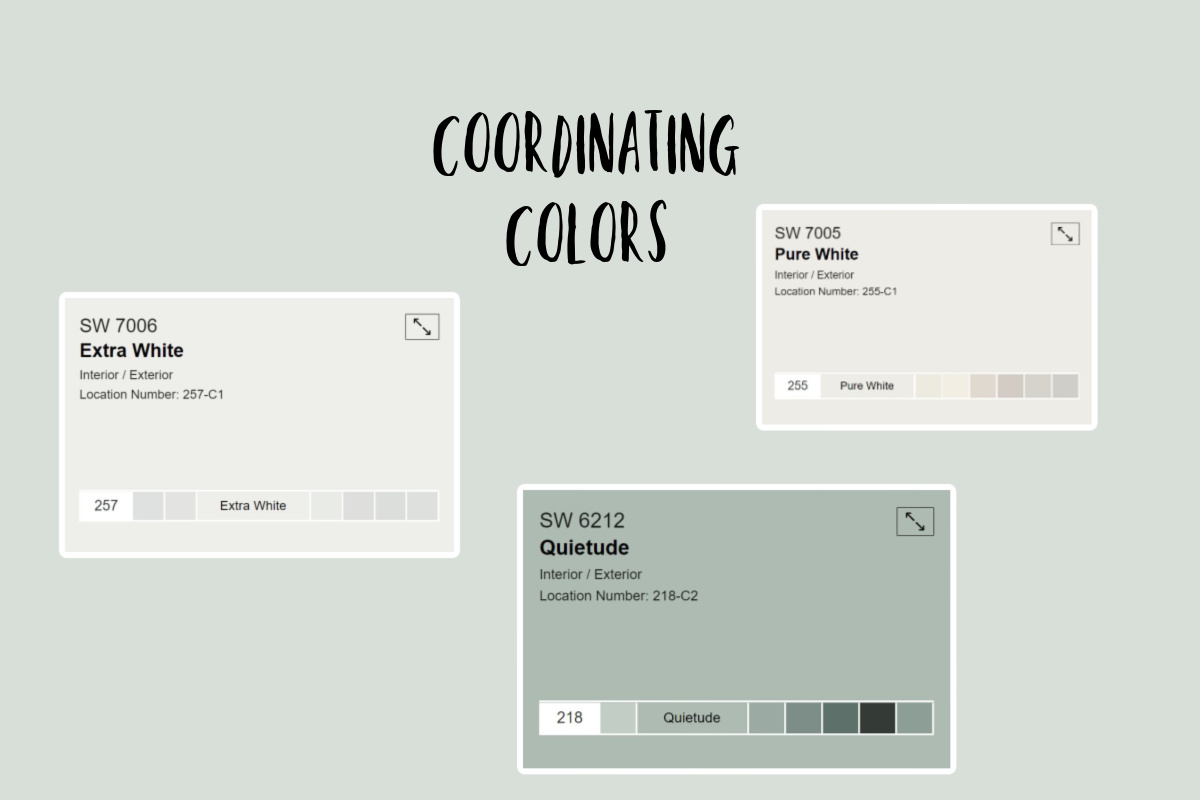 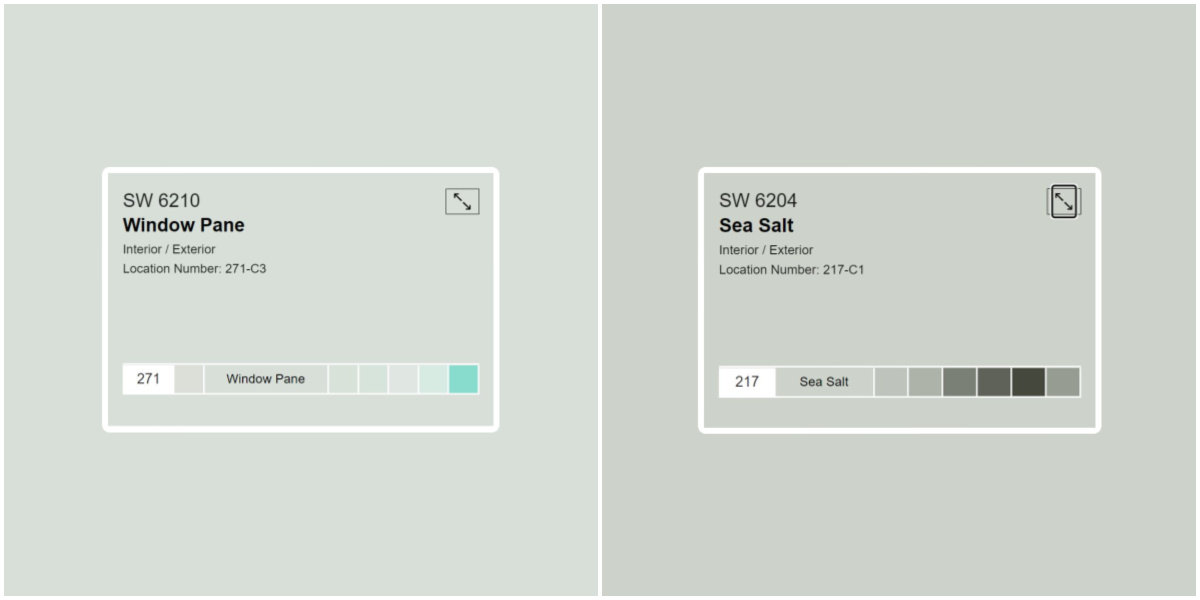 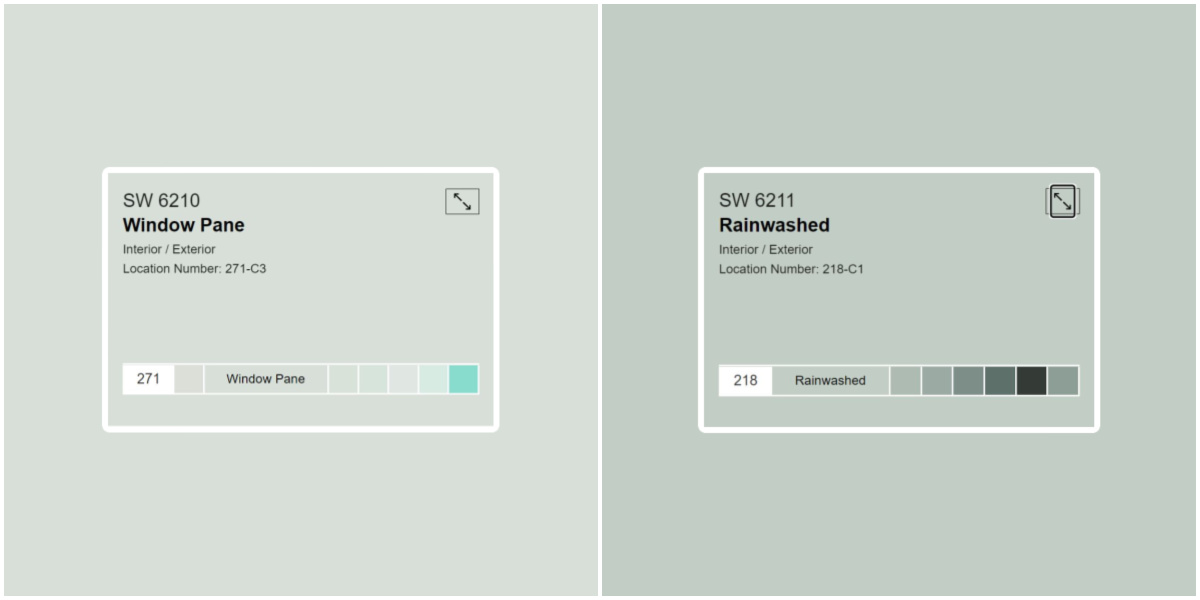 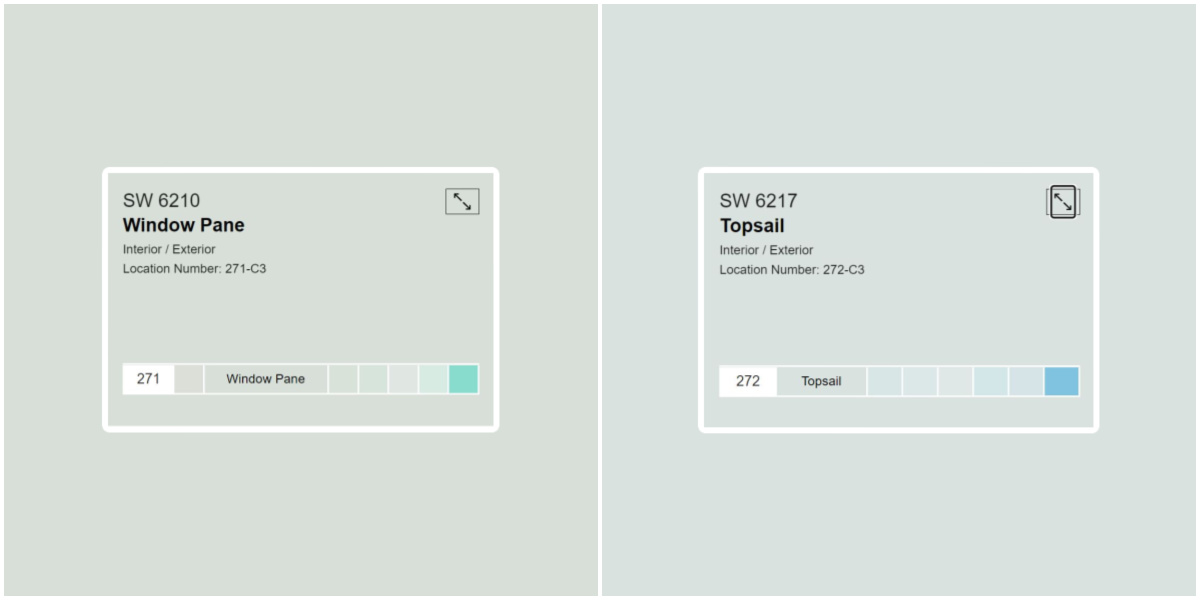 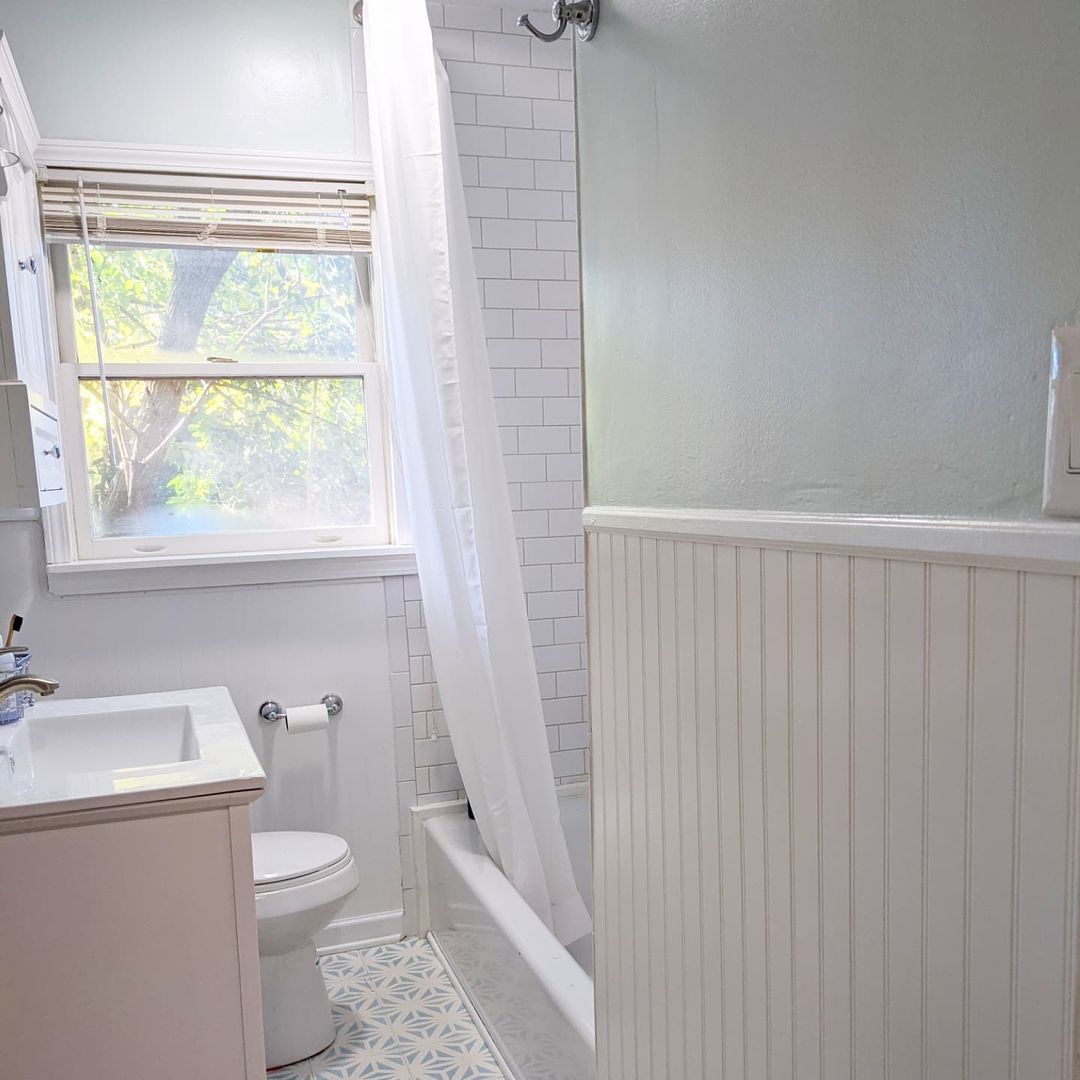 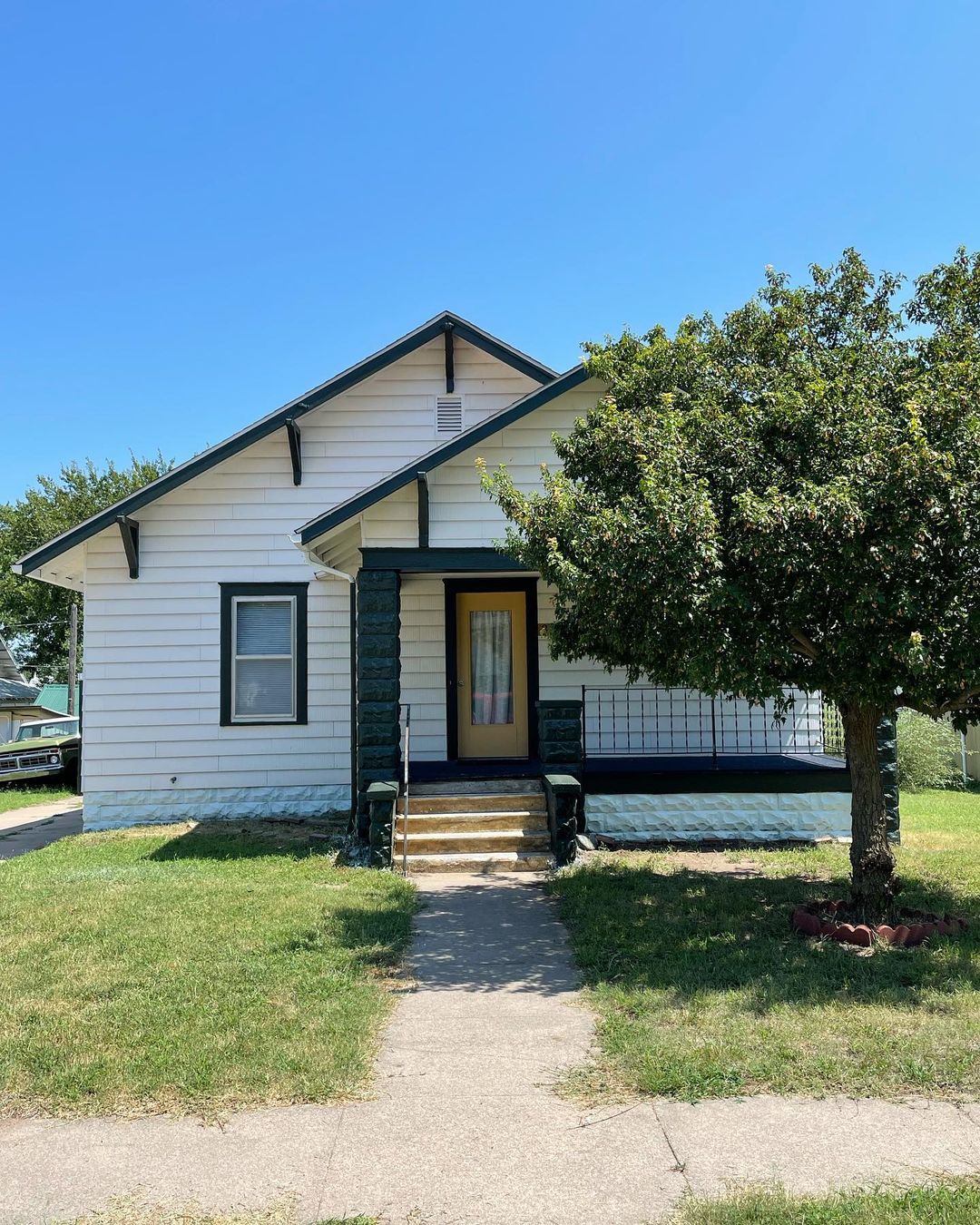 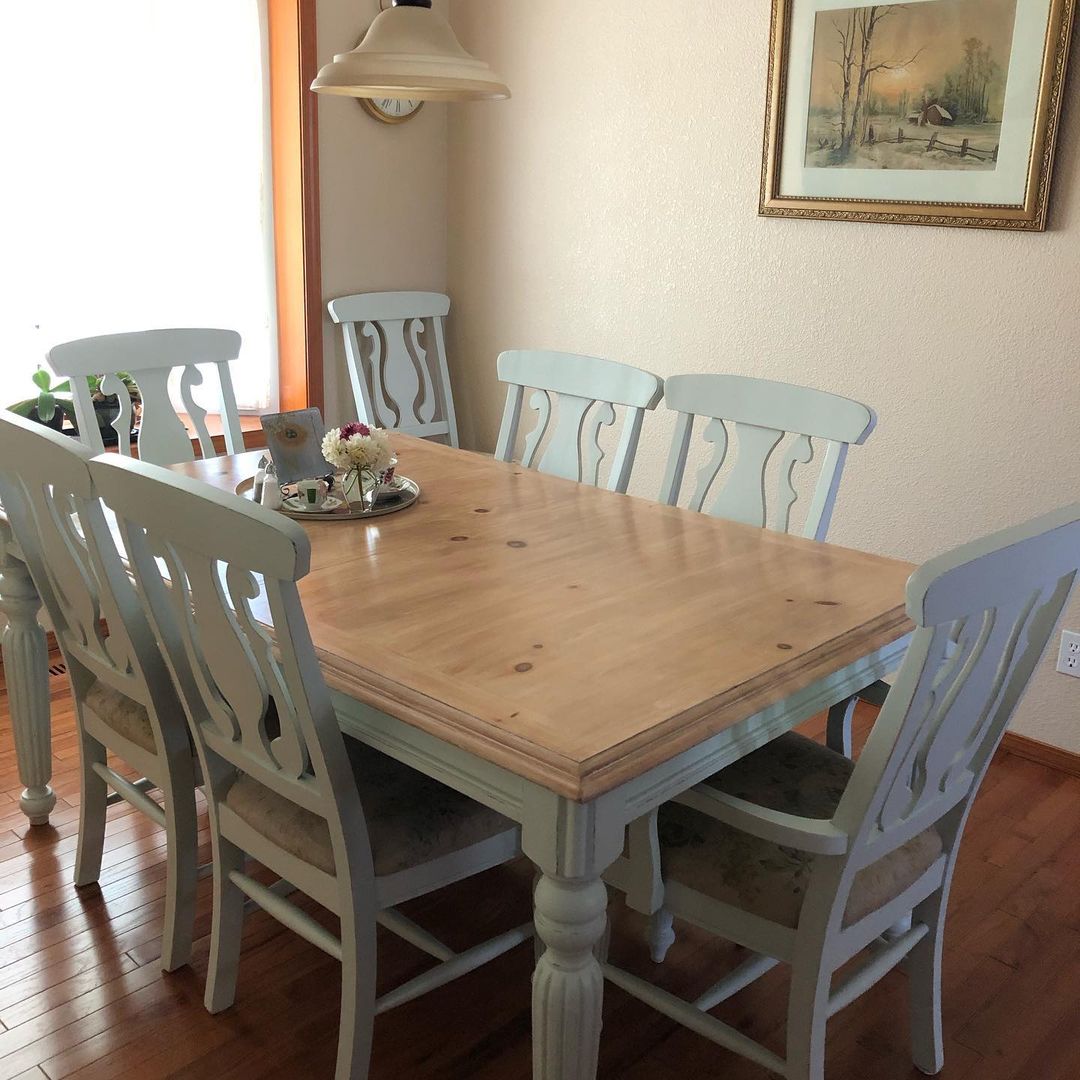 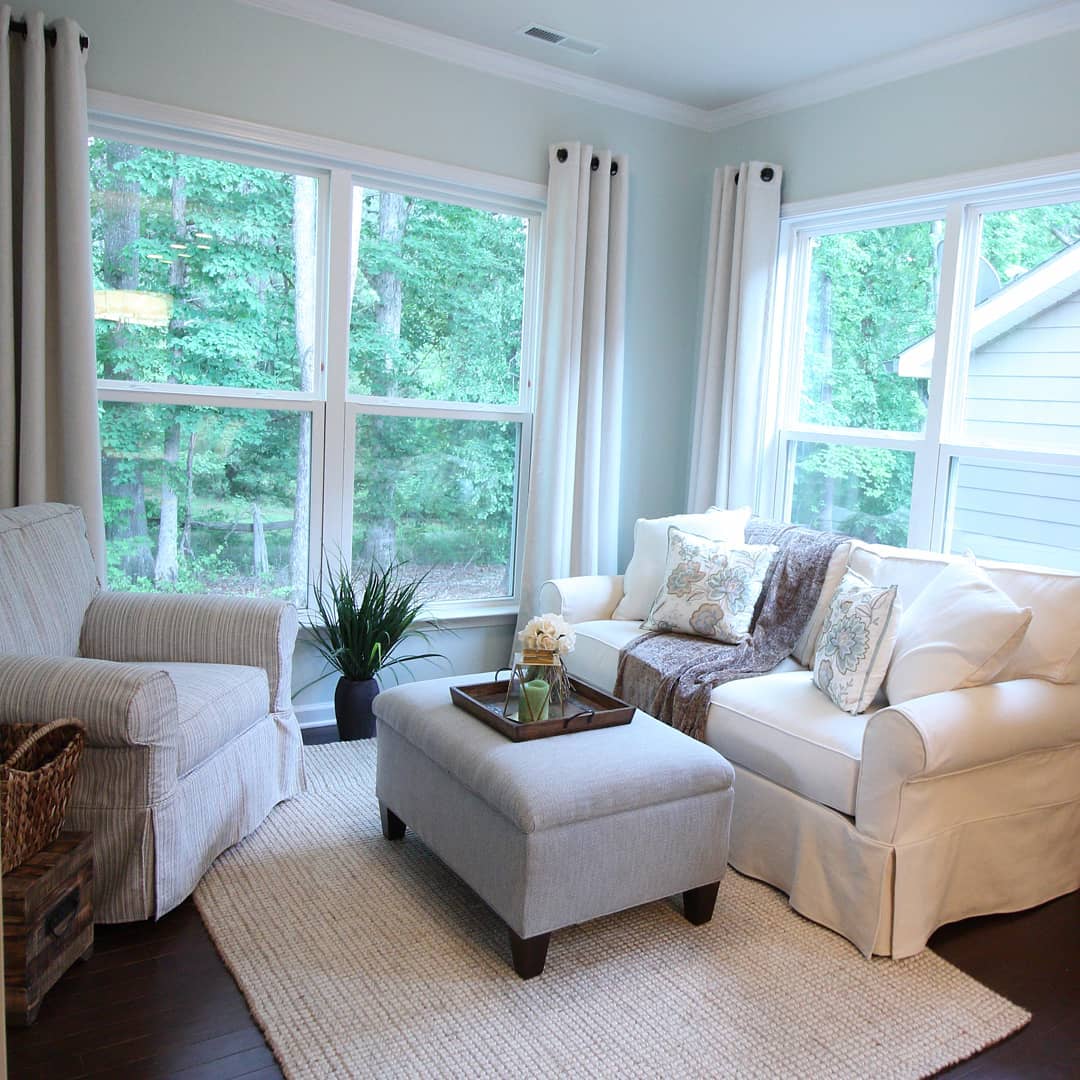 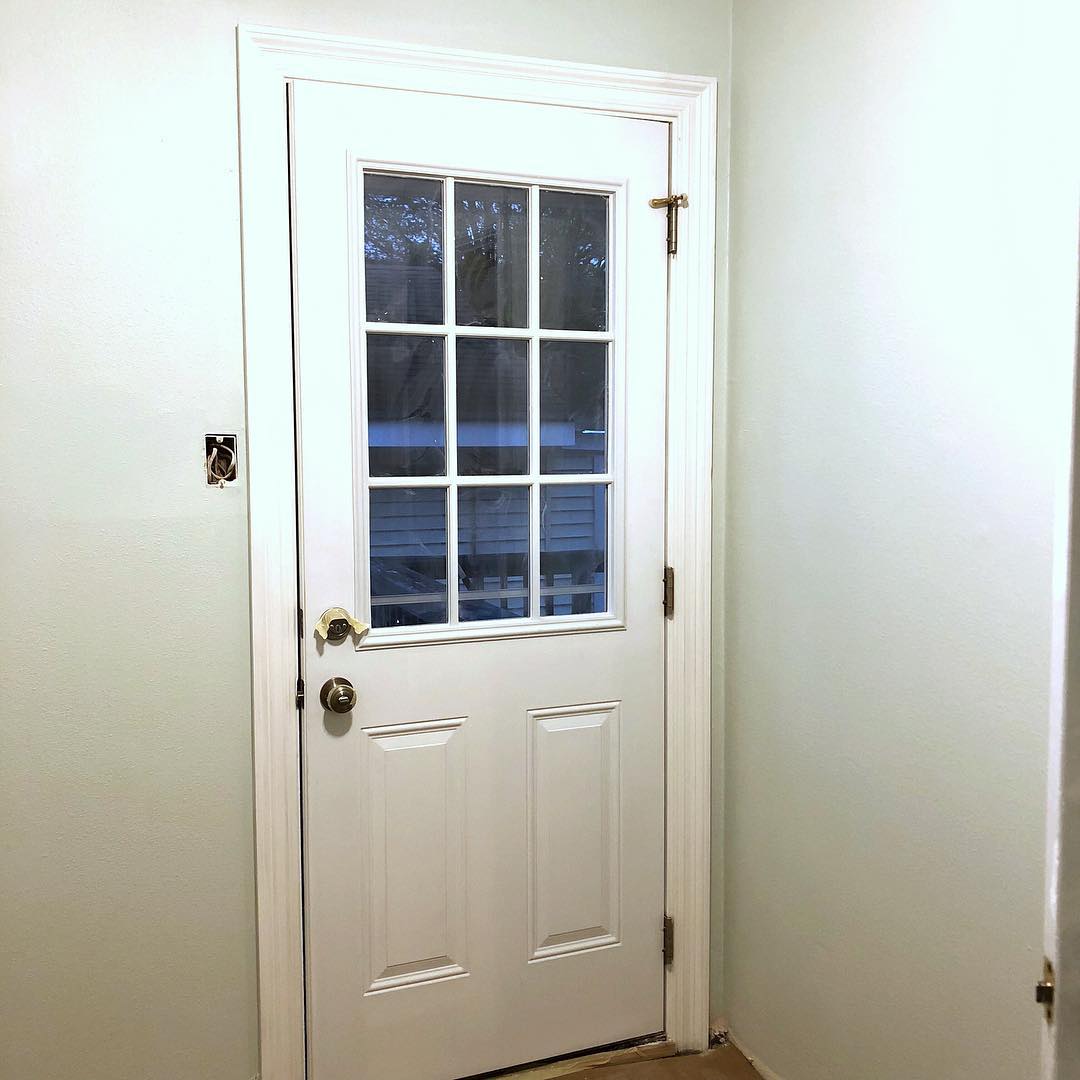 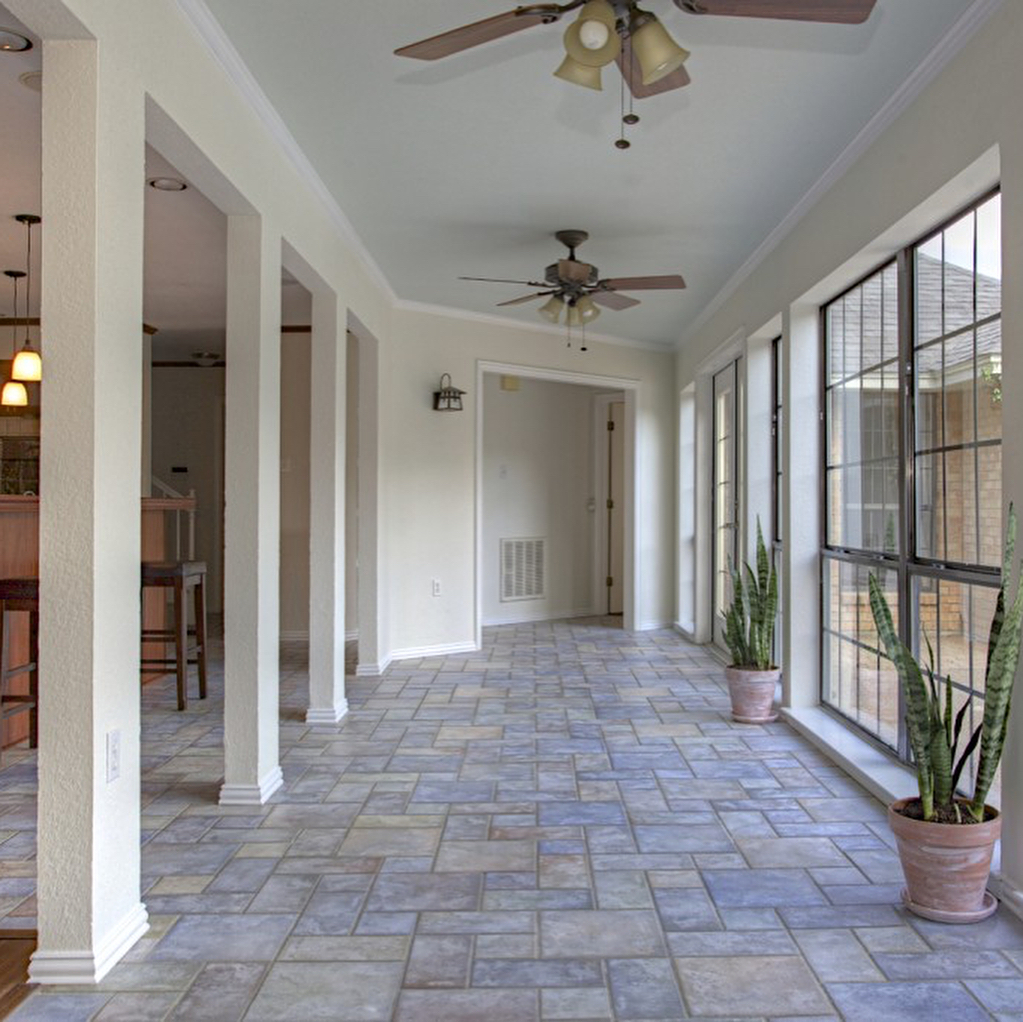 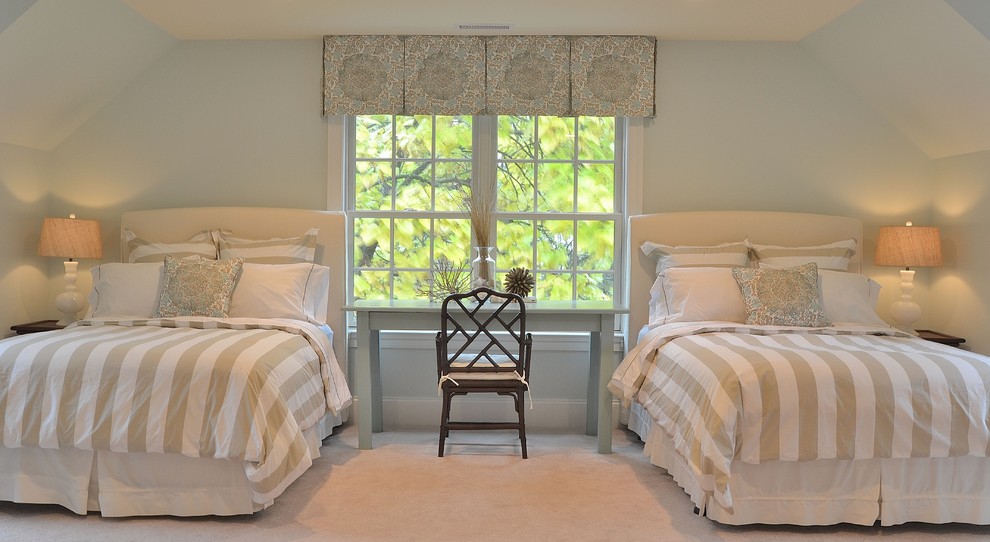 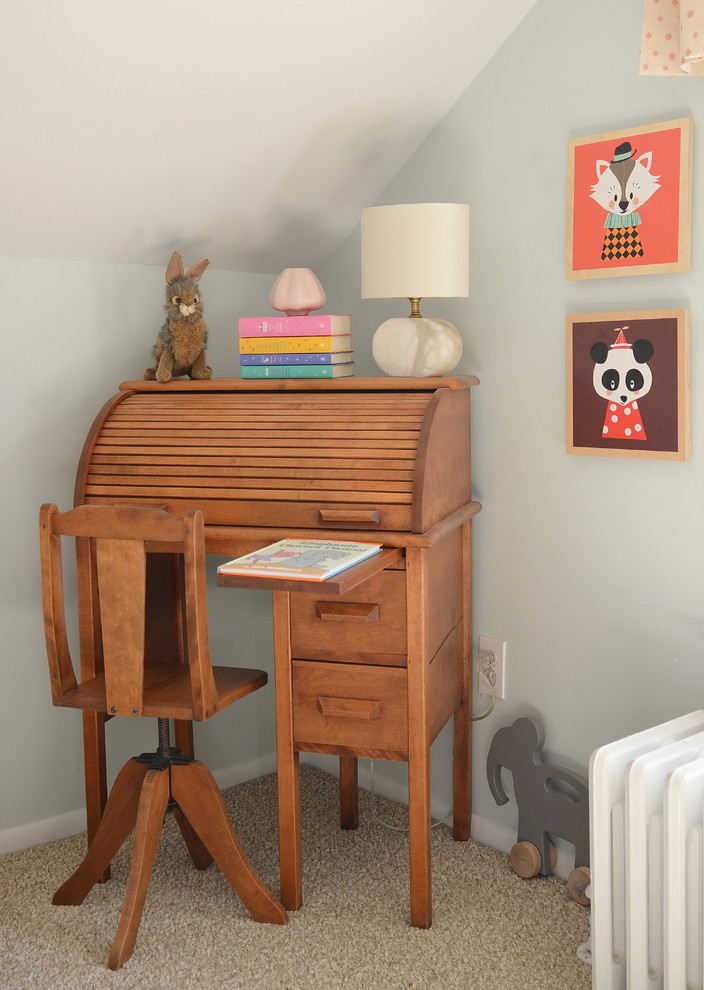 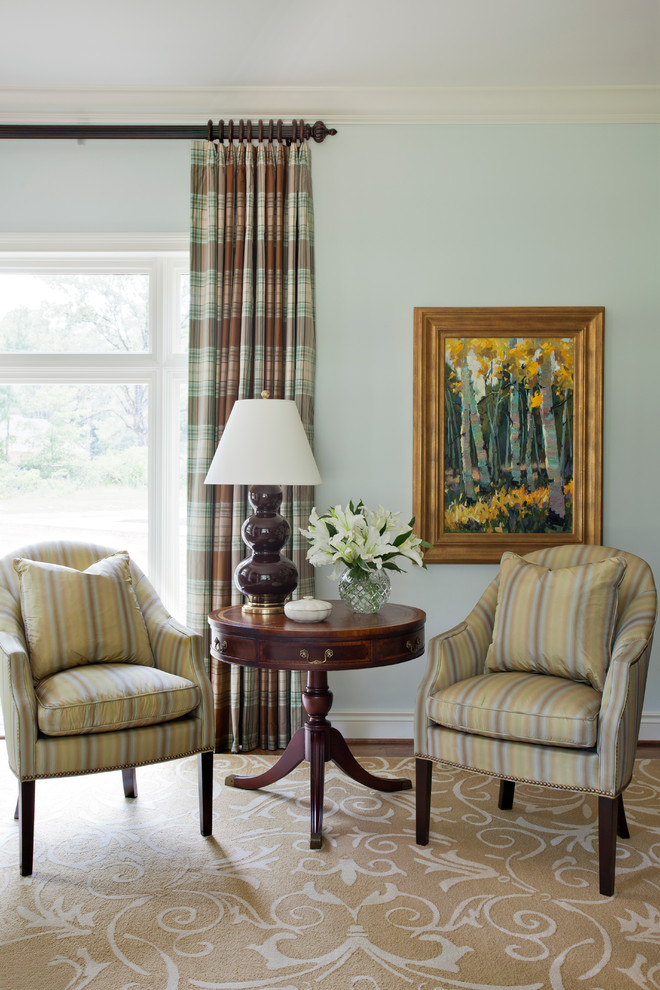 Sherwin Williams Window Pane is a light bluish-green paint color that brightens any room. The pale hue has a watery quality and a coastal vibe. Moreover, it works in any style of interior.

What Color is Sherwin Williams Windowpane?

Sherwin Williams Window Pane (SW 6210) is a very light blue green, although it can look like a pale green with a touch of gray. Like many of the similar colors, it can change with the level of light in a room.

Window Pane has a Light Reflectance Value (LRV) of 72, which is quite bright. The LRV scale runs from 100 to 0. At the brightest end is pure white with a rating of 100. At the opposite end is absolute black at 0. The higher the number, the more light a paint reflects.

Window Pane is a pale teal but it has prominent green undertones. In fact, it is on the same paint color card as Sherwin Williams Rainwashed. So, this paint is much the same color, just a little lighter.

You’ll have many choices of paint shades to coordinate with Window Pane. Many of these may be the same as those that go with SW Rainwashed.

Often, Window Pane looks like a white paint in bright rooms. By contrast, Sea Salt can look quite blue or green in a room, depending on the light. It also looks more gray compared to Window Pane.

As noted above, Sherwin Williams Rainwashed is on the same paint card as Window Pane.

The company called it a green paint color. However, it has a blue undertone that can make it feel quite a bit moodier.

Rainwashed has an LRV of 59, which is much darker than Window Pane. Thus looking for paint ideas that are more saturated, Rainwashed might be a better choice.

Sherwin Williams calls Topsail a “white and pastel” paint. It has deep blue and green undertones and appears stormier than Window Pane.

With an LRV of 74.67, it is little brighter than Window Pane. It is also more of a chameleon color. It can change its look based on the quality of light in the room.

As you can see, these paints have very subtle differences that can create very different looks in the rooms of your house.

Before you commit to a color, paint a test swatch of these Sherwin-Williams paint colors. Or order some peel and stick samples.

Never decide on a color choice on a photo or the on-screen representation of a particular shade. You want to see a swatch at different times of the day in your own space. The color will vary!

Window Pane is a pale hue but it is a greenish-blue. If you haven’t considered this type of color, you might not be sure how to use it. These examples will spur some ideas and inspire your own use of this Sherwin-Williams paint.

Give a farmhouse bathroom a bright look by painting it with Window Pane.

This example uses the paint above the wainscoting. It’s a perfect pairing with the white and brightens up the space quite a bit. The light color also gives it an airy feeling.

Window Pane is also a nice idea for the exterior of a house. In the plentiful daylight, it looks almost white.

This house has dark green trim which is an excellent match for the crisp look on the siding.

You might not consider Sherwin Williams Window Pane for a furniture refresh, but you should.

This dining set has a fresh, modern farmhouse look thanks to the soft green paint. It also goes nicely with the natural wood tones.

This soft, grayish blue-green makes a wonderful wall paint for a sunroom.

It’s not a stretch to call this a neutral paint.

The light in this entryway brings out the slight gray undertone. You can see in this photo how the paint looks grayer at the bottom of the wall and white near the top. You’ll see the same variations in your own house.

Speaking of Window Pane being a neutral paint color, here’s a great example of that.

The ceiling of the sunroom area is painted in this shade and looks wonderful. It is a good match with the other neutral shades. Moreover, the floor picks up the subtle grey tones in this color.

It’s not a commom choice for ceilings, but maybe it should be!

Another example of how walls painted in this hue look neutral is this traditional bedroom.

Yes, you see the hint of green in the paint, but it’s watery and light. With all the beige in the room, the paint can create a nice contrast and complement at the same time.

Sherwin Williams Window Pane is also great for a kid’s room. The paint is light, gender-neutral and great for any age.

Plus, the shade is versatile enough to match with brighter pieces of decor and art in a kid’s room.

This color can also work for traditional interiors, which is not an image you might have had for this paint color.

This living room has traditional drapes and furniture, which the paint livens up. It’s a nice refresh for an old-school space.

Sherwin Williams Window Pane SW 6210 is a soothing pale blue-green. It has green undertones but also a hint of gray.

What color is Sherwin Williams Rainwashed?

Sherman Williams Rainwashed is a green color. While it has blue undertones, it does not trend toward teal.

Sea Salt is a what many call a chameleon color. That’s because it is very cheangeable based on the quality of light. However, in general it trends toward being a cool color.

What undertones does Sea Salt have?

Sherwin Williams Sea Salt is a changeable color. It is a cool paint color that has green and gray undertones.

Is SW Topsail blue or green?

Sherwin Williams Topsail is a neutral paint with blue and green undertones. It looks clean and crisp and is popular for rooms that need a beachy vibe.

What is one shade lighter than Sherwin Williams sea salt?

Sherwin Williams Spare White (SW 6203) is one shade lighter than Sea Salt on the paint strip.

What is the most popular trim color from Sherwin Williams?

There are many different trim colors from Sherwin Williams that will work with all the popular shades. Some of he top choices include High Reflective White SW 7757, Alabaster SW 7008, Snowbound SW 7004 and Pure White SW 7005.