Narrow lot houses are quite rare. Obviously, the preferred alternative would be a more spacious home with a different floor plan. However, a narrow lot house does have its advantages, the most notable of which is the fact that it can fit in tight spaces between existing buildings or on unusually shaped sites. 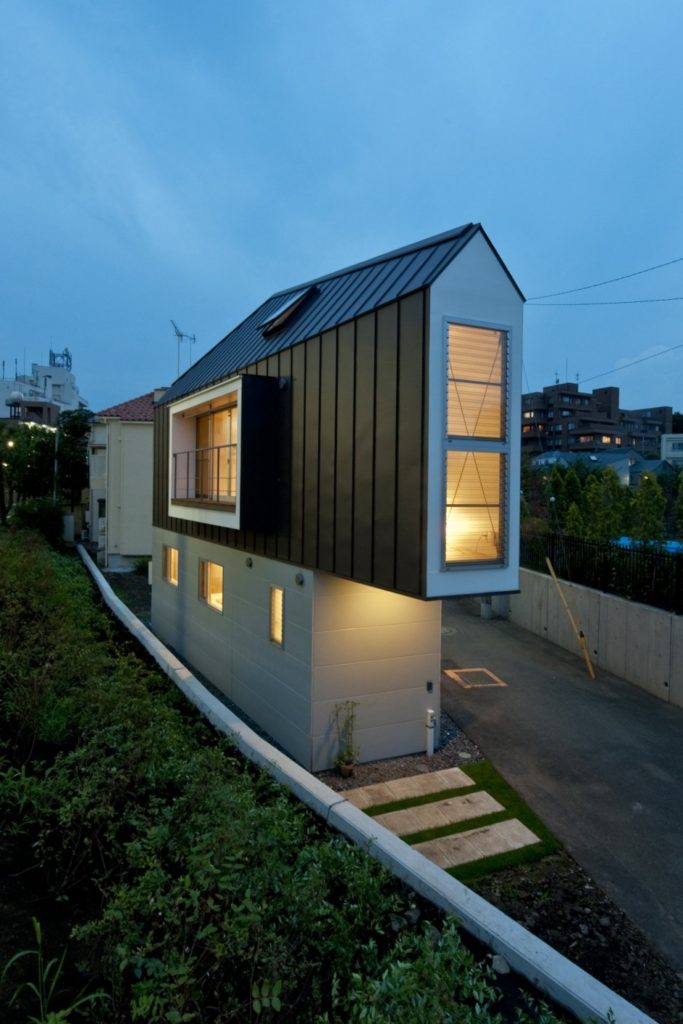 Both the architecture and the interior design solutions of such houses are curious and ingenious in order to allow their inhabitants to live comfortably without major compromises.

The Shaft House is a two-and-a-half-story residence located in Toronto, Canada and was built in 2010.It was a project by Atelier rzlbd. Even though quite narrow and built between two existing buildings on a 20 ft wide lot, the house has bright and airy interior spaces. What also makes the house stand out is its simplistic and modern design with clean, straight lines and angles that contrast with the neighboring homes.

This narrow house in Nada

In Nada, Japan, there’s a house built on a site measuring only 36.95 square meters. It’s tall and narrow and has few and small windows. Despite that, it looks very bright and open on the inside. Skylights let plenty of natural light in and the staircase and the layout allow it to reach the bottom of the house. A series of gaps and openings throughout the house further contribute to the openness of the house. This unusual residence was designed and built by Fujiwarramuro Architects.

Although usually, you expect to see a narrow house in between two buildings, that’s not always the case. The Promenade House by FORM_Kouichi Kimura Arcitects is a good example. The house can be found in Shiga, Japan and covers an area of 124.3 square meters. It’s sitting on a site that’s only 4 meters wide and 35 meters deep.

The shape and size of the site dictated the design and structure of the house. As a result, the architects built an intriguing house that’s 2.7 meters wide. All the rooms are spread out one after another along a long and narrow hallway.

Size restrictions were also a challenge in the case of this residence located in Tokyo. The house sits on a site that measures 2.5 meters in width and 11 meters in depth. The project was developed by YUUA architects who had to find a proper way to offer the inhabitants plenty of privacy without making the interior feel too cramped or tiny. To preserve comfort, the team chose a simplistic approach, using dark colors, lots of wood and giving the house a glass front facade, exposing it to the neighborhood.

The River Side House

The site on which the River Side House is built is shaped like a triangle. The house is located in Horinouchi and was built by Mizuishi Architect Atelier. The plan of the house was directly influenced by shape of the site. The ground floor has a smaller footprint than the rest of the house and is mainly used for storage. The rest of the spaces are situated upstairs and include and kitchen and dining space, a living area, a bedroom and a guest room.

The Brooklin House is located in Sao Paulo, Brazil and was designed by Galeria Arquitetos in 2008. It sits on a 5.5 by 33 m site and has an open plan ground floor. The aim was to create a space that would feel fluid and wouldn’t have any barriers. This strategy also allowed the house to be bright and open despite its unusual layout. The glass roof further emphasizes that.

The Courtyard House was designed by DeForest Architects and is situated in Seattle, Washington. It’s a beautiful waterfront home with a welcoming modern design. The indoor-outdoor connection is smooth and plays an important role in the whole design and layout of the house. In addition, the views and truly amazing. What’s surprising about this house, however, is its long and narrow structure. This option was chosen partially because it allowed all the rooms to offer panoramic views.

Few houses are as narrow as this one, even given the theme of this article. The OH House was designed by Japanese firm Atelier Tekuto and was built on an irregularly shaped lot 1.5 m lower than street level. The house’s entrance is on the lowest level and a set of stairs offers access to the upper floors. The clients also wanted the house to offer them maximum privacy and, as a result, there are few windows, most of which are small. The house’s exterior is black and contrasts with the white interior.

This house near the Swiss Alps

Built on a hillside on the foothills of the Jura Mountains, this is a house that knows how to make the most of the views despite its narrow structure. Expansive windows capture the views and bring the beauty of the surroundings inside the rooms. The interior of the house is organized in three individual apartments, each with high ceilings and all spacious and bright. Minimalism and neutral colors allow the interior of the house to look and feel large and airy while the windows and mirrors emphasize these elements. The house was designed by L3P Architects.

This three-story home in Toronto

A tiny lot can be just the challenge an architect needs to create something extraordinary. For example, this cozy home was built on a narrow plot in between two existing residences. Being narrower than a driveway, the site didn’t make the designing process easy. Yet this was only a challenge that allowed Donald Chong Studio to make this house in Toronto stand out in a unique and unusual way. Originally occupied by an old cottage, the site is now occupied by a modern three-story family home.

In some cases, a narrow house may suit its owners well at first but, at some point, could become insufficient. One example is this bungalow in Australia. Originally, this was a 20 ft wide structure. Then the owners went to Phil Harris from Troppo Archtiects for help. They wanted to extend their house. The architect extended it three feet out and this offered enough room for a guest bathroom and laundry room. The newly expanded house now has an asymmetrical design.