Australian architecture has generally been consistent with trends developing in the Western world, with a few alterations and adaptations created in response to the climate and the culture present here. During the 19th century the inspiration largely came from England and North America, with later influences from all over the world. The modern Australian houses of today are characterized by simplicity and are designed to suit the unique topography of the land. Here are some examples:

This is a family home designed and built by studio K2Ld. It’s a multi-generational house completed in 2015 and it has a very simple and modern appearance. The main focus of the project was on creating a strong connection between the house and its immediate surroundings as well as framing the beautiful views of the distant landscape.

The house features a stone-clad basement level which contrasts with the rest of the structure. It helps to ground the building and to give the impression that the upper floors are floating. On the outside, the outer shell of the house has a very clean, geometric appearance. The interior is bright and airy, featuring a nice combination of white and wooden surfaces.

Located in a rural area outside Ballarat, this modern family home occupies a gorgeous site where an 80’s house previously stood. It was a small A-frame house with a tiny interior. In its place, studio Moloney Architects built this large family home that is able to suit their clients’ modern lifestyle and which takes advantage of the site in a really great way.

The house makes the most of its location, featuring a cantilevered design that overlooks the valley and rises over the tree canopies. Up here there’s a special viewing deck designed specifically to take advantage of the panoramic view. The top volume also has two large voids which are meant to connect all the different interior volumes on a vertical axis, to create a strong connection between all the floors.

This modern beach house is located on Saint Andrews beach and was designed by architecture studio Woods Bagot. It’s a very interesting village mainly because it blends into the landscape in a seamless and very successful way. It becomes one with the surroundings and that’s largely due to the beautiful patina which the exterior has developed over time. At the same time, its design comes as a response to the quickly-changing weather conditions in this particular area.

Internally, the villa is organized into two main volumes. There’s the day area with the living room, kitchen, dining space and so on and there’s also the sleeping area comprised of all the bedrooms and other adjacent functions. The entrance area is quite impressive. It leads to a 24-meter deck with a large staircase leading down. The interior spaces are very welcoming, being designed with a lot of wood and natural, earthy colors.

In the case of this modern Australian house the challenge was to come up with a design and a structure able to take advantage of the beautiful location and to be suited for the coastal weather at the same time. The house was built for a growing family so it has to be somewhat flexible in order to suit everyone’s needs and to be able to accommodate the extended family and friends.

The house was completed by studio Bennett Murada Architects in 2019. They opted for a simple and timeless design which would be able to take advantage of the beautiful surroundings and to allow the focus to be on that rather than the house itself. They used sustainable materials and techniques throughout the project, acknowledging the natural beauty of the location. They gave the house a secret cellar situated in the basement and also included a variety of other interesting features throughout the spaces.

This house is located in Alphington, Australian and was completed by studio Austin Maynard Architects in 2014. It a single-family home structured into a series of separate volumes. The architects wanted to create a small community rather than a single compact structure so they built a tiny village for their clients. Constant communication between the architects and the clients was the key to success in this case.

The site was already occupied by a main house which was restored and updated. It contains two bedrooms for the kids, a bathroom and a series of living spaces. In addition to that, a new section was built. The newly-added functions include a studio, another bedroom, a bathroom, a kitchen and a dining area. The Tower House is a very fun family home both inside and out, with features such as a hammock floor and climbable furniture.

This is a house that’s been recently renovated and expanded. It was a project completed in 2017 by studio Jackson Clements Burrows Architects. Originally, the house was dark and has almost no ventilation which didn’t really help it in any way. The goal here was to transform it into a bright and airy home, a space that’s enjoyable and a please to live in.

The initial floor plan was very segregated, being made up of numerous small areas with awkward transitions between them. The new design features an open space approach and adds a series of new areas. The new addition is a two-storey section which mimics the aesthetic of the original house but in a more modern fashion. It lets in lots of natural light and enjoy a close connection with the garden.

Although it looks very modern, this house isn’t a very recent project. It did go through a serious renovation in 2016 which brought a few important changes. Among those was a roof deck which was added behind the heritage parapet. This imposed a few changed to the roofline which the local council was reluctant to allow. The architects at MMAD Architecture also faced some other challenges throughout the project.

Another important step of the project was the restoration of the original 100-year-old chimney. It had to be stabilized with steel beams in order to retain its structure. The biggest changes were made to the interior of the house. The focus was on the center of the building which now features a double-height space filled with natural sunlight. A set of stairs acts as dividers, separating the house into distinct areas.

The Compound House by March Studio

This is a house defined by contrast. It was designed and built by March Studio in 2017 and is located in Melbourne. It has a strong industrial character, reflecting the owner’s background and predilection for this style. Overall, the house is a beautiful amalgam of different textures, forms and materials with a focus on the contrast between light and shadow and other opposites.

The house feature concrete retaining walls and triangular trusses and features steel as the primary building material used throughout. The upper and lower floors are visually separated by a series of oversized trusses which create a split, giving the impression of a floating upper level. Overall, there’s a very strong industrial vibe reminiscent of structures such as warehouses and bridges.

As is the case with many modern houses all around the world, this Victorian house from Melbourne got a makeover and one of the key objectives of the project was to ensure a stronger and more natural connection between the indoor and the outdoor spaces. The team at Pitch Achitecture + Developments made that happen by building an extension along the northern section of the site, a volume which gets lots of direct sunlight and which includes an area with translucent walls, sort of like a lantern box.

While the front of the house remained mostly unchanged, the rear was totally transformed. It became more functional and better connected to the outdoors, the designers making sure to seamlessly blend the interior spaces and the garden. A new dining area with a fireplace was created. It has access to an outdoor lounge space with a bbq and a kitchen which is ideal for entertaining.

Here’s yet another amazing Australian house, this time found in Anglesea. It was originally built in 1988 and recently got a makeover by Atelier Wagner. It wasn’t just a simple renovation. The owners wanted to add a second living space and to reorganize the existing spaces in order to make them more efficient. During this process, the architects reconfigured the entryway and seeked to reduce the impact that the sea breeze had on the garden.

The new living space has access to the rear garden. There’s a large cedar door separating this space from the new entryway. The lower level of the original house has been reorganized and that allowed an addition bathroom and new entry to be created. Of course, we should address the unusual and eye-catching concrete shell surrounding the new section. It gives the house a strong industrial allure and although harsh it does create a rather inviting design. 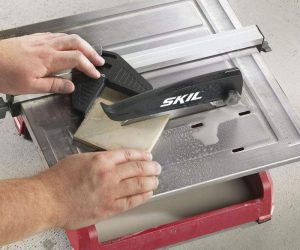 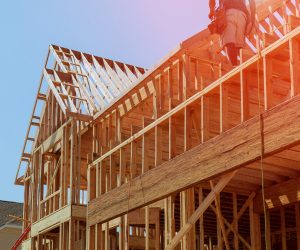 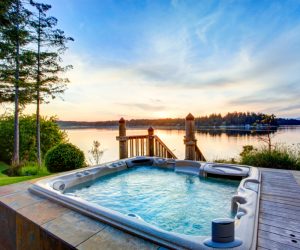 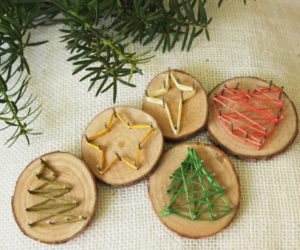