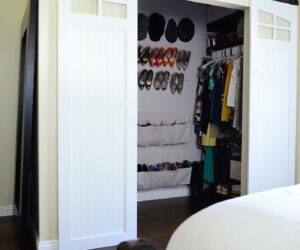 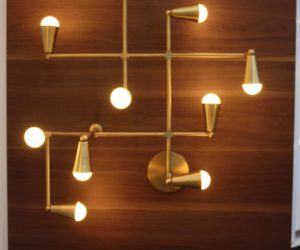 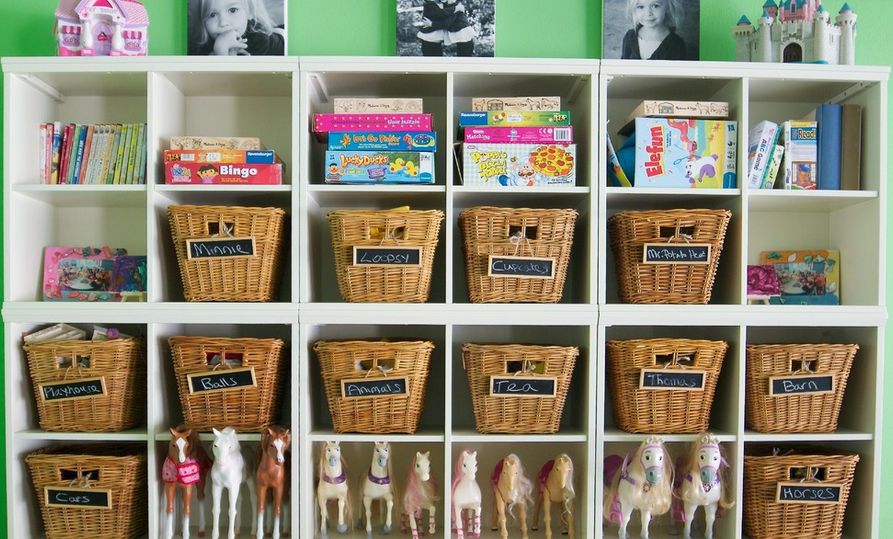 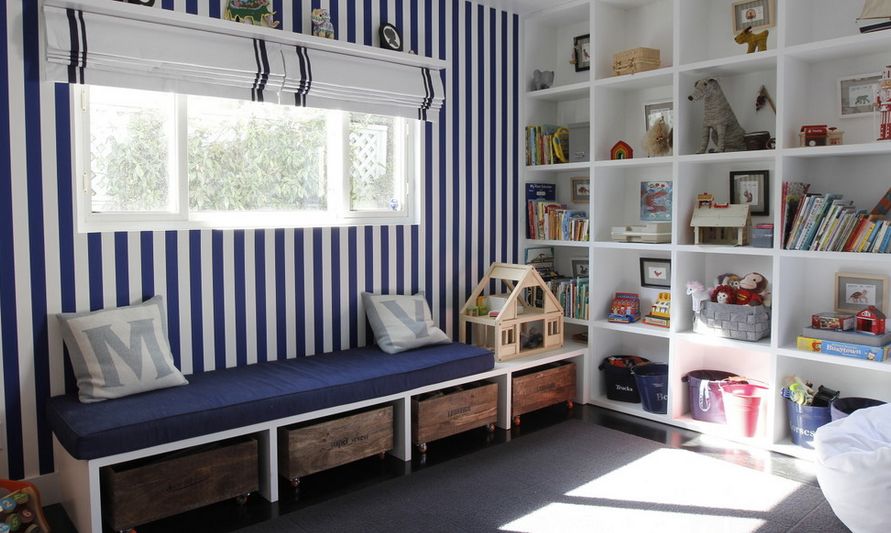 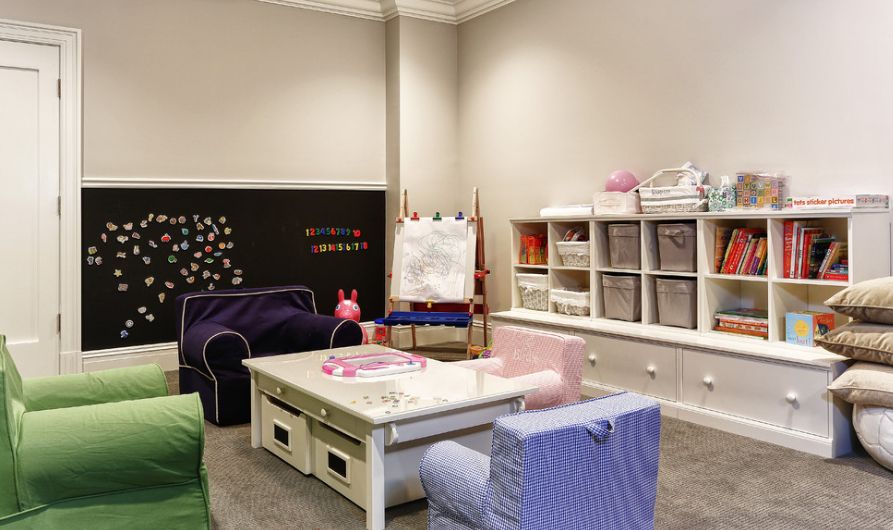 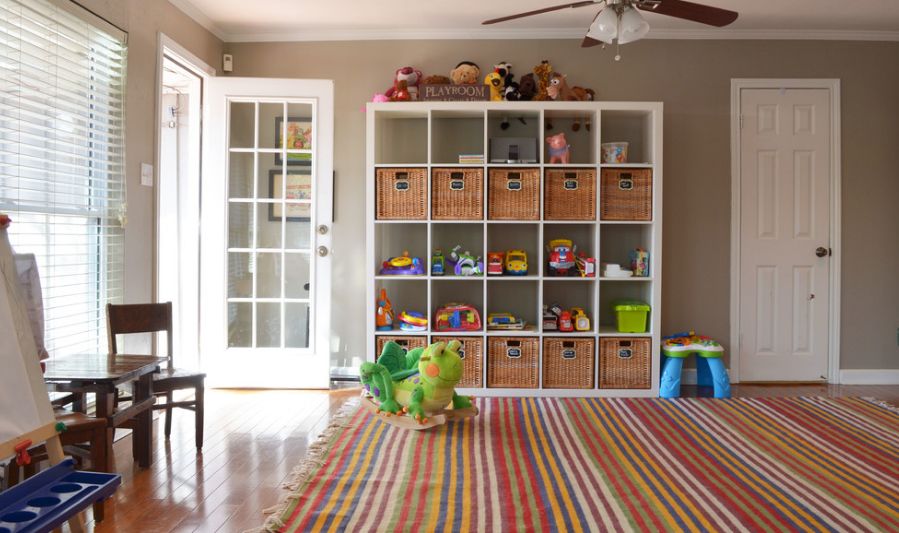 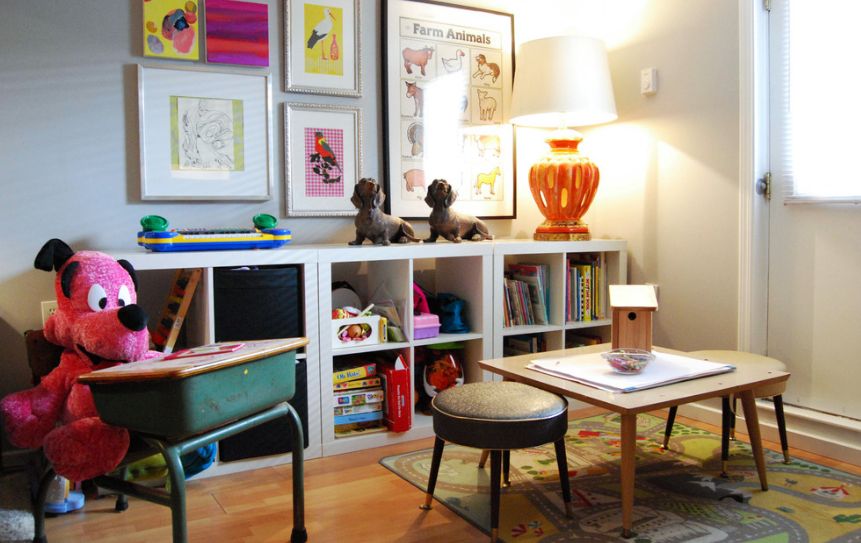 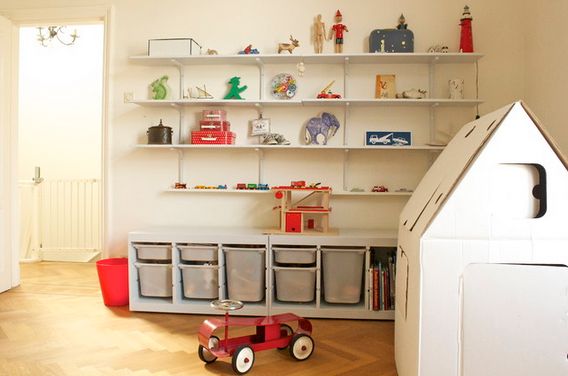 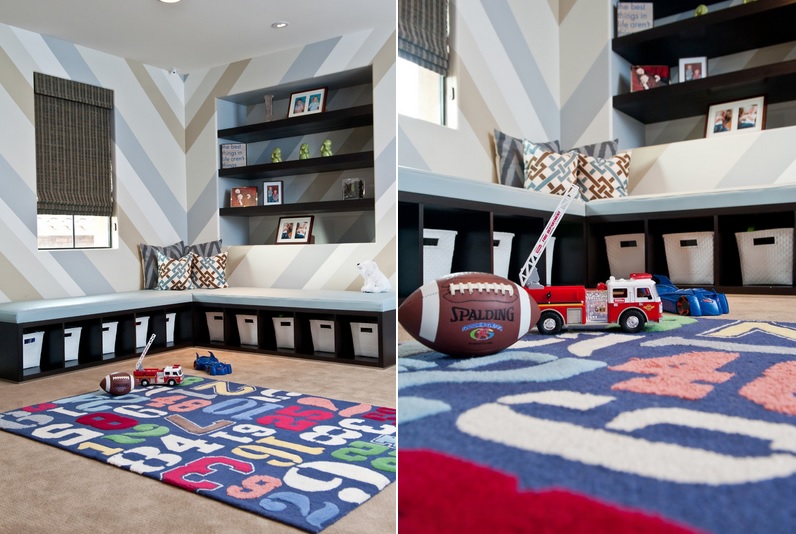 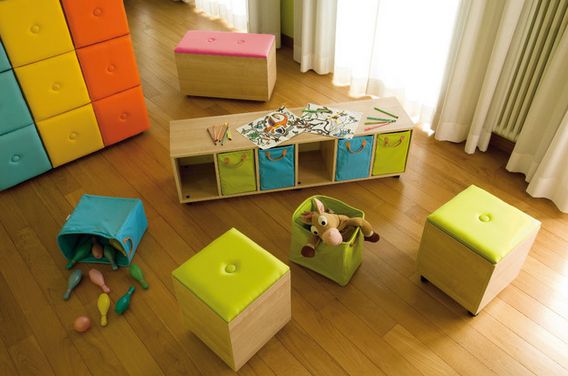 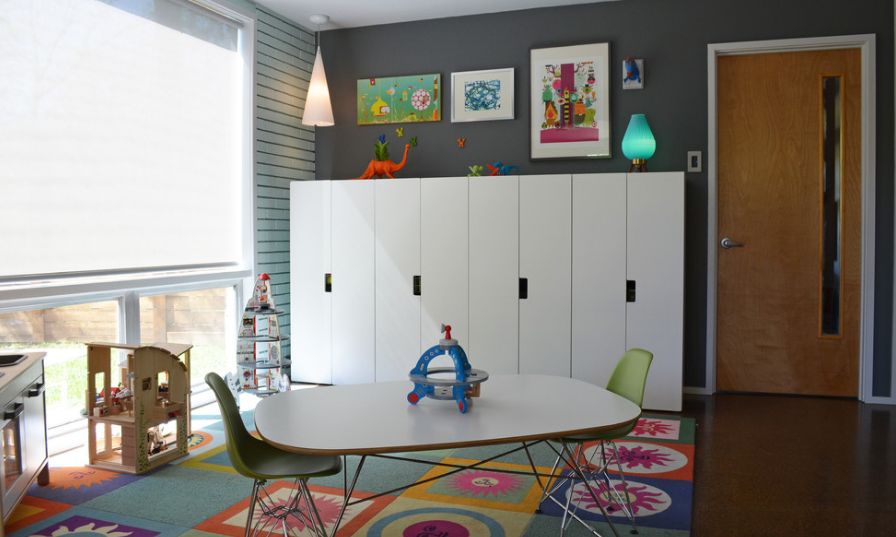 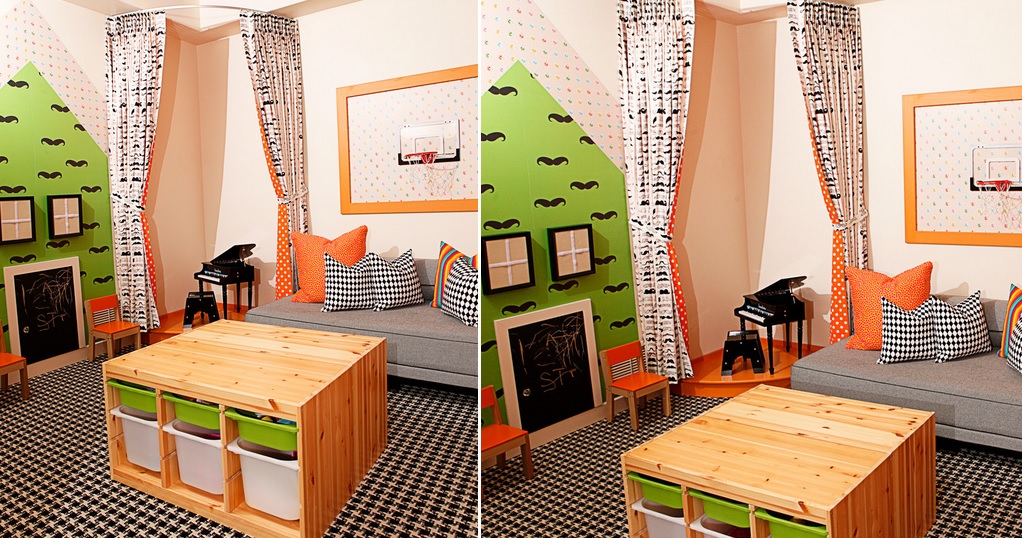 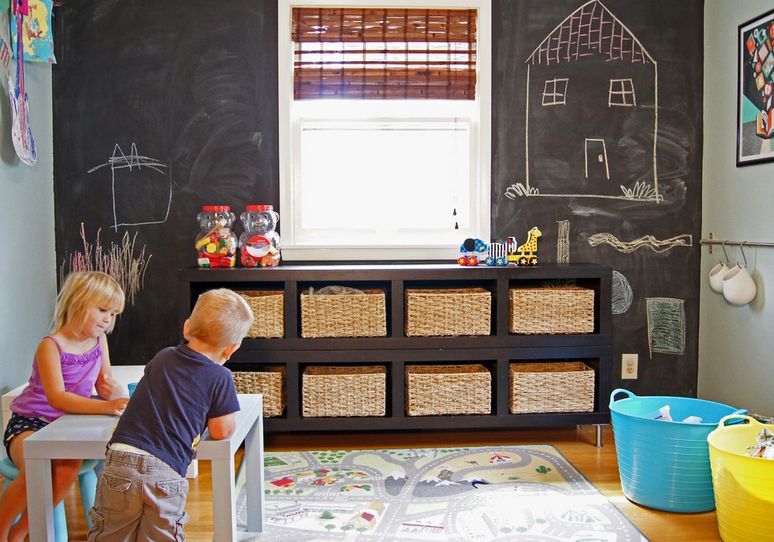 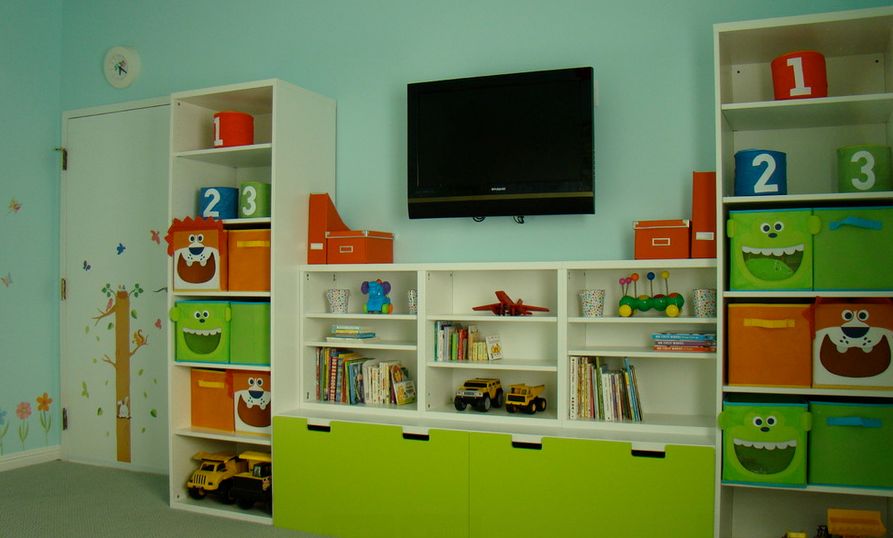 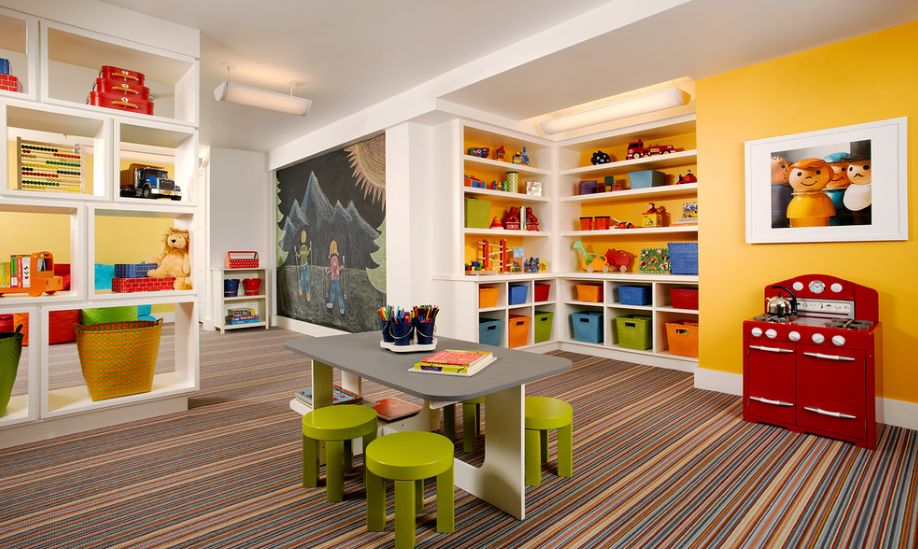 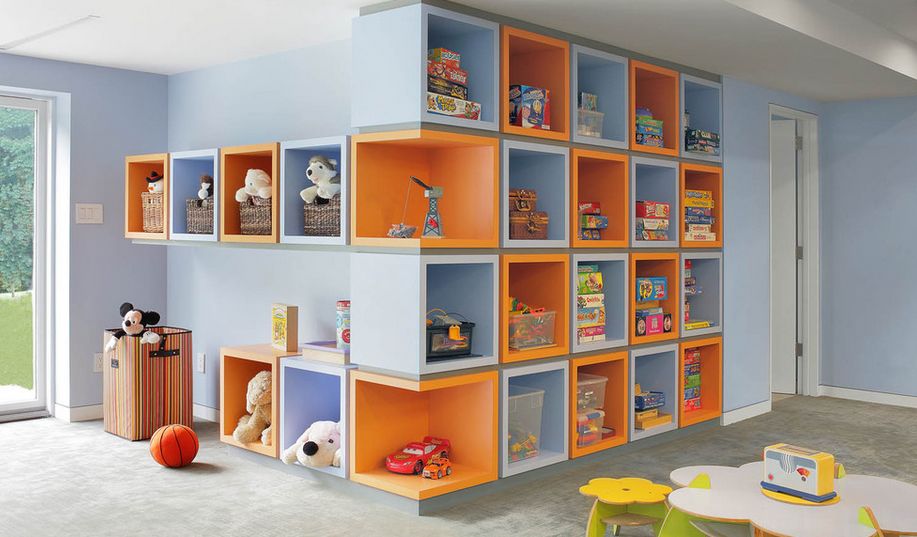 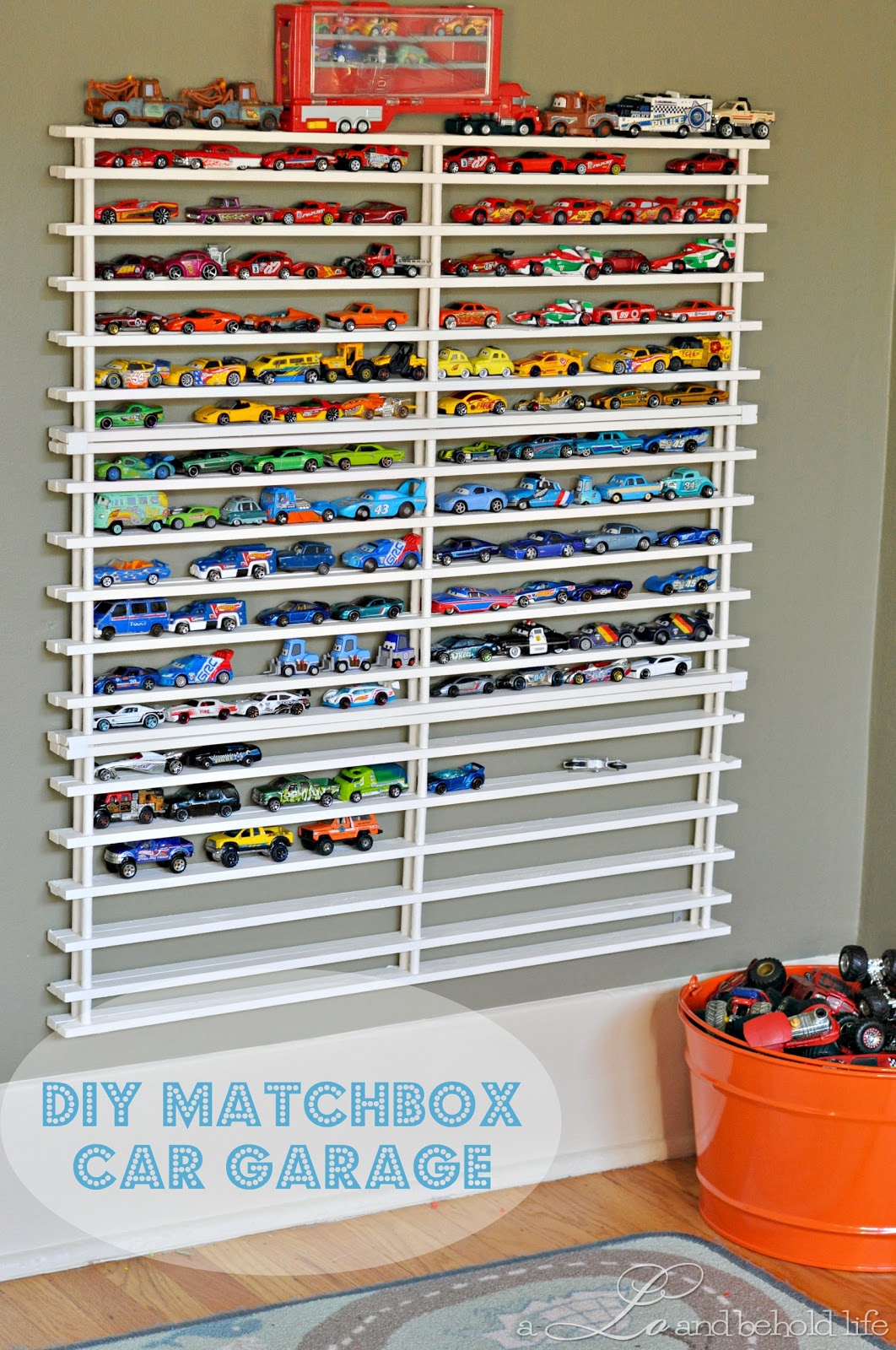 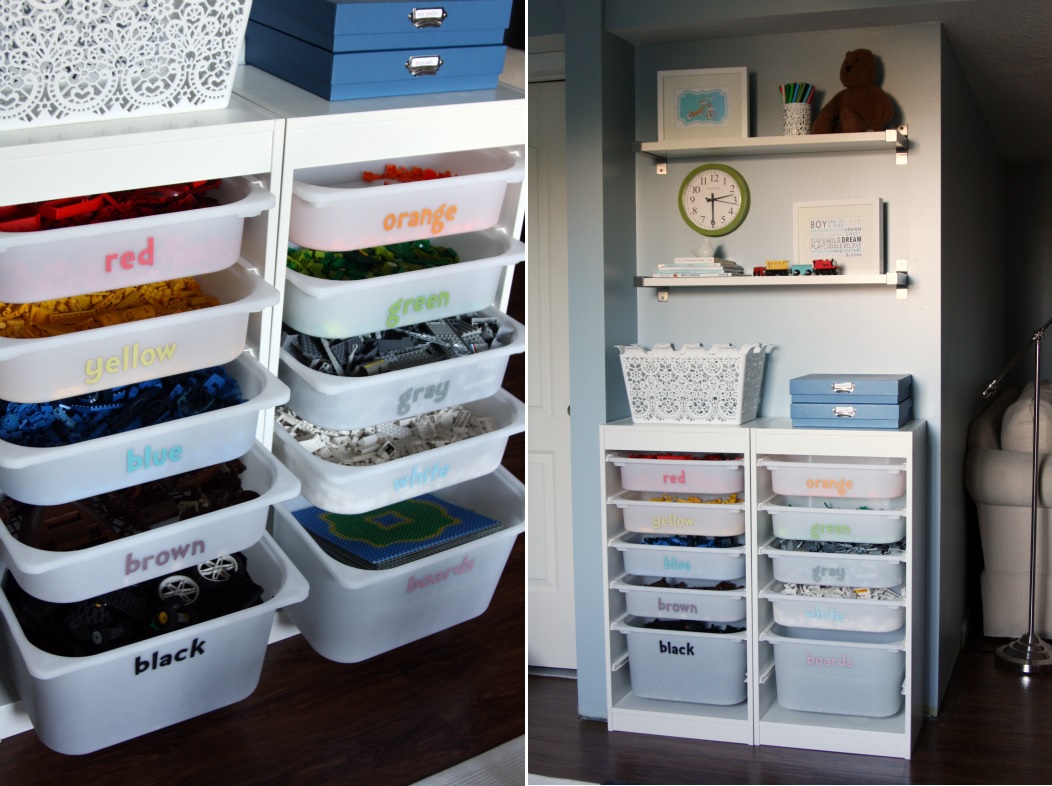 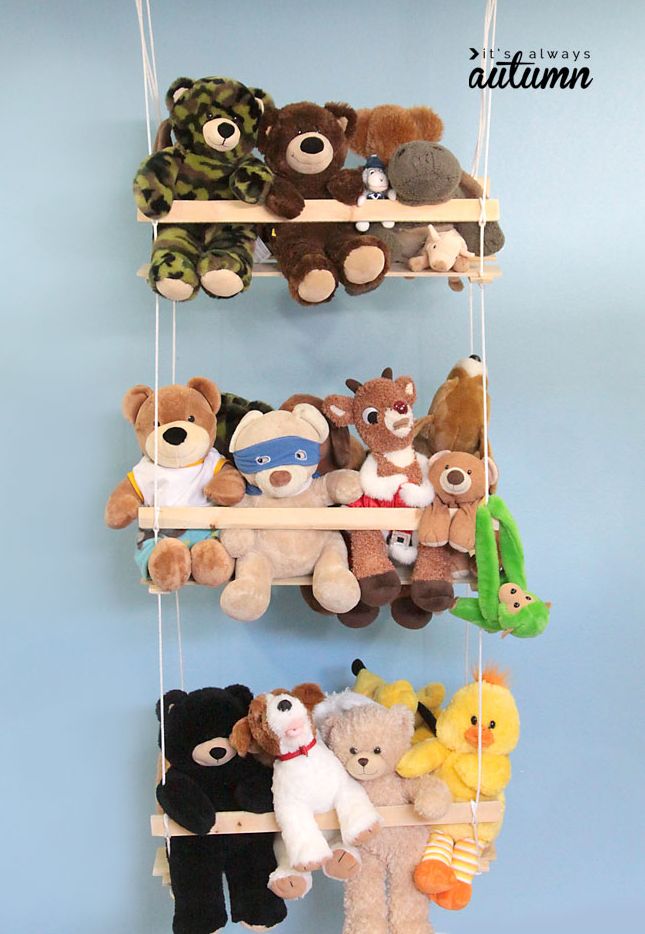 Any furniture that’s intended to be used by kids should follow certain guidelines. For example, it should be easily accessible and safe to use. Playroom storage offers a variety of suitable possibilities. The ideas and designs gathered here focus on simplicity. They’re meant to be practical and to stimulate the kids to be organized.

A good example of simplicity and functionality is a storage unit made of several smaller cabinets with open cubbies. When put together, these three pieces look like one and the cube compartments can be used in combination with storage baskets.{found on anthologyinteriors}.

A large shelving unit that covers an entire wall can be space-efficient, although the kids will only be able to use the lower ones by themselves. The upper shelves can be for display and can hold items that are rarely used.{found on tessbethune}.

On the other hand, if you want the whole unit to be accessible to the kids, think of a long and low one, like a tower unit placed horizontally. It can have drawers on the bottom and open cubbies at the top.

Playroom are full of toys and all sorts of kid-related things. Obviously, you need an efficient way to store all of these things. An Ikea Expedit can be a good starting point. You can have several put together to form a larger unit.{found on sarahgreenman}.

Or use small Expedit shelving units to create a low storage system where the kids can keep their toys, coloring books, board games and other things. The top can be used as a display area or it can hold a lamp, a vase and other similar things.

For the sake of diversity, you can use a mixture of open shelves and drawers or cubbies. The lower potion can also double as a bench for the kids to sit on. The shelves are perfect for storing and displaying stuffed animals and toys in general.

This playroom also offers diverse storage options. The custom corner seat has built-in storage with compartments for storage boxes and the custom floating shelves are built into a wall nook and are mostly for display.{found on redeggdesigngroup}.

Small units such as this one can be multifunctional. They can double as benches or even as tables. In addition, if they have castors the kids can move them around and reorganize the space however they want in they need more floor space to play.

Don’t want everything to be in plain sight? Use a storage unit that hides everything behind closed doors. The Stuva unit from IKEA is an ideal example. It’s a storage piece that’s low enough for the kids to use it comfortably and it’s also really good-looking. Use as many as you need.

A similar example can be this compact unit that basically looks just like a coffee table. It has built-in storage where you can put boxes or baskets filled with small toys and other things. It’s a piece that allows you to decorate the playroom in a more grown-up and chic style.{found on marymeinzdesign}.

Place the unit wherever you think it would be most practical, such as near the area where the kids like to play so they can easily find their toys and games and then put them back together and clean the room by themselves.{found on windandwillowhome}.

Several individual units can be combined in a way that makes sense for the playroom, its layout and dimensions. Mix and match vertical and horizontal storage and offer several options for the kids to choose from.{found on alinadrugainteriors}.

Corners are often overlooked and, in a playroom, turning them into a storage area is a really practical idea. One option is to have corner shelves built in such an area. Once again, include various possibilities such as cubbies and floating shelves.{found on billposs}.

Exterior corners can accommodate storage cubbies as well. These orange and blue ones and arranged in a simple but very fresh pattern and the fact that the wall color matches some of them perfectly allows them to integrate really well into the room.{found on eisnerdesign}.

Of course, the storage options differ with the type of items that need to be stored. For example, if the kids have an extensive toy car collection, you can opt for something like this: a wall-mounted car garage that keeps everything organized in an aesthetic way.{found on aloandbeholdlife}.

If you need to storage and organize a lot of Lego pieces, we suggest to use this type of storage unit with containers that easily slide in. label each one and organize the Lego piece by color or any other way you see fit.{found on iheartorganizing}.

Stuffed animals can sit in a swing on the wall. It’s really easy to build with some rope or cord and some wood strips. Don’t they look really cute? Surely the kids will love the idea.{found on itsalwaysautumn}.

If the playroom is organized pretty much like a living room, you can have things like books, drawings and even some toys organized in boxes that are part of a coffee table’s design. Or perhaps you can do this in the actual living room.{found on hertoolbelt}.