Hawaii receives huge numbers of visitors every year, tourists who are attracted by the warm year-round weather and the unique culture of this region. It’s also the beautiful landscape and the gorgeous views that attract lots of visitors from all over the world. 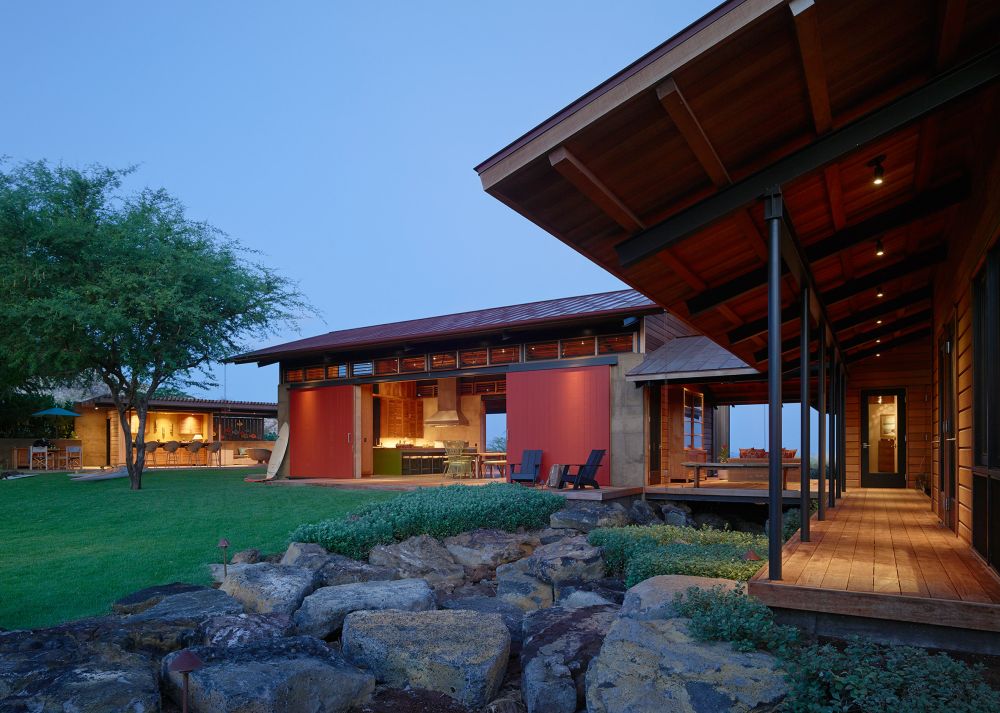 These are also elements cherished by the locals and it’s no surprise that Hawaiian architecture has evolved to show great respect to its surroundings and to take advantage of the uniqueness of this place. Let’s have a look at a few houses located in Hawaii and get a better idea of what makes them special.

Famous architecture studio Olson Kundig worked in 2018 on a beautiful project in Hawaii which consisted of a contemporary house with a design inspired by the local vernacular. Natural ventilation is commonly a part of most houses in this area. This is a detail which this house takes to a new level. It was designed with a very long cantilever which extends the roof and creates lots of shaded areas around the house.

One of the main goals for this project was to maximize the connection between the house and its surroundings in order to take advantage of the climate and the beautiful landscape. The house is perfectly positioned to enjoy a panoramic view of the ocean as well as of the Haleakalā volcano on Maui. Thanks to the cantilevered roof, the house can open to the outdoors and transition into the backyard and garden areas.

This unique house is located on the North coast of Hawaii, in Maui. It occupies a beautiful clifftop site which offers a really good view of the Pacific Ocean but also of the island’s beautiful landscape. These views were partially the inspiration for the house’s rather unusual design. This was done by studio Dekleva Gregorič Arhitekti. The house offers 450 square meters of living space which are organized into five distinct sections. Each has a different function but all of them enjoy a really great view of the ocean and they’re all connected together by the angular roof.

The largest of the five sections is used as a garage that’s big enough for two cars and as a workshop. A second volume acts as a home office for its owners and the other three sections house bedrooms with en-suite bathrooms. The social areas are placed in the spaces between these volumes. They form a big open-space area with easy access outside and with beautiful views just like all the other spaces.

You can also get a glimpse at the unique aesthetic linked to Hawaiian architecture by looking at structures such as the Kahua Kuili house. This is a residence designed and built by studio Walker Warner Architects and inspired by a classic Hawaiian summer camp. By referencing a local building style in this design the house looks very natural in this setting. It also enjoys magnificent views of the Pacific Ocean, Kua Bay and the Hualalai mountains which add tons of charm.

The first thing that stands out is the fact this is not a single building but rather a collection of several small cabin-like volumes spread across the site. There’s 8 individual pavilions all organized around a central courtyard. These provide a series of social areas to be used by the owners and their guests as well as some private spaces as well. There’s also a larger central structure where all the main spaces are. It has big barn-inspired doors that allow the breeze in from the east and west and open up these spaces towards the wonderful views.

This is a small house in Maui, Hawaii, a family home designed to be as sustainable as possible and to have minimal environmental impact. The project was done by studio LifeEdited and the team managed to turn this a completely self-sufficient home. The goal of creating an off-grid house that’s in perfect sync in its surroundings was successful and this was the result.

The house has a dark exterior which gives it a distinctive look but also suits its unique aesthetic. The design was optimized in order to be first of all sustainable but also highly resilient and beautiful. In other words, this is a house that can stand the test of time. The site on which it was built is quite remote and has a steep and challenging topography. It was the perfect setting for a house like this and the views were incredible. Inside, this two-story Hawaiian retreat has four bedrooms, two and a half bathrooms and a big social area which is a sort of indoor-outdoor space with really nice views, natural ventilation and a wonderful connection to the immediate surroundings.

Hale Nukumoi is a beautiful beach house in Kauai, Hawaii. It was designed and built here by Walker Warner Architects in collaboration with Stone Interiors and the overall impression is that of a stylish and casual retreat perfectly adapted to the area around it and for the mild climate of the island. It has an open plan with large sliding doors which allow the ground floor to be open and turn the house into a sort of pavilion. These doors can also be closed for privacy or when the house is not being used.

The proximity of the house to the public beach makes this a really great location but also raises certain privacy concerns. The design of the house was directly influenced by that. One of the defining elements is a copper mesh rain curtain which adds an extra layer of privacy to the home and also directs the rainwater from the roof down below. The ambiance inside the house is very relaxed, one of the most notable areas being the living room which has a big U-shaped sitting area with a super cozy aesthetic.

This lovely little house known as Kuono is hidden in Volcano, Hawaii, on a site surrounded by a beautiful forest very close to the nearby national park. You can rent it via Aibnb. Its defining feature is the contemporary and minimalistic design. It has a very clean aesthetic and floor-to-ceiling windows which bring in lots of natural sunlight while at the same time ensuring a close connection between the cozy indoor spaces and the outdoors.

Wood is the main material used for both the exterior and interior of the house in different forms. The entrance is marked by a vivid orange door, being the only opening on the front of the house. The space inside is filled with essentials such as a kitchenette, a bathroom with a glass-enclosed shower and a main open space which is a combination between a living room and a bedroom. The decor is modern simple, with soothing and simple colors that create a very welcoming atmosphere.