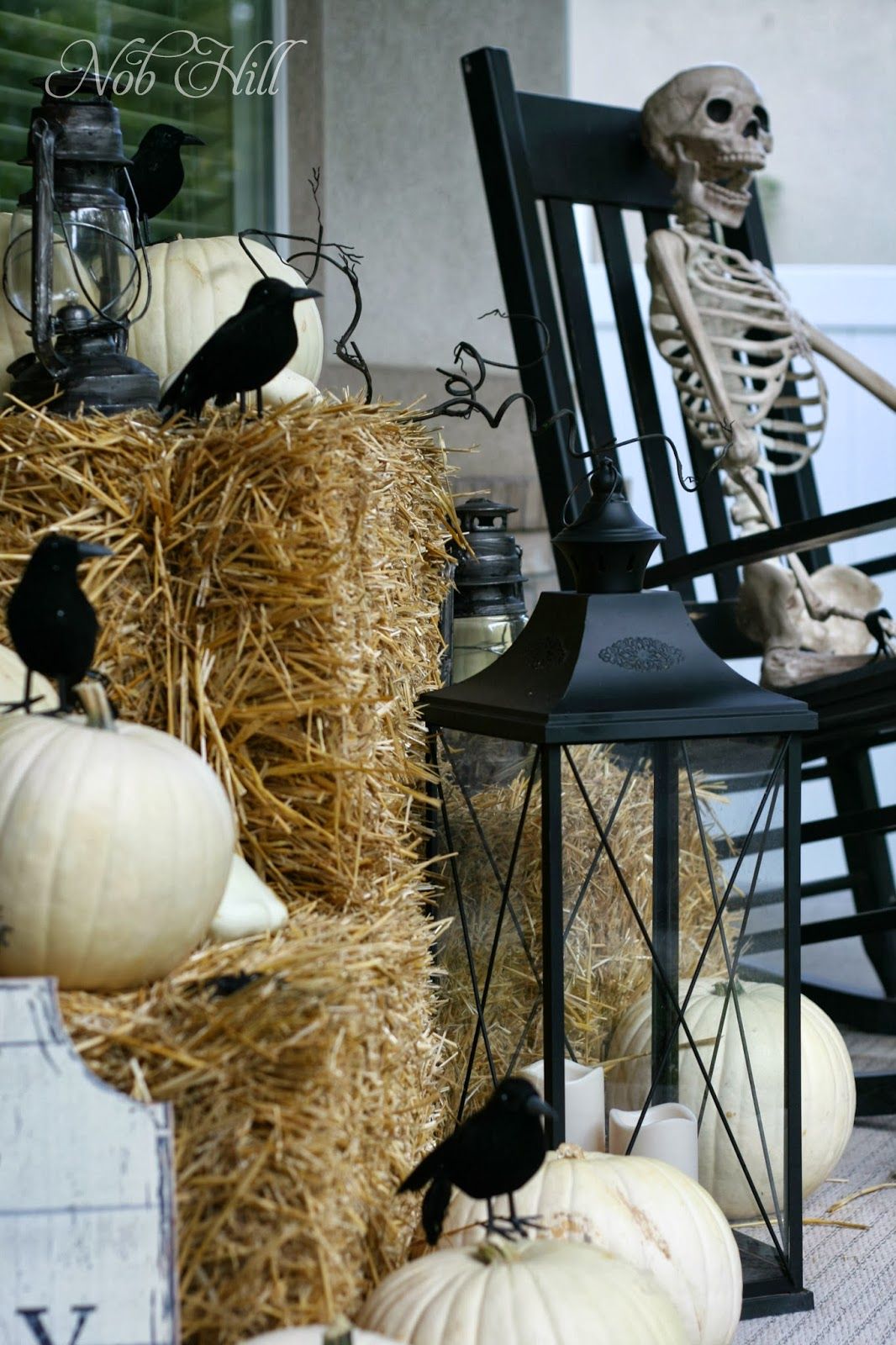 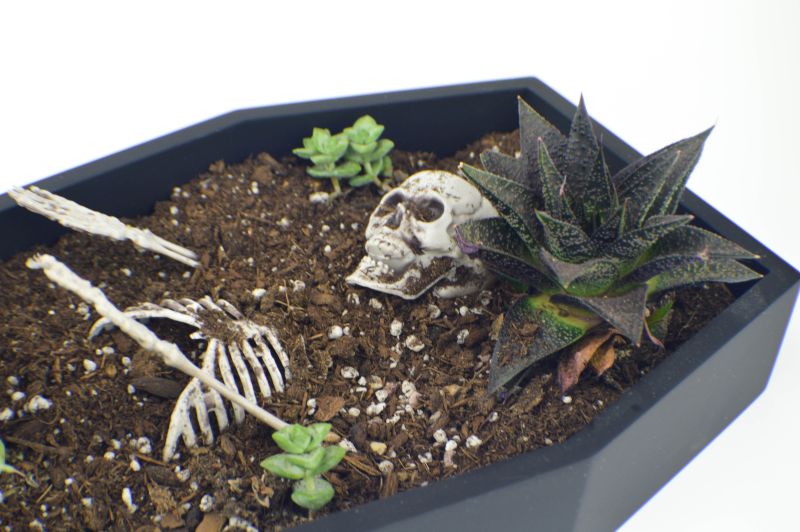 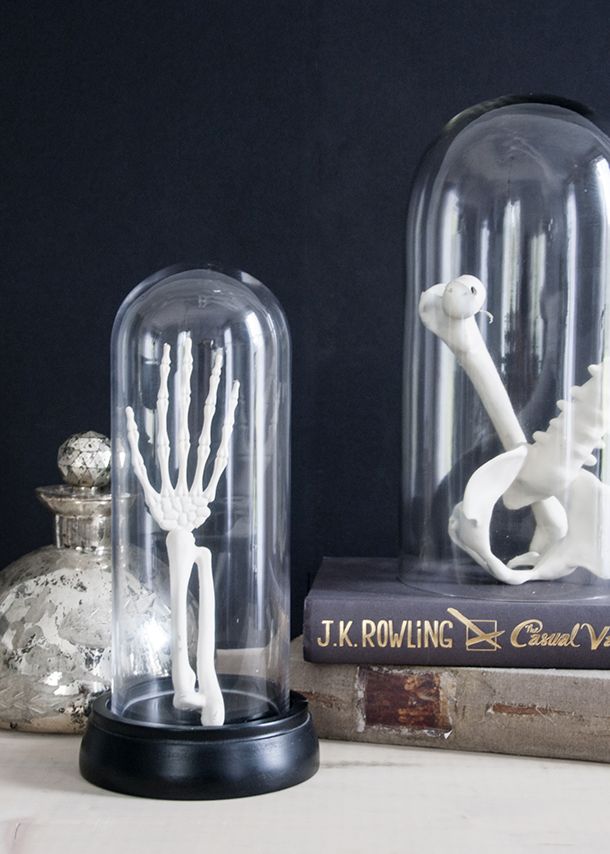 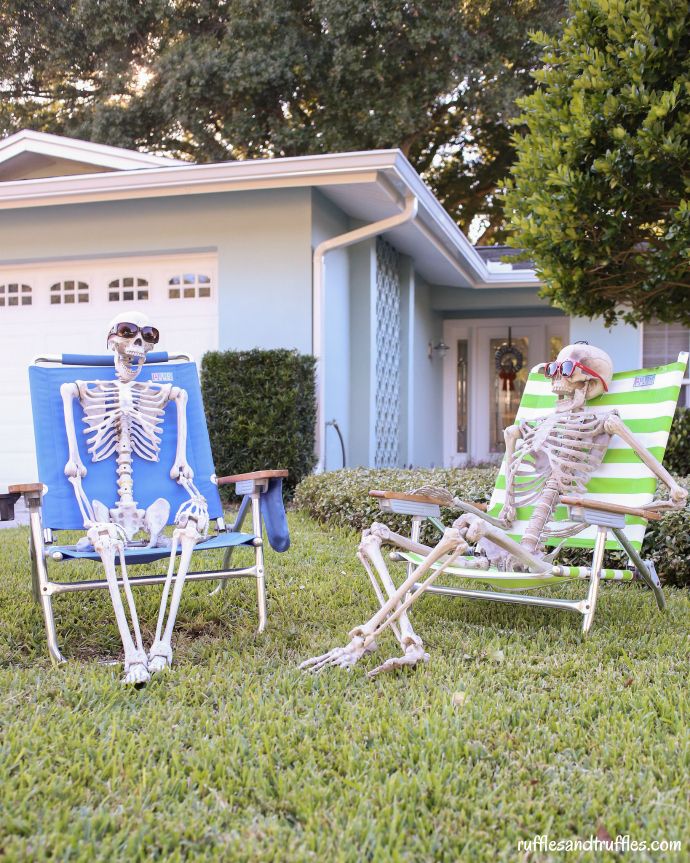 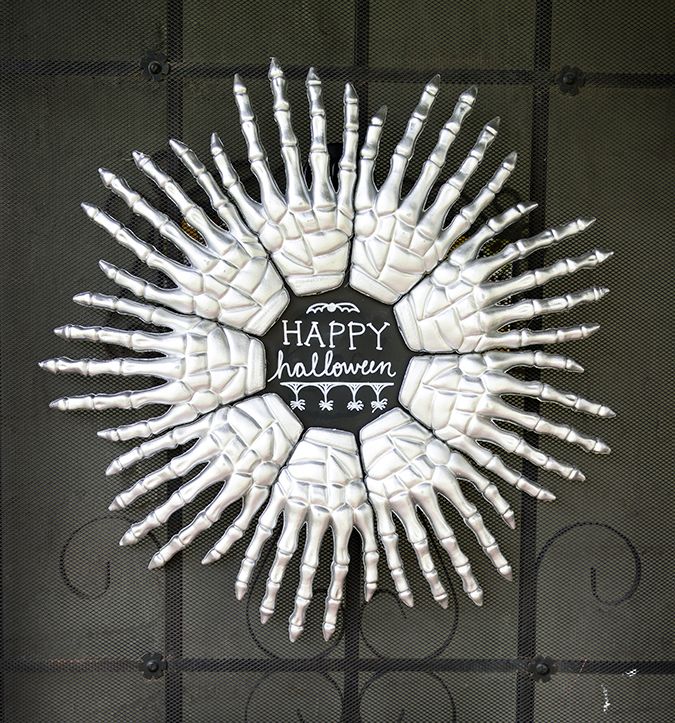 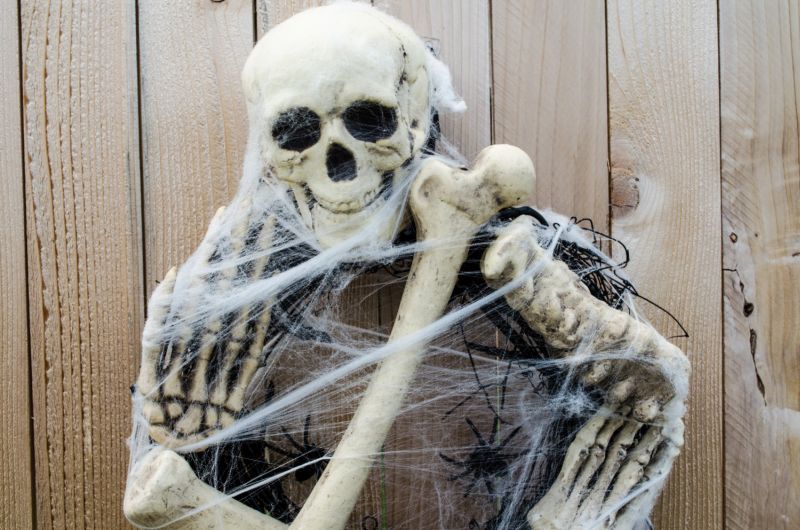 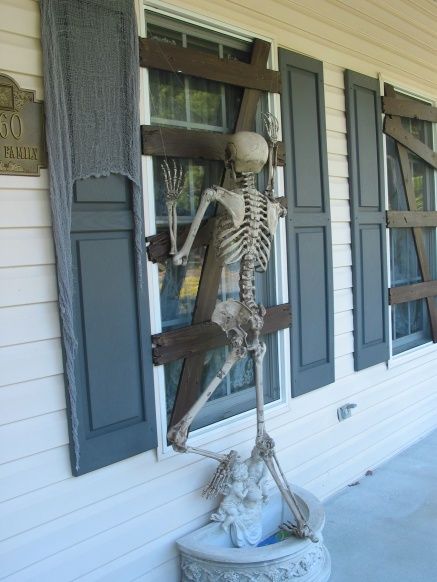 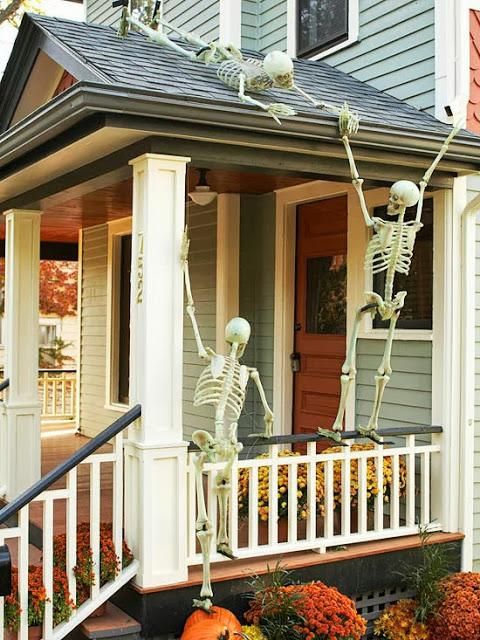 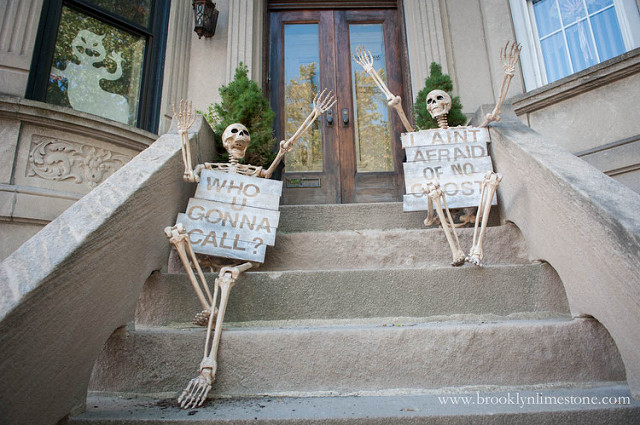 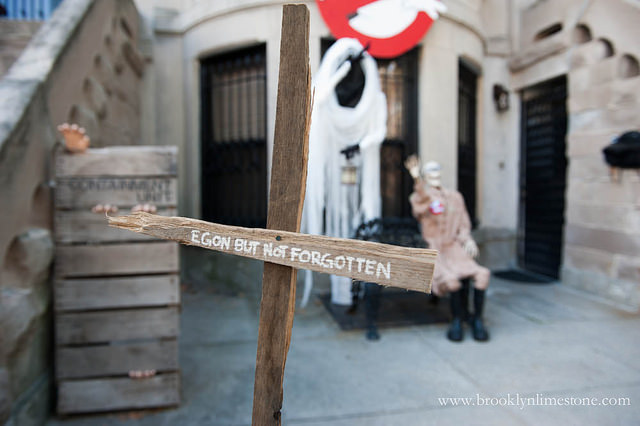 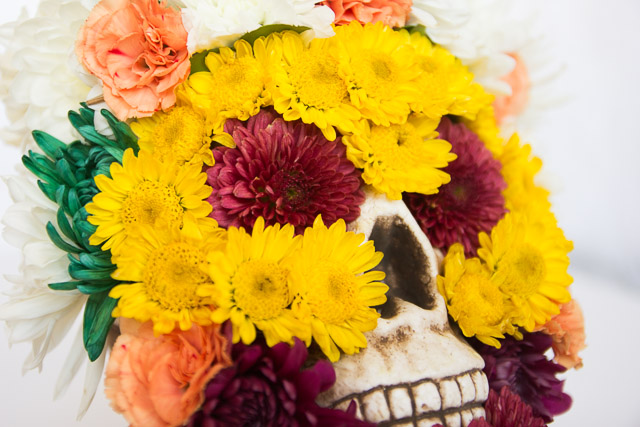 What spooky decorations have you prepared for this year’s Halloween? We’ll keep things simple and classical, centered around skeletons. They’re a great symbol of everything that makes us shiver and you can’t really go wrong with a skeleton-themed décor especially if you add a few other things to the mix to really evoke that grotesque and creepy ambiance that follows them everywhere. Get ready to turn your cozy home into a haunted house overrun by the dead and the forsaken.

There’s no need to look very far for inspiration when decorating with skeletons and other spooky Halloween silhouettes. A skeleton casually resting in a rocking chair with his dead best friend the dog at his feet is sure to make the right impression. Apart from that you could decorate your front porch with a bunch of pumpkins and some crows randomly spread around. {found on nobhilldesign}.

A skeleton in a coffin is actually not that spooky. However, that’s when the coffin is tightly sealed and six feet under, not exposed with skeleton parts showing through. But that’s what makes this planter special. It’s shaped like a coffin and it’s perfect for Halloween. It might be a little difficult to find a planter like this so maybe you’re better off crafting it yourself. You can find a tutorial for that on Revamperate.

Most people display flowers and other cute things under these glass domes but Halloween is a special time when everything transforms from cute to creepy. So get rid of those delicate flowers and replace them with skeleton hands and other body parts. You can just take apart a plastic skeleton and spray paint it ivory to give it a more authentic look. The idea comes from Earnesthomeco.

Create a casual everyday scene on front lawn but with a spooky twist. Put out your comfortable lounge chairs and have a couple of Halloween skeletons rest on them. Place them in a casual and comfortable position and don’t forget the sunglasses. They’ll scare off your neighbors and everyone passing by and they’ll surely turn a few heads. {found on helpfullhomemade}.

Or perhaps you’d like to put the skeletons to work. Display them in working positions and made it look like they’re trimming the bushes, mowing the lawn or taking our the trash. They’ll look right at home and this make them that much more terrifying. Figure out how many skeletons you’ll need for the scene you want to create. You could also dress them with some of your old clothes for a more authentic look. {found on helpfullhomemade}.

If you’re feeling particularly cruel, perhaps you’d like to take apart your Halloween skeleton and use the parts to make a wreath. You can find a few hints on how to arrange the body parts on Readysetcraft. You’ll only need the head, hands, spine and a few bones but you could use all the pieces if you really want to. Glue them together to make a wreath form.

Speaking of wreaths, we found one made only of skeleton hands. That means you’ll have to go around dismantling a bunch of skeletons and taking their hands or to go buy a few pairs of skeleton hands from the store. The first option sounds more fun so we’ll choose that. In addition to those you’ll also need some metallic silver spray paint, a chalkboard circle, some strong glue and a chalk marker. The result will be similar to the design featured on Triedandtrueblog.

In case you don’t have time to make the spooky wreath yourself, you could order a ready-made one. There’s this really creepy-looking one we found on Etsy. it’s made of styrofoam bones covered in spiders and spider web and it looks like it’s been in the attic for a really long time. that’s actually the look you want for Halloween.

Want to give your neighbors a good scare? Go get yourself a Halloween skeleton and place it in front of your window or make it look as if it’s climbing your house and trying to break in. You can cover it with some old clothes or leave it as such. To make things look more authentic you can put up some wood planks to make it look as if you’re trying to keep out the undead.

There are a bunch of other ideas regarding the scenes you can create with skeletons this Halloween. Perhaps you’d like to let them throw a party. Display them in funny ways and make it look like they’re having the time of their lives which would be pretty funny actually since they’re already dead. Or maybe you could make it look as if skeletons have taken over your lawn and house.

In case you want something a bit less obvious, something that strikes from the shadows so to say, check out the idea on Sweetsomethingdesign. Go find yourself a Halloween skeleton and take it out in the yard or in the garden. Bury it among your plants and leave out the hands, legs and the head. You can even put up a tombstone to make the scene complete.

Can you imagine something scarier than ghosts or skeletons dressed as ghost busters? They really make you give up any hope that someone can get rid of these things so unless the Winchesters are close by you’re on your own. In any case, to pull off such a décor you need skeletons and costumes. You could also add a sign if you want. {found on brooklynlimestone}.

If you want to make something that’s pretty and terrifying at the same time then you should consider these Day of the Dead flower skulls. We found these on Prettyprudent and they’re pretty eye-catching. We’re not sure whether we find them pretty or intimidating. In any case, if you want to make something similar you’ll need a skeleton head and a bunch of brightly-colored flowers.

We also found something similar on Sugarandcharm. It’s a skull centerpiece and to make something like this you need a styrofoam skeleton head, succulents, duct tape, a knife, some soil and moss. Cut a hole in the top of the skull and use that to cover up the hole at the bottom. Use tape to seal off the bottom so you can put soil inside the skull. Then add the moss and the succulents. You can also draw on the skull with sharpies.