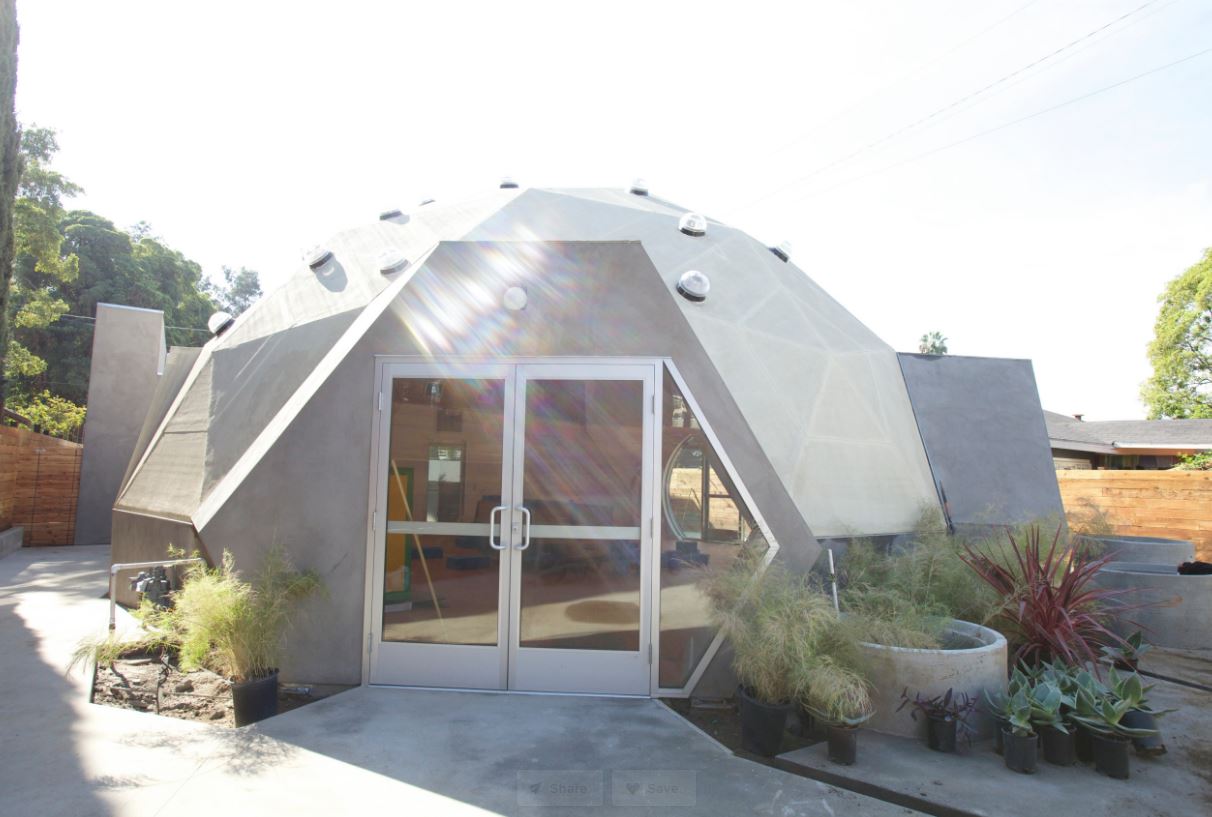 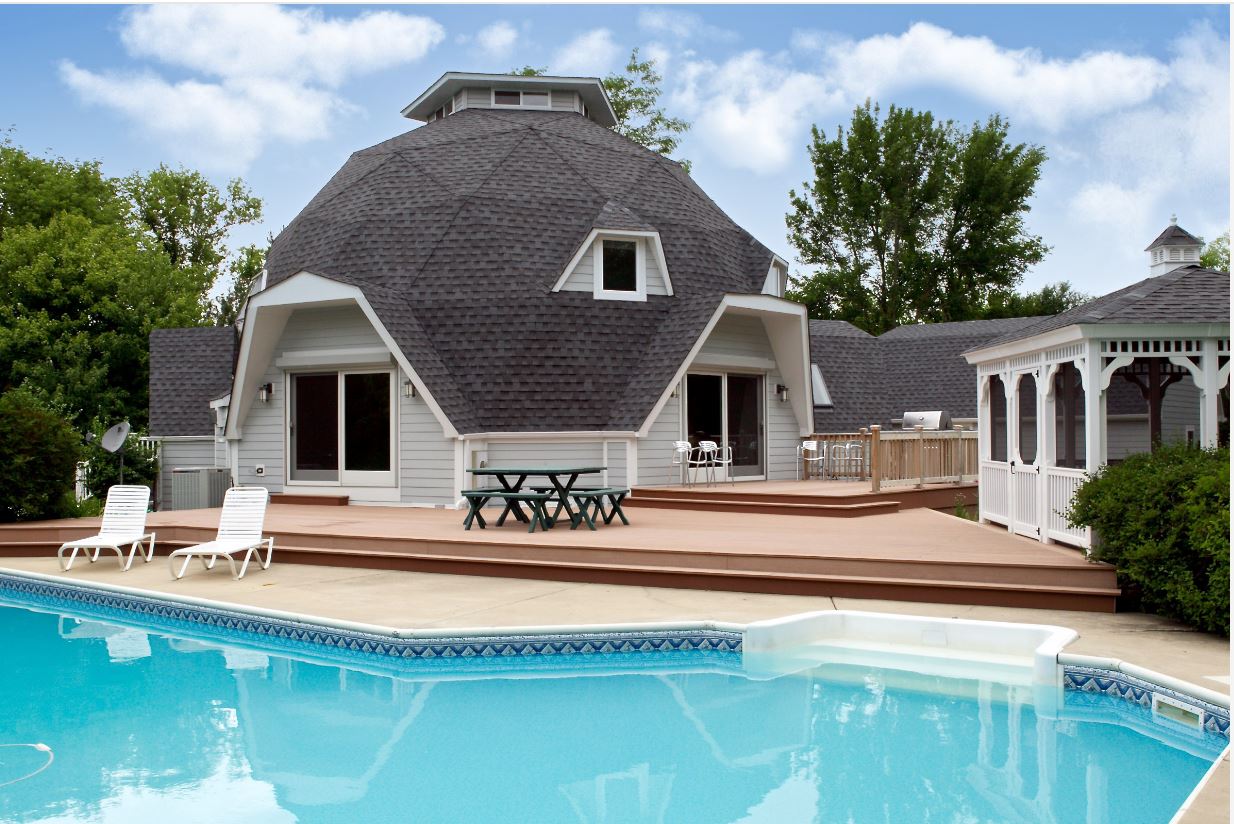 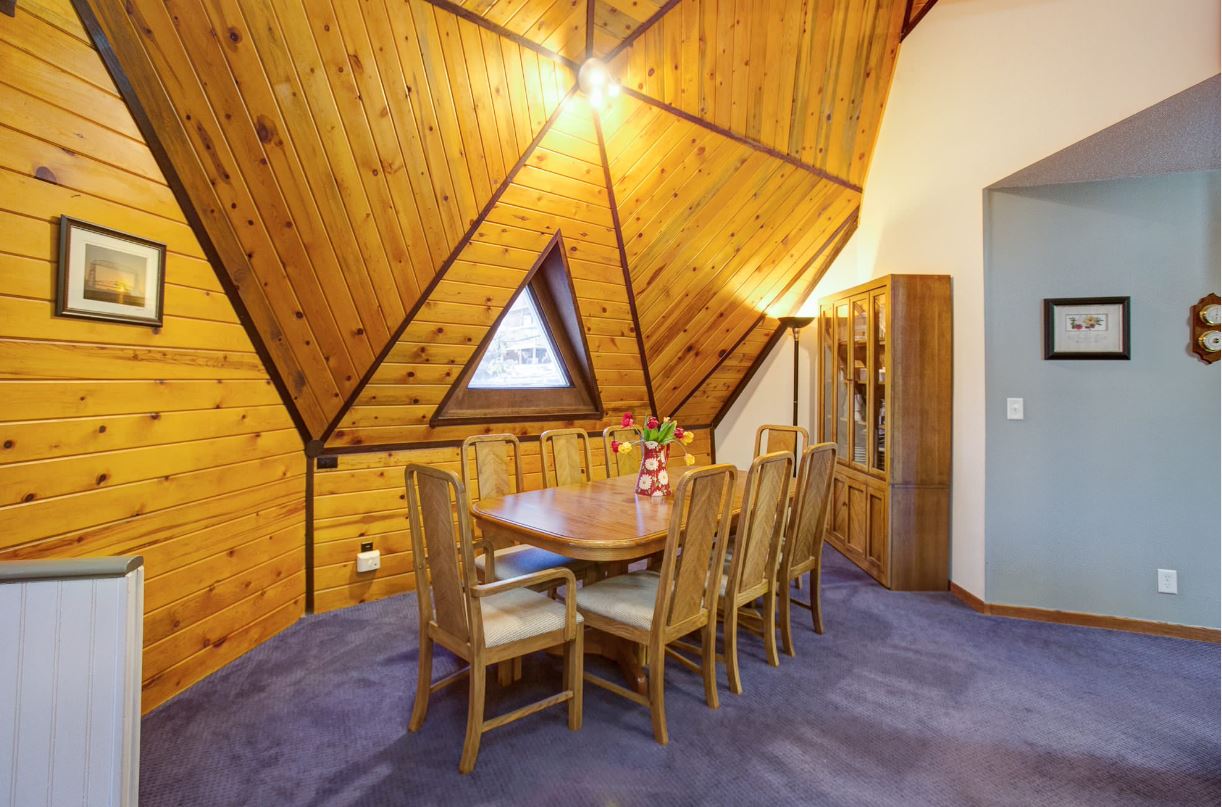 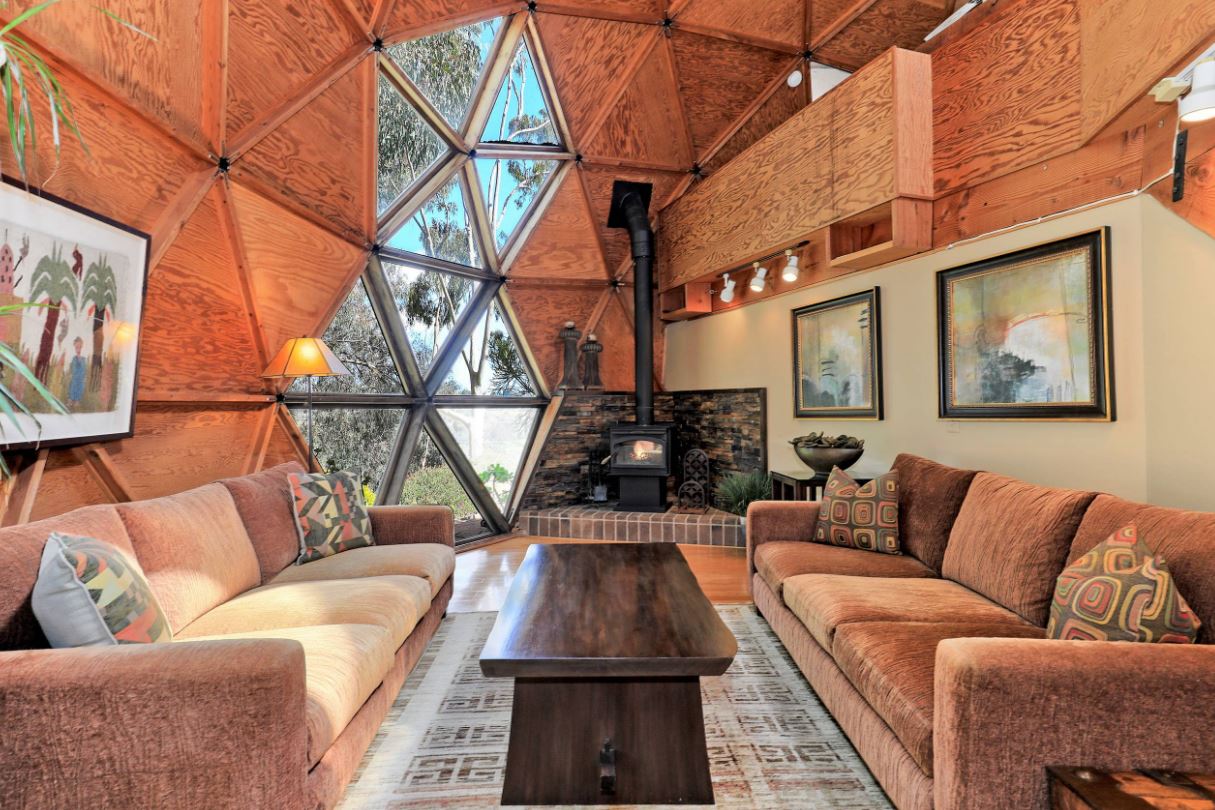 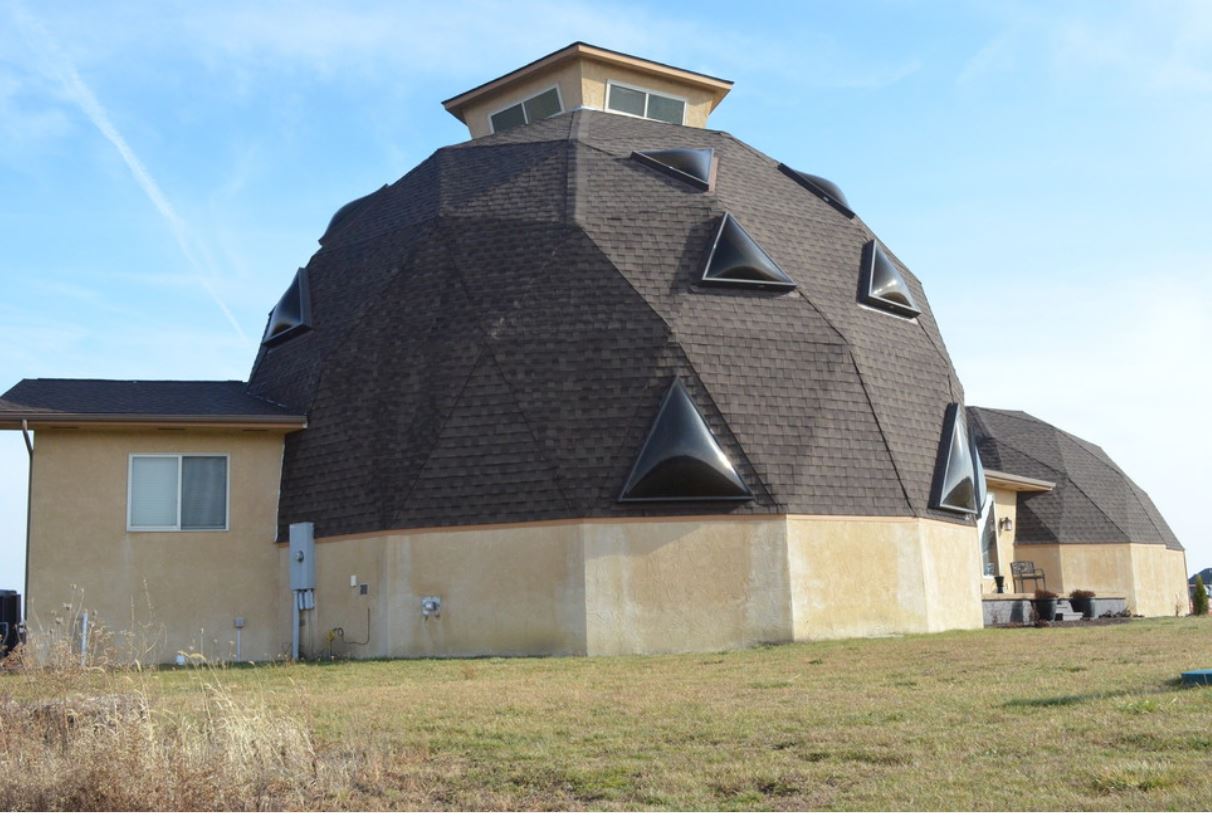 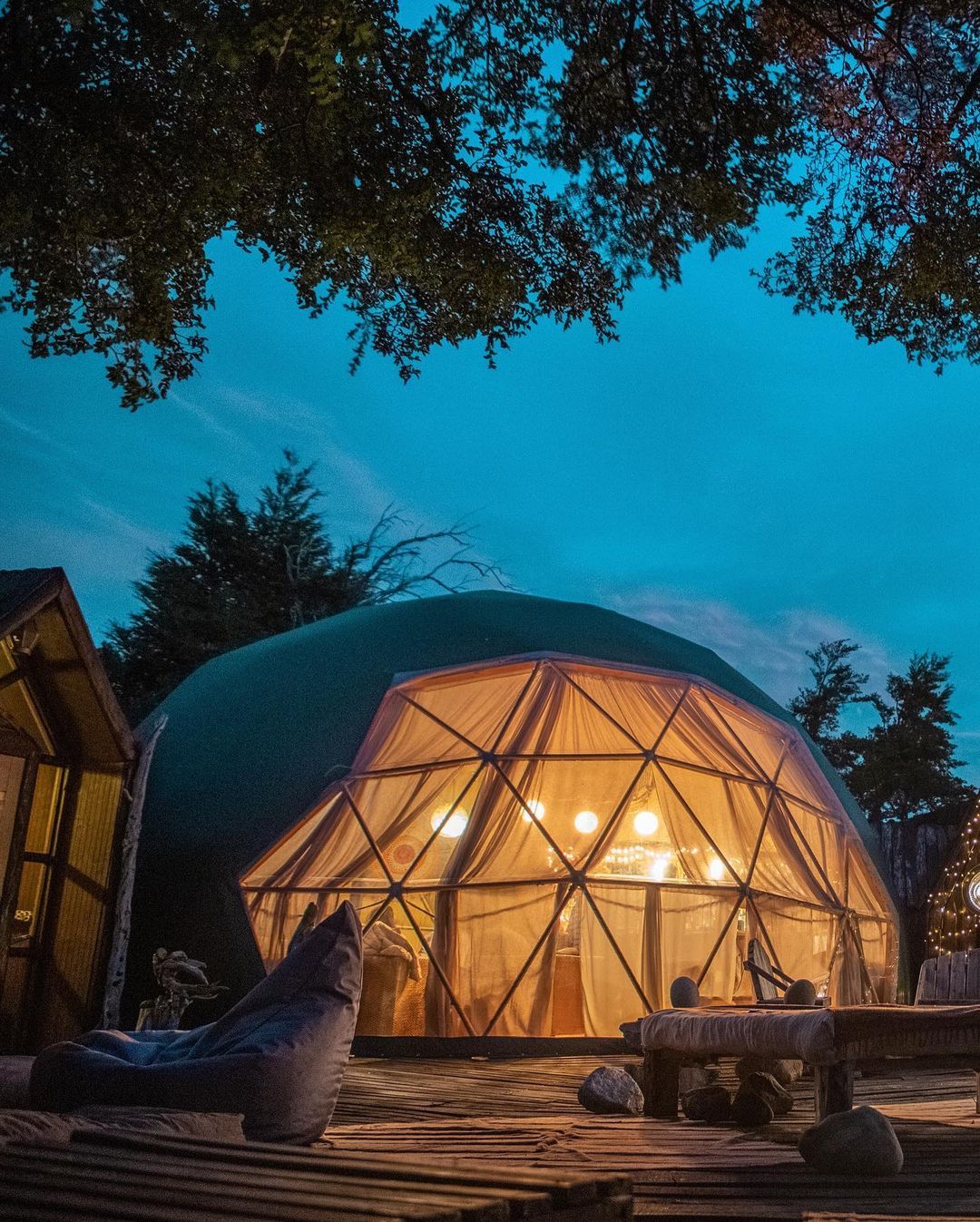 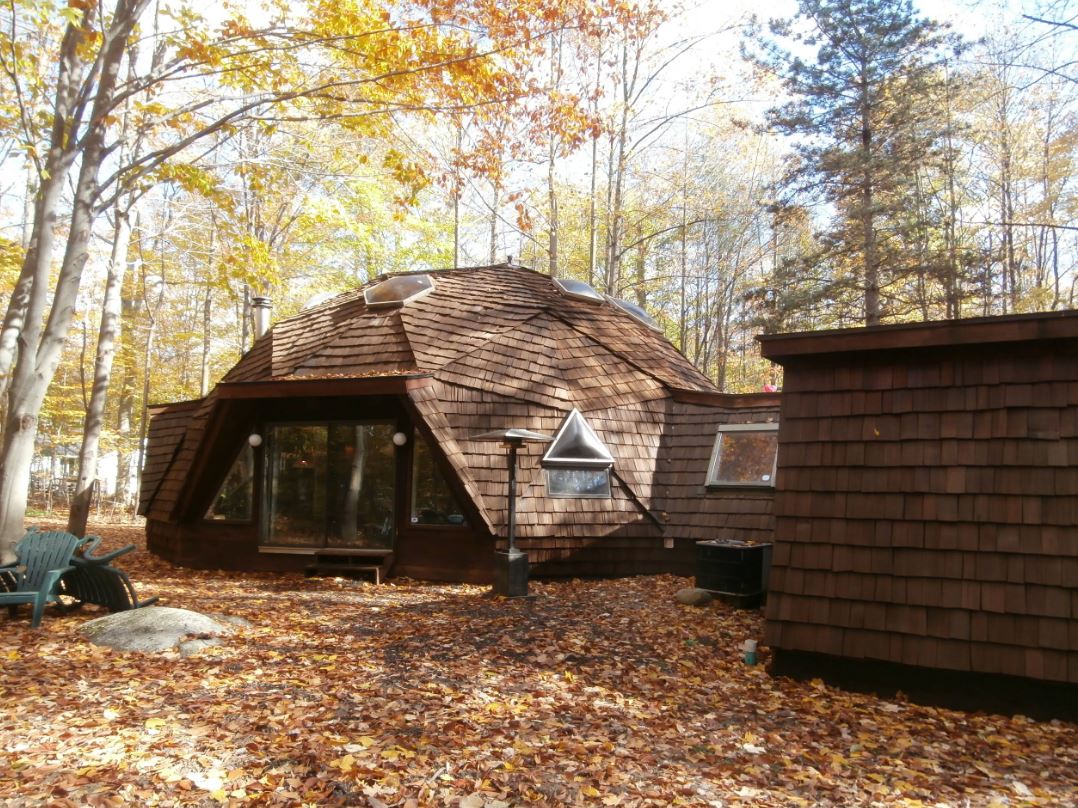 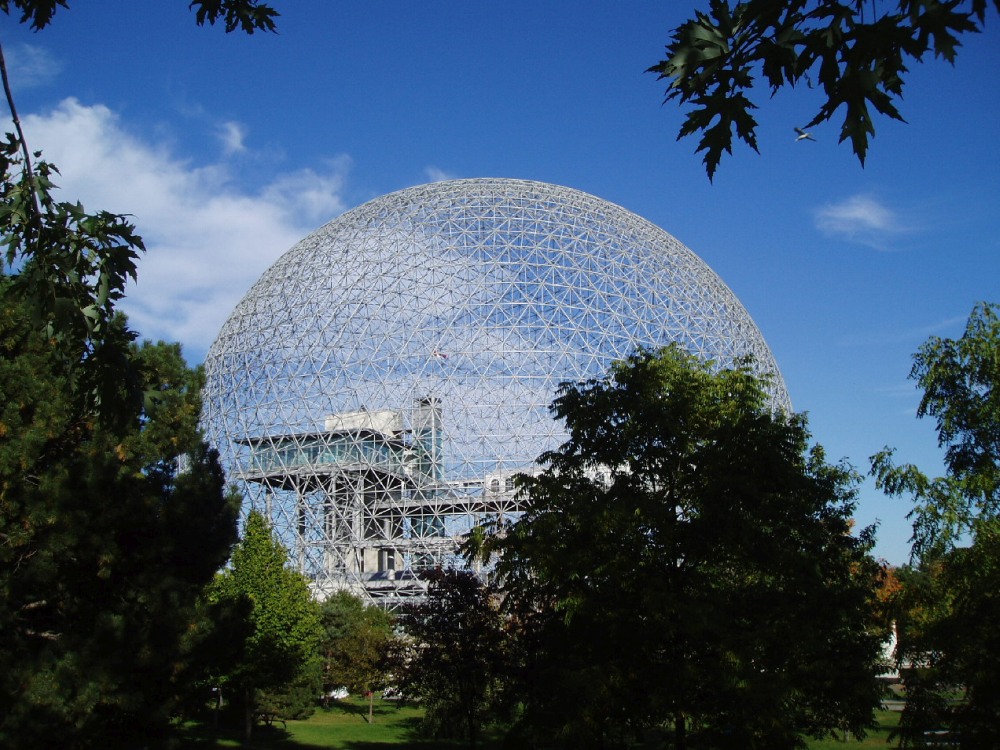 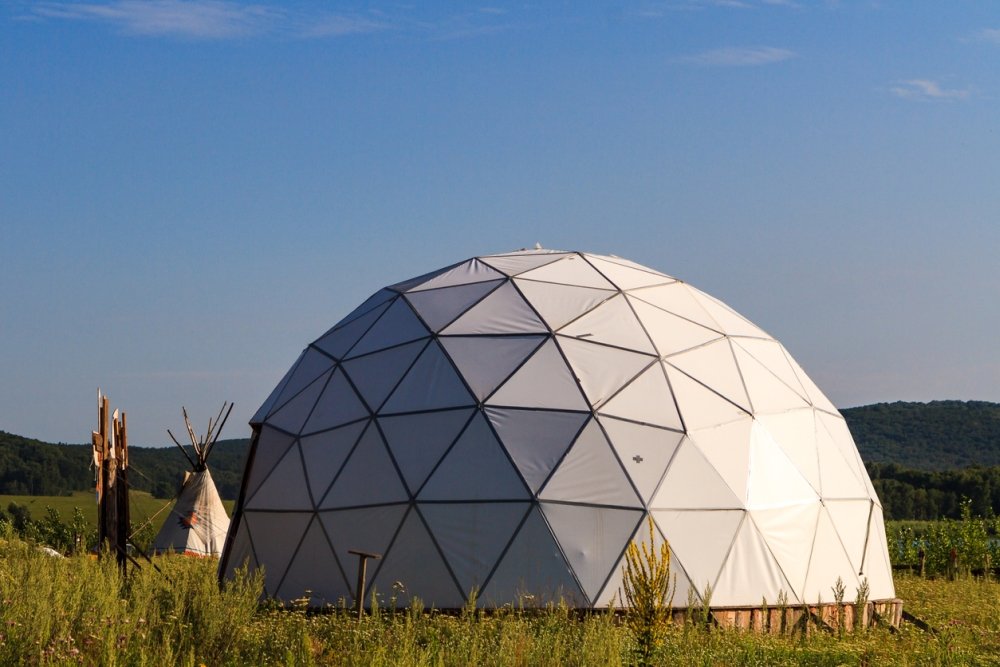 The geodesic dome home could be the future of residential homes. Although there was a time when many people believed this, their popularity waned. Dome homes were ahead of their time when they first emerged, which also turned many people off.

However, geodesic domes didn’t disappear and it seems today they’re making a comeback. Many believe they could be the future of housing, again.

History Of The Geodesic Dome Home

The architectural design identified with the counterculture of the 60s and 70s. The futuristic home became popular after the inventor, architect, engineer, and mathematician Buckminster Fuller, lectured worldwide on the structure.

It was believed the dome design was the product of American ingenuity, but it wasn’t. Today, many still ask, did Buckminster Fuller invent the geodesic dome? And the answer is, no, he didn’t.

In 1926, the first geodesic dome was designed by Walther Bauersfeld, in Jena, Germany. The original dome is no longer standing. In 1953, a second dome was built in Woods Hole, Massachusetts, where it stands to this day.

Comprehensive anticipatory design science is the study of interrelatedness, trends, and principles. Science involves the study of key information necessary to build upon today’s needs without compromising the needs of the environment for future generations.

The term comprehensive anticipatory design science was coined by Buckminster Fuller in the early 60s. Included in the study of the new science was the geo-dome.

It’s here where the confusion comes from with regard to who invented the dome. And although Fuller didn’t invent the dome home, he’s the one who sold it to America.

What Fuller discovered was with geodesic dome living, humans would have a lower carbon footprint. As the dome homes required fewer building materials and took up the least surface area, in the long term, the homes would reduce the amount of destruction left behind by home building.

Ecocamp Patagonia Chile’s Torres del Paine National Park is a sustainable travel destination and a tribute to the geo-dome.

Tucked into the landscape of the Andes mountain range, the ecocamp is what Fuller envisioned for the future of mankind. The camp doesn’t emit greenhouse gases. The units aren’t bad for the air. Indoor cooling and heat do not impact the local environment.

The entire area features geodesic domes where visitors can experience what it’s like to live in their own dome.

What Is A Geodesic Dome Home?

The dome is a hemispherical structure based on a polyhedron design. The homes are made with triangle pieces to create a nearly-spherical shape.

Geodesic domes are making a comeback. After all, they make the perfect home for solar panels as you can place the panels at any angle.

Some are obsessed with geodesic domes. Are they better than standard homes? Although they require less building materials and offer unparalleled strength.

Whether you believe in conserving energy or not, it’s something we need to consider. Doing so helps the economy, the planet, and our pockets. Who doesn’t want a lower energy bill each month? No one can say no to that.

Because of their shape, geodesic domes have more efficient air circulation and keep temperatures even throughout the structure. This is because round structures don’t have as many pockets or corners as other structures.

This might have been the thing Buckminster Fuller liked most about the spherical structure dome design. The surface area of a home is less on the exterior than other homes. So you will pay about 30 percent less for the same square footage than you would a square or rectangle home. This saves a significant amount of money.

You can build your home for far less if you do it right because you aren’t wasting money on space that you won’t use.

Buckminster Fuller is the face of American ingenuity, and the geo-domes may as well be his invention. Those who do have their own dome were inspired by the American systems theorist.

Most people, even contractors, have no idea where to start when building one. If you have the opportunity to build your own dome and can afford it, there’s no reason you shouldn’t.

Geodesic homes have a lot of room to design them in a unique way. Their spherical form looks modern, retro, or rustic. You can leave them open-concept or divide them up. Just because they’re rare, doesn’t mean their spherical structure is designed only one way. Buckminster Fuller championed variety, and he wanted the styles to evolve.

You can find amazing inspirational homes online by searching for geo-designs using your own design style. The homes are popular as contemporary designs with geometric shapes.

You can literally put only windows instead of walls in the homes if you wanted. Because there are many small pieces, you can exchange  them for windows. Even create unique window shapes.

Doing so will do little to make your home less safe, especially if you use strong windows.

This is one of the first nearly earthquake-proof home designs. Tests have proven this to be true and so have real stories of geodesic domes being the only ones standing after an intense earthquake. This is amazing news.

This also means that they are resistant to other natural disasters. You can build one to withstand almost anything and work as a community storm shelter.

Geo-camping, formerly known as glamping, involves accommodation and facilities more luxurious than those associated with traditional camping. Imagine a tent in the form of a geodesic dome structure.

Buckminster Fuller knew the geodesic domes weren’t perfect, but only because they weren’t at the forefront of building importance. There are things that need to be addressed and resolved before they officially become a trend.

Although the homes have less materials than a tiny home, geodesic homes are not DIY projects. The homes require professional skills to build.

However, dome kits are available that make the process easier. Unfortunately, not something one could do if the only thing they’ve built is a makeshift bicycle storage rack.

Although the surface area is lower, unless you do it right, you could waste a lot of materials on the wrong cuts. It’s important to plan out every cut beforehand because you cut the wrong angle and you’ll waste half your materials.

So measuring twice, cutting once is even more important now. Each triangle needs to be perfect or they won’t all fit together.

Although add-ons are possible, they kind of defeat the purpose of a geodesic home. Adding chimneys, square rooms, and other things can take away all of the pros and benefits of geodesic domes.

You can add on to the homes by adding other round domes. This will make your home look more like a community itself than a single-family home, but works for multi-family homes.

Geodesic kits start at $50,000. This seems like a steal until you realize you’ll need help building it. Most companies will charge $80 per square foot if you do it yourself and up to $200 per square foot for them to build it.

Since the average price to build a house is between $100 and $150, you can assume that you’ll pay more for this home than a normal house.

There are three things to consider that can impact the price of your geodesic home.

Basements and lower levels add a lot to the cost. But this is if you pour concrete for them or if you want them finished. If you want to install lighting, water, waterproof, insulation, and more, then it will cost more.

Kitchens are the biggest cost when it comes to interiors. Living room furniture can be expensive but it’s nothing compared to the necessities of a kitchen. The range here is so great that you have to be specific to get a good quote.

Find out more about kitchen prices and average home cost here where we break down the cost of each room and each item.

Do you want four appliances or a half-bath? If you’re off-the-grid, you may not want an indoor bathroom at all, or at least not want indoor plumbing.

You’ll need to use the least surface area available. Also, what kind of building materials will you need. Put yourself on a scale for each room to get a more accurate quote from contractors who are willing to help.

Some people confuse geo-homes with monolithic dome homes. Monolithic homes differ as they are one solid structure and come in one piece, made from concrete. If you wanted a larger dome, you would  need to special order it.

They require expert help to build as the concrete needs to be applied in layers. There is no room for mistakes as everything must be assembled according to their exact measurements. If you like the geo-look and prefer concrete, then this is your next home.

It starts with a round concrete foundation. Then, an inflatable membrane is placed on it. This works to build a mold made out of polyurethane which is sprayed onto it. Then, rebar is placed to create a round frame.

This rebar has electric wiring and plumbing added before the concrete layers are added to it. And finally, paint your interior walls.

How Long Do Geodesic Domes Last?

The latest models, made with carbon neutral bioceramic materials are expected to last 500 years. The homes do not rot, burn or rust, and require the least amount of maintenance ever for a home.

The form is one of the strongest in the world, as the spherical structure is engineered to withstand the largest volume of snow ever recorded – 40 feet. The standard insulation cavity in the dome is 10 feet which enables very high R-values.

What Is The Difference Between A 2V And 3V Geodesic Dome?

A 3V dome is comprised of three triangle sizes and is more complex in its pattern than 1V and 2V domes. 3V domes also have a greater number of triangles than the simpler models.

An original model of Buckminster Fuller’s Geodesic Dome House, intended to stand at 80 feet in diameter, from 1952, is on display at the Museum of Modern Art in New York.

The domes are used for military radar systems, churches, auditoriums, and for special events in which temporary, and strong shelters are needed.

Why Do We Need Geodesic Dome?

As Buckminster Fuller saw it, it’s not why but why not? Geodesic shelters have been built worldwide in different climates and temperatures. They have proven to be the most efficient human shelter ever. More specifically, the dome is energy efficient.

The future is bright for geo-homes. With the latest in advanced technology, homes are more attractive to home buyers, and they’re also more accessible.

When dome homes were first introduced to the American public, they were too expensive. Today, and with the tiny house boom still underway, this time, dome homes really are poised to be the future of the modern home.

Buckminster Fuller would be proud if he were alive today. But the dome home is just getting warmed up. There’s much more that needs to happen, but it seems the path is underway.