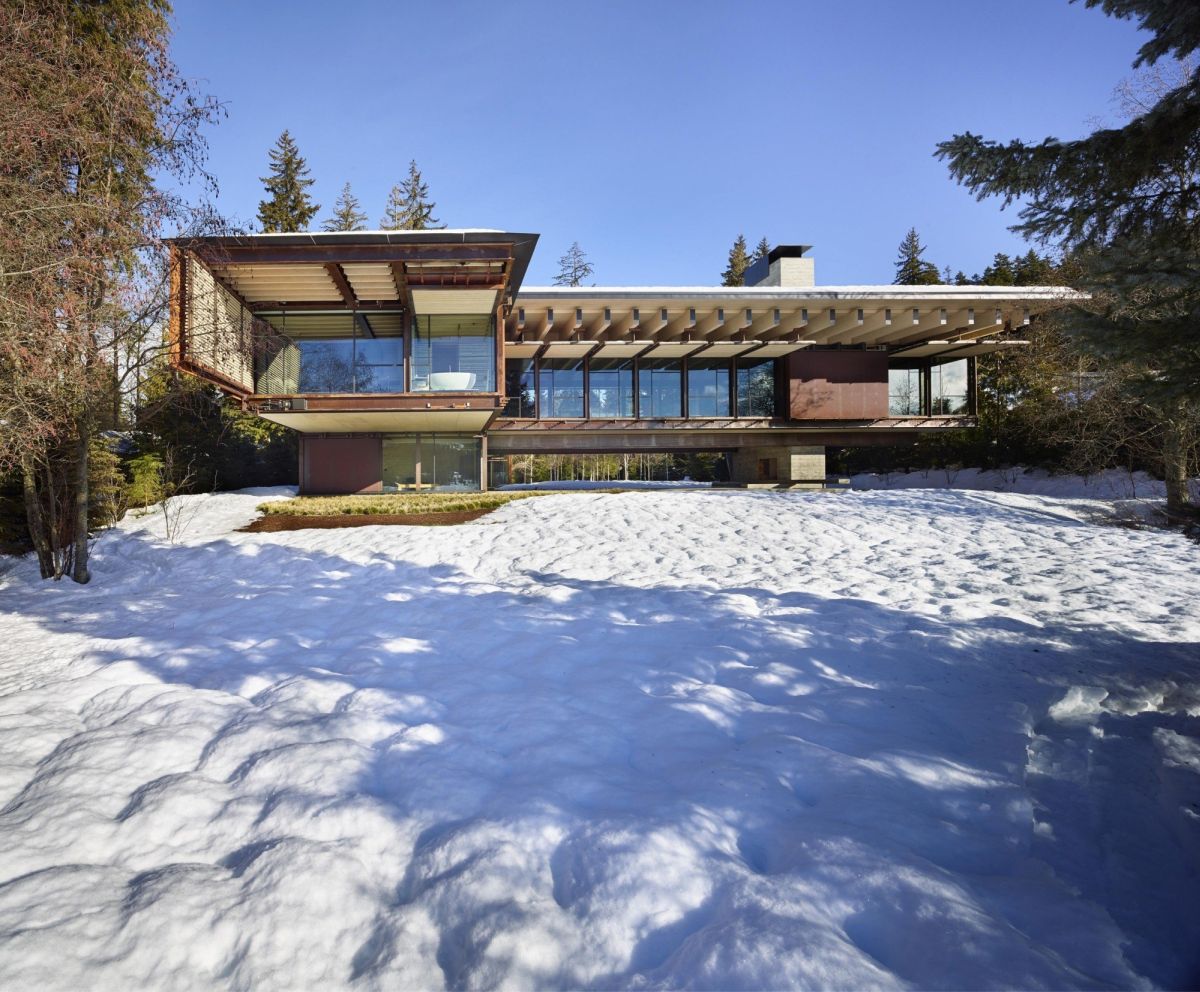 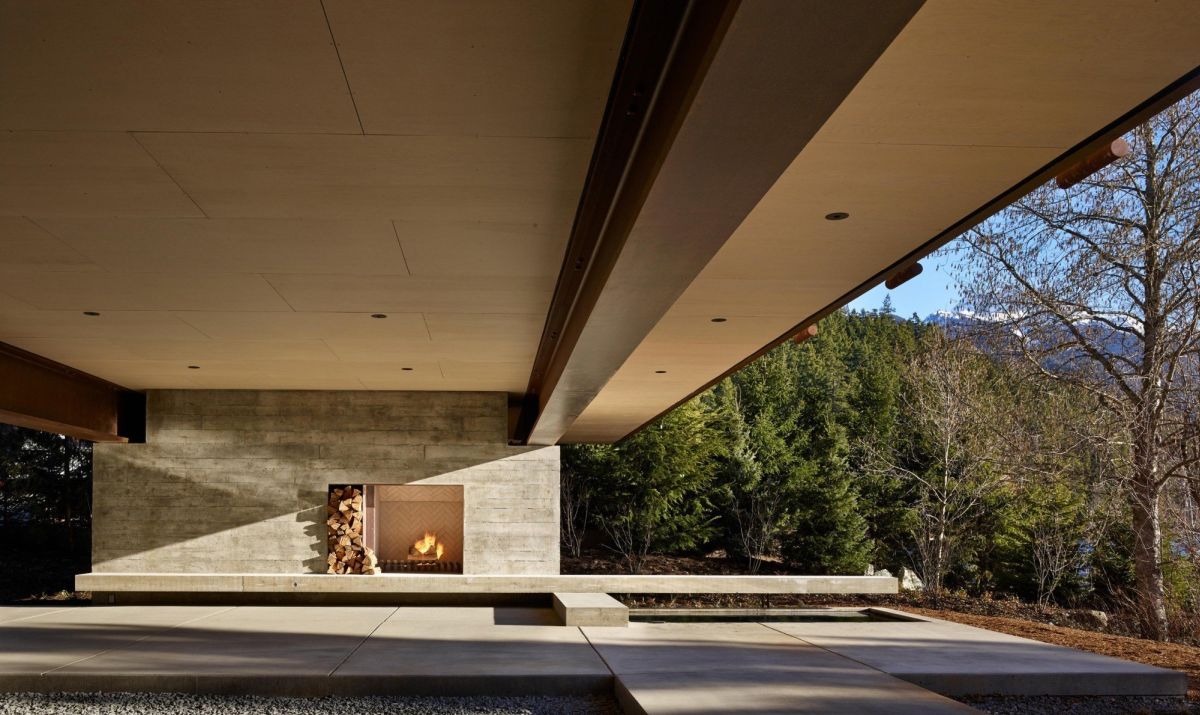 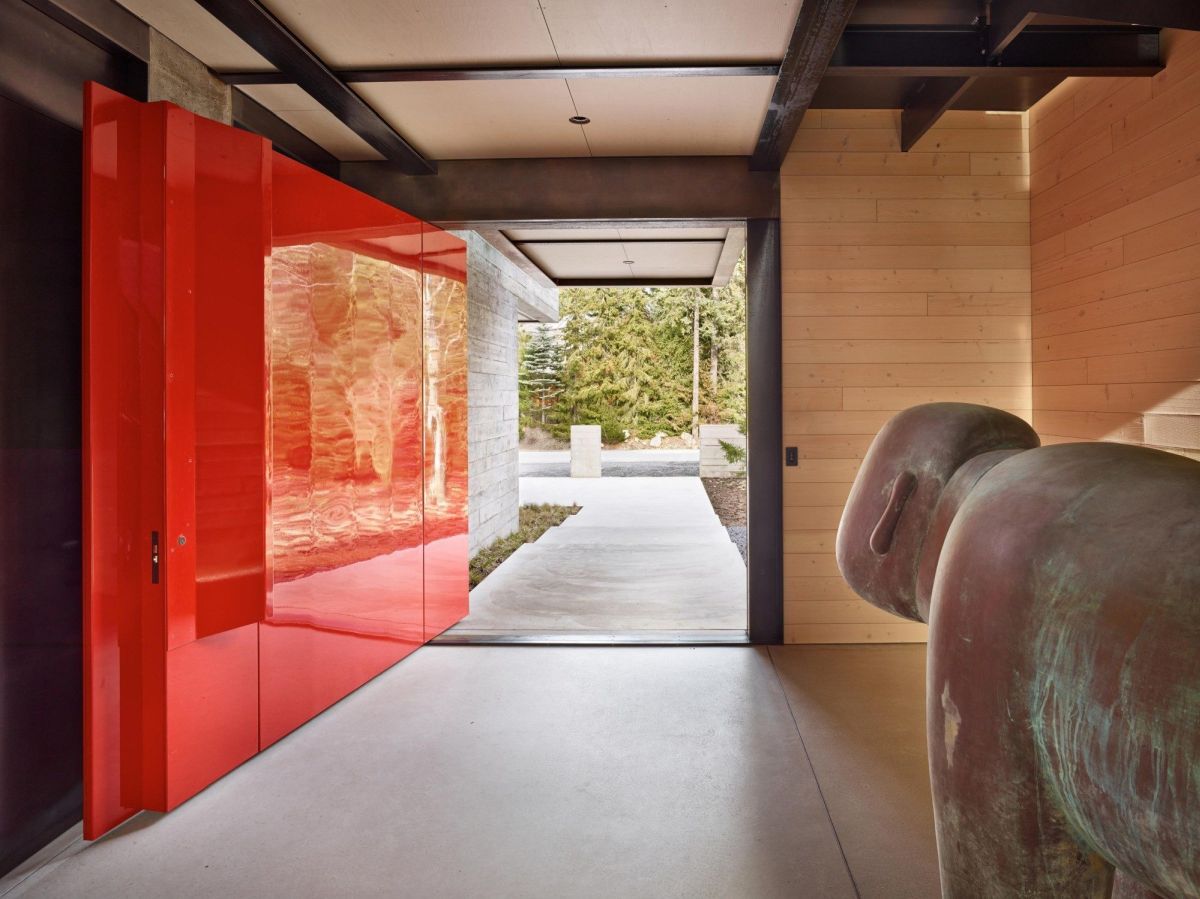 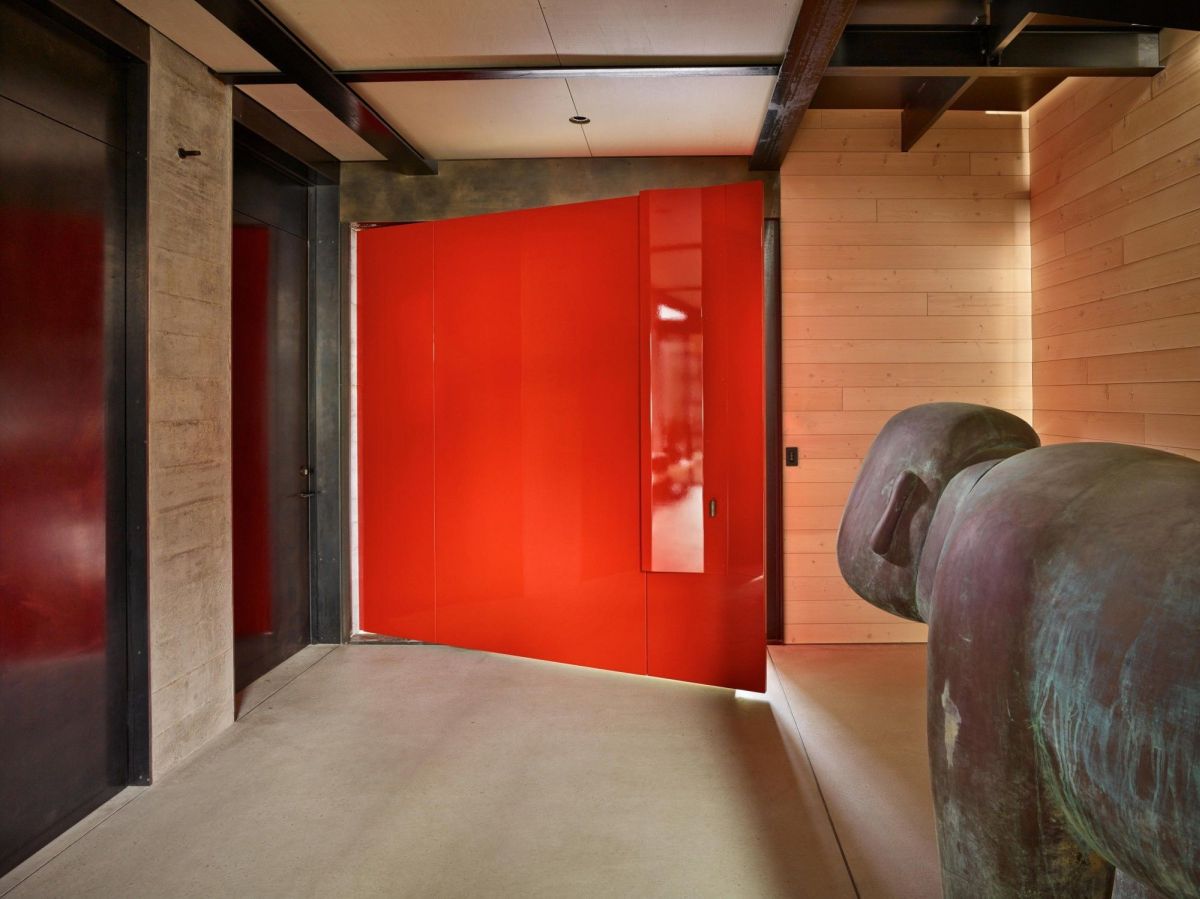 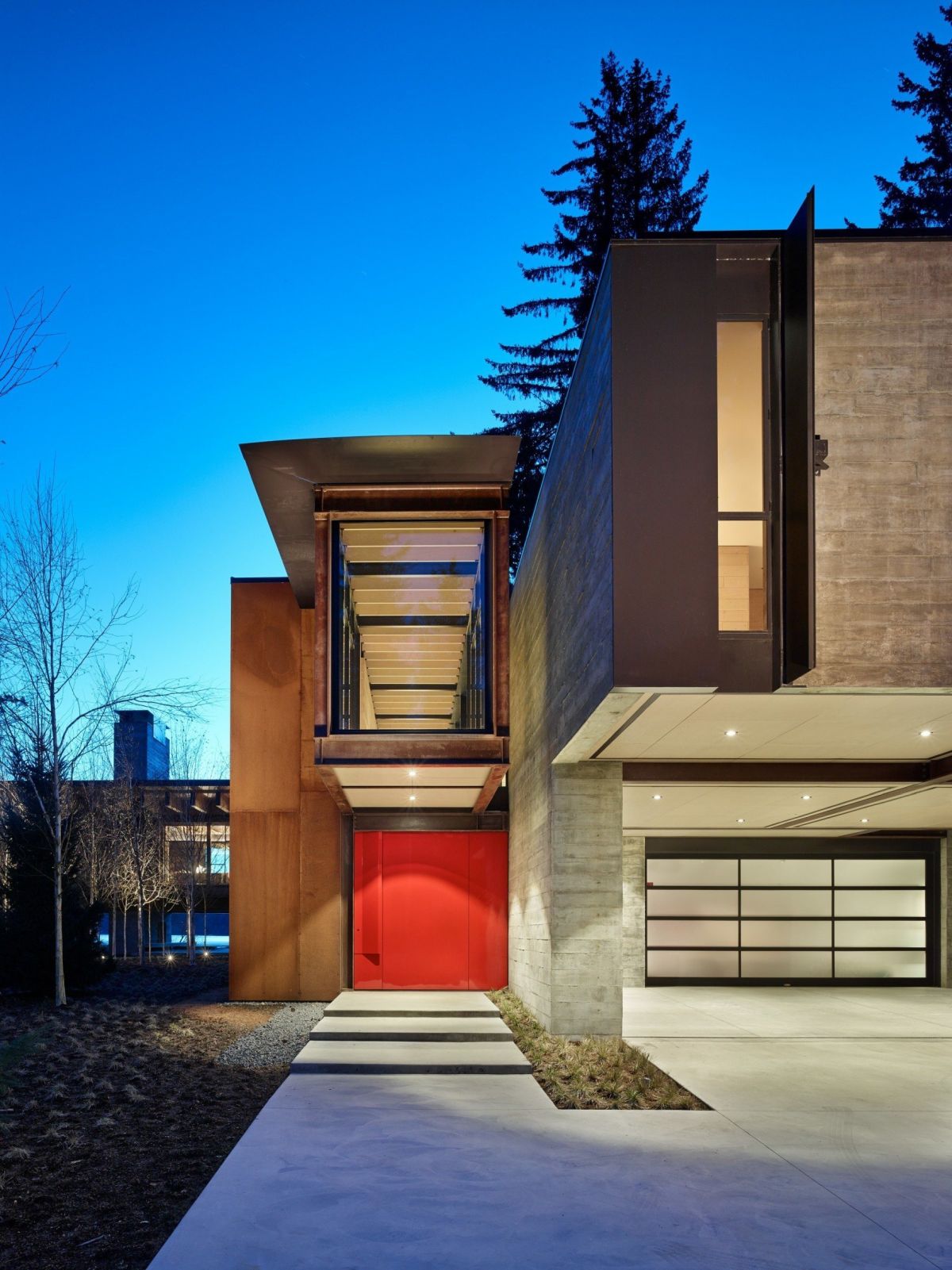 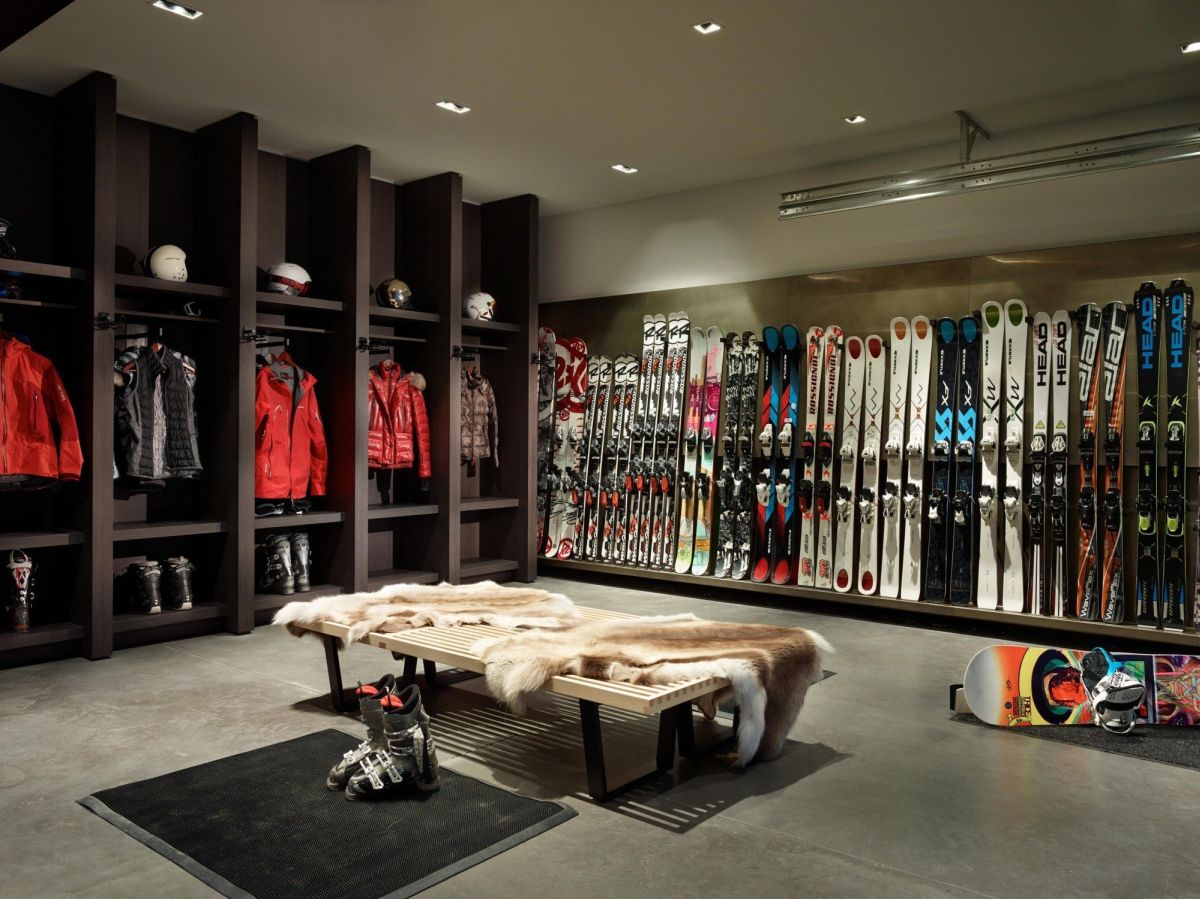 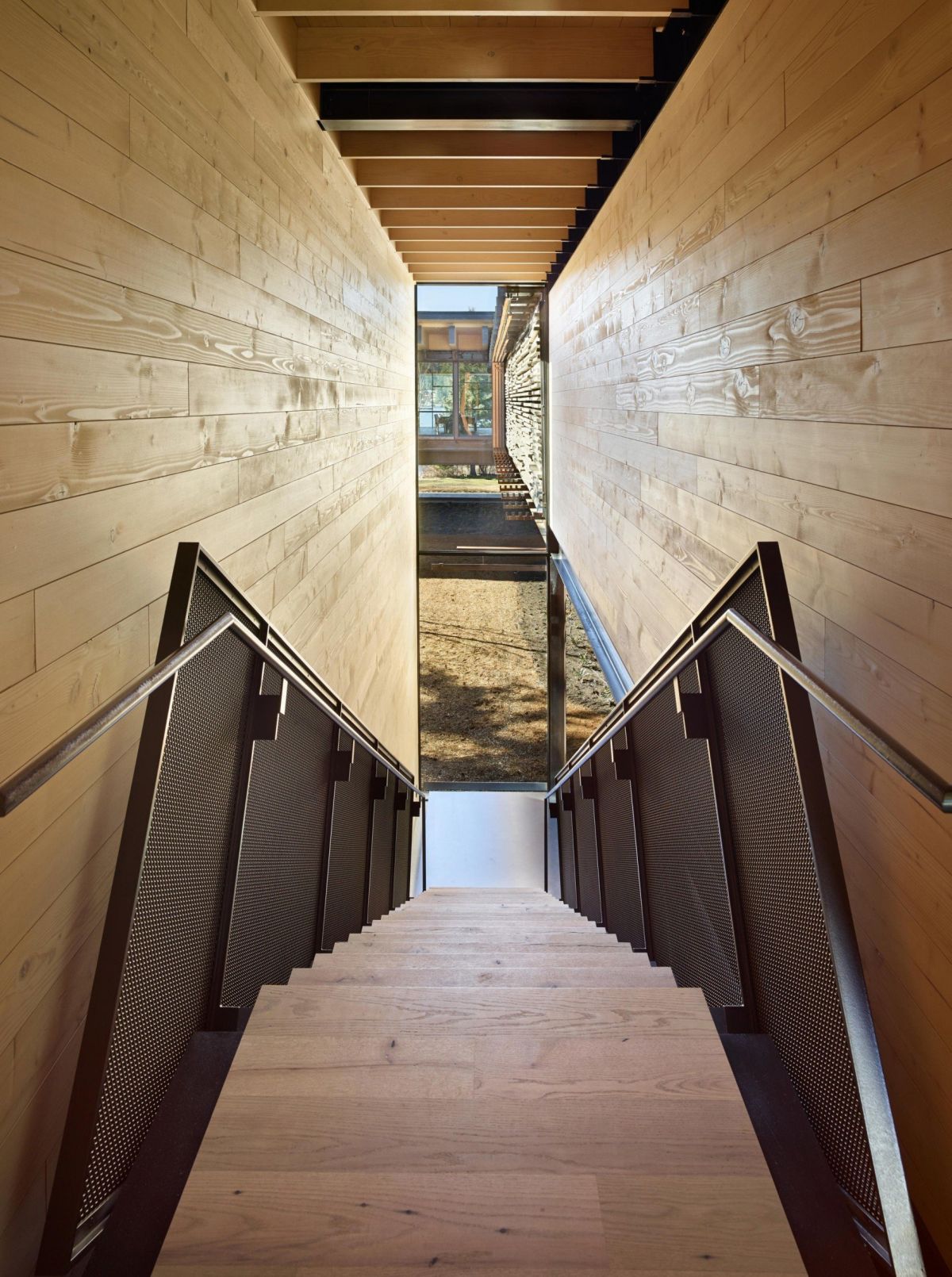 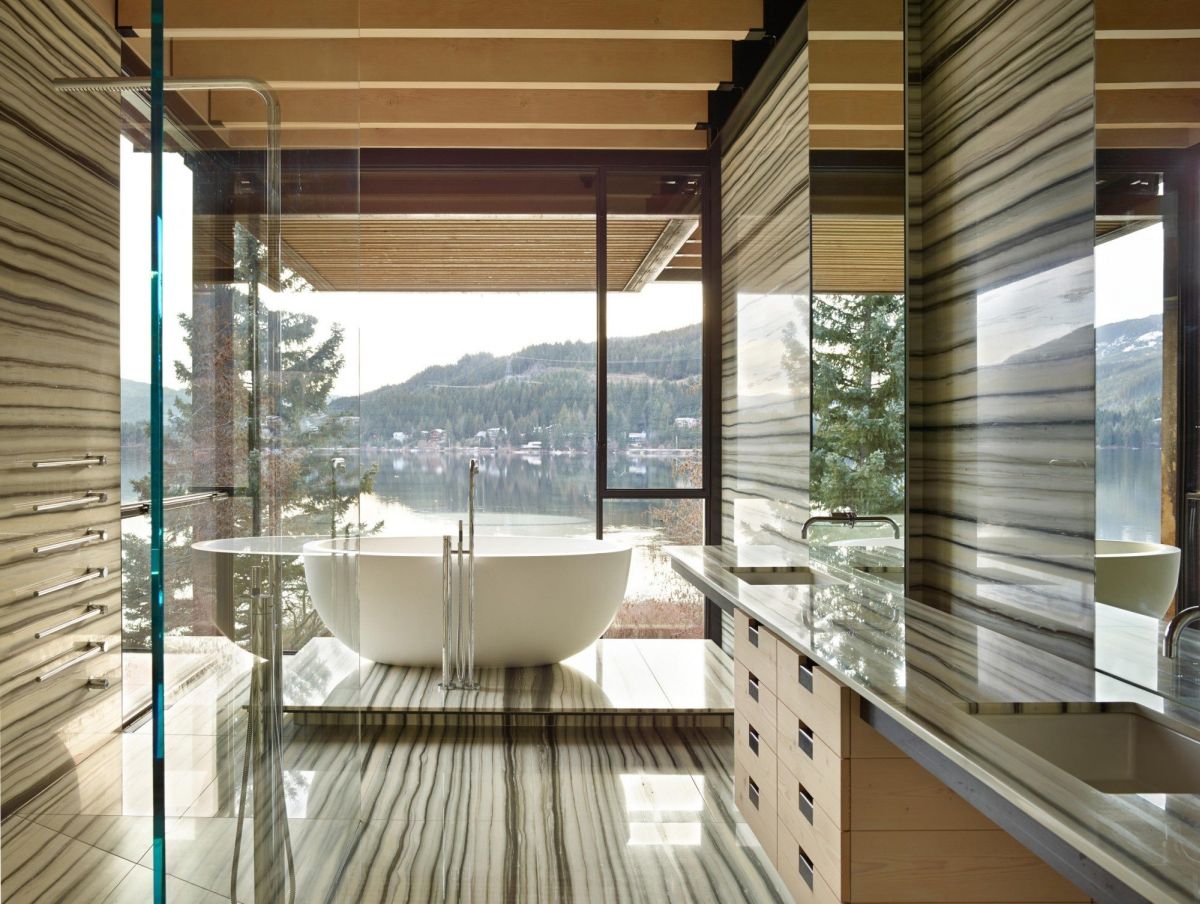 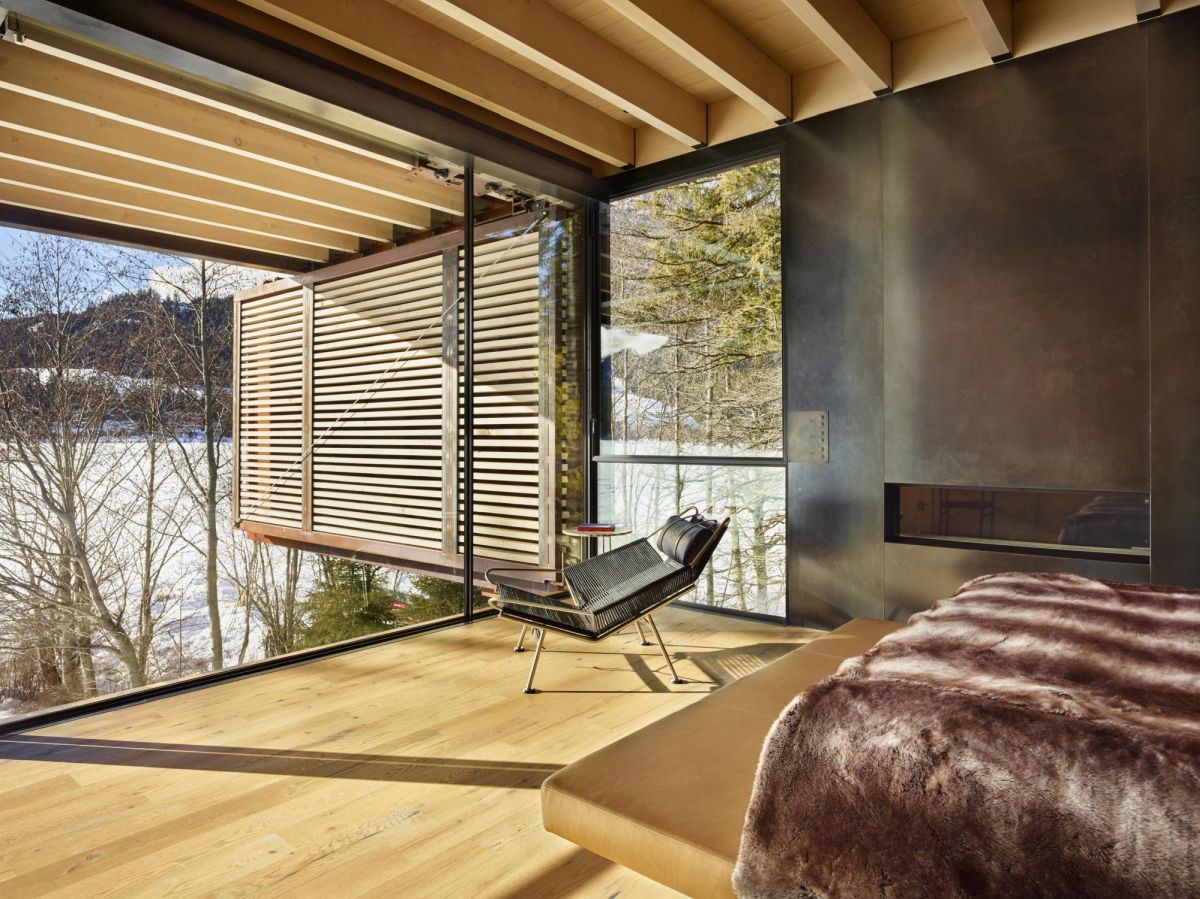 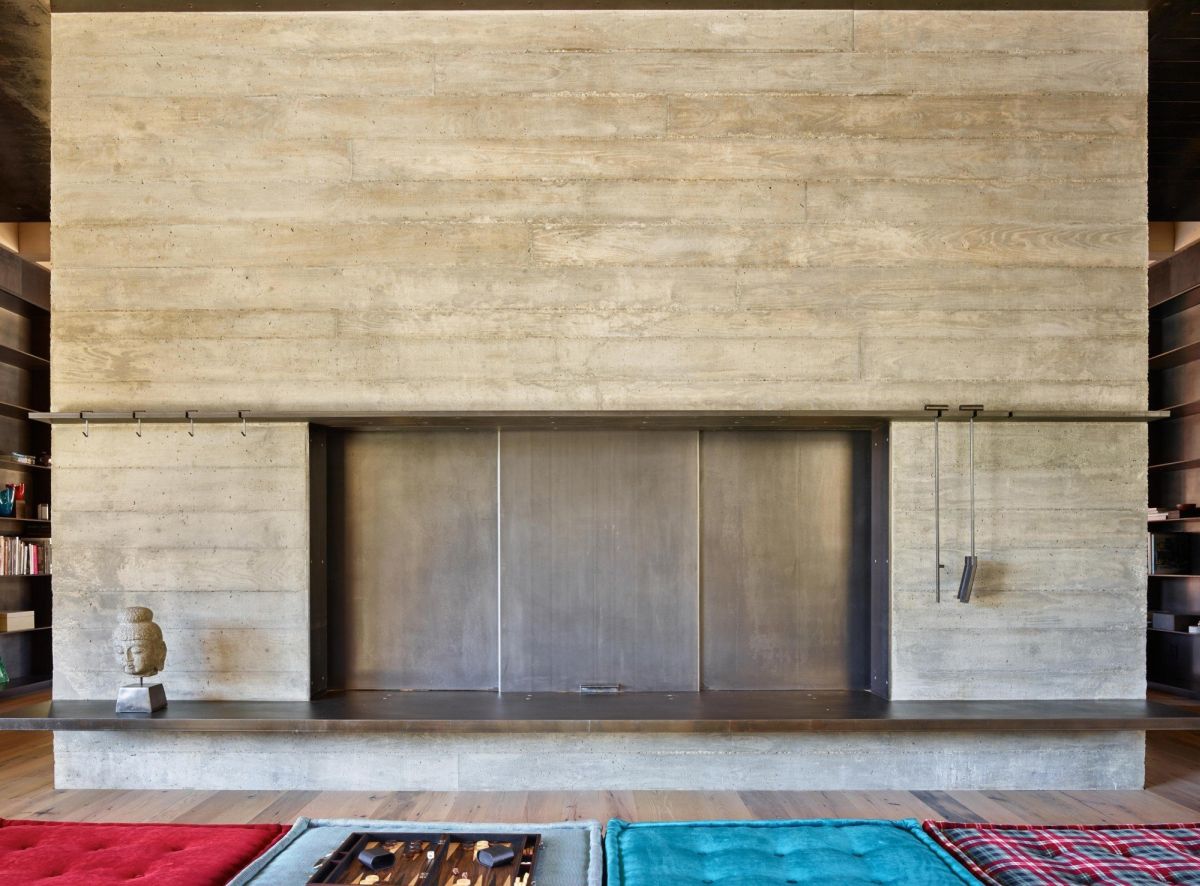 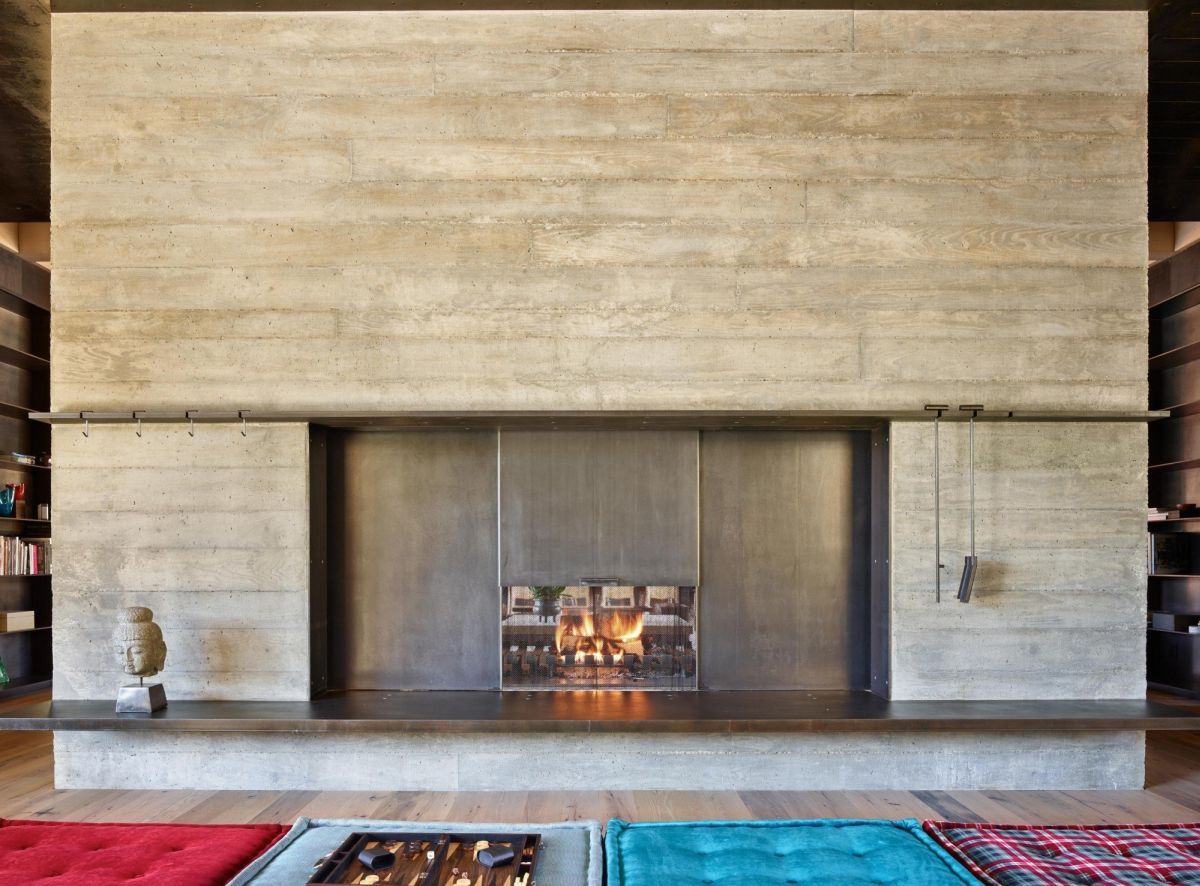 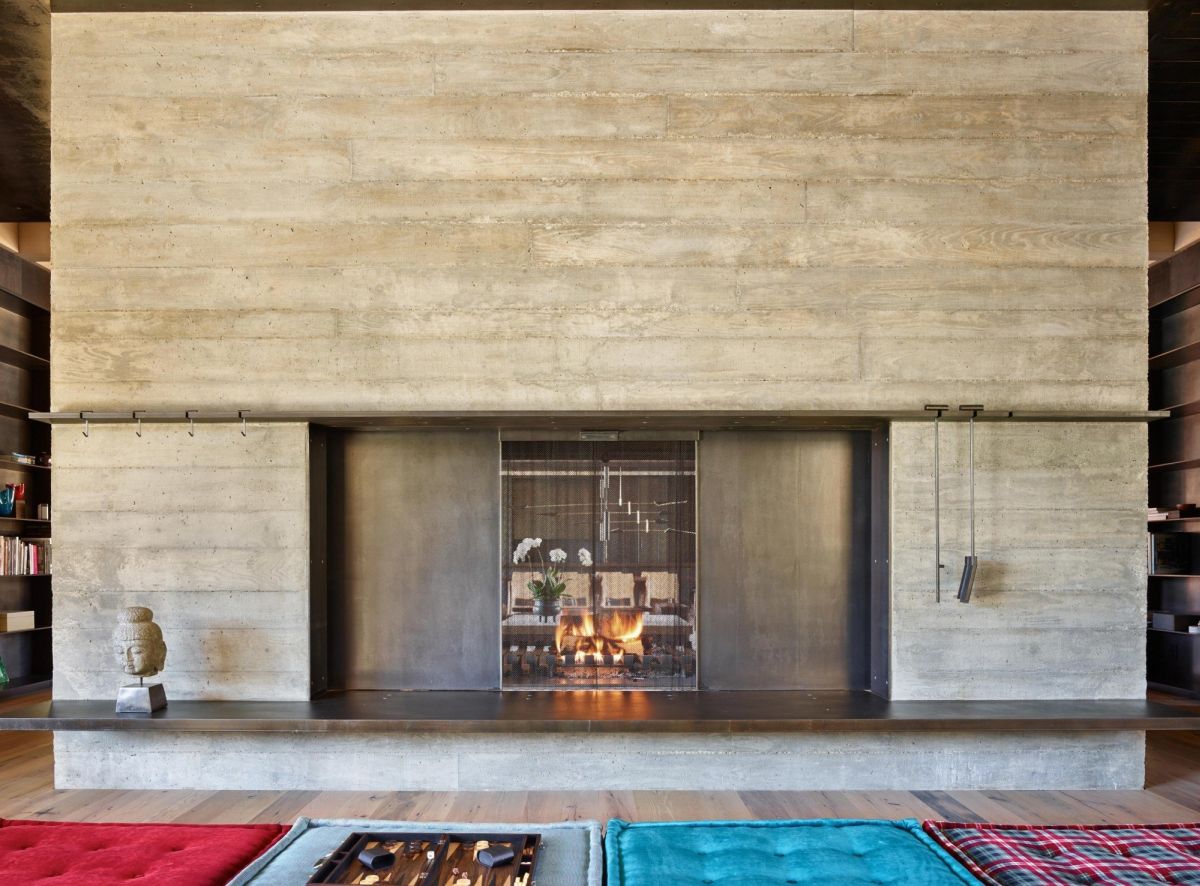 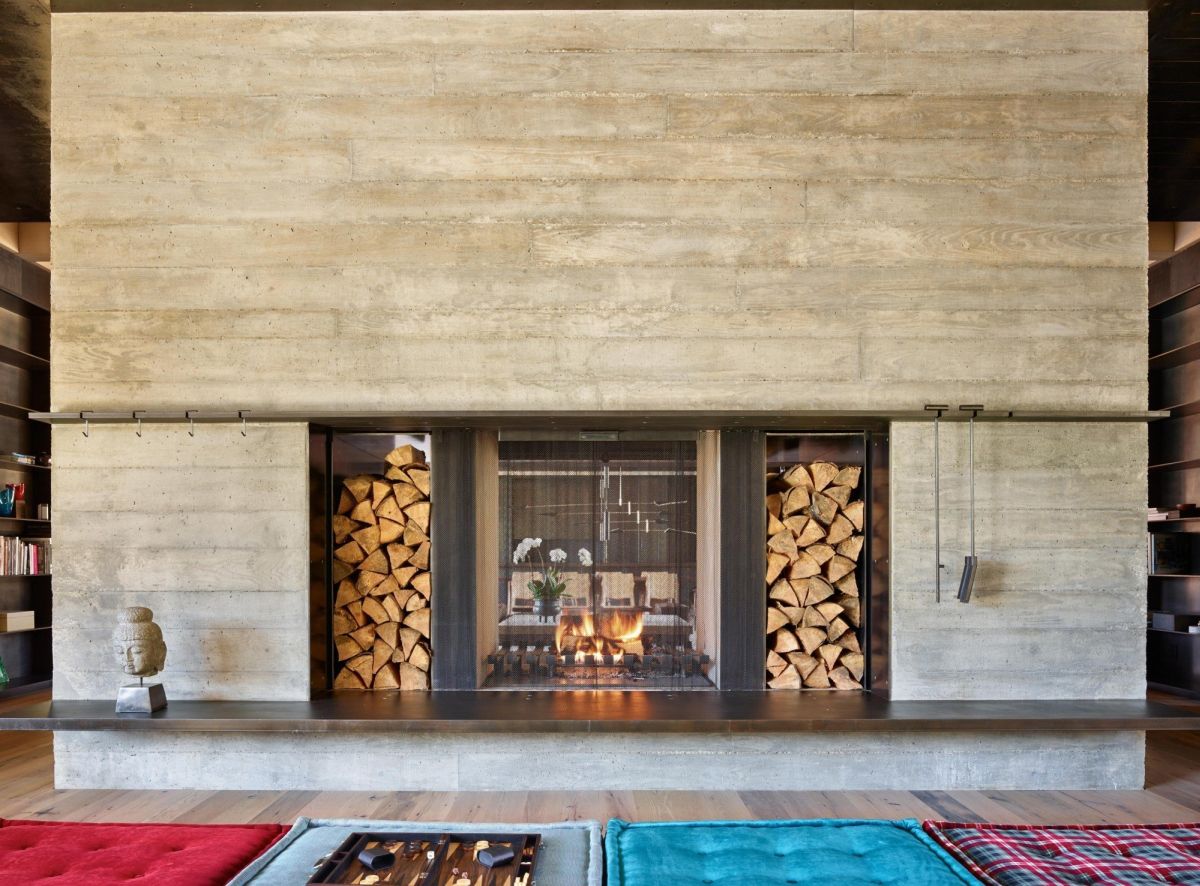 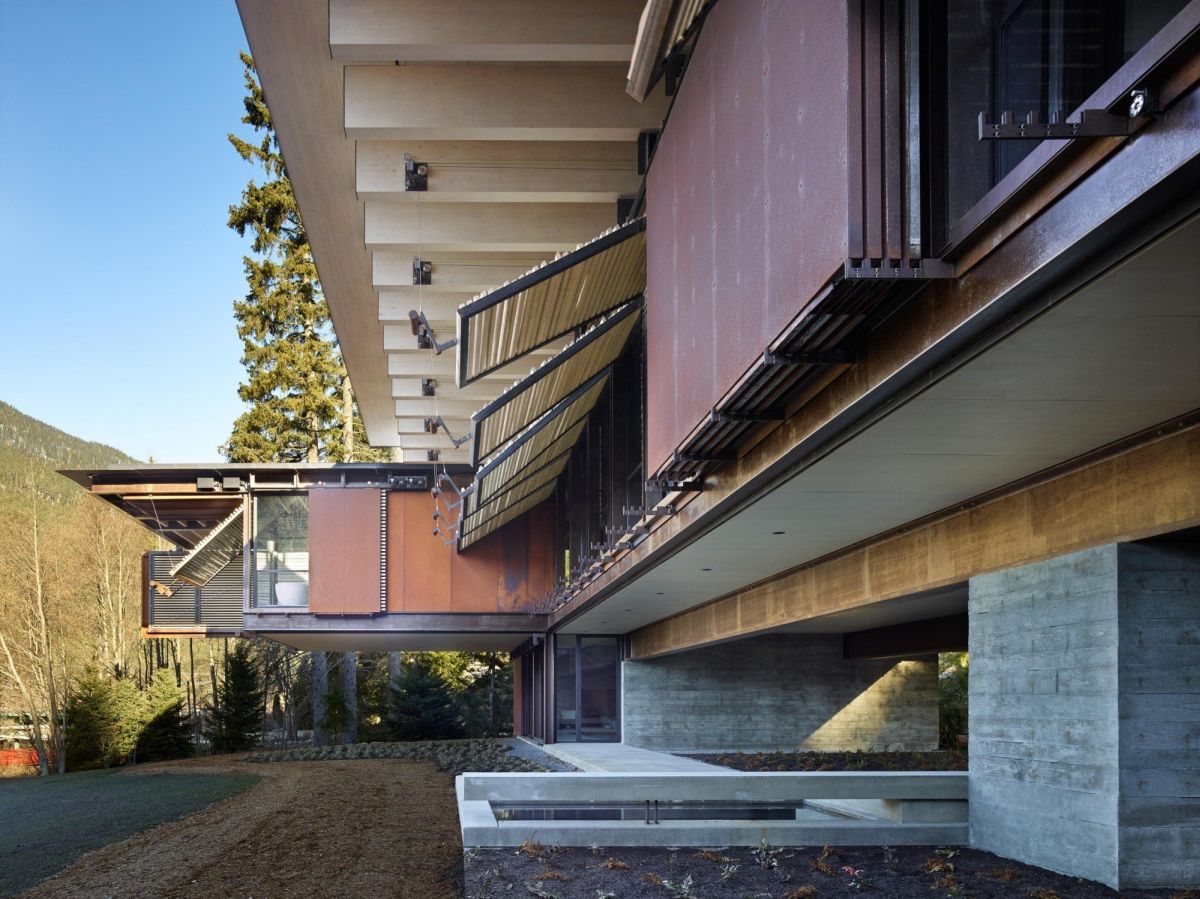 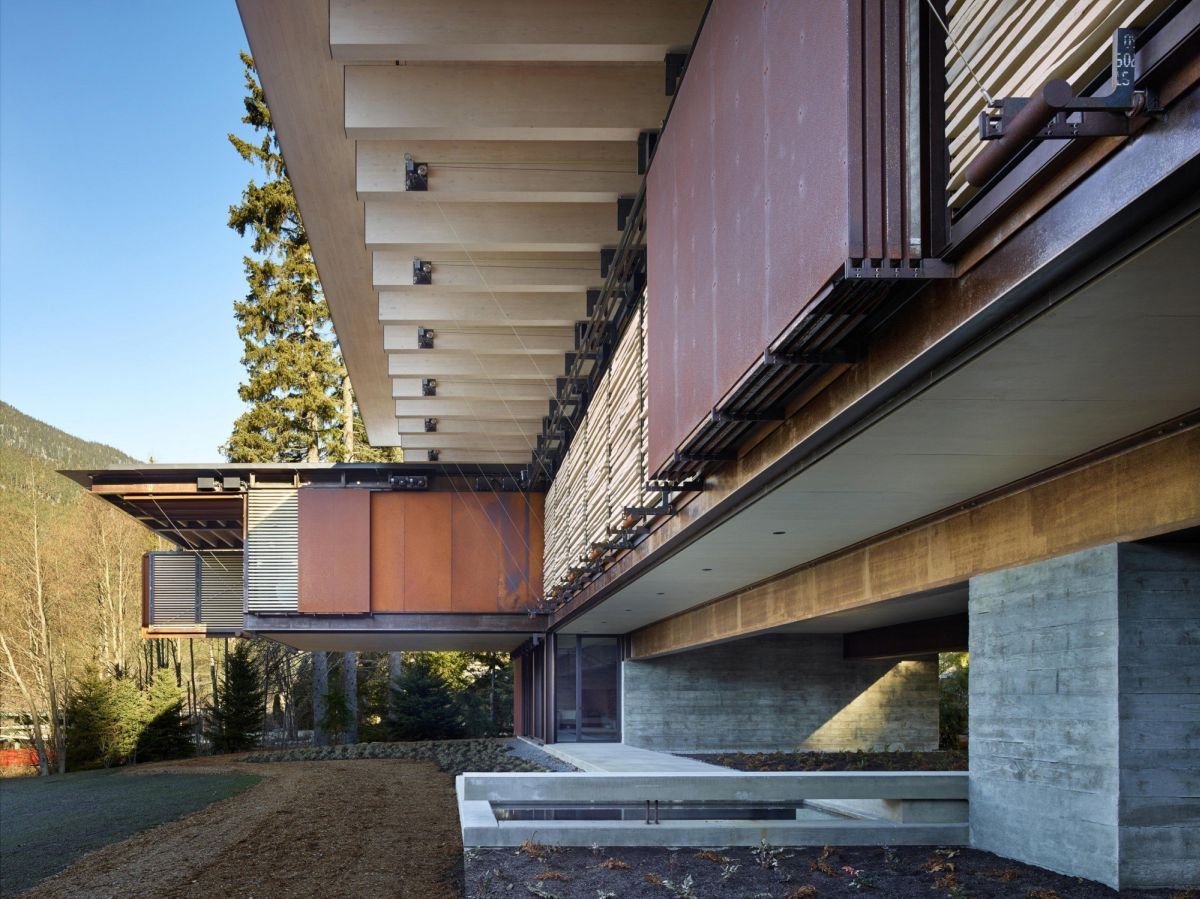 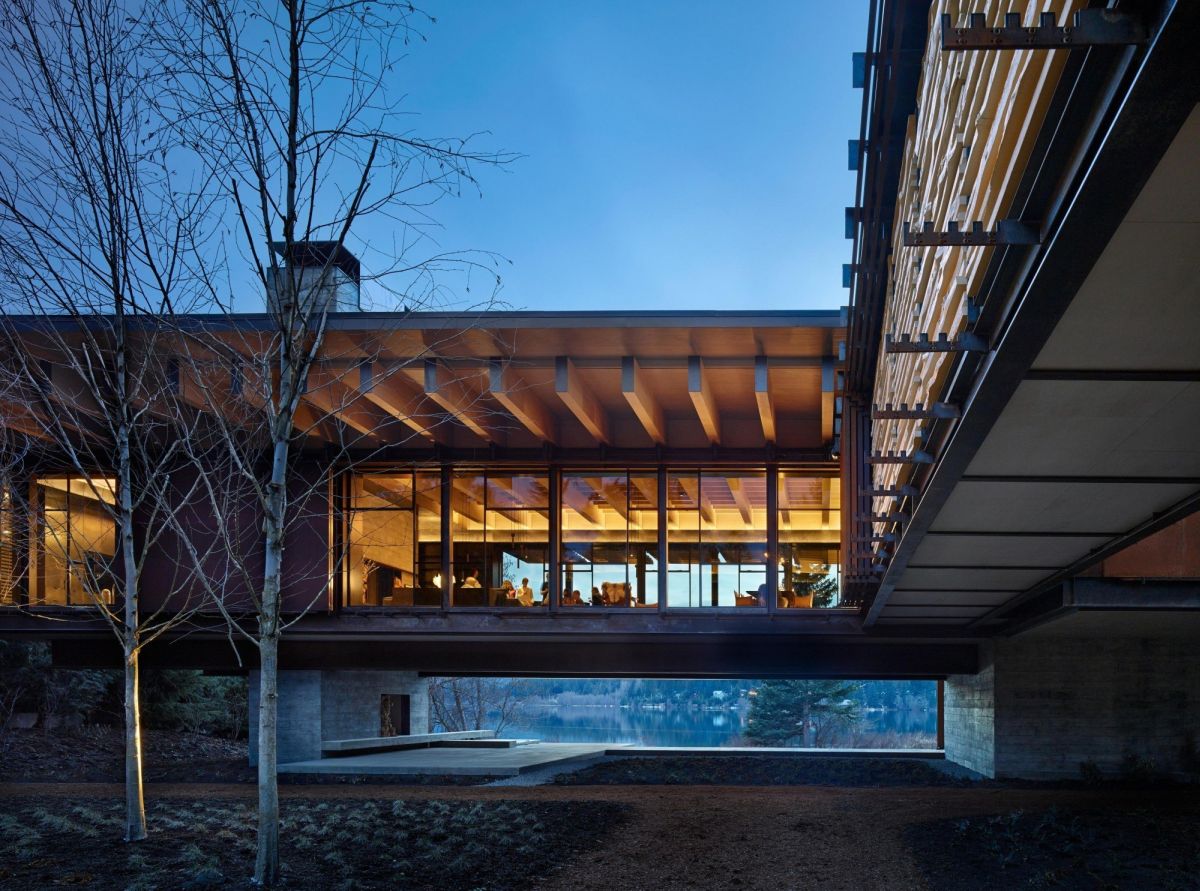 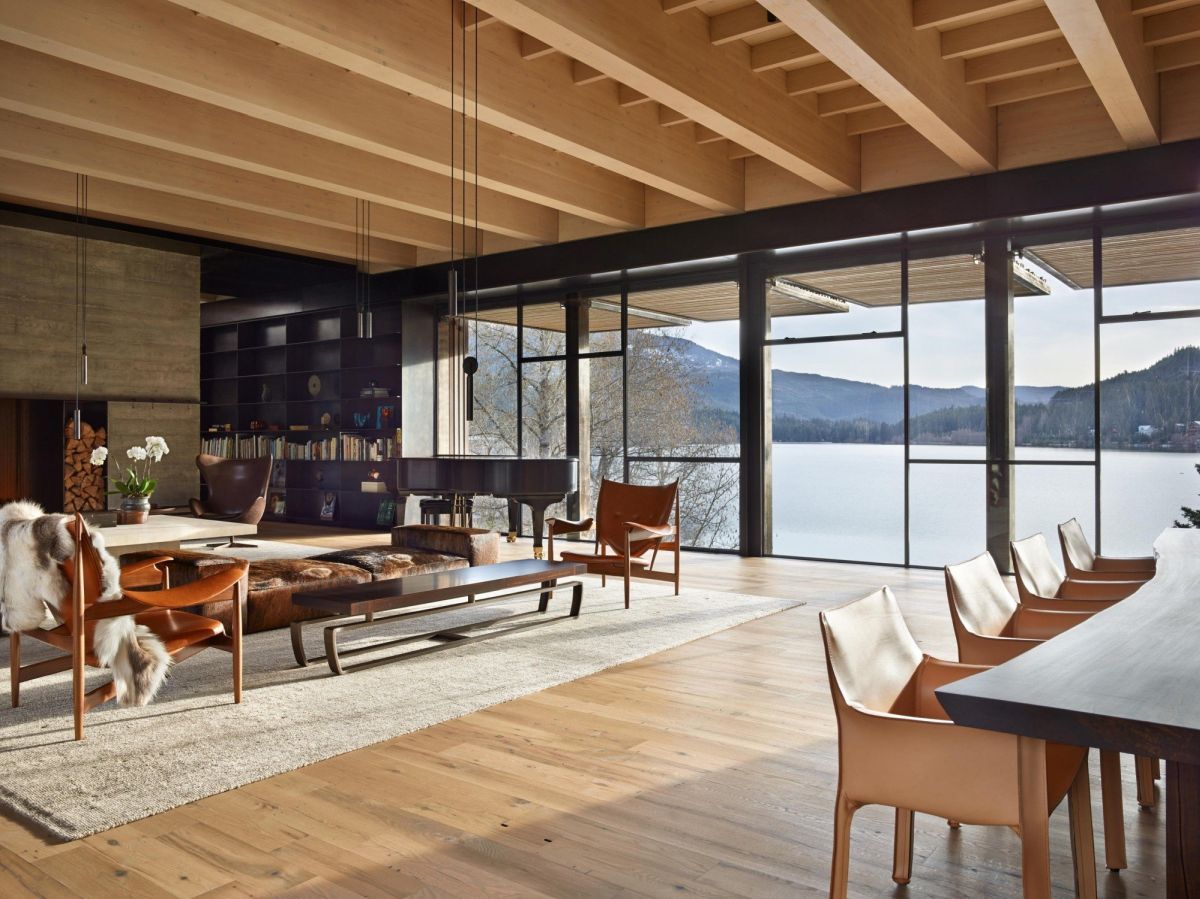 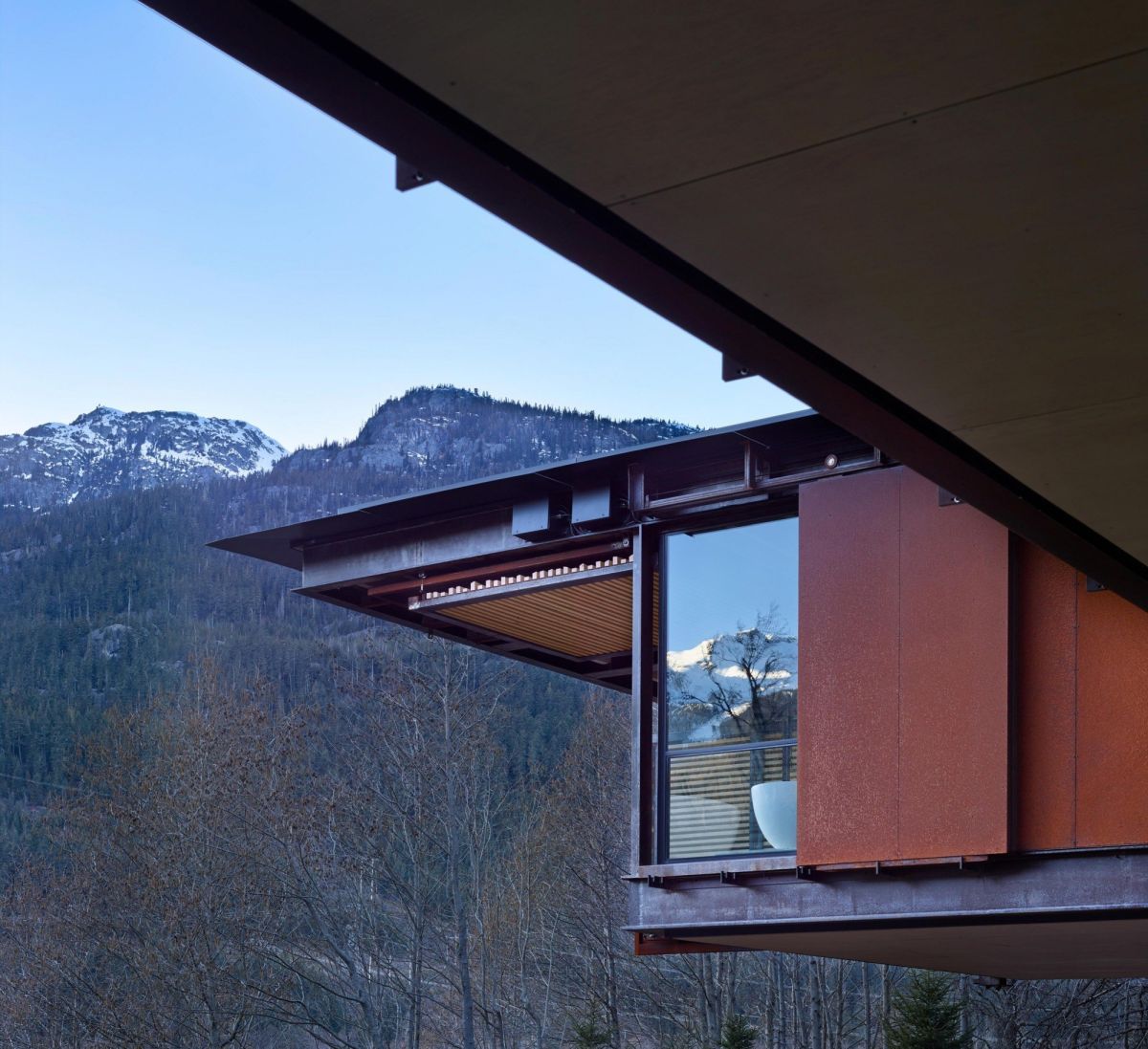 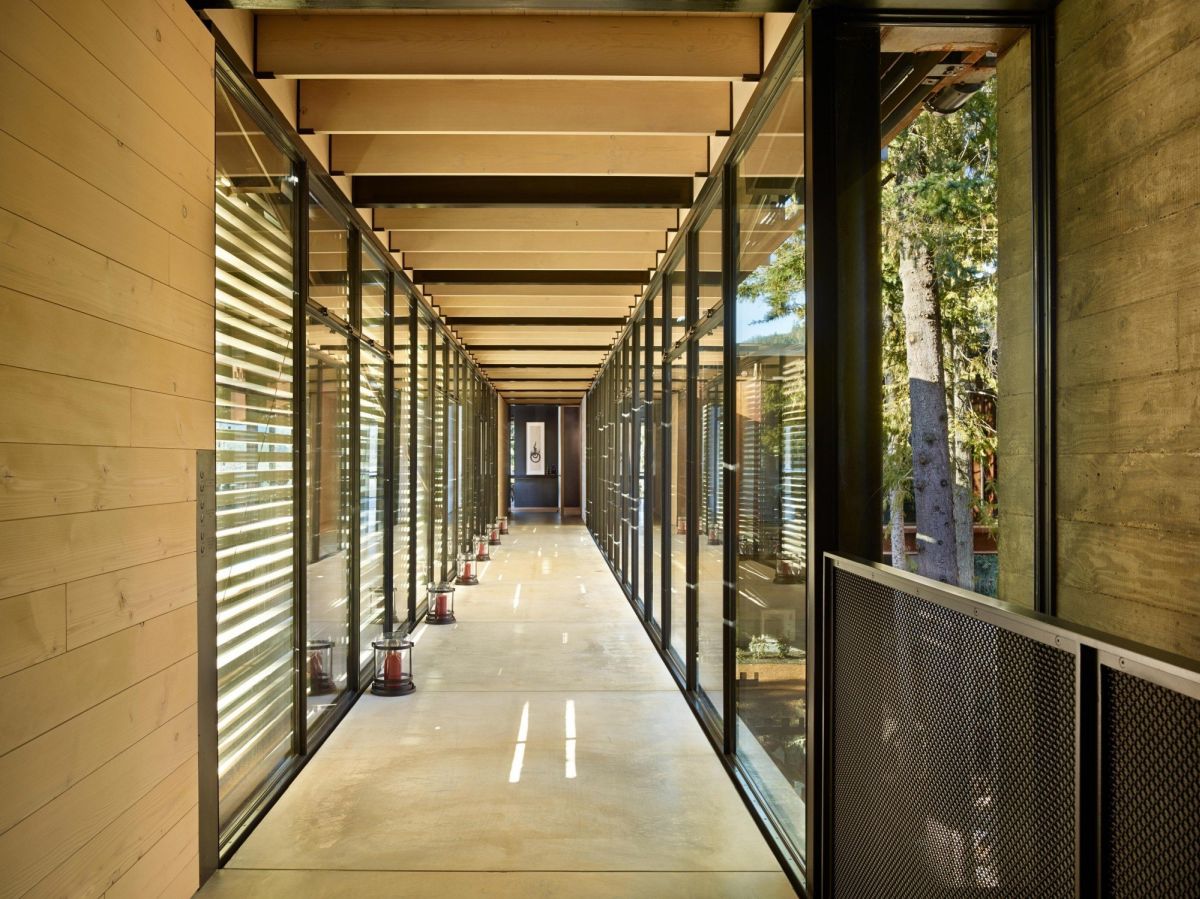 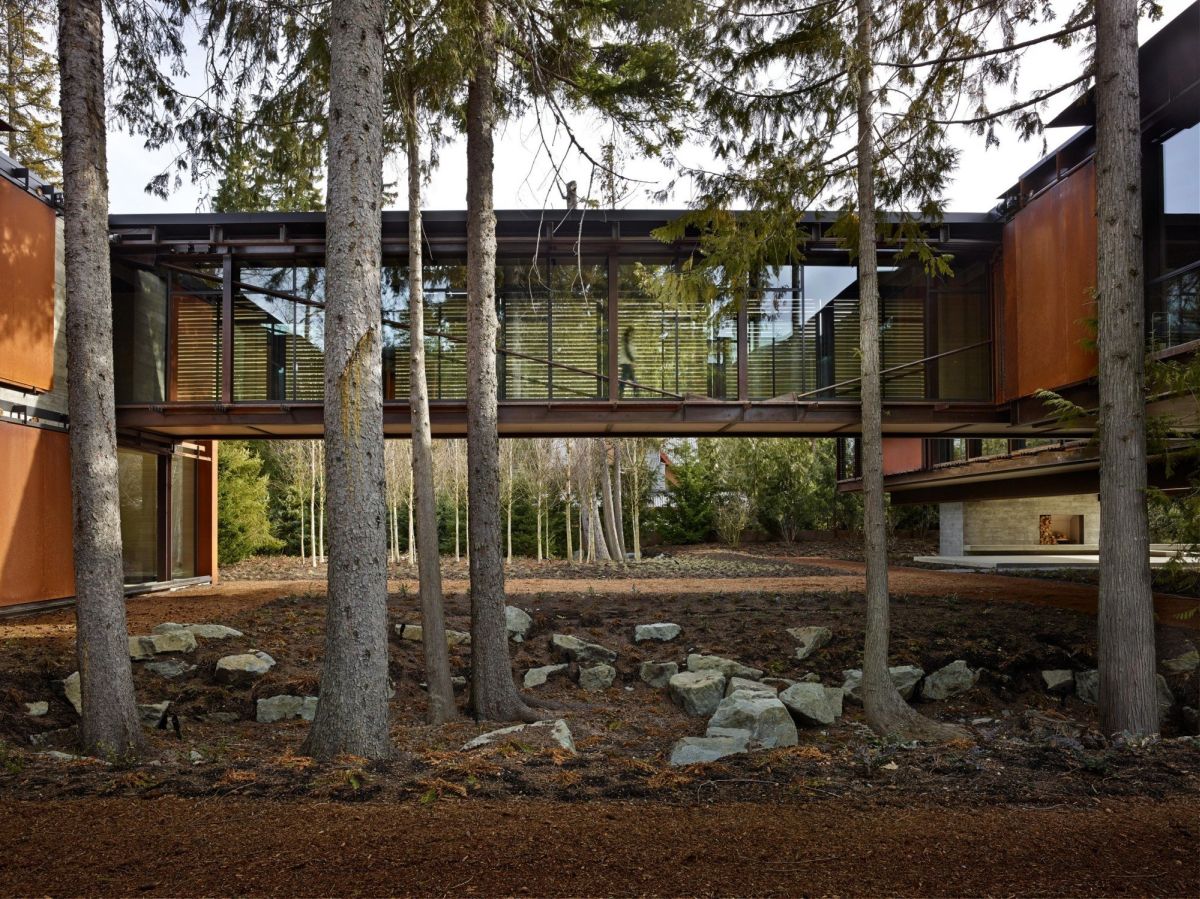 A modern yet cozy family retreat in the Coast Mountains of western Canada has all the creature comforts and style to spare. The terrain and mountain environment may be harsh, but the house is a modern oasis of all the amenities a family could want during a getaway.

Called the Whistler Ski House, the residence was built ten feet above the ground, which makes it look like is floating among the trees and above the snow. More than just a design feature, the elevation protects the main part of the house from the flood-prone lakeshore.

Conceived by Tom Kundig of Olson Kundig of Seattle, the house is actually two distinct buildings connected by a glass-walled bridge that spans 80 feet. The largest of the two wings contains the living and dining spaces, master bedroom, and two guest rooms. The second wing houses all the family’s children in four rooms. The wing has enough beds to accommodate not only the kids, but their friends as well.

While the main aim of the bridge between the two wings may be to create privacy, it also adds an interesting design feature because it weaves through a stand of evergreen trees. The views to the outside, as well as of the bridge from the outside, are grand. Separating the two parts of the house also preserves more trees and adds opportunities for additional windows to capitalize on the views. One side of the house features floor-to-ceiling windows that offer an expansive view of the mountain lake at the bottom of the property, as well as the forest of aspens, firs and hemlocks beyond it.

One of the most intriguing elements of the house is a custom horizontal shutter system. The design not only creates privacy, but it also protects textiles, upholstery and art inside the house from fading due to the harsh snow glare. It’s a simple system that uses crank and switch controls to transform the façade according to the weather and the family’s needs. The shutters can convert the front from a bank of windows to one that is semi-exposed, shielded by raw-edged Douglas fir louvers. For more severe weather or when the family is not in residence, the windows can be completely covered by weathered steel panels.

The home site had more challenges than just a flood-prone lakefront and extreme winter weather. The soil on the lake shore is very soft and deep, and the entire plot is in an area at high risk of seismic activity. For this reason, architects had to design a continuous 2-foot thick raft slab to support the house. The slab is set on densified soil that was prepared using a series of vibro-densified rock columns penetrating 60 to 68 feet into the ground.

The slab “floats” on the fortified soil, allowing the house to remain stationary during an earthquake that could cause the unimproved soil to slide down into the lake.

Inside, the house has great style and a very sophisticated yet relaxed ambiance. Plenty of open space makes the area flexible for all the things a larger group of family and friends will want to do. Comfortable furniture and cozy throws add to the warmth of the light-filled space. Clean lines and an unclutter visual lines throughout make it aesthetically pleasing.

The home’s large fireplace is also out of the ordinary. The mammoth concrete fireplace is double-sided, maximizing its usage and serving as a divider at the same time. The fireplace structure separates the main living and dining area from the media room on the other side. It also features custom enclosure doors that slide, allowing the homeowners to adjust the size of the fireplace opening in the media room, which is a smaller space.

The “adult” section of the house is a retreat like no other. Uncluttered bedroom designs put the focus squarely on the spectacular view outside, which is the star of the property, day or night.  The minimalist decor, combined with the wood, create a warm and stylish bedroom.

Perhaps some of the most stunning views can be seen from the master bathroom. Floor to ceiling windows surround the soaking tub, making it a fantastic place to unwind after a day of outdoor activities. The minimalist design of the space only serves to highlight the views. A stunning stone floor with dramatic, dark striations pulls the eye through the room to the tub and the view beyond.

Natural wood stairs to the ground level outdoors are nestled between the two sections of the house. The side railings are accompanied by an architectural grid that adds an element of safety as well as a visual complement.

The ground level includes a garage, screened terrace and ski room, which is the epitome of an organized hub for the winter activity. With an entire family that loves the sport, the homeowners needed a way to safely and neatly store all the equipment as well as corral the wet gear after a long day on the slopes. A full ski rail and individual cubbies for coats helmets, and ski boots line the walls and a large bench sits in the middle. The ground-level room is an easy first stop before heading upstairs.

The front facade of the house is also fashioned from natural shades of wood, stone and metal with one exception: The oversized, red entry door. It’s a dominant pop of color on the otherwise neutral structure. Just three large steps with a low rise lead up to the entry, which is separated from the garage entry by a stone column.

Underneath the house atop the floating slab, an outdoor fireplace is built into one of the stone supports. It features a built-in concrete bench, which turns the slab into an architectural design element and not just a necessary function one. The house above adds shelter from the elements, increasing the number of occasions the family can enjoy the fireplace.

Taken all together, the unique and luxurious elements of this property create a dream mountain getaway for a family that enjoys skiing and the great outdoors.