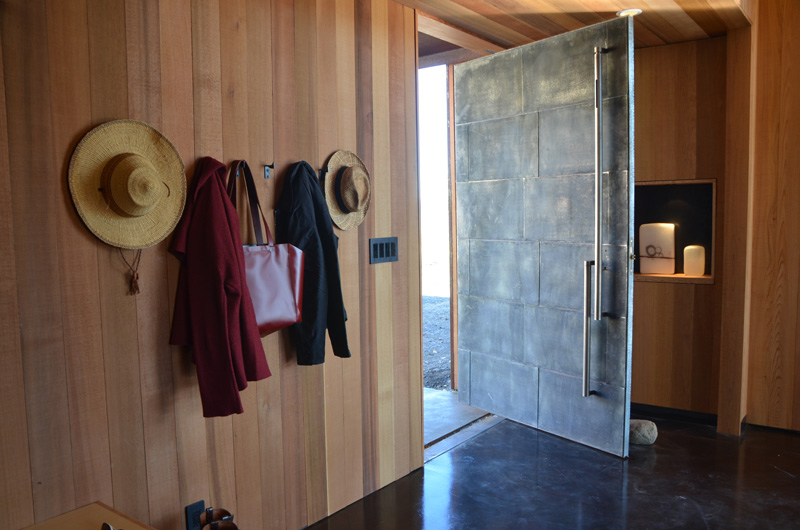 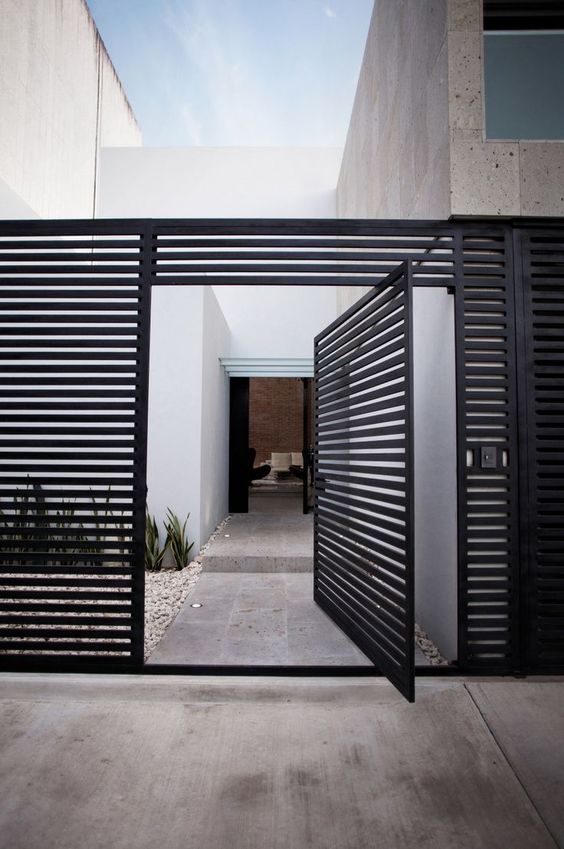 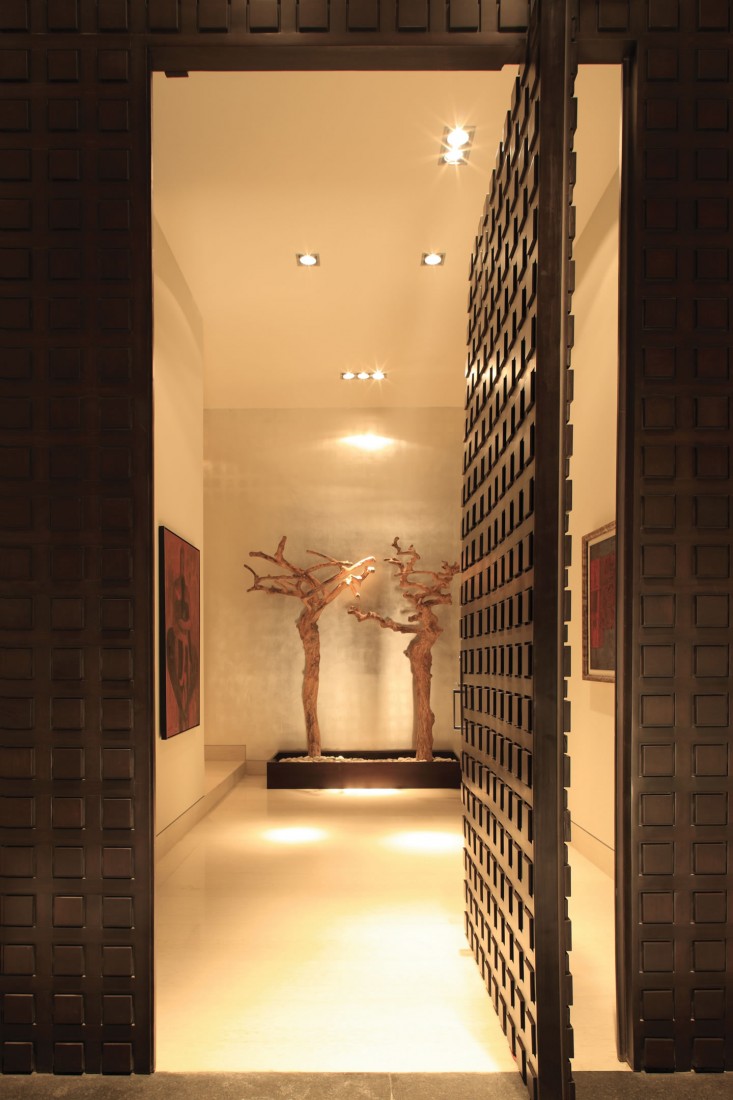 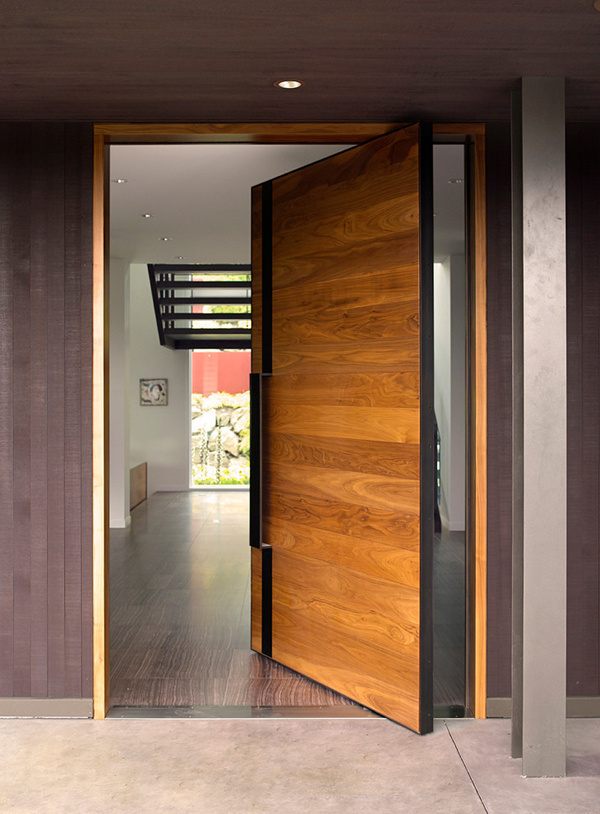 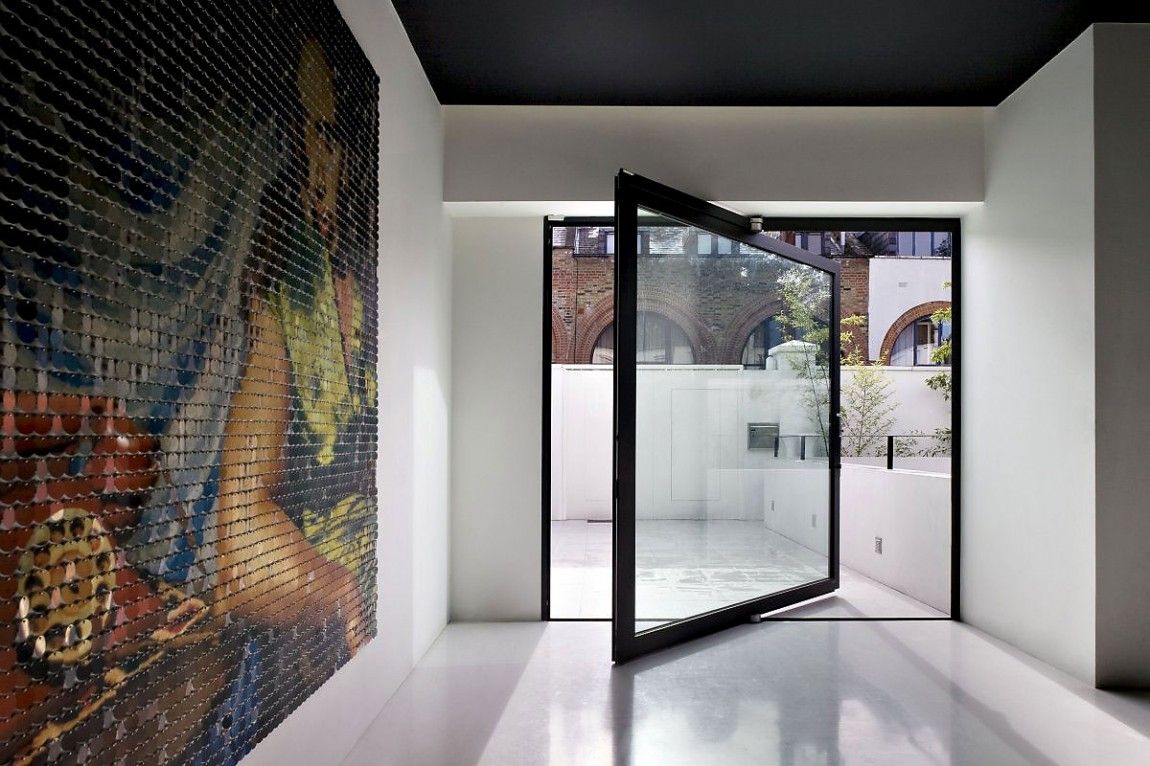 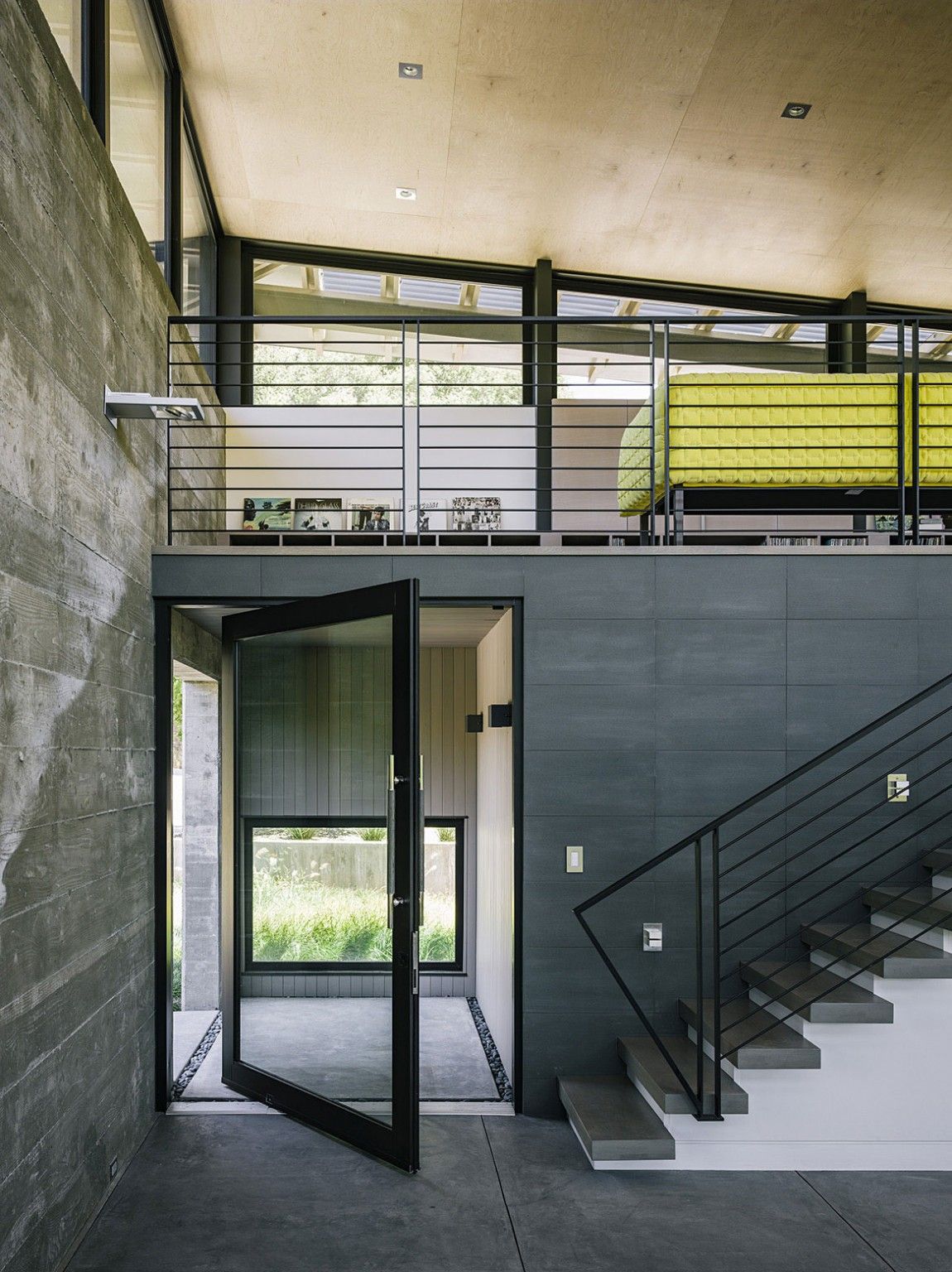 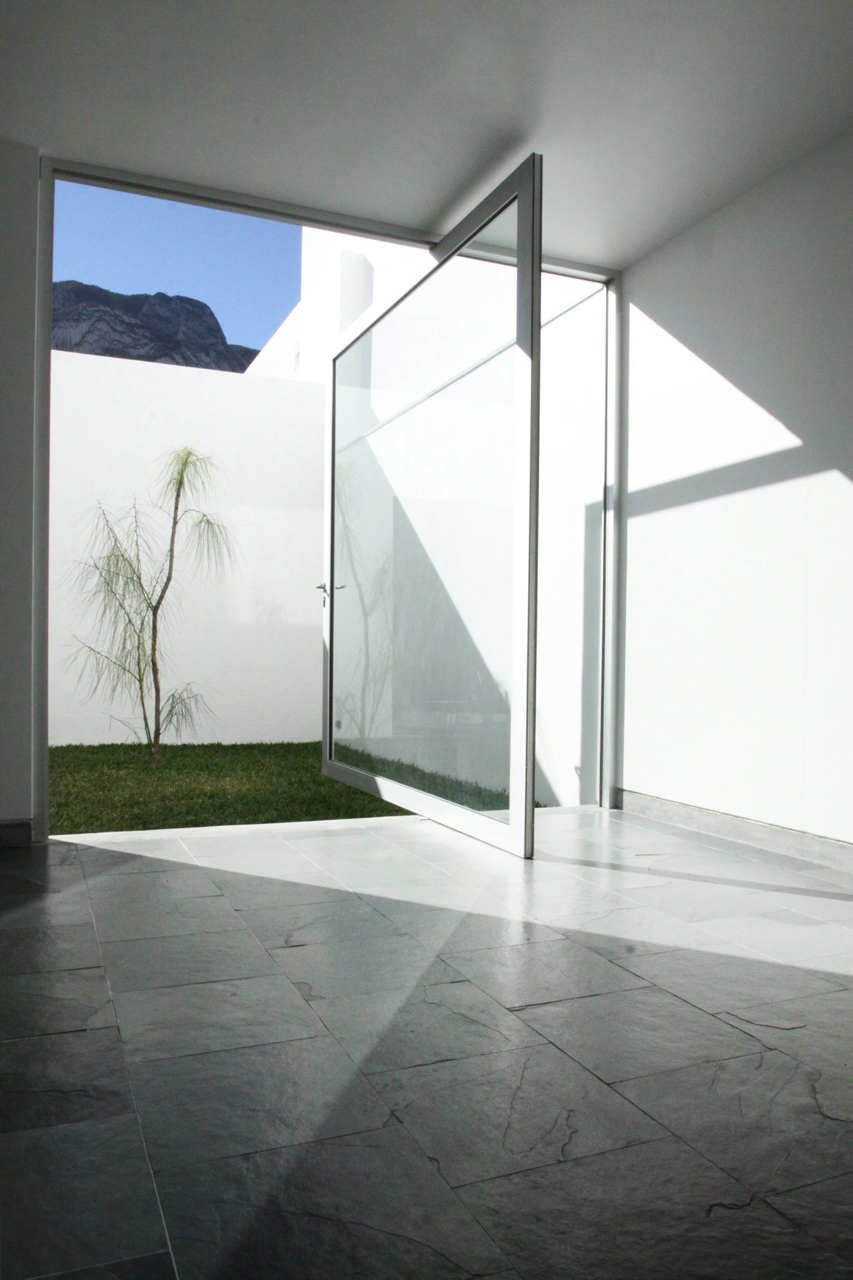 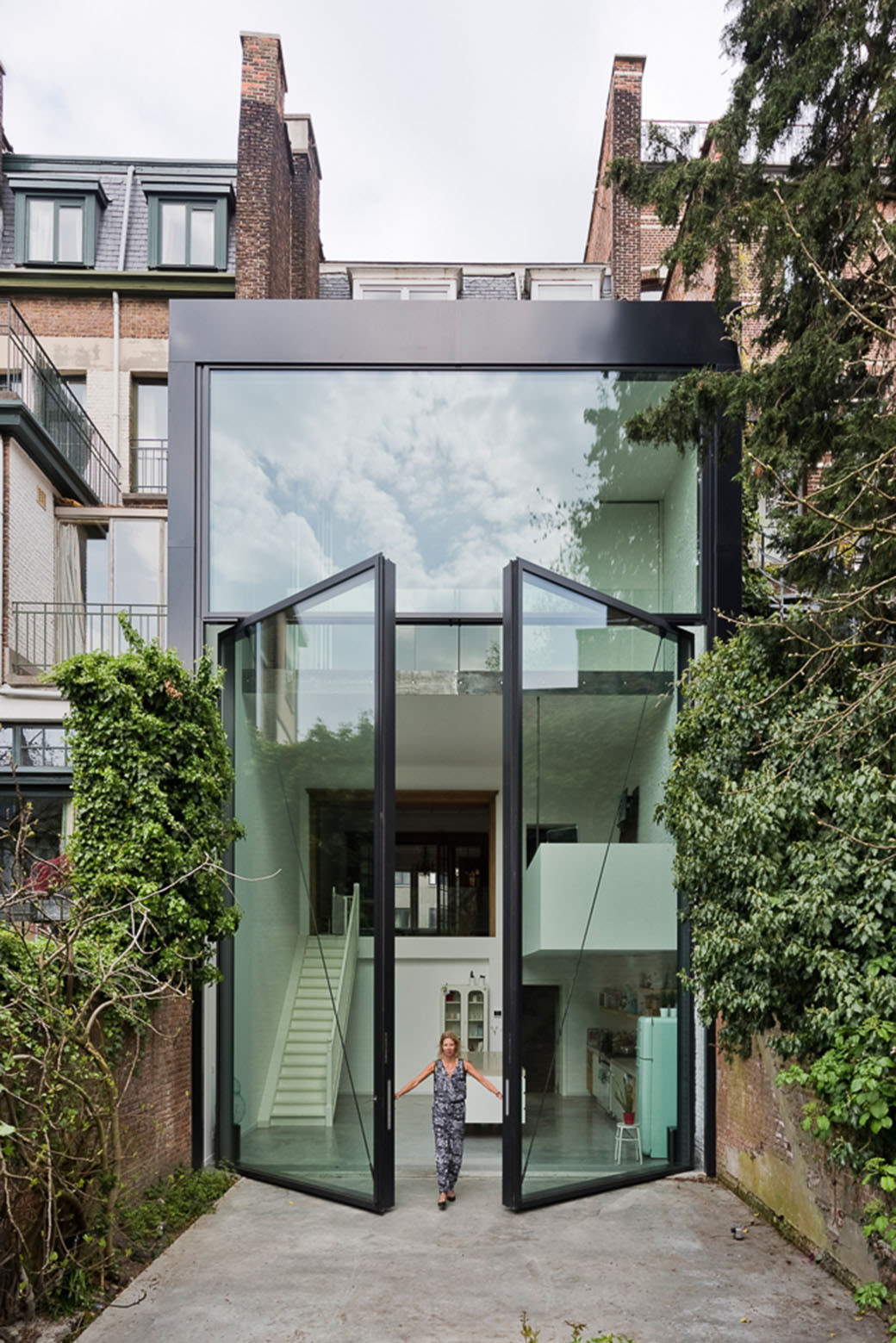 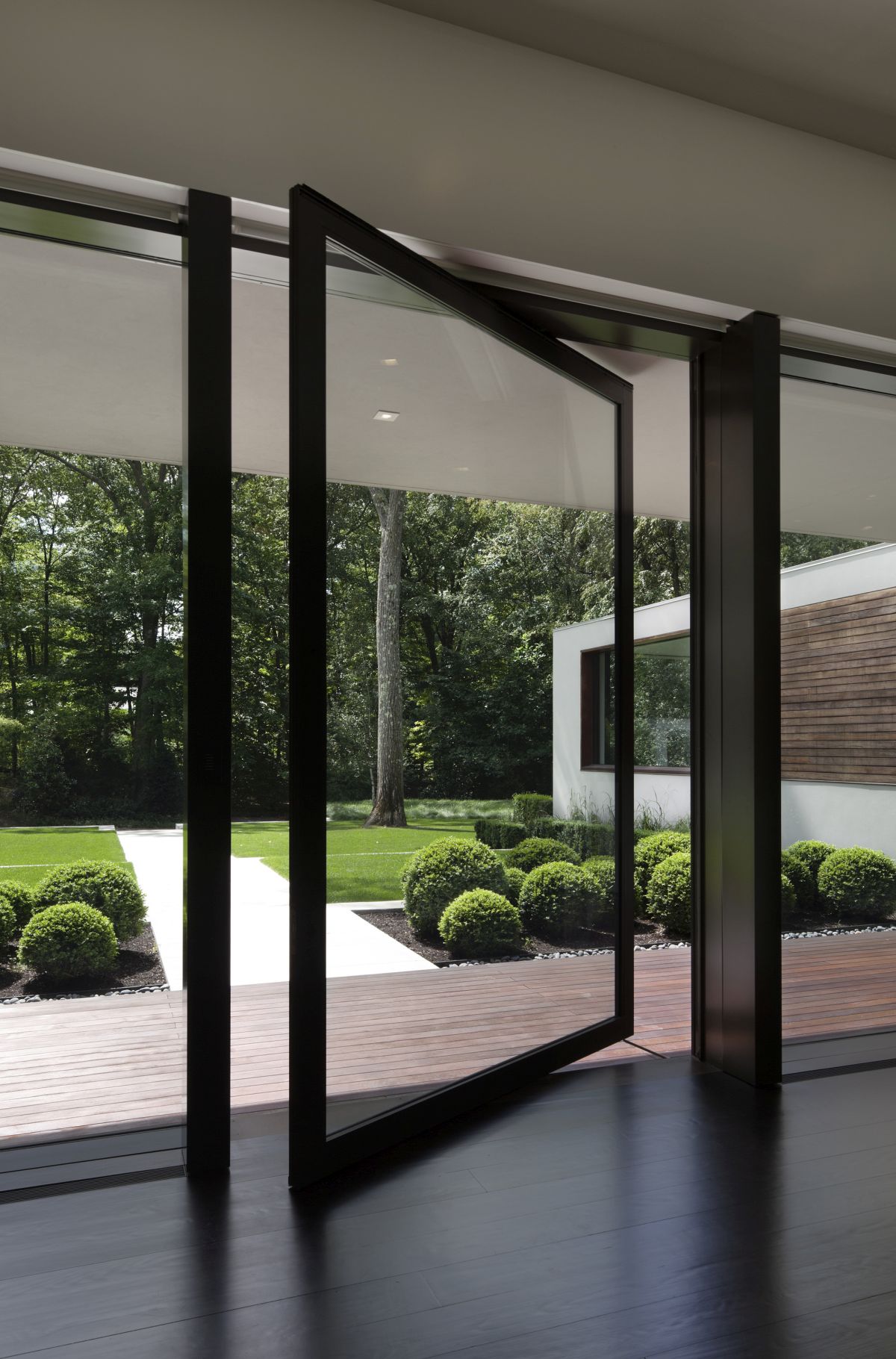 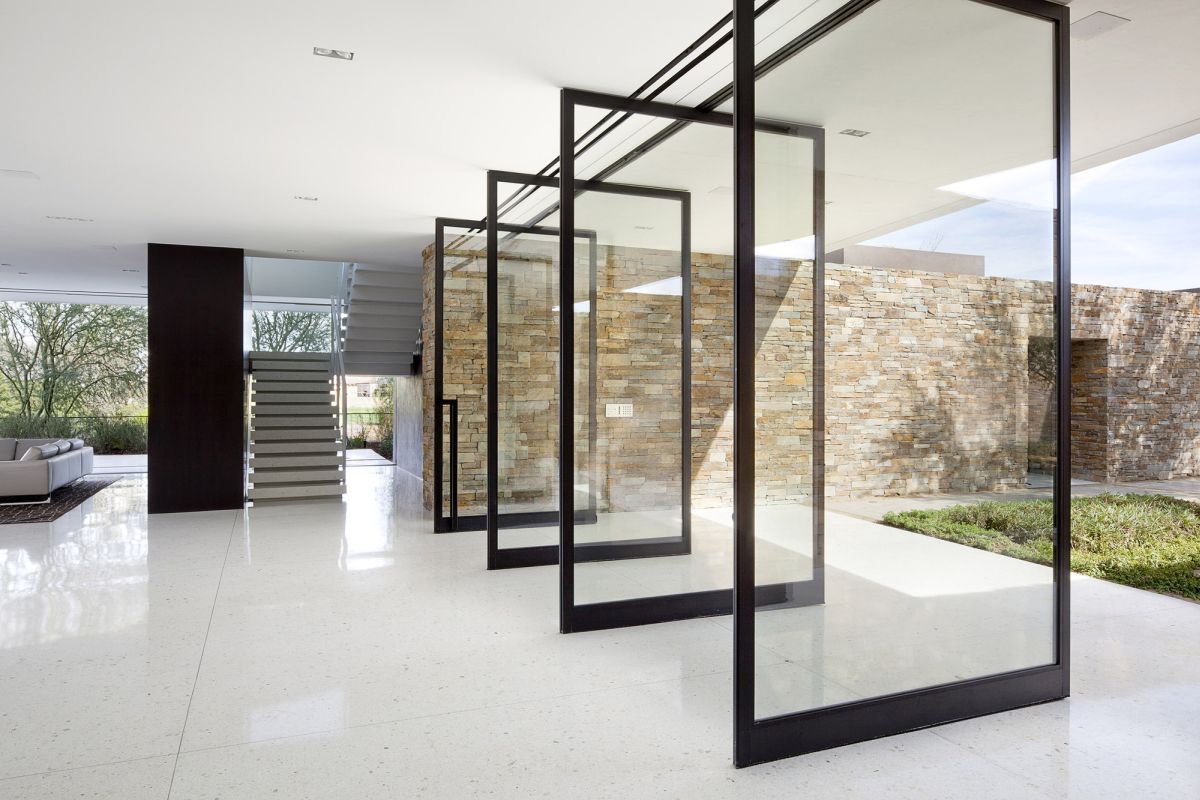 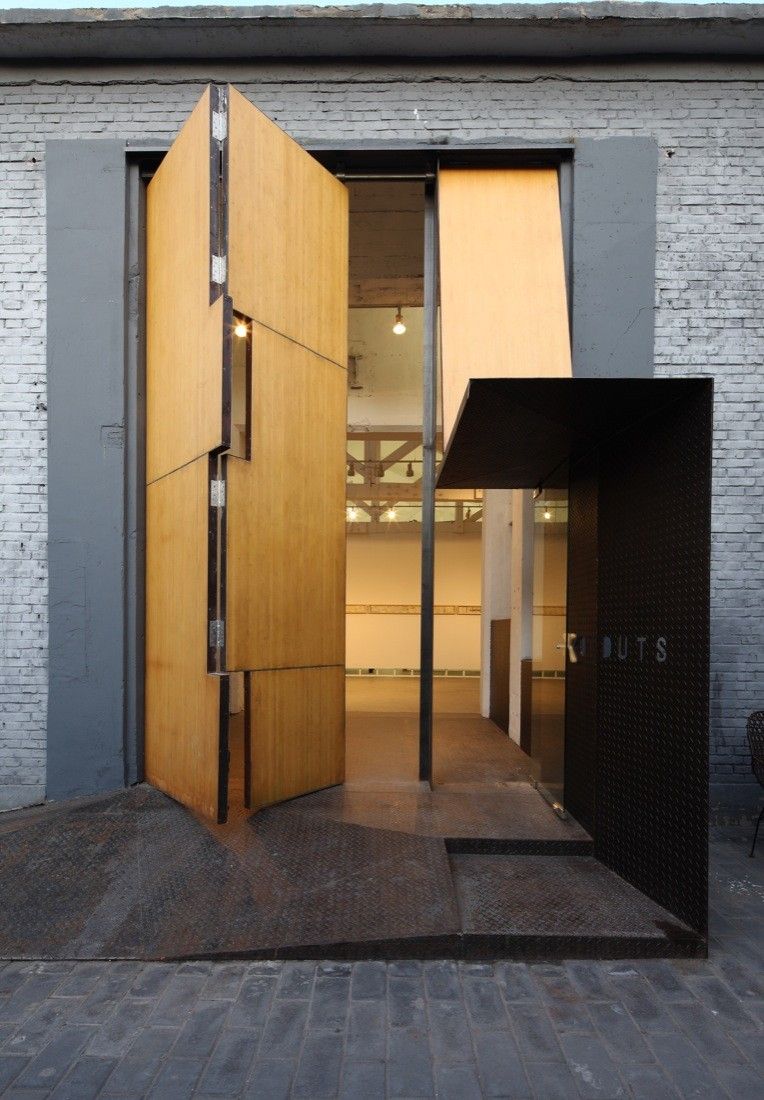 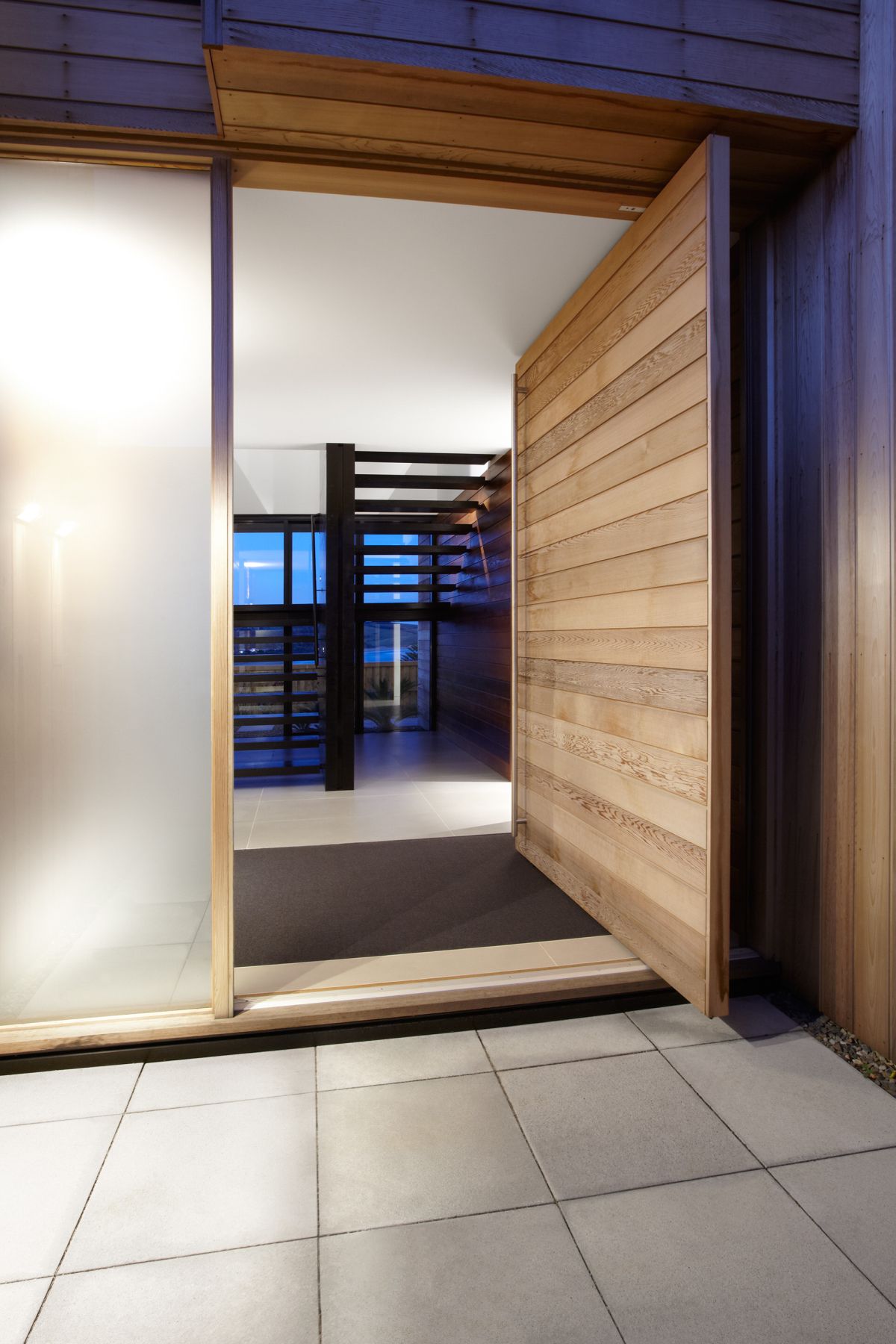 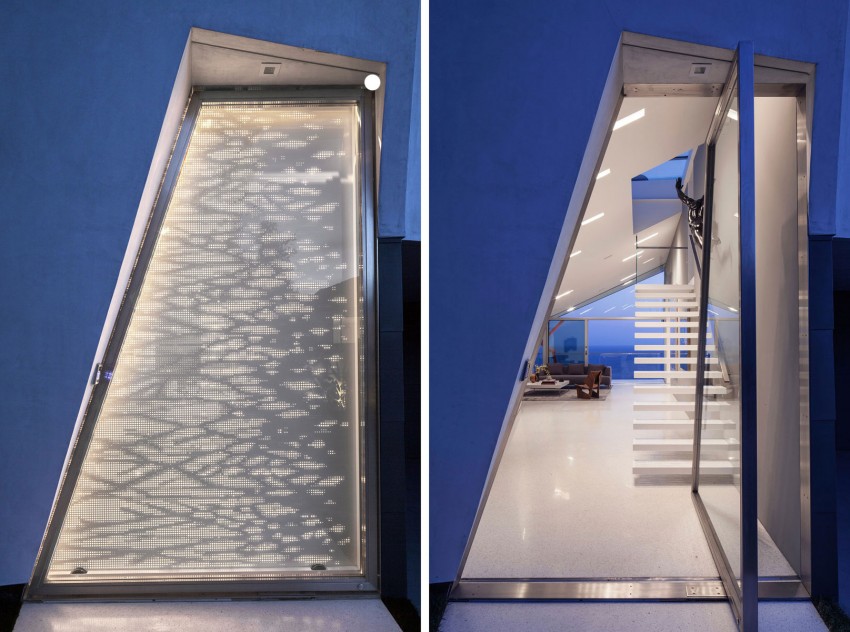 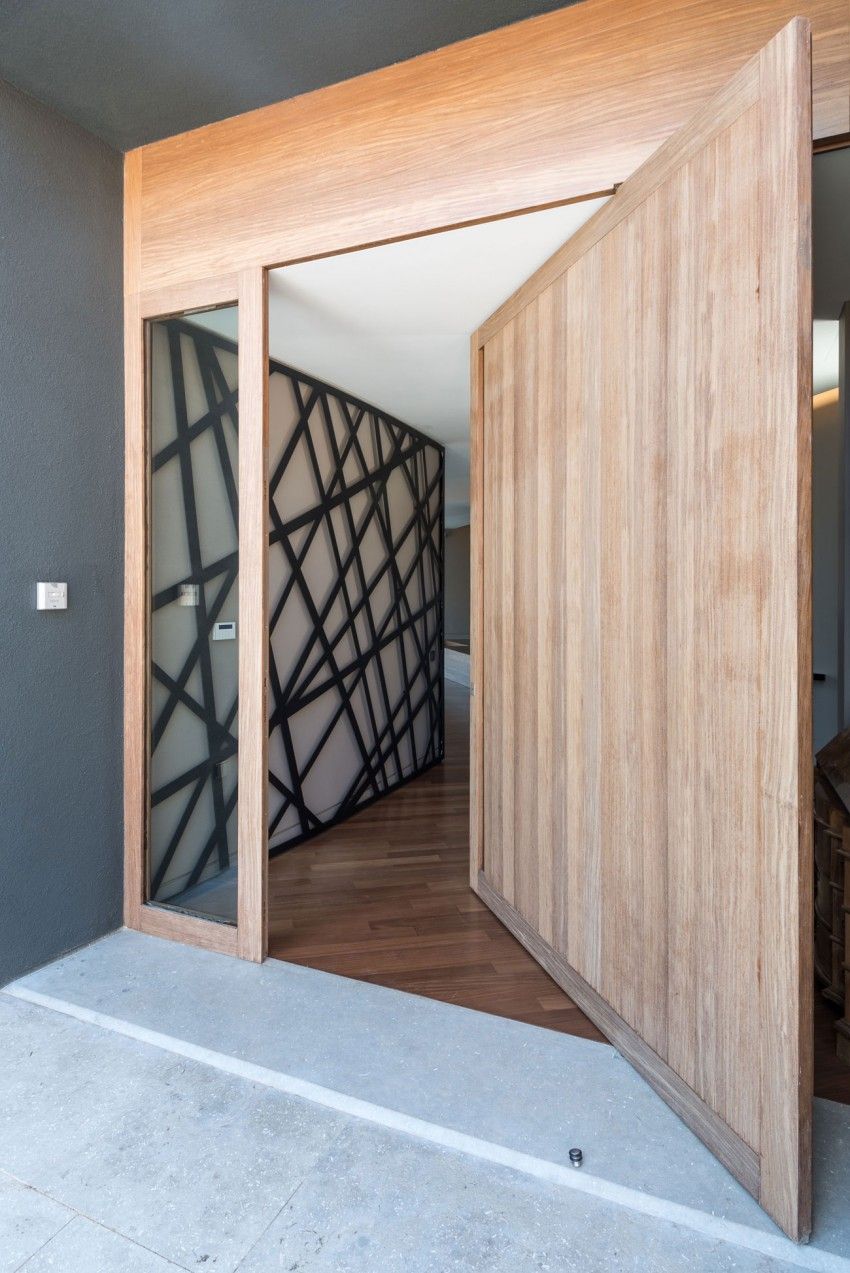 Pivot doors are definitely the way to go if you want a clean, modern and stylish look. They look exquisite wherever you put them and they take many different forms. Because size matters, today we’re going to have a look at a few large pivot doors. Some might even call these huge. They definitely make an impression and know how to stand out. Let’s see what makes them special, besides size.

A residence as impressive as the Edge House needs a stand-out front door to match its character. The site on which the house was built by Studio Omerta gives it a prominent look and the huge pivot door at the entrance was designed in accordance with the overall proportions of the residence. The door is made of solid wood with a transparent glass side panel.

Although not as large as the previous example, the pivot door designed for this hillside residence in Malibu has its own unique particularities that make it stand out. First of all, the irregular shape of the door is definitely worth mentioning. This gives it a futuristic and sculptural look. Then there’s also the angle at which it was installed. The door leads into the social area, faces the staircase and softly glows at night. The residence was a project by Patrick Tighe Architecture.

When designing the Lamble Residence, Smart Design Studio was careful to ensure a nice balance between solid and void surfaces. The upper floor has full-height glass walls and large terraces shaded by the cantilevered roof. The ground floor is clad in cedar and has timber louvers and a large pivot door with an opaque glass panel to its left. When closed, the door disappears into the facade. Its dimensions make that easy.

The pivot door featured by Studio-X Beijing looks really charming, its size not interfering with the fact that it looks like the entrance to a secret garden. The Studio was designed by O.P.E.N. Architecture and represents a transformed warehouse which now serves as a multifunctional space for exhibitions, conferences and educational facilities. We find this large pivot door to be a good representation of the building’s versatile nature.

There’s always strength in numbers and, even though this residence doesn’t have a single huge pivot door, it knows how to make the most of this feature. XTEN Architecture gave this house an entire wall of pivot doors. The doors are made of clear glass and have sleek black frames. Their role is to open the interior living spaces to the surroundings and to bring the outdoors in. Two other walls have sliding glass doors and this allows the ground floor to become completely open to the landscape.

Another house that was designed to engage the landscape and to immerse in the surroundings is the New Canaan Residence designed by Specht Architects in Connecticut. One of the features that connect the house to its surroundings is a large pivot glass door that looks just like a section of the facade. This type of door was chosen for its ability to seamlessly blend in.

Two huge glass pivot doors open the facade of the Town House in Antwerp to the courtyard and they are indeed impressive. Unlike other doors, these two and two-storey high. They were made this big in order to offer uninterrupted views from the ground floor and loft space and also for the striking visual impact they have. The upper level features a panorama window from one side of the building to the other. To be fair, the house is really narrow. This was a project by Sculp[IT].

The large pivot door featured by Casa 4 Planos in Mexico reveals once again how such a well-though feature can contribute to a design that seamlessly blends indoor and outdoor spaces. Not only that this door offers panoramic views of the exterior but its size gives it a solid look while also making it seamlessly integrate into the décor. The glass allows the door to look lightweight and delicate no matter how big it is. This gorgeous residence was designed by Dear Architects.

Beautifully named Butterfly House because of its angled roof and symmetrical design, the residence designed by Feldman Architecture in California is surrounded by hills and stunning views. Its glass facade brings it closer to the surrounding landscape and reveals and panoramic views. A pivot door leads inside. It offers access to the staircase and the main social space and offers a glimpse at the exterior without directly exposing the interior.

Simply replacing a regular front door with a large pivot door is not always enough to make a striking first impression. The Mews 2 project by Andy Martin Architects shows the importance of the whole ensemble. A very large glass pivot door offers access inside, leading into a spacious hallway decorated with a magnificent mosaic feature wall.

The main goal when designing the Mercer Island Residence was to open the house to the outside and to make it open and airy. Stuart Silk Architects used a variety of methods to make that happen. They gave the house a pivot front door which, even though is solid and heavy, has a design that makes it look lightweight and sleek.

Pivot doors are known to make a more dramatic and modern statement than other more common types. One of the advantages they present is the fact that they can be larger than regular doors and can be made of materials usually too heavy to be used for swing doors. Not even a pivot door as large as the one featured by the CG House is too heavy to be functional. Apart from that, GLR Arquitectos also took advantage of this system to make the door disappear into the facade.

Because pivot doors are usually custom-made, they can be designed to perfectly match the facade and to become a part of it when closed. They can also be designed with custom dimensions. But whatever the case is, we can all agree that pivot doors are an excellent choice if you want to make a strong first impression.

Pivot doors can feature variations in terms of functionality. They can pivot at the center or can have an asymmetrical system that lets them open up more on one side. Such an idea is useful if the door is not particularly large and you want to make it as functional as possible without having to switch to a different type of door. A great example in this case is the house designed by Johnston Architects in Washington.