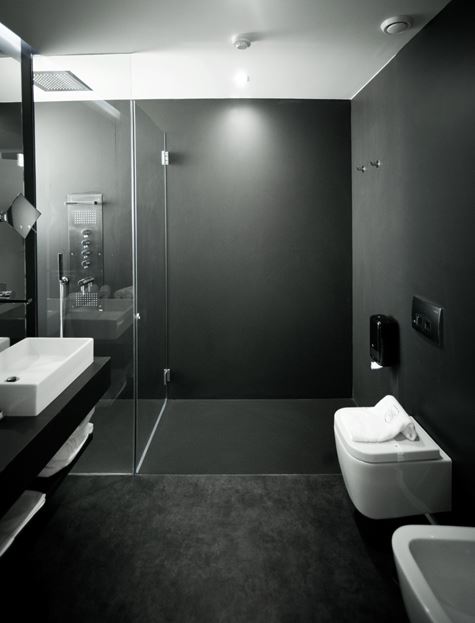 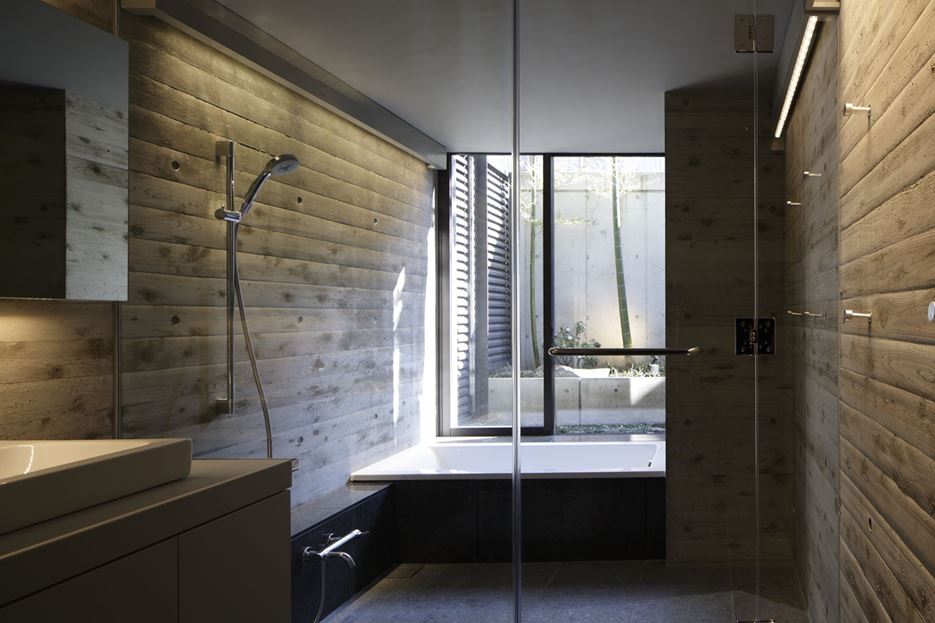 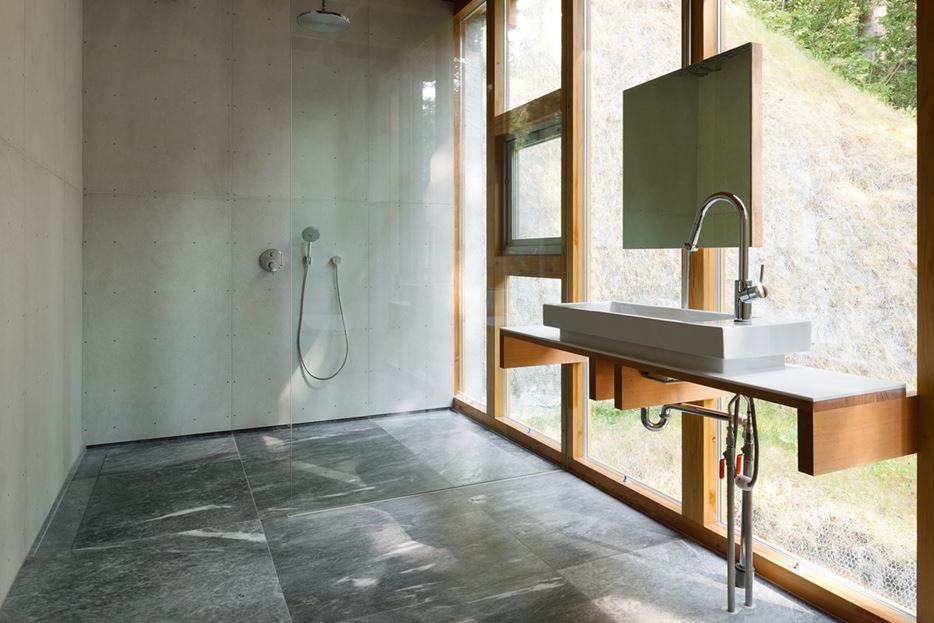 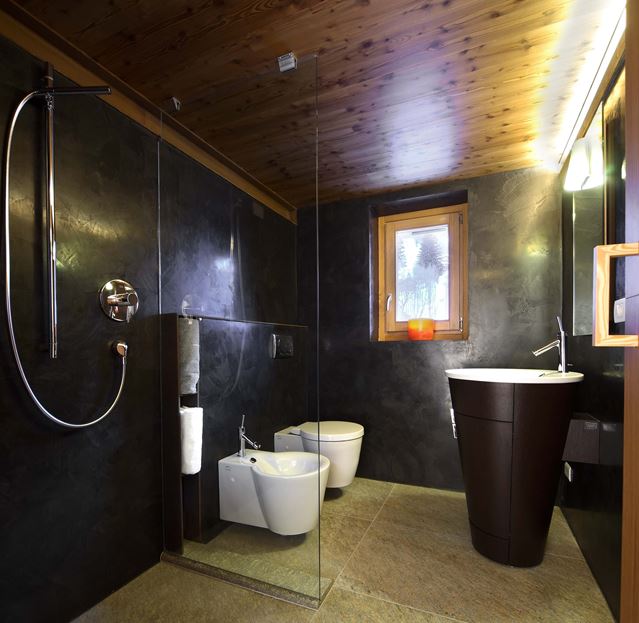 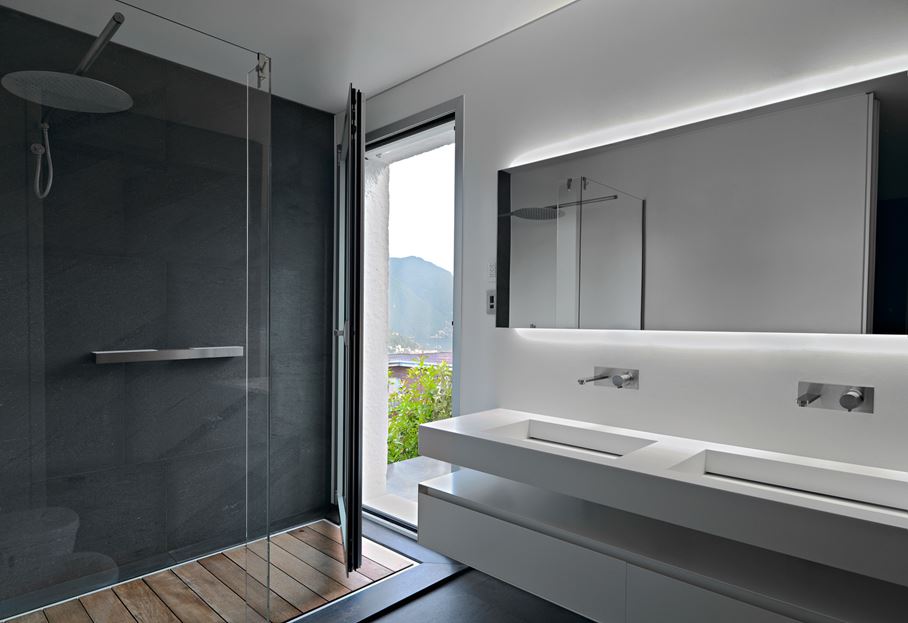 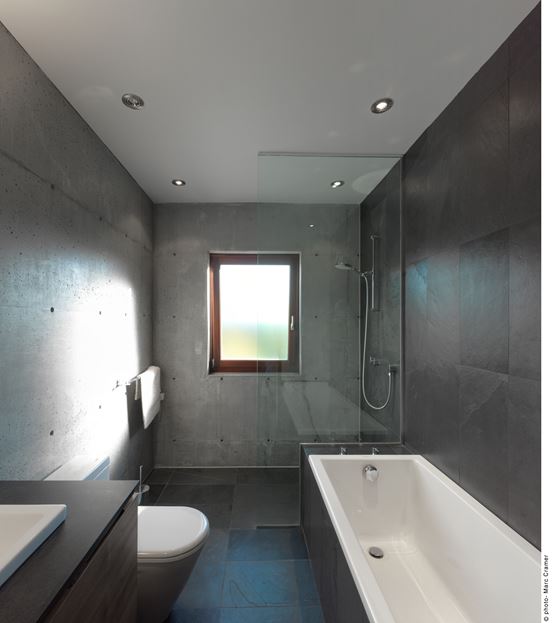 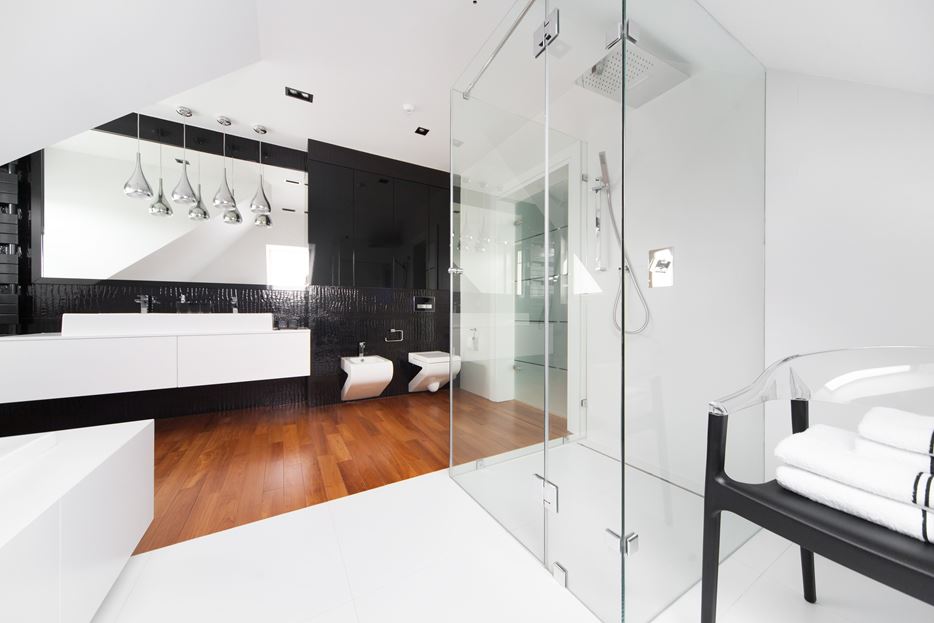 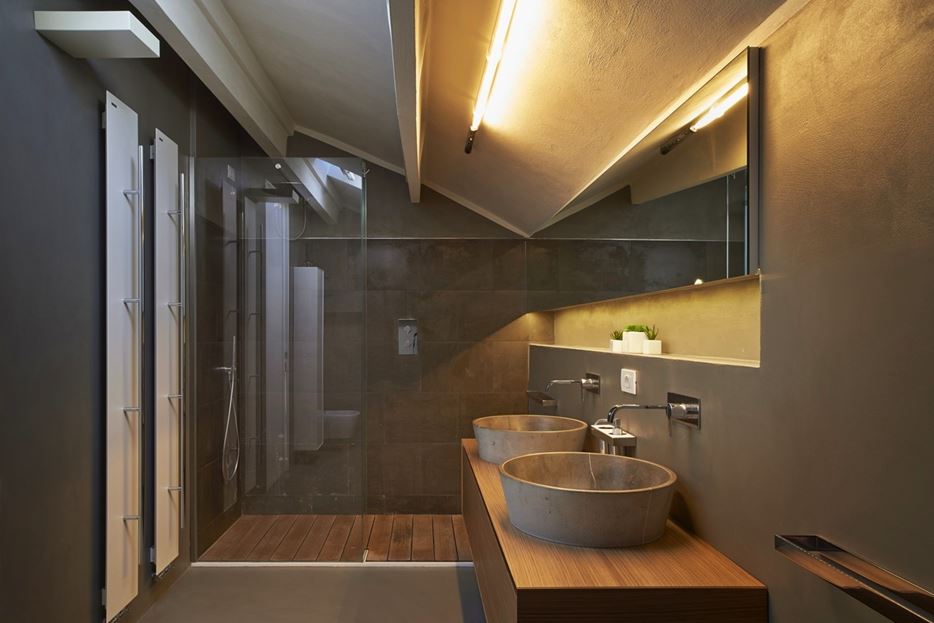 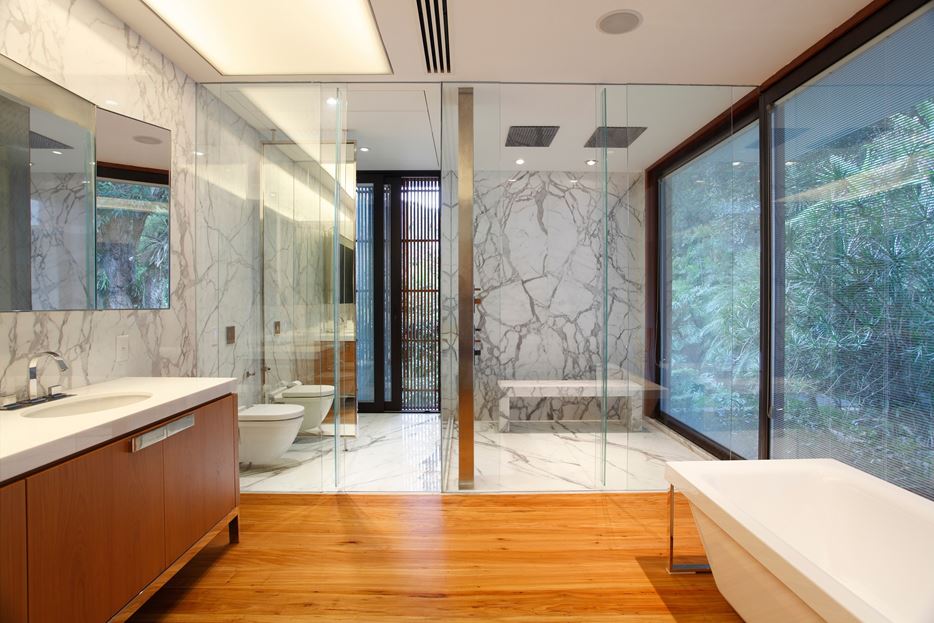 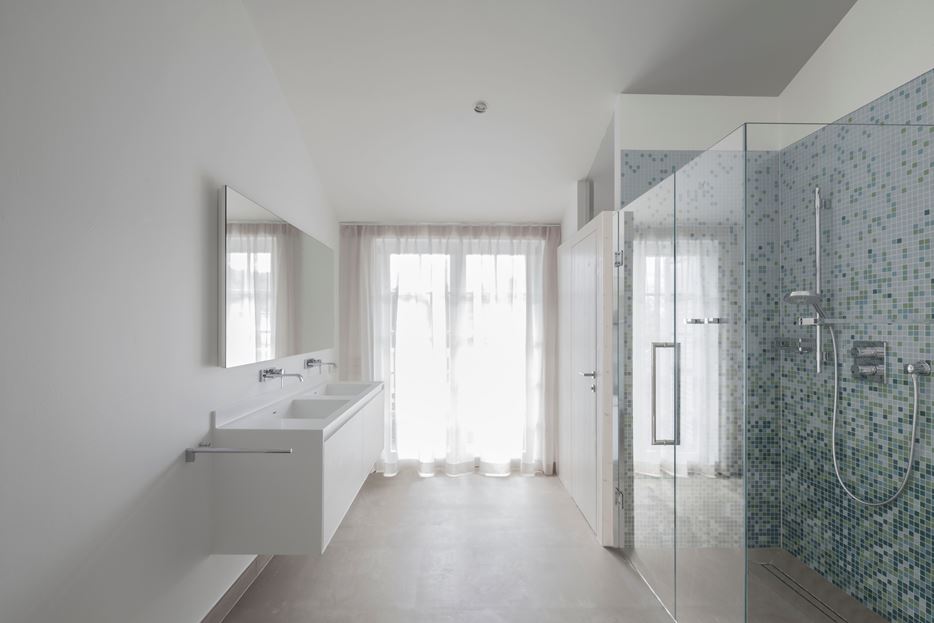 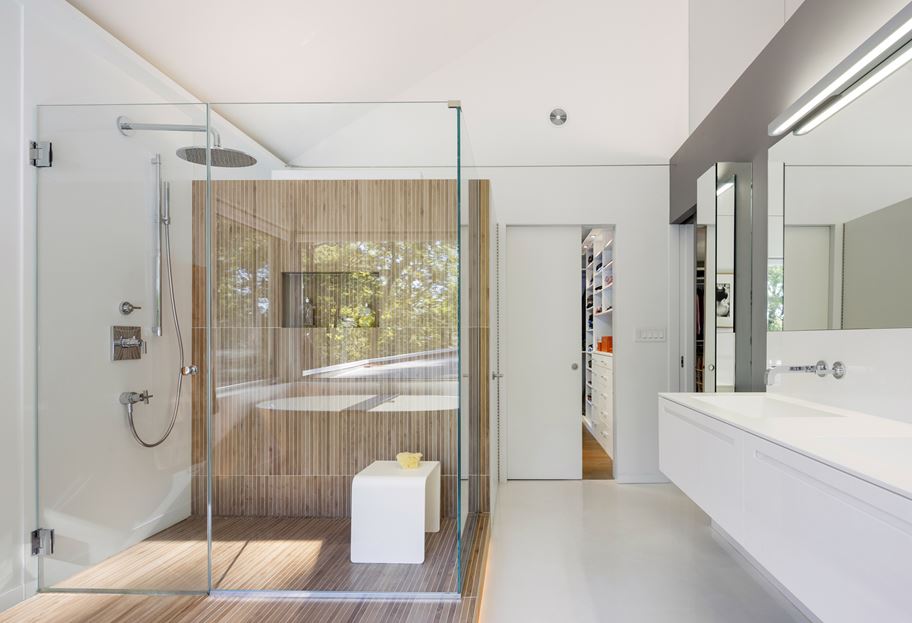 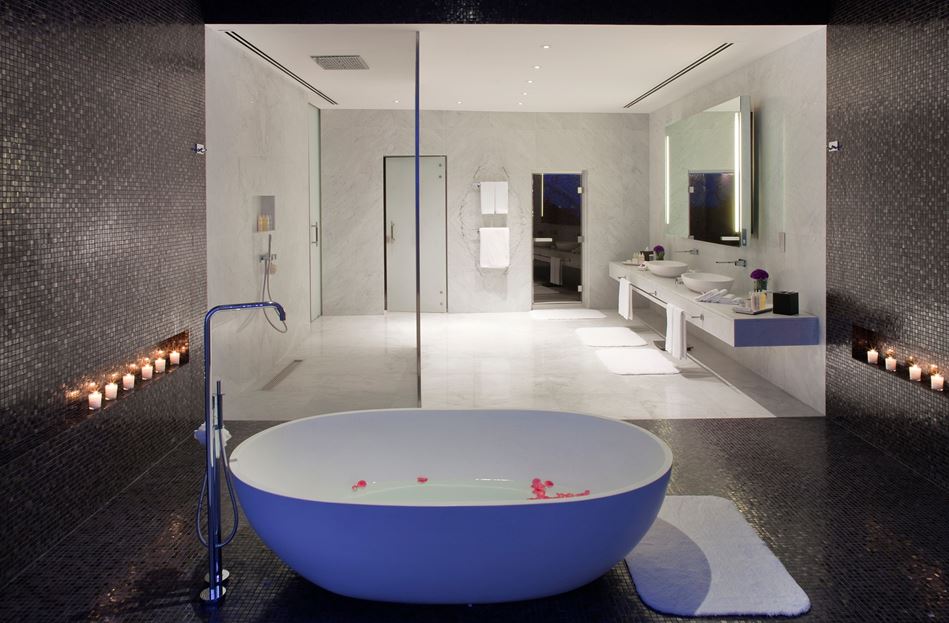 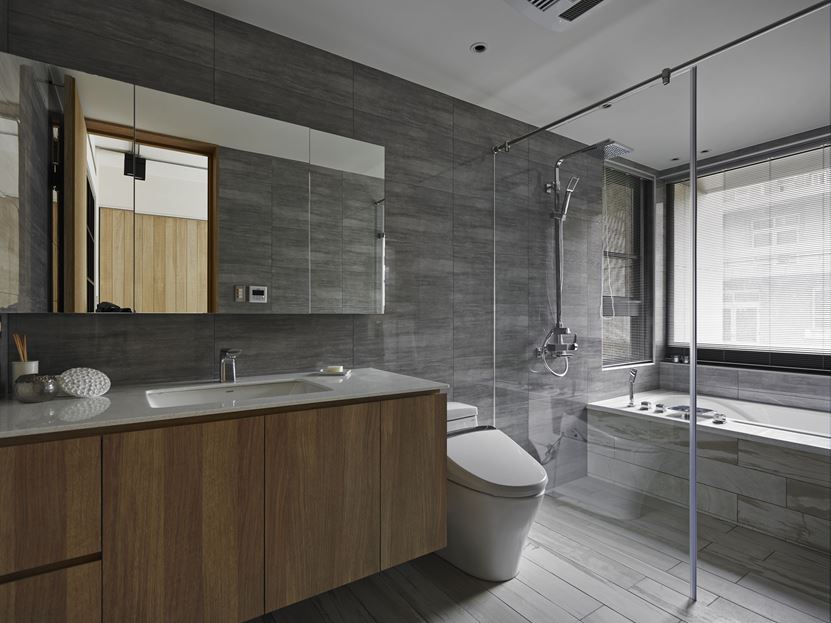 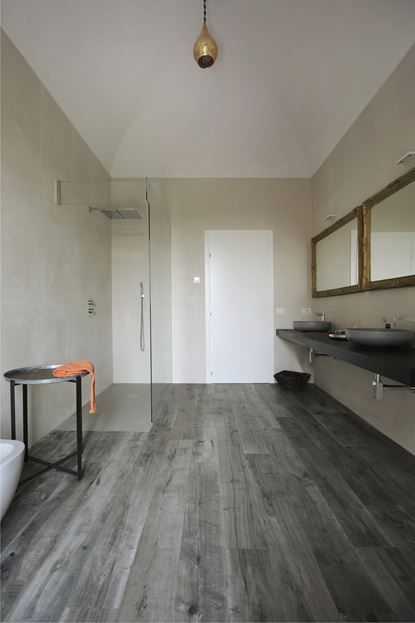 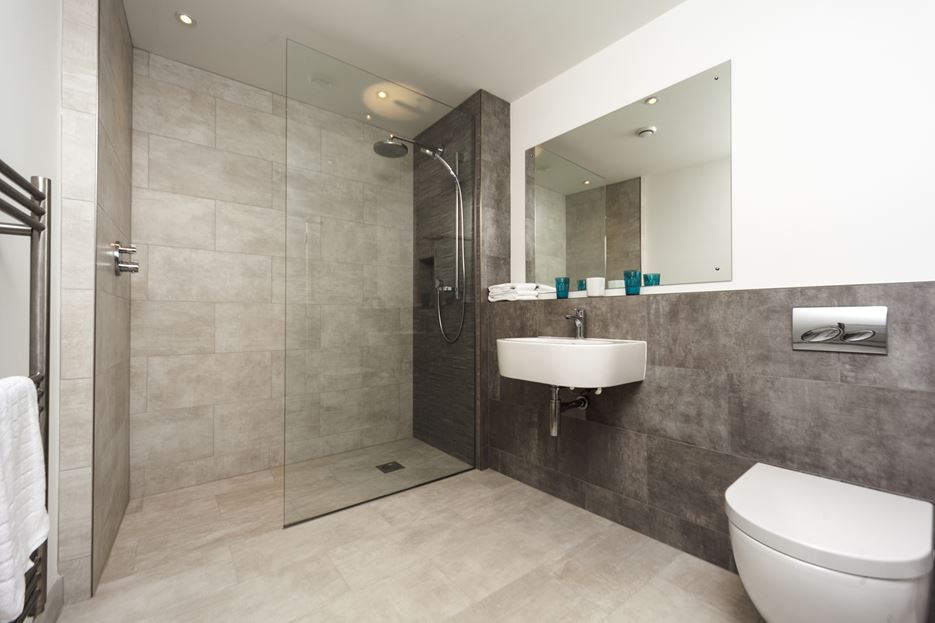 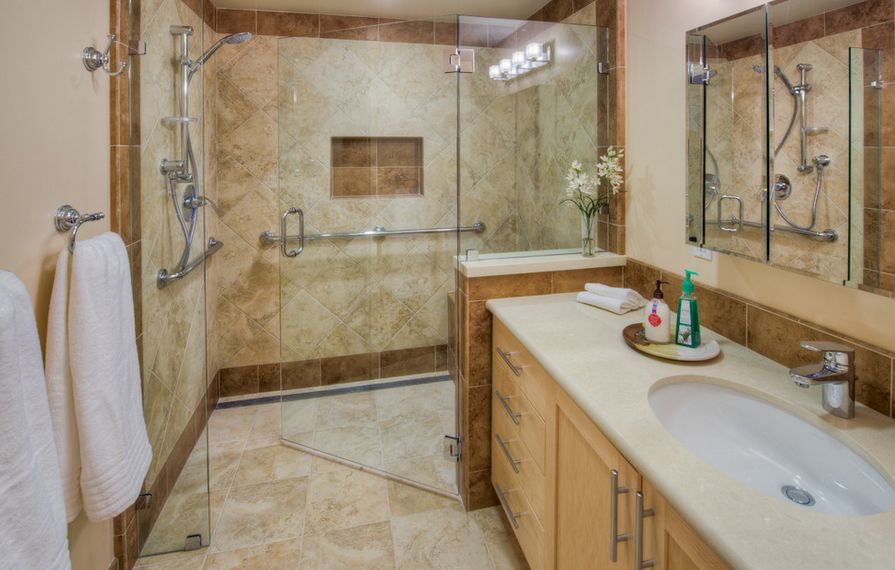 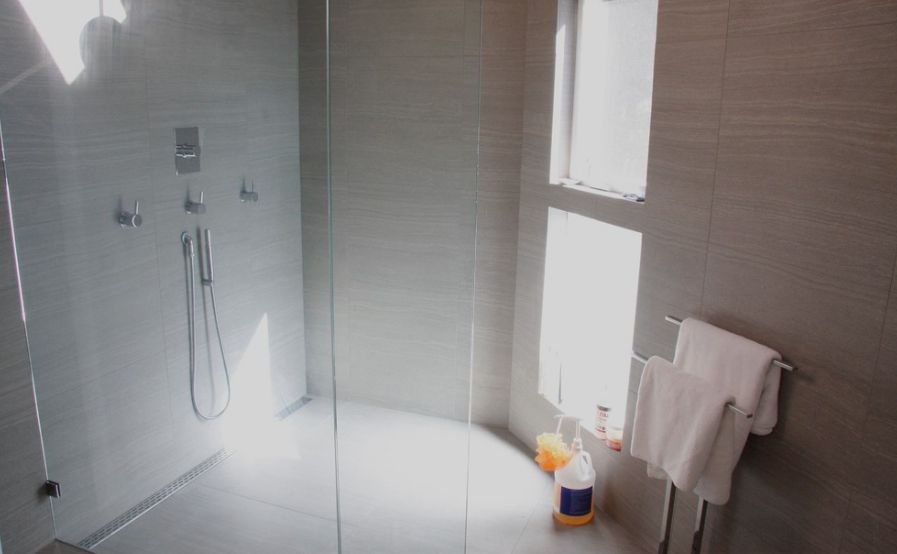 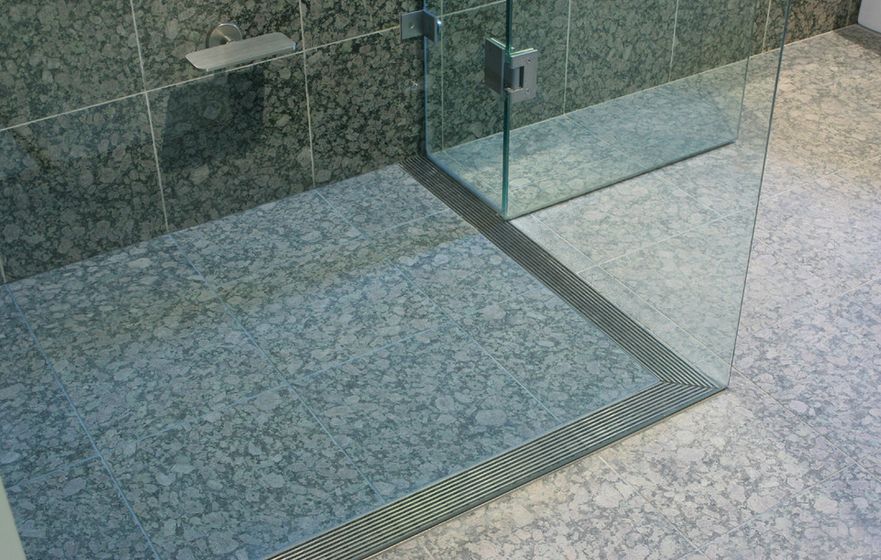 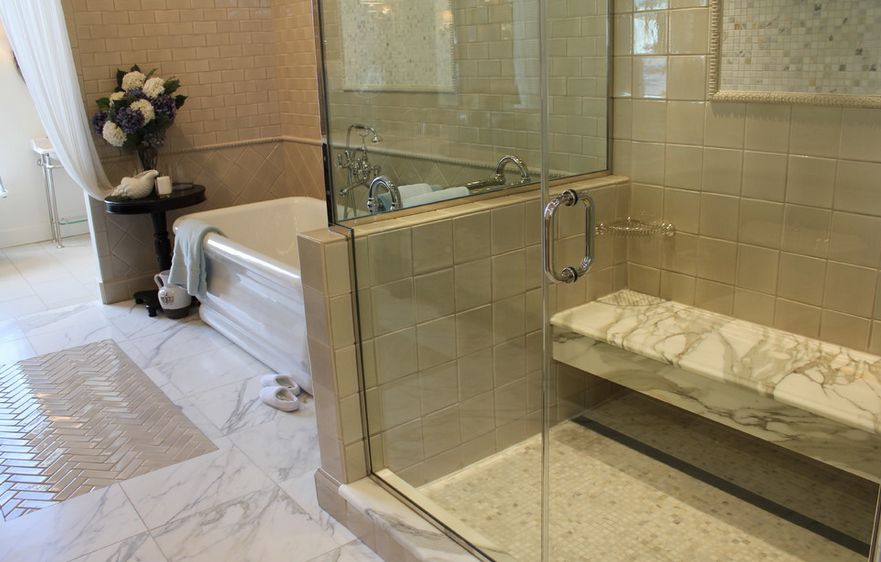 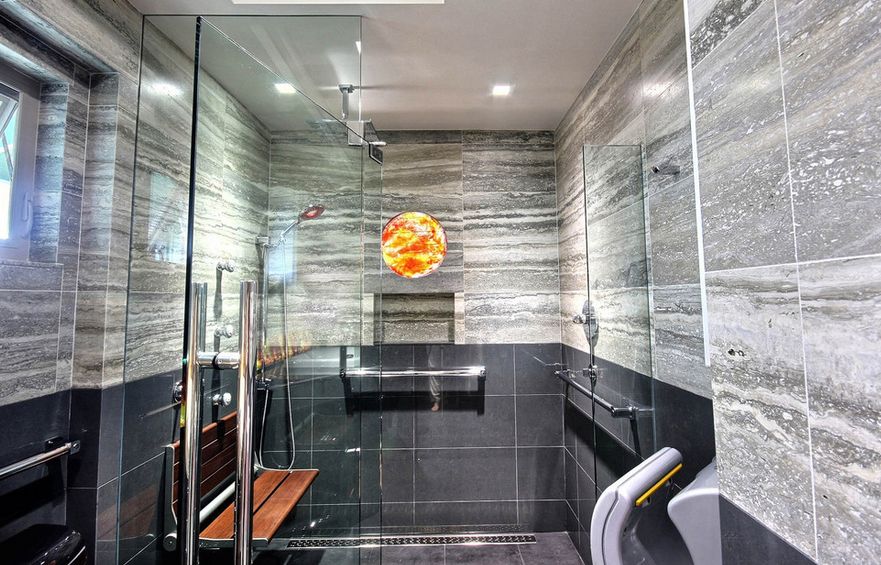 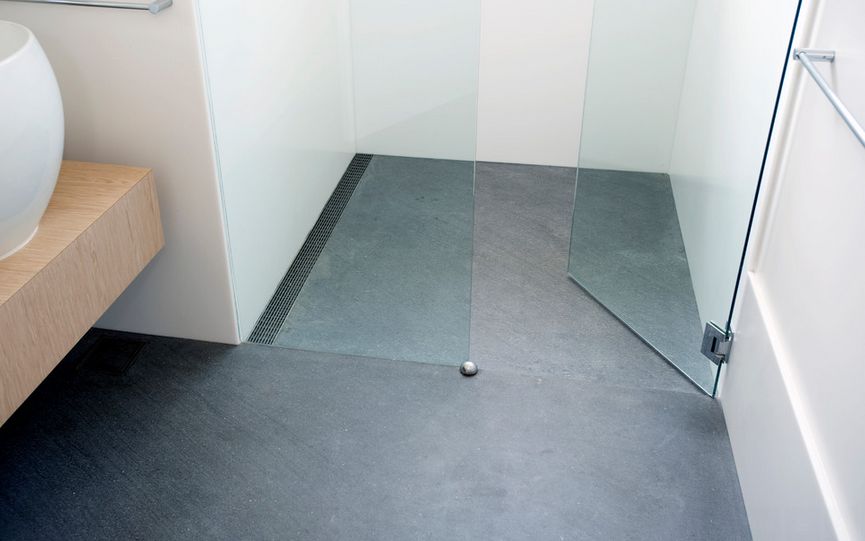 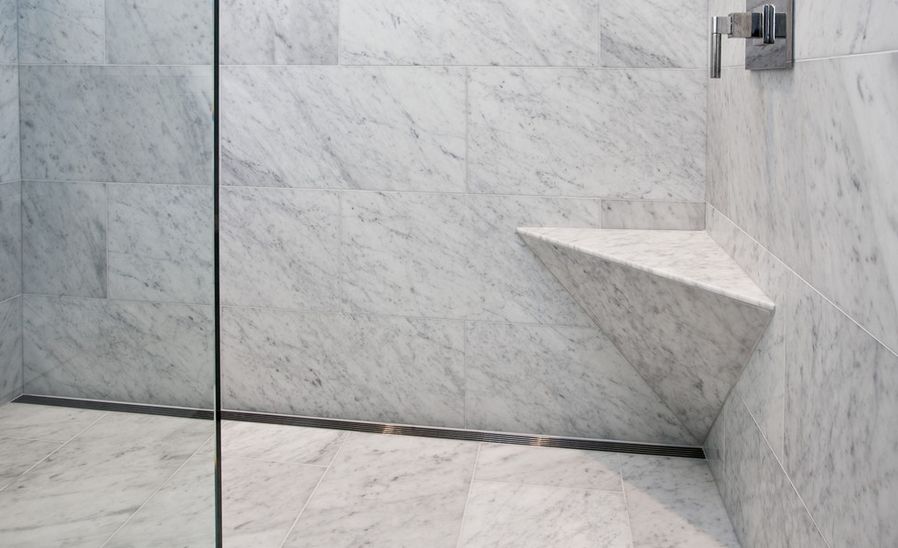 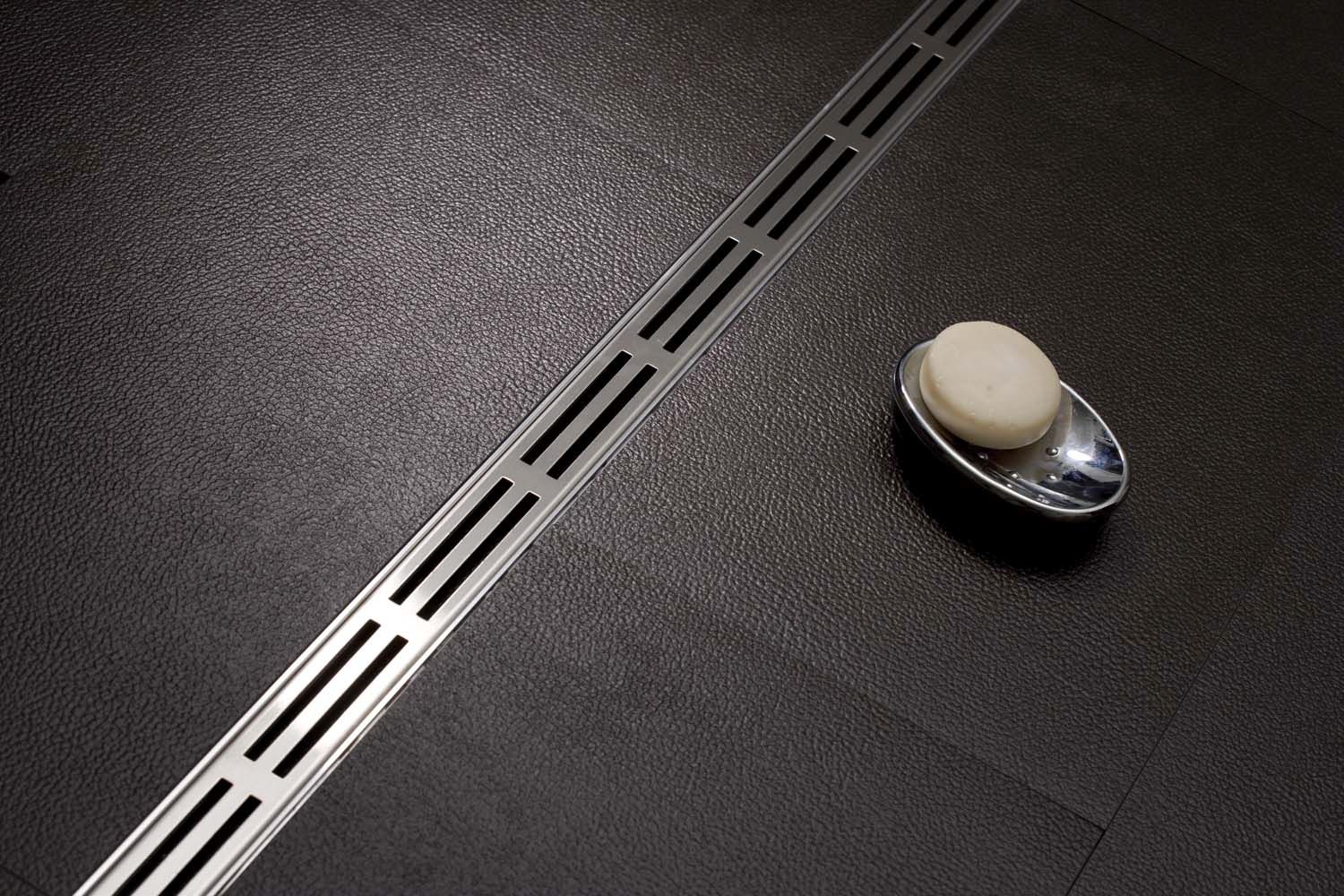 What may seem as a very simple task at first can turn out to be a complex project so don’t judge a book by its cover or a walk-in shower by its simplicity. Modern showers tend to simplify everything and to aim for a really linear and fluent design. They often hide features such as the drains or the pipes in order to be more practical and aesthetically pleasing. Glass is a favorite option for shower enclosures, keeping the décor simple and sleek.

The shower drain, although it may seem like a very important feature, can pose problems for a modern makeover or remodel. That’s because modern showers are simple and minimalist by definition and the drain just doesn’t fit the style. But there are solutions. Infinity Drain introduced some really great systems designed to conceal the drain and make it seem less like an eyesore and more like a stylish feature.

Linear drains are among the most popular with modern showers. When installing them, it’s important to consider the path the water takes to the drain and to also install the tiled accordingly.{found on quickdrainusa}.

It’s easy to conceal a channel drain. It can be a mere accent element when placed along one of the walls and it can highlight the simple, straight and clean lines used throughout.{found on creativekitchensbaths}.

And if the drain is similar in color to the flooring, then it stands out even less. The shower stays simple and with a fresh, uninterrupted design. The linear drain is even difficult to spot in this case, the grain slab floor concealing it pretty good.{found on infinitydrain}.

Another possibility is to coordinate the linear drain to other accent elements in the bathroom or shower enclosure. If it’s a chromed drain, it can match the towel rod and the shower fixture.

Or you can hide the drain underneath a shower bench. It will stand out only as a shadow, without actually influencing the décor much. Also, under there it would also catch all the water that wants to escape.

There are several places where a linear shower drain would be most effective, depending on the design and layout of the bathroom, the size of the shower and the other elements included there. For example, the drain stops the water from getting outside the shower area and into the other portion of the bathroom, beyond the glass partition.

You can consider the linear drain a barrier between the wet room and the rest of the bathroom where the sink is situated for example. Sure, the doors and partitions have their role too but it’s the drain that coordinates everything.{found on montreallesbains}.

Linear drains are just as versatile as any other type, if not even more thanks to their simple design and appeal. They’re ideal for curbless showers and make it easier to maintain an overall simple look and cohesive design.{found on kevinschrier}.

And they’re not only suitable for minimalist bathrooms with clean, white interiors and sharp contrasts. A linear drain could look just as beautiful in a more classic environment such as this one.{found on houseworksinc}.

Glass is a very versatile and surprisingly strong and durable material despite its fragile look. It’s ideal for elements such as the walls of a walk-in shower because they allow the room to stay airy and spacious as a whole without creating solid partitions.

The shower area can occupy the rear portion of the bathroom, in which case a glass wall or door would allow the whole space to function as a whole. In order to maintain a continuous and cohesive design, avoid highlight the shower by using different colors, textures or materials.{found on laurenceassociates}.

A corner shower can go almost unnoticed if it’s enclosed by minimalist glass partitions. This way an unobstructed view of the entire room can be enjoyed from every corner and the décor stays airy, fresh and elegant.{found on sebastianoamore}.

It’s possible to integrate the tub into the shower area. A tub and shower combo is a popular option in the case of small bathrooms but other variations can be adapted to more spacious rooms. A glass partition between this area and the rest of the room will contain the water and moisture.{found on aworkdesign}.

This luxurious bathroom features a separate nook at the end of the room reserved for the tub. Small wall niches decorated with candles and the dark color used for the walls, floor and ceiling create a sophisticate and intimate ambiance. The rest of the room is divided into two zones by a glass partition.{found on jesticowhiles}.

Another feature which can help keep the bathroom interior design simple and practical is a shower niche. The niche is built into the wall and offers storage for necessities such as shampoo, conditioner, lotion and other things, eliminating the need for additional furniture.{found on fougeron}.

Sometimes it’s ok to highlight the shower by using different colors and materials in this particular area of the bathroom. Such a combination can work when the rest of the décor is plain and neutral such as in this case.{found on destilat}.

It can be useful, when space is not limited, to divide the bathroom into distinct areas. For example, the toilet and the shower can be two distinct zones separated by glass partitions from the rest of the bathroom.{found on giseletaranto}.

Consider conveniently placing a towel warmer close to the shower area for increased comfort and functionality. Some designs such as the Teso towel warmer feature sleek and elegant designs which fit perfectly in modern and contemporary bathrooms.{found on Victor Vasilev}.

The shower stall doesn’t necessarily need to occupy the corner or the end of the bathroom. It can have a central position, next to the tub or in between the toilet and the sink. Of course, there’s a lot more flexibility when the bathroom has a large floor plan.{found on widawscy}.

A small bathroom can feel more spacious if you choose to keep the interior design as simple as possible. Don’t combine more than two colors and use materials such as glass for the shower partition without influencing the rest of the décor in any way.{found on cleinge}.

The glass enclosure of a walk-in shower can take the form of a single panel of glass placed between the shower and another element such as the toilet or the sink in order to contain the water. A well-placed drain can take care of the rest.{found on studiofanetti}.

The best thing about full glass shower enclosures or partitions is that they don’t influence the rest of the décor in any way. Of course, this applies to transparent glass. If you want to add more privacy to the shower area you can use frosted glass.{found on schemata}.

Sometimes using glass is a good option if you try to maintain a simplistic look and to balance out other materials such as wood, marble or tile. The glass allows these to fully shine and stand out.

Minimalism can take many forms and transparent glass is able to adapt to a large variety of cases. Its versatility makes it an ideal choice for shower enclosures and strong colors such as the dark gray featured here.