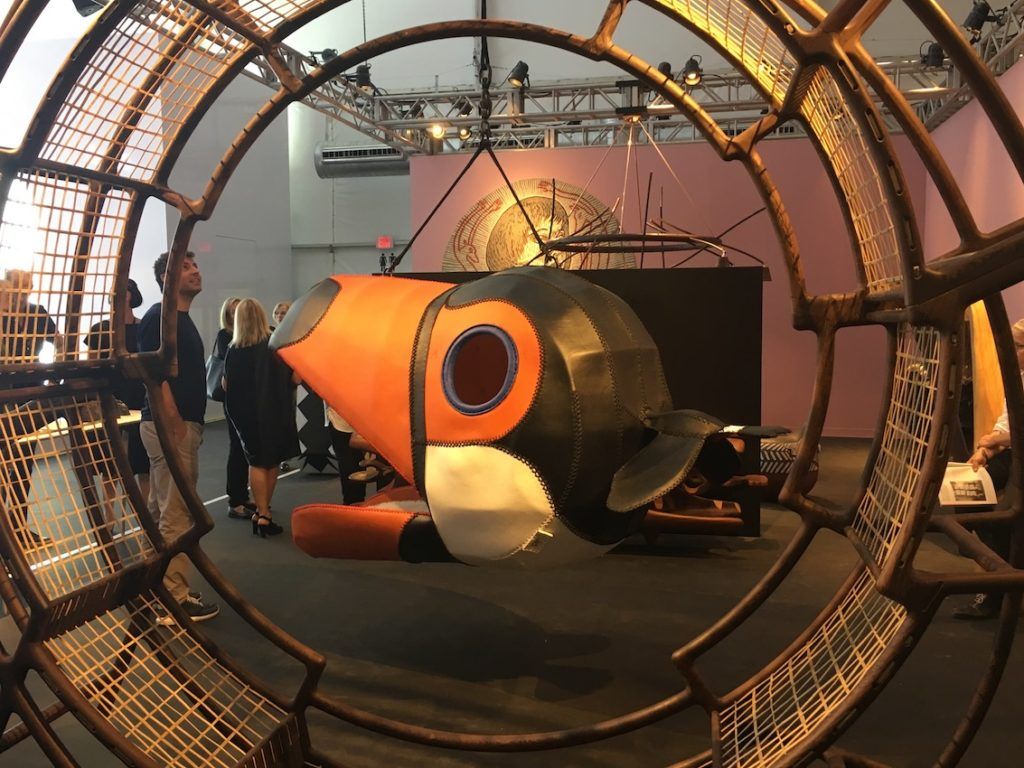 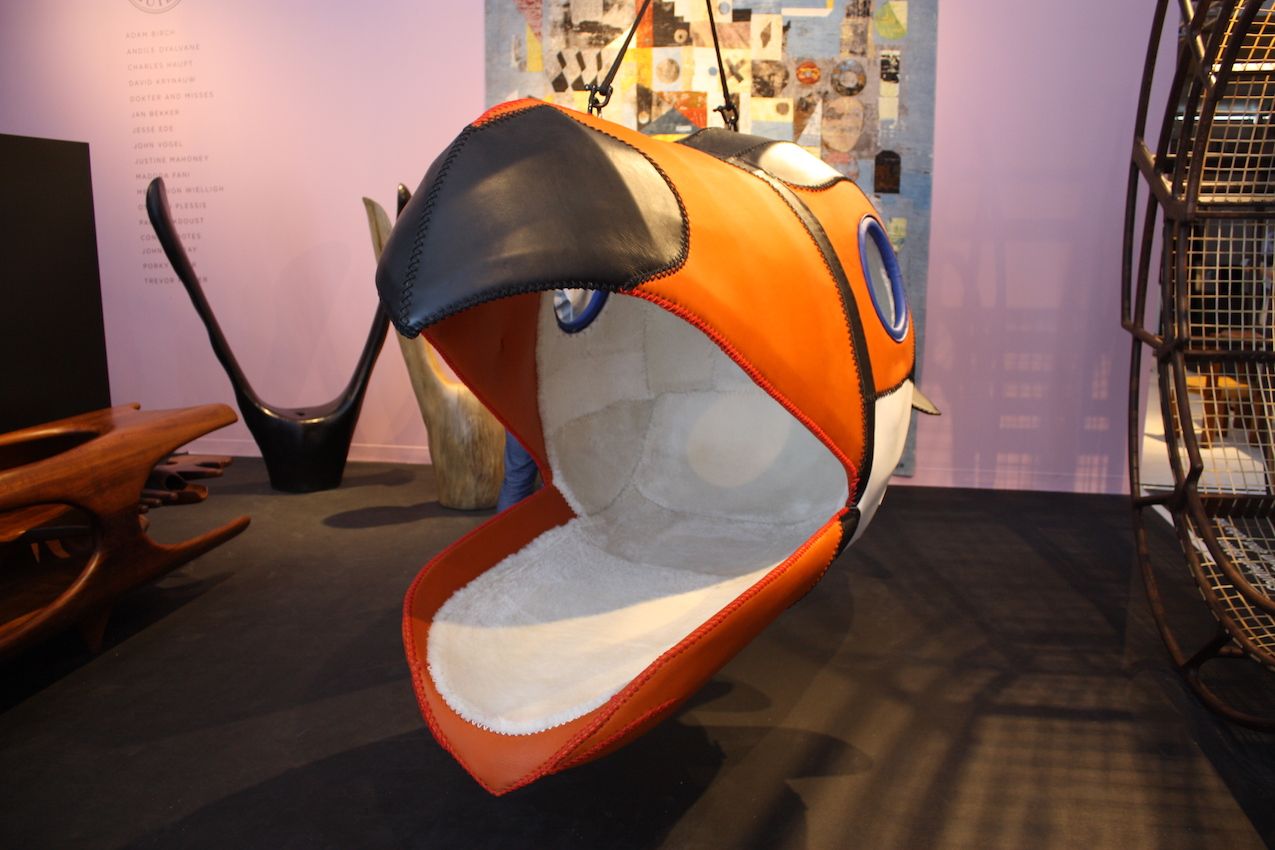 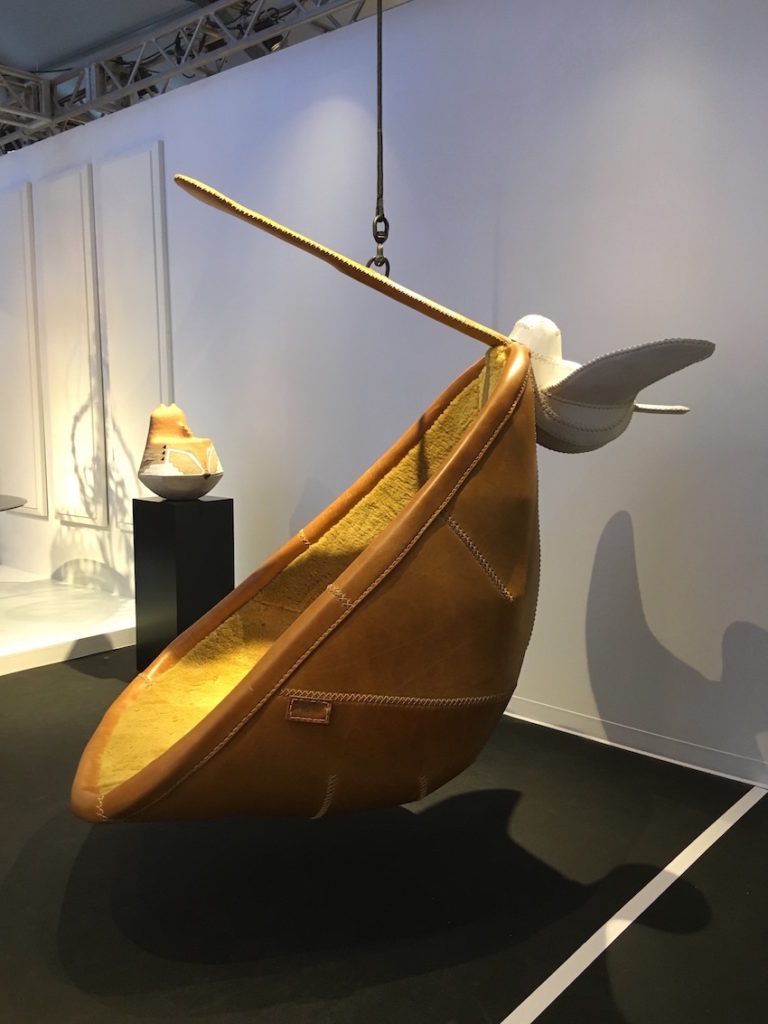 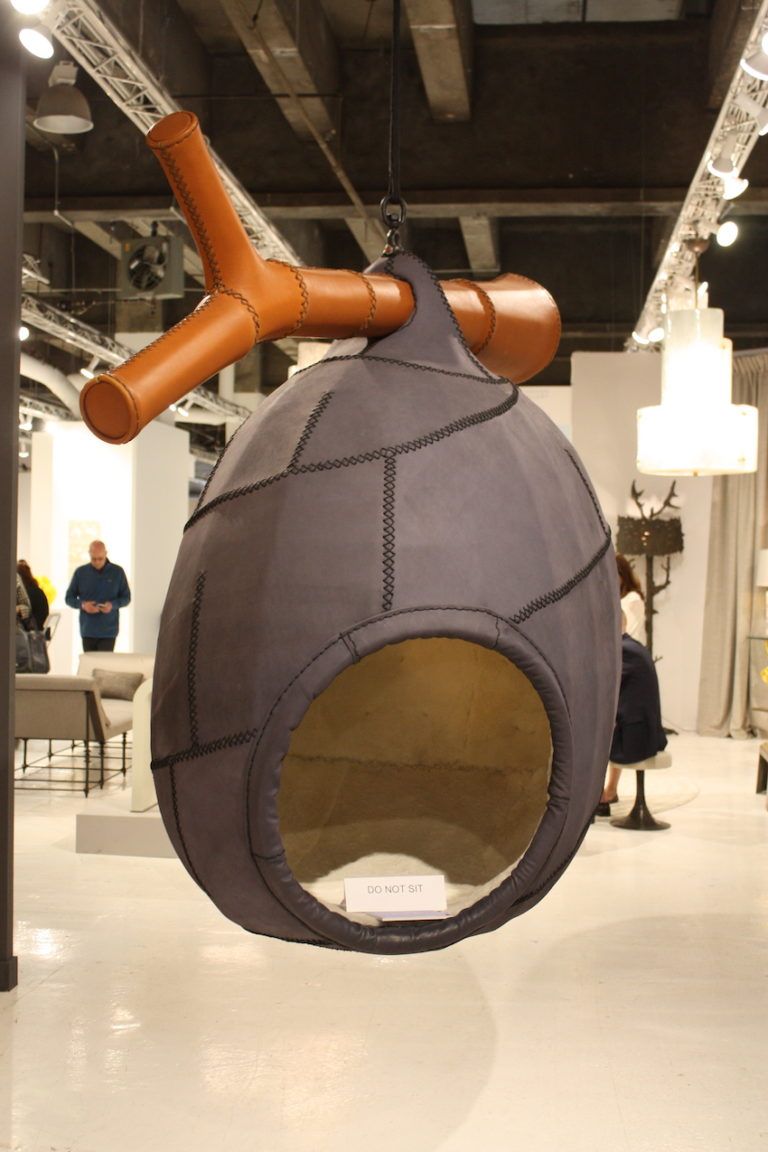 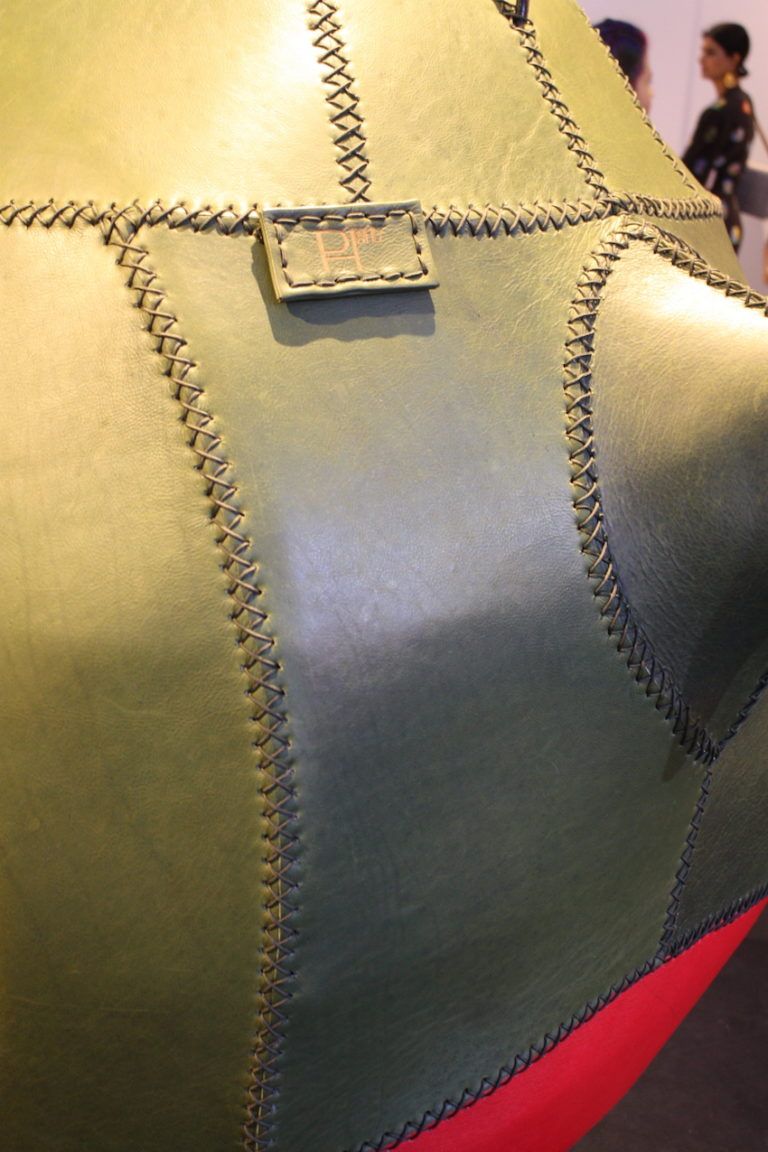 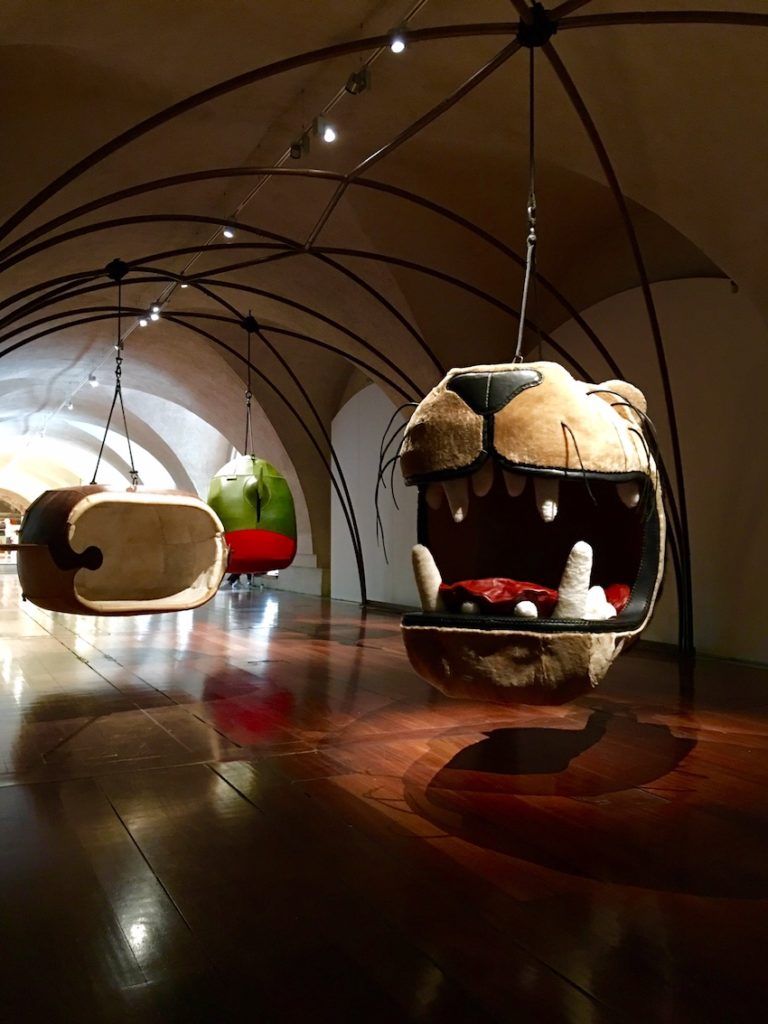 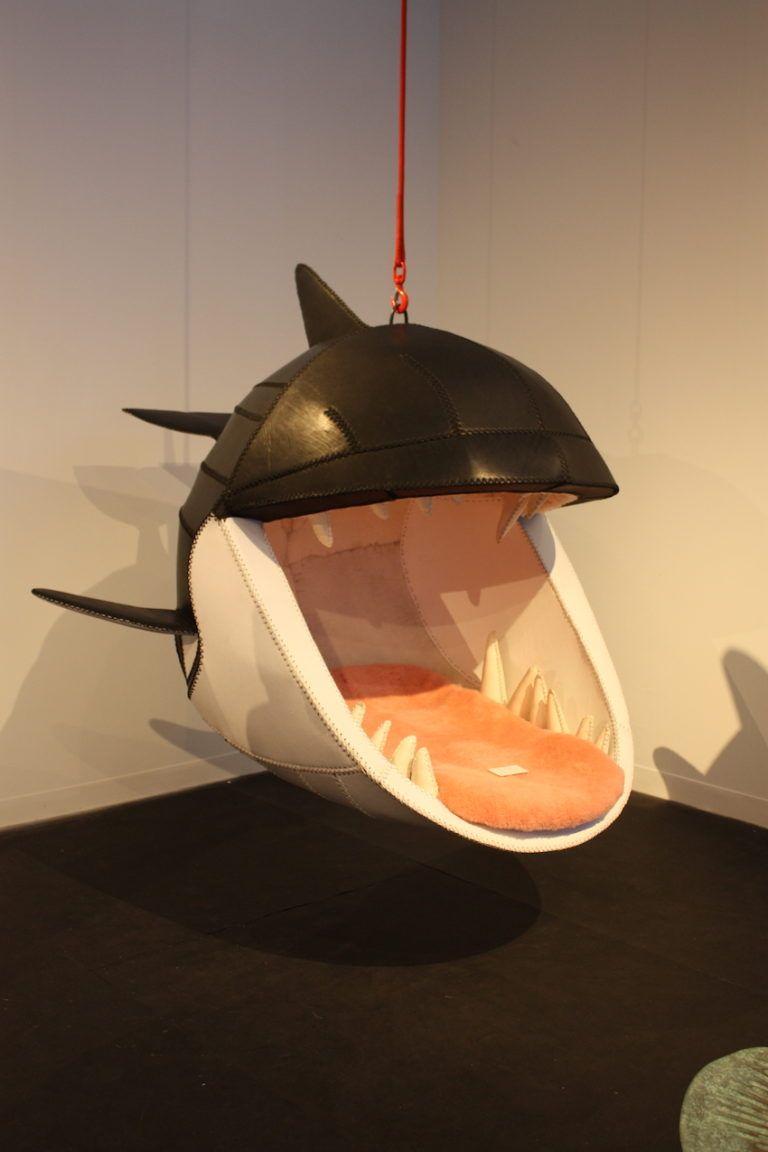 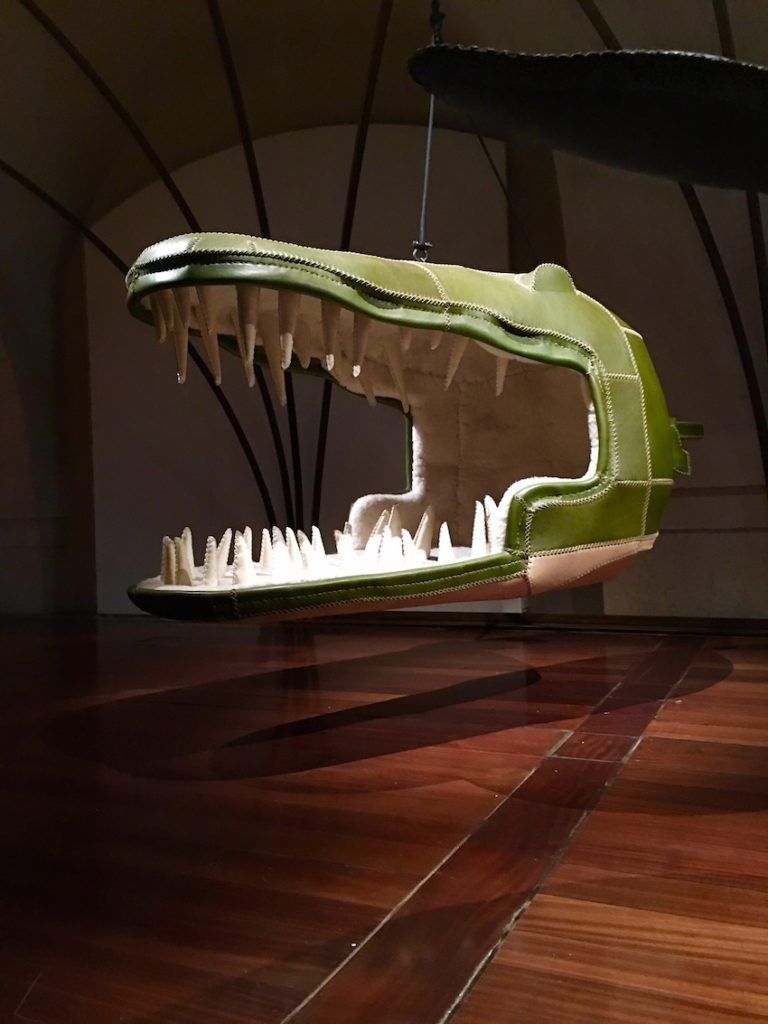 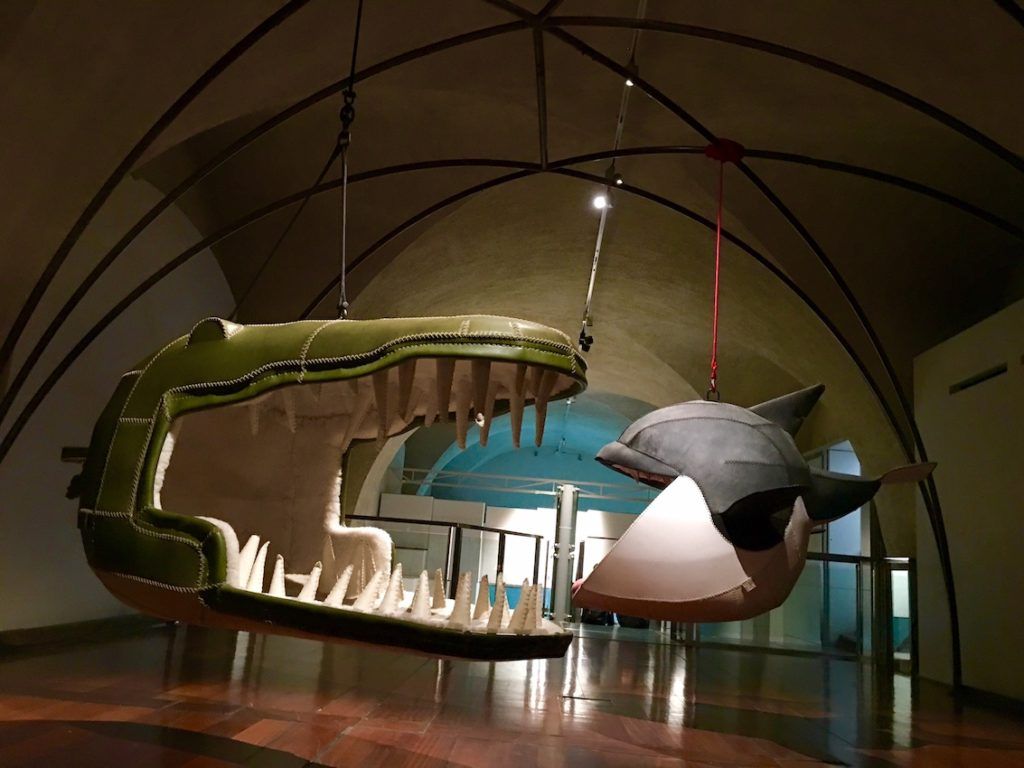 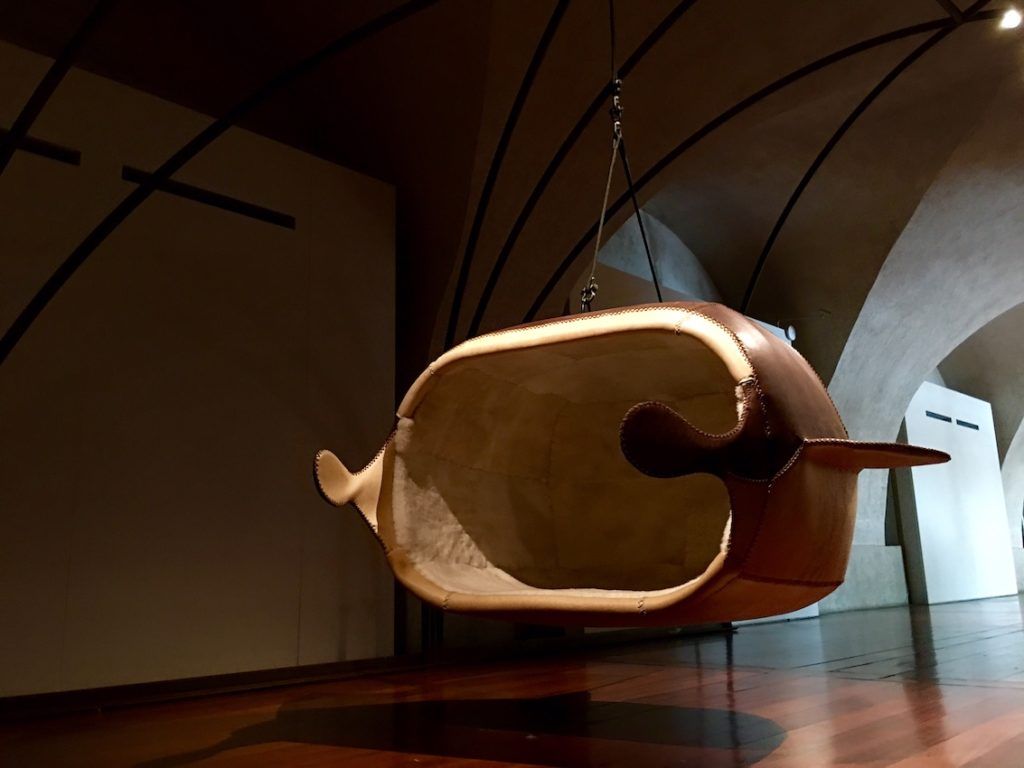 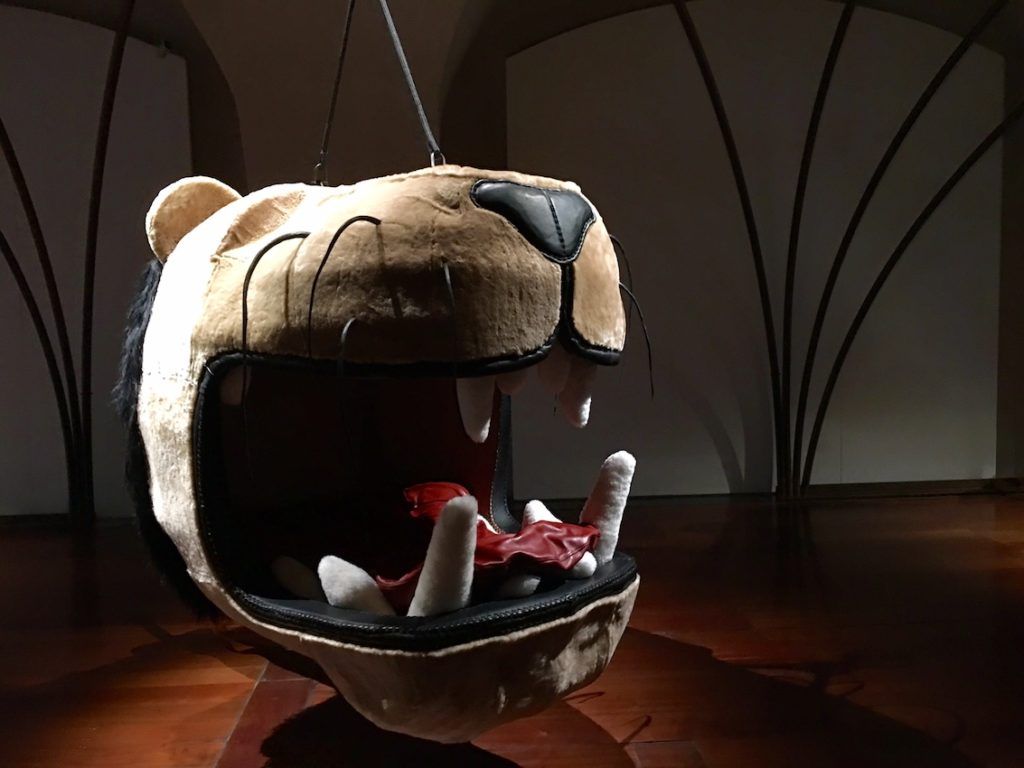 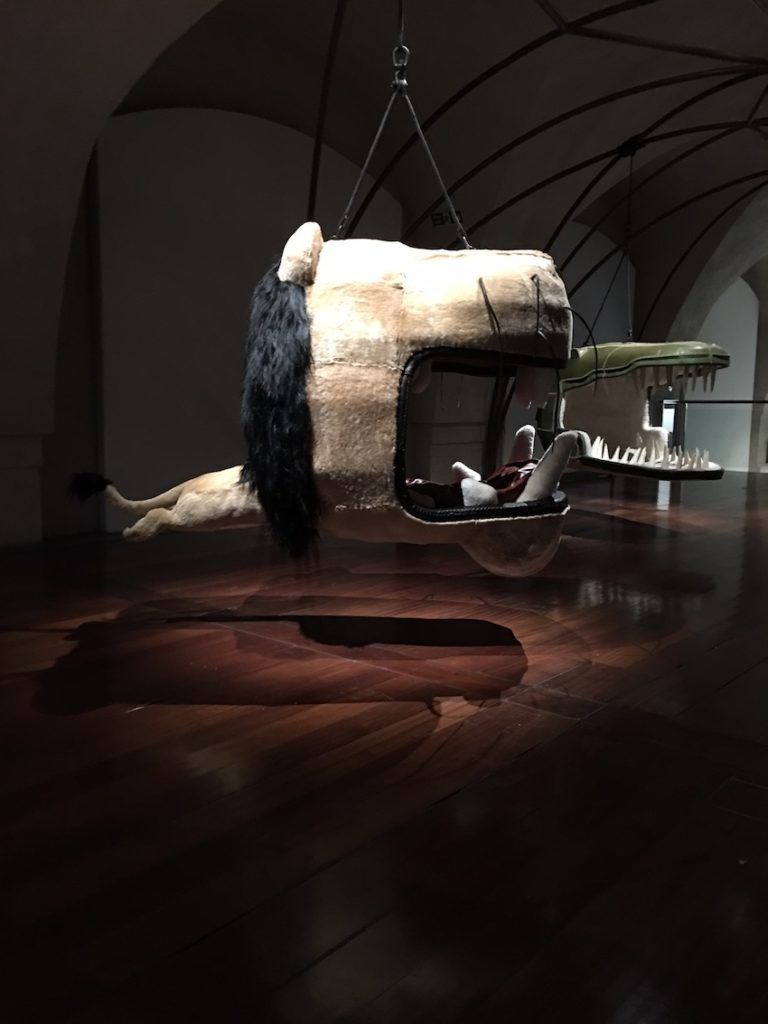 They’re quirky and cozy, but the whimsical air of works by artist Porky Hefer belies the deeper meaning of the hanging seats he creates. From animal shapes to ovate seats woven from various materials, the “nests” that the South African artist designs are definitely conversation pieces. The materials he uses, the craftspeople who contribute their skills and the underlying inspiration make these more than simple hanging seats.

The animalistic designs he shows pull at your attention from across the design show floor, and not just because of their form and size. Catching a glimpse of the oversized head piques curiosity to see more; to see what’s inside that gaping mouth. Once you approach, the cozy, fur-lined interior looks so comfortable you have to fight an overwhelming urge to crawl inside and view the world from the interior perspective.

Represented in the United States by R & Company (and by the Southern Guild in South Africa) Hefer has recently gained much attention with his works at major design events like the London Design Biennale and Design Miami. His creative work started with woven nests, inspired by the indigenous weaver bird, which is known for its skill in crafting nests from whatever materials it can find. Hefer also used discarded materials that he could find. He has created works using kubu cane as well as used tires, leather, steel and raffia. His pieces celebrate the indigenous materials and crafting skills of Africa, which have proven to be fuel for his amazing human-sized creations.

Pelicanus Iris looks more benign than some of Hefer’s toothier models, and the ample lower beak of the bird forms a cocoon fit for lounging. Perhaps the old fable about storks and babies fuels human desire to want to curl up inside this seat. His creations initially have the light air of something perhaps designed for a child, but end up bringing out the child still hiding inside adults — the child who wants to be swinging in that seat.

In his collaborations, Hefer also focuses on the amazing skills found in his home territory. Training with master weaver Ismael Bey led Hefer to the Cape Town Society for the Blind, where Bey had also trained weavers. Collaborating with the society and Woodheads, a local leather company that has a 150-year history, Hefer brings his nests to life using leather offcuts and the native source of skills. No matter what form his work takes, it is part of an ever-growing artistic movement celebrating individualistic hand-crafted pieces as an antidote to today’s mass production. The mastery of different materials and the high level of workmanship is evident in the details on all his chairs. For example, mere stitching between the sections of leather is elevated to an important design detail on all the seats.

In a 2010 interview with Design Indaba, Hefer said that he “Pray(s) that South Africans start recognizing creativity when it is born not after it has become successful in Europe or America.” It is certainly Hefer’s mission to bring the artistry and skills of South Africa to the forefront, and many other areas of the world could also benefit from greater attention to the talents the offer.

Perhaps some of the appeal for his work arises comes from the general magnetism that hanging chairs have. Much like a porch swing or a rocking chair, the gentle motion is calming to humans. Of course, the fact that Hefer’s seats are furry, cocoon-like enclosures makes them all the more alluring. There’s certainly something comforting about curling up in a womb-like enclosure.

In 2017, Hefer mounted a show entitled, “Heart of Lightness” which debuted seven creations, all of which are designs that feature traditional South African materials and techniques. He calls the collection a response to author Joseph Conrad’s perception of Africa in his novel “Heart of Darkness”. The show also launched the display of his first abstract piece, which resembles a big peanut with eye holes and is made from leather and sheepskin. Regardless, it is perhaps his animalistic forms that currently garner the greatest amount of public attention.

After starting with nests, Hefer’s work evolved into animal-shaped forms that are playful and comfortable.  The figures invite people to climb into the comfy seat through the wide open mouth of the beast. From toothy crocodiles to killer whales, tigers and toucans – the “Monstera Deliciosa” collection, along with other assorted creatures, is a menagerie of inviting, cheeky beasts. Despite the large teeth inside the gaping maw of these works, they are still comfortable nests, beckoning you to crawl in and curl up.

“Porky creates immersive environments that allow people to escape into a different world,” R & Company cofounder Zesty Meyers has been quoted as saying. “His work is creative and playful, and it doesn’t respond to a need. As in advertising, it creates the need.”

The whale-shaped chair is called Fiona Blackfish, in a reference to the documentary expose on killer whale treatment in Sea World parks. The furry pink tongue is a textural contrast to the leather and makes you want to be swallowed up like Jonah.

Hefer – his real last name — grew up in Johannesburg with a decidedly unartistic background. From high school athlete to army conscript to graphic designer, he eventually landed at Hunt Lascaris advertising as a commercial artist. From there, he evolved into his current work, armed with plenty of self-described “big ideas.” Hefer has said that his designs spring from a single question: Why does a chair have to be a chair? His collective works are a vivid representation of the fact that it doesn’t have to be.