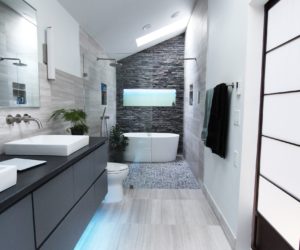 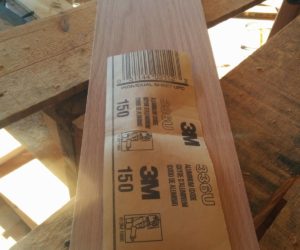 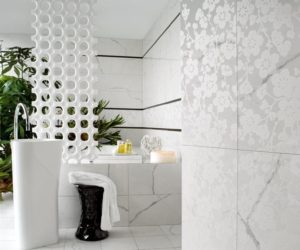 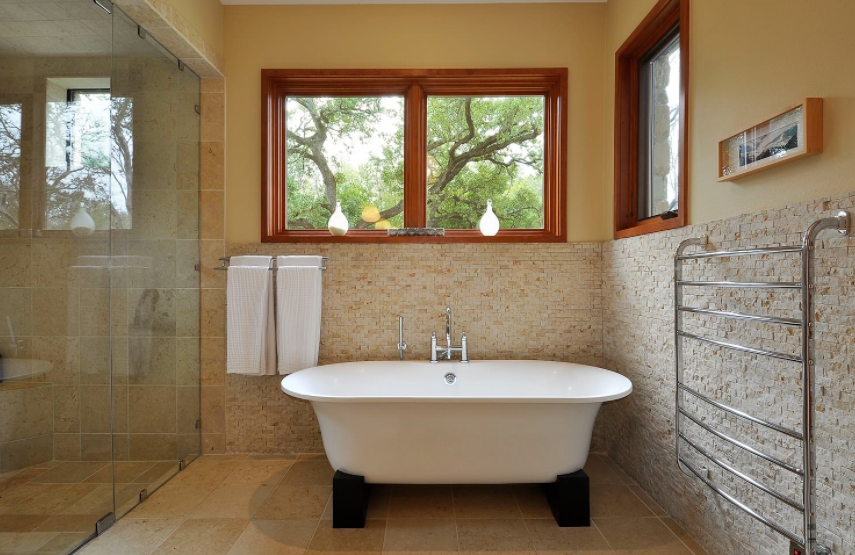 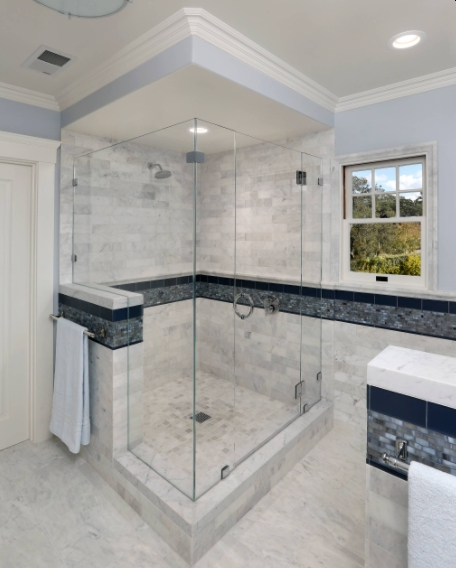 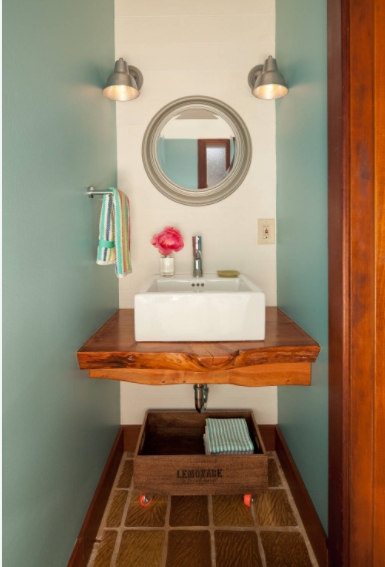 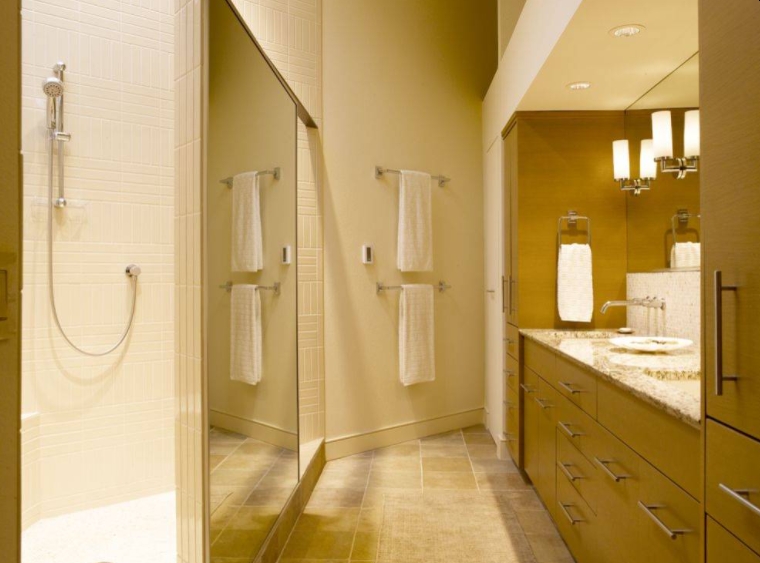 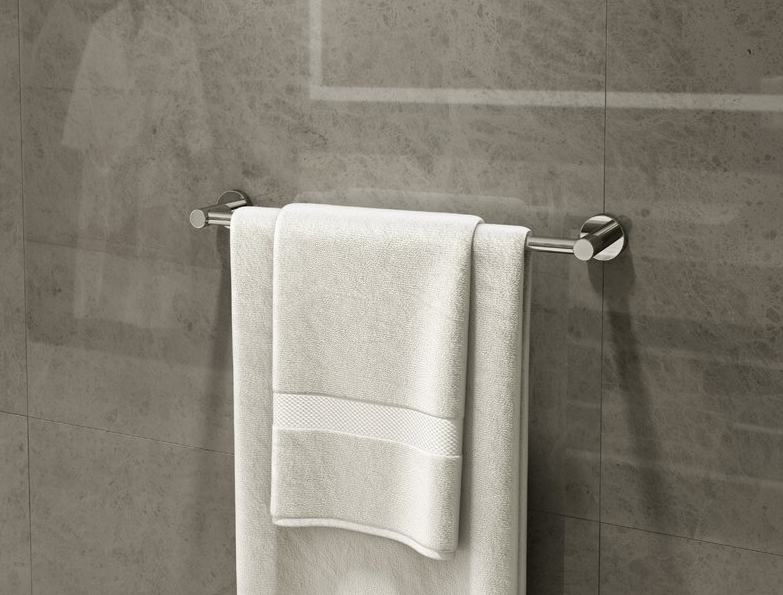 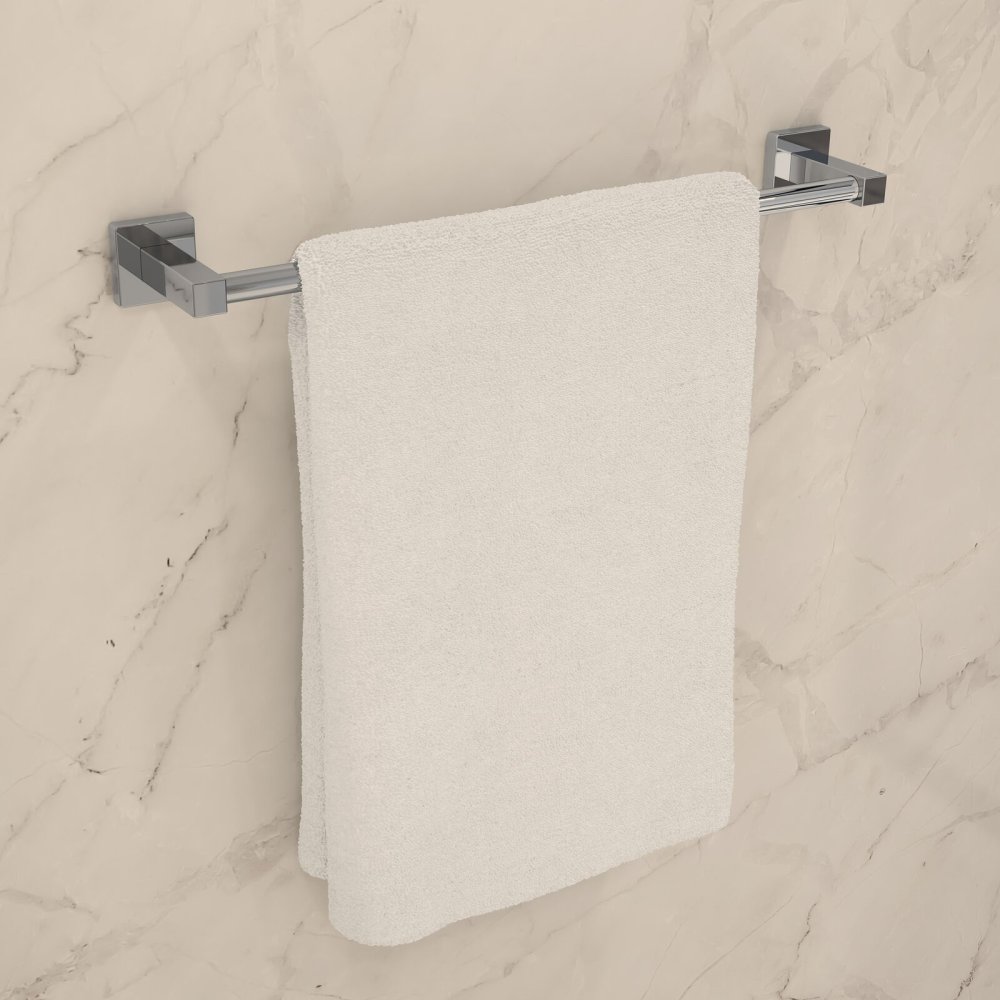 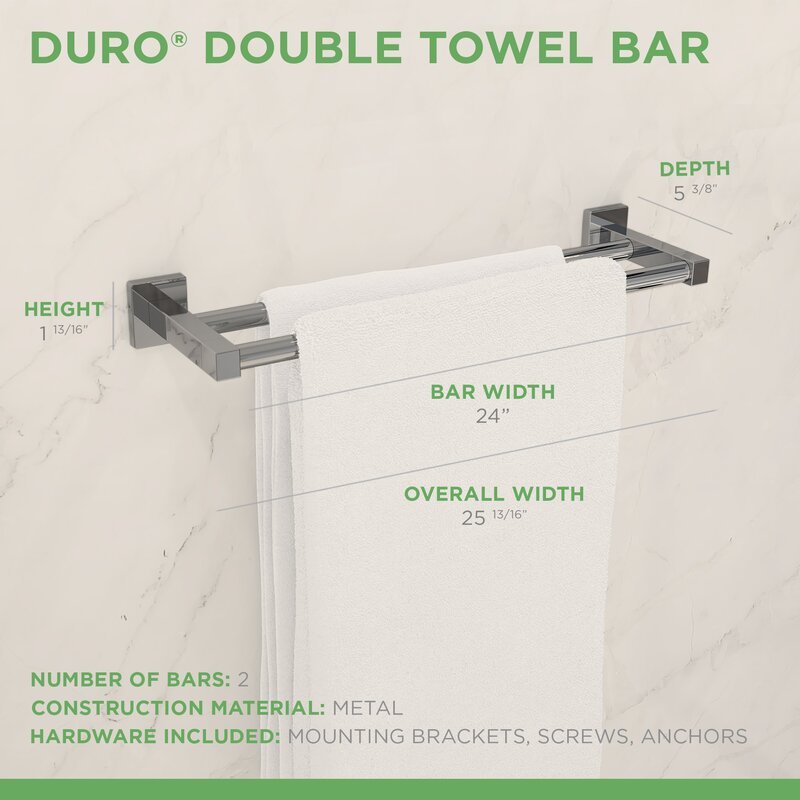 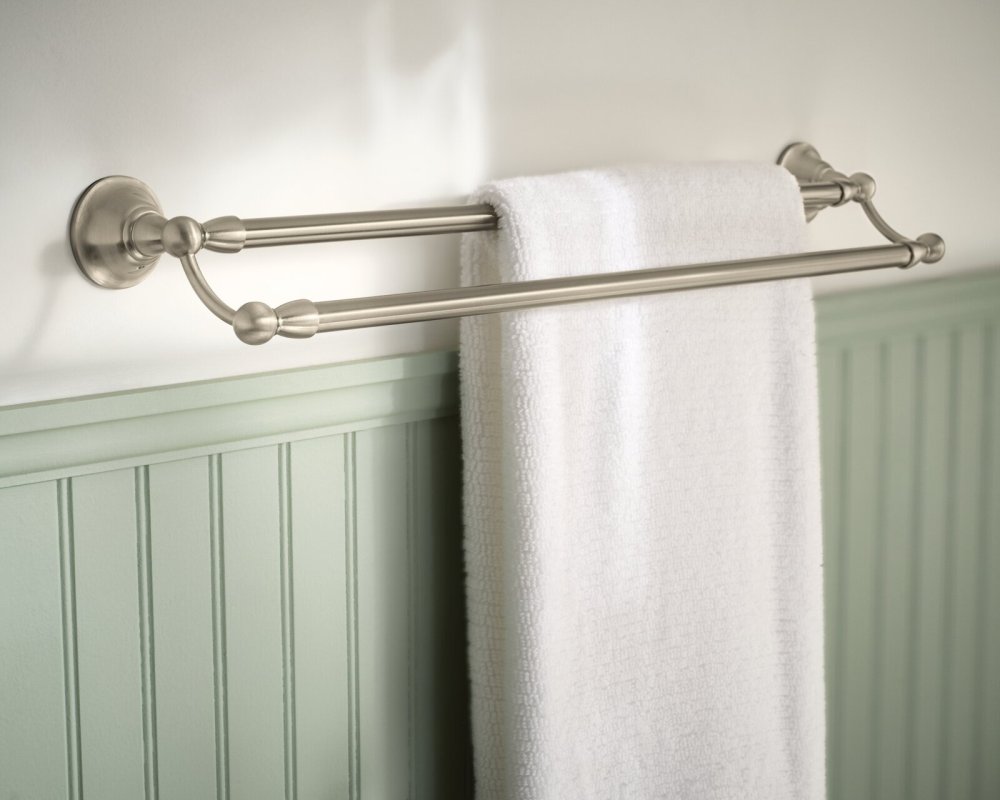 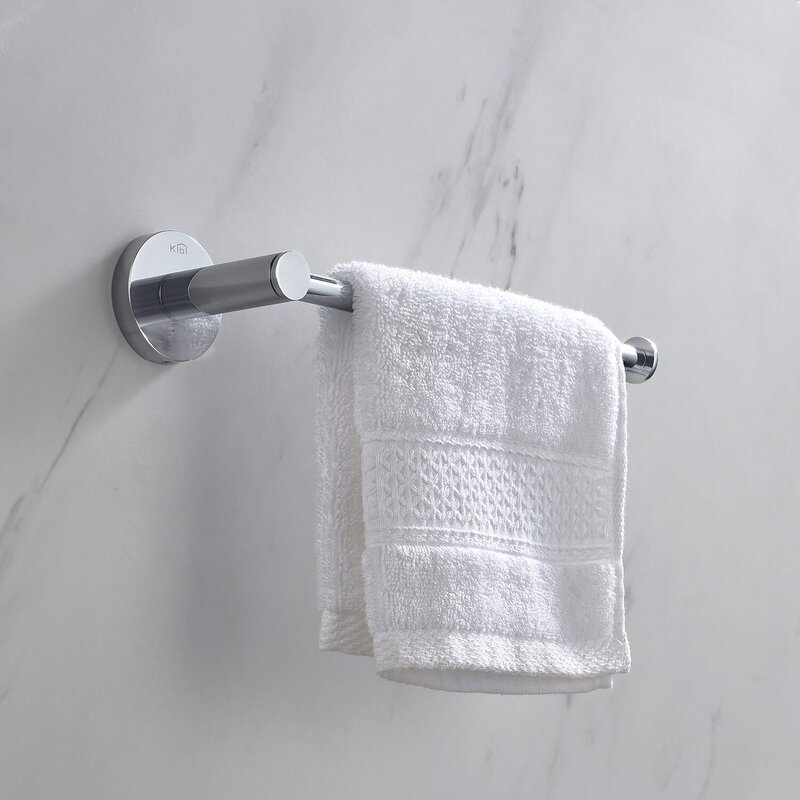 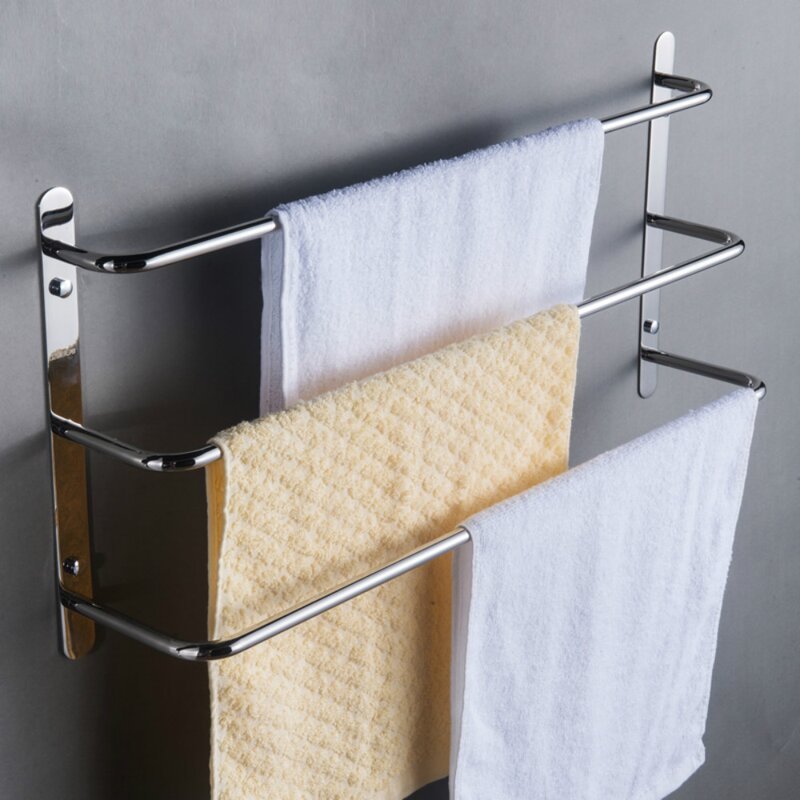 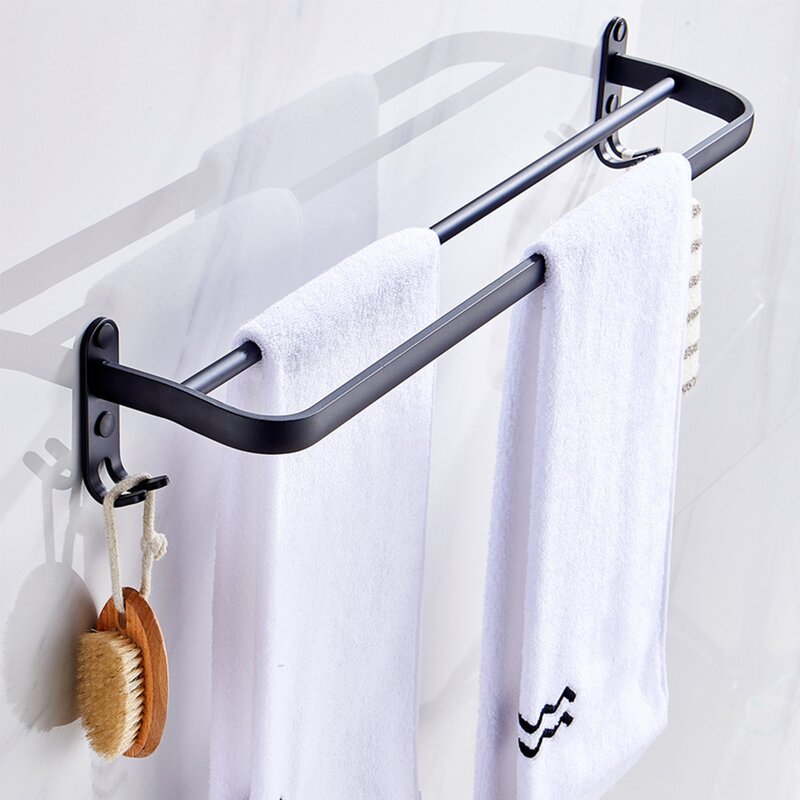 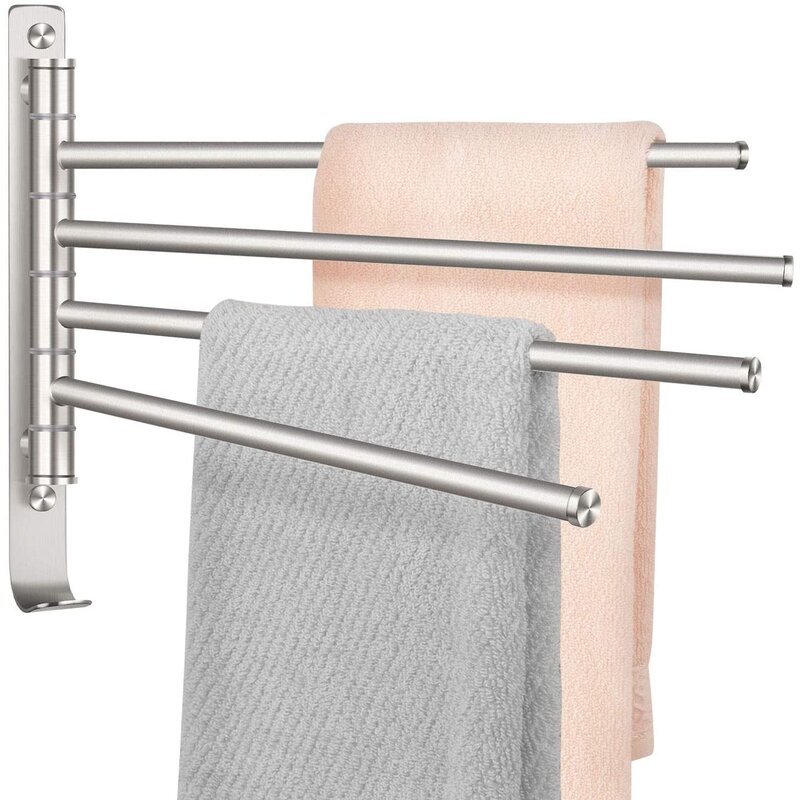 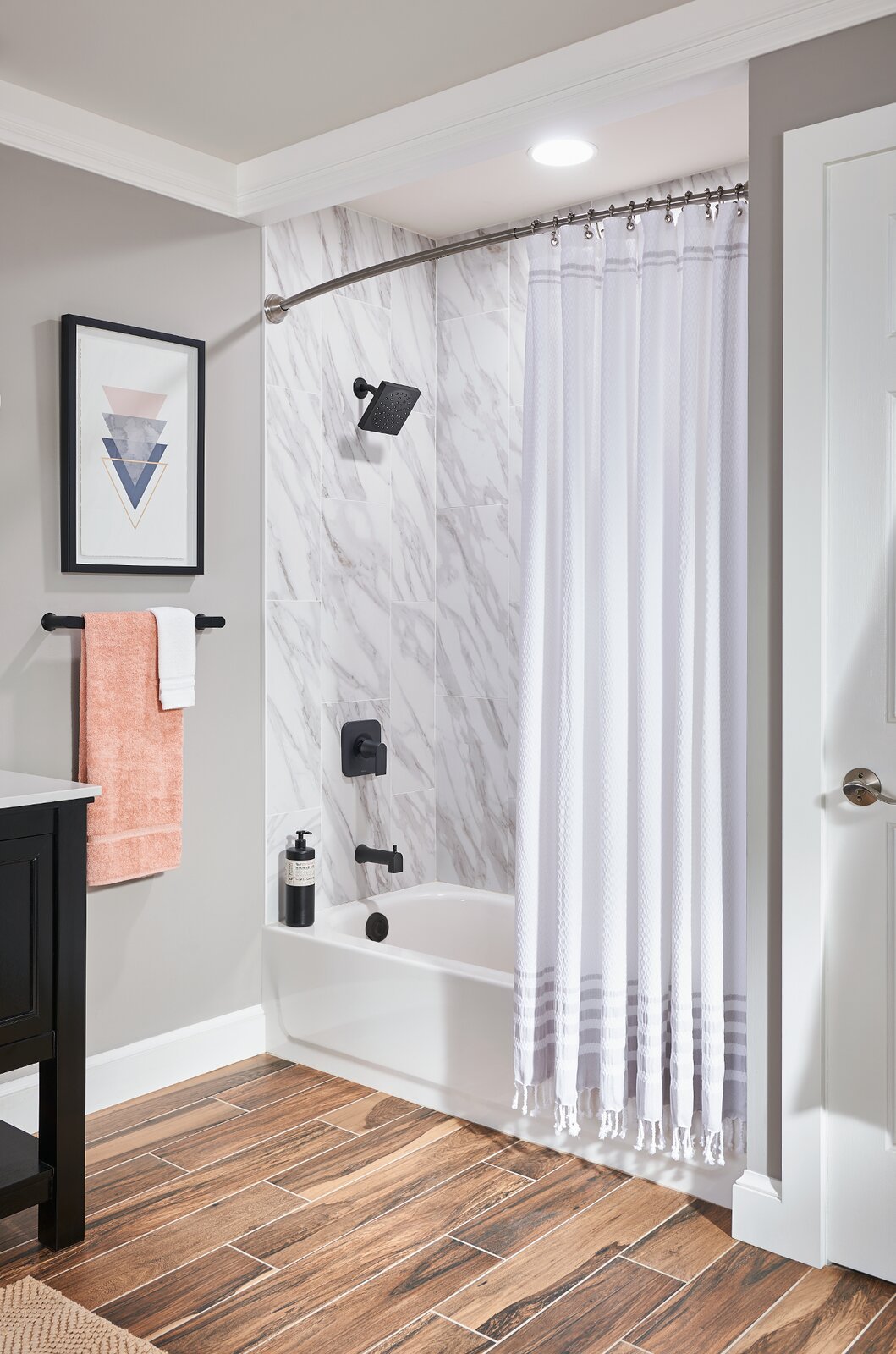 Making your bathroom all that it can be is on every homeowner’s dream list. But sometimes, it’s hard to take that vision in your head and turn it into something real. After all, our visions have all the details, but it’s hard to describe them.

So when you see that perfectly placed towel bar, you may wonder where it is in relation to the ground. That’s what we are here to talk about. Here is what you need to know about the average towel bar height.

What Is A Towel Bar?

A towel bar is a horizontal bar that can be made of any material. This bar is secured to the bathroom wall and is used to store towels. The towels can either be wet towels that are placed there to dry or towels for decoration.

Though both a towel rack and a towel ring have the same purpose, they are distinct items. A towel bar is a bar or rod while a towel ring is a ring or hook. Towel rings are usually used for hand towels while towel bars are used for bath towels.

Another difference is that a towel ring is usually placed higher than a towel rod. This is for a couple of reasons. The first reason is that it is usually above the sink and used for the towel that dries your hands.

Another reason is that the hook hangs down. So the towel will be the same height as the towel on the towel bar if the one on the towel hook is mounted higher. So it’s all about the relation to the ground, just like placing a shower valve.

Now it’s time to get down to it. What is the standard towel bar height? While this does vary due to family size, preference, and more, there is a standard for most bathroom towel bars in adult homes.

The most common heights range from 42 to 48 inches above the floor. Because there is no exact number, you can use this range to find the perfect height that you can envision in your head but can’t execute.

How Big Are Towels?

This is a simple option at a good price. The Dia towel bar can be found in four different colors and each one of them looks spectacular. The rounded ends of this towel bar make it a perfect fit for any bathroom.

If you don’t feel like shopping and want something that will work for you, get this one. Pick the color with the brush that you like and you can end it there. Sometimes the best shopping is no shopping.

This option is very similar to the first option, which makes sense considering they were both made by Symmons, who makes the best affordable towel bar options that are still high-end. Check this option out!

It is a simple, single towel bar only it is square on the ends instead of round. The bar itself is still round as it is difficult to use a non-round rod for a towel bar. But the bar looks square because the ends are square.

You would assume this towel bar was double the price since it is the same bar as the single Duro bar but it is actually a much better deal. You can pay a fraction of the price of getting two rods with this double rod bar.

It looks just as good and doesn’t take up any more room aside from a couple of inches that it extends outwards. Just make sure you place it somewhere no one will run into it since it does extend out.

This adorable and classy double towel bar is gorgeous. It is nearly half the price of other double towel bars and looks twice as high-end. The rounded knobs are adorned with unique designs that are fit for a queen.

This bar truly is unlike any other and if you are looking for the best deal on double towel bars then this is your towel bar. However, it isn’t a simple bar, it is a higher-end bar at a low-end price. Which is perfect!

This option is open on one end so it is easy to put towels on and off. It is also easy to mount and only leaves one hole in the wall instead of two. The look is quite attractive as well as being very unique.

If you want simple, cheap, and quirky, then this is your towel bar. The best part is that its quirkiness doesn’t keep it from being classy, because it is also as sophisticated as they come. This is important with eclectic designs.

If one towel bar isn’t enough and two still isn’t cutting it, maybe you need to think about investing in a three-bar towel bar. You can store at least three towels, though six to nine is more likely. This leaves room for everyone.

It also means it is fun to mix and match. You might assume the price is too steep for your budget but it doesn’t cost any more than a two-bar towel rack costs even though this really is a towel rack, not just a towel bar.

Talk about cheap! This towel bar has a double rod and a double hook system, making it perfect for right outside the shower. When it goes on sale, it is $15 or less as well which is even cheaper than a standard towel bar.

But even at full price, it costs the same as a standard bar. So if you don’t need it now and it’s on sale, then you feel free to wait because you’ll still be saving money. Though snagging a sale is such a good feeling.

Did someone say four bars? Yep, that’s four whole bars! Not only does this towel bar have four rods, but those rods are arms that can swing-out. So you can adjust them to be anywhere that you want them to be.

The bars have one side exposed so they are easy to adjust. Not to mention they look really cool spun out in a staircase or staggered way. You can customize how you leave it or design it using different towels.

This Genta bar has a flat face. This is a completely different look and can be surprisingly affordable. Although it is another simple bar, it is also very alluring because the flat front looks sleek and modern.

But if you choose the warmer colored metal and add a rustic towel, it can fit a rustic design style too. That’s when you know something is special in home decor. If you can make it perfect for your particular design.