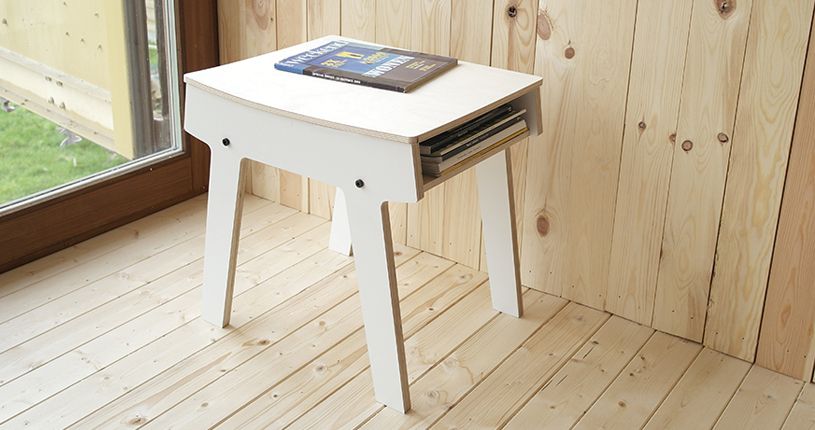 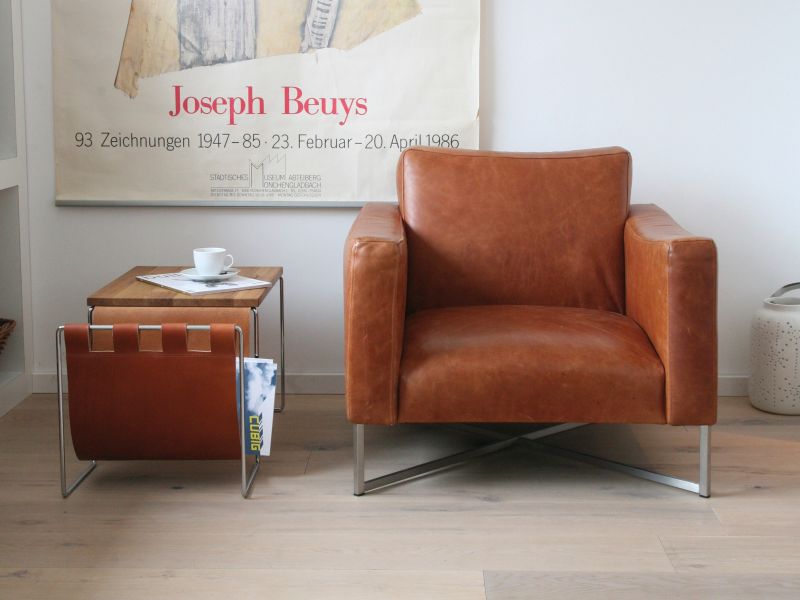 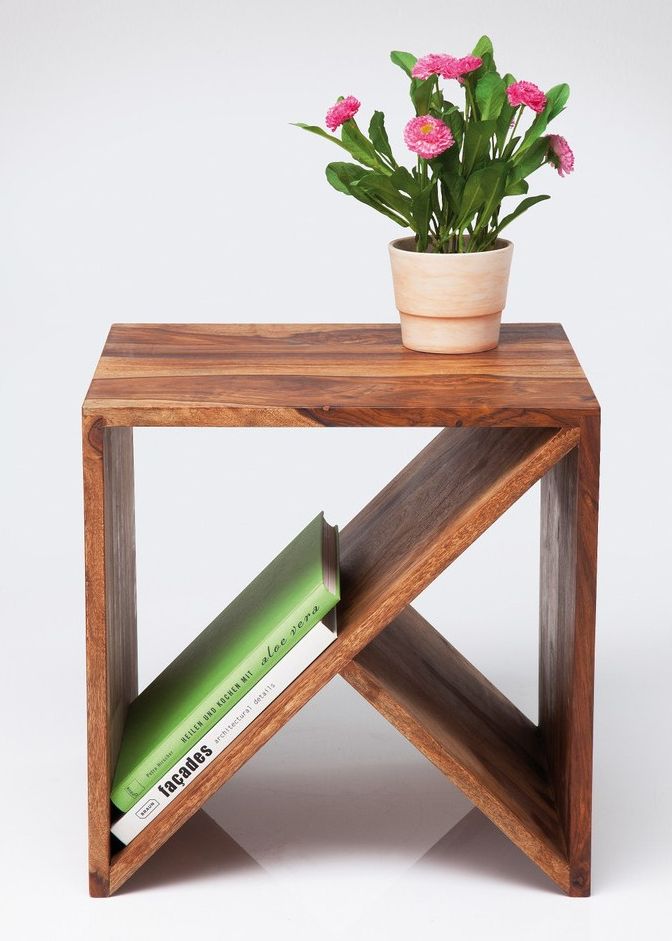 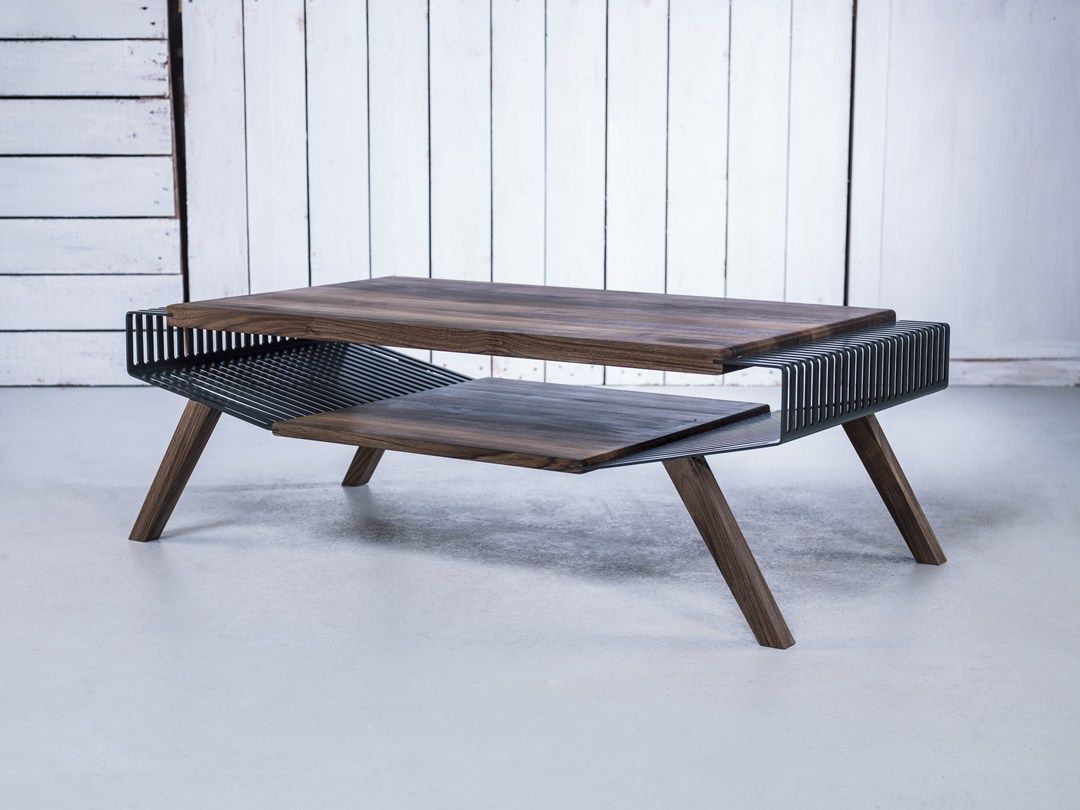 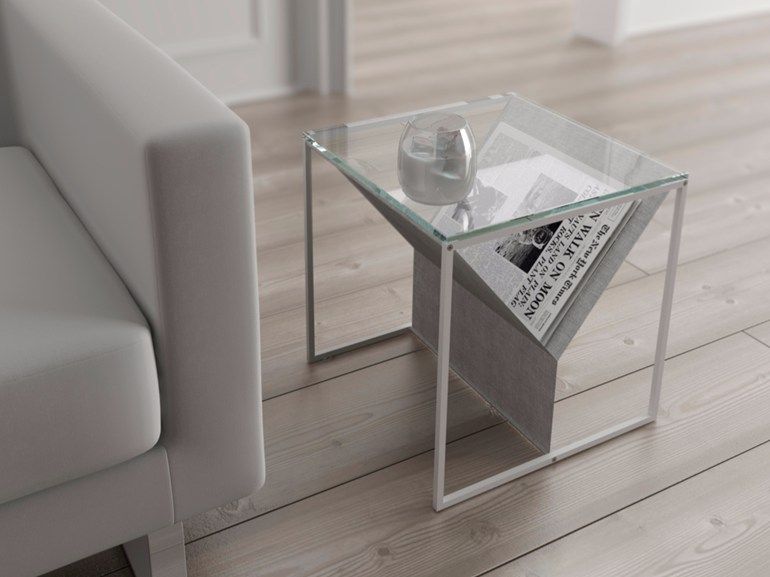 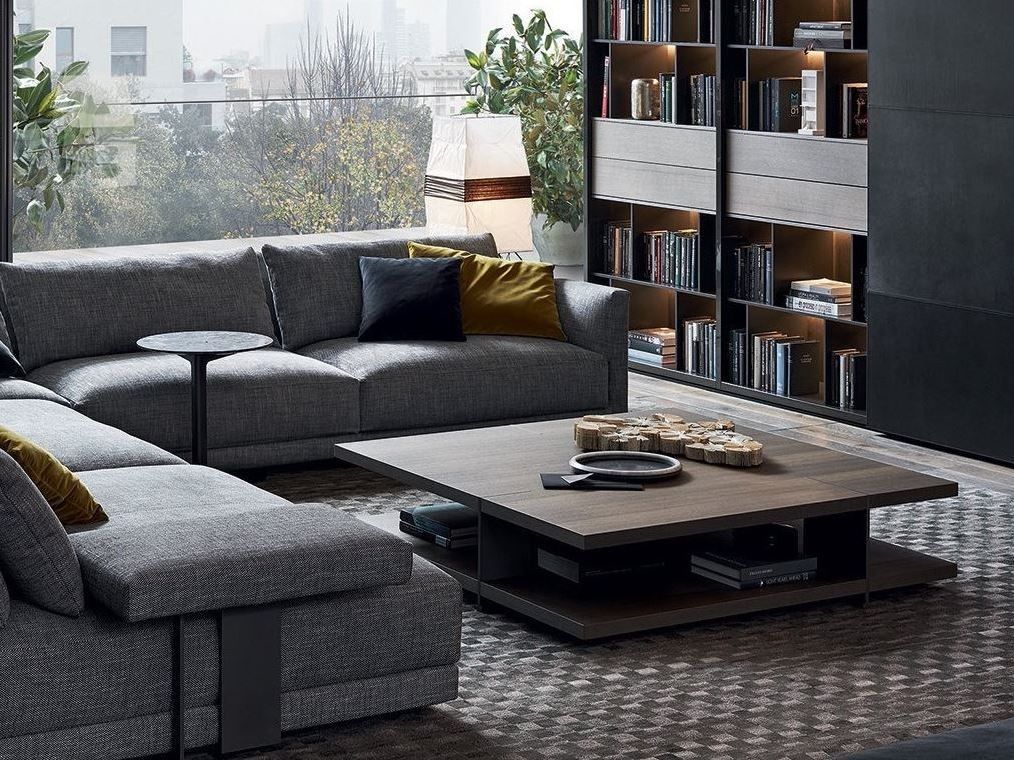 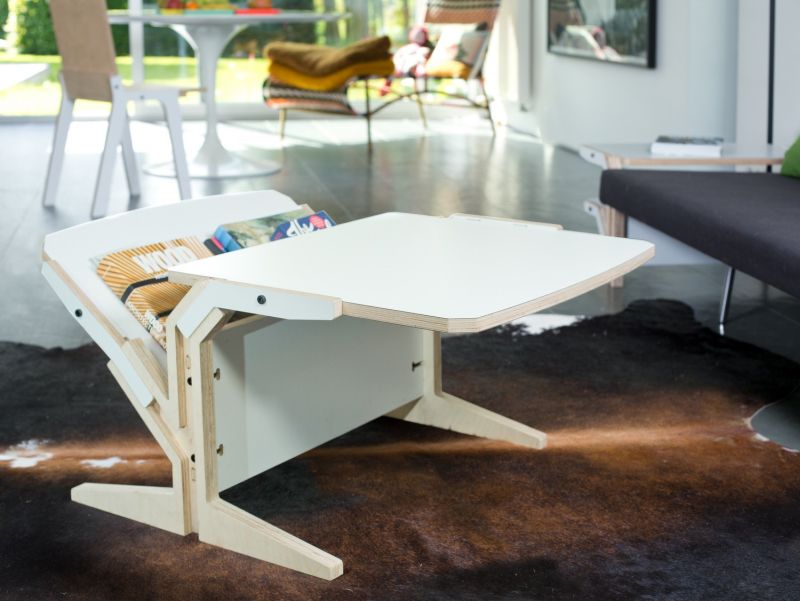 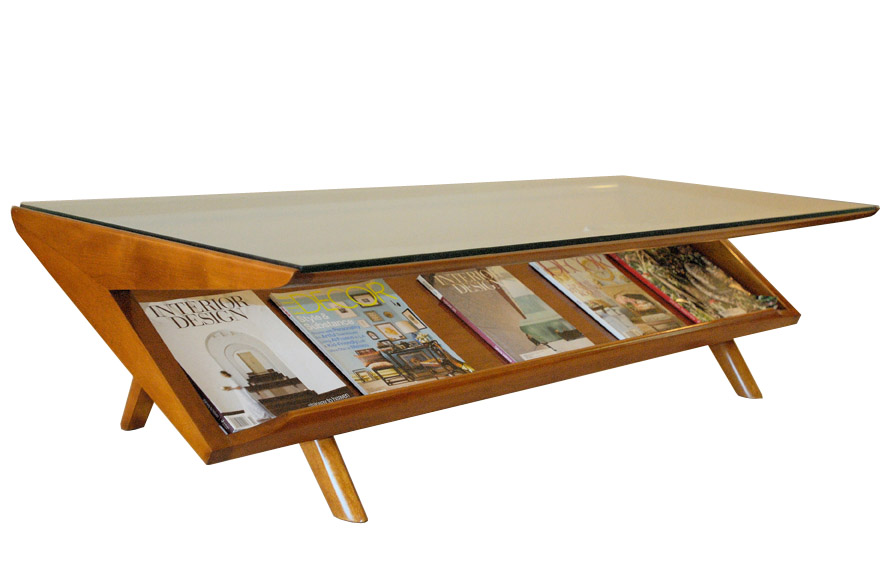 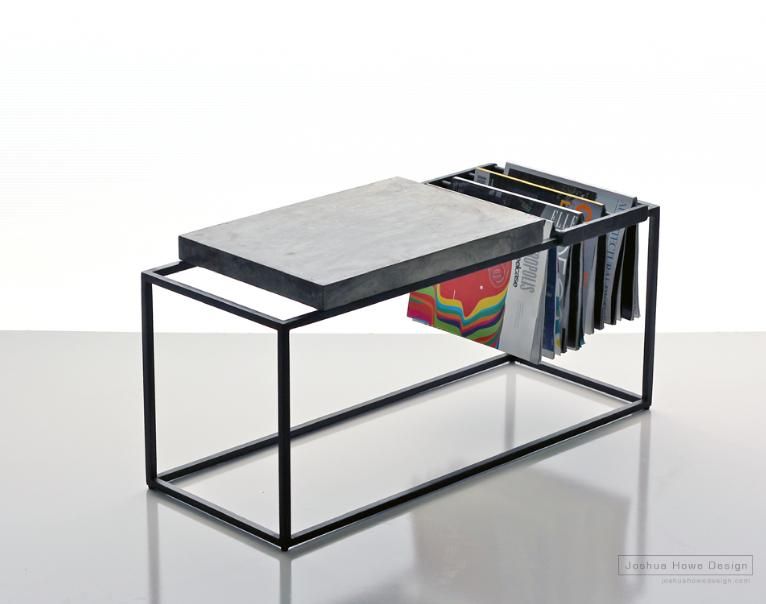 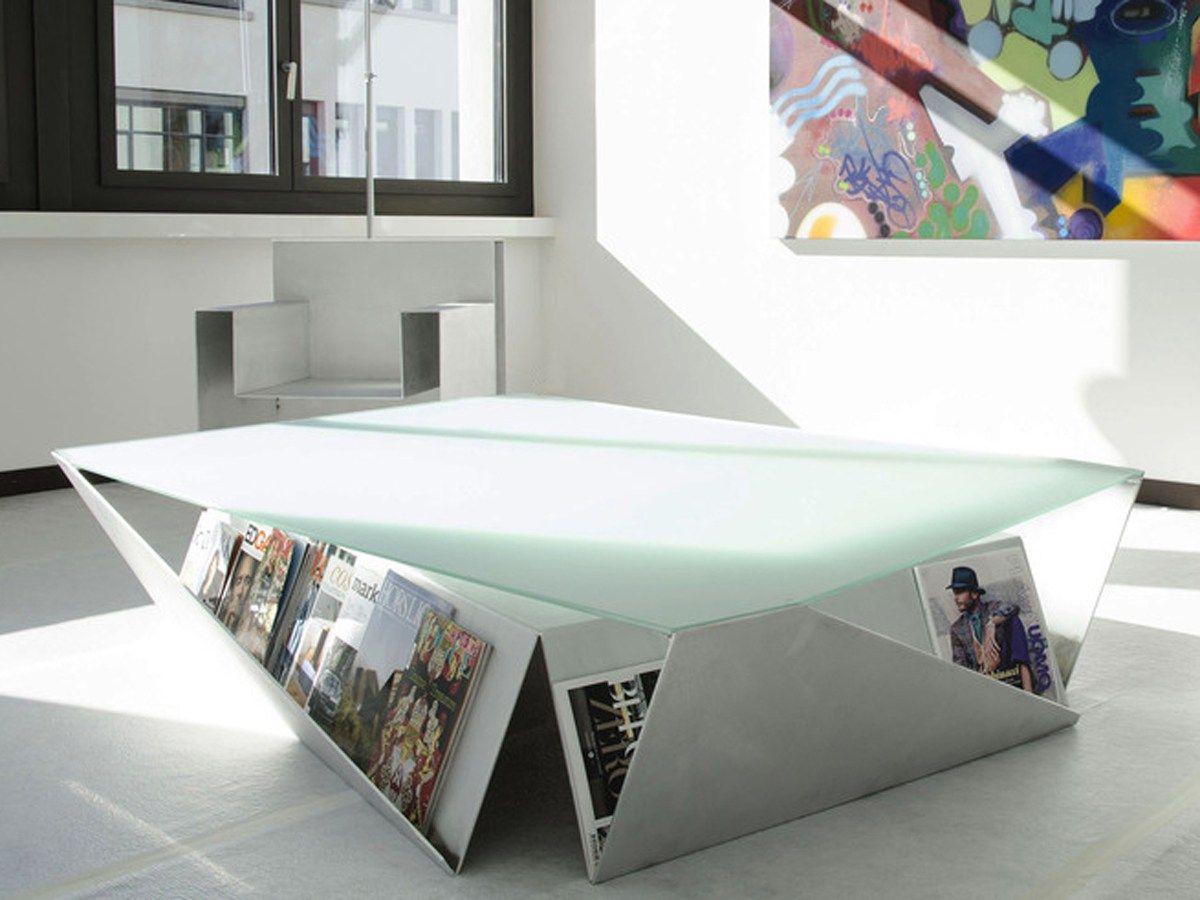 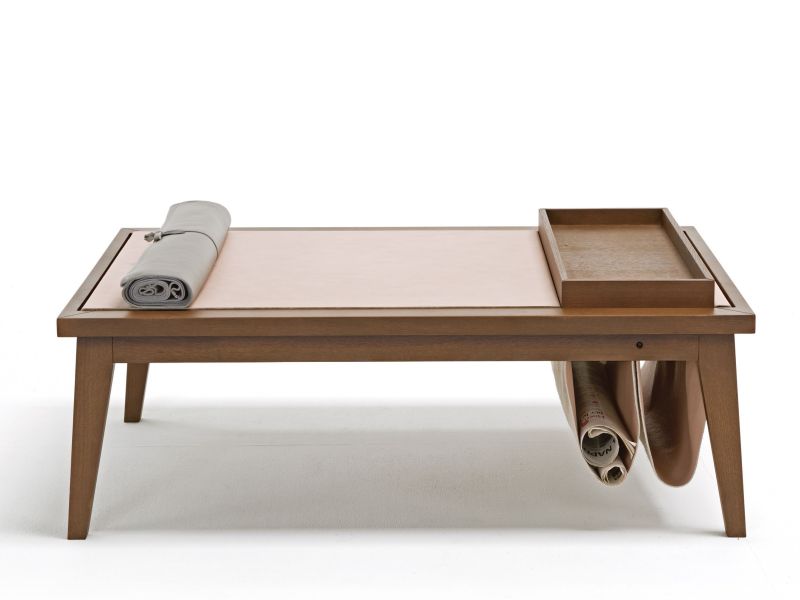 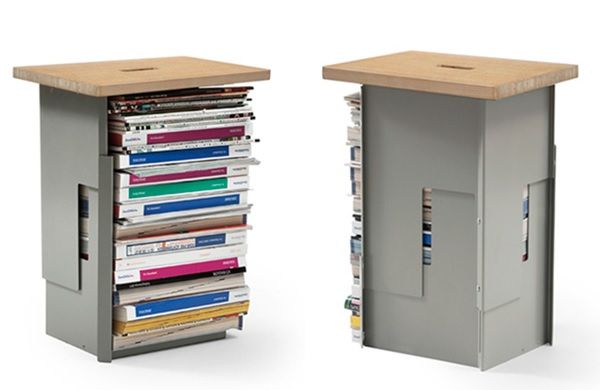 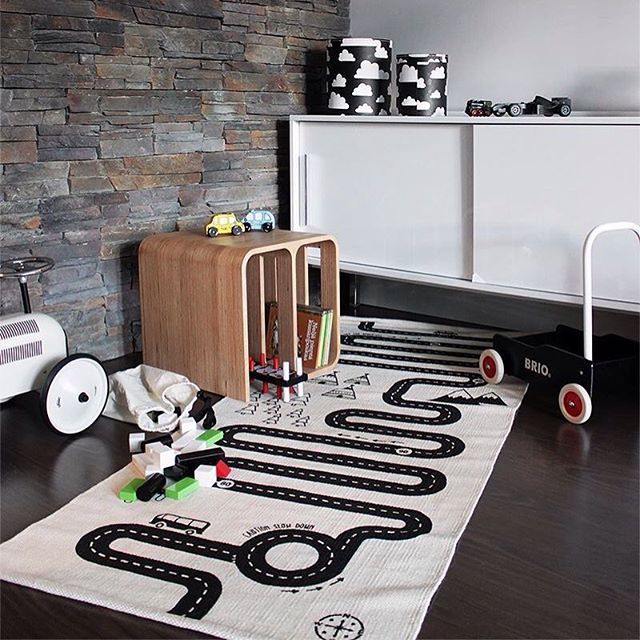 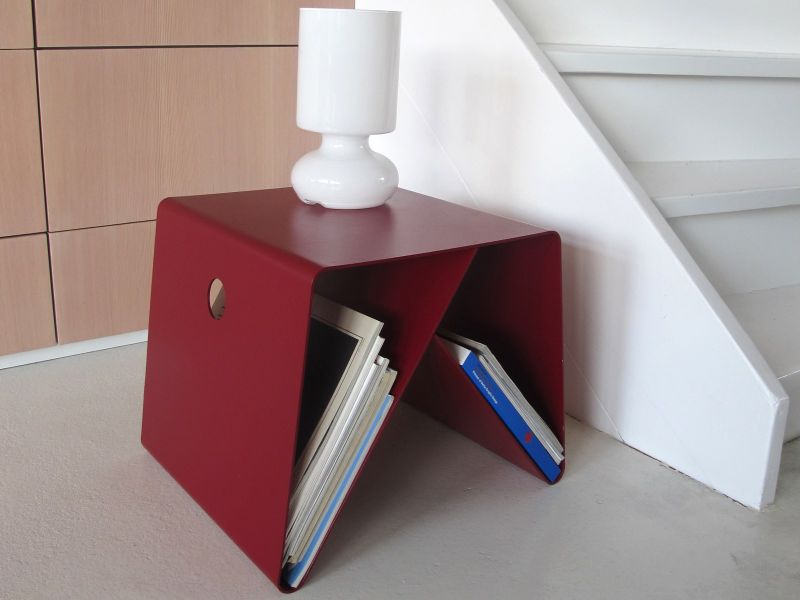 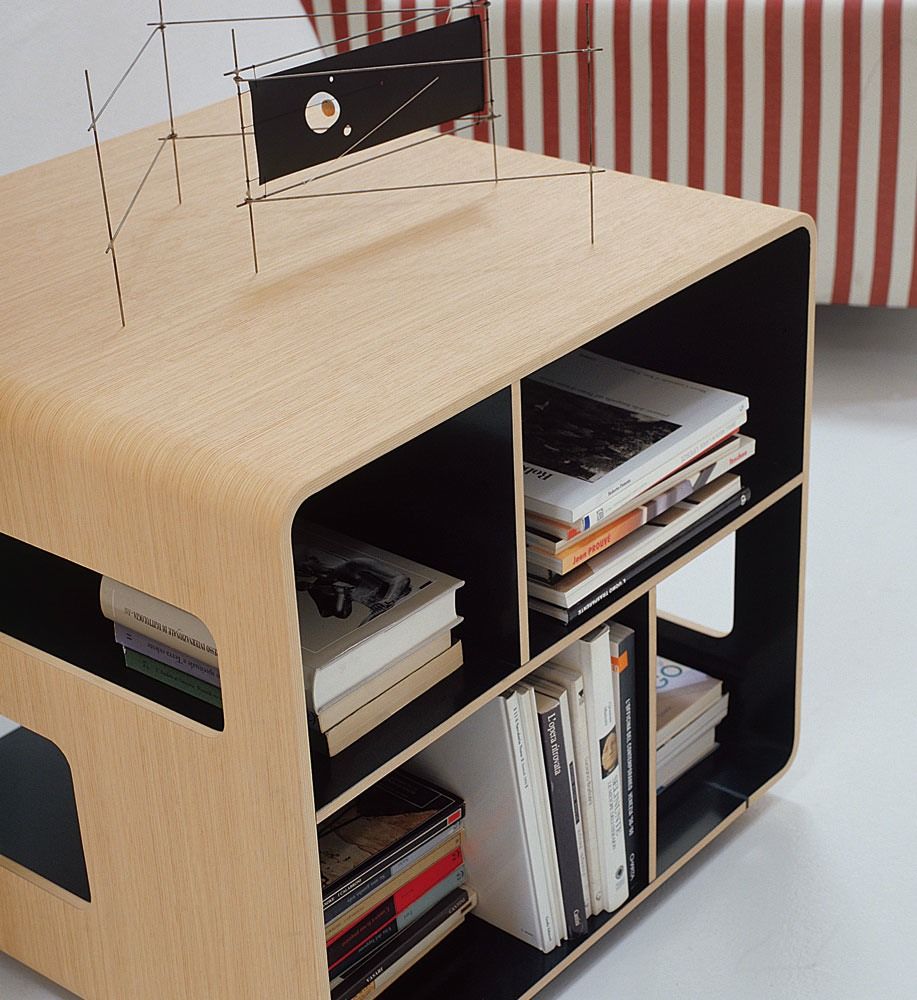 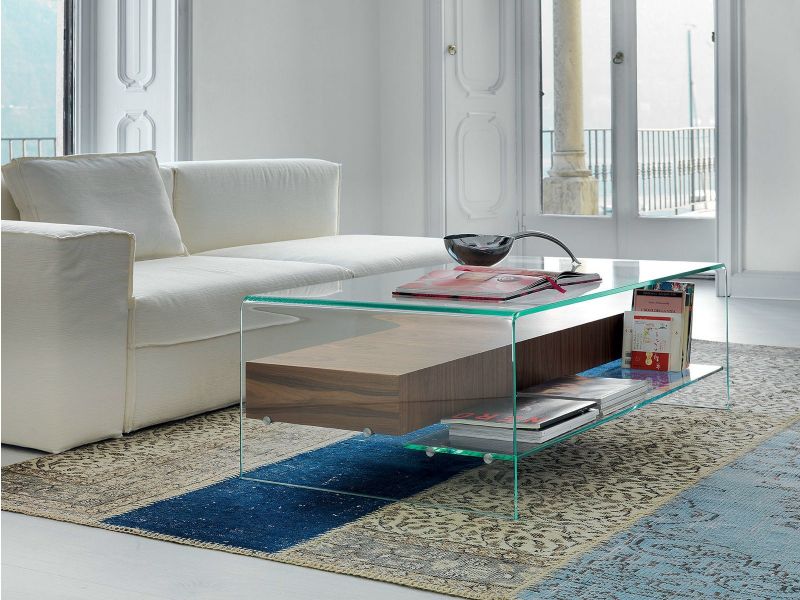 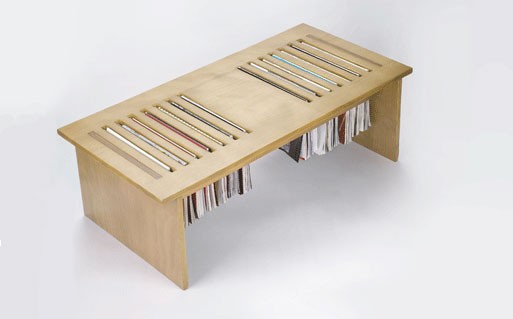 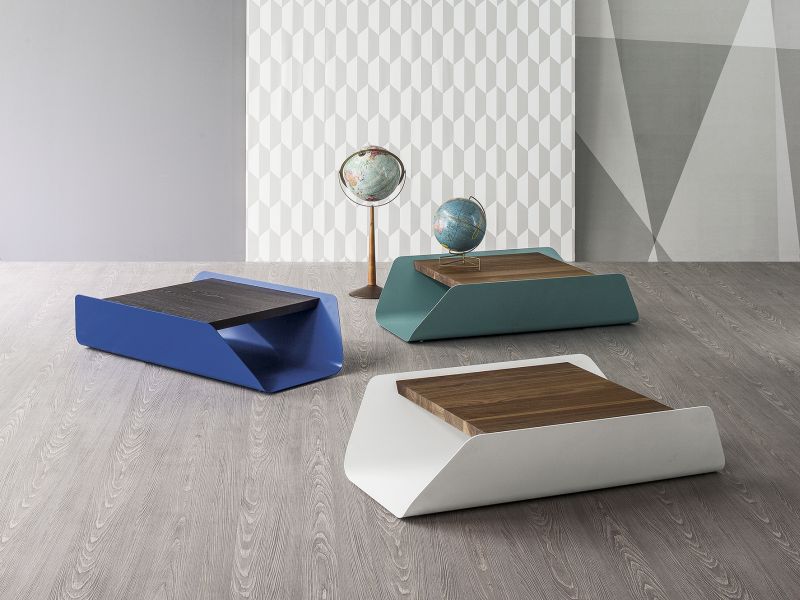 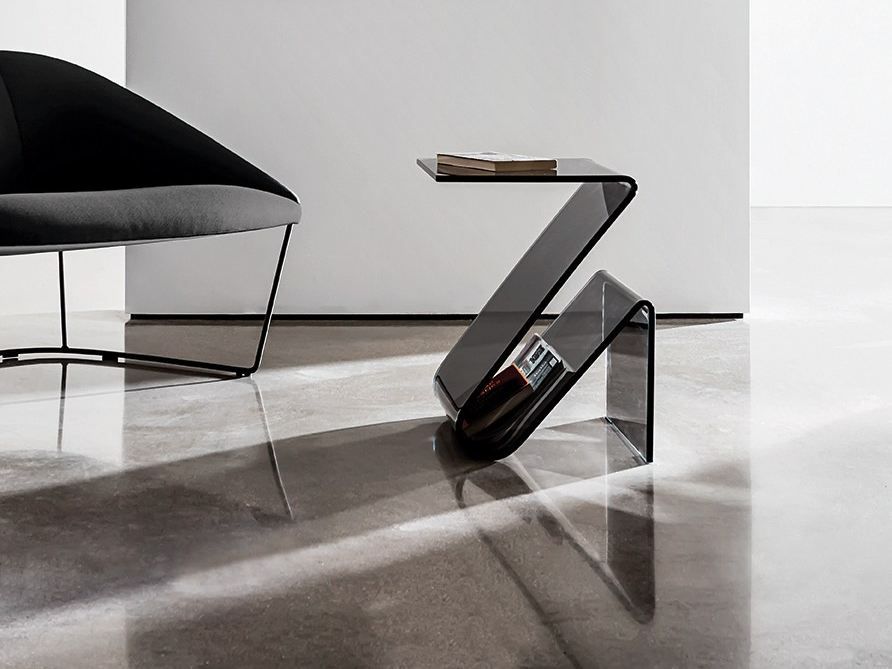 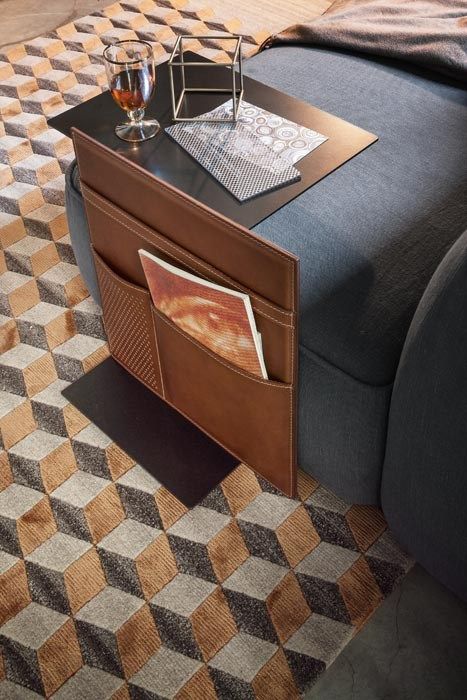 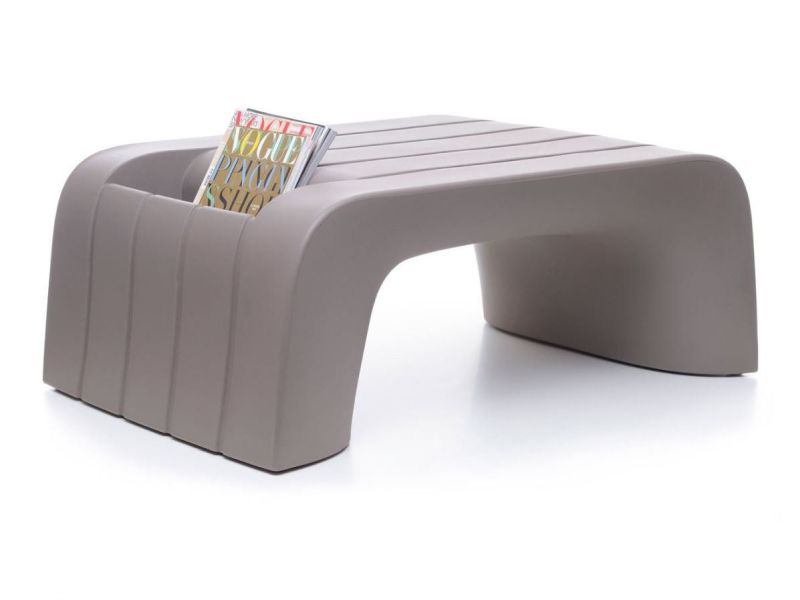 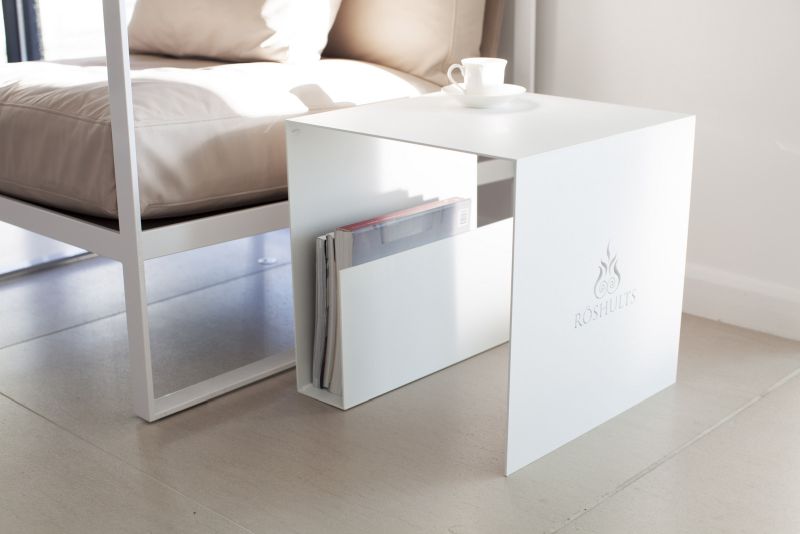 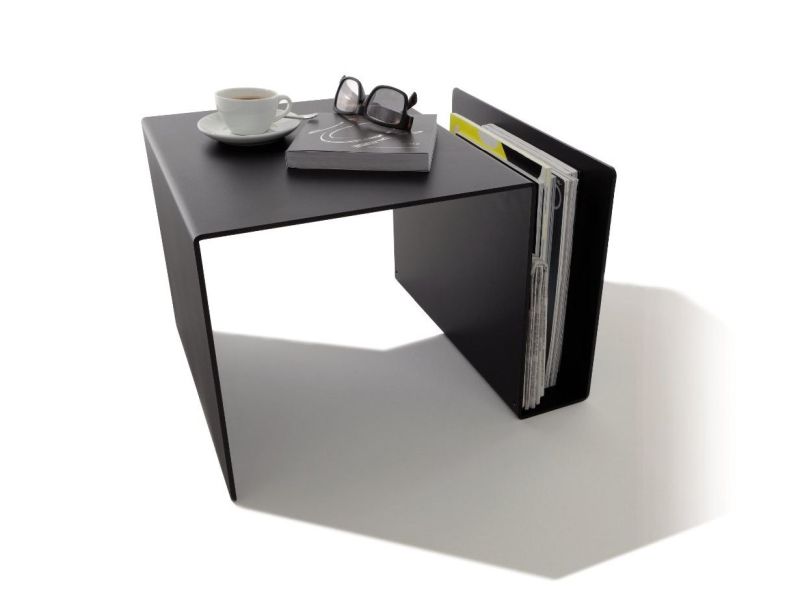 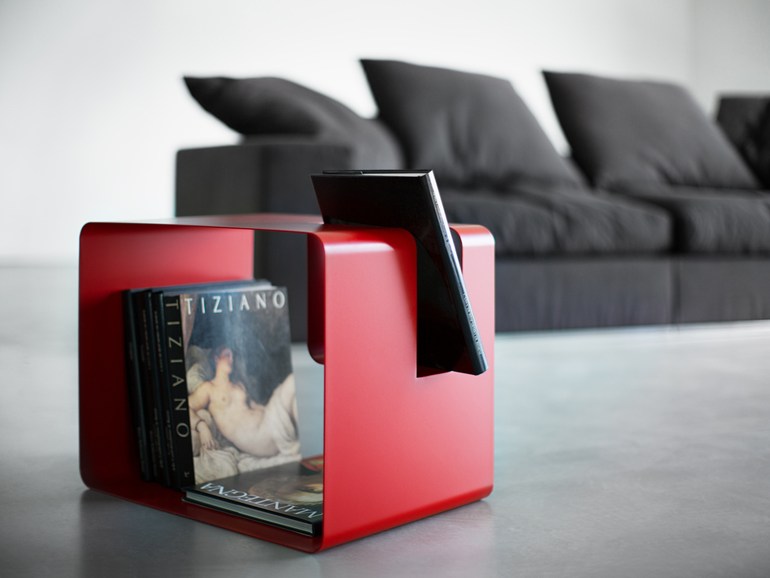 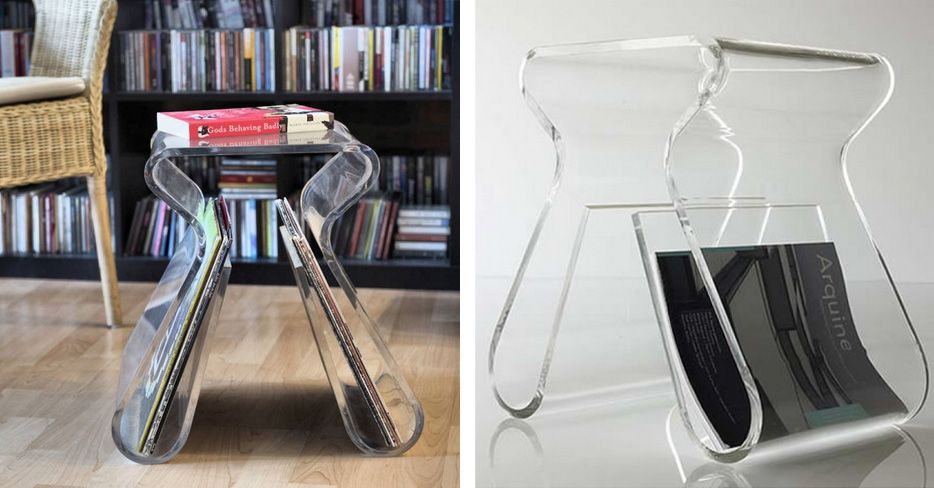 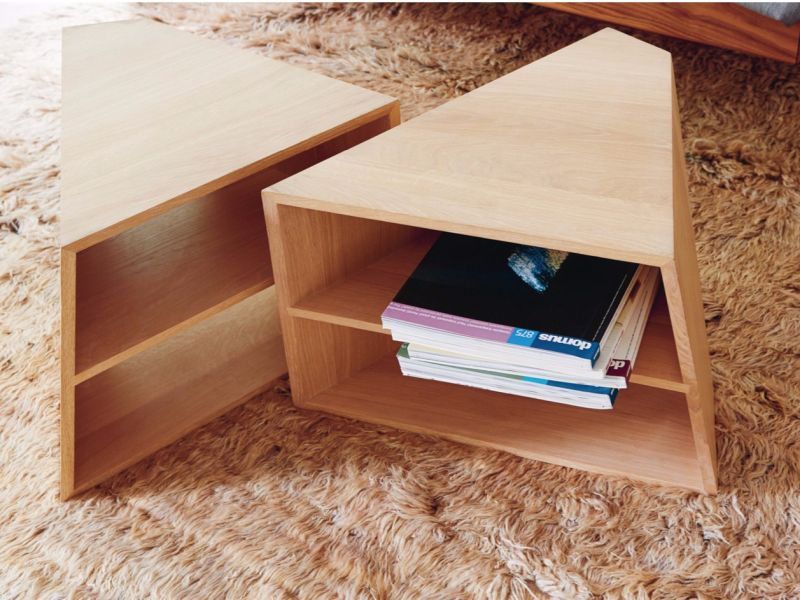 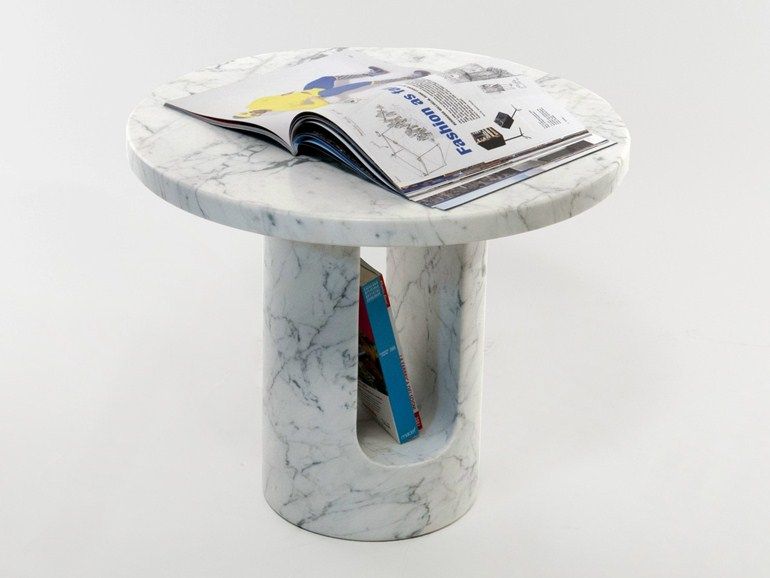 If you like to read the occasional magazine or to browse a catalog now and then, you know the struggle to keep the space tidy when you don’t have a magazine rack. But there’s really no need for one when you can store your magazines right there in a special compartment on your chair or table. This concept makes things so much easier by combining two independent functions in a single design.

Coffee tables such as the one here called Bend are interesting for several reasons. First of all, their geometric design makes them stand out. Also, the contrast of materials, textures and colors gives them a stand-out look. In addition, the compartment that forms underneath the top is an ideal storage area for things like magazines or books.

Designer Satina Turner proposes a rather interesting idea: a coffee table with a built-in magazine rack. It works like this: the top has slits in it that let you hang your magazines and even keep them open at a specific page. The table itself is very simple, looking very similar to a standard bench.

The square shape of the Arne coffee table is reason enough to find it good-looking. But there’s more to it than just that. Designer Antonio Citterio envisioned it with a series of internal compartments arranged in an asymmetrical fashion. They are perfect for the storage of books, magazines and other things including a remote control or phone.

Given the reduced dimensions and the compact design of the BT4 table, it’s possible to use it in a variety of ways. For example, turn it into a chic nightstand for the bedroom, use it as a side table in the living room or as a coffee table. It can even be used as a stool. The built-in magazine rack further increases its functionality and makes it highly versatile.

A similarly versatile furniture piece is the Woodieful Chair. Even though it’s a chair, it can also be used as a small table. But the lovely thing about it is the adaptable and versatile design which makes it useful as a rack for storing magazines, books and various other objects, depending on the placement and requirements.

Useful both as a stool and a side table, the Collecteur is a quirky and fun furniture piece. It was designed to have an adjustable height and inside there’s a storage compartment for books and magazines. Basically, it grows with your collection and adapts to your needs. Use it as an extra seat when needed or as a side table. It would be perfect for the reading corner.

Called Magino, this stool doesn’t have much to hide. It’s a sleek and minimalist accessory designed by Karim Rashid. Because it’s made of transparent acrylic, it can go unnoticed in a lot of different decors. It’s supported by two bent legs which form two storage slots for magazines. The design is graceful and simple, giving the stool an organic and versatile look.

Being made of marble, the U-turn table has a certain elegance and charm that’s quite difficult to obtain through other methods. Moreover, this material also gives it more versatility, allowing it to become a chic piece for both indoor and outdoor areas. The table has a round top and a cylindrical base with an integrated magazine rack inside.

The tactile beauty of the Bergen table comes from the selection of materials. The actual table is quite simple, featuring a rectangular top and four angled legs. The top, however, has an interesting leather cover which forms two pockets for the storage of magazines and other things. This leather cover is removable and replaceable which means that you can change the table’s look according to its surroundings or the type of ambiance you’re trying to create.

An integrated magazine rack is also part of this coffee table. it’s designed by Gil Coste and called Varan. Its design is geometric and modular which means that several of these units can be combined to create a more complex structure. You can have as many of these coffee tables as you want and their storage capabilities increase with the number.

The Origami table lets you store magazines under its sleek rectangular top. The table appears to unfold right before your eyes and its name is very suggestive for that. Designed by Sophia Slingerland, this elegant coffee table is made of aluminum and has a very simple form inspired by the Japanese art of folding paper.

This is both a magazine rack and a side table and there’s no way to say which function takes the lead in the design. Both are equally important and well displayed. The WF Magazine Side Table featured a steel frame which gives it a graphical look and a top made of waxed concrete. The magazine rack comes in the continuation of the top and they are both removable.

Combining three functions in a single compact form, Libris is a highly versatile piece. It can be used as a coffee or side table, as a magazine rack or as a nightstand. The magazine rack is always there and can be combined with wither of the two other functions at any given time. A cut-out opening in one side of the table offers a practical storage area for books while the large space inside the frame can be used for magazines or even more books.

There’s something quite intriguing about this coffee table and not only because it’s called Magazine. The table has an unusual V-shaped body supported by four small angled legs. It has a clear glass top which allows you to see beneath and to put your favorite books and magazines on display using the built-in angled rack below.

The unusual form of the Vegetale table is meant to mimic the shape of a tree in a rather graphical way. In order to make the design as suggestive as possible, the table has two panels, a horizontal one and one placed at an angle. They form a small top and a storage pocket for magazines and books. This mufti-layer coffee table pairs well with contemporary and eclectic interiors

Despite the fact that it wasn’t specifically designed to hold magazines, the Bistro coffee tables makes quite the efficient magazine rack. It’s a low table with a simple design. It has a square-shaped top and a shelf beneath it which can be useful for the storage of remote controls, personal items and the occasional book or magazine.

On the other hand, the Zincr table is meant to double as a magazine rack. Its Y-shaped central pocket allows you to place an open book or magazine there while the clear glass top lets you see beneath and even read without holding the magazine. It’s a pretty ingenious combination and it comes in a very simple form. The table has a steel frame and it’s a versatile accent piece.

The sculptural design of the No 2 table makes this an eye-catching furniture piece for a lot of different spaces, including modern living rooms or eclectic decors. The table is designed by Aleksandar Ugresic and is made of solid wood. It has a storage shelf connected to the top through a perforated steel frame. The combination of materials adds a refined industrial touch to the design.

Part of the Authentico collection from Kare-Design is a table called Cube ZigZag. Its design is simple and the name is quite suggestive. The dimensions indicate this would best serve as a side table. The piece is made of solid wood and the frame is organized into two storage compartments. They are both triangle-shaped and meant to be used for the storage of books or magazines.

It’s clear the Note is a side table meant to be used in combination with a sofa or sectional. It can very well serve as a laptop table or a place to rest a drink on. But there’s more to it than just its minimalist design and painted metal construction. The table has has a magazine rack attached to its back. Three pockets of different sizes can hold various types of magazines.

Meet Murray, yet another stylish table with a built-in magazine rack. In this case, the table has a square top and is entirely made of 4 mm iron. It comes in black, white or with a matte clear coat. One side of the frame forms a fold able to hold a few magazines or a couple of books. The table was designed by Per Franson and has a chic look with a little bit of industrial charm.

The design of the Zeta table is defined by minimalism and elegance. The table was designed by Gianluigi Landoni and is made of glass. It gently bends and curves and its form is reminiscent of the letter Z, hence the inspiration for the name. As you can easily guess, the table also doubles as a magazine rack.

Simple named Groove, this coffee table has a really solid and playful look. Its name comes from the fact it has an actual groove on one side of the top which can be used as a storage compartment or magazine rack. The table is made of polyethylene. The interesting thing about the groove is that the storage box we just mentioned also has a drainage hole at the bottom which lets you use it as a cool box for drinks.

Because of the simplicity of its design and form, the HUK table can be used in a variety of ways. Depending on what you want to use the storage pocket for, you can have it sitting on the side, the bottom or the top of the table by simply slipping the piece and changing its orientation. In certain configurations, the pocket makes an excellent magazine rack.

And speaking of pockets, we should also have a look at the NL table. It has a square top made of wood but that’s actually the less interesting part of its design. The unusual element is the frame extension which features a leather pocket. that’s in fact a magazine rack. The table top is available in several different materials and the frame is always made of steel.

Glass coffee tables are in a category of their own. You can either love them or hate them. Either way, you have to admit that the Bridge model is quite outstanding. The actual table is made of glass and has a curved frame which holds a thick wooden shelf. Underneath the glass top, a storage compartment is formed.

This cute and cheerful table is called PI, after the Greek letter and the mathematical constant. It comes in nine different color versions and it has multiple functions. It can be used as a side table, as a stool, coffee table or as a storage piece and magazine rack. You can choose between two sizes, a small one more suitable as a side table and a larger version which can be successfully used as a coffee table.