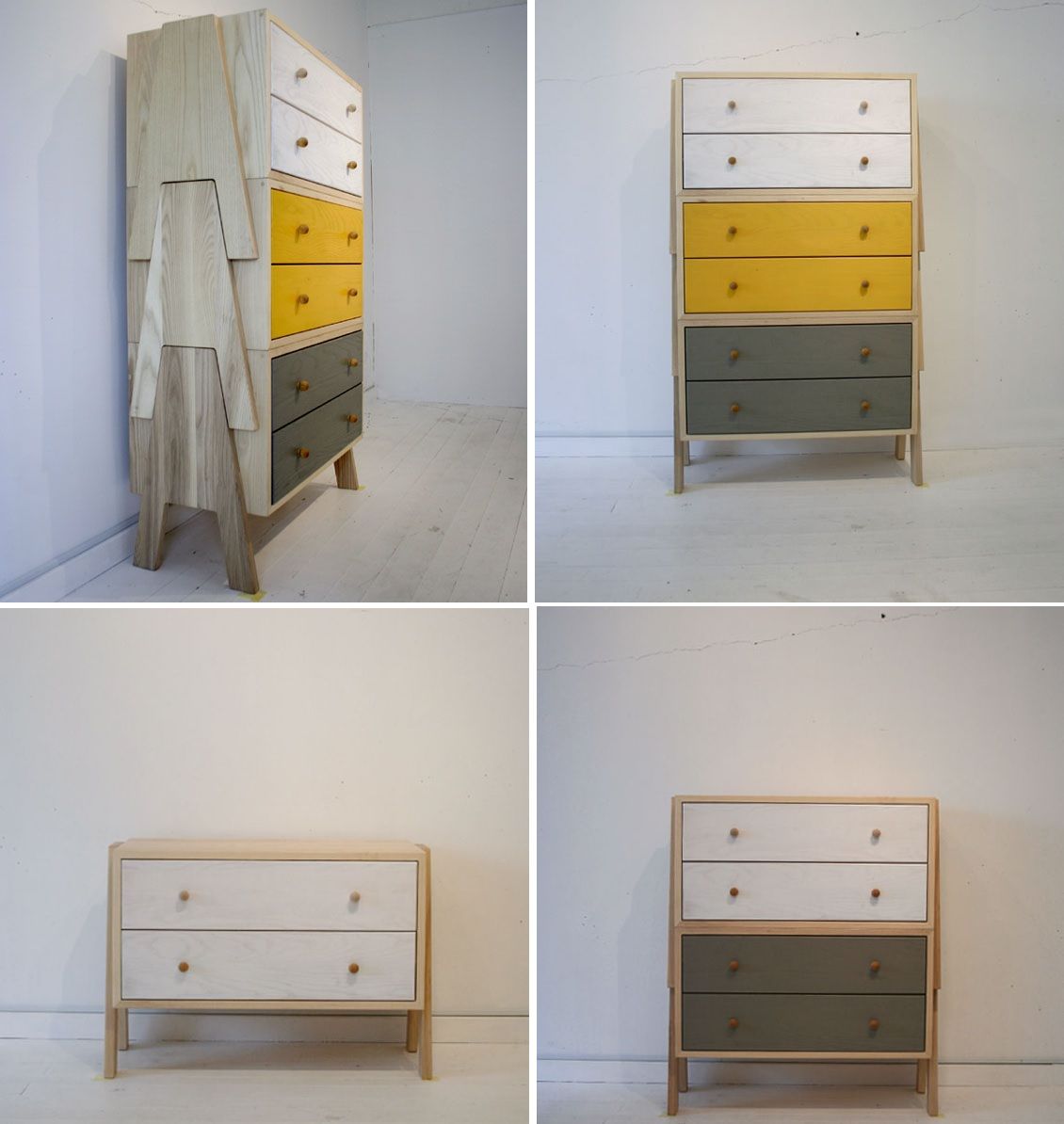 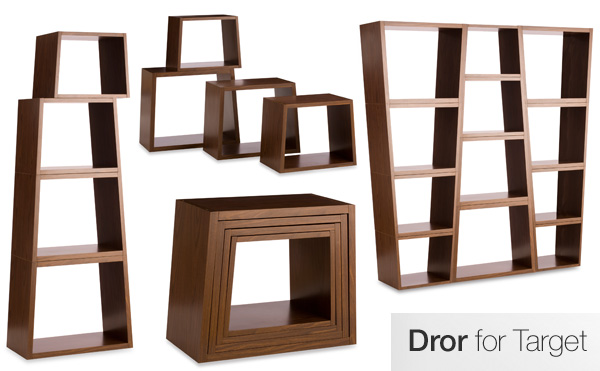 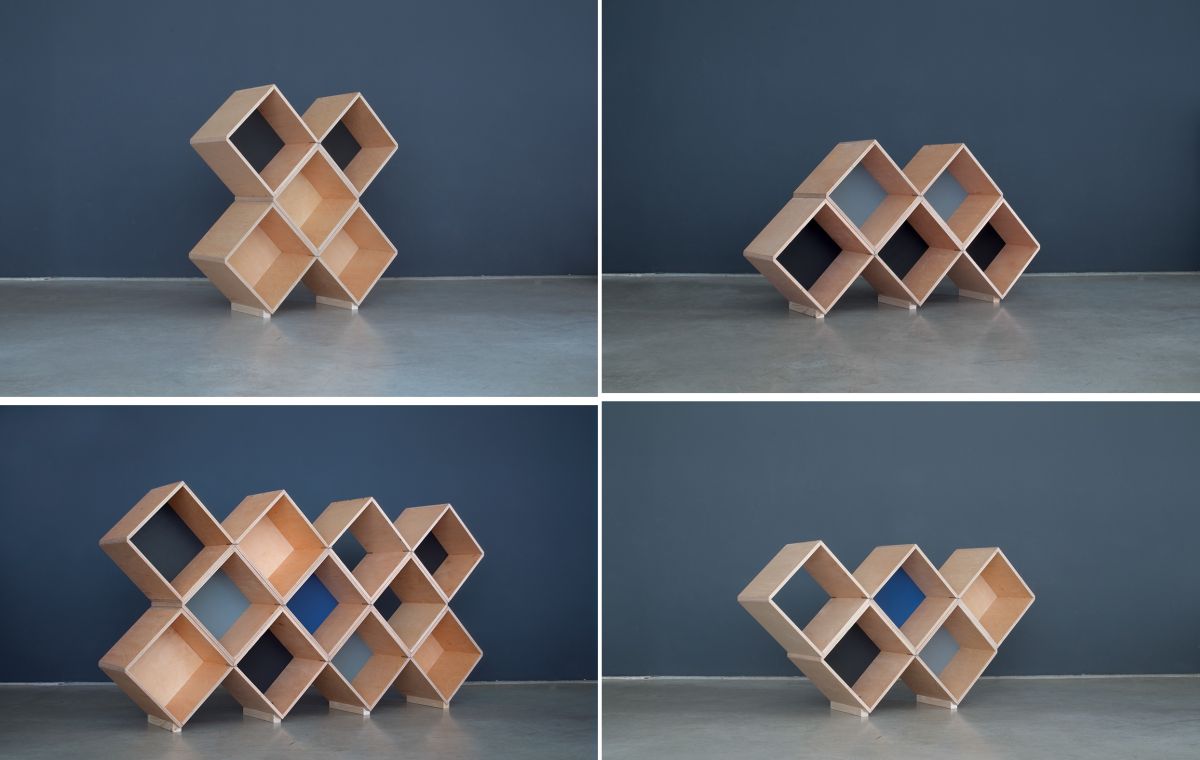 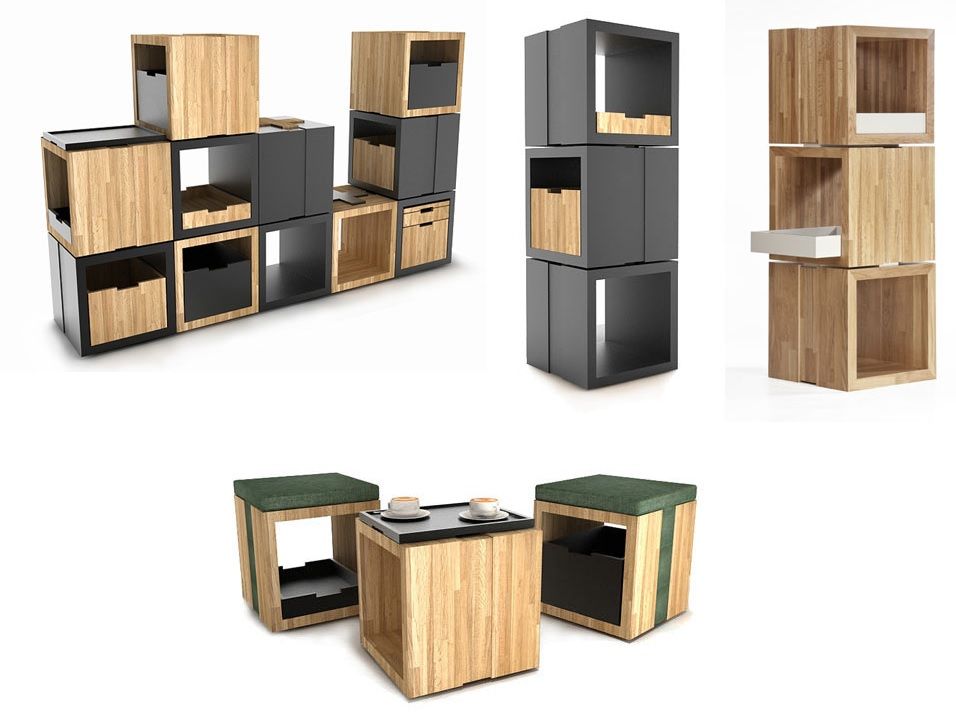 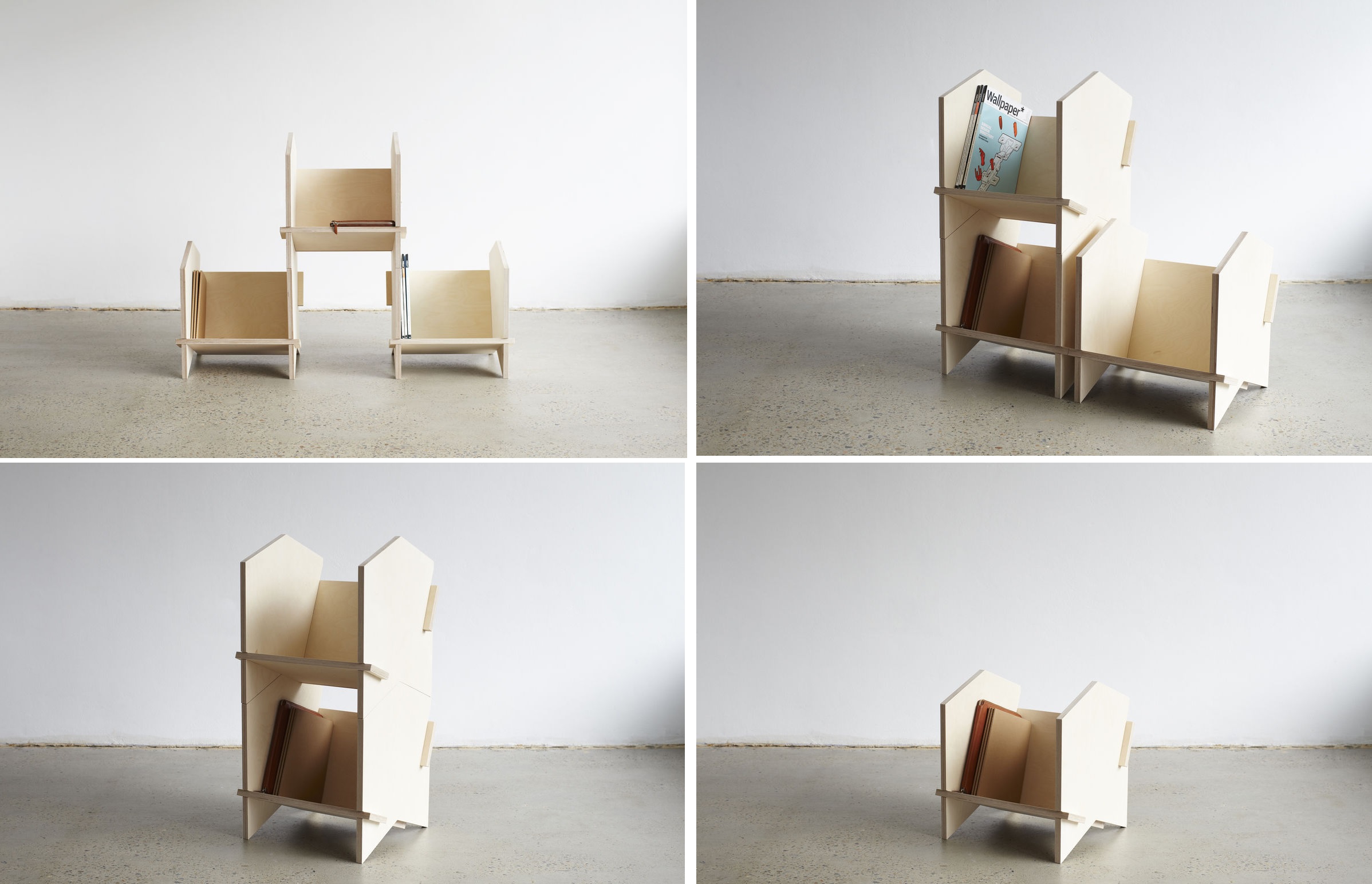 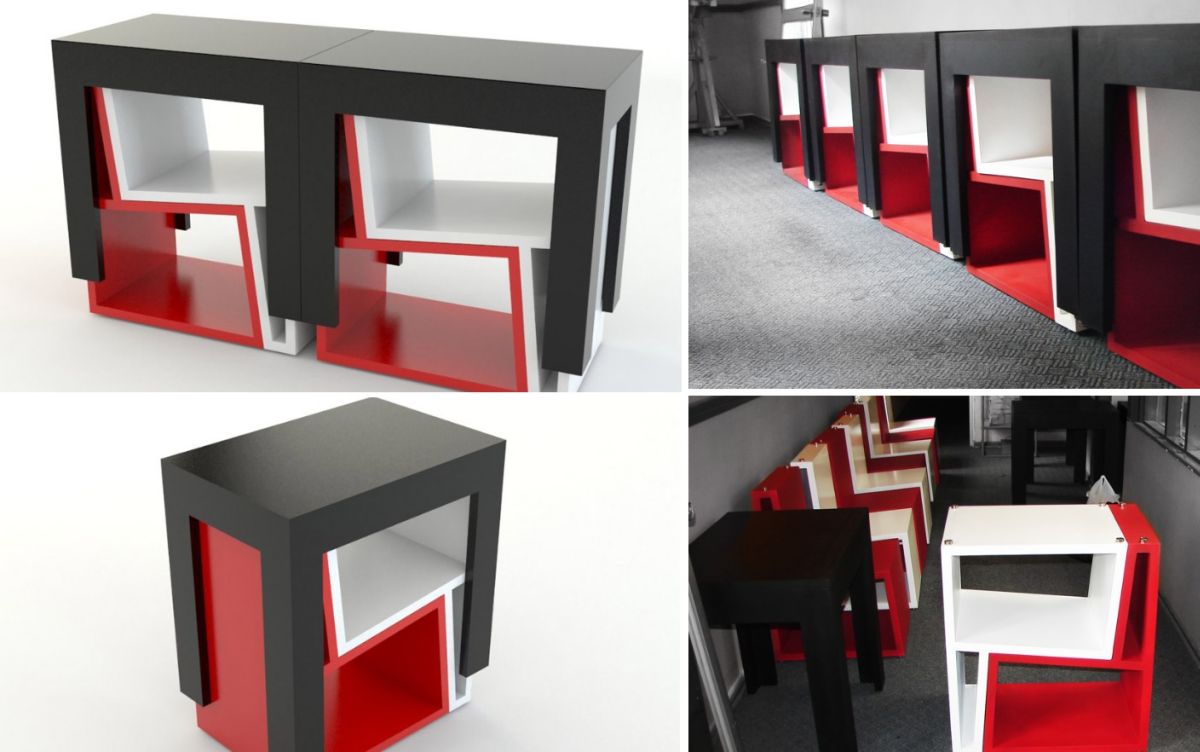 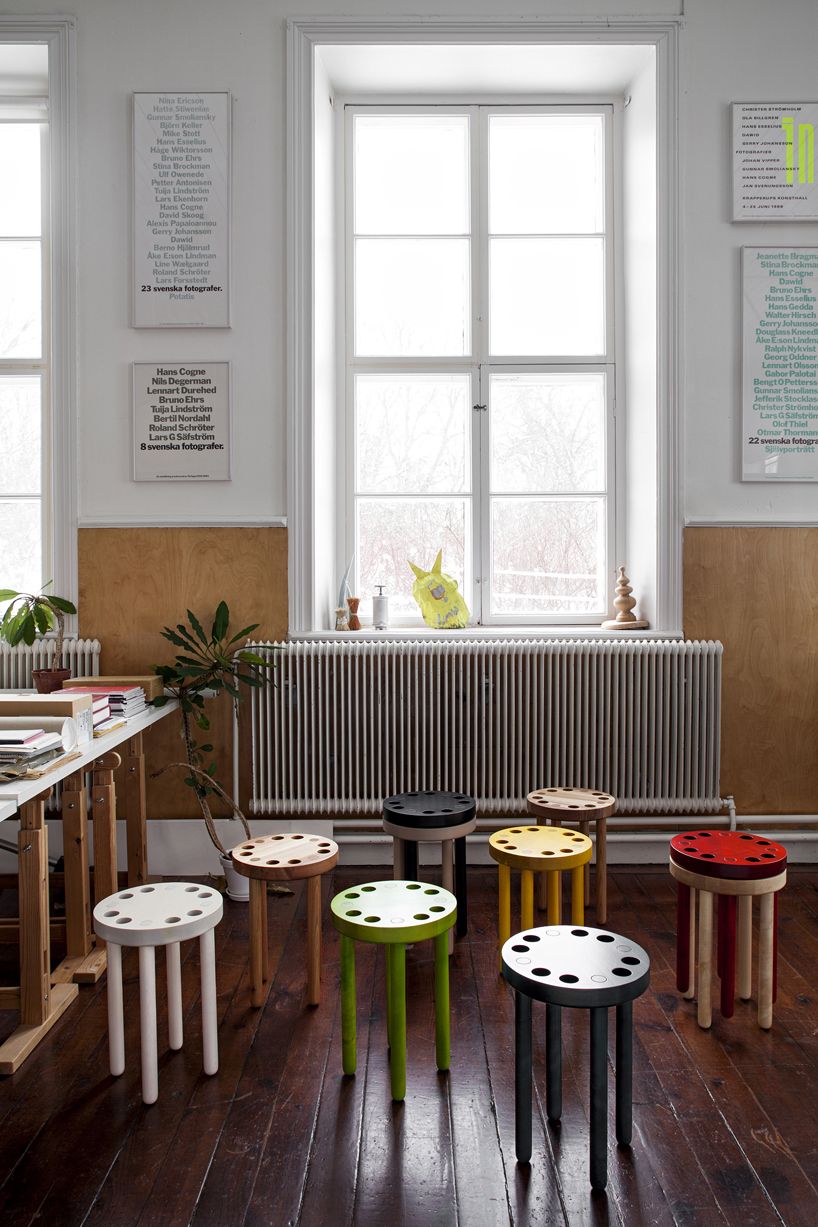 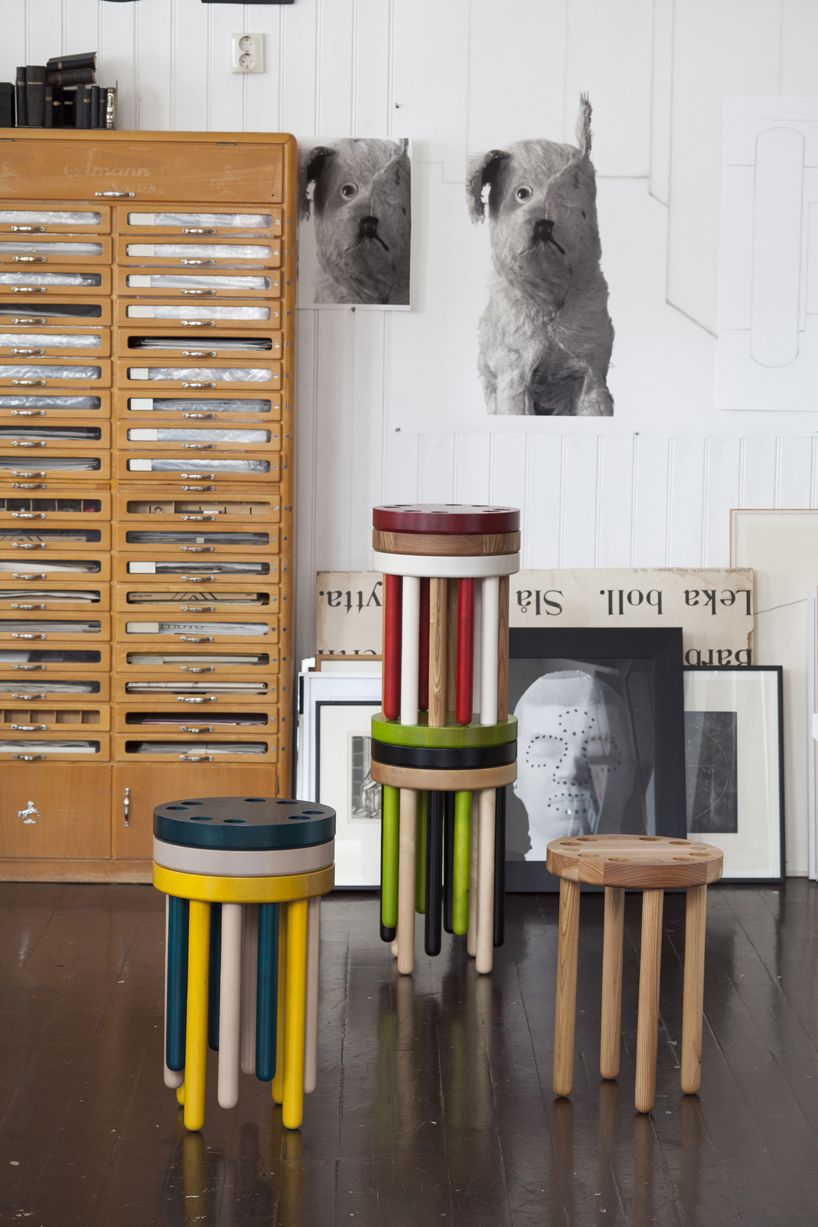 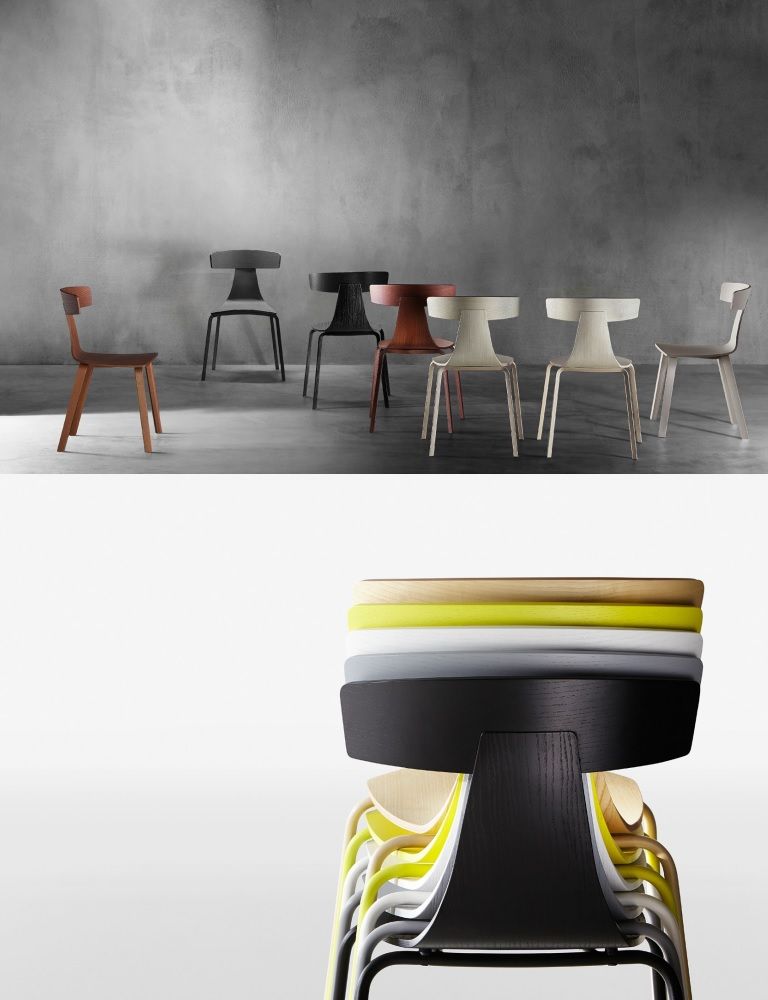 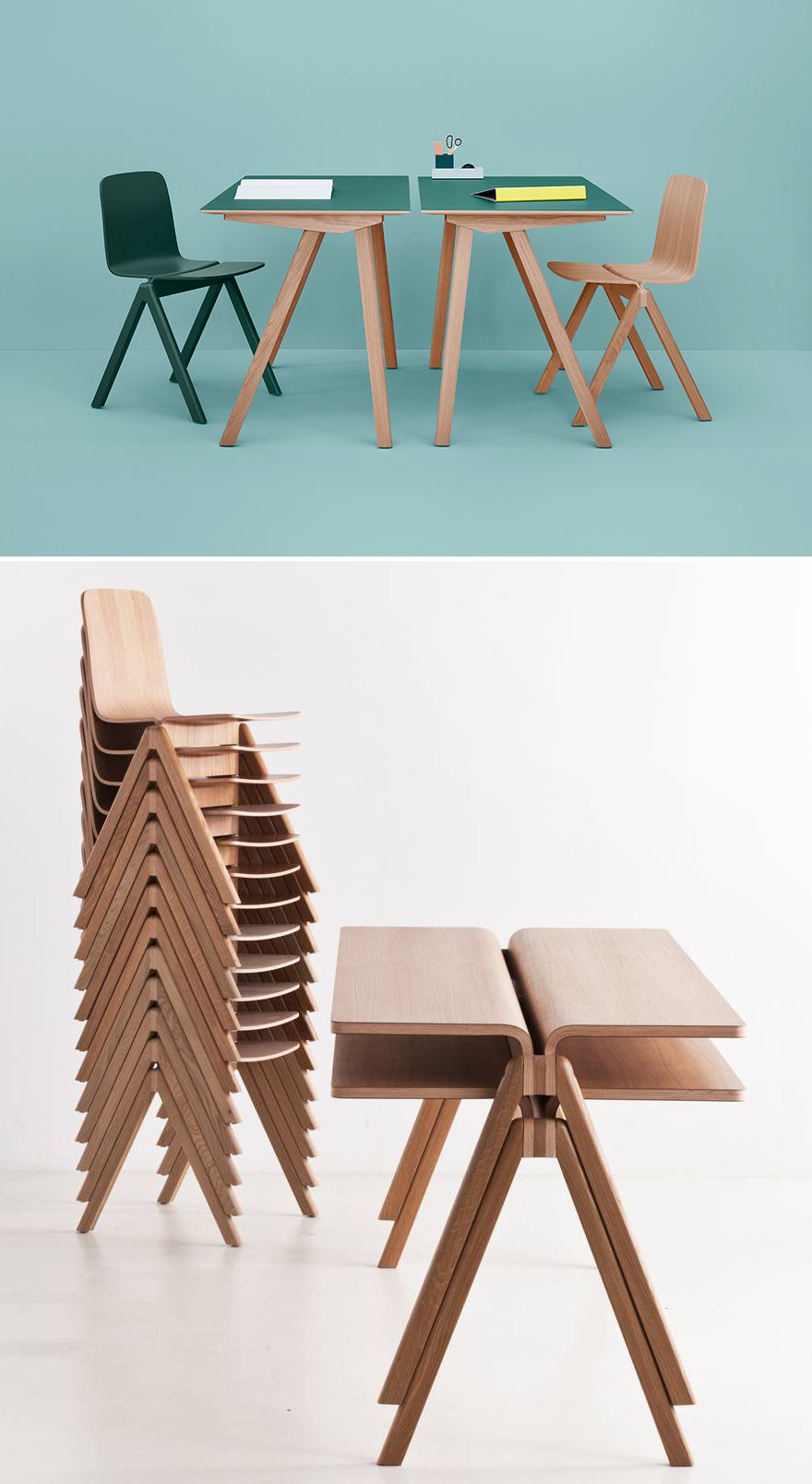 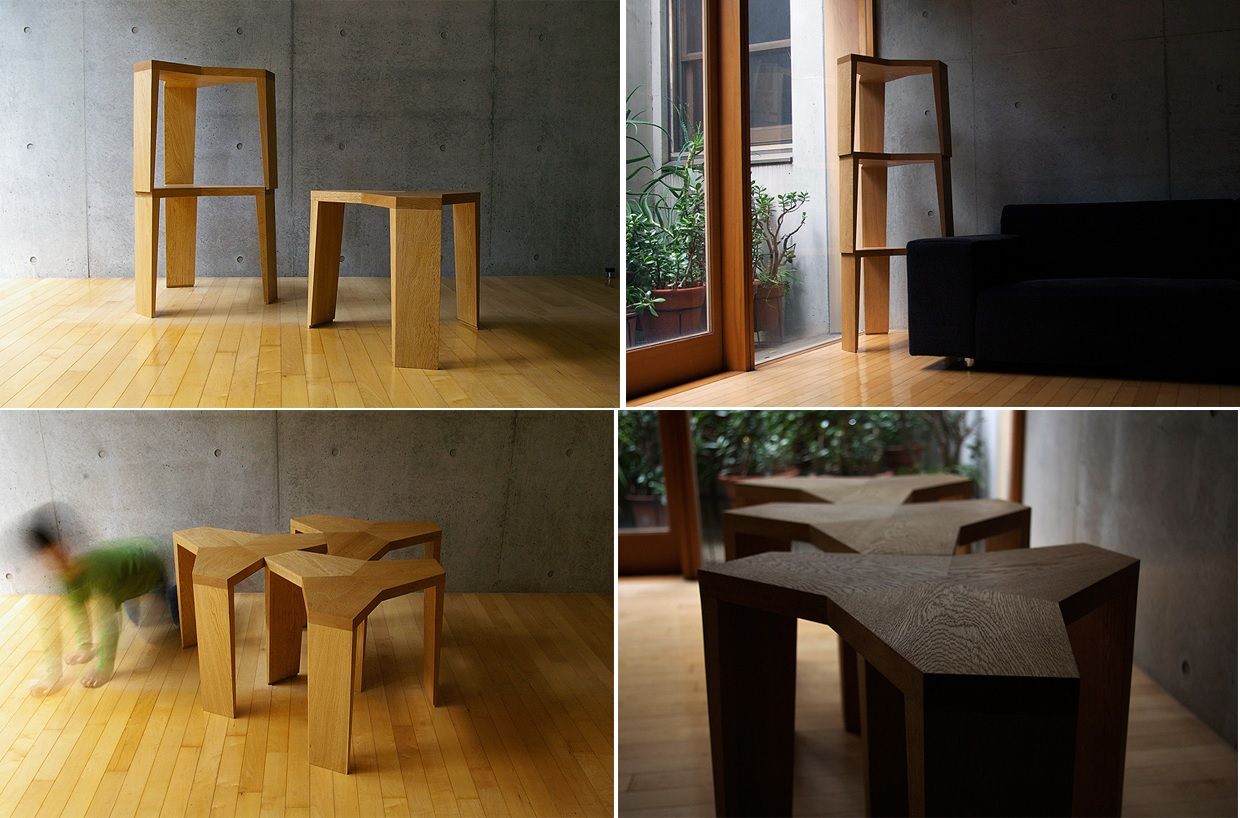 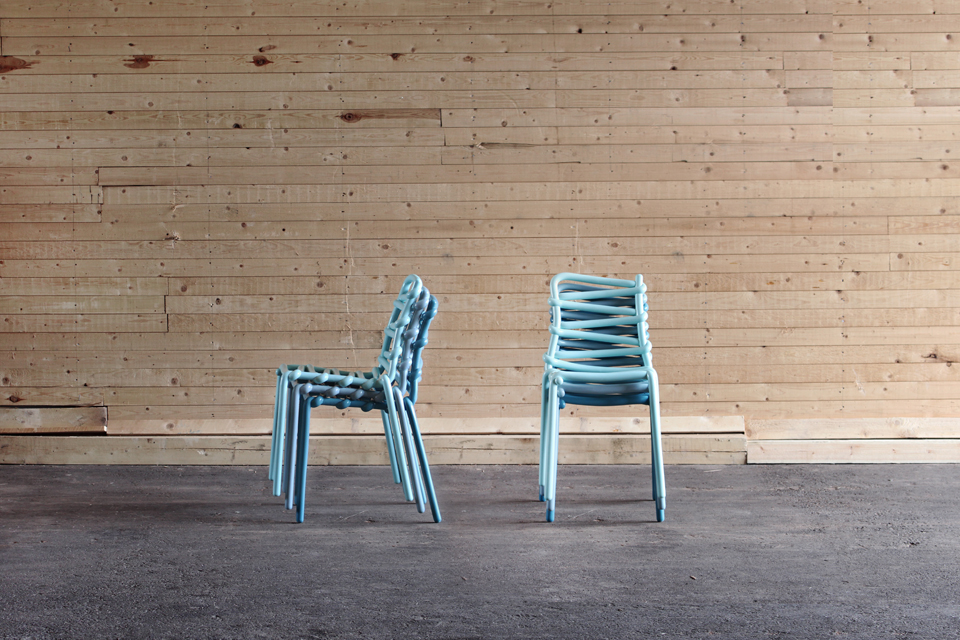 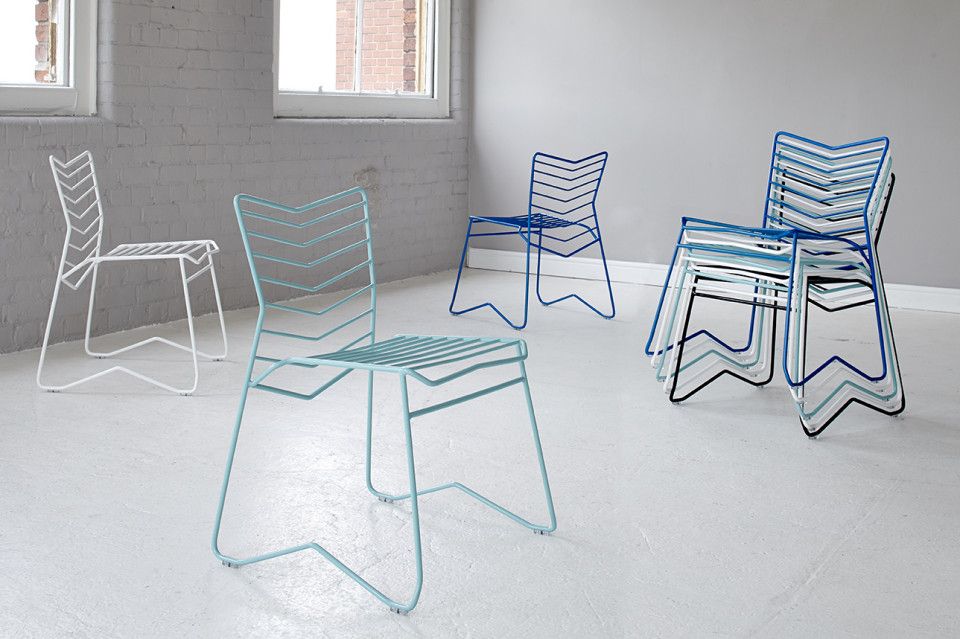 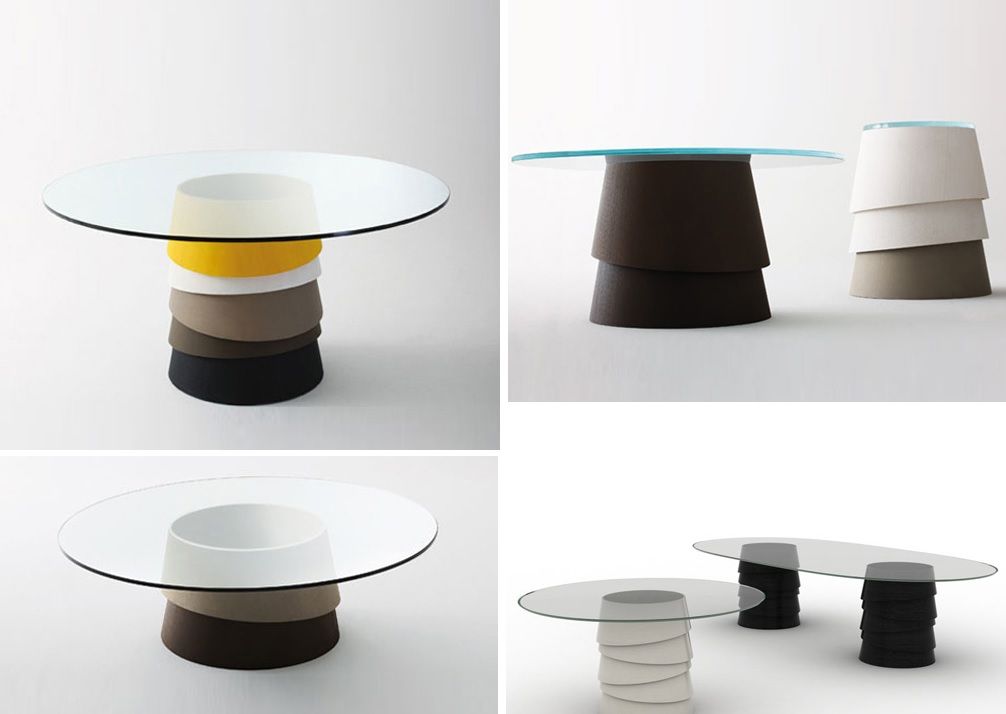 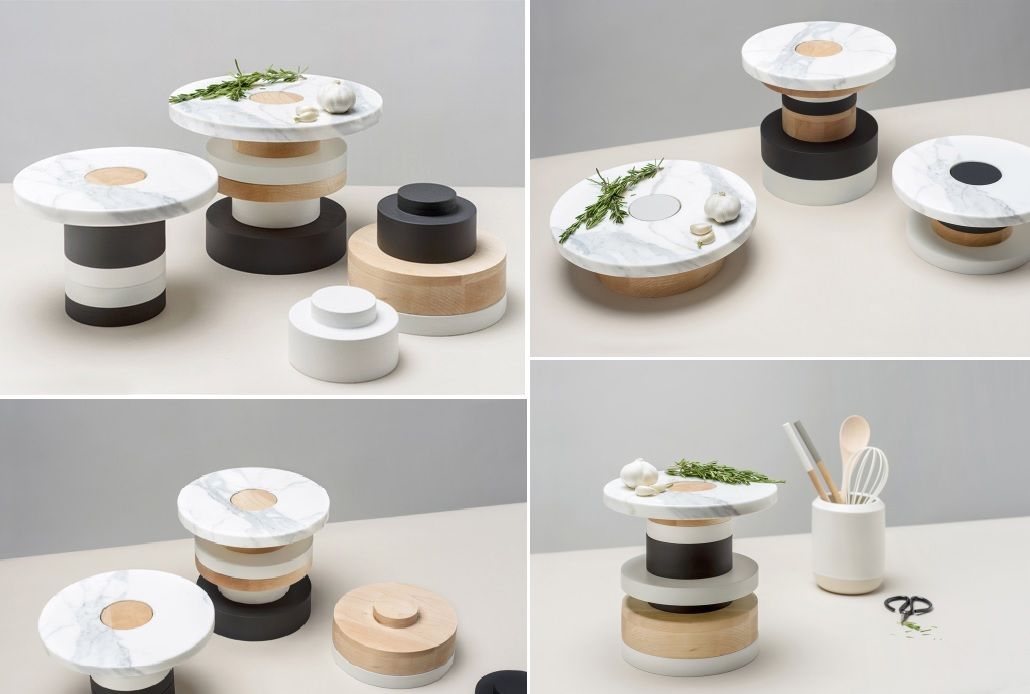 Whenever trying to save space or make room, we find ourselves stacking things one on top of the other. It’s the natural response to the situation and the most basic solution we can find. Inspired by this concept, furniture designers have come up with a variety of creations that allow us to do exactly that. It’s a category that includes stackable furniture of all types, all based on the same main concept.

The stackable Tree dressers are very ingenious for the simple fact that they offer a lot of freedom. Use them individually as stand alone pieces or use them in pairs of two, three or even four. You can stack them to save space in the room while gaining additional storage.

An interesting part of the Dror collection created for Target is the series of nesting/ stacking shelves which can be used to create a variety of structures and designs. Several of these sets can be put together into a bookcase although they can also be used separately in a lot of great ways as well.

Using a combination of simple cubes it’s possible to create a custom modular storage unit or bookcase. You can integrate such a piece in the living room, home office but also in the bedroom and a variety of other spaces. Thanks to the versatility and simplicity of the design, you can stack and combine these cubes in a lot of different ways.{found on behance}.

B_kube is a modular shelving system designed by Barcelona-based firm 5lab. Not only that it looks really attractive but the unit also allows for a multitude of configurations to be created. In addition to that, the cubes that form it can also be used individually as stools, side tables or storage containers.

Multifunctional designs are always appreciated by those living in small spaces. A pretty great example is Aleph, a simple cube unit created by Gyuyub Jo which can be used as a storage container, as a seat, a small table or which can be used in combination with several other identical pieces to create a larger storage unit.

Ever wished you could take apart your storage unit and rearrange all the drawers and shelves? Such a thing is possible thanks to designer Rianne Koens who created Otura, a series of stackable drawers which can be arranged in an infinite number of configurations.

The Chevron Shelves by Henry Wilson are stackable and feature a design that’s intriguing and eye-catching while also being really simple. Each shelf is made of four pieces of birch plywood. They can be used as single units or stacked in a variety of different configurations.

Studio Elementodiseno came up with Project UTFSM, a series of lounge chairs and tables that can all be stacked together like pieces of a puzzle, into one compact unit. When put together like this, they occupy very little space and can even serve as a display surface or workstation.

A piece of furniture that can serve as both a table and a chair can be really useful, especially in a small home. Tokotoko can be a good example in this case. It’s a compact unit which can be used as a side table/ nightstand, as a stool or even as part of a modular shelving unit thanks to its design which allows multiple identical pieces to be stacked.

It’s always useful to have a few extra chairs or stools for potential guests. But where do you keep them when they’re not needed? The Poke stool offers a simple and very practical solution. It has four round legs and eight holes in the seat and this allows several of them to be stacked. Also, interesting combinations can be created as well.

The Stacking Throne is designed by Studio Laurens van Wieringen and is a piece created for the little ones. The concept behind it it quite simple: as the child grows up, so does the chair. This piece is actually composed of five chairs of various sizes that can be filed up one on top of the other.

It’s hard to say how the AP chair looks better: as a single unit or a multi-layered piece. But one thing remains constant: the fact that this is an eye-catching as well as space-efficient design. The nesting stool was designed by Shin Azumi and is made of moulded plywood.

A piece of furniture doesn’t need to have a complex or very detailed design in order to be practical and space-efficient. In fact, the simpler the better. The Remo chair designed by Konstantin Grcic illustrates this idea beautifully.

The collection by Ronan and Erwan Bouroullec for Hay is intriguing for a variety of reasons. It includes a combination of wooden desks, tables, chairs and stools with simple and modern designs and which can be stacked and combined in a lot of great ways.

Naoki Hirakoso came up with an ingenious and stylish design for a piece called the Yata Stool. The three-legged stool has a very simple design which allows several identical pieces to be stacked in a stylish manner. In addition, several can be combined to create an interesting-looking coffee table.

The design of the Loop chair looks a bit sketchy and not figuratively. Markus Johansson gave it a toy-like appearance but didn’t neglect its functionality. This is a chair that’s comfortable, durable, resistant, easy to clean and stackable.

Sketchy is also a term that could describe the Kai chair by Daniel Lau Design. The piece is minimalist and has a certain sculptural charm that makes it stand out. Several of these chairs can be stacked to save space.

There are times when a coffee table is either too low or too high and when you wish you could change that. With Table Layer you can easily do that by adding or removing circular stackable wooden parts to its base. They come in different colors and finishes so you can also customize the table’s appearance.

PIÃ©DESTAUX by MPGMB looks like a collection of puzzle pieces. They can be mixed and matched to create sculptural tables. Use them in the kitchen, living room or anywhere you want and be creative.

A unique piece of furniture that occupies a lot of valuable floor space is the bed. The designed created by Rolf Heide proposes a bed that’s stackable. This means you could have two separate beds that function as individual pieces when needed but, the rest of the time, can be stacked to save floor space. This could be useful in guest rooms.

For the outdoor areas, Ego Paris offers a puzzle-like series which allows several lounge chairs to be put together like pieces of a puzzle, featuring a table at the core of the whole composition. The compact unit can be stored during winter without requiring a lot of space.