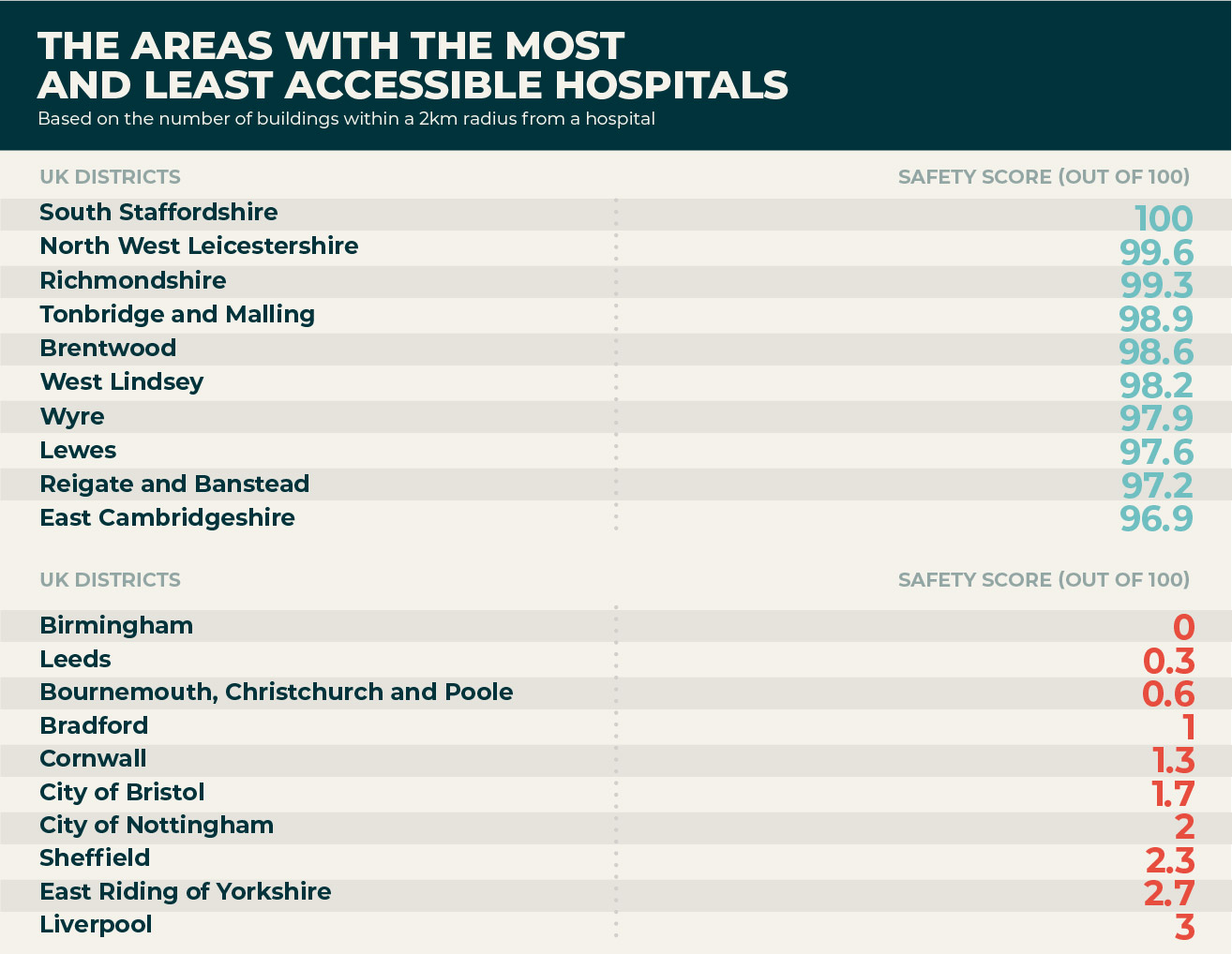 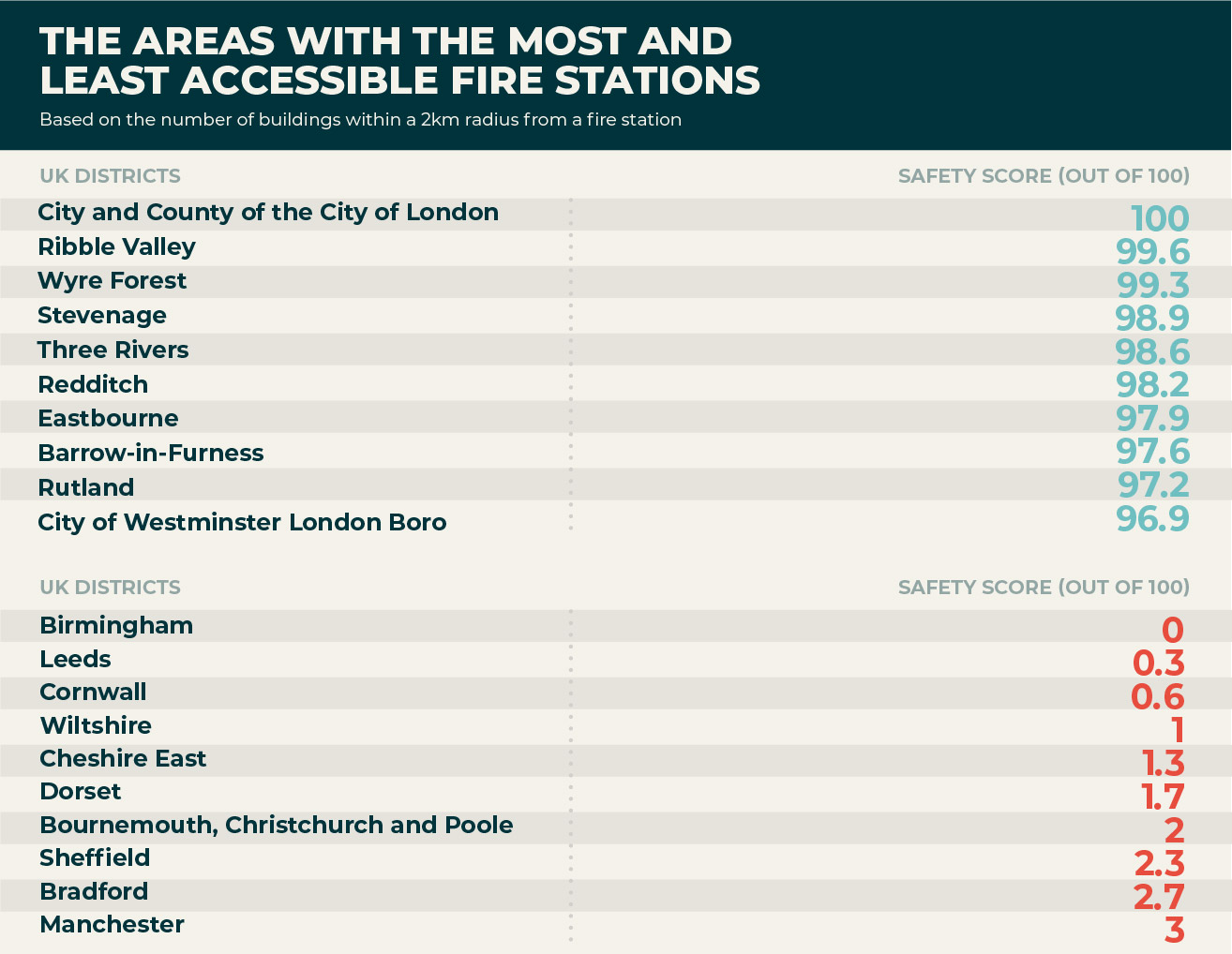 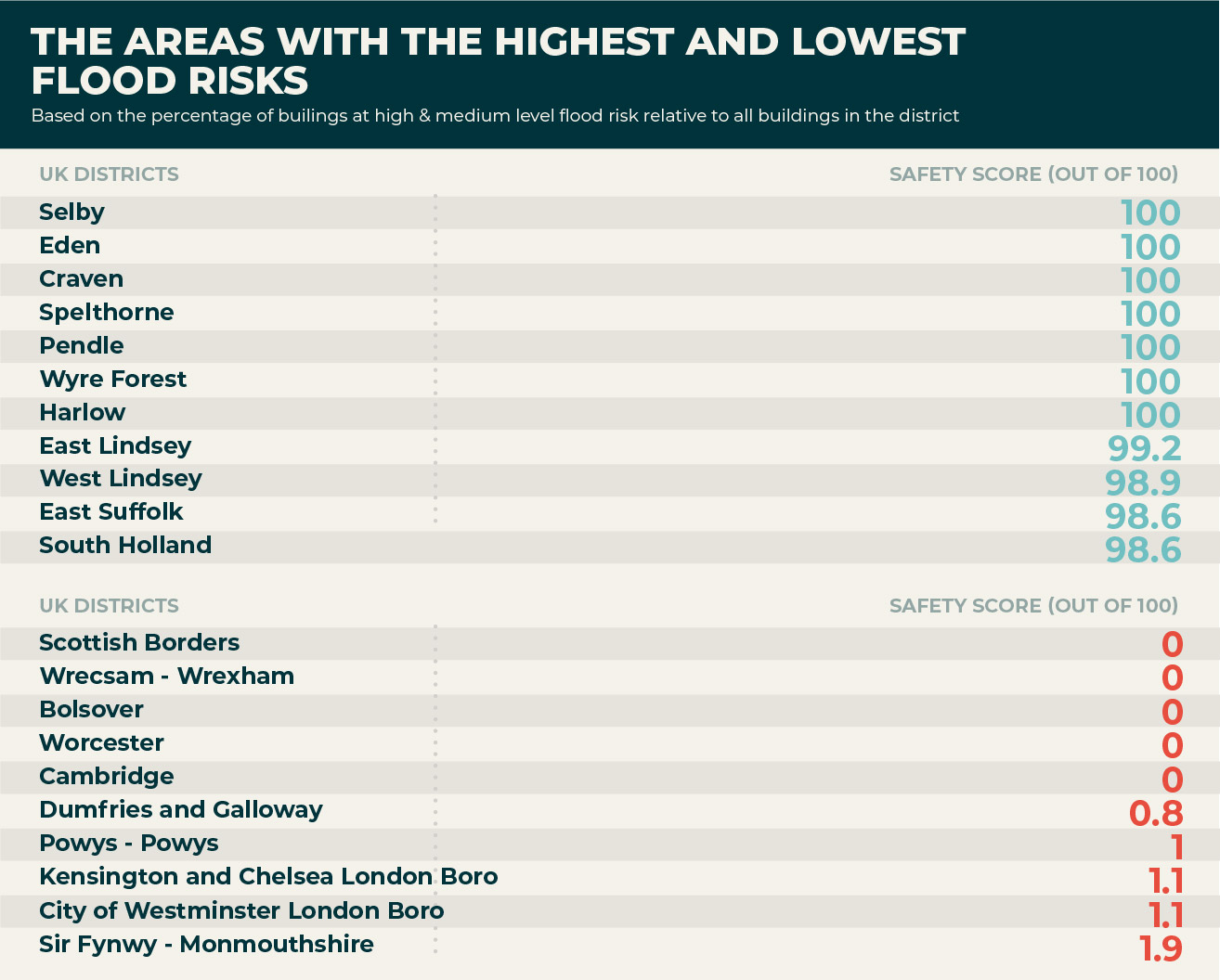 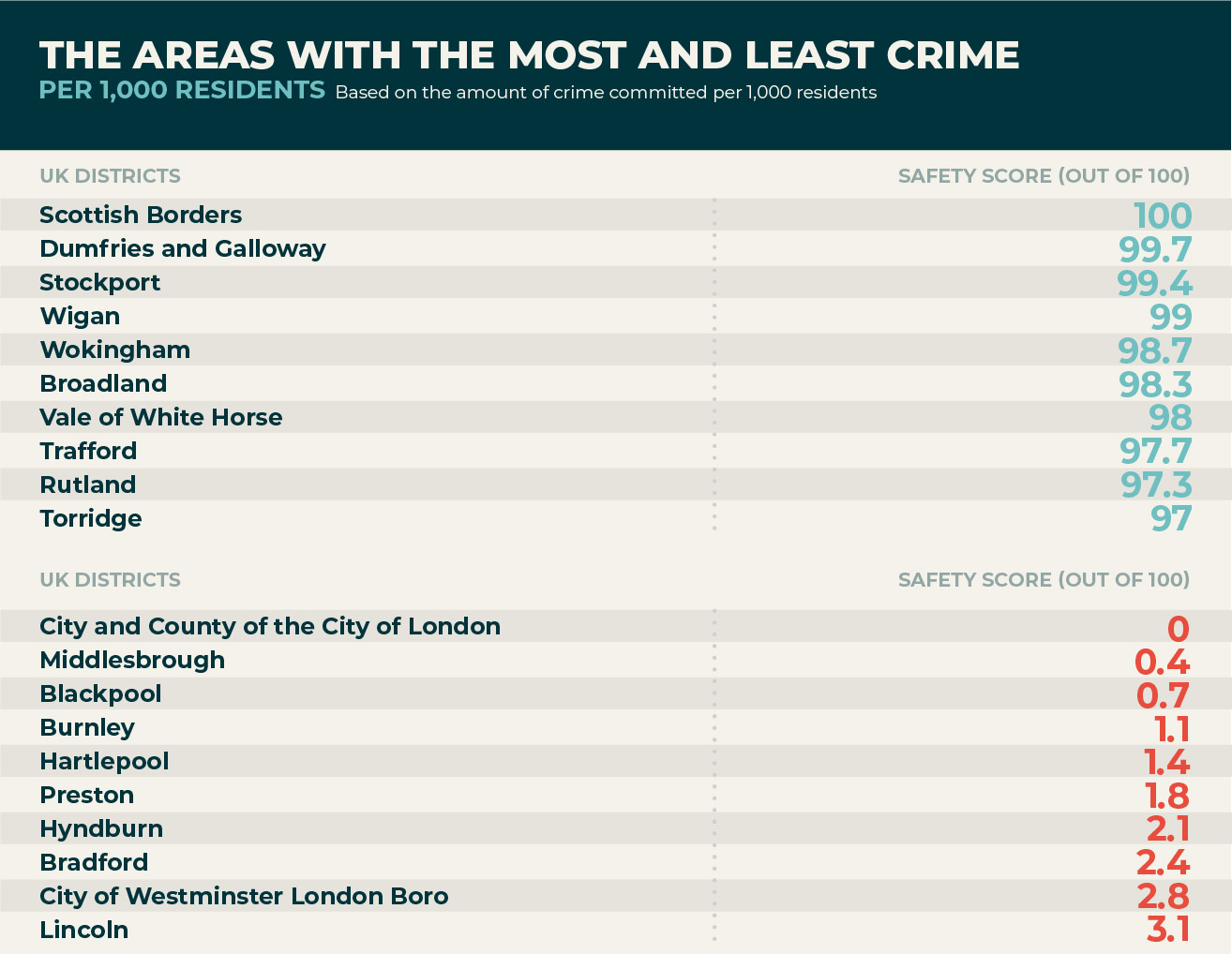 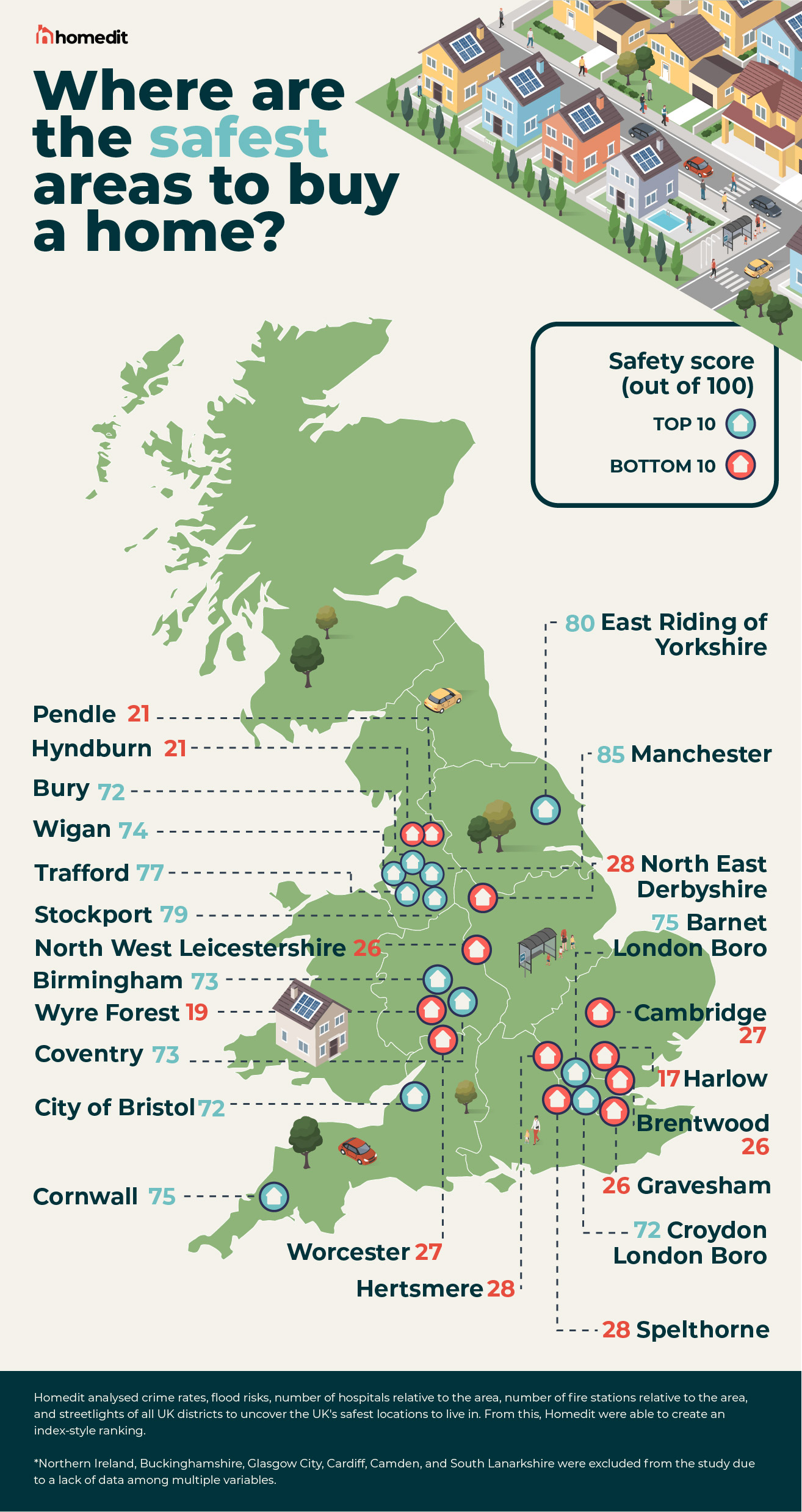 When it comes to buying a new home, location is a big consideration. Naturally, you will be analysing the house prices, the length of your commute, the transport links, the local schools, as well as amenities. But, above all, the most important thing to consider is how safe the area is. Is crime rife in the area? Is the location prone to severe weather events, like flooding?

To determine the safest areas to live in the UK, we analysed the following five key factors in each district in the UK:

From this, we created an index-style ranking system, giving each factor a score out of 100, and uncovered the UK’s safest (and unsafest) locations to reside in the UK for each factor and overall.

Which area is the safest to buy a home?

We can reveal Manchester is the safest area to buy a home in the UK, with an overall safety score of 85 out of 100 in our study. With one of the highest streetlight expenditures in the UK, the district fell short of full marks due to having one of the highest building to fire station and hospital ratios.

Following closely behind with a score of 80 out of 100 and ranking in second place is East Riding of Yorkshire. Alongside Manchester, the district also scores highly for streetlight expenditure and also has a low crime rate, making the area one of the safest to live in the UK.

Unsurprisingly, due to its proximity to first place, is Stockport situated in Greater Manchester. We found the district is the third safest area to live in the UK with a safety score of 79 out of 100, predominantly due to its high streetlight expenditure, low crime and flood risks.

A breakdown of each factor

Which areas have the lowest crime rates?

Low crime rates are a top priority for virtually every homeowner, but which area is the safest of all?

With an impressive crime rate of just 0.02 per 1,000 residents, the Scottish Borders is the safest district in the UK when it comes to crime, scoring an impressive safety score of 100 out of 100. The Scottish district reported zero crime offences between 2018 and 2021, resulting in the lowest crime rate across the UK. Following closely behind is fellow southern Scottish district, Dumfries and Galloway, with a crime rate of 0.08 per 1,000 residents in the area, and a safety score of 99.7 out of 100.

The third safest area based on crime rates alone is Stockport, in Greater Manchester, with a rate of 15.49 per 1,000 people and an almost perfect safety score of 99.4. Despite a rise from places first and second, Stockport’s crime rate is still low, especially compared to the City of London with 178.14 crimes per 1,000 residents, making it the area with the most crime in the UK.

Middlesbrough and Blackpool are also among the areas with the highest levels of crime per 1,000 residents. We can reveal Middlesbrough, based in North East England, has a crime rate of 51.93 per 1,000 people, followed by Blackpool, on the North West coast, with 51.36, resulting in a safety score of less than one out of 100.

Which areas have the lowest flood risks?

The UK has been hit with several natural disasters over the years, including heavy rain and flooding. As the climate crisis accelerates, we can expect even more severe weather events and damage to our homes. But which area is safest and least prone to flooding?

We can reveal Dumfries and Galloway have the least chance of floods, with just 0.01% of 71,886 properties in the area at risk of medium to high-level flooding. As a result, the district has received a perfect safety score of 100 out of 100.

The London boroughs of Southwark and Kensington and Chelsea are also among the districts least prone to flooding, with both areas having a risk of just 0.03% and receiving a safety score of 99.7 and 99.4 out of 100, respectively. Interestingly, of the top 10 districts at least risk of flooding, six are situated in London, suggesting that the English capital is one of the safest areas when it comes to flooding.

On the other hand, 53.38% of properties in Eden in Cumbria, North West England, are at risk of medium to high-level flooding and, therefore, the most prone to severe weather events, resulting in a safety score of 0 out of 100. The North Yorkshire district of Craven follows with 42.01% of the 20,858 properties in the area prone to severe flooding, and the North-Eastern district of Northumberland with 38.44% of 94,512 buildings at high risk of floods. Each of these districts has been awarded a poor safety score of 0.4 and 0.7 out of 100, respectively.

Which areas have the most accessible fire stations?

In case of emergencies, living near a fire station can be very handy, should you need help putting out a fire or require rescuing. So, we investigated which areas have the most properties within 2km of a fire station to determine which district is most likely to receive help the quickest.

The area with the least number of buildings within a 2km radius of a fire station is the City of London, with 2,893, resulting in a score of 100 out of 100 for safety. However, this could be explained due to the City of London being a very small area, covering only a square mile and with a very small resident population (8,000).

However, Birmingham has the most properties within 2km of a fire station, amassing almost 90,000 buildings. As a result, the district has been awarded a score of 0 out of 100. Not far behind is Leeds, with 73,023 buildings within a 2km radius, and Cornwall, with 66,708 buildings. Both districts, therefore, score just 0.3 and 0.6 out of 100, respectively.

Which areas have the most accessible hospitals?

Accidents happen and when they do, being near a hospital is favourable to ensure you have access to the help you need as soon as possible. Therefore, as part of our safety index, we investigated which areas have the most properties within 2km of a hospital if you need to visit and receive expert treatment.

Our analysis shows residents in South Staffordshire are most likely to receive help promptly as there are just 541 dwellings within a 2km radius of a hospital. As a result, the district has a safety score of 100 out of 100, meaning it is the safest area for hospital care in the UK. However, this is a far cry from nearby Birmingham, where there are 69,681 properties within a 2km radius of their local hospital, resulting in a safety score of 0.

North West Leicestershire follows South Staffordshire, with a safety score of 99.6 out of 100 as there are 1,429 properties within a 2km radius of the district’s local hospital. Richmondshire, based in North Yorkshire, comes next with 2,034 buildings within 2km of hospitals and a score of 99.3.

Similarly to Birmingham, other notable UK cities with a high property to hospital ratio include Leeds, Cornwall, Bristol, Nottingham, Sheffield, and Liverpool. In particular, Liverpool has 36,757 buildings within a 2km radius of hospitals, which may explain why the CQC recently said Liverpool hospitals are not treating patients quickly enough, resulting in “overcrowding and delays”.

Which areas spend the most money on streetlight maintenance?

Over the years, many councils have decided to cut streetlight spending in order to save money, however, this can cause safety concerns among residents. As a result, to identify which districts regularly repair their streetlights to ensure they are in working order, we analysed how much money each district spends on streetlight maintenance between 2019 and 2020 – the more they spend, the safer they are.

Despite having a high property to hospital ratio, the district of Birmingham comes out on top, with streetlight expenditure racking up to £24,317 and a safety score of 100 out of 100. Spending just £4,000 less than Birmingham is Leeds, with streetlight expenditure adding up to £20,241 overall between 2019 and 2020 and a safety score of 99.6 – the second highest in the UK. Despite spending £15,884 less than its neighbour, Birmingham, in first place, Coventry is still among the top three safest streets in the UK with a score of 99.3 out of 100.

Out of 295 districts studied, we can reveal that 107 didn’t spend a single penny on streetlight maintenance in 2019 and 2020. Some of these districts include Sunderland, Brighton and Hove, St Albans, Woking, Mansfield, Guildford, Gloucester, Hertsmere, and Cambridge, to name a few.

How to find the best place to live?

Deciding on a new area to settle in is challenging and one of the most important decisions you will make. Get it wrong, and you will be unhappy or having to face the costs of moving once again.

This is why it is crucial that you thoroughly research the area you’ve pinpointed. The more likely you are to find somewhere you love that ticks (most) of the boxes, the less likely you will be to leave.

Here are some things to ask yourself:

Once you have considered each of these points, you’ll soon know if the area is right for you.

The full dataset can be found here.