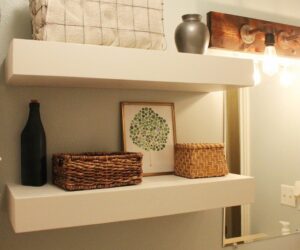 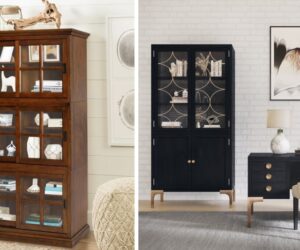 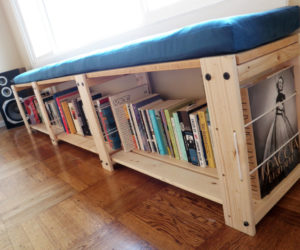 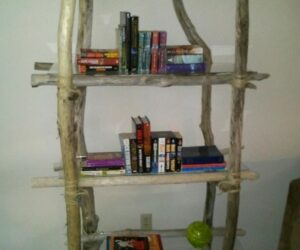 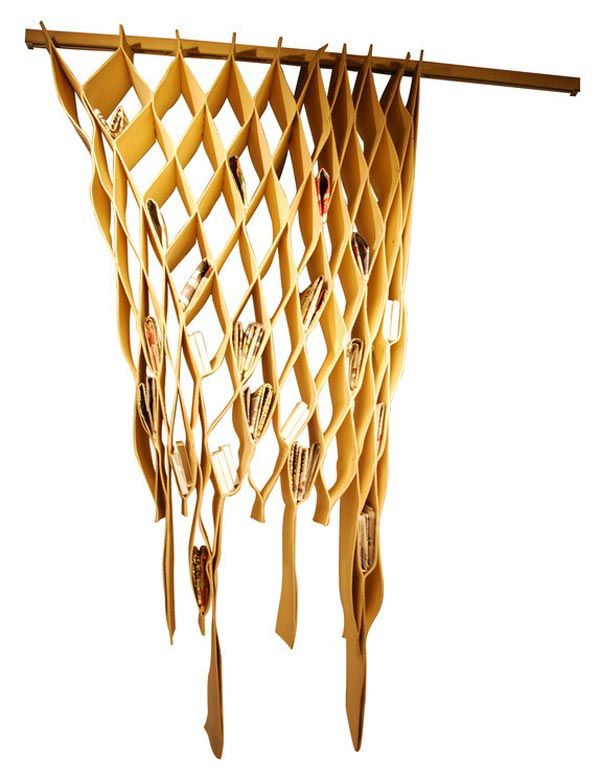 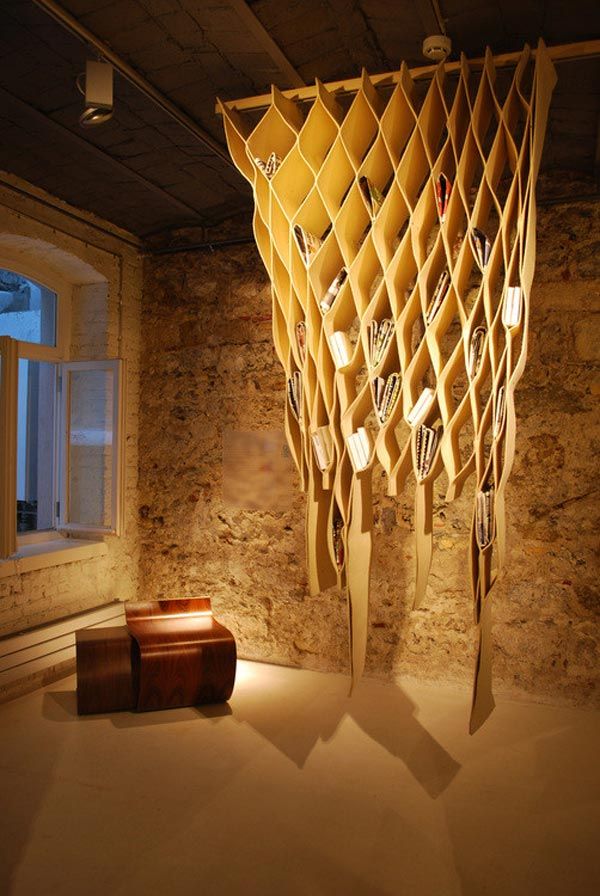 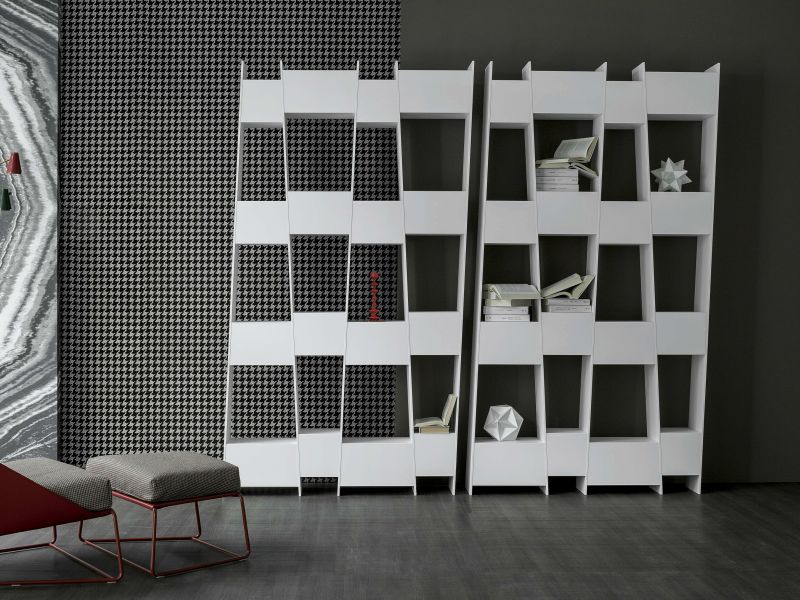 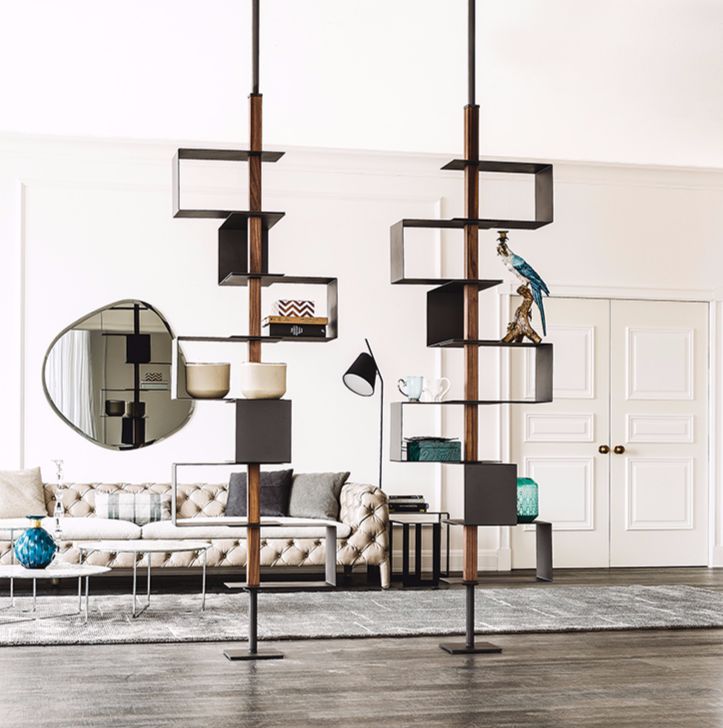 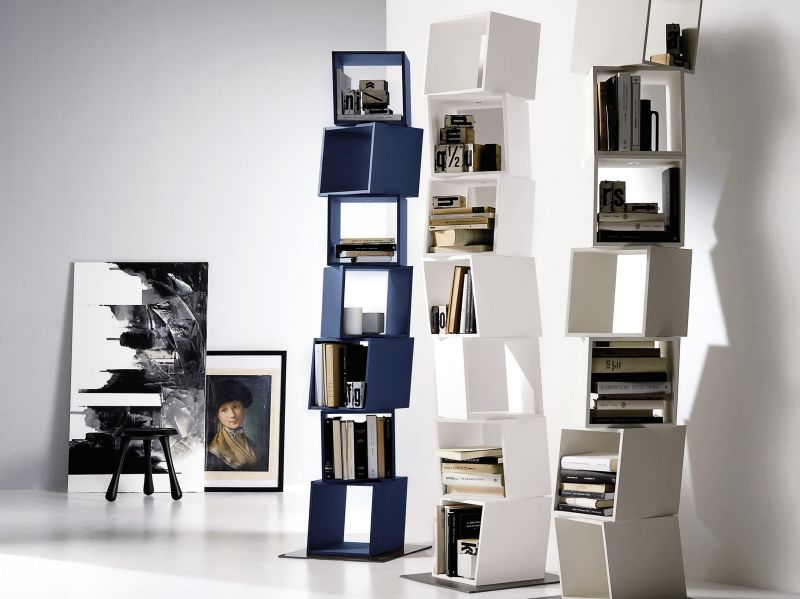 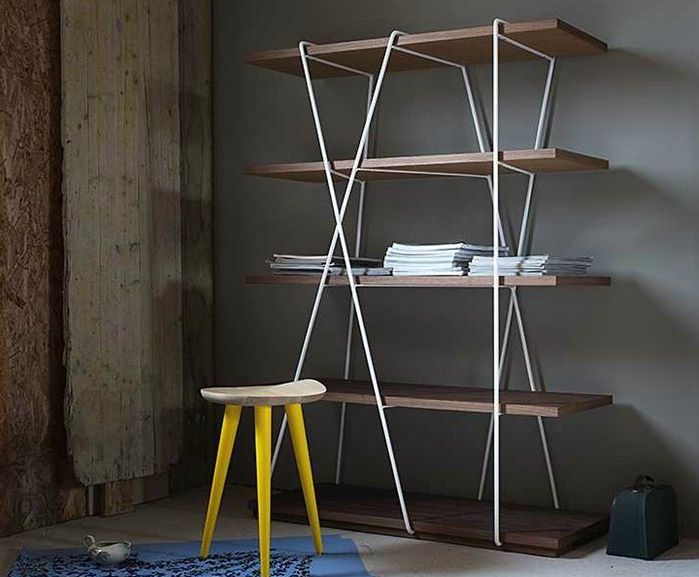 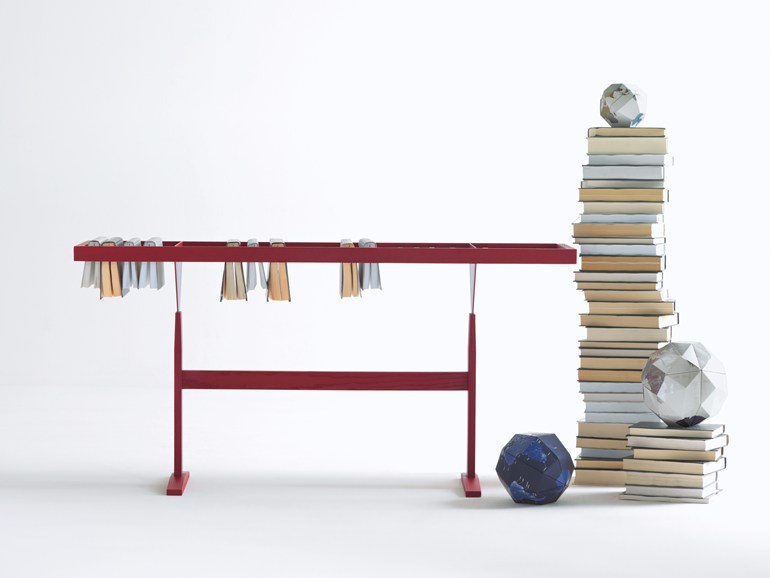 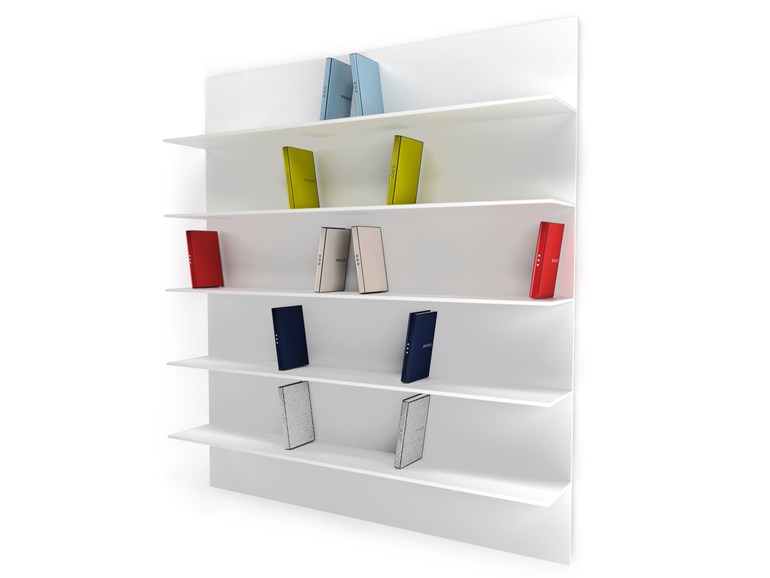 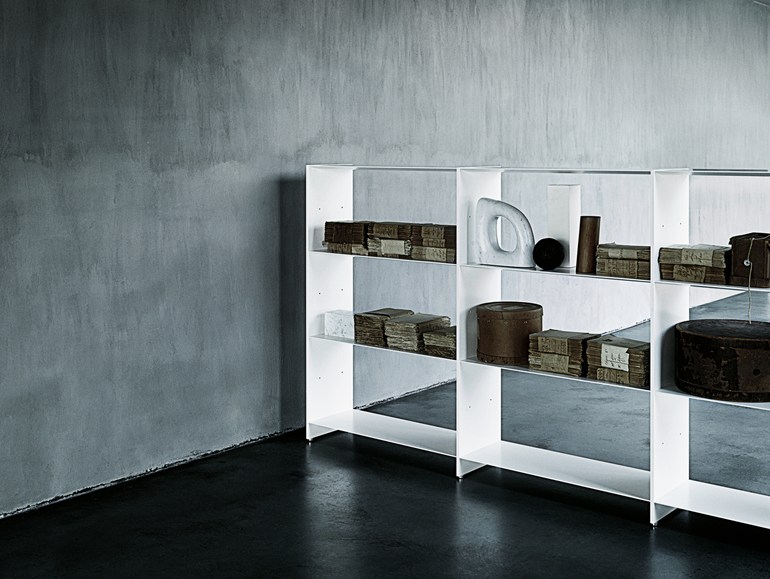 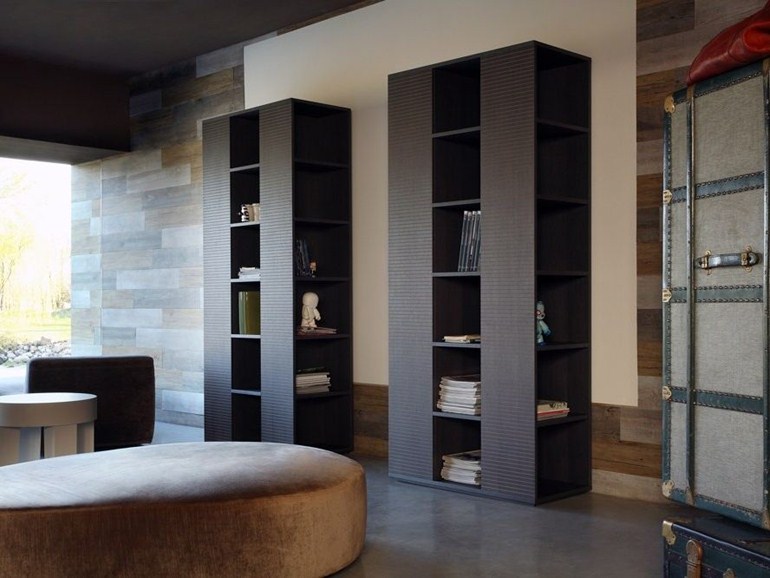 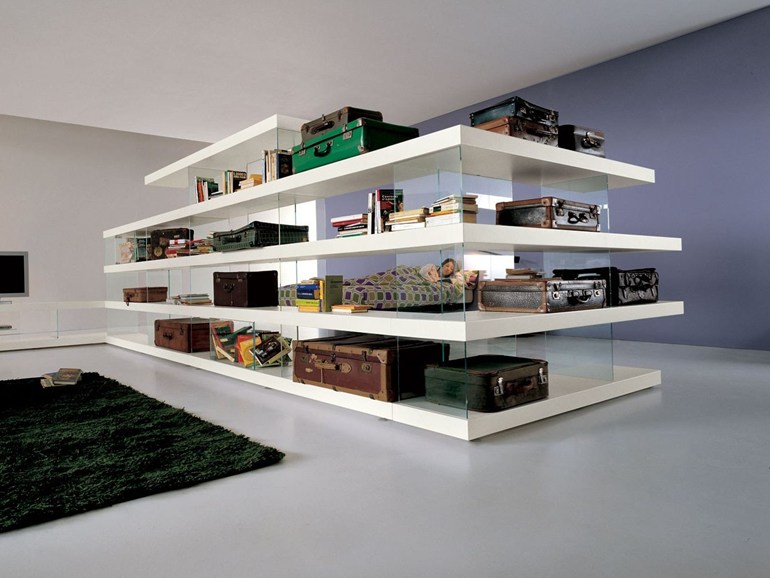 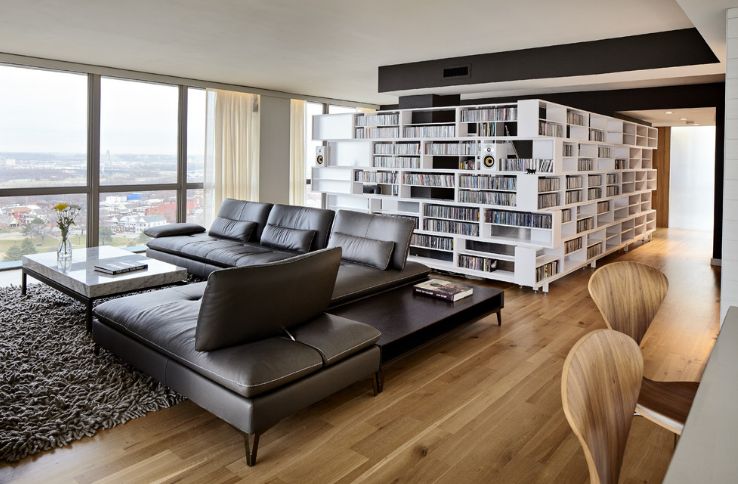 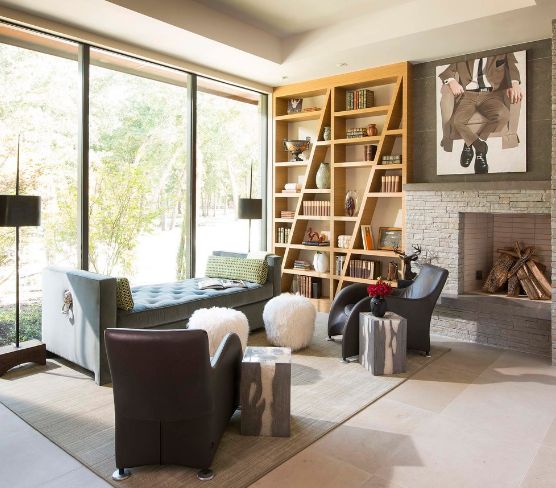 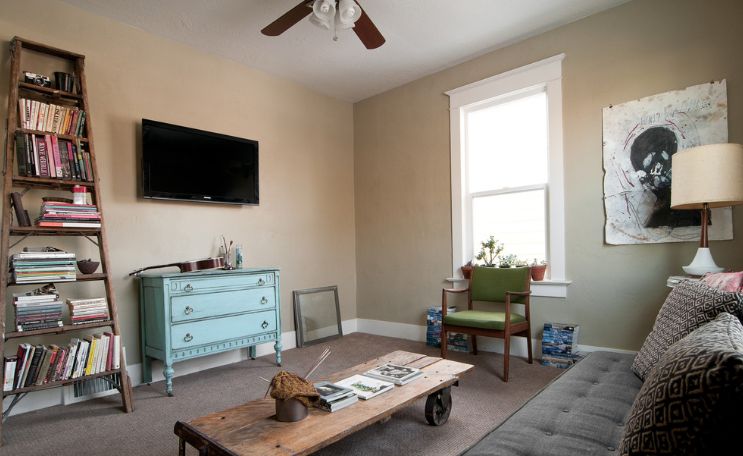 A bookcase is not exactly the statement piece you want for your living room, library or any other space. But that’s only true if you opt for one of the standard designs which doesn’t really stand out in any special way. If you choose something a bit more unique such as one of the cool bookcase we just found things are not the same. Not only are these bookcases cool and eye-catching but they also blend form and function in wonderful and unexpected ways.

The Bookwave hanging storage is the perfect piece to start with. It combines three unexpected functions into one amazing design. By that we mean you can use it as a bookcase but also as a room divider and, thanks to its unique design, an unusual curtain. It hangs from a rod just like a regular curtain and it can be expanded as much as needed, revealing a honeycomb pattern with small compartments for books.

Create an interesting visual effect with the Tilt bookcase. Designed by Giuseppe Vigano, this piece is composed of alternating blocks and voids arranged in an asymmetrical and casual manner which offers the unit a dynamic look. The unit appears to be tilted but it actually has a very stable structure. It’s quite the eye-catching piece, perfect for a minimalist interior.

The days when a bookcase had to be placed against a wall for stability are long gone, especially when we have designs such as the Tokyo created by Andrea Lucatello. The bookcase is supported by a pole that connects the floor and the ceiling and has a series of geometric compartments distributed along its surface.

If you like the idea of creating interesting visual effects with furniture that’s asymmetrical or tilted, then the Rubik would be perfect for your home. It’s a vertical bookcase shaped like a tower of individual boxes, each placed at a different angle and with a slightly different shape than the others. The tower is balanced even though it might not show it. Also, this is a modular unit which can be made up of a maximum of 7 cubes.
Of course, a bookcase doesn’t necessarily need to be tilted or oddly shaped in order to be cool or interesting. Some designs are quite simple and one of the examples we can give here is the Matassa bookcase. It was designed by Luigi Semeraro and is supported by a system of thin rods that intersect to give the unit a geometric look. The shelves are simple and available in a variety of finishes and colors.
Open bookcases are popular in modern interiors because of their simplicity and the fact that they keep the décor open and airy. The bookcase called Help is a bit more than that because it also adds a subtle industrial touch to the space. At the same time, it also looks a bit rustic. The bright colors, on the other hand, give it the striking look necessary to stand out and become a focal point in any type of setting.
Booken is quite the quirky bookcase. It’s a piece designed by Raw Edges and it’s a new and unusual interpretation of the concept. It combines three functions in one intriguing form. Use it as a table, as a wall-mounted shelf or as a freestanding bookcase. This is a piece that reinvents itself every time you decide to change its function.
The Direttore bookcase plays with our minds, featuring a design that seems to defy gravity. Actual books are an important part of the structure itself, leaning at odd angles and giving the unit a playful look while also adding color to the space. This is a piece designed by Paul Cocksedge and it’s a wall-mounted unit.

With the Fill bookcase you have the freedom to control the size of the unit thanks to its modular and versatile design. It has an aluminum frame with side panels, shelves and back panels also made of metal. It has adjustable feet with which to control the height and because it’s quite small, several units can be put together to form a larger module.

There are also designs which don’t really stand out in a striking way but which are interesting nonetheless. One such example is the Volterra bookcase. It has 12 wooden shelves and a design that’s simple and elegant. It offers a combination of front and side compartments which can be used for book collections as well as decorative items.

Some bookcases impress with their size. Air is one such example. It’s an open bookcase that appears to be quite massive but which also has a light and open design. The thick and heavy shelves contrast with the glass panels which add transparency and lightness to the design. The best way to use this piece is as a space divider or a freestanding unit in a large room.

Of course, if you think a massive bookcase would suit your living room nicely, a custom design would be best. An interesting idea is to use bookshelves to cover a partition between two spaces or to conceal a smaller volume inside a large room.

Bookcases, regardless of their type and design are perfect furniture pieces for reading areas. Save space with a wall-mounted bookcase and add a comfortable daybed, a small sofa or an armchair. A lamp will complete the whole arrangement.

A small bookcase often also completes a living room or family space. It’s something to look at and also a great place to display things on. Match it to the rest of the décor and look for a design that’s simple but also has something special that makes it stand out. It doesn’t have to become a focal point of the room. it’s enough to avoid looking boring.