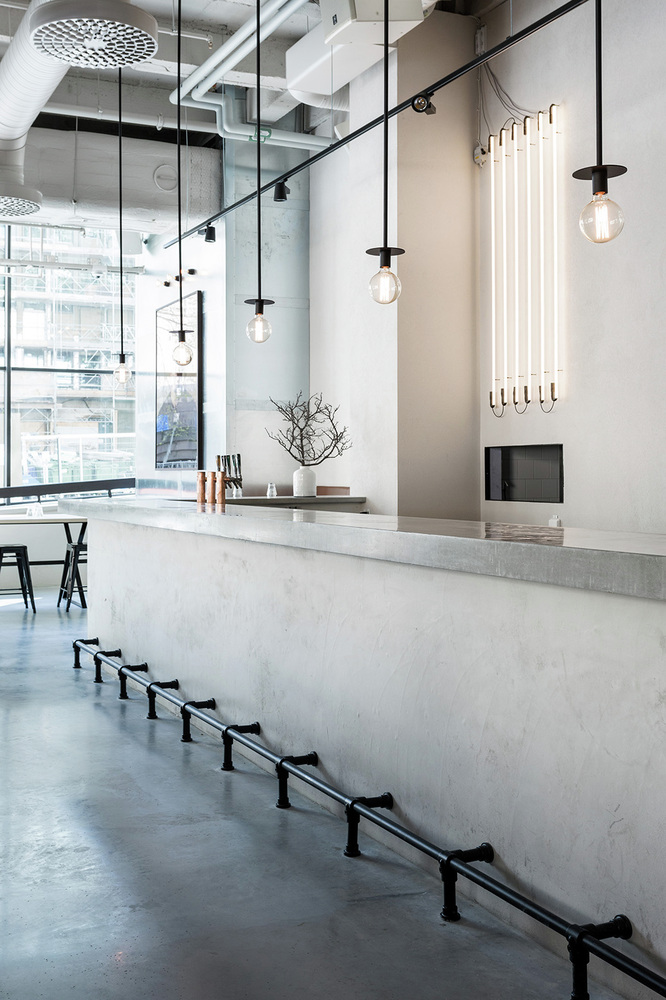 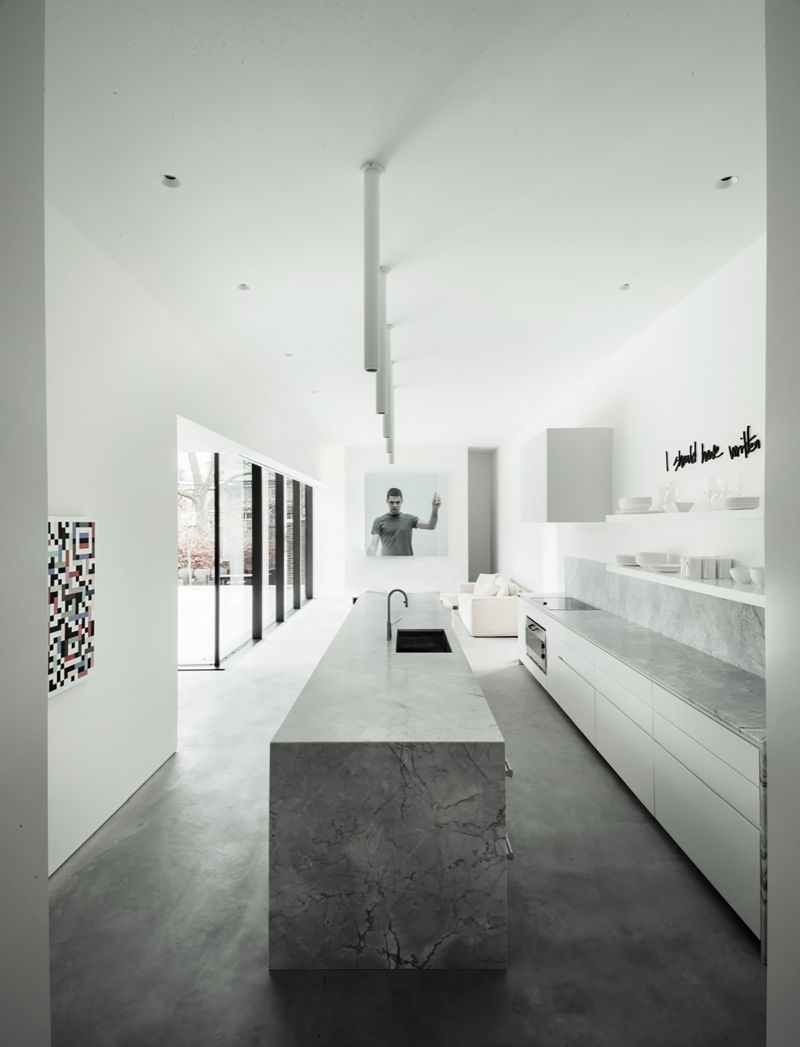 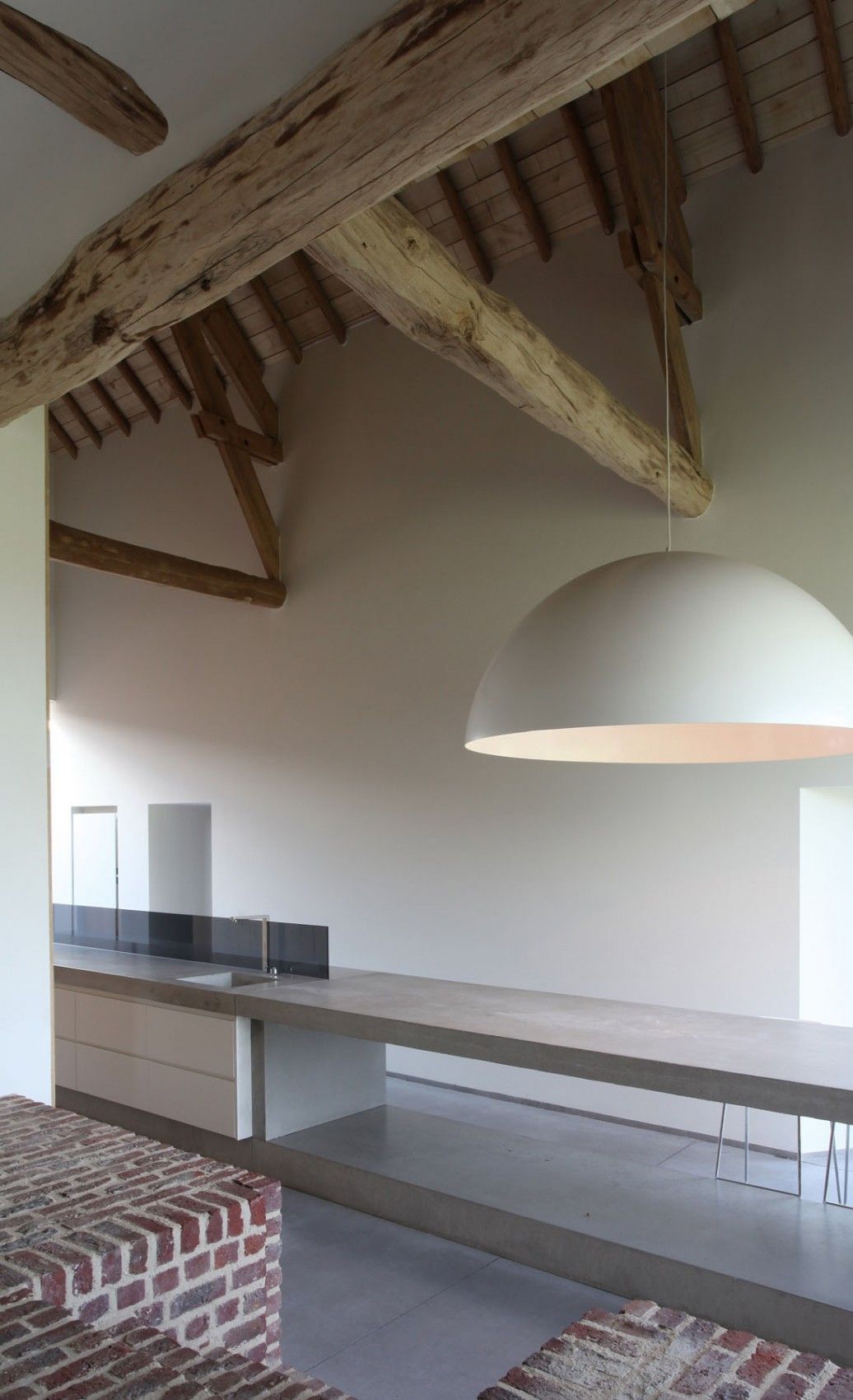 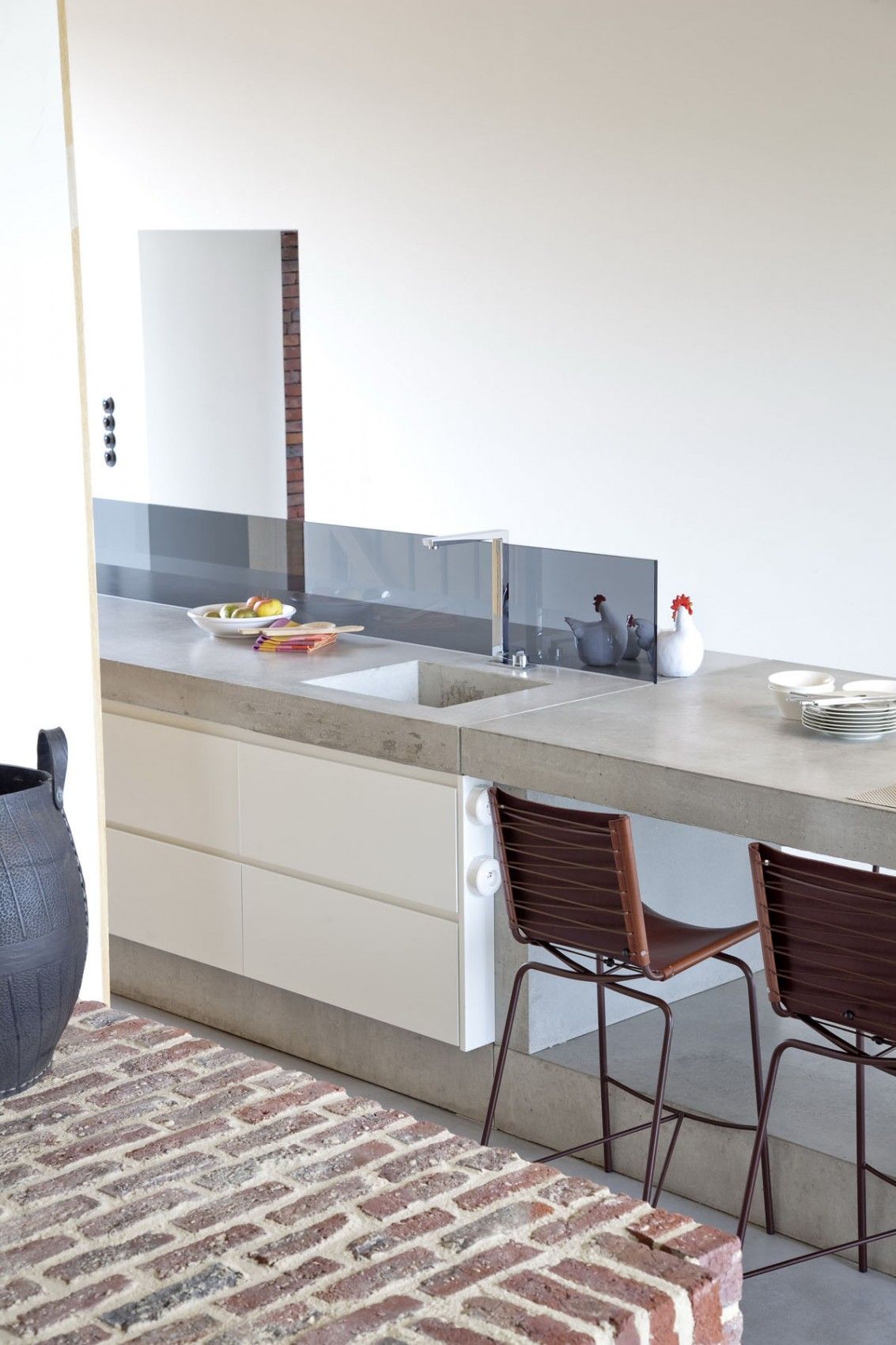 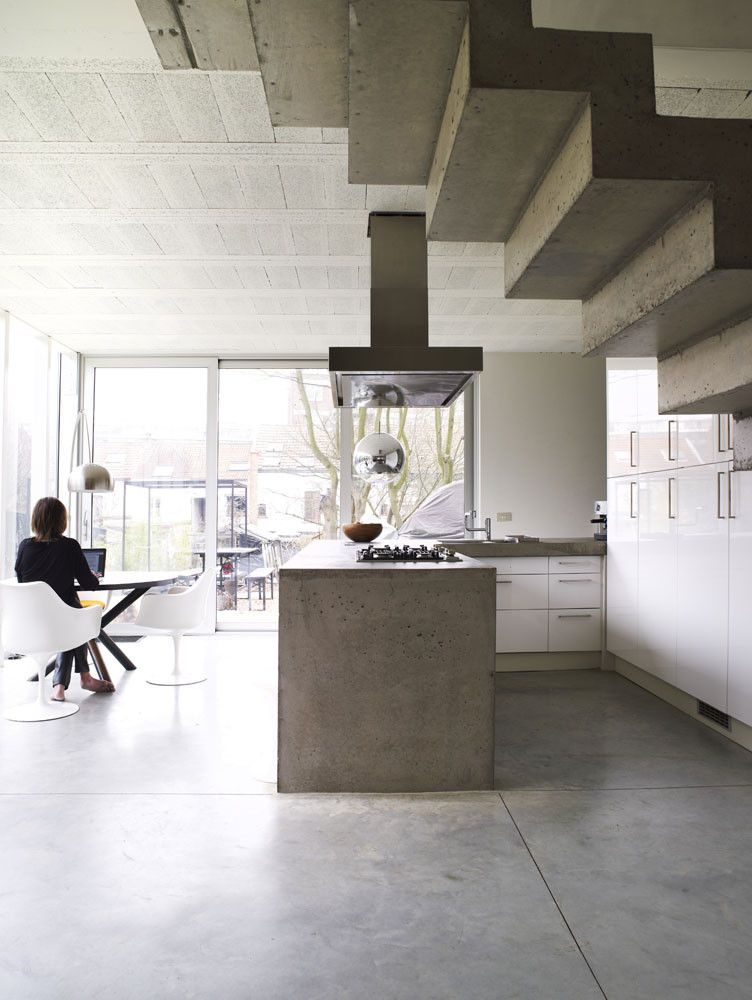 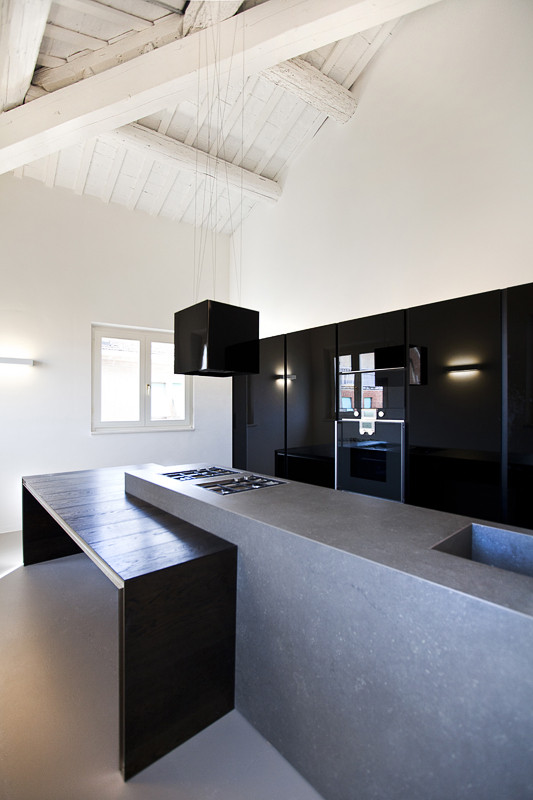 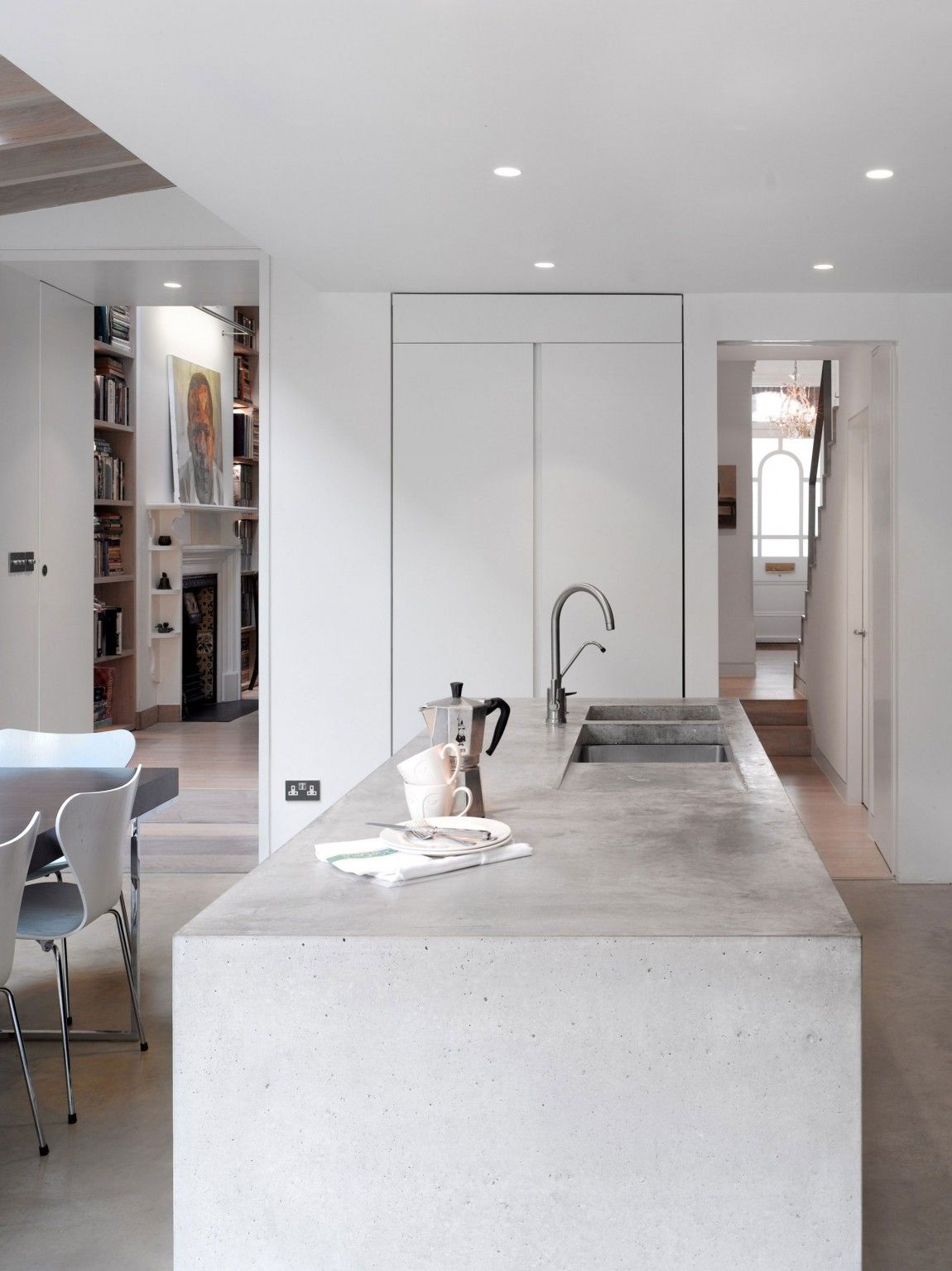 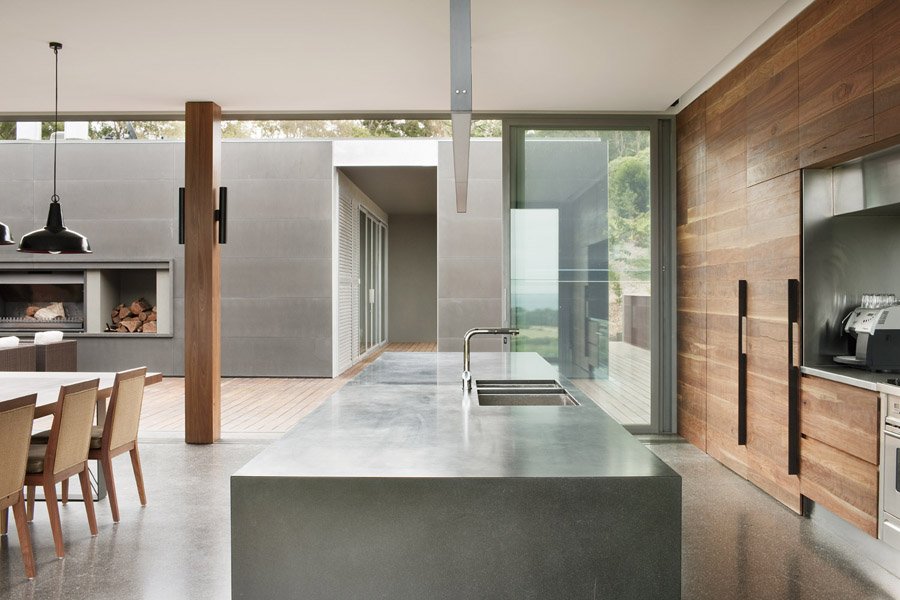 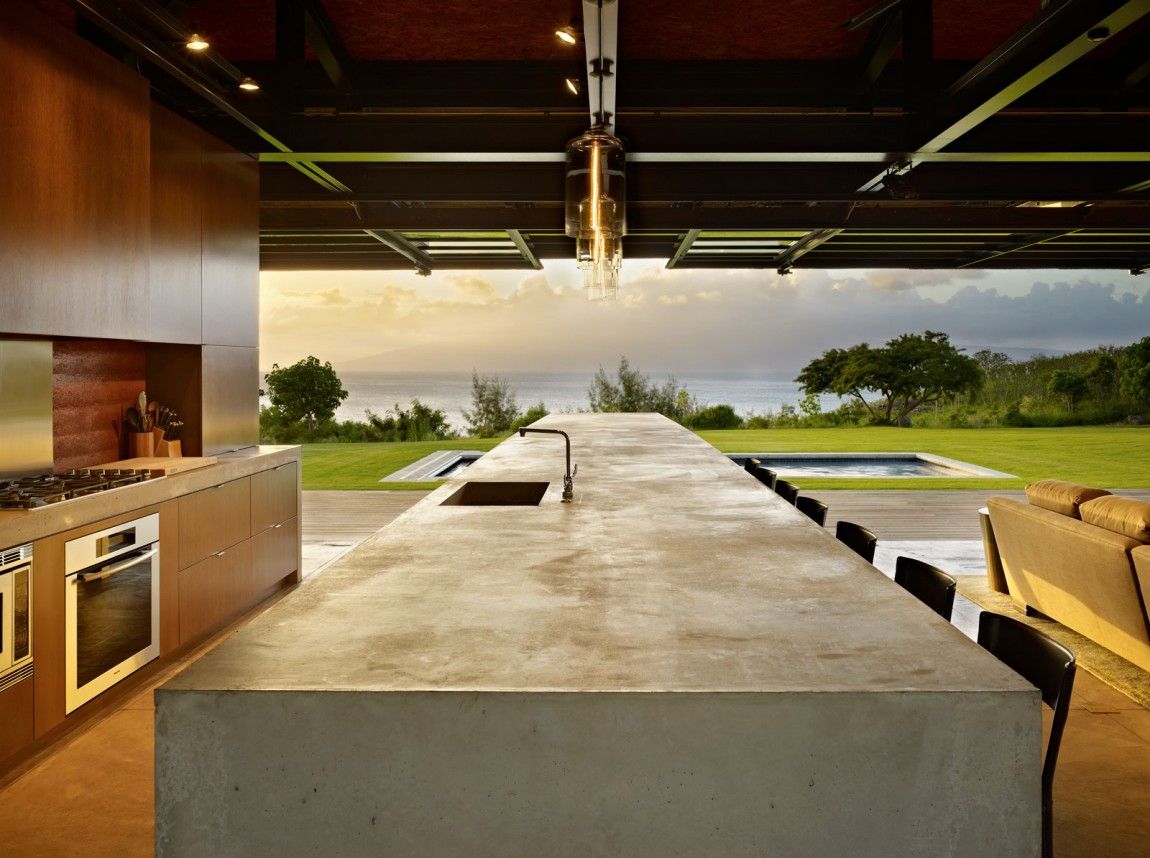 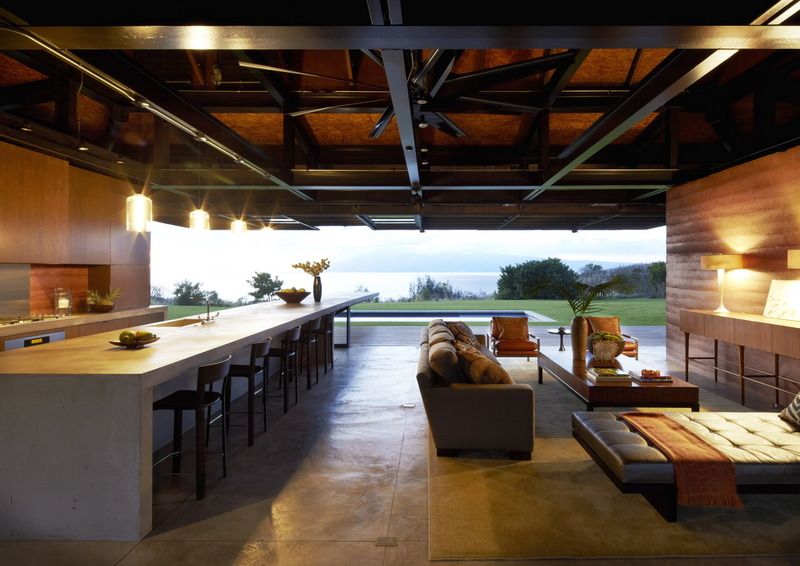 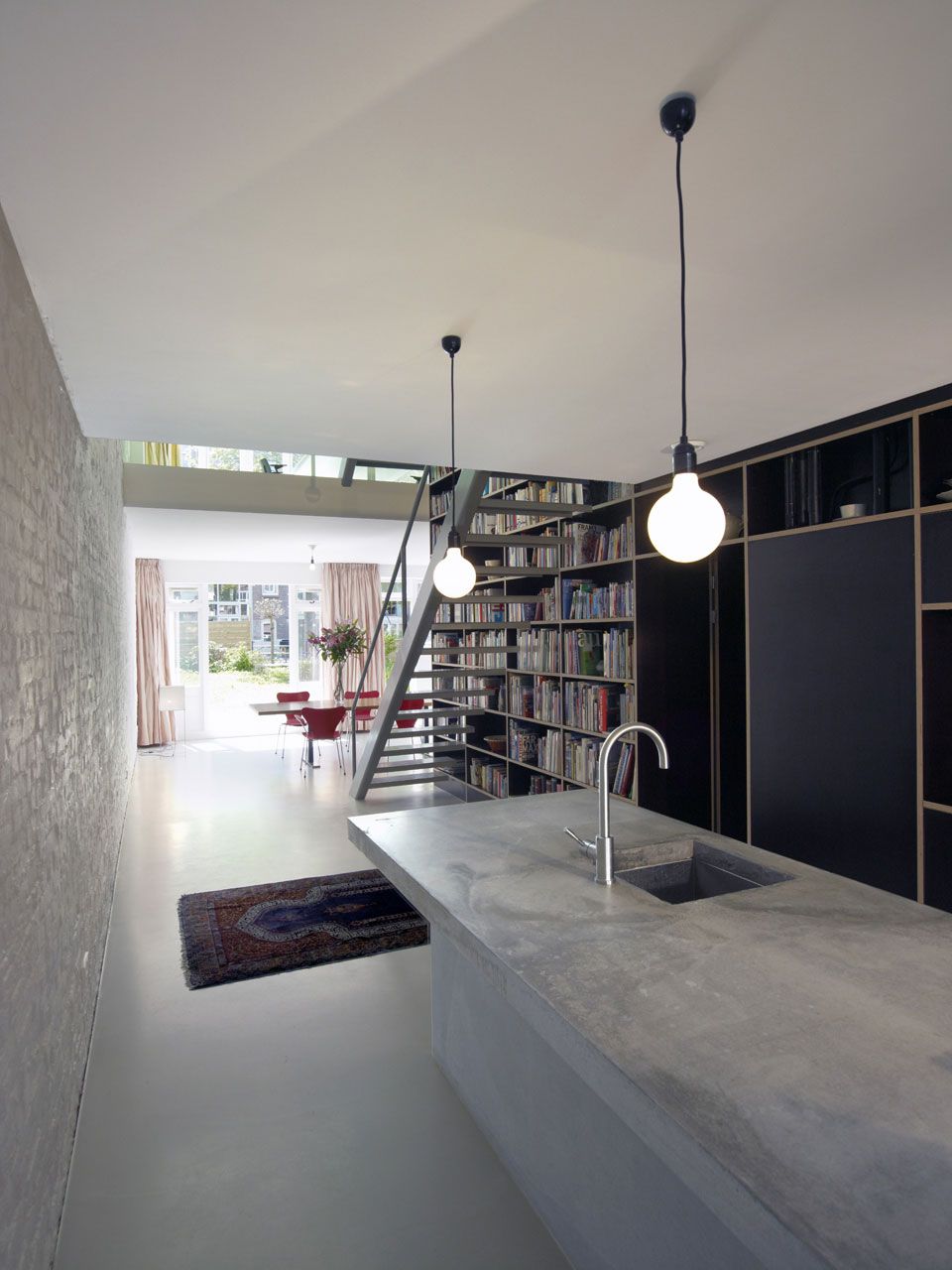 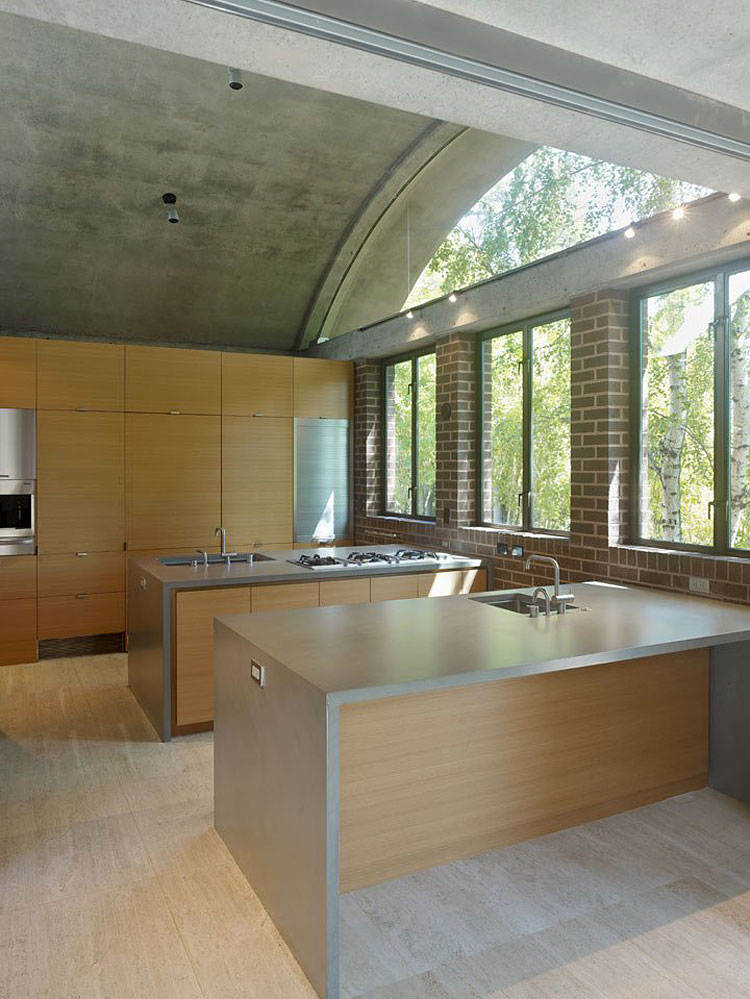 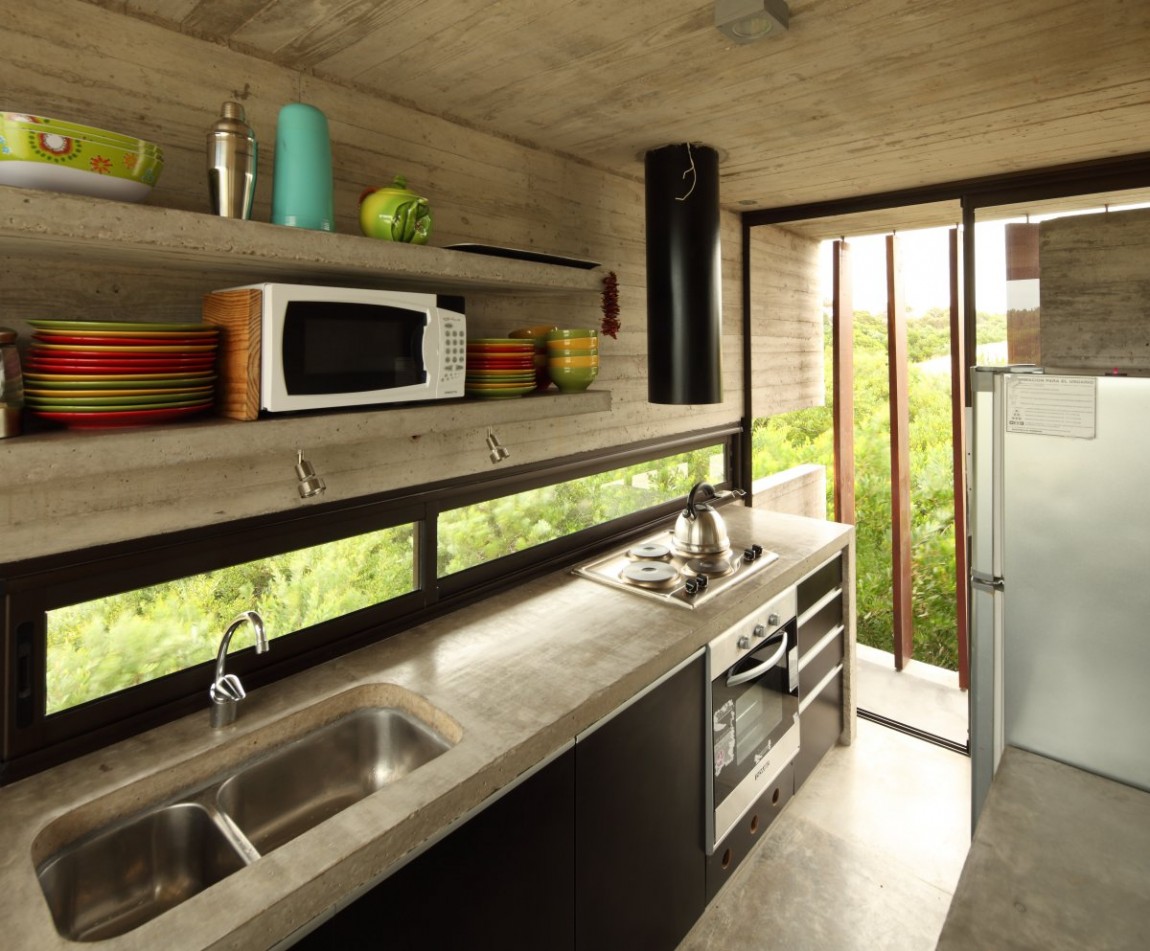 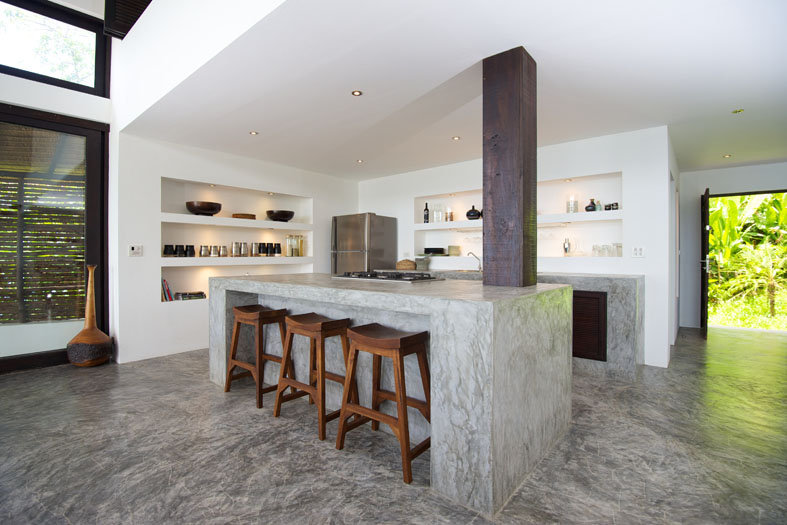 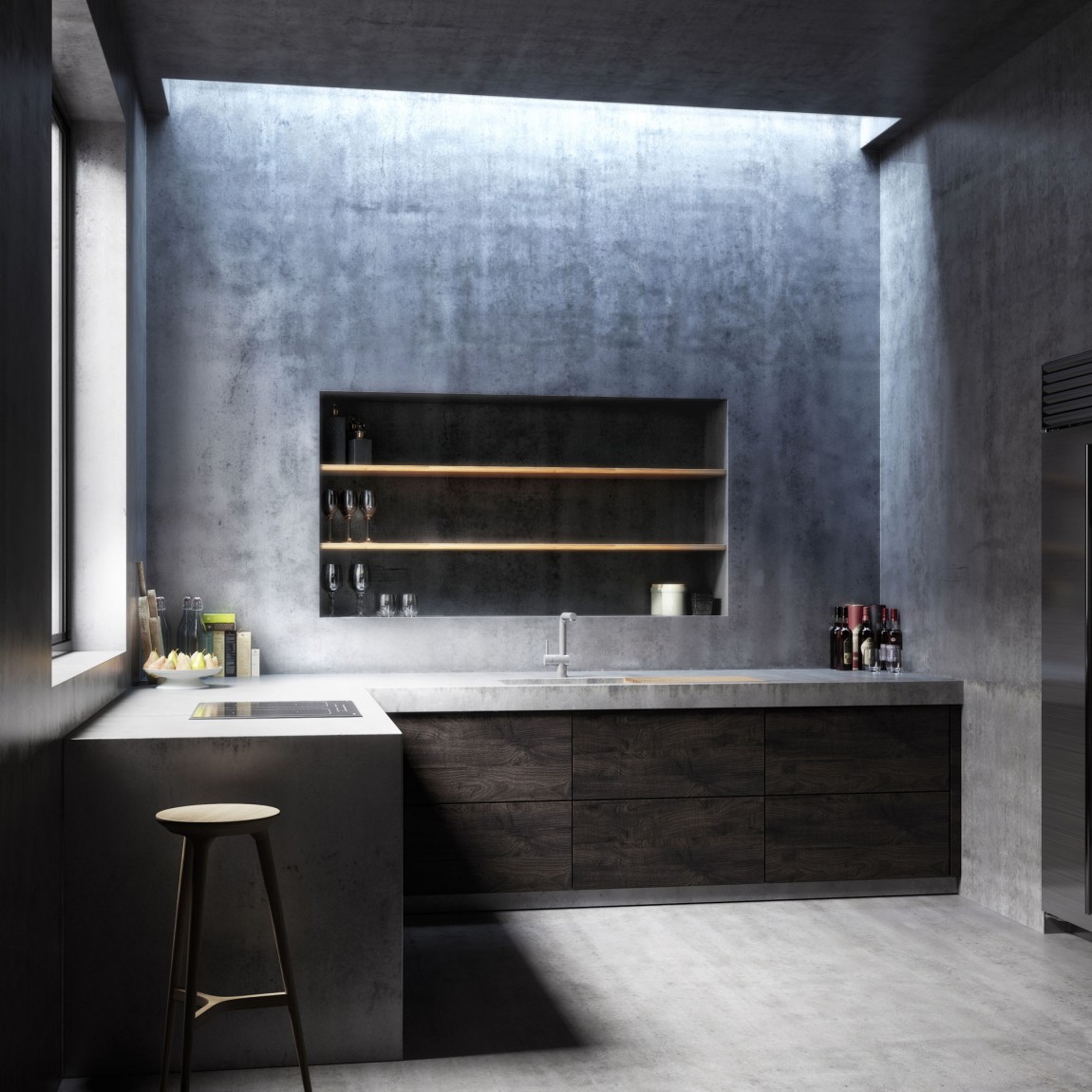 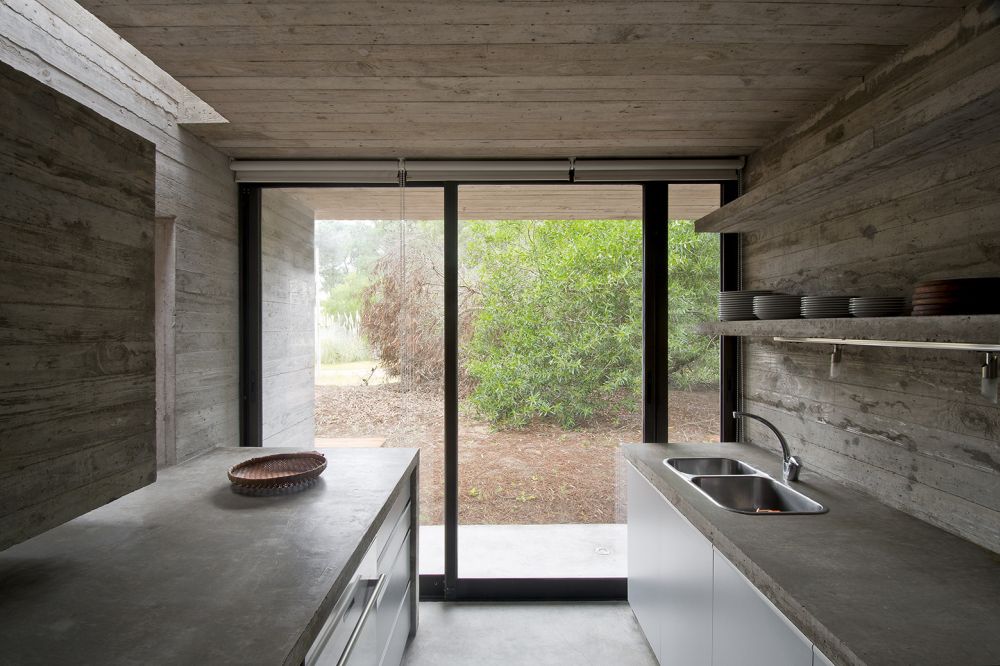 There’s a lot of to be inspired by when it comes to concrete countertops. The material has a bunch of great properties that make it a really good option for kitchens. But it’s not just that. A concrete counter also looks very beautiful. It has a solid and robust feel and it has that beautiful polished roughness that makes it irresistible. Concrete counters are popular in contemporary home but also in restaurants and other public spaces.

The Uzine restaurant has a concrete island and if you’re curious about the rest of the design you can visit it in Stockholm, Sweden. It was designed by architect Richard Lindvall in 2015. The space used to be a sausage factory and the transformation had to be major in order to turn it into a welcoming restaurant with a totally new concept.

Private residences designed in the recent few years often feature concrete counters in their open space kitchens. The Street House is located in Toronto, Canada and was recently renovated by gh3. The project was very challenging as the architects had to transform a historic landmark into a contemporary home without totally extinguishing its defining Edwardian features. The kitchen was opened up and a concrete island became its focal point.

The Rabbit Hole is a beautiful single family home in Gaasbeek, Belgium. It was designed by LENS°ASS architecten in 2010 and it has an interior defined by a combination of rustic, industrial and contemporary elements. The kitchen island has a concrete top and a matching bottom, standing out by contrast with the exposed bricks and the wood beams. The counter-height stools also highlight this elegant contrast.

The design concept proposed by the Flower House in Porto, Portugal is really interesting and also unusual. The social area is small and organized on different levels but not in the usual way. It’s unclear whether the lounge space in sunken or if the dining space is elevated. Either way, the platform on which the dining table and chairs stand continues behind the sofa and forms a U-shaped concrete counter for the kitchen. This original design is the work of EZZO.

A concrete counter is also the defining feature in the kitchen designed by L’Escaut Architectures for a house in Uccle, Brussels, in Belgium. The kitchen counter matches the staircase which doubles as an architectural and sculptural feature for the entire social area. Further more, the space has polished concrete floors and this allows the counter to fit in the décor quite naturally.

For Loft B, a private home in Ferrara, Italy, Tomas Ghisellini Architects designed a very interesting and elegant kitchen island which has a solid concrete body but also a wooden extension which can be used as a dining table or prep surface. The two contrast not just in terms of material but also color and texture. The design is simple as well as very functional.

This stylish concrete island separates the kitchen from the dining area inside the Book Tower House. The residence is located in London, England and was designed by Platform 5 Architects. With light-colored walls, large windows and high ceilings, the house is bright and open and the concrete island matches the polished floor, being complemented by the warm touch of the wood and the exposed bricks on the wall.

A similarly harmonious balance of cool and warm tones and textures is also featured by the Shoreham House which was designed by Australian studio SJB Architects in Victoria, south-east of Melbourne. In this case, however, wood was used in abundance throughout the house. It balances out the cool concrete island and the polished concrete flooring.

In 2009 Olson Kundig Architects completed the Slaughterhouse Beach House, a private home that, despite its name, is very cozy and welcoming. It’s situated on the island of Maui in Hawaii and it’s made of three connected volumes. One houses the living areas, another the guest bedrooms and the third one contains the main sleeping area. In the common volume, an open kitchen is separated from the lounge space by a long concrete island which can also double as a bar and even as a dining table.

When adding a concrete counter or island to a kitchen, architects and designers sometimes try to make up for its cool and neutral look with accent features such as a textures or colored area rug, wooden cabinetry or stylish lighting fixtures. Some of these strategies were employed by the team at Shift Architecture Urbanism when they designed the Vertical Loft, a private residence in Rotterdam, The Netherlands.

The Concrete House designed by Ogrydziak and Prillinger Architects has not one but two kitchen islands. The house is located in Piedmont, California. Both islands feature a combination of concrete and wood. They coordinate with the wall unit and the arched ceiling and their simplicity allows the exposed brick accent wall to stand out by contrast. Similar combinations were also used in other spaces, a good example being the bathroom.

Concrete and wood are the two main materials used by BAK Arquitectos when designing this contemporary residence in Costa Esmeralda, Argentina. It’s a summer house completed in 2011 that makes the most of both these materials. Concrete was used on the floors, staircases and in the kitchen where the counter and the shelves are also made of concrete. These elements are complemented by wooden ceilings, walls and furniture.

Choosing to match the furniture or other elements to the floor, ceiling or walls is an interesting and inspiring idea. For example, a concrete kitchen island could match the polished concrete floor and this would establish a continuous and cohesive décor. This also offers a lot of possibilities in terms of accent colors and materials. For instance, Casas del Sol which is a resort in Thailand designed combines its concrete counters, platforms and floors with warm touches of wood, live-edge tables and patterned area rugs.

Another beautiful example that showcases the beauty of concrete counters and matching walls or surfaces is the Writer’s Home, a minimalist house designed by Angelo Fernandes. In the kitchen, light subtly enters through a slit in the ceiling, touching the concrete walls and counters and highlighting their rough and unique texture.

When designing the SV House, Luciano Kruk Arquitectos designed the kitchen using a beautiful combination of wood and concrete. Together, these two materials complement each other and each highlights its own unique particularities such as texture or color which are really similar. The concrete countertops are complemented by wooden backsplashes and shelves and in fact a nice visual distinction can be made between the lower portion of the room which is defined by concrete and the upper section dominated by wood.