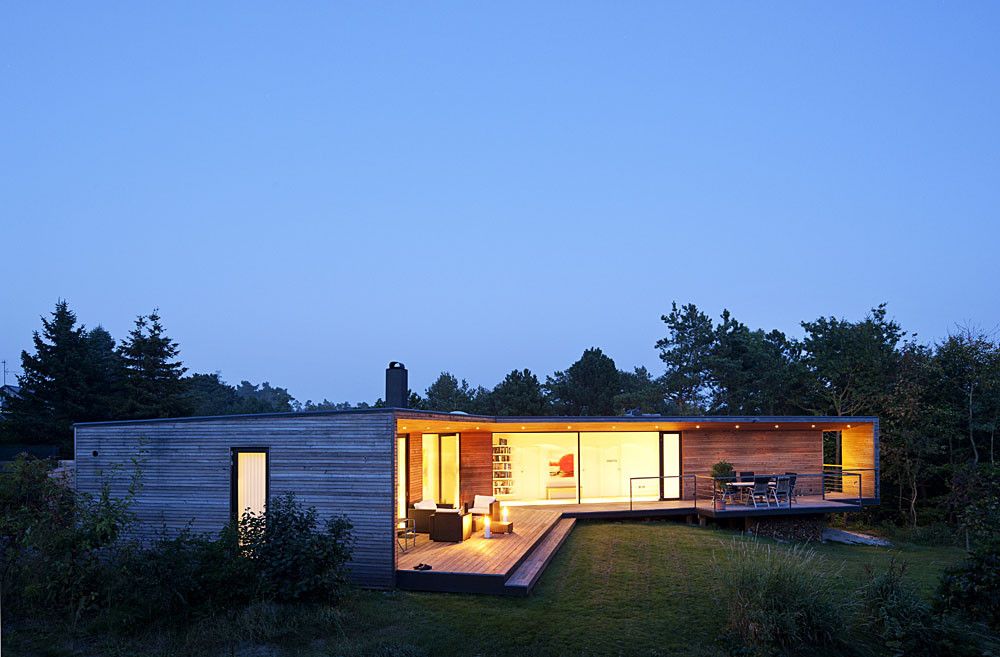 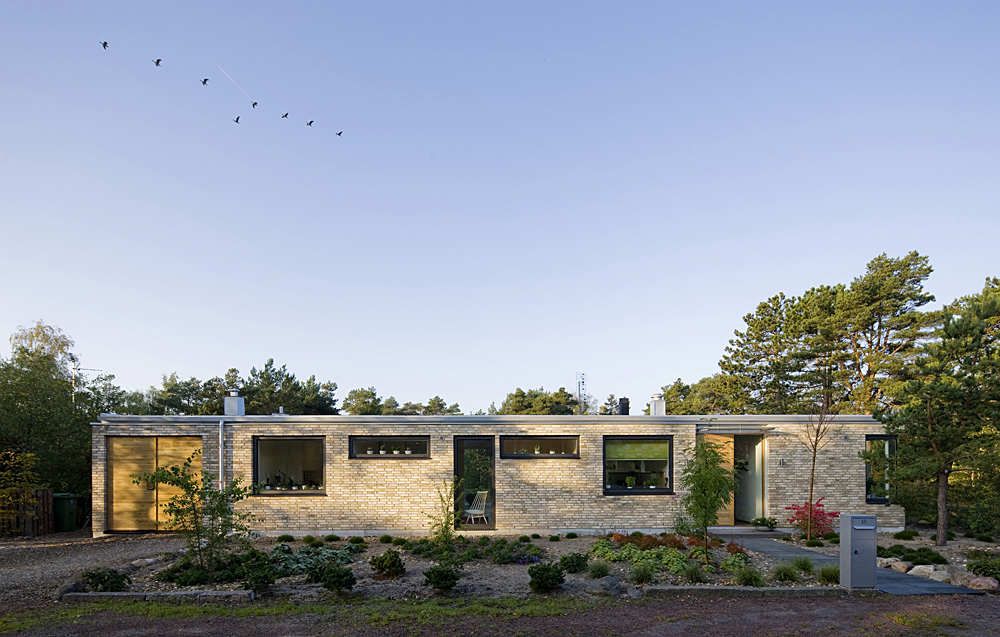 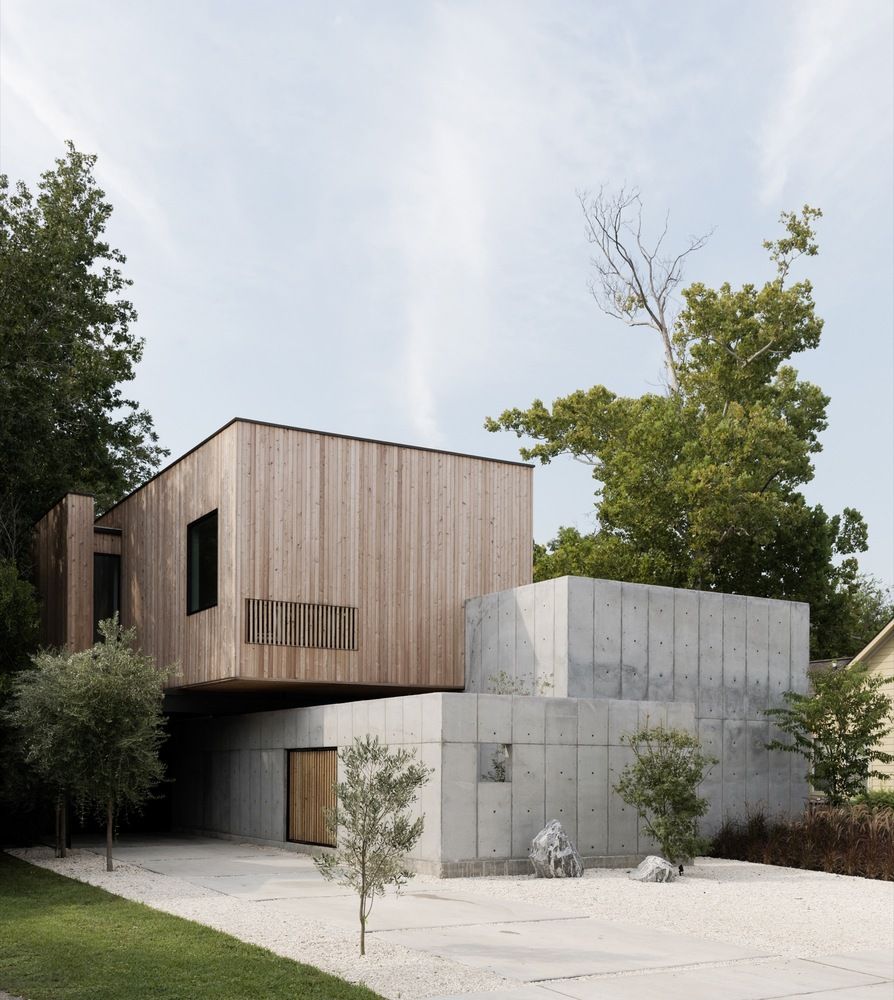 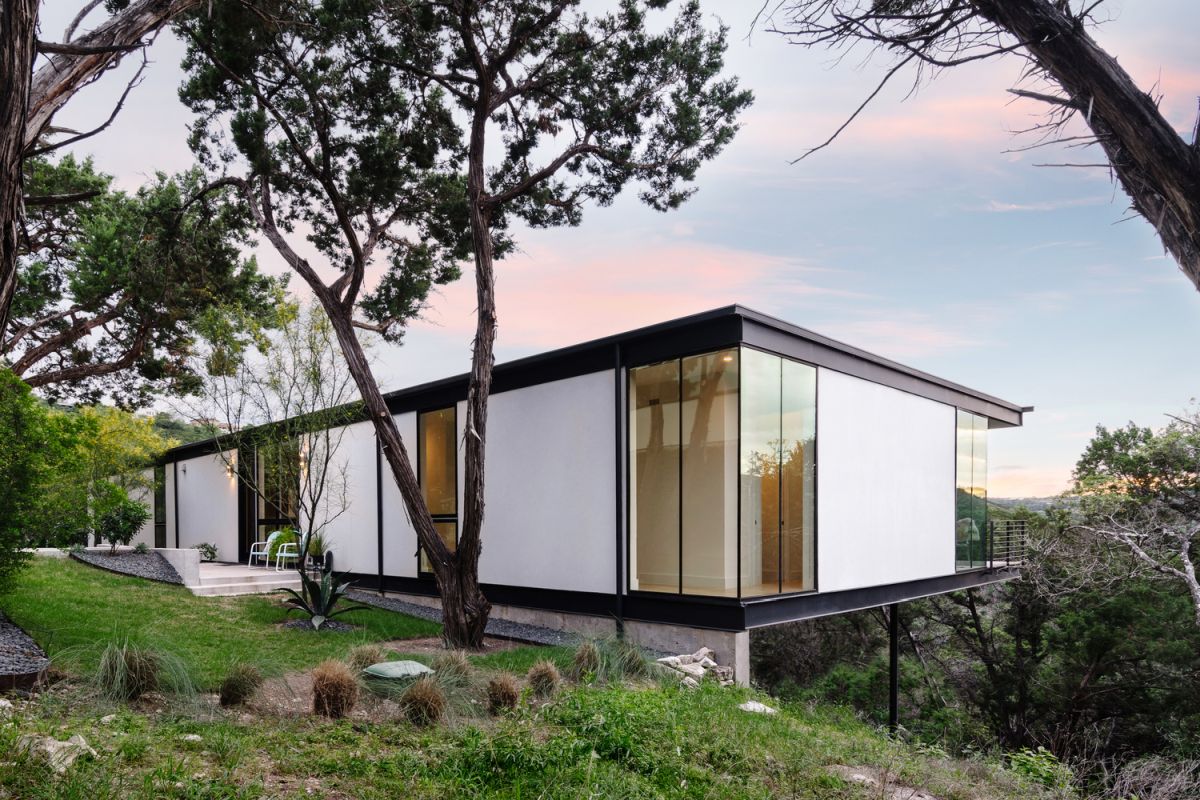 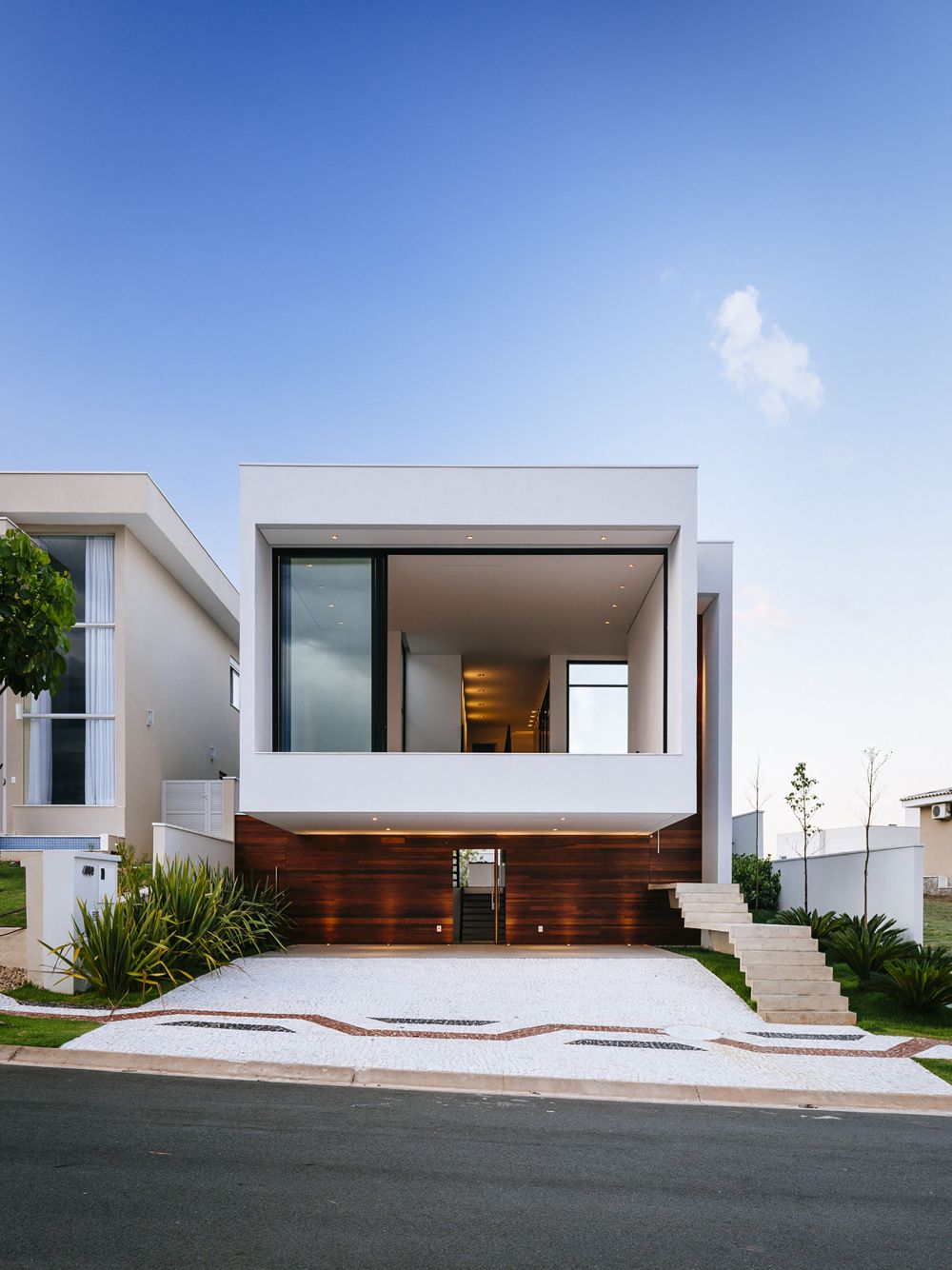 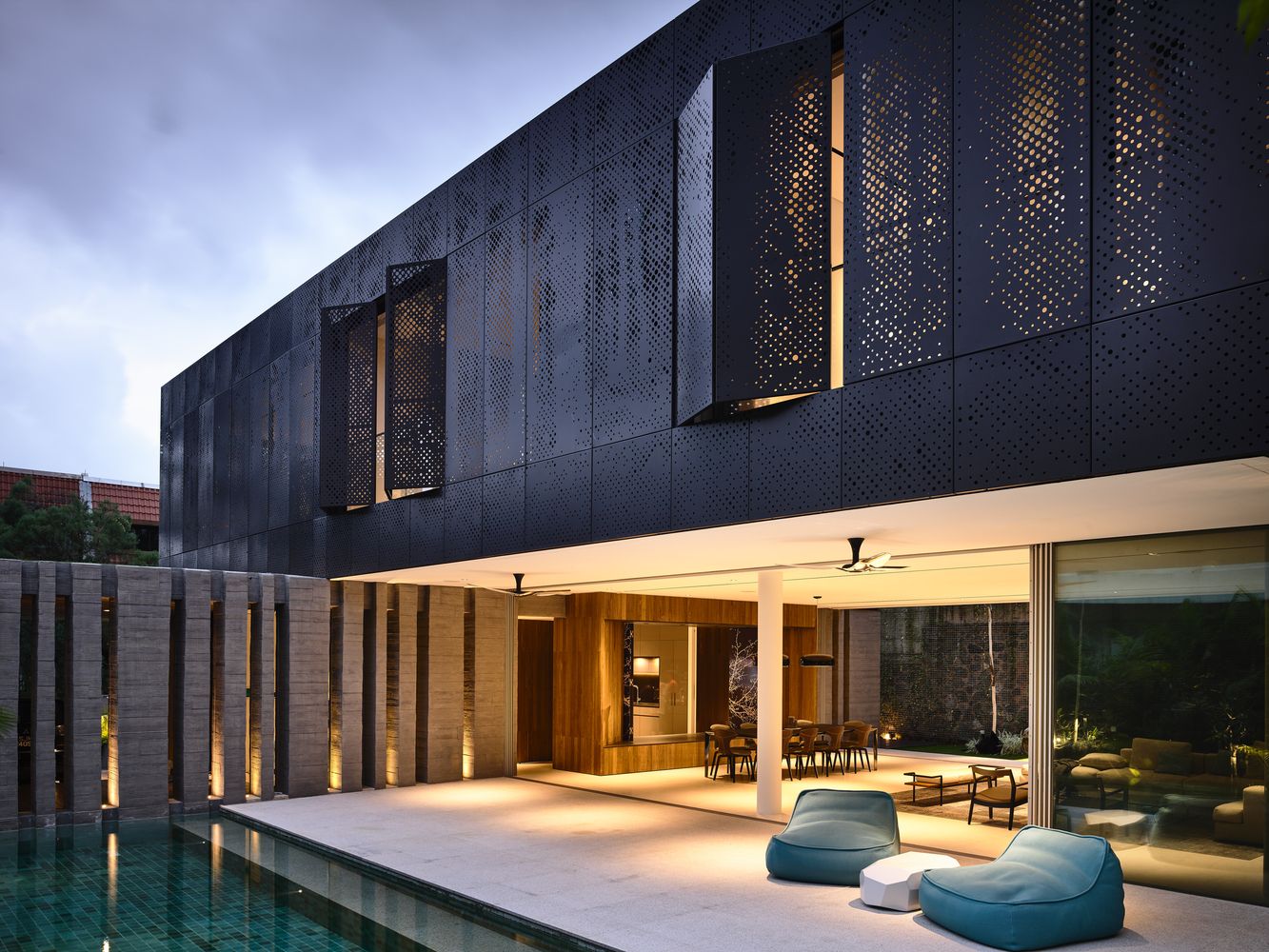 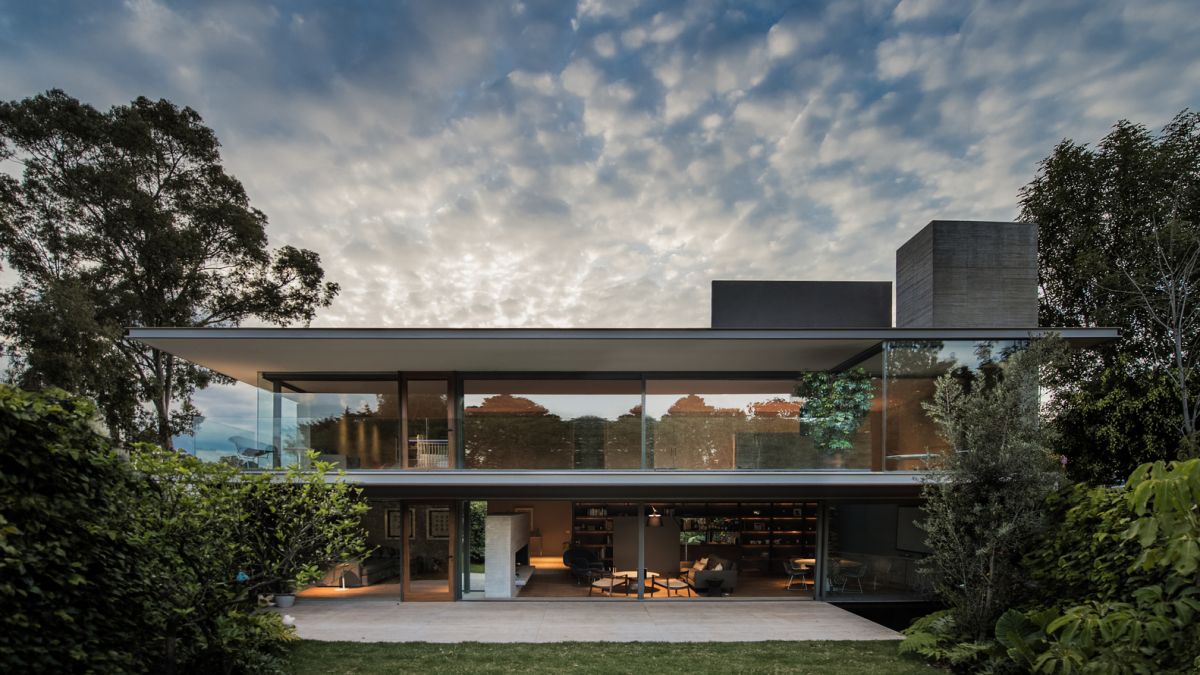 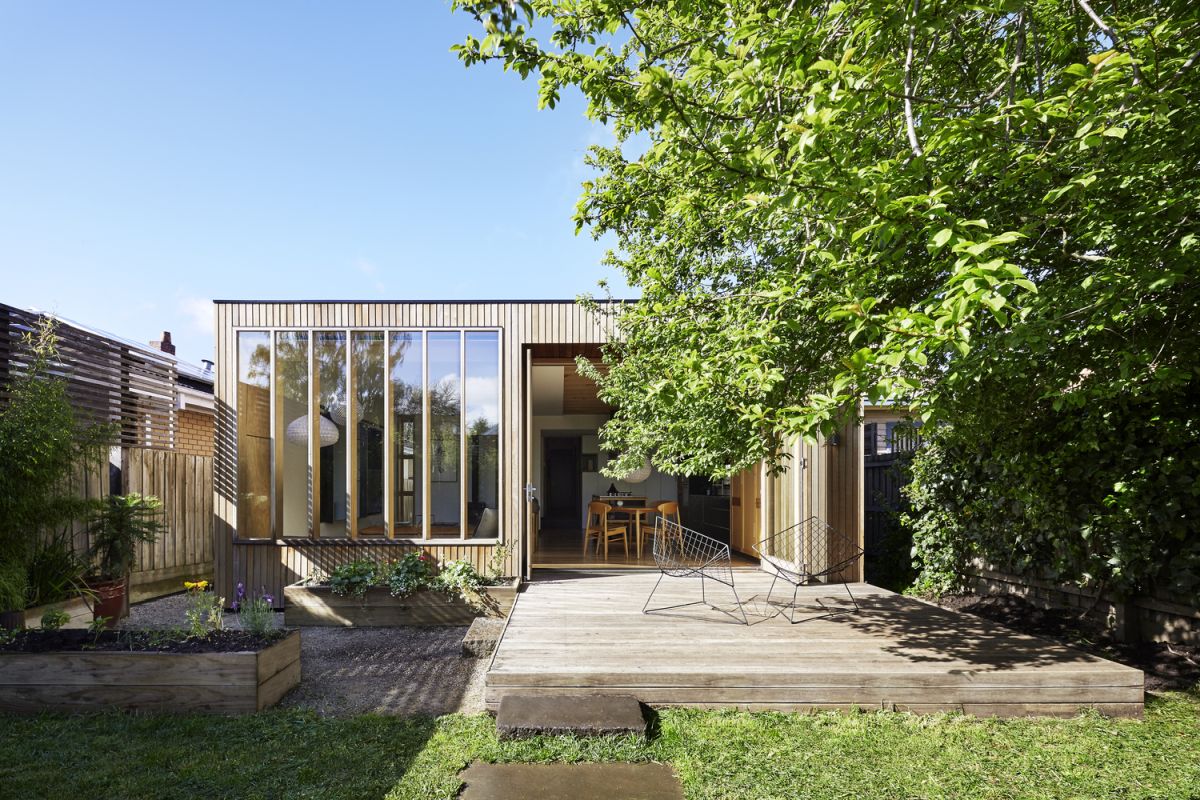 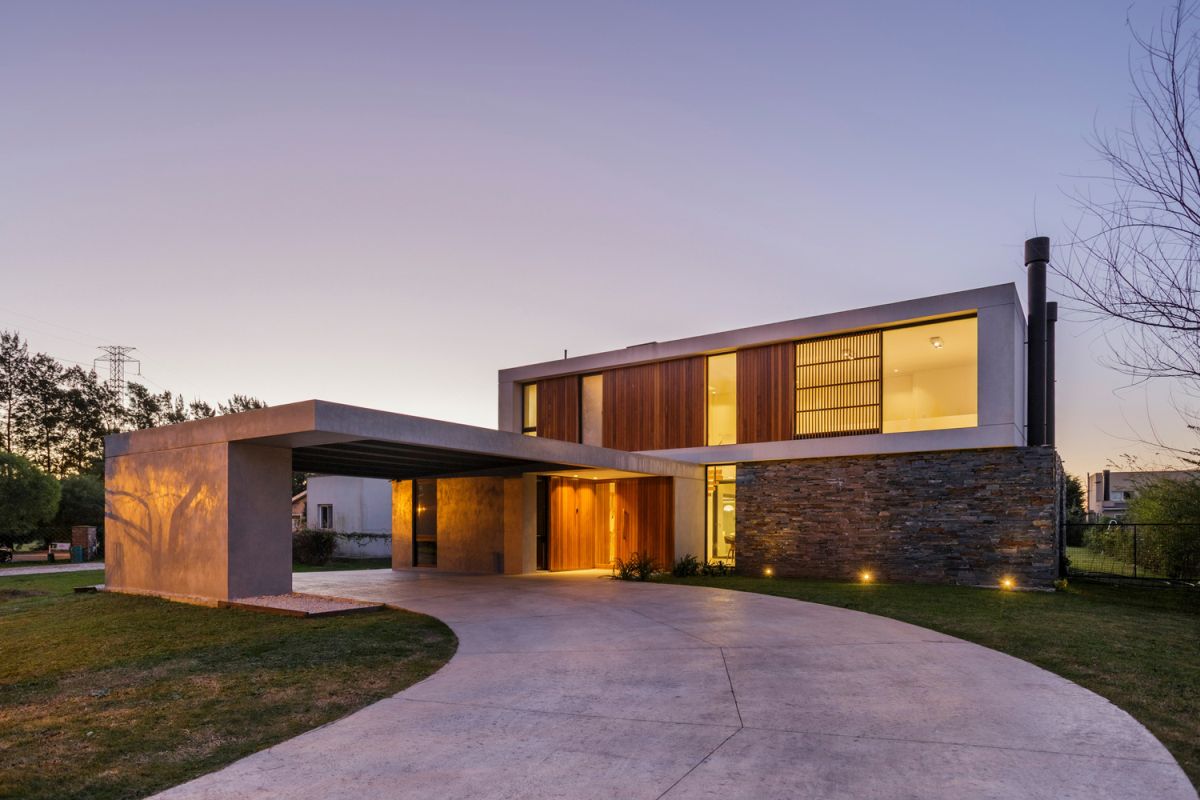 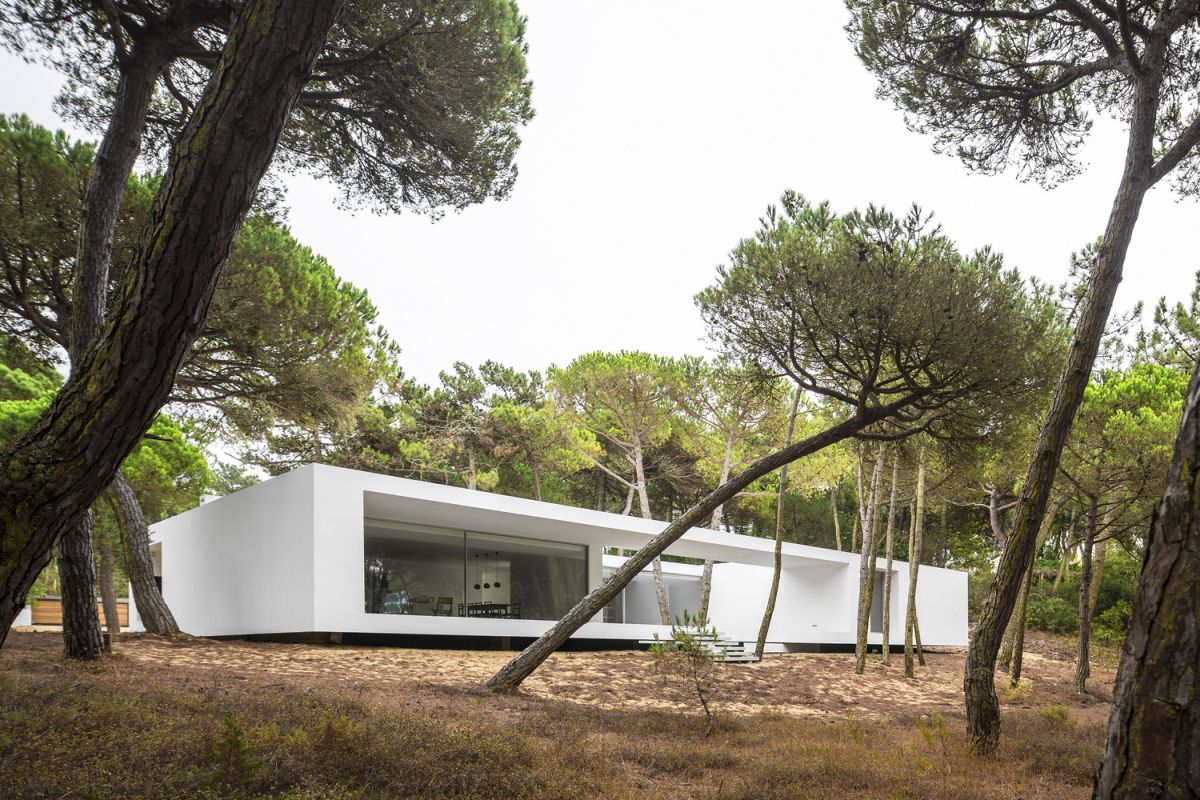 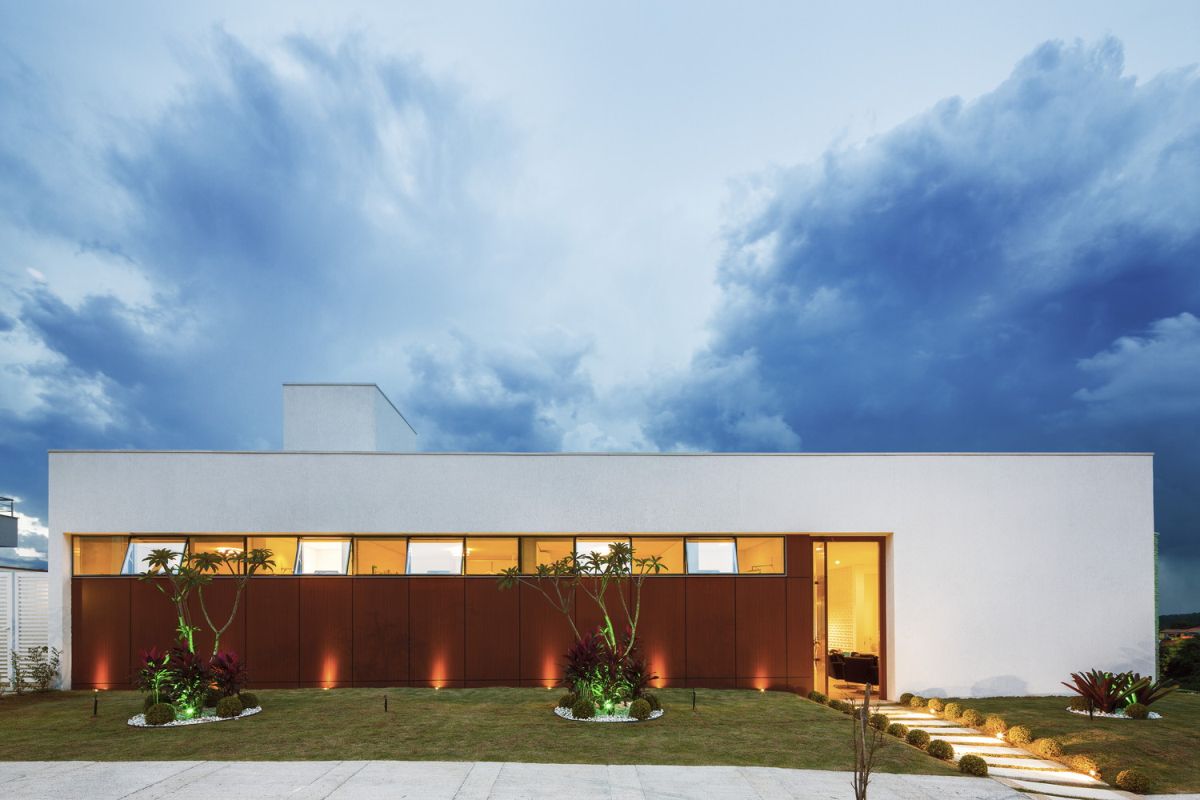 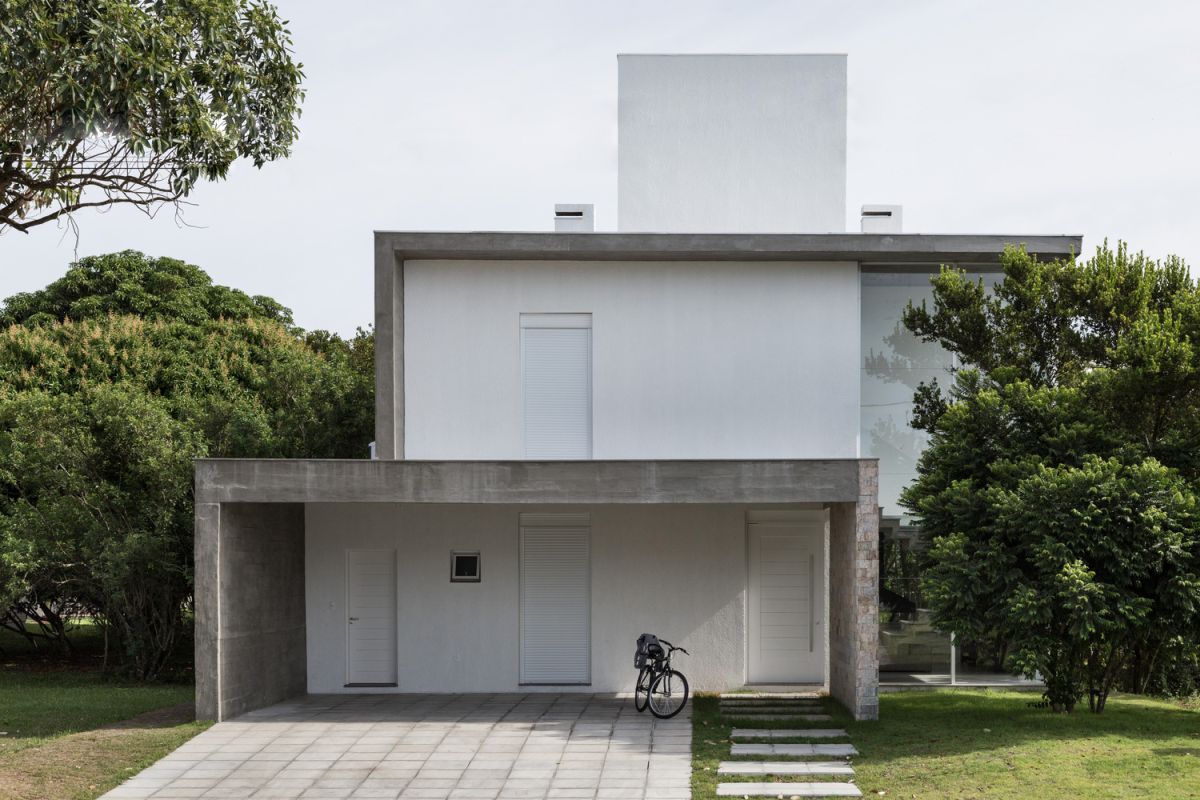 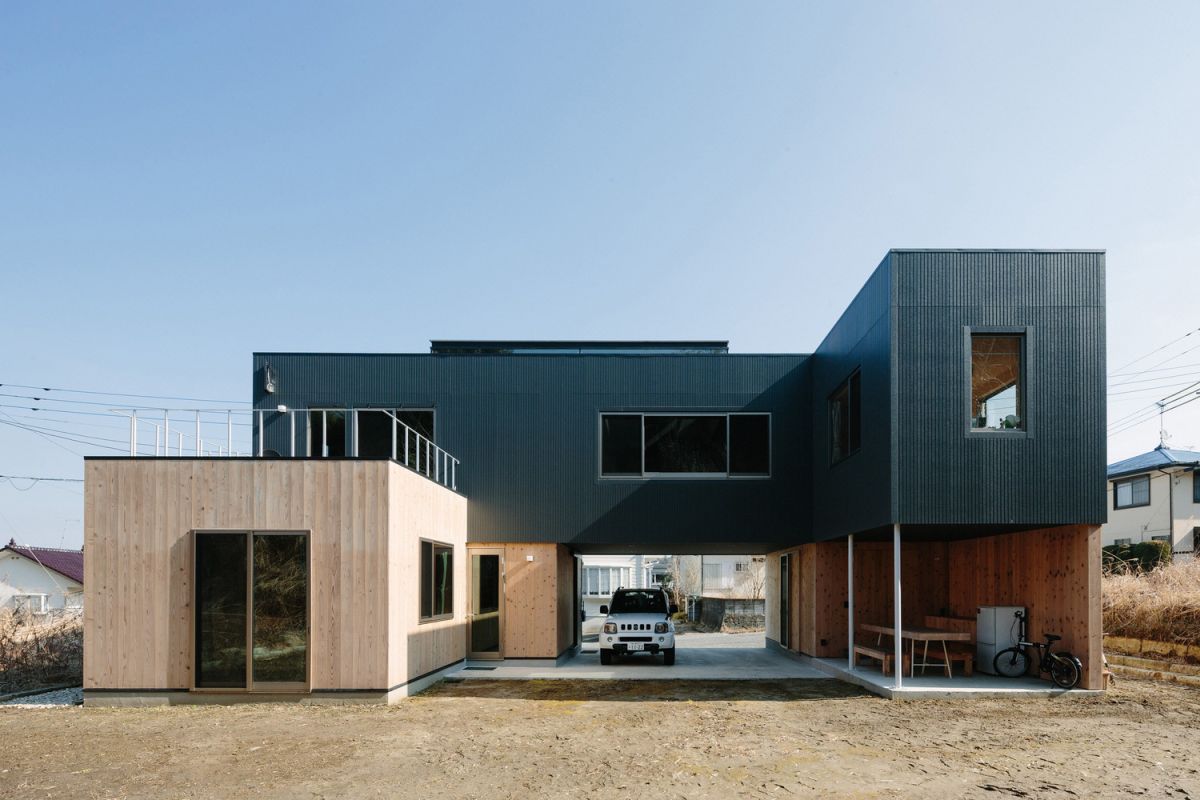 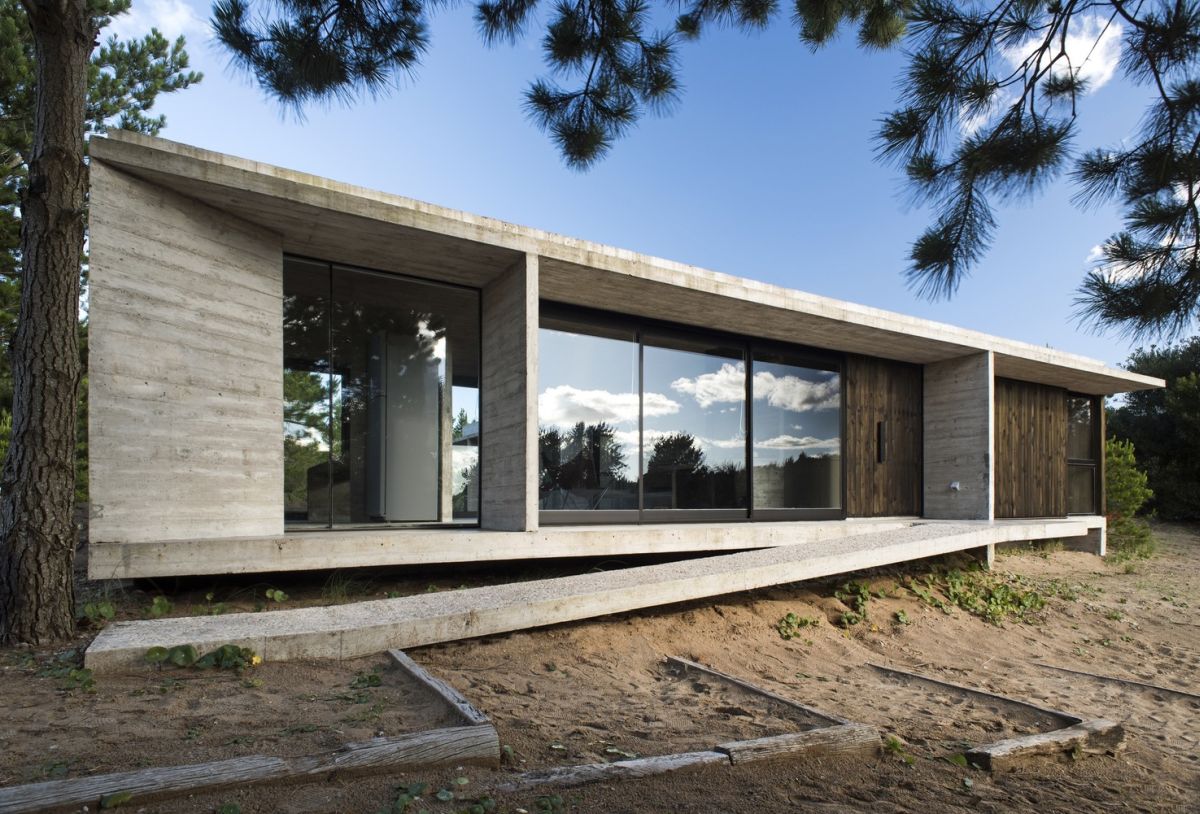 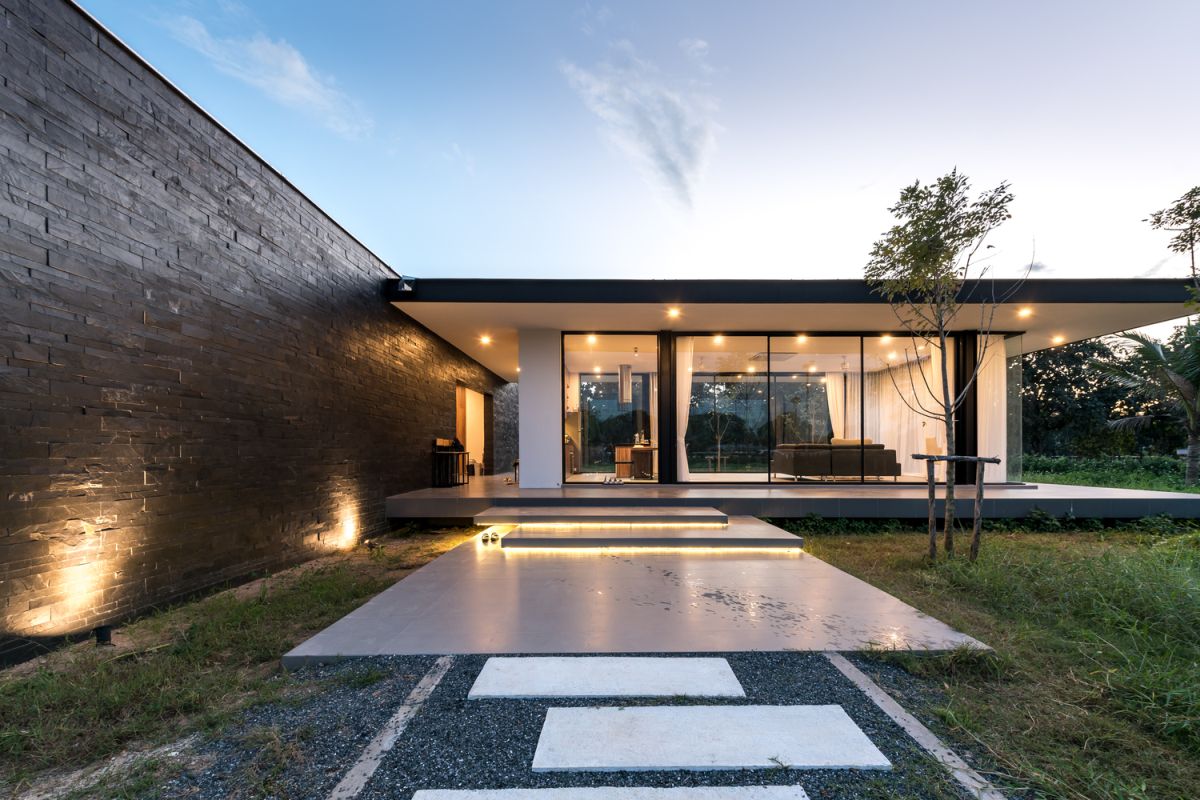 The flat roof trend is very popular with modern and contemporary buildings but is actually ancient, being characteristic to the Egyptian, Persian and Arabian architecture styles. A flat roof is almost level, in contrast with the many types of sloped roofs. The slope or pitch of a flat roof goes up to 10 degrees which allows the surface to be used as a terrace, a roof living space or as a garden. Living roofs are almost always flat and there are a lot of advantages that come with this style. However, a flat roof house is not a great idea in areas where it rains a lot as the roof can become saturated with water and leak or where the water can freeze and expand, causing the structure of the roof to become damaged. Today we’re going to have a look at 15 beautiful houses with flat roofs and cool designs.

The first flat roof house on our list was designed by Johan Sundberg and is located in Trelleborg, Sweden. It’s a lovely summer retreat with potential to one day become a permanent residence. One side of the building is slightly cantilevering over a gentle slope and the simple and uniform design, inside and out, give the structure a level and well-grounded look. The flat roof puts an emphasis on the linearity and simplicity of the design.

Located in Höllviken, Sweden, this flat roof house is another great project completed by architect Johan Sundberg. As per client’s request, the house has a modern and nature-oriented structure and its spaces are organized on a single level. The exterior walls are clad with clay bricks and this allows the house to better connect to the garden and to its surroundings in general.

Not all flat roof houses are single-level structures. In fact, a lot of them aren’t. This is The Concrete Box house, a residence located in Houston, Texas and designed and built by Robertson Design. Three main goals prevailed over everything else: a well-defined and planned entryway, the use of simple and pure materials and a sculptural design and structure. The architects organized the building into three box-like volumes, each with its own function and all three with flat roofs that emphasize their clean geometry.

When they designed the RoadRunner Residence in Austin, Texas, North Arrow Studio wanted to make this flat roof house look like it’s floating so they built a significant section of the house on stilts which blend in with the landscape. The side of the house facing the beautiful preserve is mostly made of glass and offers some truly amazing views. This is a house that tames the wilderness in a very stylish way.

The Guaiume House is another beautiful flat-roofed structure that seems to make the most of this ancient architectural style. The house is located in Campinas, in Brazil and was planned and built by 24.7 Arquitetura Design. Two of the main goals of the project were to connect the house to nature and to the terrain on which it stands and to optimize the ventilation throughout the spaces. In order to do both these things, the architects organized the spaces vertically, giving the house four levels and a flat, clean roof.

When ONG&ONG Pte Ltd was charged with designing this bespoke residence in Singapore, they decided to align the structure to one side of the site and to optimize space usage by creating a layout which includes the garden and the lap pool. They also gave the house a flat roof which puts en emphasis on its clean and modern geometry and at the same time contrasts with some of the interior design features.

This is the Ramos House, a residence located in Ciudad de Mexico and designed by JJRR/Arquitectura. The site on which it was built has a triangular shape is also a bit uneven. That meant a custom design had to be created, one which was able to deal with these challenges and to make the most of what the site had to offer. A decision was made to build a flat roof house with three levels, including a basement floor which takes advantage of the unevenness of the site in a creative way.

Flat roofs are pretty versatile and they look great on all sorts of structures. An interesting example is the Wooden Box House which was designed by Moloney Architects in Ballarat, Australia. The house has an eclectic style which blends contemporary architecture with Victorian design influences. Old and new features and details come together in a structure that’s as beautiful as it is welcoming and family-friendly.

Speaking of welcoming spaces, ZIM arquitextura designed a really cool flat roof house in Tigre, Argentina and the focus on the project was to create a space that welcomes and hugs the guests in a cozy and friendly manner. The final design features two types of spaces. The public, social areas form a volume clad in concrete while the private areas are housed inside a wood volume. They’re stacked on two floors toped with a flat roof.

A single level and a single volume but with two distinct faces, this is how we’d describe this minimalist flat roof house that Frederico Valsassina Arquitectos built in Colares, Portugal. This is a house that communicates with nature and with its surroundings in a very special way. The idea of the design is that it gives the impression of being indoor and outdoor at the same time. All the interior spaces have individual access to the outdoors and the patio serves as a connector between these two environments.

Depending on where you’re standing when you’re looking a it, this house from Jundiaí Mirim, Brazil has either one or two floors. It was designed by Aresto Arquitetura and it takes full advantage of the steep slope on which it stands. The flat roof is an element that contrasts with the topography, offering the house stability and allowing it to stand out.

Technically, this is a flat roof house but not in the most common sense since there are those unusual protrusions which give it a pretty imposing and quirky look. The house was designed by Live Incorporadora and is located in Vila da Serra, Brazil. The owner has a passion for beer production and this was reflected into the design of the house which includes a brewery on the first floor.

Located in Ichihara, Japan, this modern house was a project done by the architects at kurosawa kawara-ten who faces a pretty big challenge when they realized they couldn’t really build on one side of the lot so instead of an L-shaped structure they decided to create a two-storey home that splits at the center of the ground floor and allows the top level to cantilever.

Architect Luciano Kruk was also faced with a challenge when designing the Ecuestre House in Buenos Aires. The challenge was dealing with the unusual trapezoid-shaped of the lot and the fact that it slopes a bit towards its center. The solution was to put the house on a platform. A flat roof was chosen as a way to level the structure. The rugged and simplistic nature of the exterior is also a characteristic of the interior design of the spaces.

The last flat roof house that we want to show you today was designed by b l a n k s t u d i o and is located in Chiang Mai, Thailand. It’s surrounded by a beautiful flower yard and has this open, multidirectional structure which allows it to connect well with nature and its immediate surroundings. The flat roof allows it to keep a low profile and to blend in quite nicely. Also, this longe terrace and the stone wall give the house a strong architectural vibe which in a way contrasts with everything we’ve described so far.