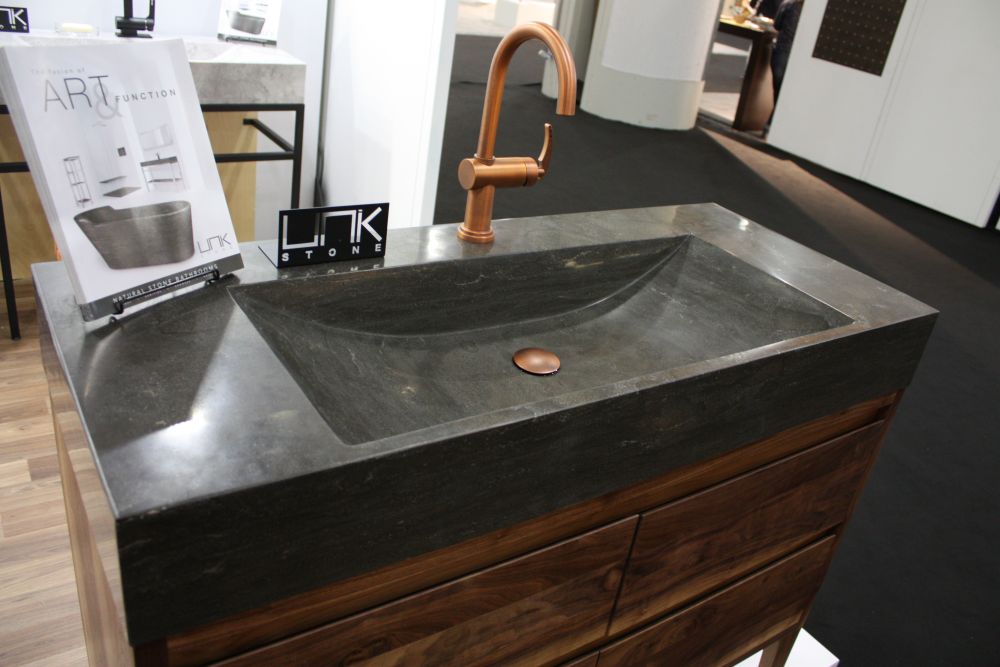 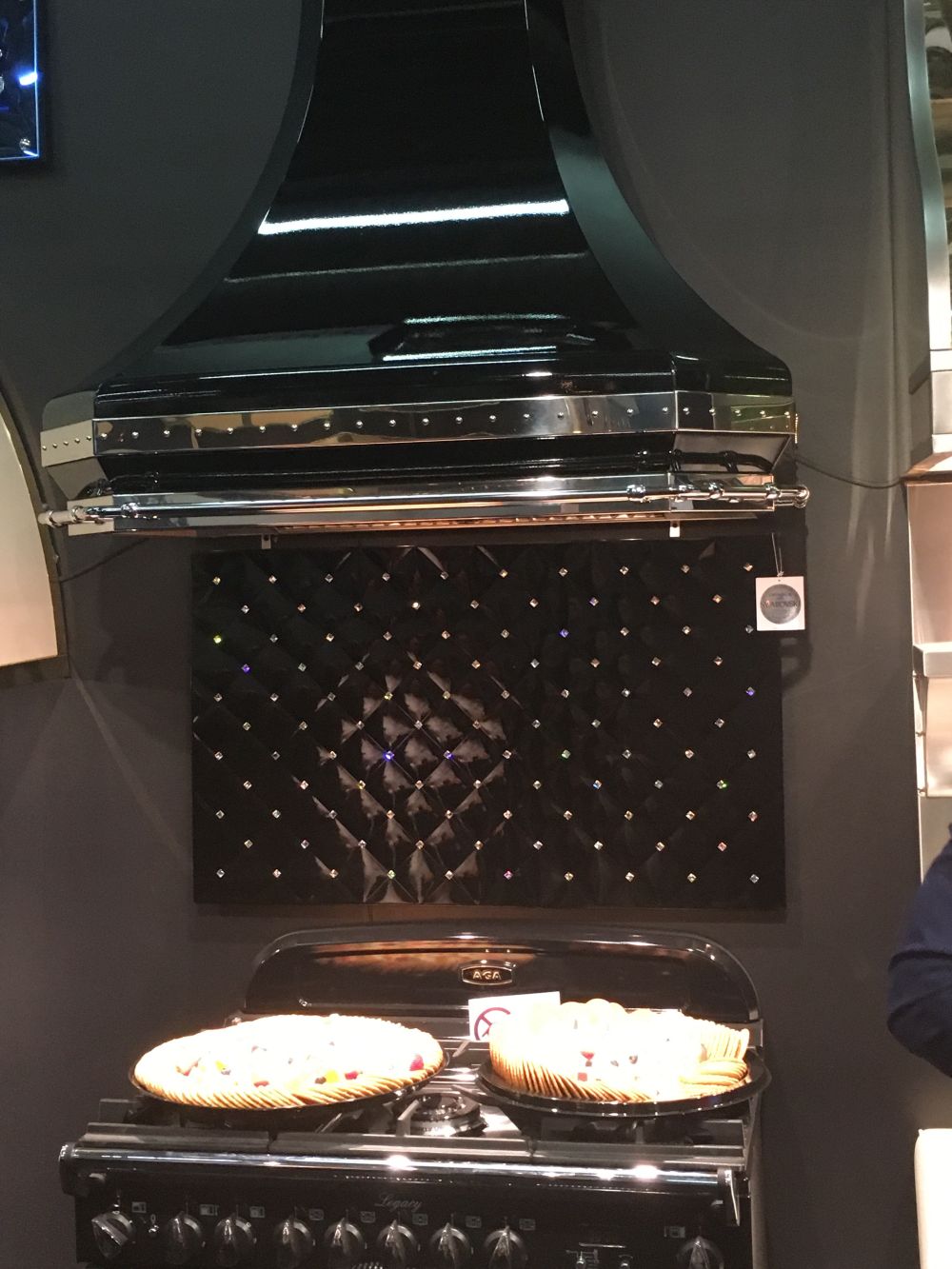 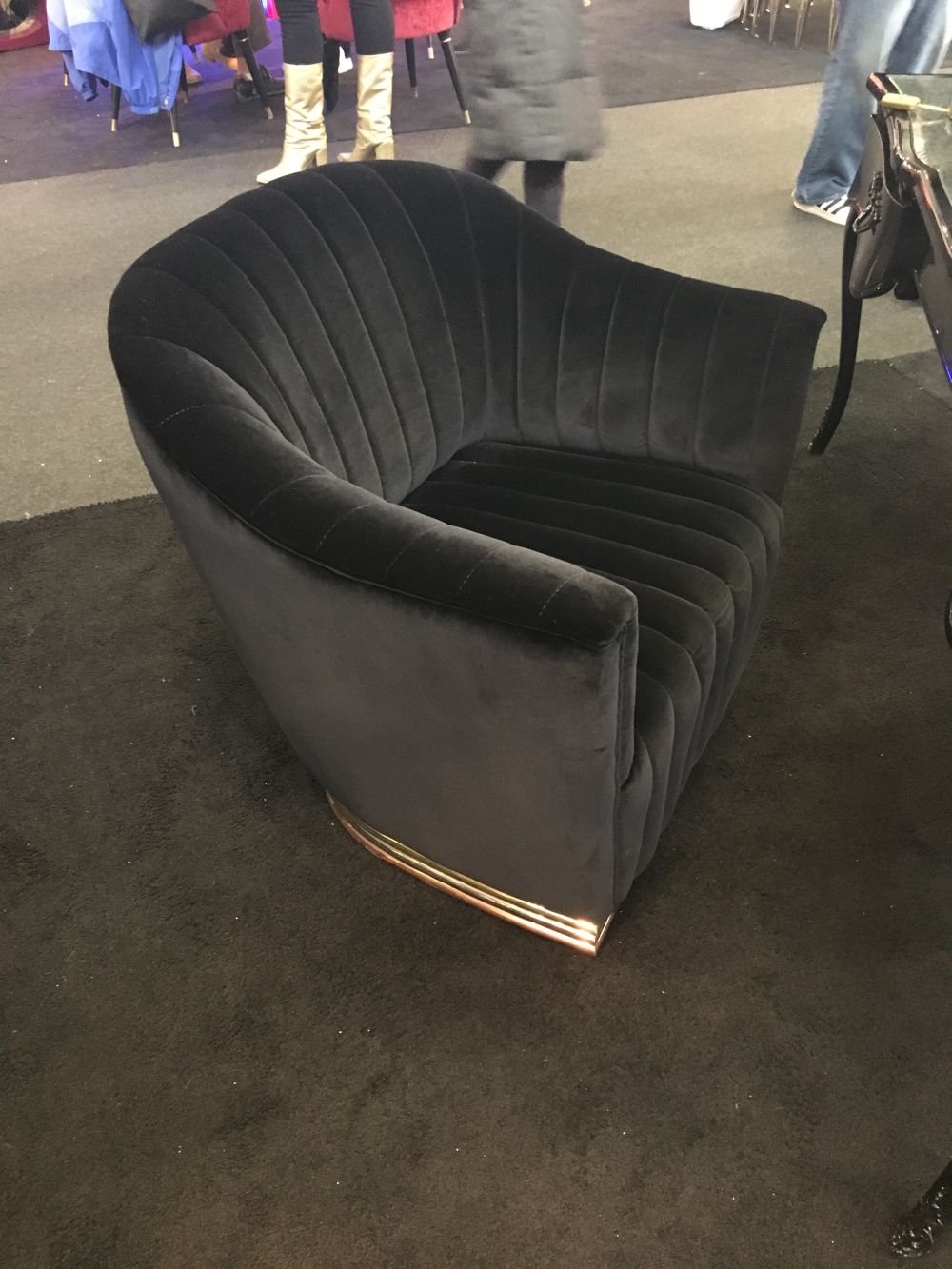 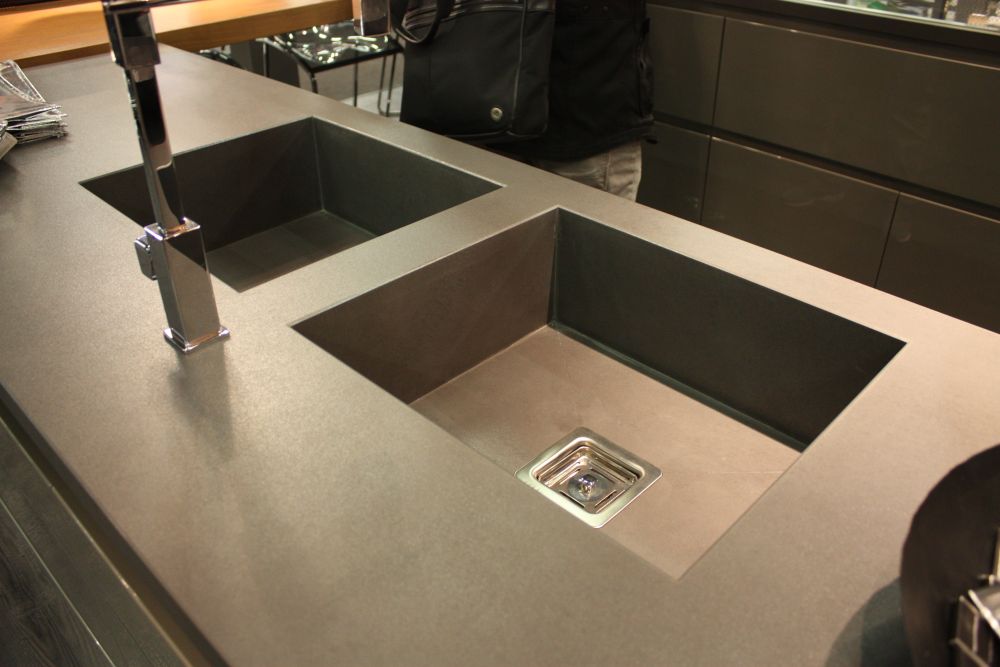 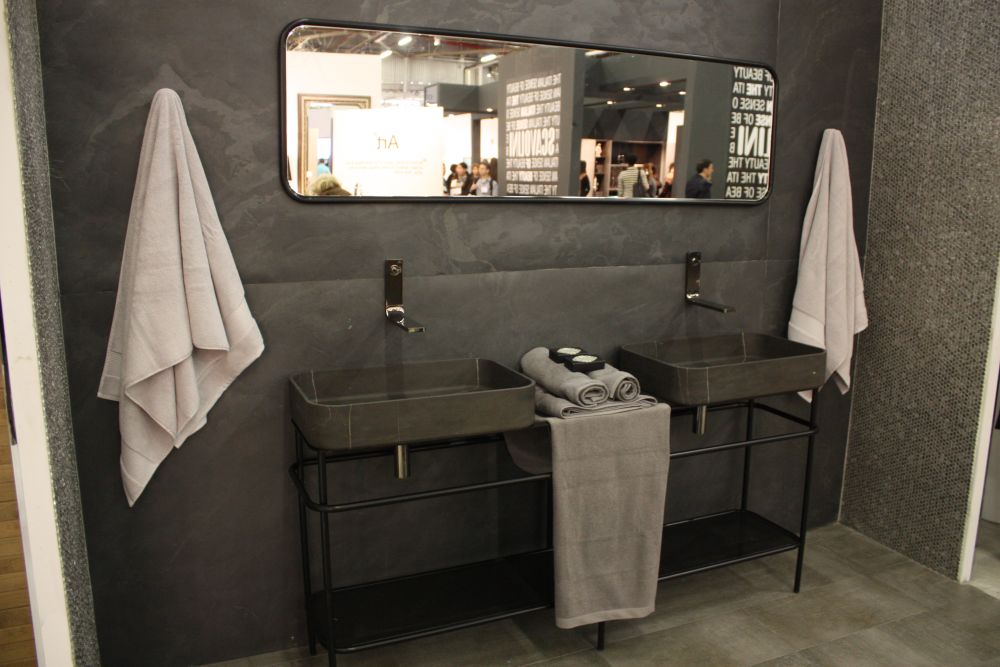 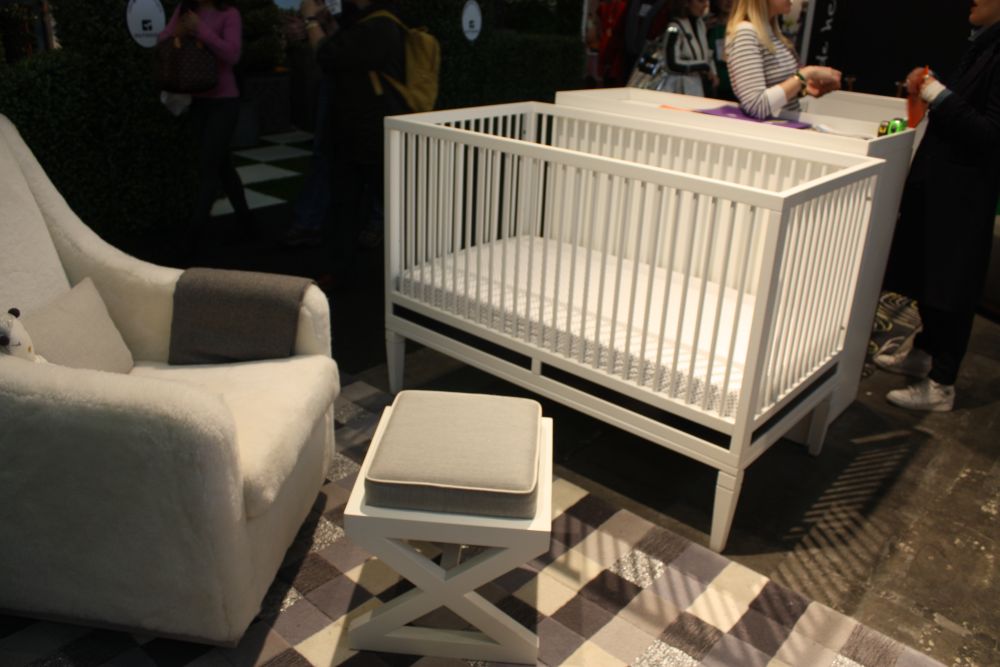 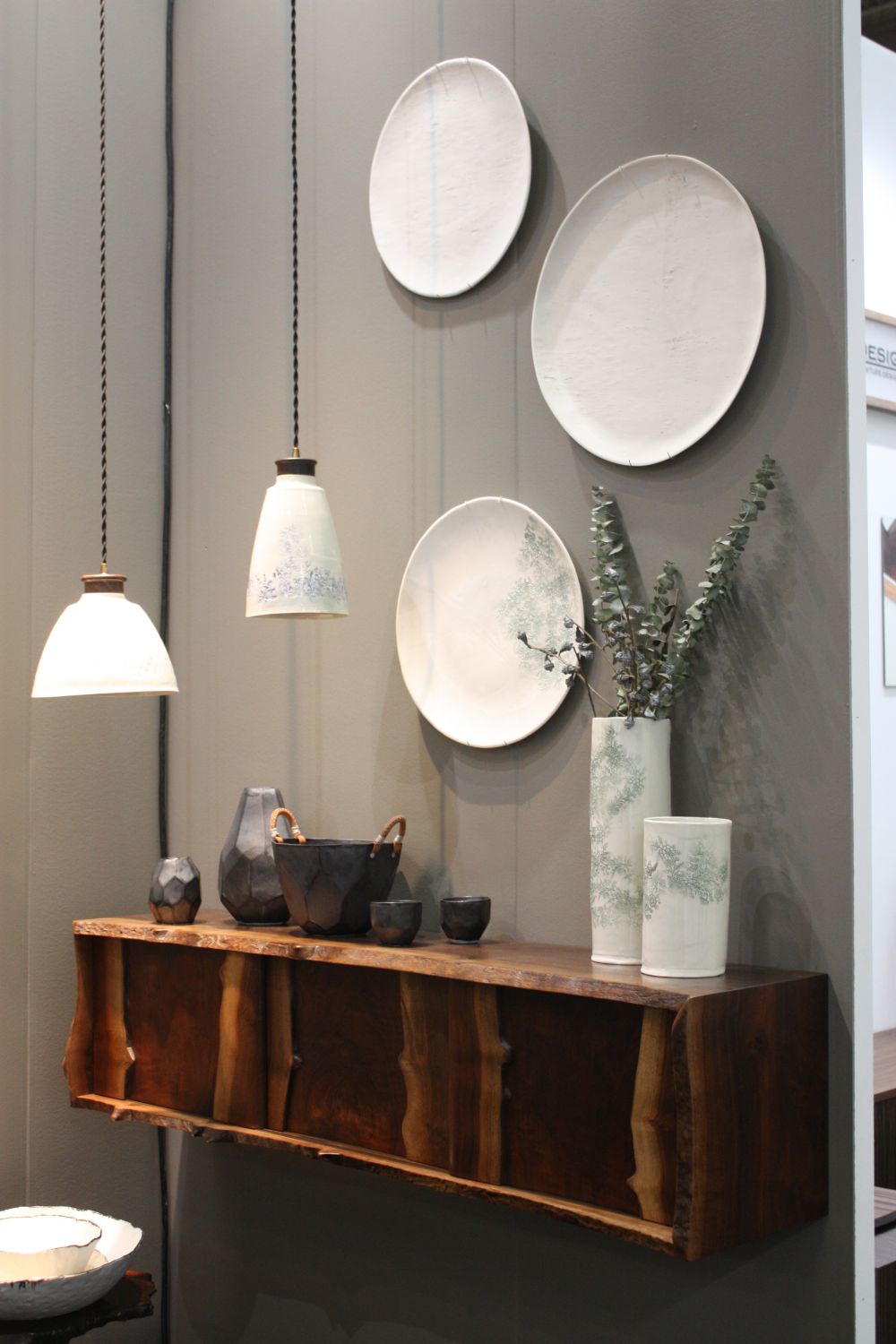 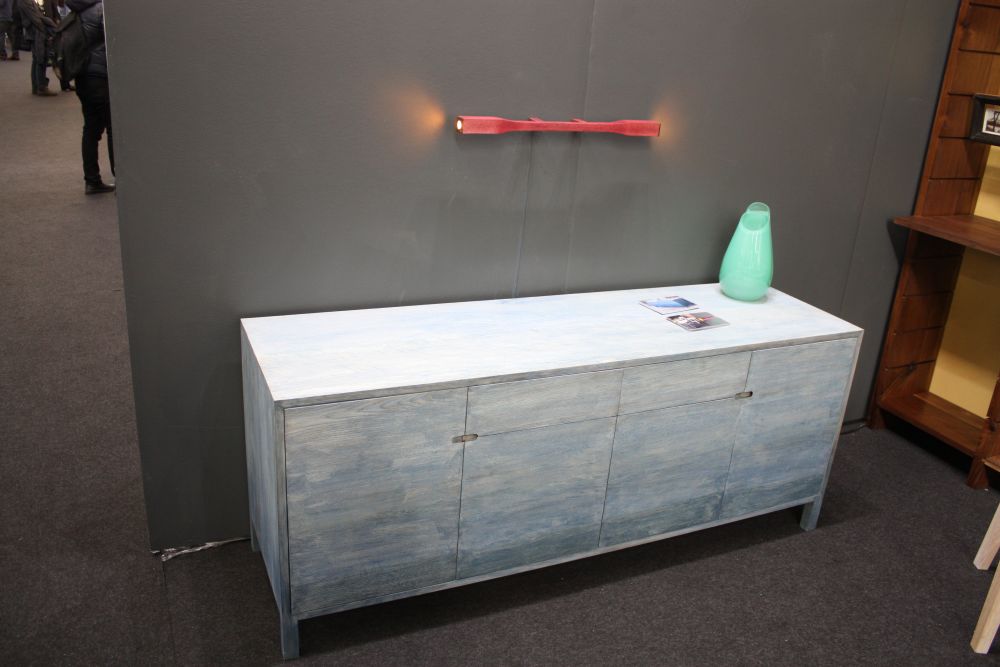 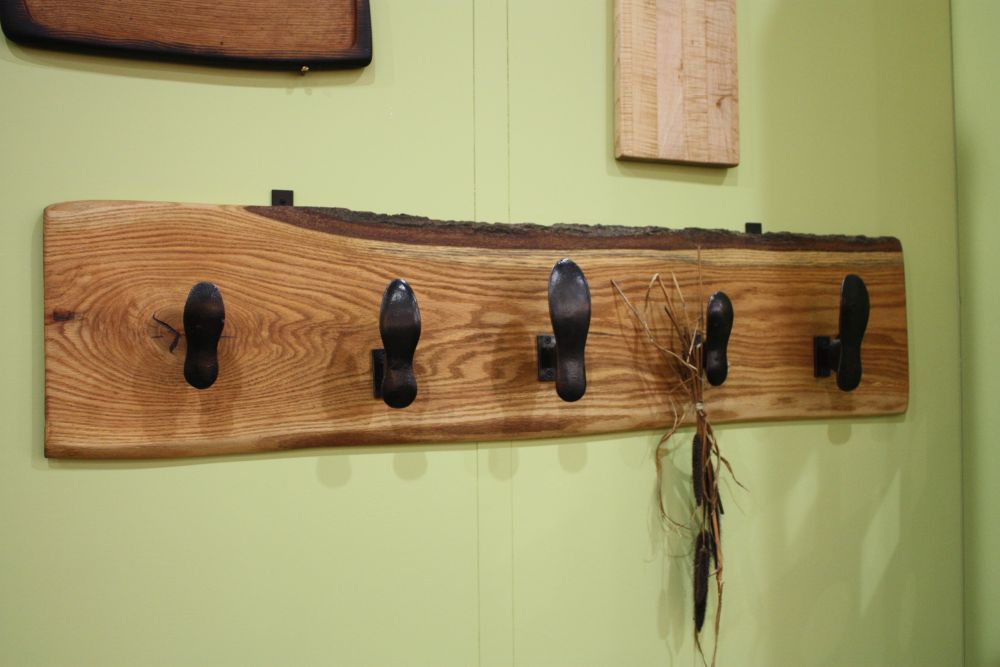 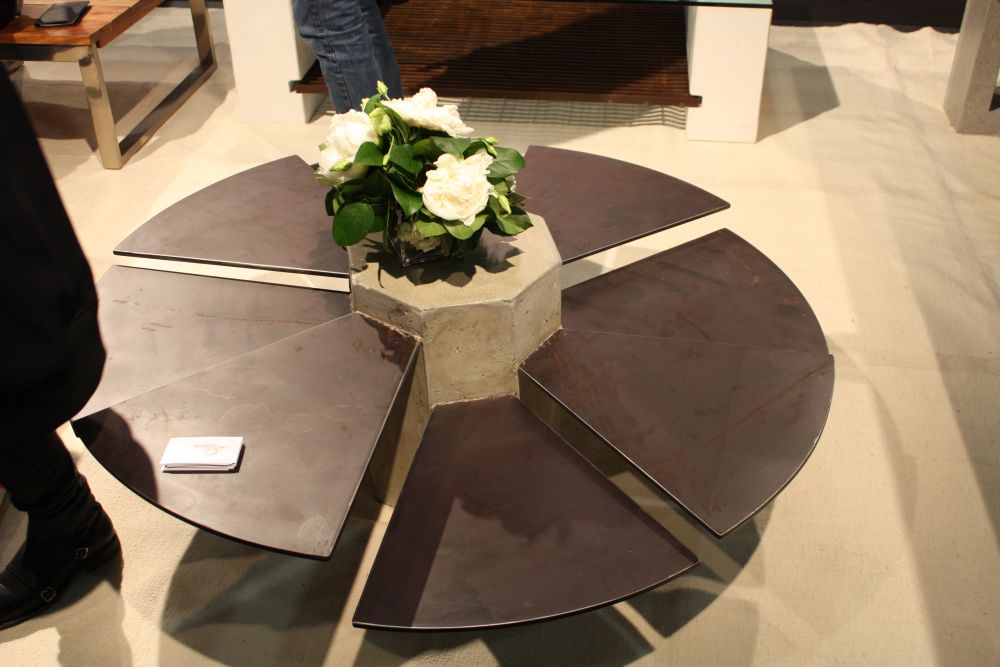 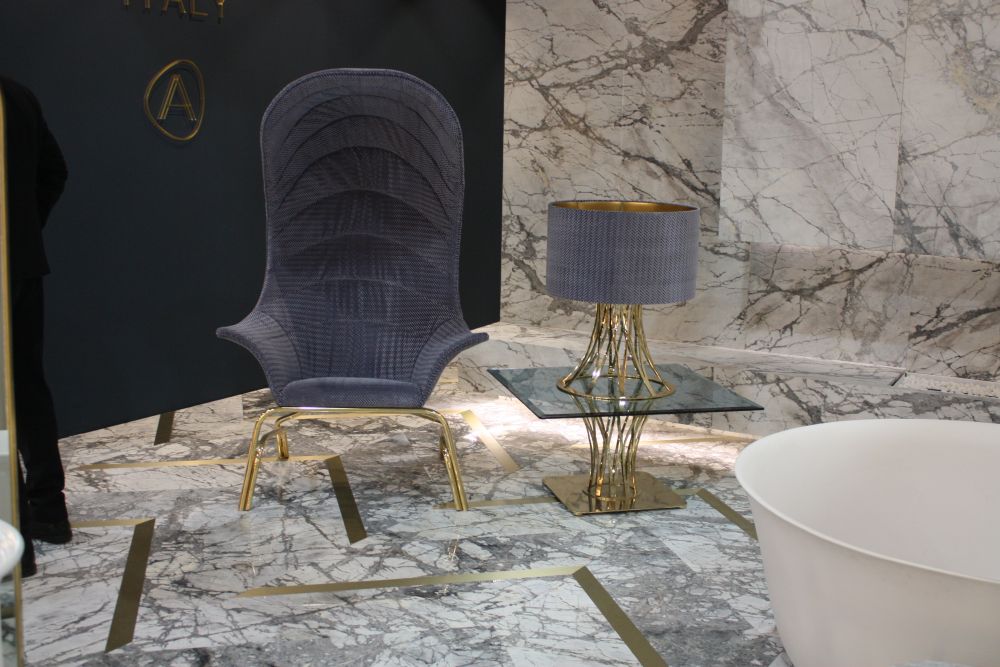 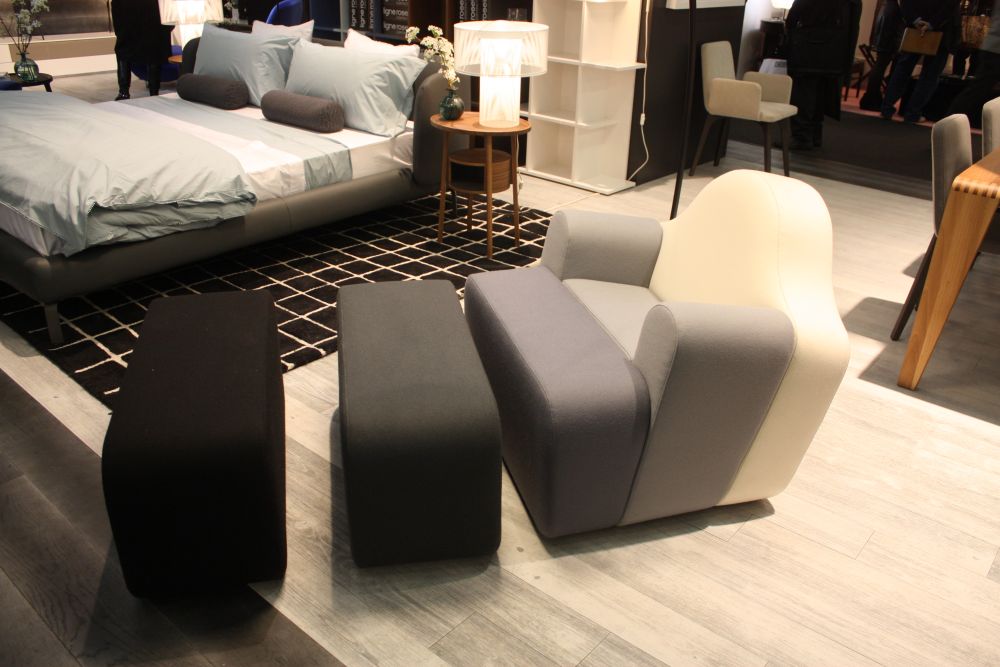 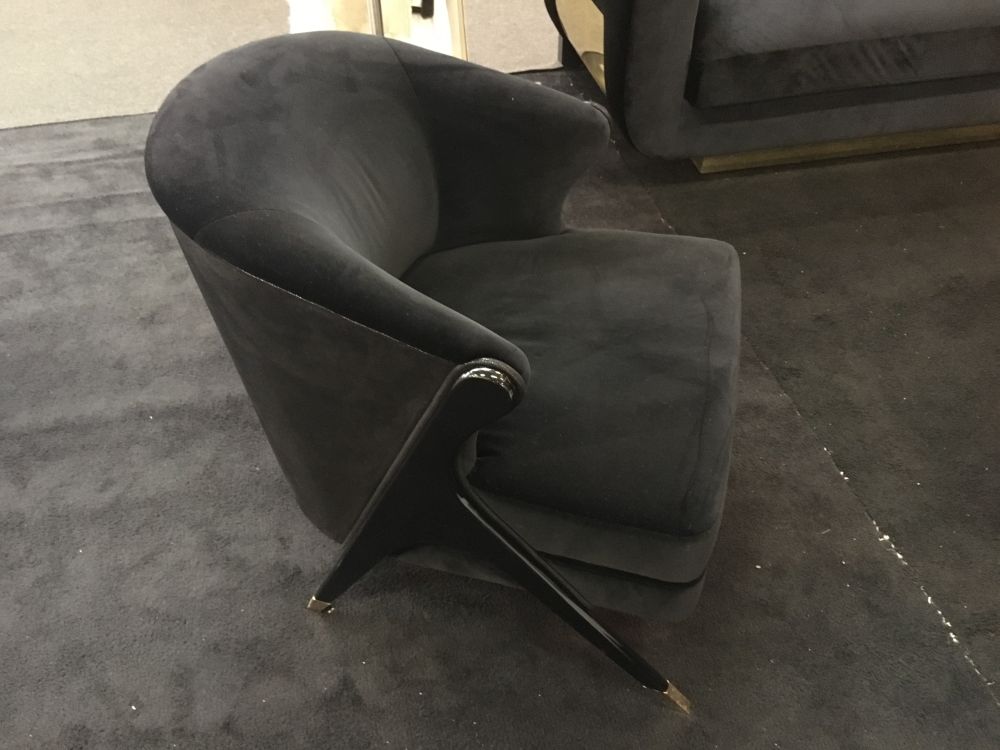 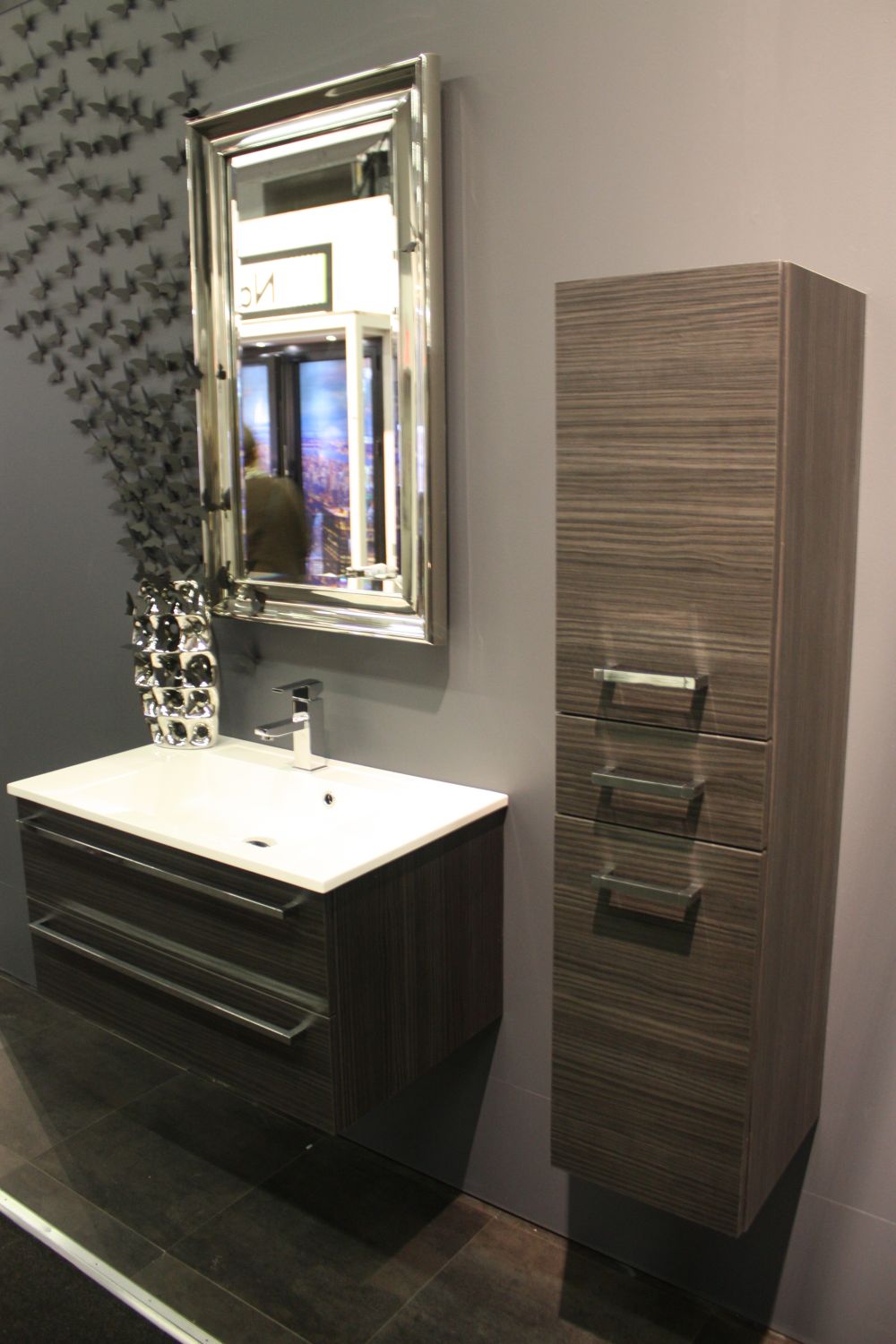 Did you know that the first recorded use of “gray” as a color name in English was in 700AD?. What’s amazing to me is that over the nearly one-and-a-half millennia since then, gray continues to be popular, maybe now more than ever. “People like to use gray because it provides a neutral, disappearing background to accent colours,” explains smart paint-makers Little Greene’s Andy Greenall.

Which is all well and good; Gray is a spell-binding color in interior design that we’ve all had plenty of time to study (like in this article on shades of gray, for example). Here, though, we’re going to be taking a closer look at the dark side – that half of the gray spectrum that leans much more closely toward black than to white. We’ll be looking specifically at dark gray in interiors, and what makes this hue so desirable.

This ombre chair + ottoman (ottomans? ottomen?) demonstrates beautifully the shades we’ll be examining. Of course, there’s gray, which is the color right at the end of the actual chair itself and is universally used as the standard for gray because it sits on the line between white and black precisely in the center. The next darkest shade is similar to Davy’s Gray (after Henry Davy), which is made from powdered slate, iron oxide, and carbon black. The last piece of this chair-ottoman setup is called Jet, which is quite close to black but isn’t a true black.

One more word about gray as an individual spectrum: Achromatic grays are true grays; that is, on the line from white to black, they make up each point in between. These grays have precisely equal RGB (red, green, and blue) values. Alternately, variations of gray include the achromatic grayscale shades as well as nearby colors (which still appear “gray” but have color-specific undertones) with “low colorfulness”.

Dark Gray as Visual Pop or Punctuation – Andy Greenall also says, “You can inject a bit of colour and use a gray backdrop, making it an easy template with which to work” – Telegraph.co.uk. We couldn’t agree more with this sentiment, although we believe it can work in the opposite way as well. Dark gray can be added as the pop in a room filled with lighter, airier colorful tints to balance out the other colors and, in turn, make those colors easy to work with in the design scheme overall.

Elegant Dark Gray Walls – Dark gray walls create an elegant yet subdued background to lighter pieces. Dark gray walls have a similar dramatic effect as black walls, but with a much softened aesthetic and, thus, broader appeal. Lighter tinted and colorful objects can be very few while still packing a solid visual punch when placed against a dark gray wall, as this vignette illustrates beautifully.

Pops of White on Dark Gray – While this wall color doesn’t appear entirely dark gray in this photo due to lighting, it does illustrate an important decorating strategy, which is this: solid white shapes and silhouettes absolutely pop against dark gray backdrops. Often, the most effective way to incorporate a dark gray backdrop into your home is through wall color. Notice how the natural wood shelving underneath warms up the look overall.

Dark Gray as a Grounding Force – Dark gray plays a key role in those spaces that require a dark color to remain grounded but in which black itself comes off as a little too harsh or too much. A nursery might be one such room. Using dark gray, such as charcoal, in parts here and there throughout the space will go a long way in helping the space keep from floating away aesthetically, in feeling substantive, but still retaining its soft sweetness.

Urban Dark Gray – Dark gray is the color that gives industrial, urban design its look. Without dark gray to carry home that worn, factory, hard-working aesthetic, the style would really feel quite incomplete and weak. Industrial style can be done in a chic way, such as in this glamorously raw bathroom, which creates a space that incorporates the best of both worlds.

Dark Gray is Utilitarian – Dark gray is fundamentally utilitarian – it’s completely, utterly neutral, but in a dark way that is meant to camouflage grime and grit. This makes it an excellent color option for function-rich spaces, such as the kitchen. (Not that your kitchen will have loads of grime and grit, of course. Just speaking historically.)

Metals make Dark Gray Pop – Simple dark gray is given life with a pop of metallic shine at this chair’s base. Also, because of the velvety texture of the upholstery, stitching details show up despite the dark gray color, due to the variation of light reflection off the fabric.

Dark Gray + Black – Dark gray provides a sophisticated and supportive foundation to black show-stoppers. The color is different enough from black to allow the main feature to pop, but it’s not so much in contrast that the focus is on the difference between colors.

Dark Gray and Copper – As one of the warmest of the metals, aesthetically speaking, the bright and shiny red-orange look of copper contrasts so beautifully with dark gray. This is an excellent combination to consider to add a bit of warmth and personality to a highly industrial or utilitarian space or a way to provide visual depth and substance to a glitzy, energy-infused one.