Love Homedit? Follow us
By Vera Dordick | Published on Dec 24, 2018
of 13
Christmas Tree Santa Ornaments - Santa ornaments are an easy alternative to large figures.
Snowman as Santa - Both Santas and snowmen are chubby and cheerful.
Silver Santa Christmas - Toys make this an updated version of Santa.
White minimalist Santa
Small Red Santa Christmas - This is most like the iconic version of Santa.
Santa with Toy Bag - Modern Santas have a bag of toys.
Magical funky Santa - Some Santas defy categorization.
Old fashioned jeweled santa - Natural-colored fur plays down the glitz of this Santa's outfit.
Christmas Santa with wine barrel - A gentlemanly outfit makes this Santa pretty stylish.
Golden Santa for Christmas Decor - Embroidery and plenty of jewels make this an opulent Santa.
Drinking Santa for Christmas - A Santa with wine is good party decor.
Santa with silver Tree - Elements of old and new are part of this Santa's outfit.
Big Hat Santa Old-Fashioned Elf - An elf-like Santa has old-fashioned charm.
Add Charm to Holiday Decorating with Santa Claus
Buy Now 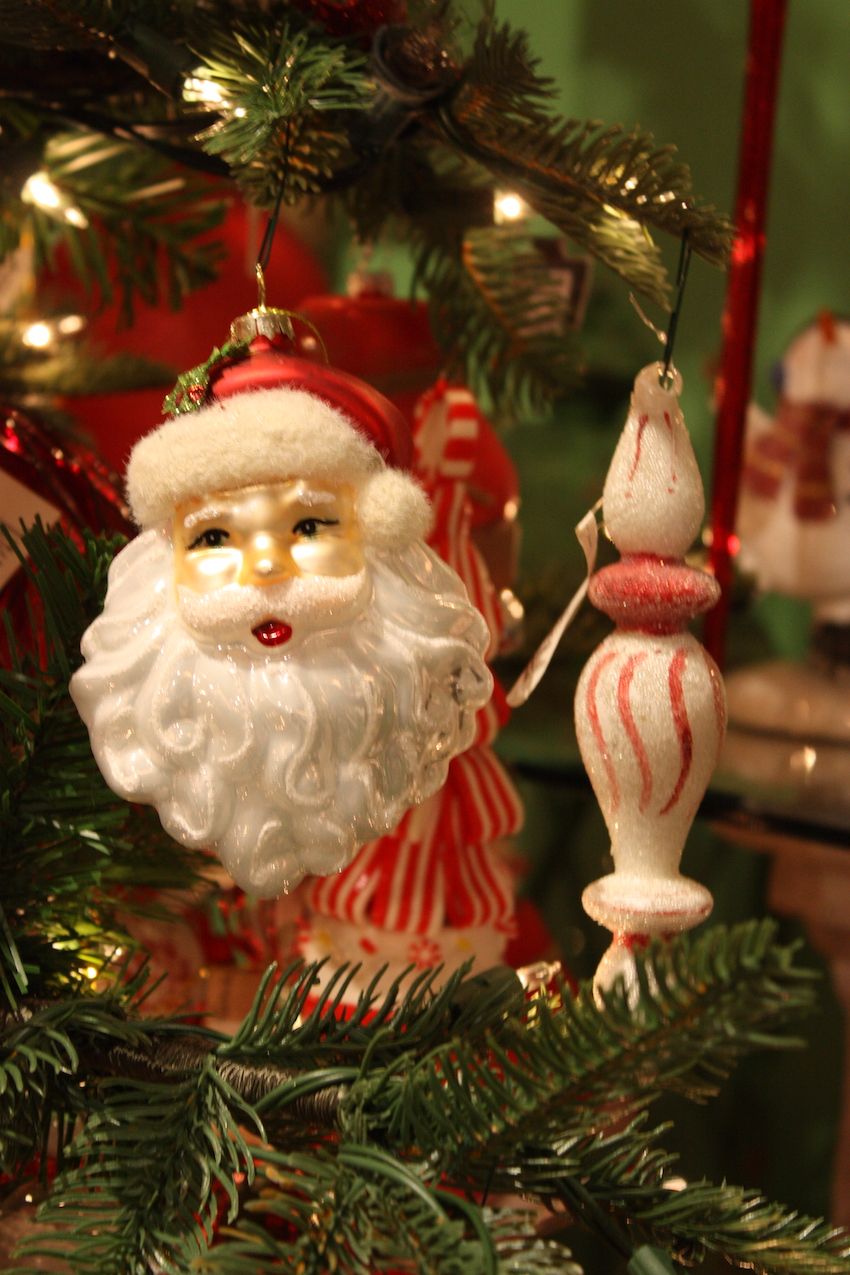 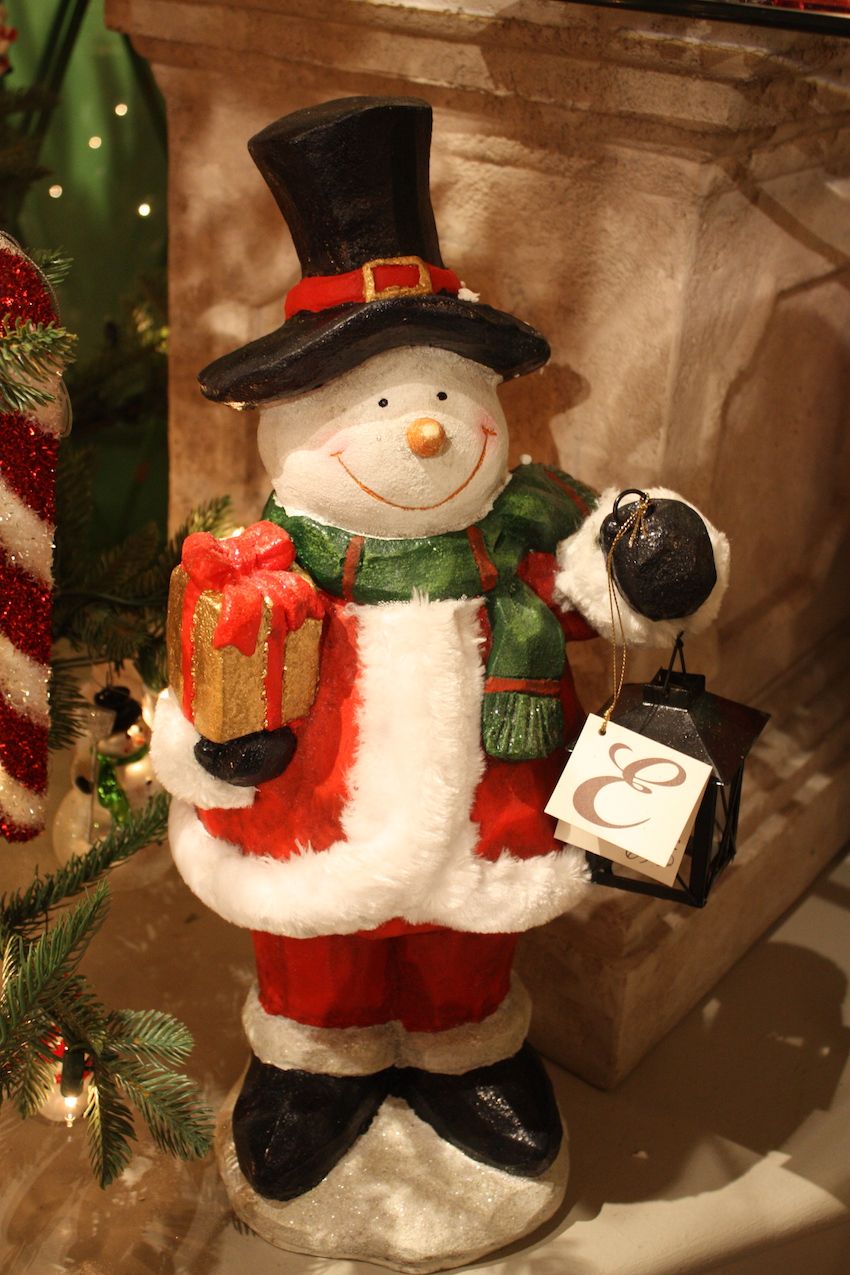 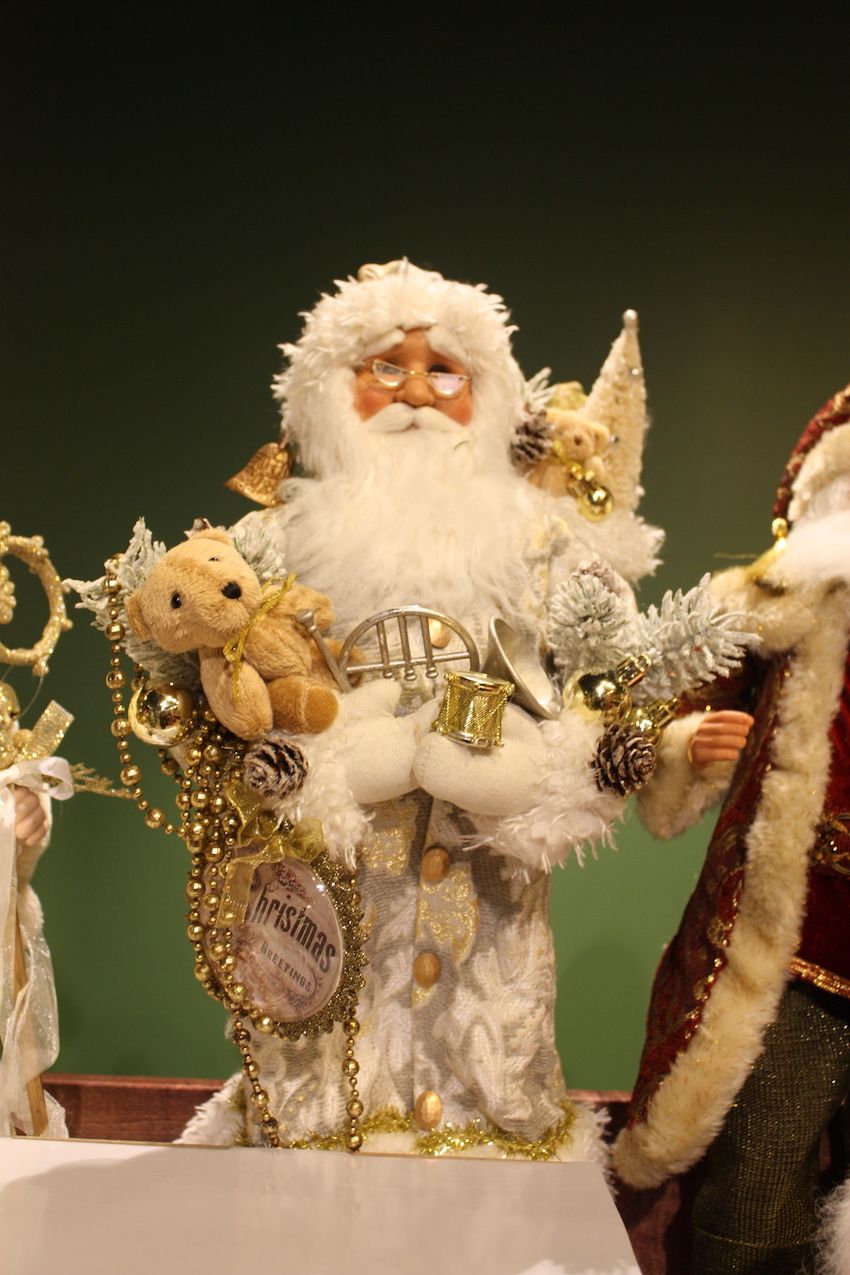 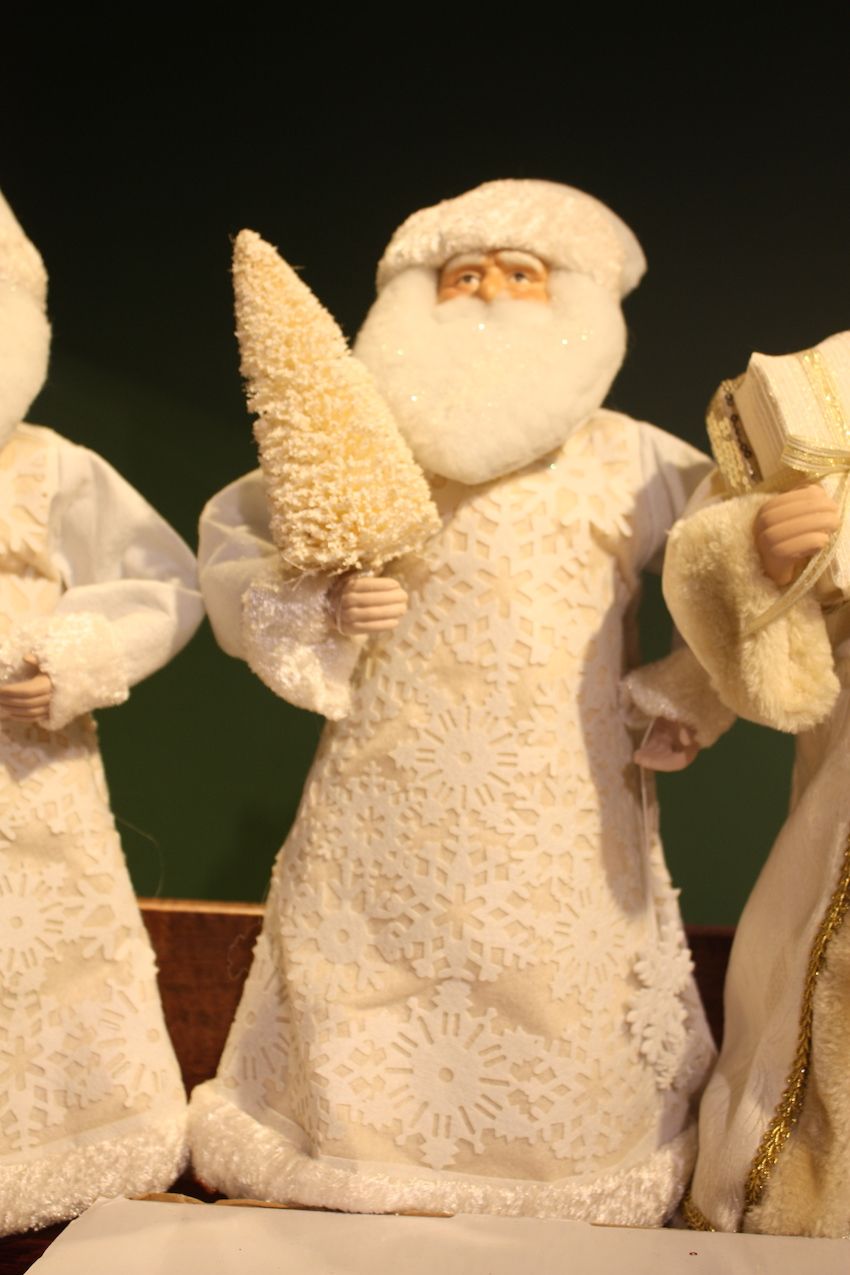 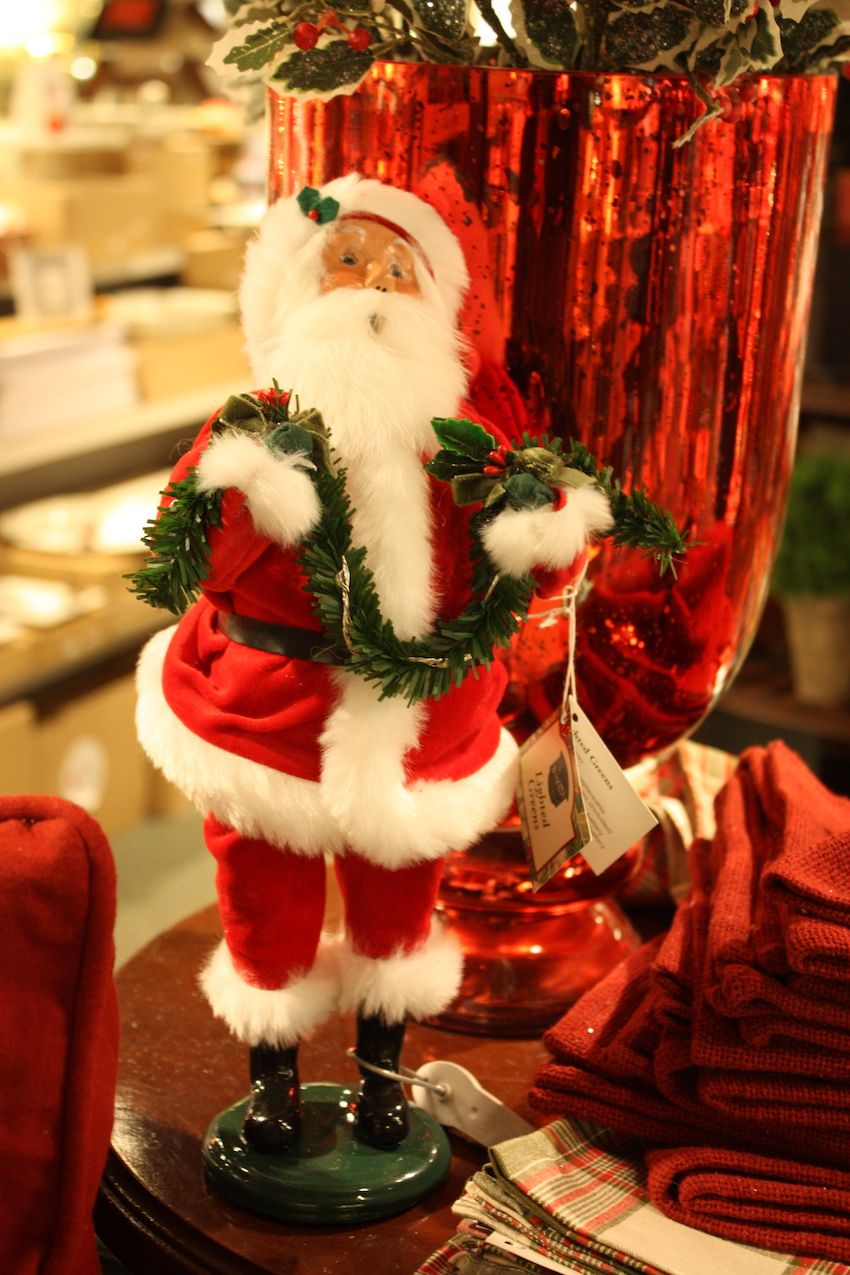 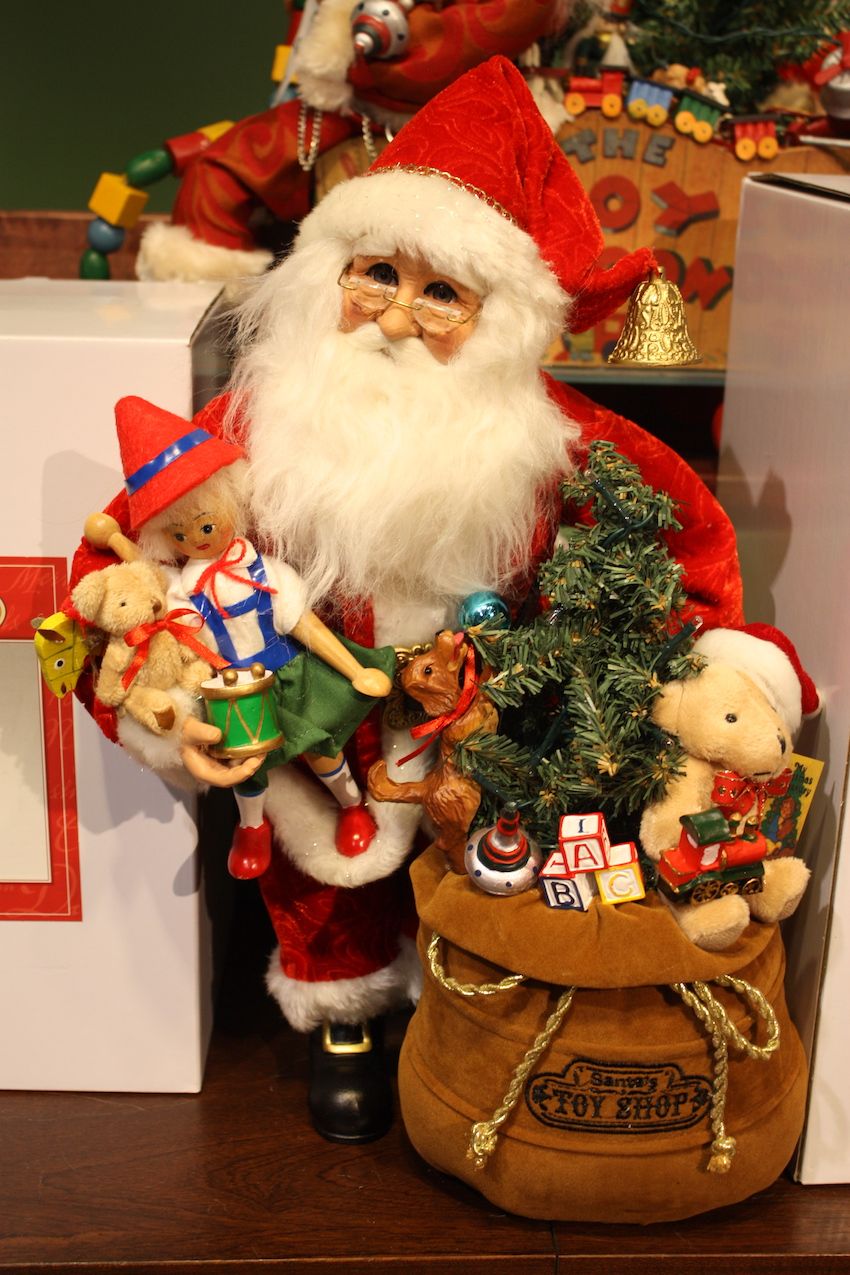 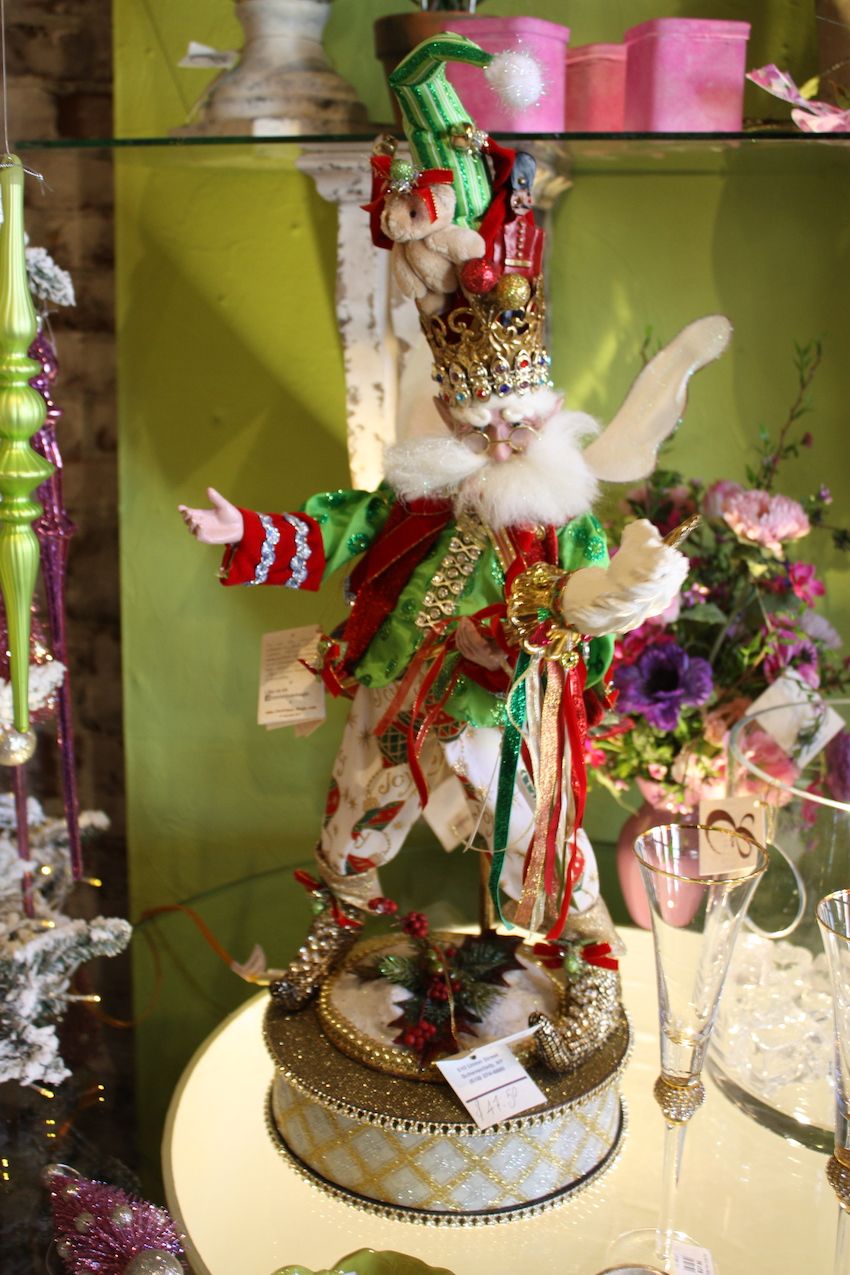 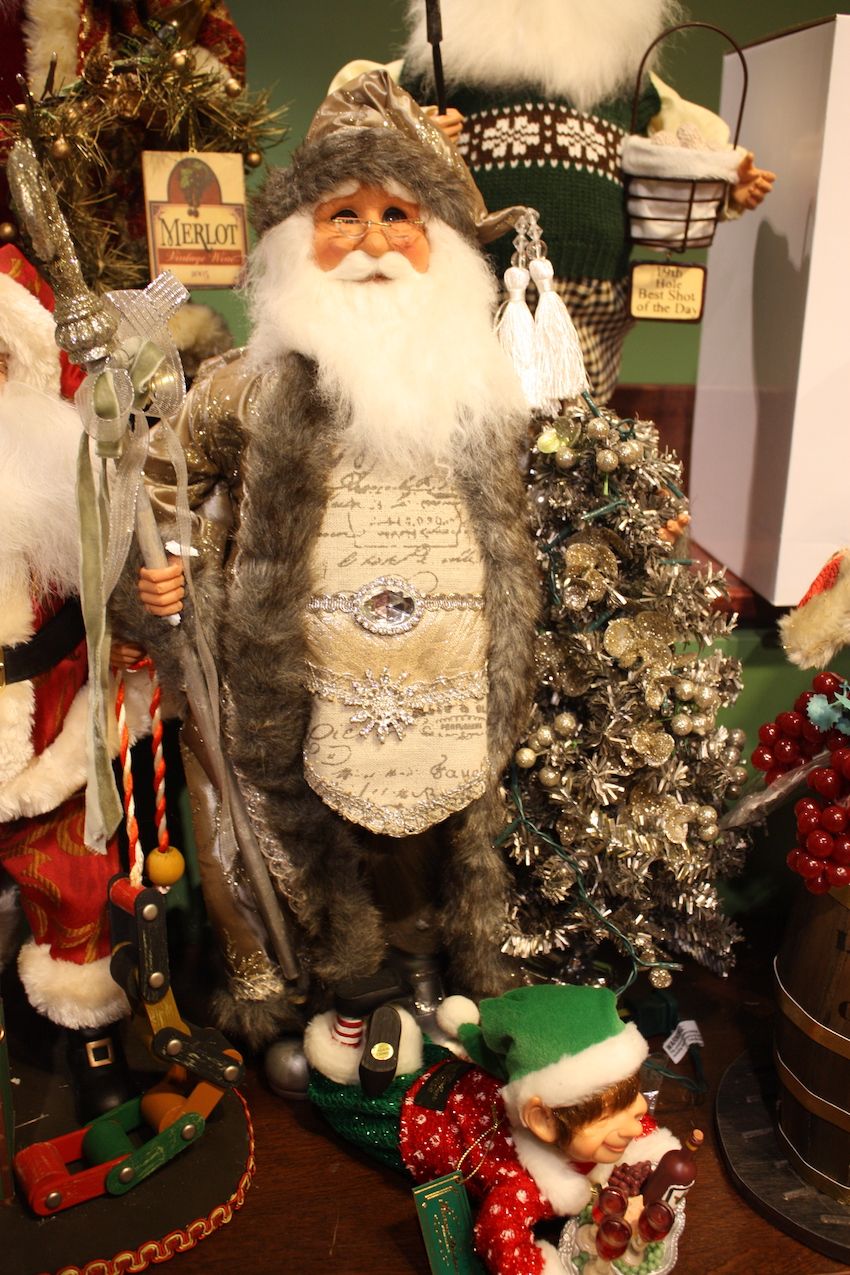 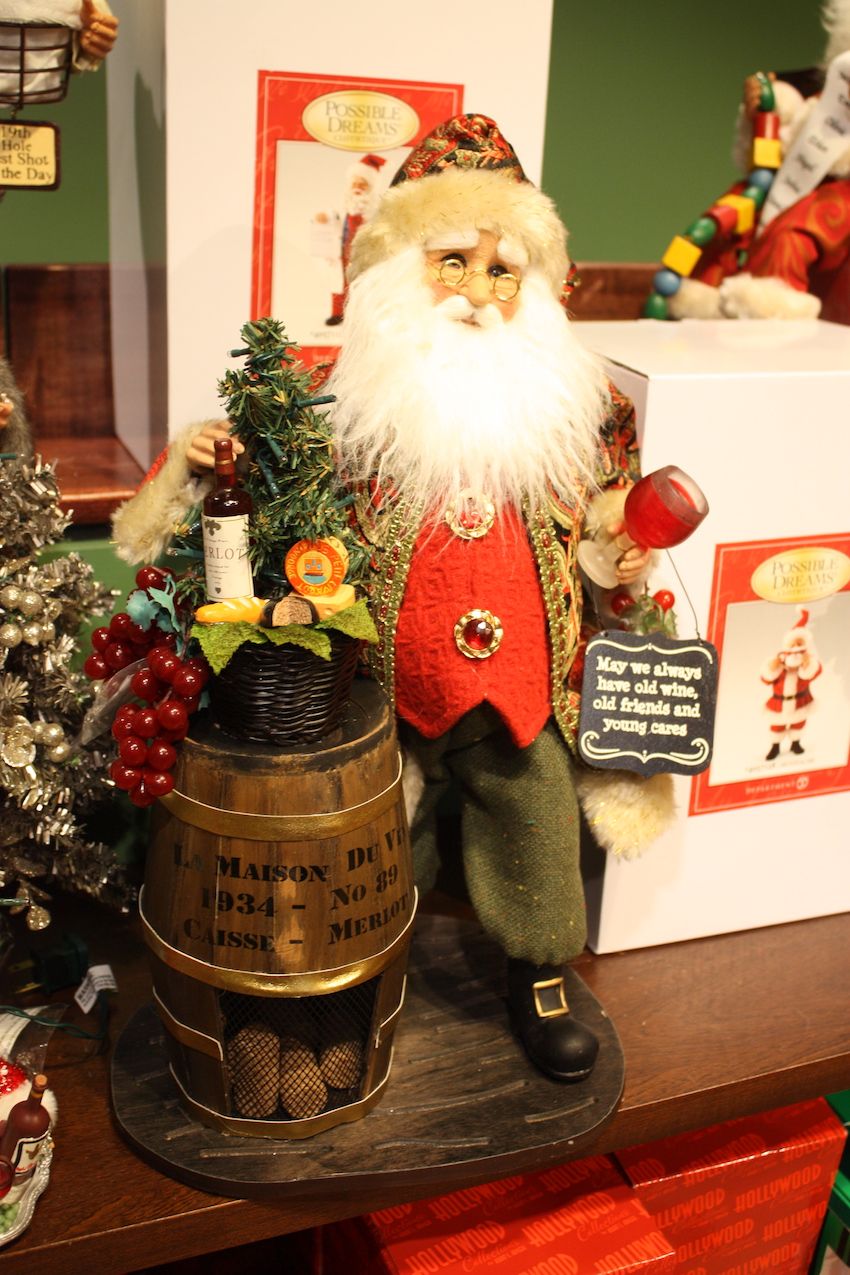 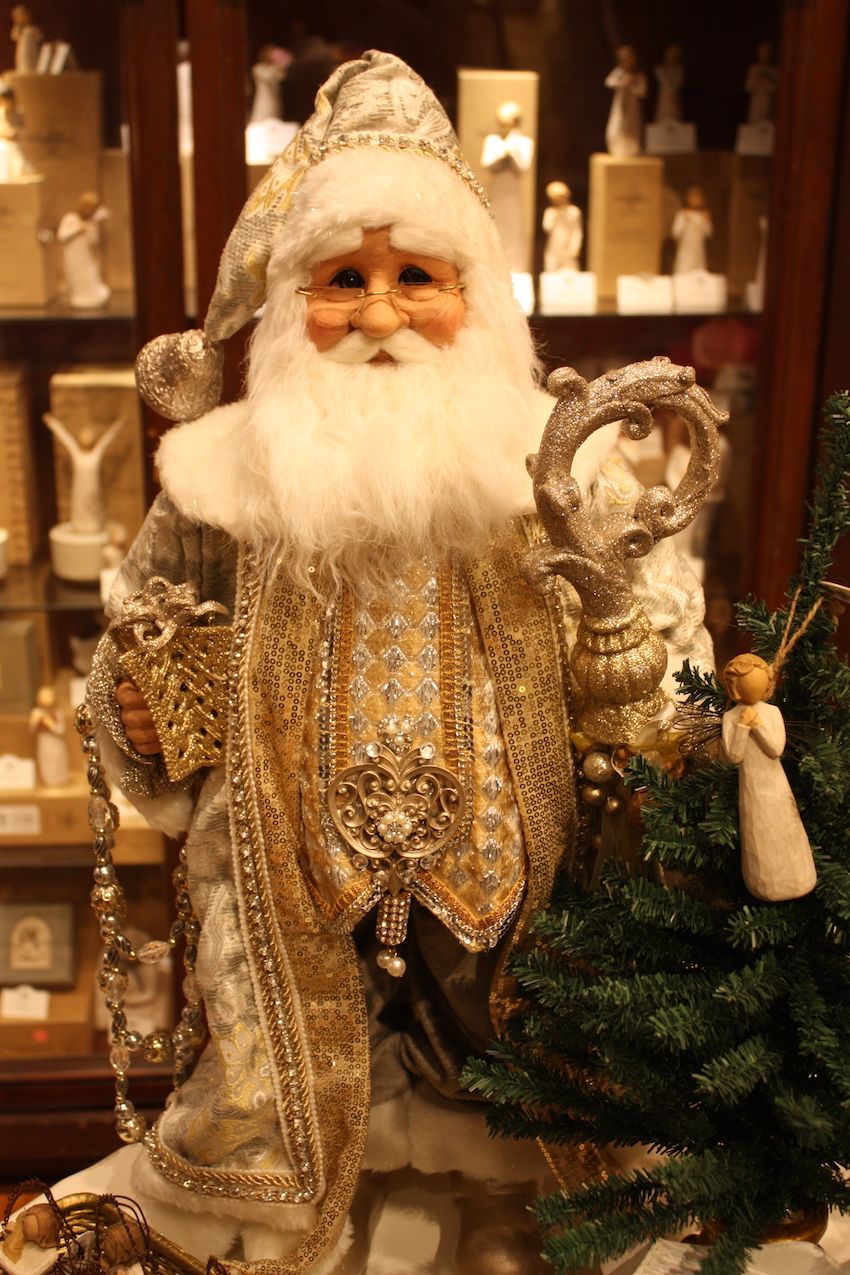 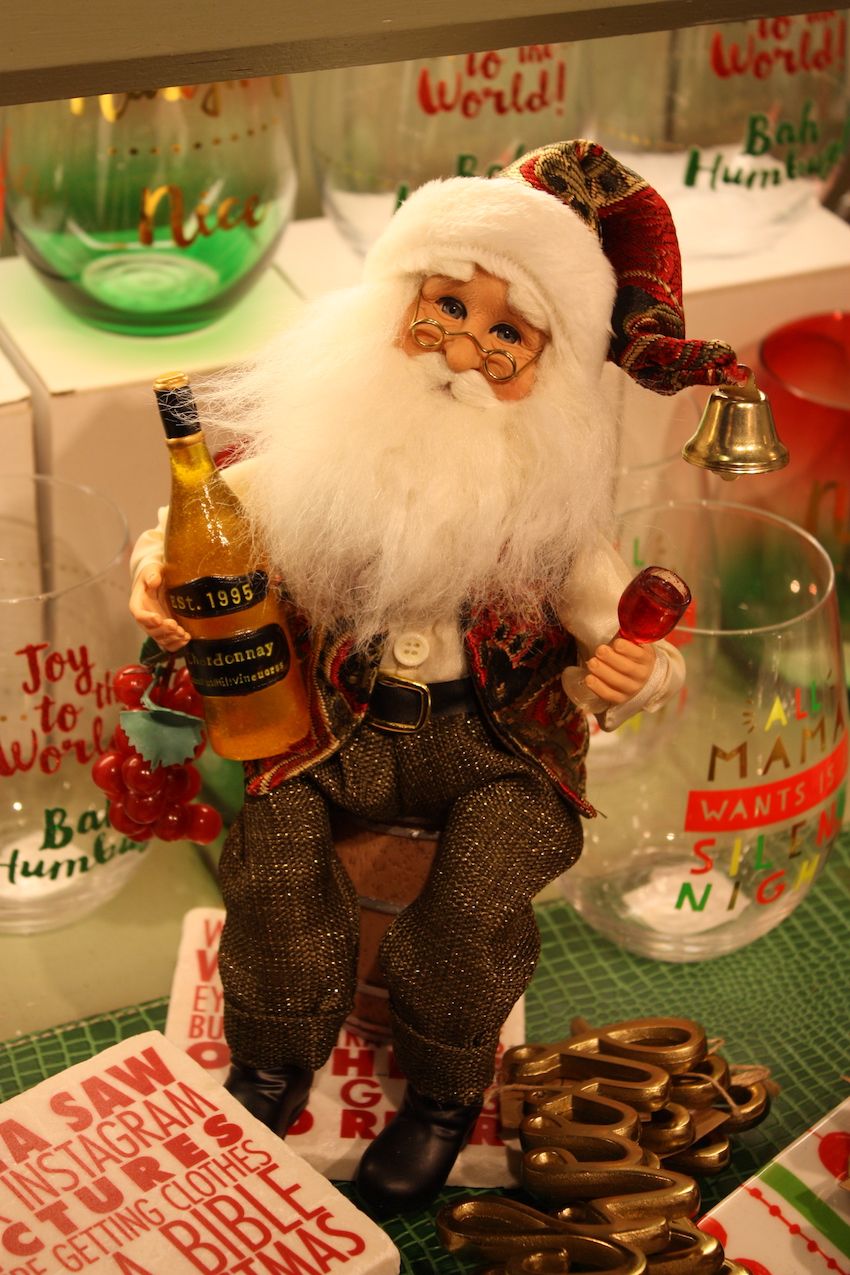 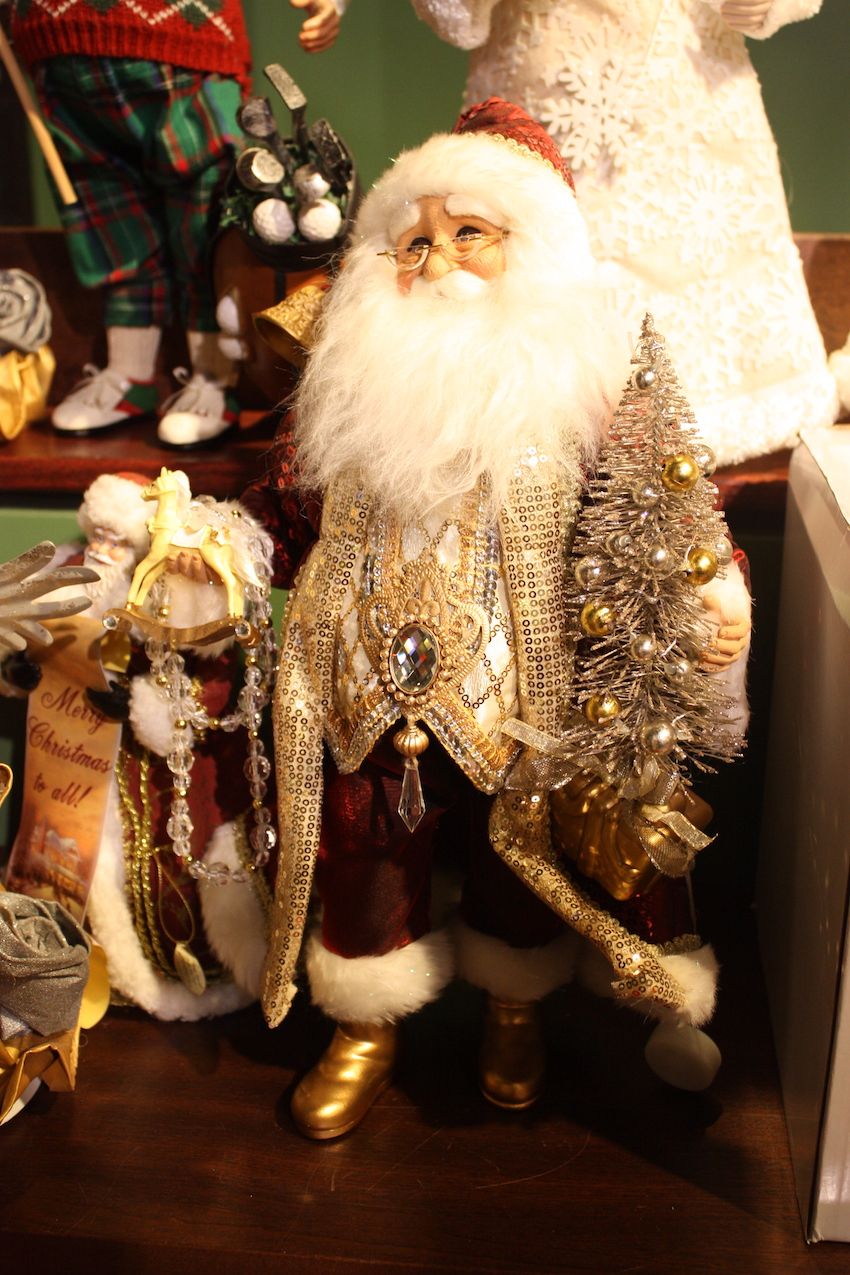 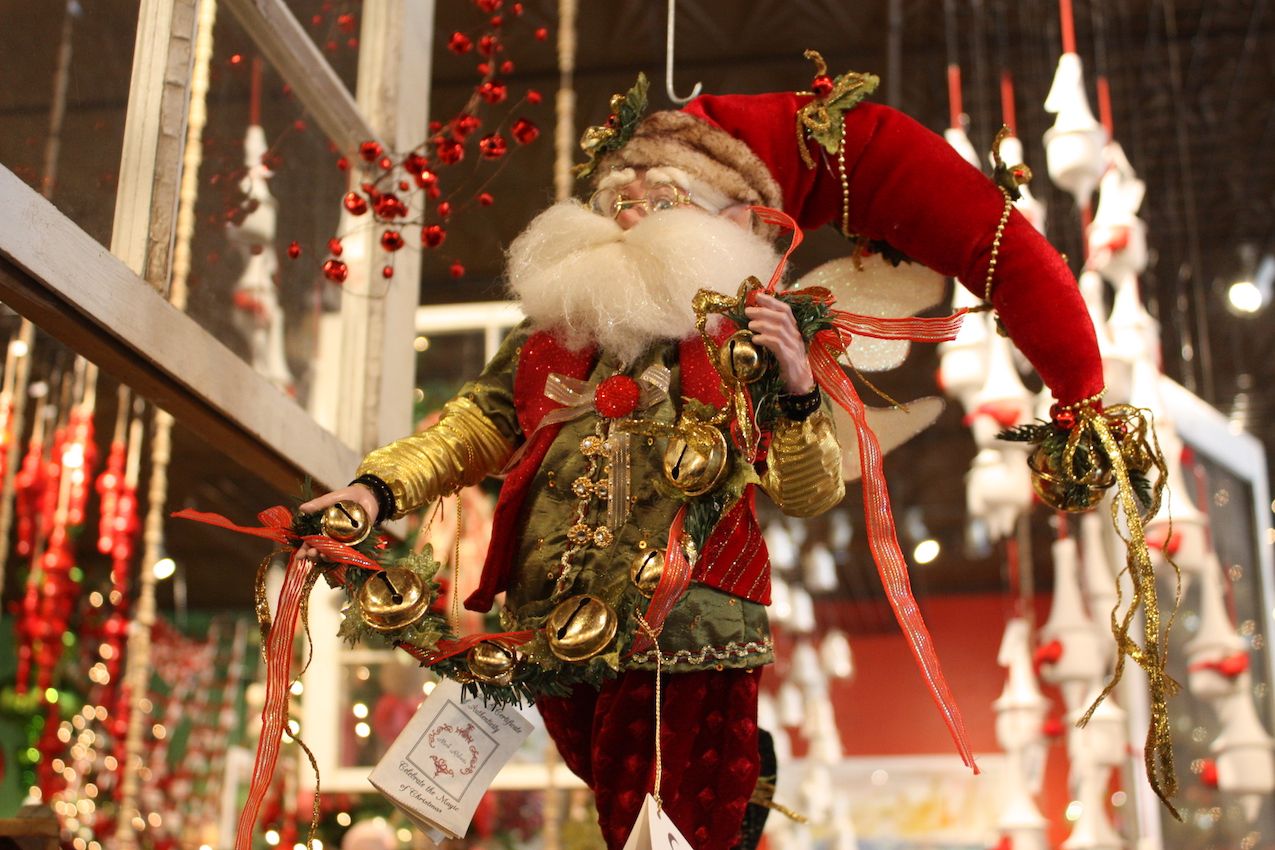 St. Nicholas, Sinter Klaas, Santa — whatever he’s called, he is a Christmas staple and popular figure for holiday decor. Countless versions and styles — from old-fashioned to rustic to modern and bejeweled — are available to add this “jolly old elf” to your holiday decorating.

The legend of St. Nicholas can be traced back to the 3rd century and the popular namesake saint. He was known for giving all his possessions away and traveling around and helping the poor. Fast forward to today, the modern version of Santa Claus actually originated with the famous poem “Twas the Night before Christmas was published in 1822. Whether you prefer the old-fashioned fellow or like more modern iterations, there’s a Santa to fit your decor whims. Check these out:

Not so chubby and more elf-like, this Santa Claus is old-fashioned with a jester-like flair. From his long and pointy hat down to his stylish red pants, he’s elegantly bedecked. Instead of a white brim on his hat, he has a ring of fur, and the whole thing is wrapped in gold beads and adorned with holly and golden ribbons. His green and red jacket — so different from today’s modern stereotype — is embroidered with embellishments and finished with golden sleeves, In his hands, he holds more ribbons and holly, along with brass Christmas bells. An old-world Sant like this one is ideal for a traditional decorating scheme. This Santa — along with many the figures included here — are from Wit’s End Giftique.

This particular Santa likes to party and he comes carrying his own glass and bottle of Chardonnay. A cute decor element for a wine lover — or for a holiday cocktail party — this fellow is a Santa for the adults. His garb falls somewhere between midcentury American and current modern. His hat may have the white brim, but the rest is an elegant brocade, with the flourish of a bell. Santas like this one, that are paired with themed accessories are more common today than ever.

A little larger and with an expanded setting, this Santa also comes with his own wine. He’s a right jolly old elf that is a bit more like the red-coated guy we know and love today, but with some nice vintage clothing.

This bejeweled Santa has an old — and old world — look about him. Dressed head to toe in cream and gold, he is stately and a little more serious than most. The heavily embroidered and jeweled vest, along with the fur-trimmed coat, make this a very fancy Santa that is meant to go with opulent decor and a glamorous, glitzy Christmas display.

Similarly, this Santa wears a vest with some bling but instead tops it with a golden coat trimmed in a natural style of fur. He’s still a bit glam but also has a more natural feeling thanks to the color of the fur. His golden hat and walking stick are adorned with more modest ribbons. Overall, this Santa’s style is derived more from the days of the old saint than the modern man of today’s shopping malls and  TV movies. You’ll notice he has no bag of gifts, which did not feature in depictions of Santa until the 1800s.

With an old-world feel and modern-day Santa pants, this fellow is a mix of old and new. His coat and vest are opulently bejeweled but underneath, his pants are red and trimmed in white fur. You could call him a transitional Santa because he is bringing the two styles, which makes him perfect for transitional or contemporary decor.

This fun Santa defies description and just about the only traditional features are his bushy white beard and spectacles. His head is topped with a bejeweled crown, filled with toys and gifts, His clothes are red and green and have some jeweled trim, but his pants are decidedly a modern print. And just take a look at his golden elf-shaped boots!  This Santa sure has some attitude. You can find him at Experience and Creative Design.

This is the style of Santa Claus that children across America know and love, with his round belly, jolly look and bag full of toys. He’s the one conjured by the famous 1822 poem that parents still read to their kids today. According to the History Channel, the Christmas holiday was being rejuvenated in the early 19th century, and that’s when stores started to advertise Christmas shopping. By the time of the 1840s, newspapers were making special holiday advertisements for shopping and many often used the image of  Santa Claus, who had become very popular.

This guy may look a little plain compared to the other versions, but he is the most like today’s modern Santa Claus — with a bit of an old-school face. He’s not wearing spectacles and his rosy-cheeked face has a little upturned nose. His outfit is classic Santa, down to the shiny black boots.

Modern and a Little Angelic

A Santa Claus that is garbed in an all-white gown takes on a totally different look, even though this is a modern look. The simple garb, lack of color and no bag of toys give him a more angelic look. He could also be considered a snowy Santa thanks to the snowflakes on his fur-trimmed gown. Whatever you want to call him, he would be ideal for an understated or monochrome Christmas display.

Although this Santa may have a few old-world features, the bounty of toys he is carrying makes him a modern version. Either way, he’s less austere than the previous example and there’s a bit of bling in his coat and hat, along with strings of golden beads. He would still be ideal for an all-white Christmas display that can do with a little sparkle.

Maybe it’s their roly-poly shape, but snowmen dressed up as Santa Claus are a common decor item. If you’re looking for a fun rendition of Santa, the snowman version is a good bet. Kids and adults alike love this winter creation when it’s turned into Santa. This charming frosty man has the traditional snowman hat and carrot nose but is dressed in a Santa costume, complete with boots and gloves.

If there’s no space for a big Santa Claus in your Christmas decor, adding Santa ornaments on the tree is an easy way to include the iconic figure. Just like the large figures, ornaments come in different styles and sizes. Some are just heads and others are full-body Santas. With the variety available, it’s easy to find some that fit your style of tree decor.

No matter how Santa Claus is included in Christmas decorating, he’s a very popular element with both children and adults. A Santa figure can be part of a larger decorating layout or can add a touch of holiday cheer to a room on his own. Invite Santa home for Christmas this year and see how he enlivens your decorating.