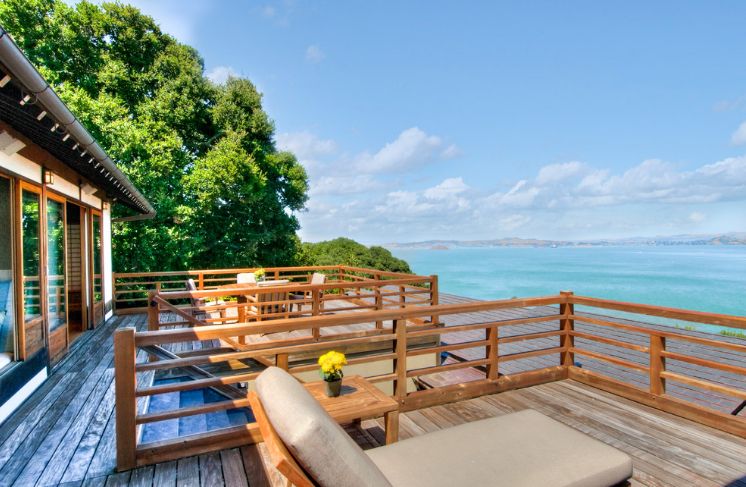 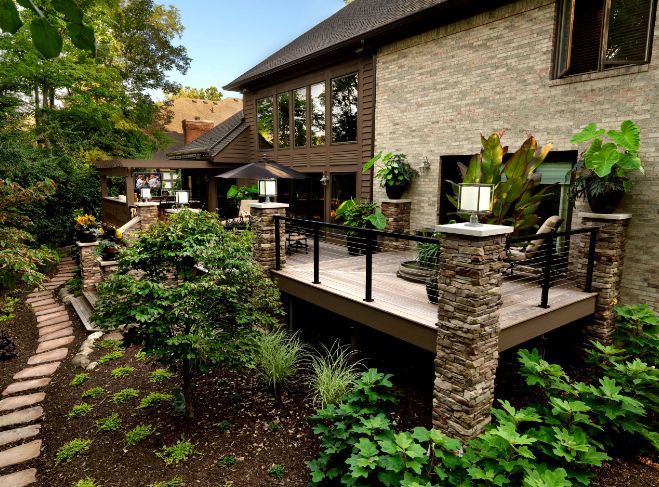 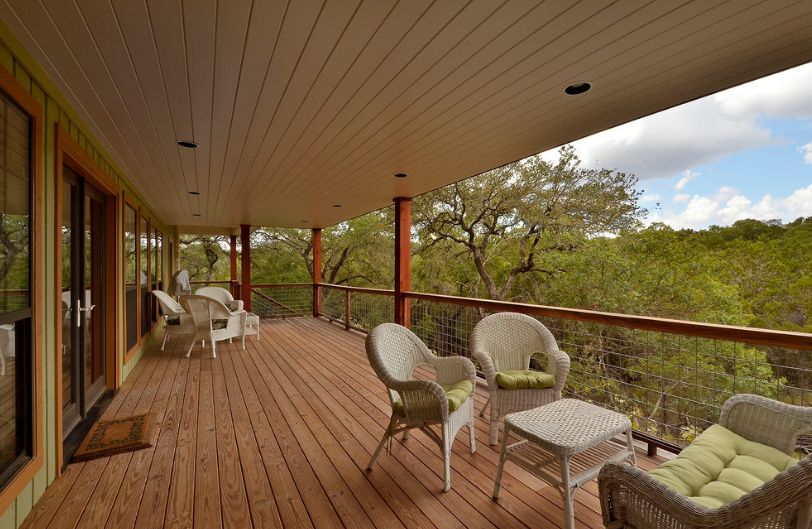 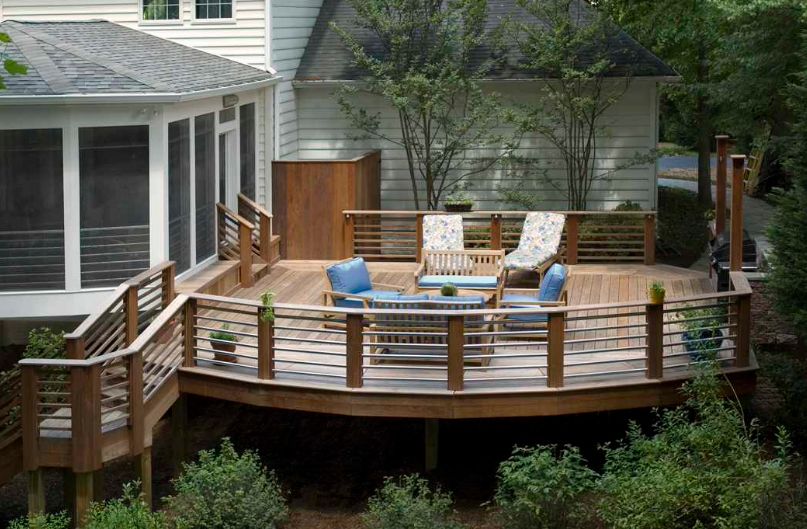 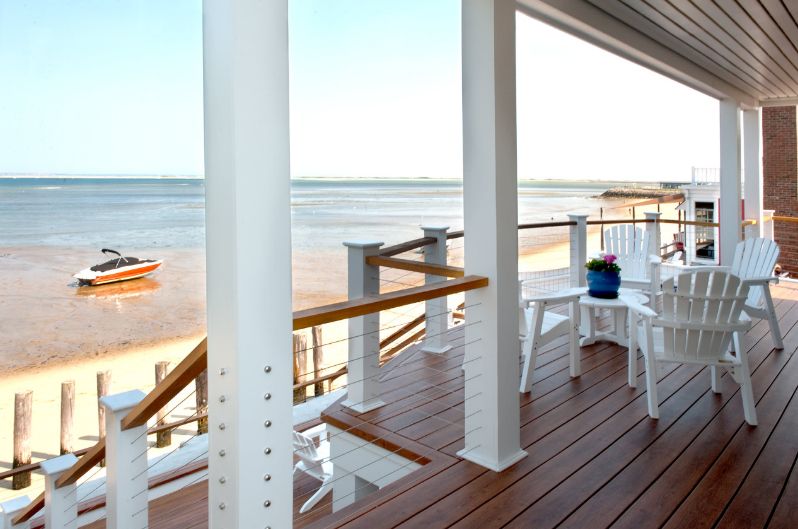 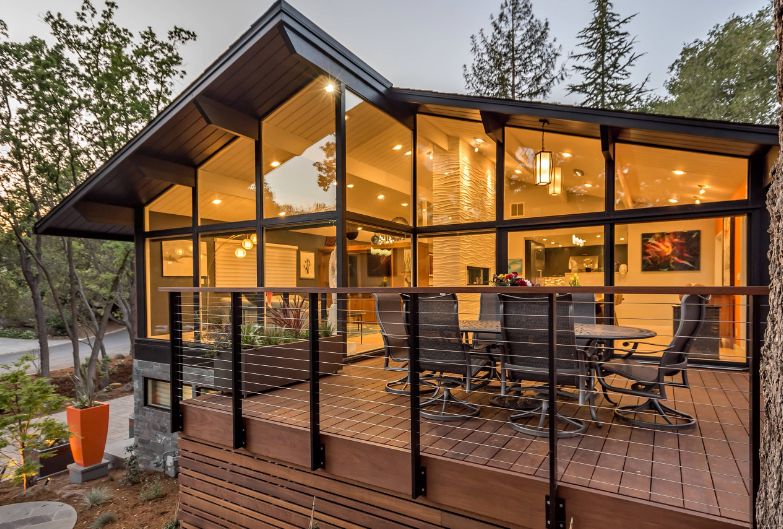 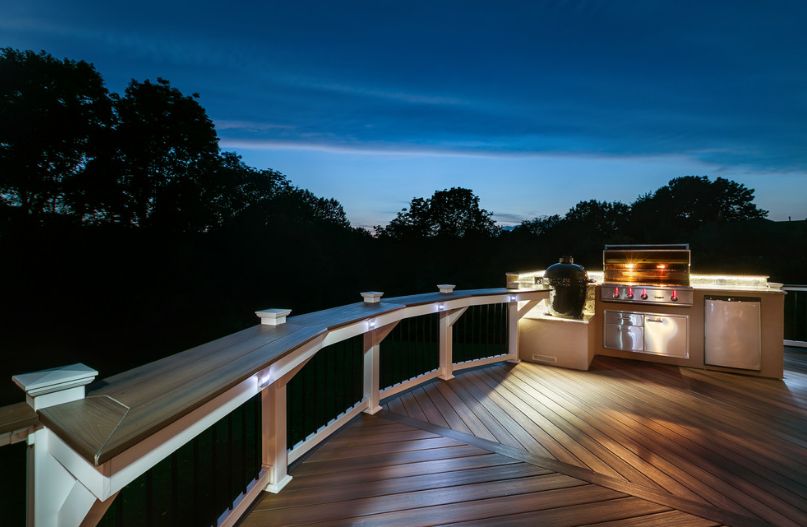 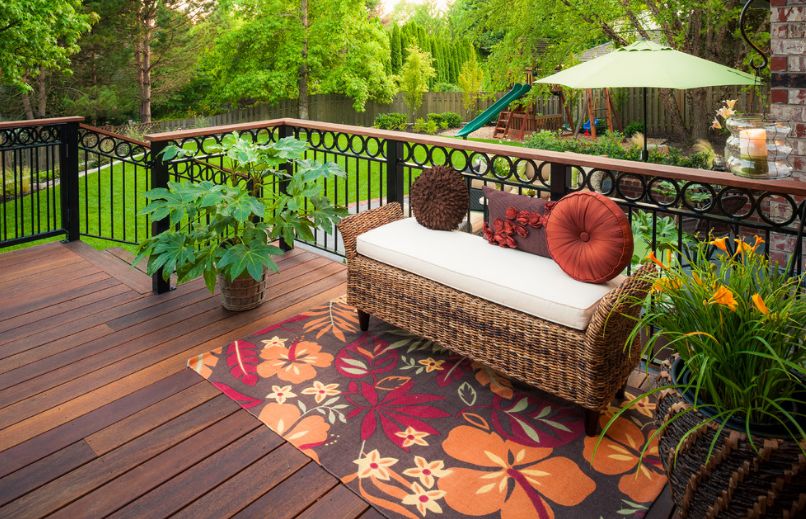 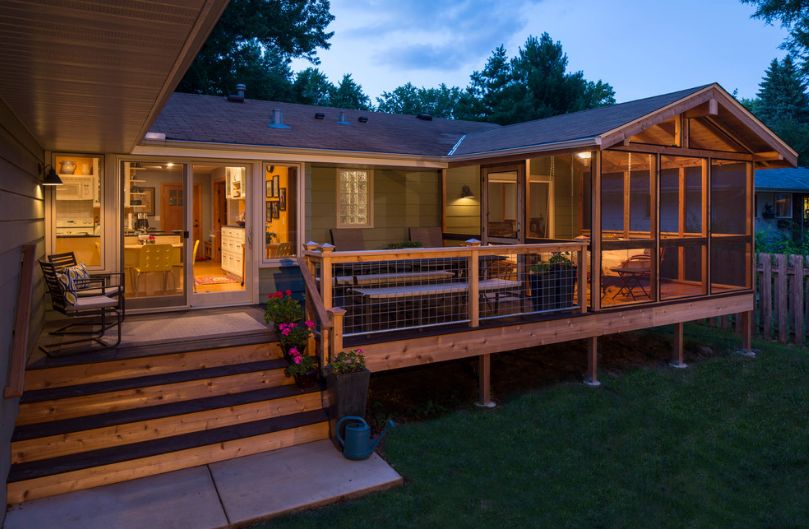 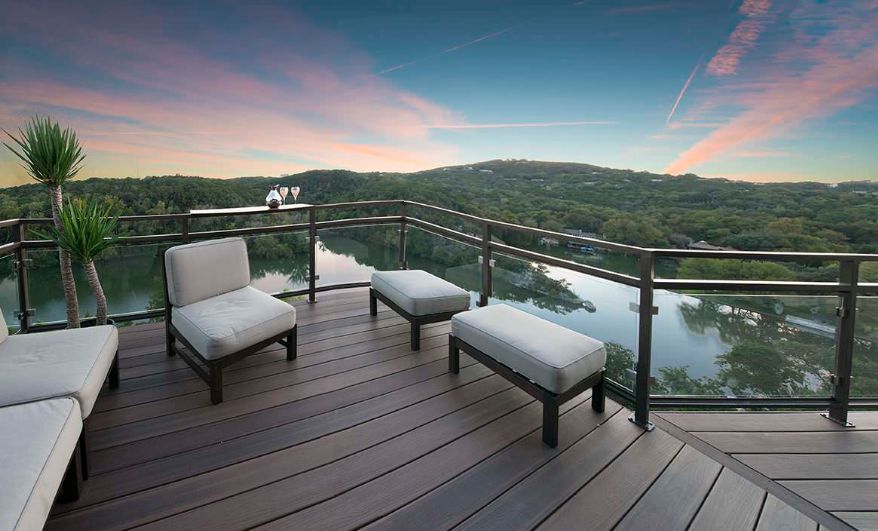 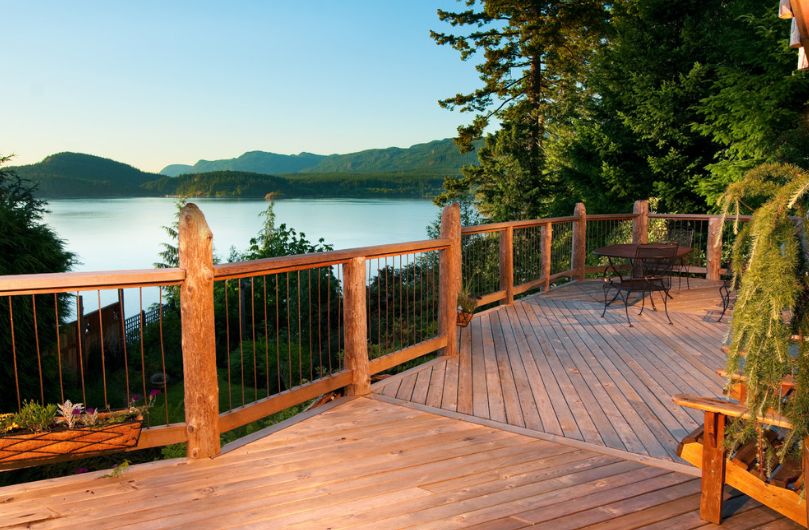 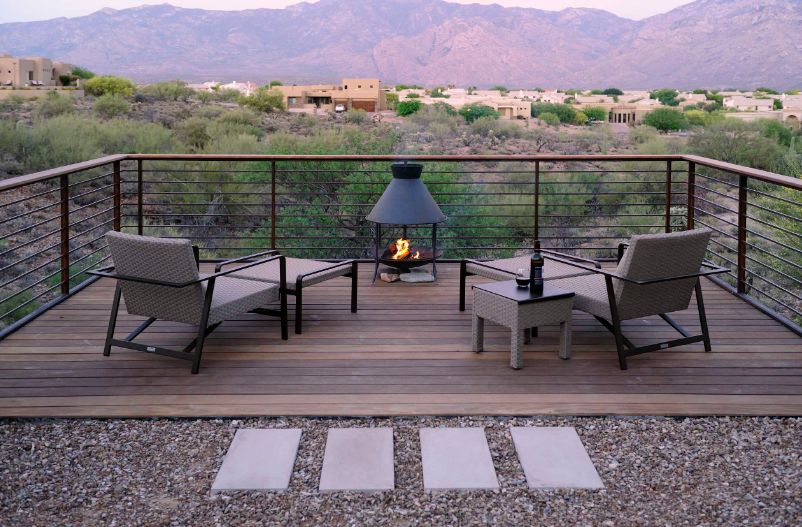 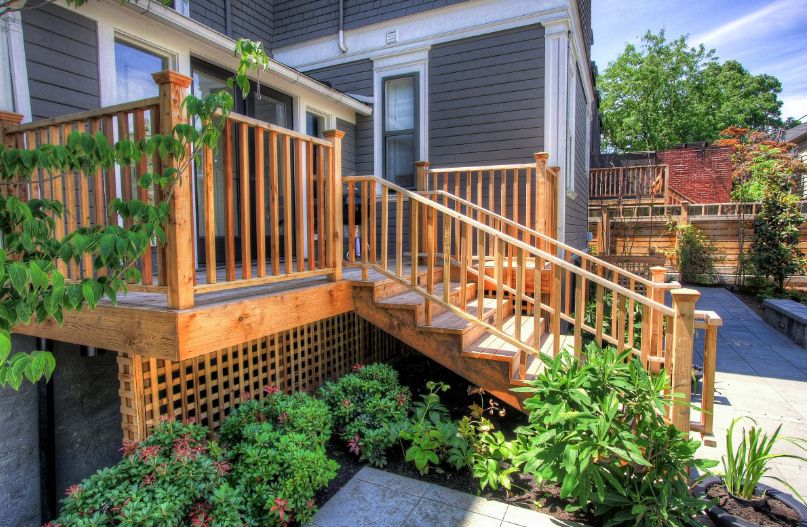 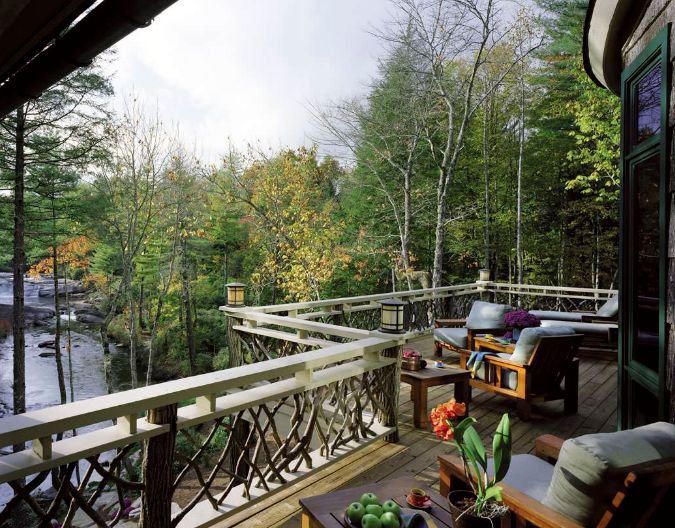 Decks, terraces, patios and balconies are more or less similar in the sense that they provide us with a place from where to enjoy beautiful views and where we can relax and socialize while enjoying the outdoors. But in order for everything to be just right, there has to be a harmonious connection between all the elements. The deck railing designs that such a space can adopt can greatly change the whole composition just like a staircase railing can become a focal point for the interior.

A deck railing made of wood has the ability of adding a rustic touch to a deck. The overall look also depends on the type of flooring, the color and the actual design.

The design of the deck railings needs to be in sync with the surroundings and the views. A small deck overlooking a garden doesn’t need railing barriers but rather a smooth and seamless connection to its surroundings.

The combination of wire mesh and wood posts is common when it comes to deck railings. It’s a combo that adapts well to a variety of styles and can suit both modern and traditional homes.

We find this sun deck to be very charming and that’s partially due to the way the deck railing follows the curved edge of the deck floor and matches the pattern featured by the facade of the residence.

When the view form the deck is as wonderful and mesmerizing as this one, you want to be able to enjoy it without barriers. So the deck railing needs to be as simple as possible in order to not obstruct the view.

In the case of this mid-century modern home, the deck railing actually maintains a feeling a=of openness established by the glazed facade. The design is obviously sturdy and elegant but also subtle.{found on ammiratoconstruction}.

A more robust deck railing design can be used when privacy is a concern. The railing can form a privacy fence around the deck, sheltering it from the elements and unwanted eyes. Another way to gain privacy on a deck is with large planters or potted flowers that cover the railings completely.{found on fiberondecking}.

When wood is combined with metal, the result is often visually striking and well-grounded. This deck is a lovely example, the metal railing topped with wood gives this traditional deck a bohemian look.{found on paradiserestored}.

Traditional decks are not usually very focused on emphasizing the views and their railings are not designed to blur the barrier between the deck and its surroundings. They also tend to be less space-efficient than modern designs.

Clear glass or acrylic deck railings are excellent for situations when a panoramic view needs to be highlighted and fully enjoyed. Metal posts form a frame around the clear panels, making them seem less fragile.

Wood deck railings are usually a characteristic of a traditional design. The material is also widely used for rustic designs and is often a part of modern and contemporary ones as well, being appreciated for its warmth and texture.

The railings of a contemporary desk are slim and not as robust or bulky as those that define traditional and rustic decks. They open up the deck to its surroundings and the views.

Entirely built of wood, this deck is a nice match for the traditional house it complements. The lattice skirt is a nice feature that completes the simple look and makes it just a bit more interesting.

This is a nice look for a rustic deck. The railing is actually one of the focal points of the whole design which in a way seems to have been inspired by nature and the surroundings.{found on forer}.