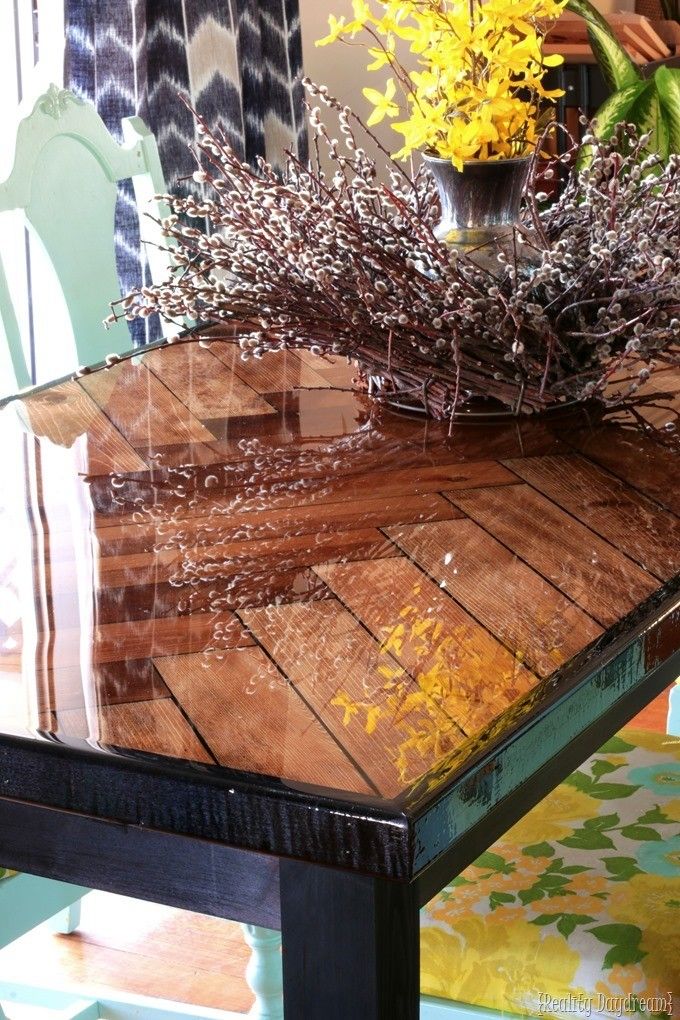 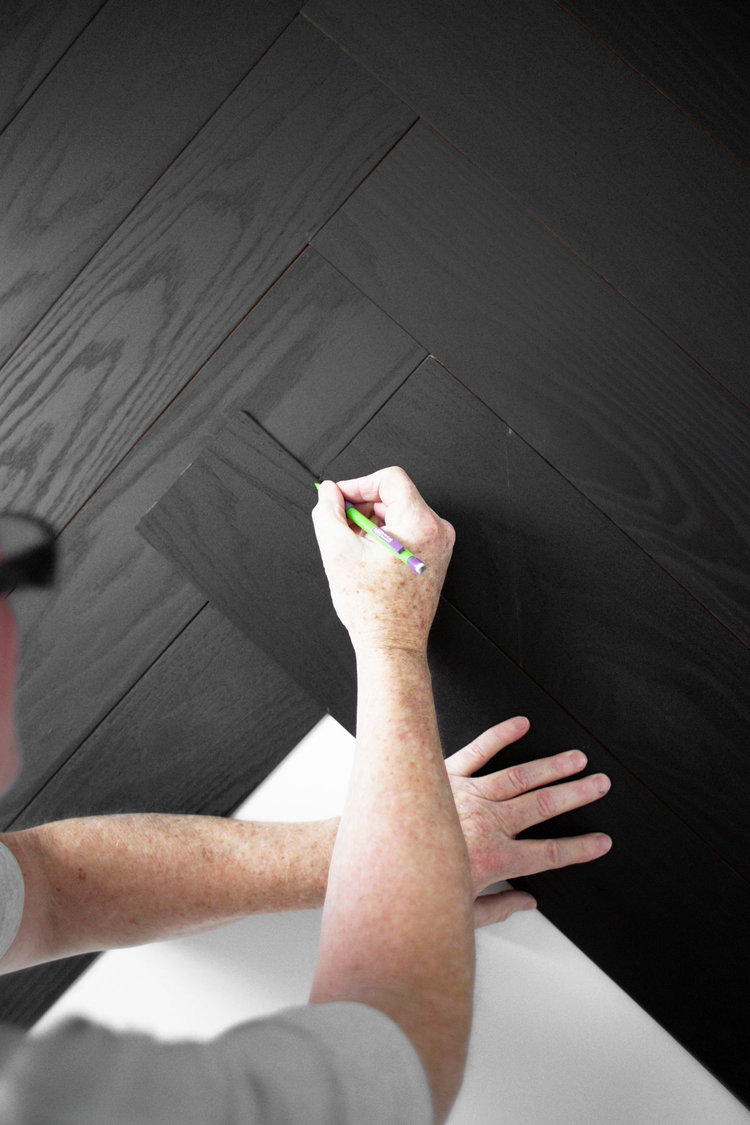 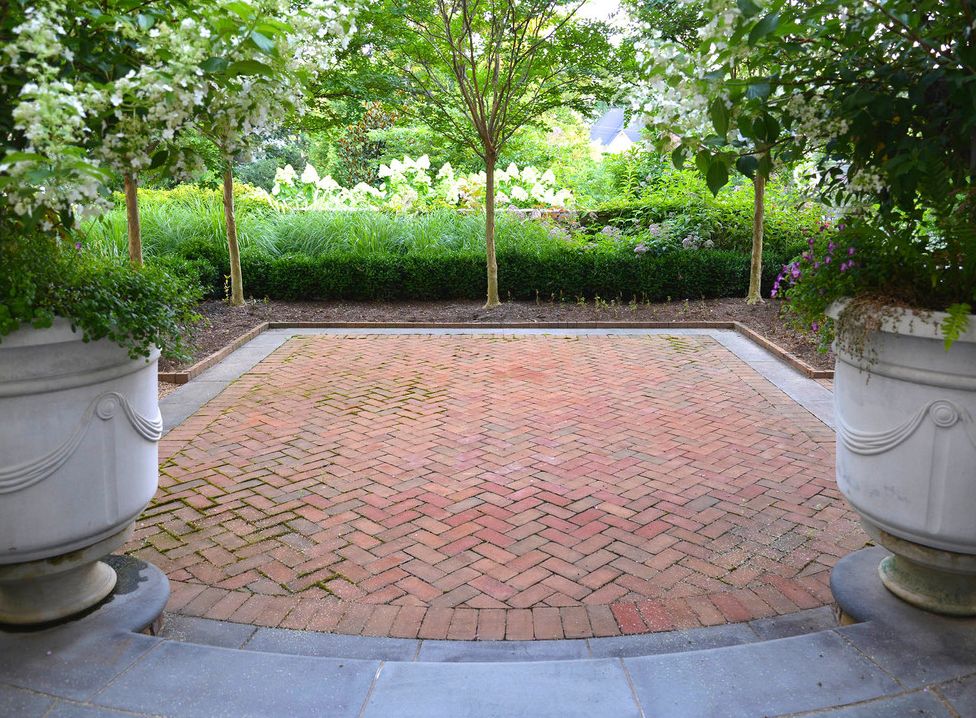 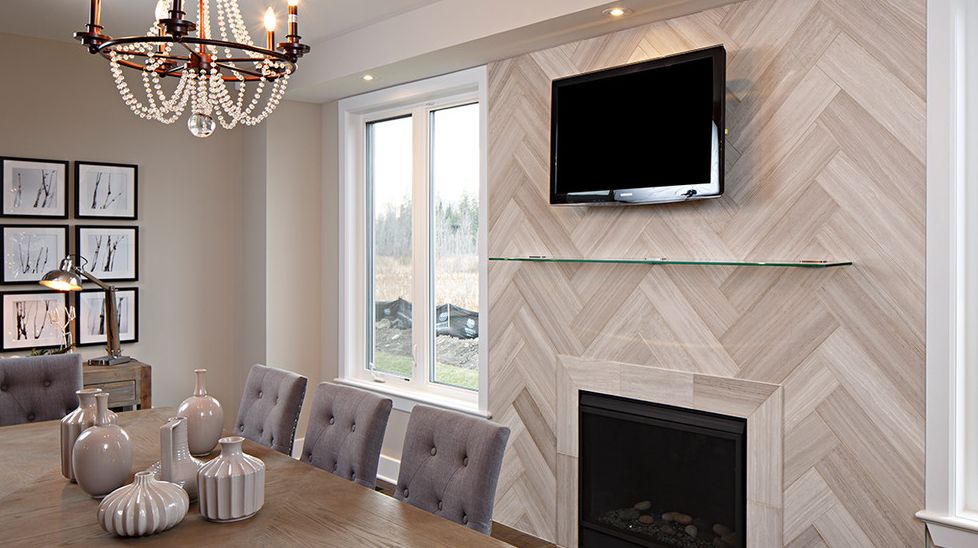 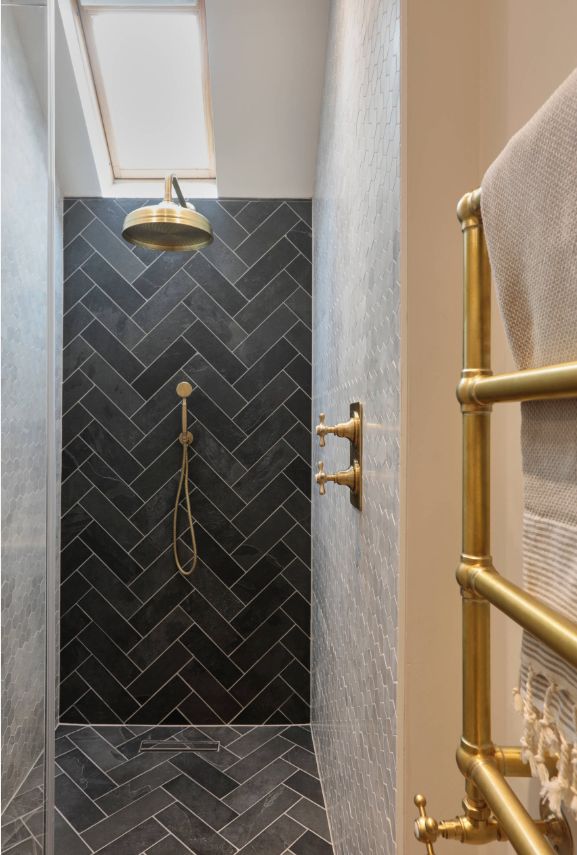 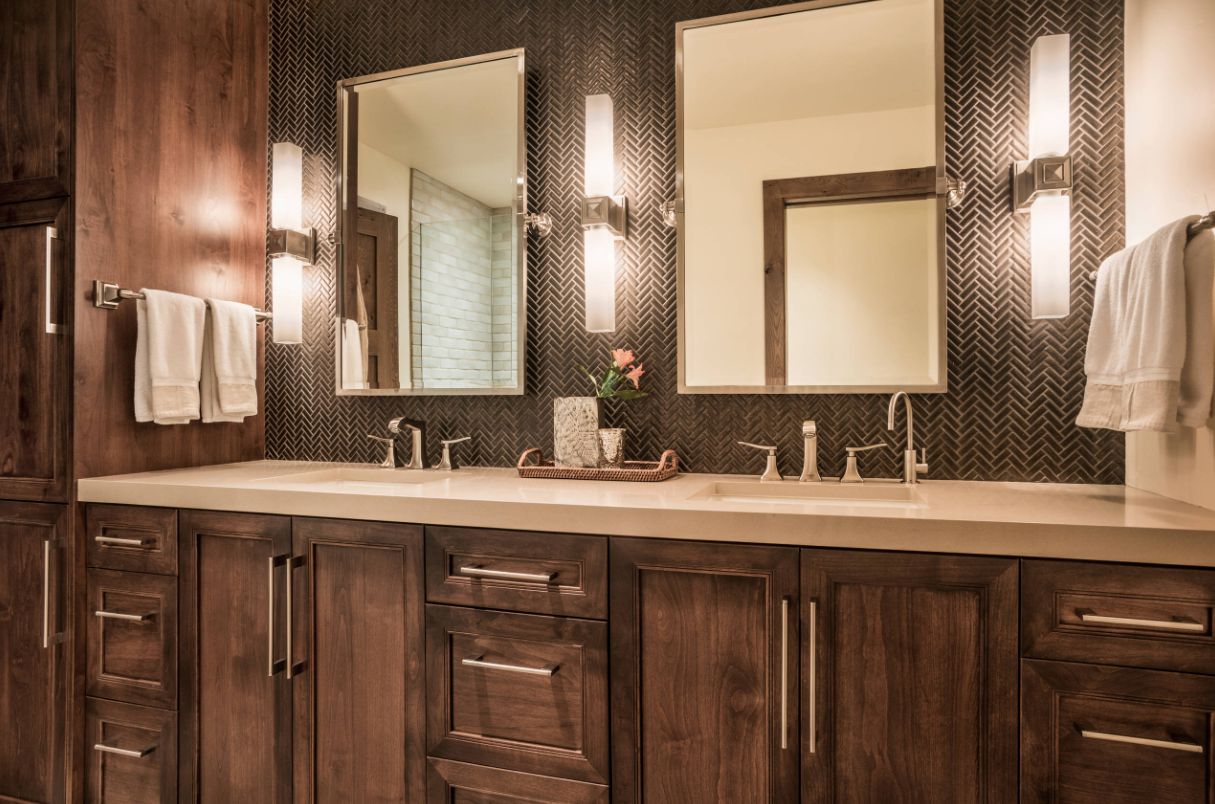 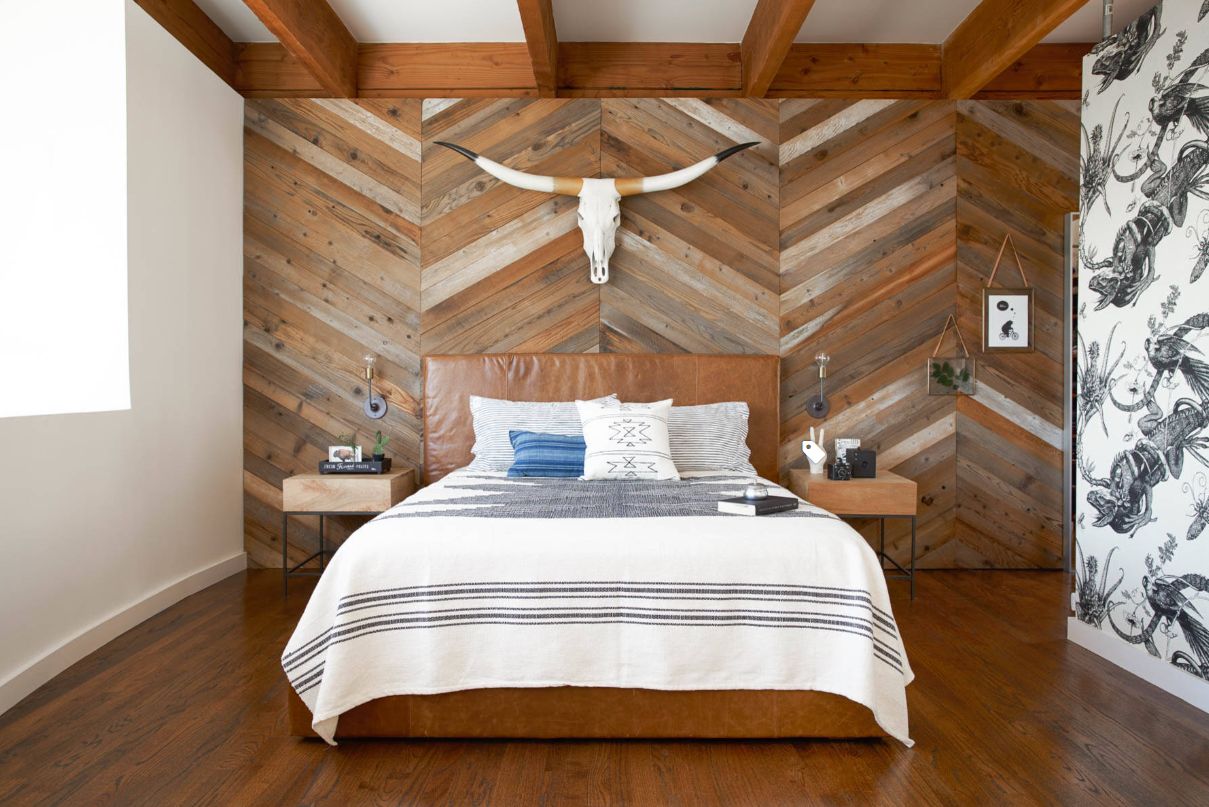 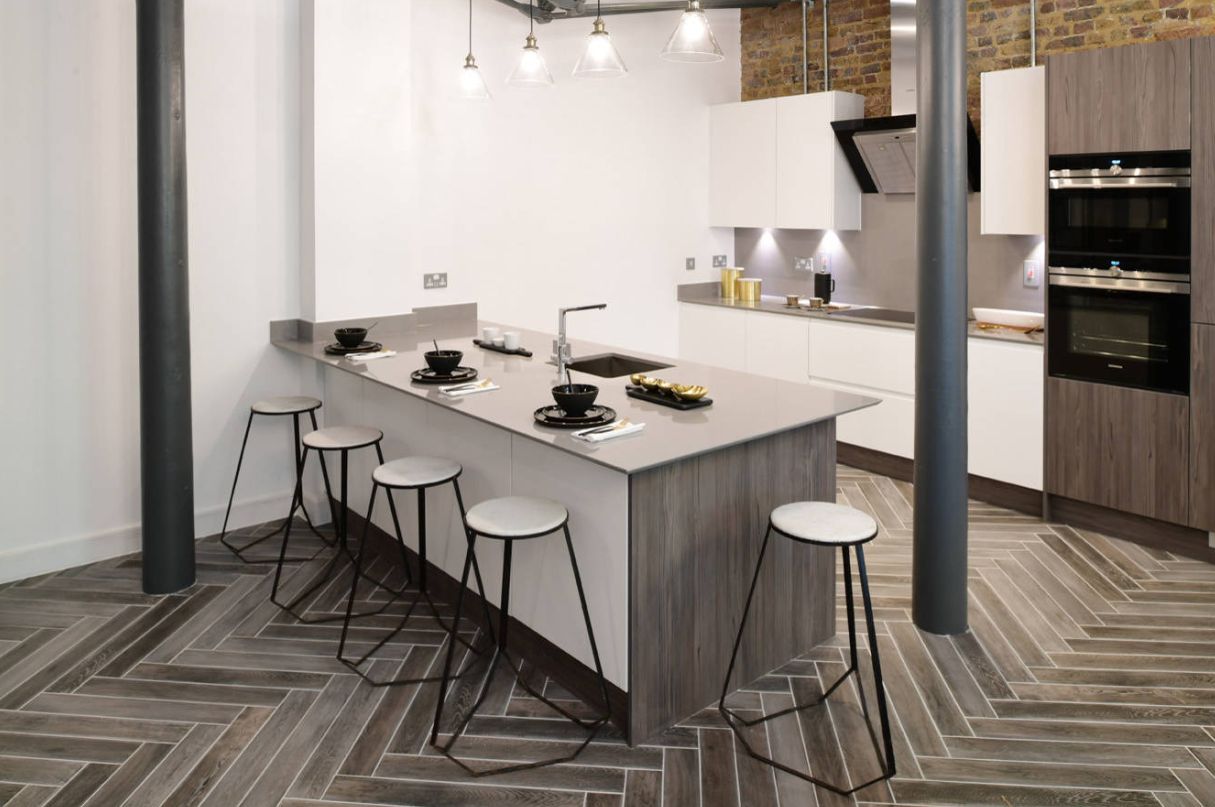 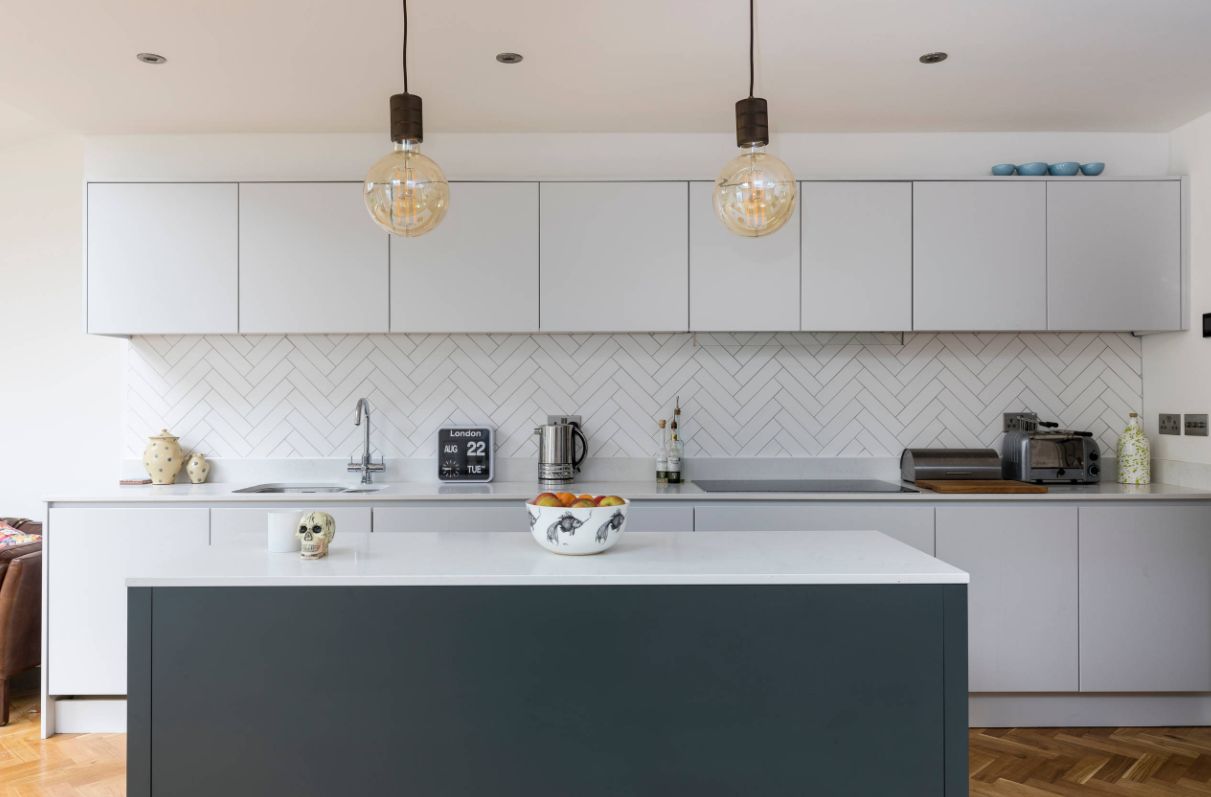 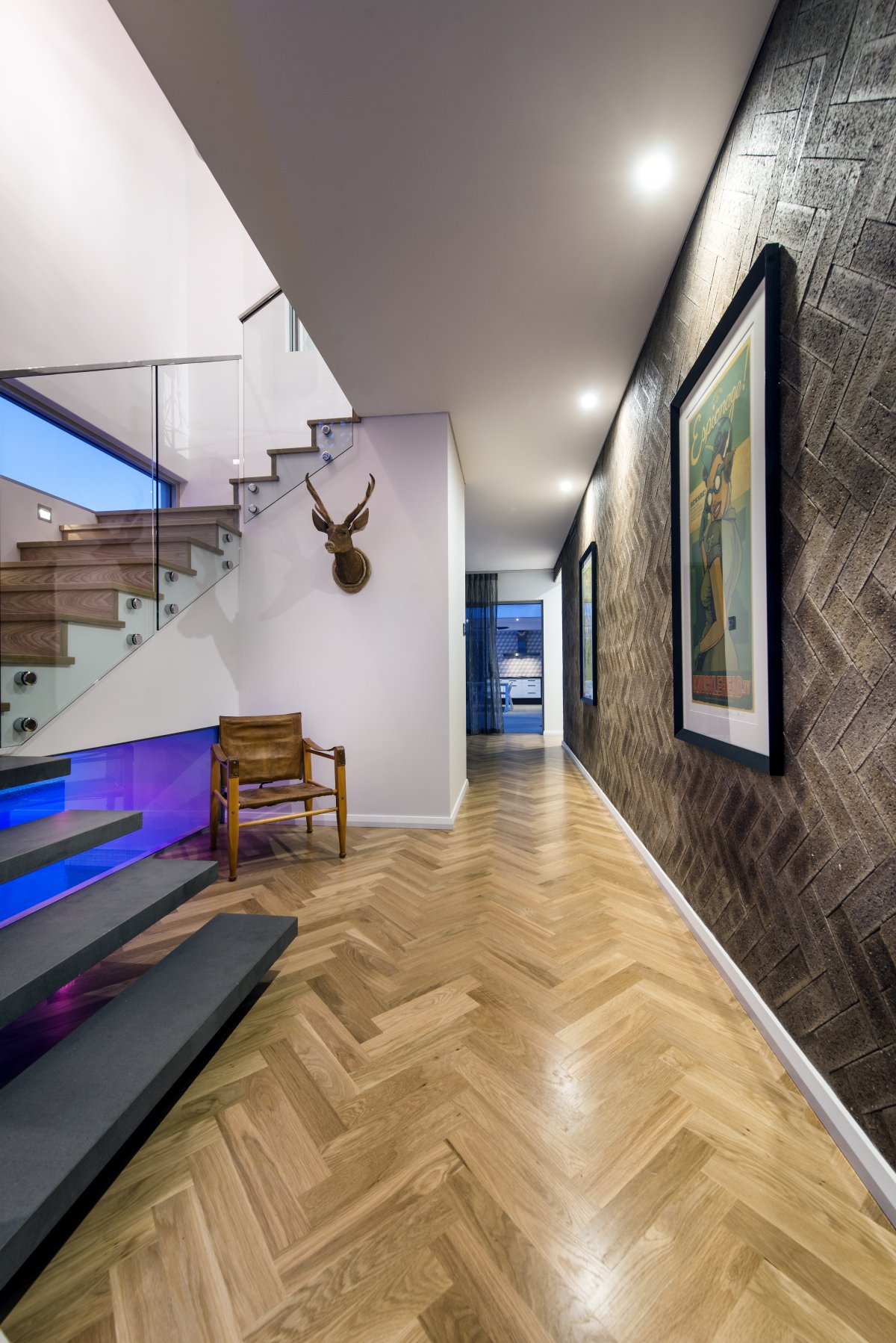 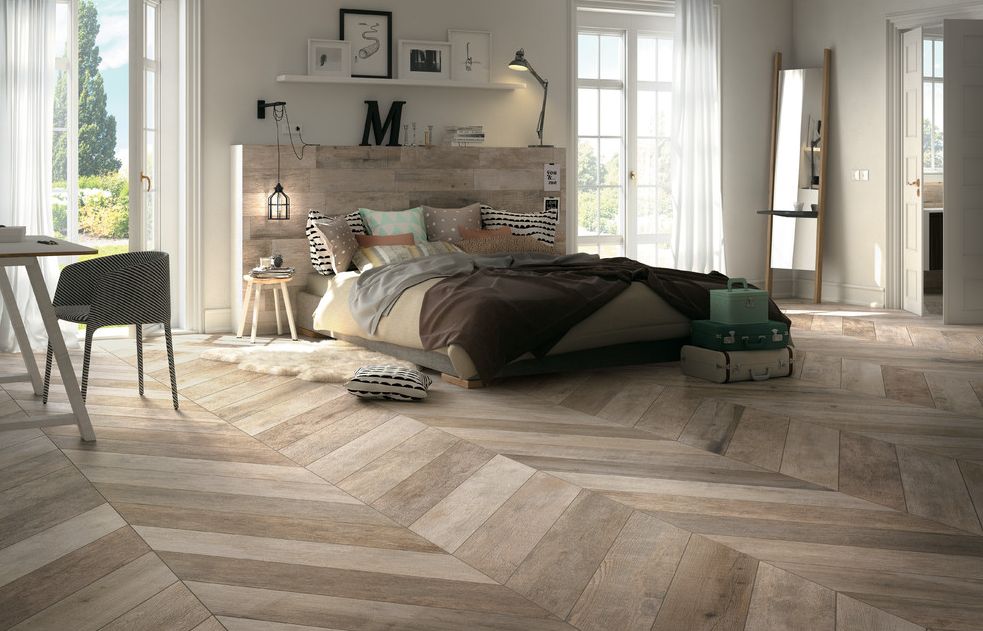 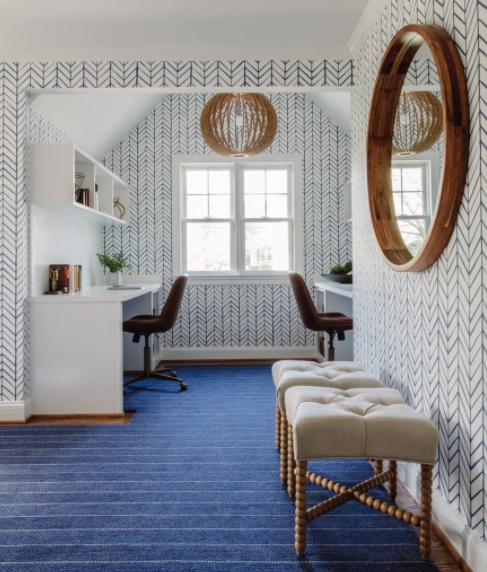 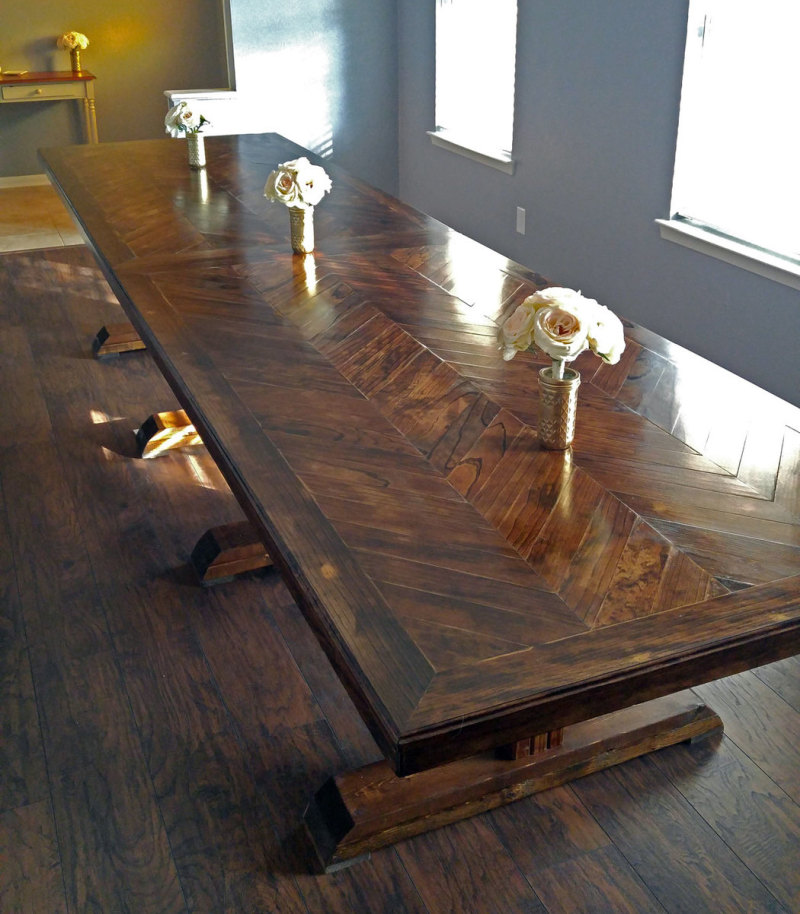 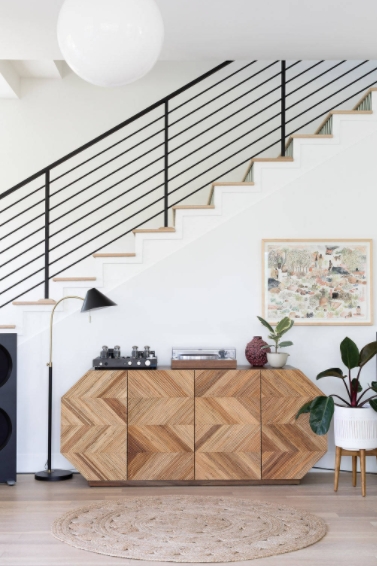 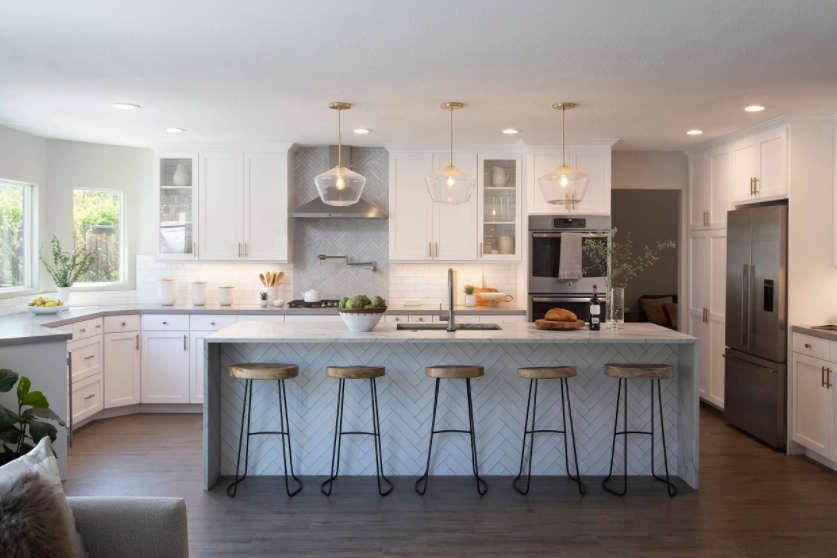 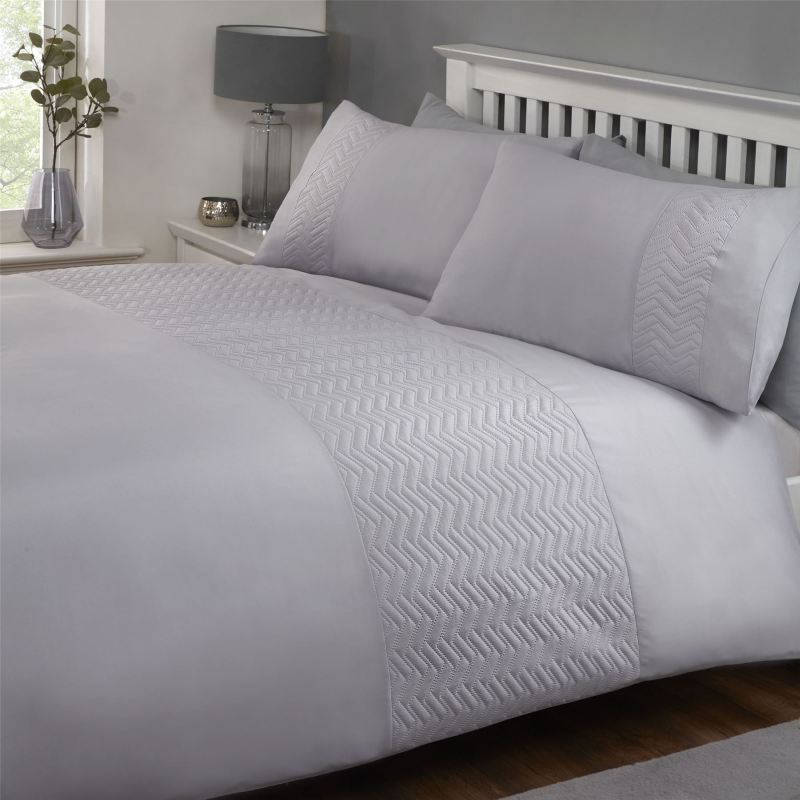 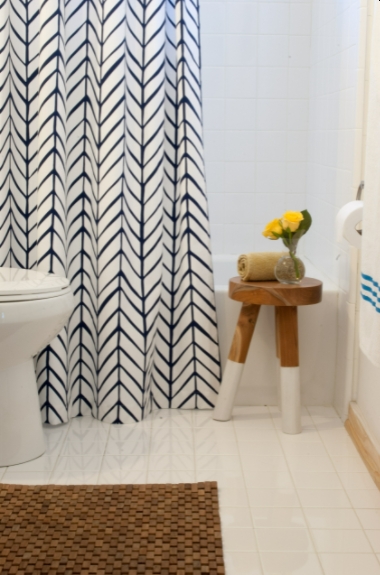 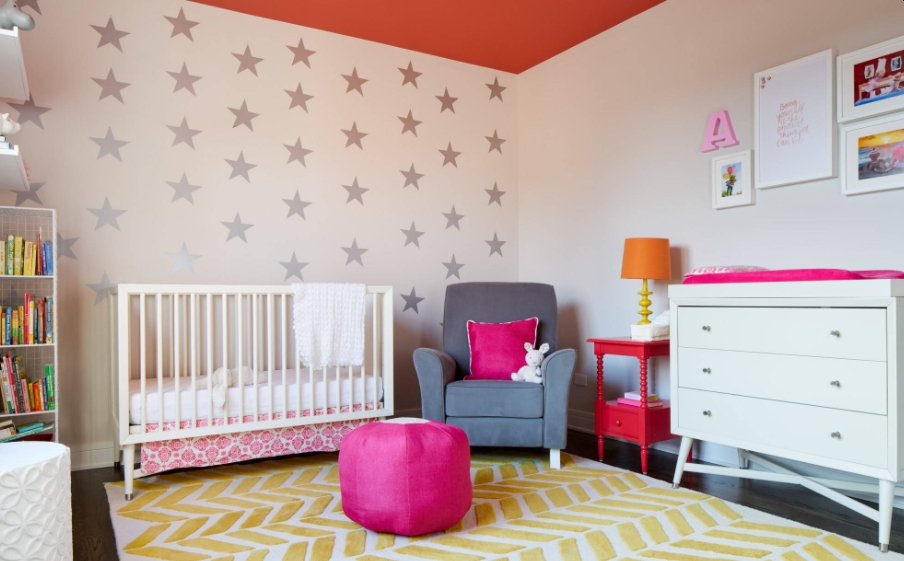 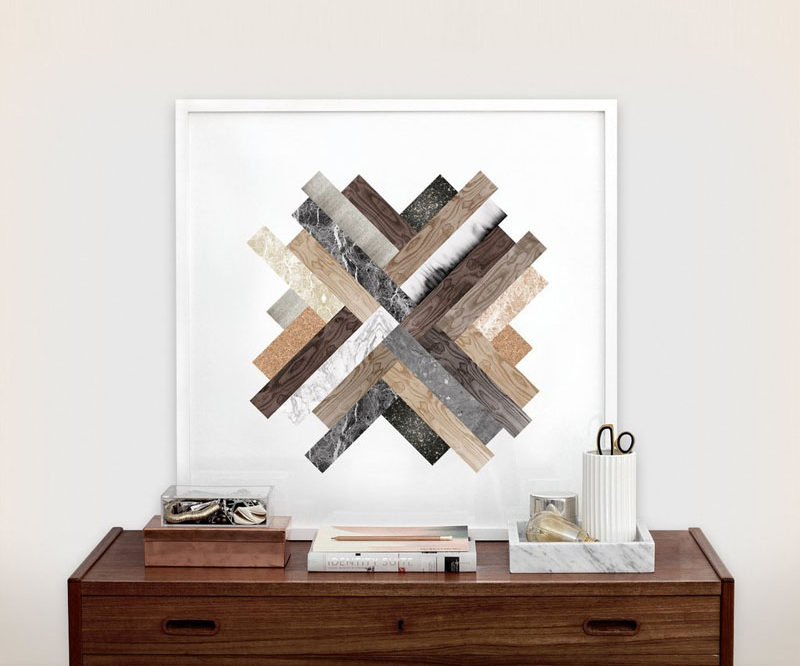 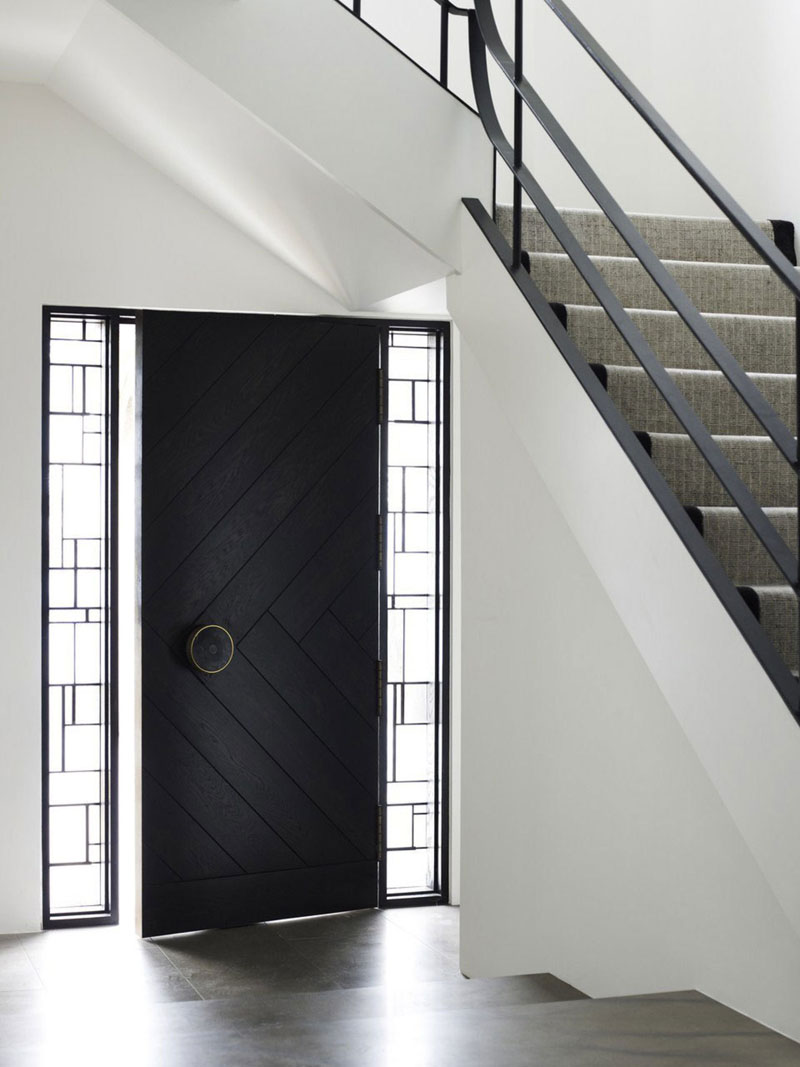 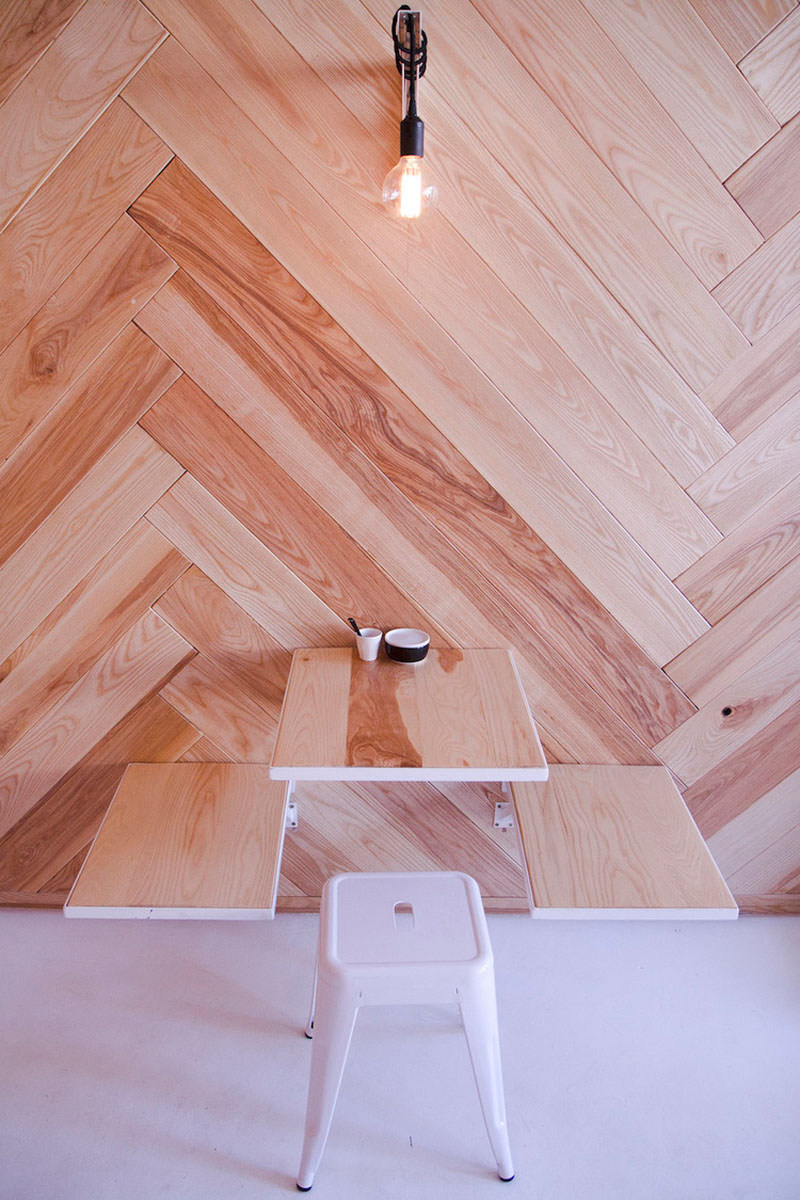 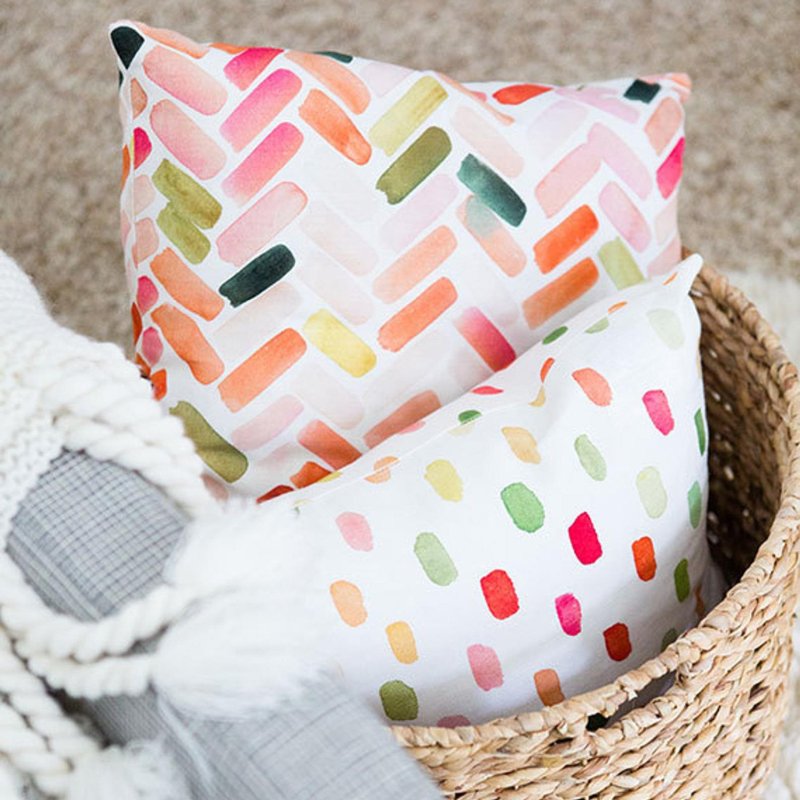 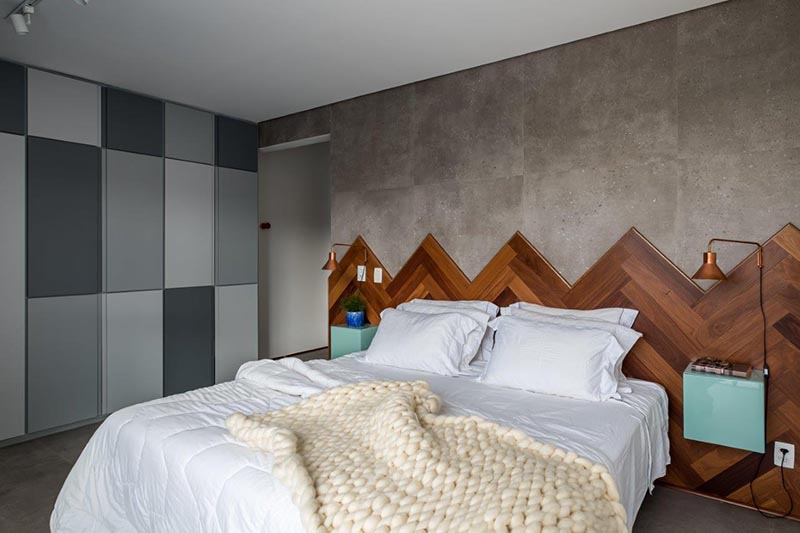 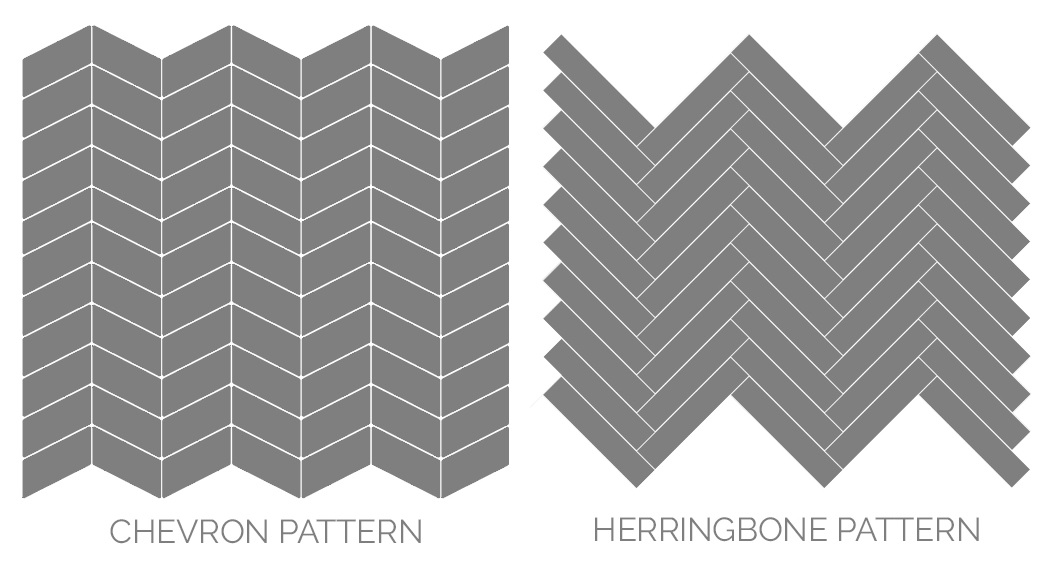 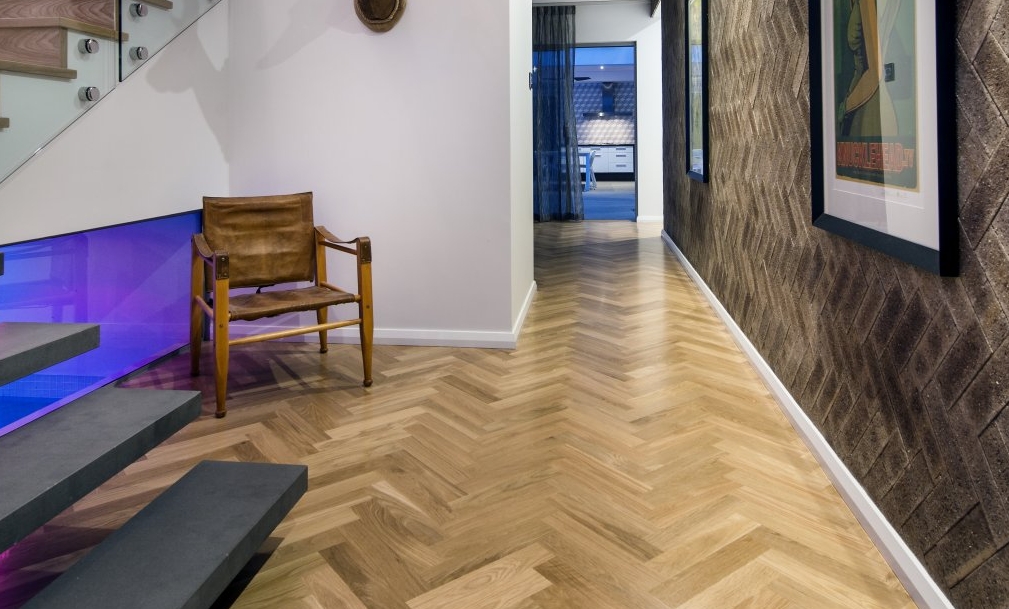 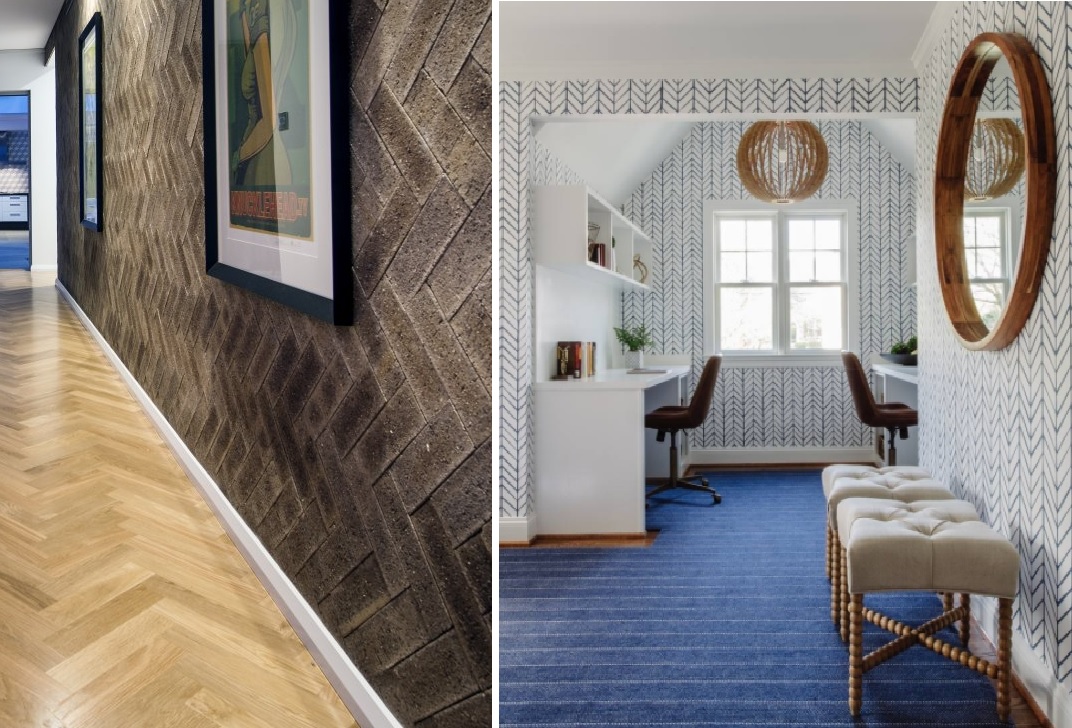 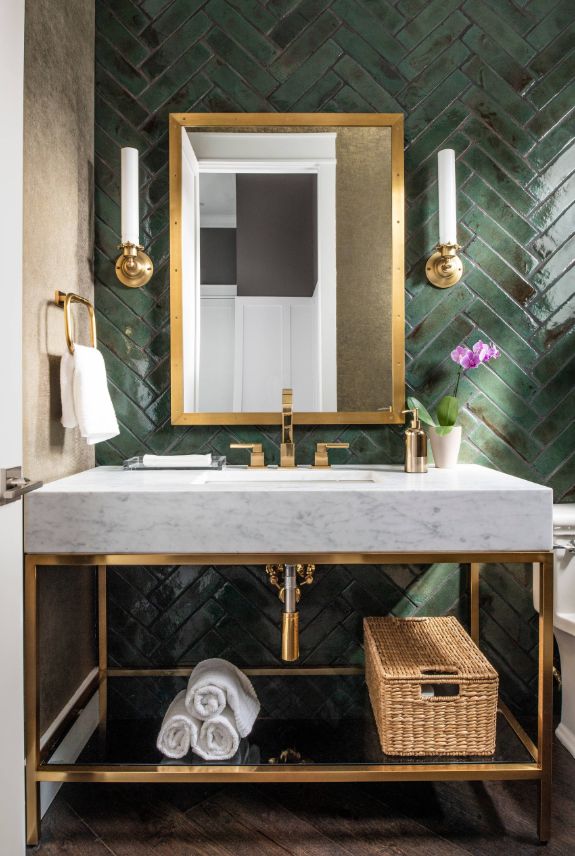 Herringbone pattern doesn’t need an introduction. Interior designers have championed the pattern for over five centuries. What else needs to be said?

To say that floor and wall patterns aren’t important would be the same as explaining to a dolphin that they didn’t need water. A 2021 study published by the National Library of Medicine (NIH) said, “understanding of the human-environment interaction could contribute to informing design strategies in ways to optimize psychological well-being and mental health.” And there you have it, interior design impacts your life.

If you don’t know much about the herringbone pattern, you will when we’ve finished here. The versatility of this classic pattern is not limited to flooring or a specific style.

The herringbone pattern has already proven to be a timeless classic. However, the exciting thing about it is how it’s still evolving. We will explore a series inspiring ideas that could change the way you perceive this simple pattern.

What Is Herringbone Pattern?

Herringbone pattern is a design consisting of equal size rectangles. The shapes are pieced together to create a zig-zag pattern. To achieve a staggered look, herringbone requires precision cutting so the rectangular pieces can fit together.

How Did Herringbone Pattern Get Its Name?

Herringbone resembles the skeletal structure of a herring. A herring is a fish species. When the fish is small, it’s a sardine, and when fully grown, it’s a herring. In the fashion world, herringbone pattern jacket would be labeled as a twill garment.

Where Is The Herringbone Pattern Applied?

Herringbone is a common floor pattern. The flooring is made of rectangular shapes, so cutting it into a herringbone pattern isn’t an issue.

Where Can You Find Herringbone Floor Patterns?

Herringbone and chevron patterns are often confused as they feature rectangular patterns. The difference between the patterns is how they are used.

A chevron pattern is created with rectangle tiles placed at 90-degree angles with one another, forming a V-shaped pattern. The pieces used to make the pattern are cut at an angle so they can fit in a V-pattern.

Engineered hardwood herringbone, for example, features rectangles pieced together to create a cohesive look. The way this design appears in tiles is more of a classic look. With chevron, the pattern is used to establish a more modern feel homes.

Selected by our team of international experts, here are a few modern examples of how the herringbone pattern is used in interior design.

Luxury vinyl plank herringbone can be applied however you desire. In this example, it serves as a backdrop and focal point of the bedroom. The headboard anchors the bed while adding a new dimension.

Designed by SP Estúdio Office, the headboard was easy to add. The piece covers the width of the concrete wall, thus creating a dynamic room element and additional layer of warmth.

Pillows are a quick way to add the herringbone pattern to a room and these designs by Yao Cheng are painterly and delightful. The pillow covers are an example of how herringbone can be soft and gentle.

Paneling the wall does not mean the planks need to be installed vertically or horizontally. Herringbone wood paneling, like this example, is from Lucky Pony, and gives space a different vibe.

It’s a modern, upgraded take on your grandmother’s wood paneling and a more interesting twist than shiplap, which is becoming overdone.

We put a lot of focus on how the front door looks from the outside, but how about from the inside? Paneling the interior of an entry door with the herringbone design gives it texture and a very high-end style.

It might not be the first thing that you think of when considering this classic pattern, but herringbone artwork is an option. Multimedia or mosaic works – or even paintings – feature this graphic style.

This Herringbone Fusion Art Print by Kristina Krogh has a contemporary feel that will work in many home décor styles.

Adding this classic pattern to a room with a rug can be a dramatic – or subtle addition. Here, a child’s nursery by Lugbill Design gets visual boost from the contrasting color pattern.

Elevate a basic bathroom with a stylish herringbone shower curtain. Changing to a graphic pattern like this one adds some pizzazz to the space without necessarily adding another color if you don’t want it. It makes an eye-catching and fresh focal point, whether the bathroom is big or small.

For those who prefer a more neutral bedroom palette, this type of herringbone design adds texture and interest without introducing another color or bolder graphic style. It’s also a versatile way to add this pattern to a room that already has a lot of colors or patterns.

Mention using the herringbone design in a kitchen and immediately thoughts jump to the floor or the backsplash, but there are other options too.

This California kitchen by Berg Construction features an island that is elevated by the classic pattern on the front of the base – an area that is often overlooked since the stools sit in front of it. That said, you can see here how the subtle pattern is a small detail that makes a big difference.

Swapping out a plain credenza or cabinet for one that features a herringbone front is another way to put this pattern on display. Made from natural wood, the cabinet really highlights the pattern when placed in a mostly white and clean-lined home décor style.

This is perfect for interiors that feature modern farmhouse or transitional elements. Styling of this space is by Taylor Jacobson Interior Design.

A fabulous wood dining table is certainly a centerpiece so it’s also a wonderful way to incorporate – and show off – a herringbone pattern. The wood sections and the grain help highlight the pattern and it adds interest to a basic table.

A quality wood table like this one by Ana White is bound to become a family heirloom and one that features herringbone will be extra special.

Fans of the herringbone pattern can add wallpaper to feature this graphic element as in this office by Imagine Design. Whether you create an accent wall with herringbone wallpaper or use it for the whole room, you can go bold or muted.

Here are a few examples of herringbone floor patterns.

Far from being outdated, herringbone floors are a great option for modern and contemporary spaces where they are capable of creating a warm, inviting, and comfortable atmosphere to complement the otherwise simple and bare white walls and ceilings that often define such spaces.

A nice example is this residence designed by Residential Attitudes near Perth, Australia.

Herringbone backsplashes are almost as popular as the flooring style we just mentioned. They have a classic and elegant look and they’re timeless. Check out this contemporary kitchen and its chic and airy look created by Design Squared. It’s simple without being monotonous and that’s a perfect combo.

Herringbone flooring is popular in living rooms and bedrooms, but that doesn’t mean you’re limited. Check out these porcelain tiles that mimic wood from Minoli, they’re just what a kitchen needs.

You can add the same warmth and comfort that herringbone floors offer to a room but in a different form by changing the strategy. One idea is to create a wood-paneled accent wall using boards arranged in a herringbone pattern, as demonstrated here by Studio Revolution.

Bathroom tiles arranged in this classic pattern can look beautiful. There are many variations to consider, so take your time before you choose a style. In this case, the proportions highlight the pattern and the color fits with this style.

A herringbone pattern tile backsplash will enhance your bathroom space. If you want chic harmony, then here is your answer. The tiles are practical, moisture-resistant, easy to clean, and look great. A nice example is this powder room completed by John McClain Design.

Since you have to install tiles in the shower any way you might as well arrange them in a nice-looking pattern. You can keep things simple without making your design look boring if you opt for herringbone shower tiles.

You can create a continuous, uniform look that will make the space appear bigger. Let this design by Cherie Lee Interiors inspire you.

Apply the herringbone design when installing a fireplace tile surround. You can choose tiles that mimic the look of wood to create a warm and cozy look but you can also play with other interesting combinations and even mix and match various colors.

The versatility of this pattern lets you take it outside where you can create a nice patio using paver bricks or tiles that can be arranged in all sorts of cool patterns, including this one.

Some projects require professional help, while some are fun DIY tasks. For example, installing a herringbone accent wall is well within your skill set. You can find out all the details along with instructions and tips in the tutorial shared on kristimurphy.

How cool is this herringbone table? It also serves as an example of how herringbone patterns can be applied to anything, including interior decor. If you like this, check out realitydaydream to learn more.

How To Keep Herringbone Pattern Straight

A herringbone pattern will only look nice if it is straight. Generally, if you start with one of the tiles at a 45-degree angle, and lay tiles along a drawn centerline, you should have no problem keeping the pattern straight.

Just ensure you lay out the project first. This way you can double-check that the tiles are straight.Adjust the pattern so it begins at the brick boundary and make it straight before you use adhesive.

Can You Lay Laminate Flooring in a Herringbone Pattern?

Yes, it is very simple to lay laminate flooring in this classic pattern. Start by cutting the pieces into rectangles, laying them down without adhesive to be sure they fit. Once you have laid the entire floor and are sure it looks how you want it to, go back and cement the tiles.

What Style is Herringbone Pattern?

The herringbone pattern is considered to be within the classic style, but there are ways to incorporate it into a modern home.

Can You Lay Vinyl Flooring in a Herringbone Pattern?

Creating the herringbone design with vinyl flooring is possible and very easy to do. Simply cut all the vinyl flooring into rectangles, and lay the floor out without adhesive. When you are sure you have the look you like, and the floor is completely covered, you can go back and use adhesive to set the tiles.

What Size Tile is Best for Herringbone Pattern?

When creating a herringbone pattern you will want to use either 2×4 or 3×6 tiles. You can also try 2×8 tiles however if you are feeling adventurous.

Should You Allow Extra Tile for a Herringbone Pattern?

Yes, it is a good idea to allow extra tile for any tile project, especially those which involve a pattern like a herringbone. Moreover, allowing extra tile ensures you won’t run out in the middle of your project, and that you will be able to cover the entire floor without a problem.

For the herringbone pattern, calculate how many tiles you need and add an additional 15%.

No matter you stack it, the herringbone pattern will always come out on top. The pattern precedes its reputation and can spice up any room you choose for your next remodel.